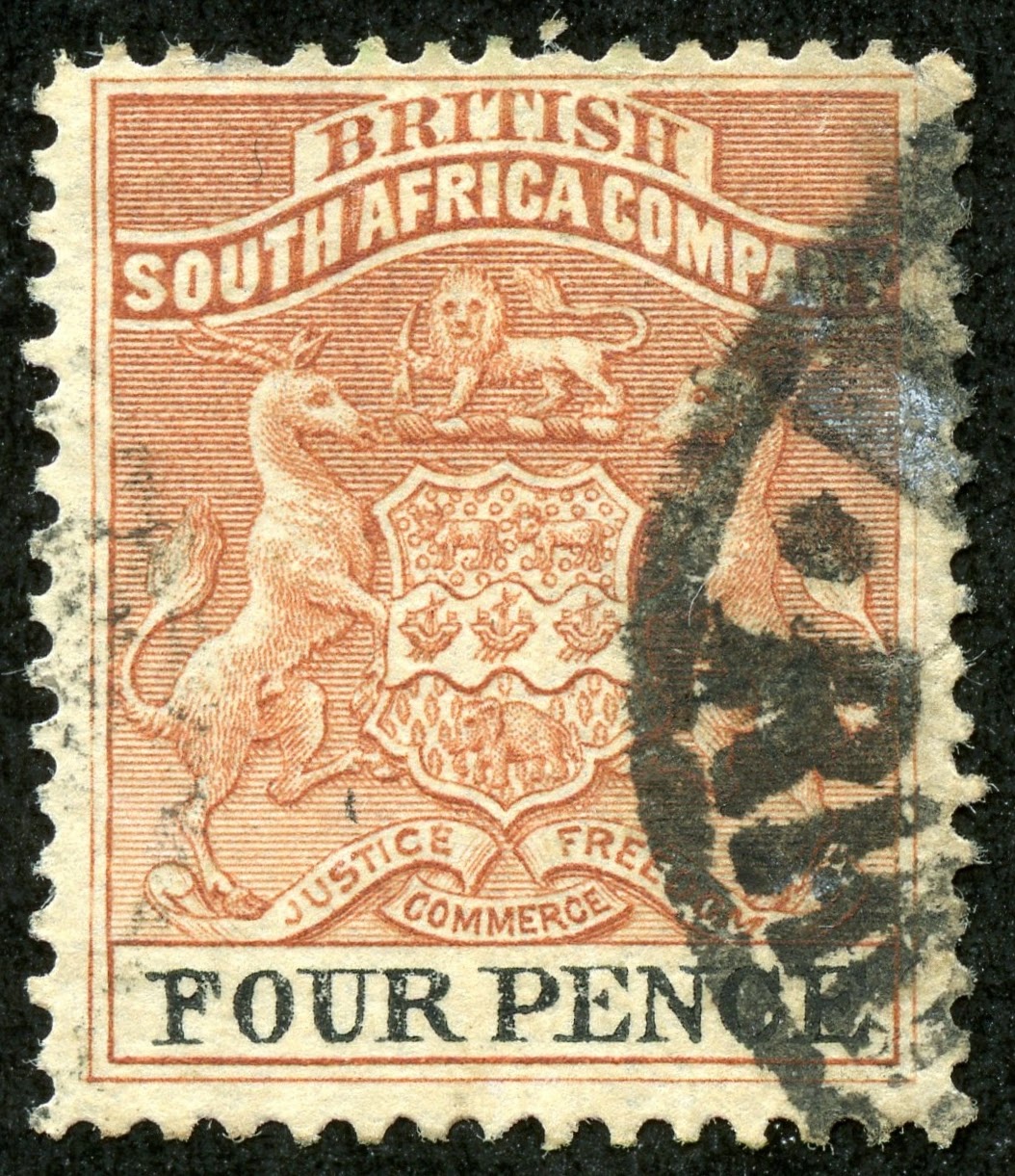 1891 Scott 5 4p red brown & black "Coat of Arms"
Quick History
"Rhodesia", commonly called by the white settlers in the 1890s after Cecil Rhodes, the founder of the British South Africa Company (BSAC), were lands in southern Africa bisected by the Zambezi River. The Company, which governed and administered the lands by Royal Charter from 1889-1923, named the territory north of the Zambezi "Northern Rhodesia", and the lands south of the Zambezi "Southern Rhodesia". 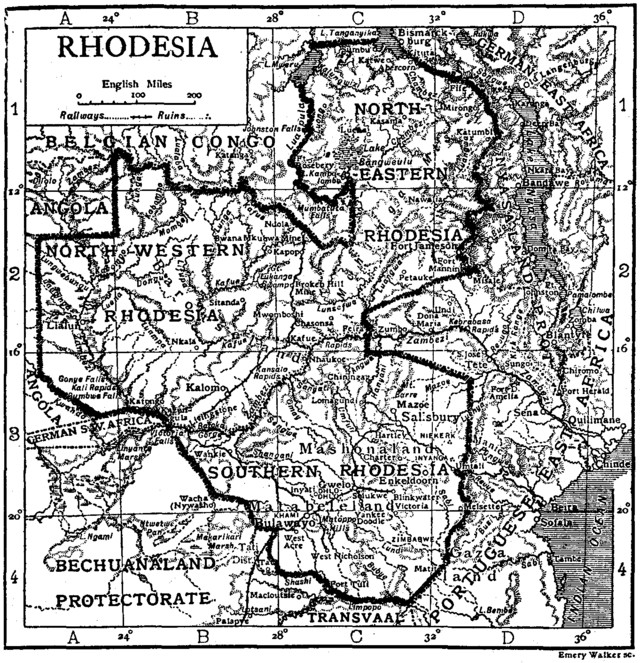 1911 Encylopaedia Britannia Map of Rhodesia
The Zambezi River bisects the lands into
Northern Rhodesia (North Western & North Eastern) & Southern Rhodesia
The capital was Salisbury, and the population was 1,700,000 in 1921.

The stamps issued throughout 1890-1923 are all inscribed "British South Africa Company". Beginning in 1909, the stamps are also either overprinted or inscribed "Rhodesia". 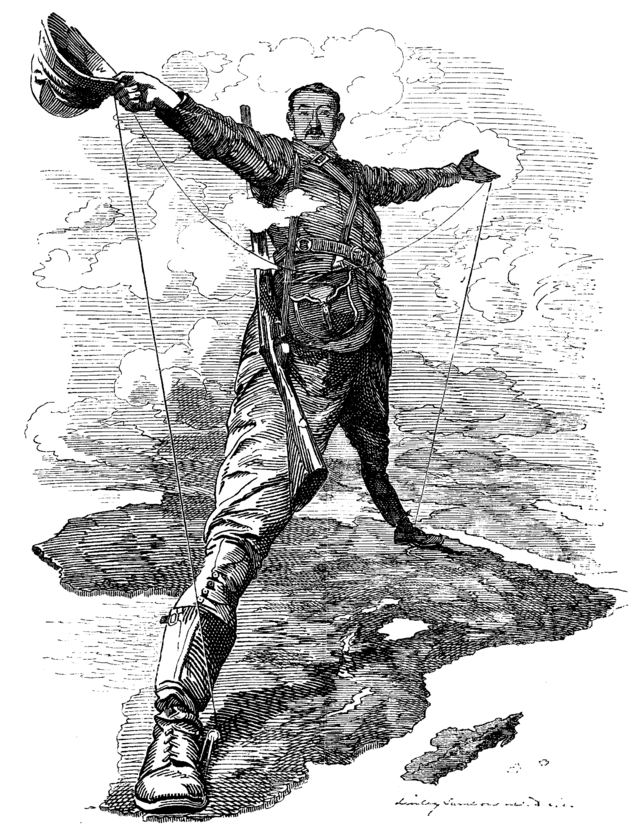 Cecil Rhodes as Colossus striding Africa from Cairo to the Cape
The BSAC were expecting that the gold fields of Mashonaland would provide the investor return, but that didn't pan out (pun intended ;-). But the BSAC did build railroads ( Beira, Mashonaland, Rhodesia lines), and actually retained mineral rights until 1964 in Northern Rhodesia (now Zambia).

Northern Rhodesia became a British Protectorate from 1924-1964. With independence in 1964, the name was changed to Zambia.

(My blog post for Northern Rhodesia has more maps and explanation of these turbulent times. ) 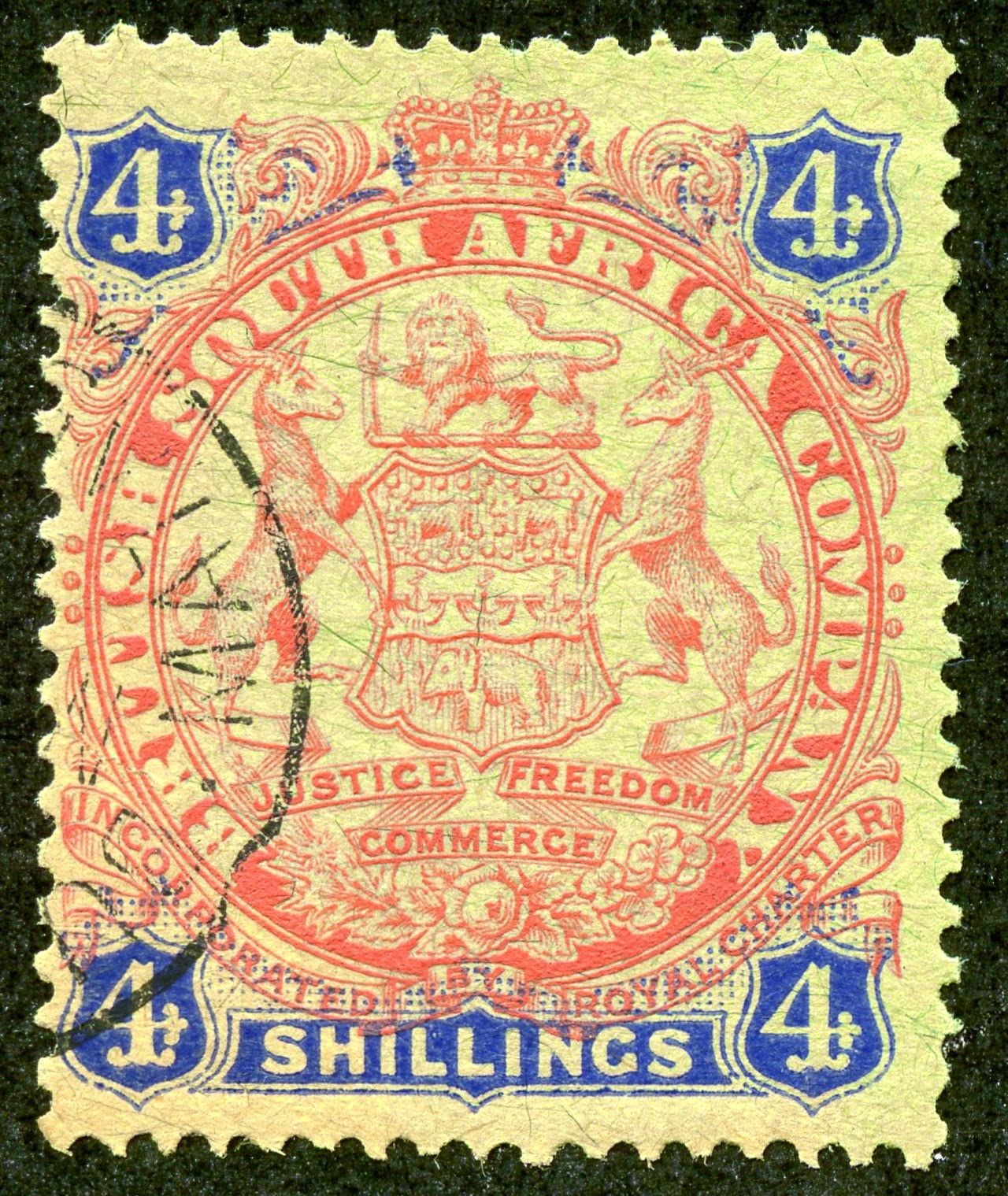 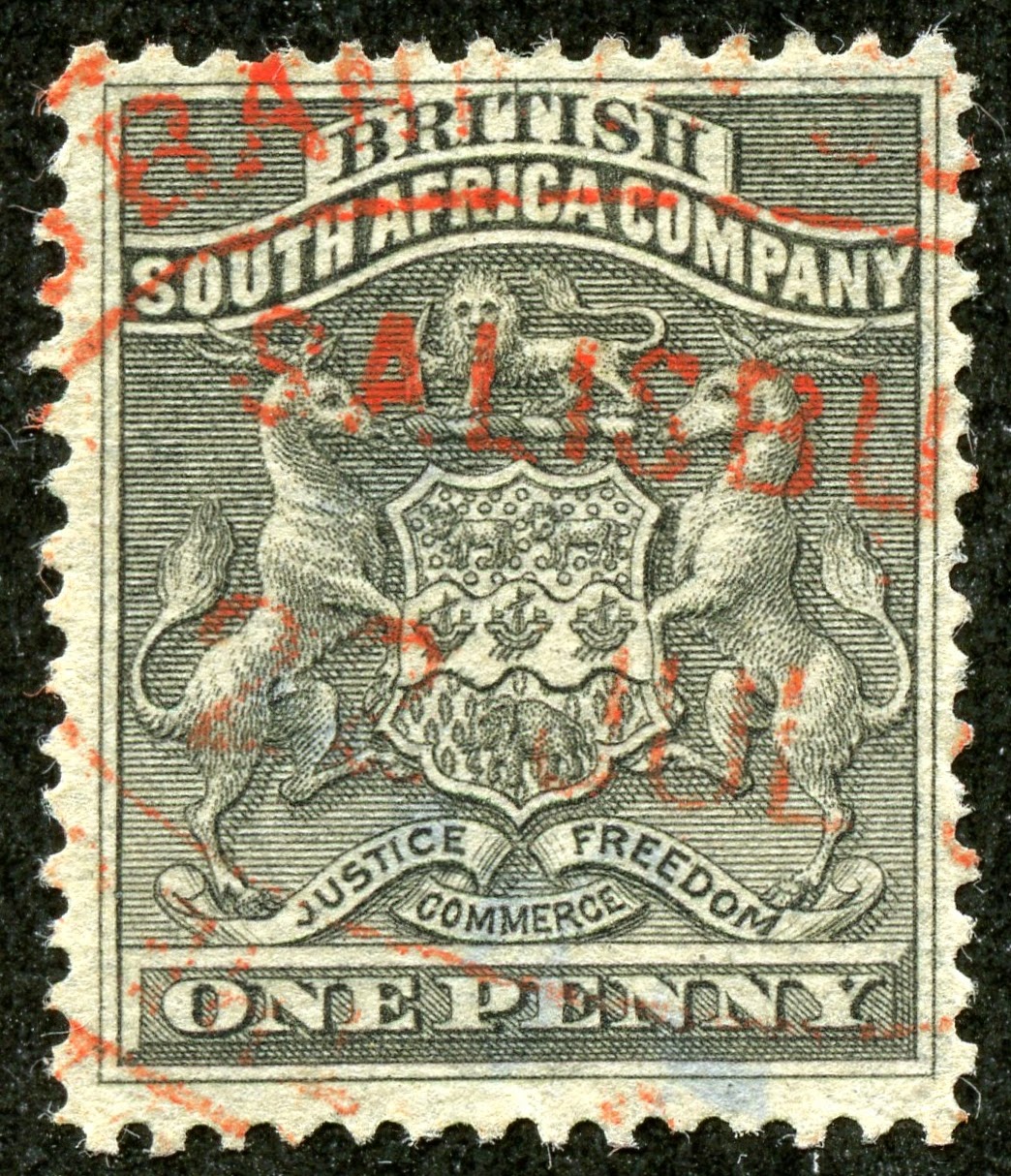 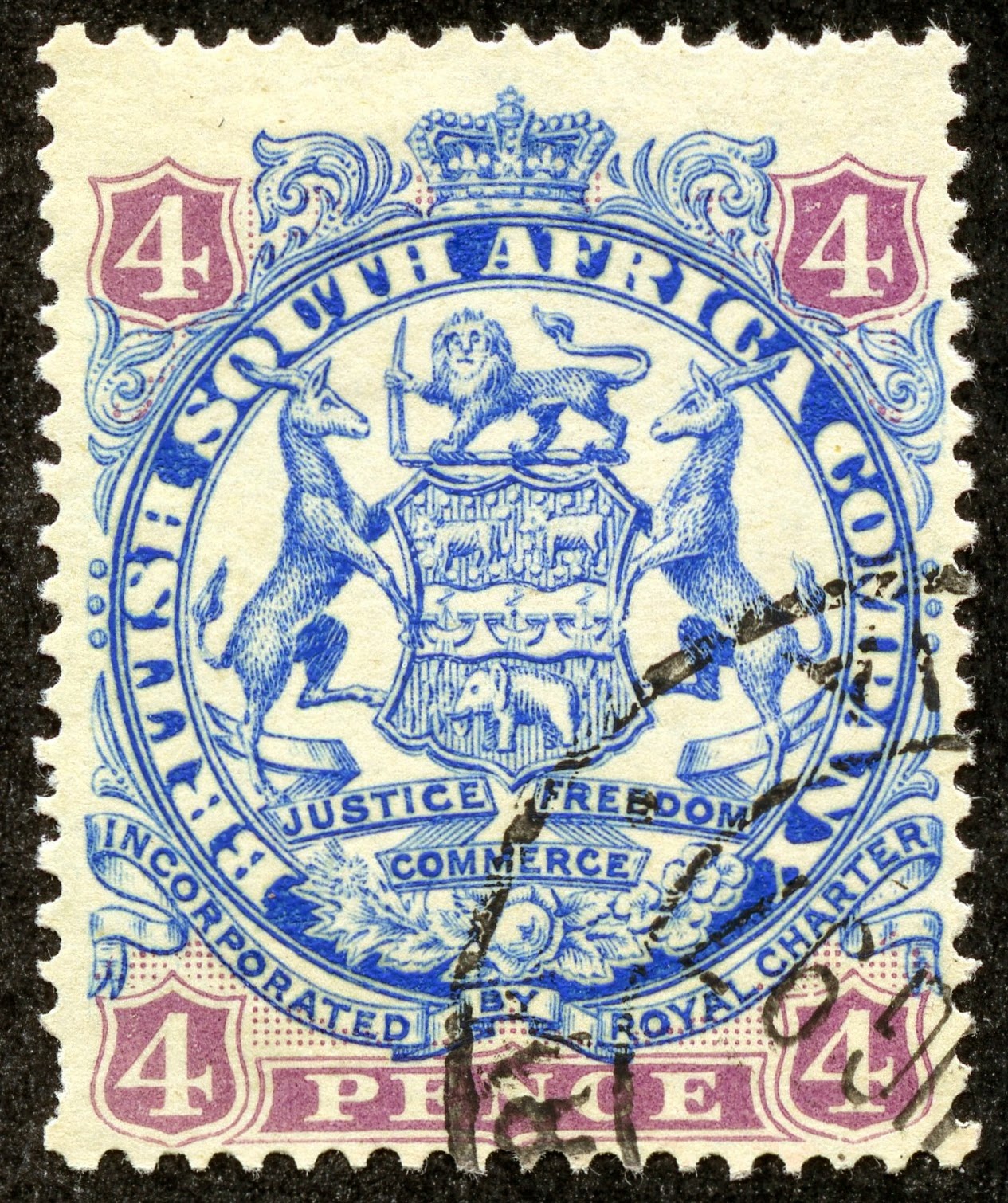 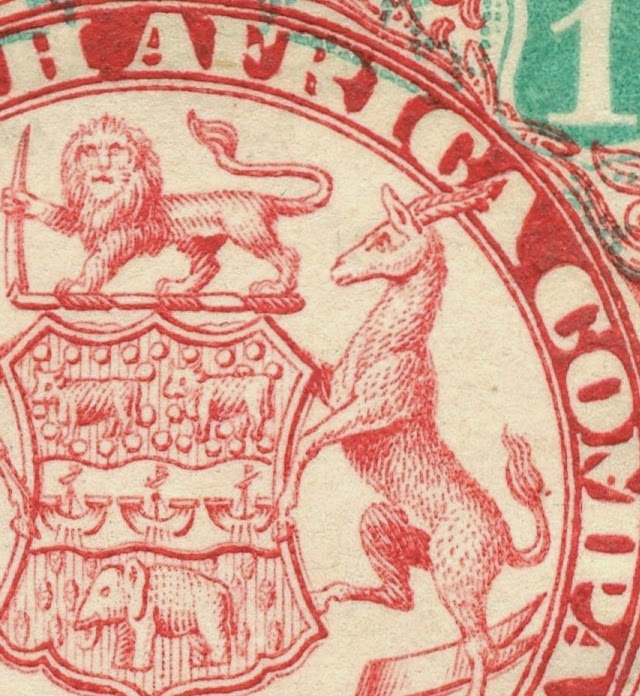 1896 Scott 27a 1p scarlet & emerald
A4 Design: Die I
The 1896 A4 design comes in two flavors: Die I and Die II. Die I has a dot to the right of the springbok supporter tail next to "M" of "COMPANY". And the body of the lion is only partially shaded. 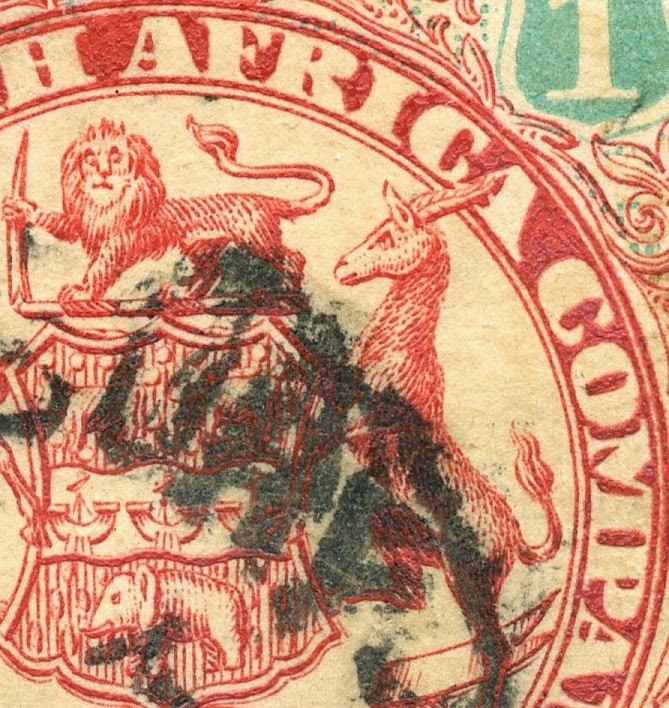 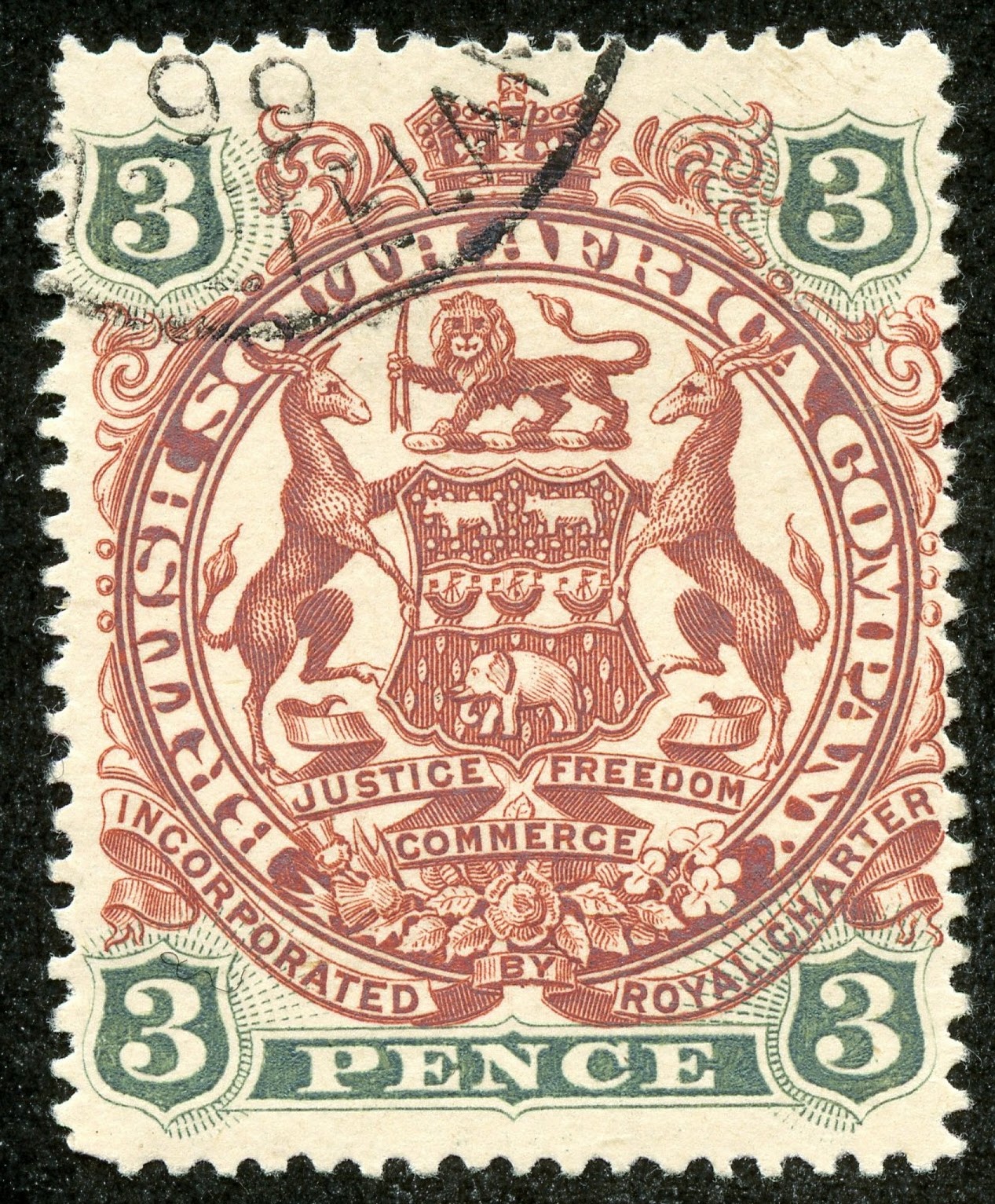 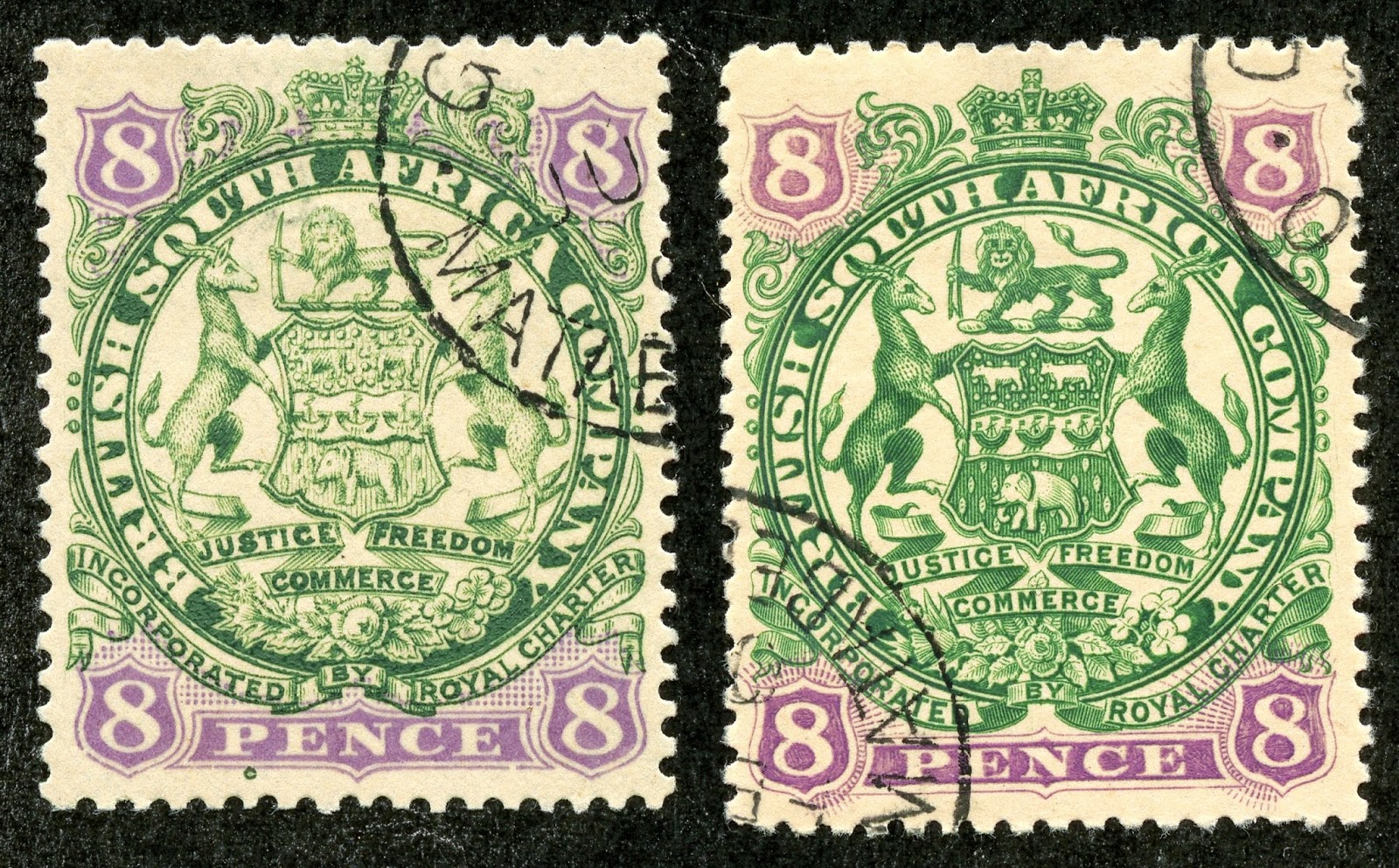 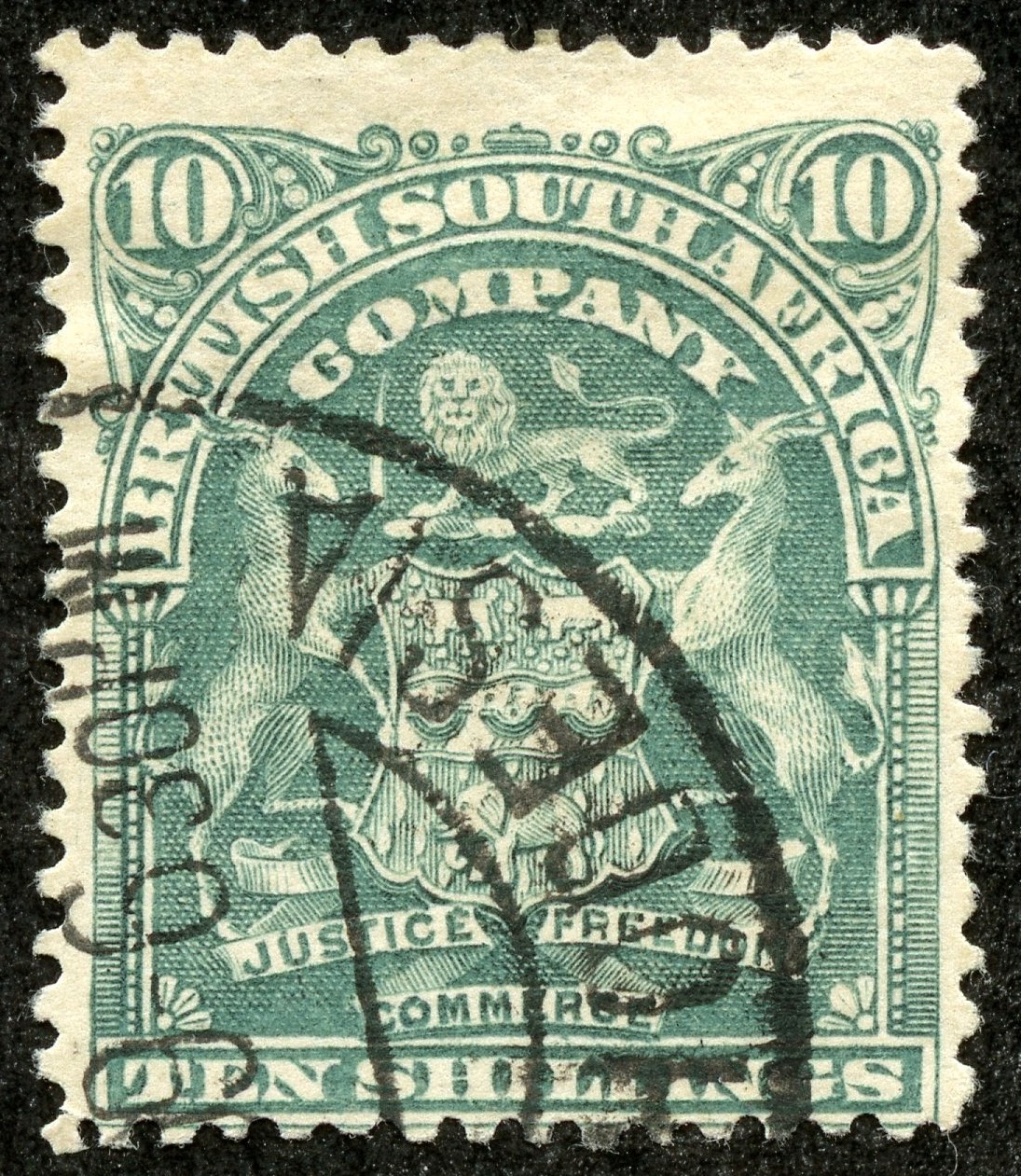 This would prove to be the last issue with no "Rhodesia" overprint or inscription. 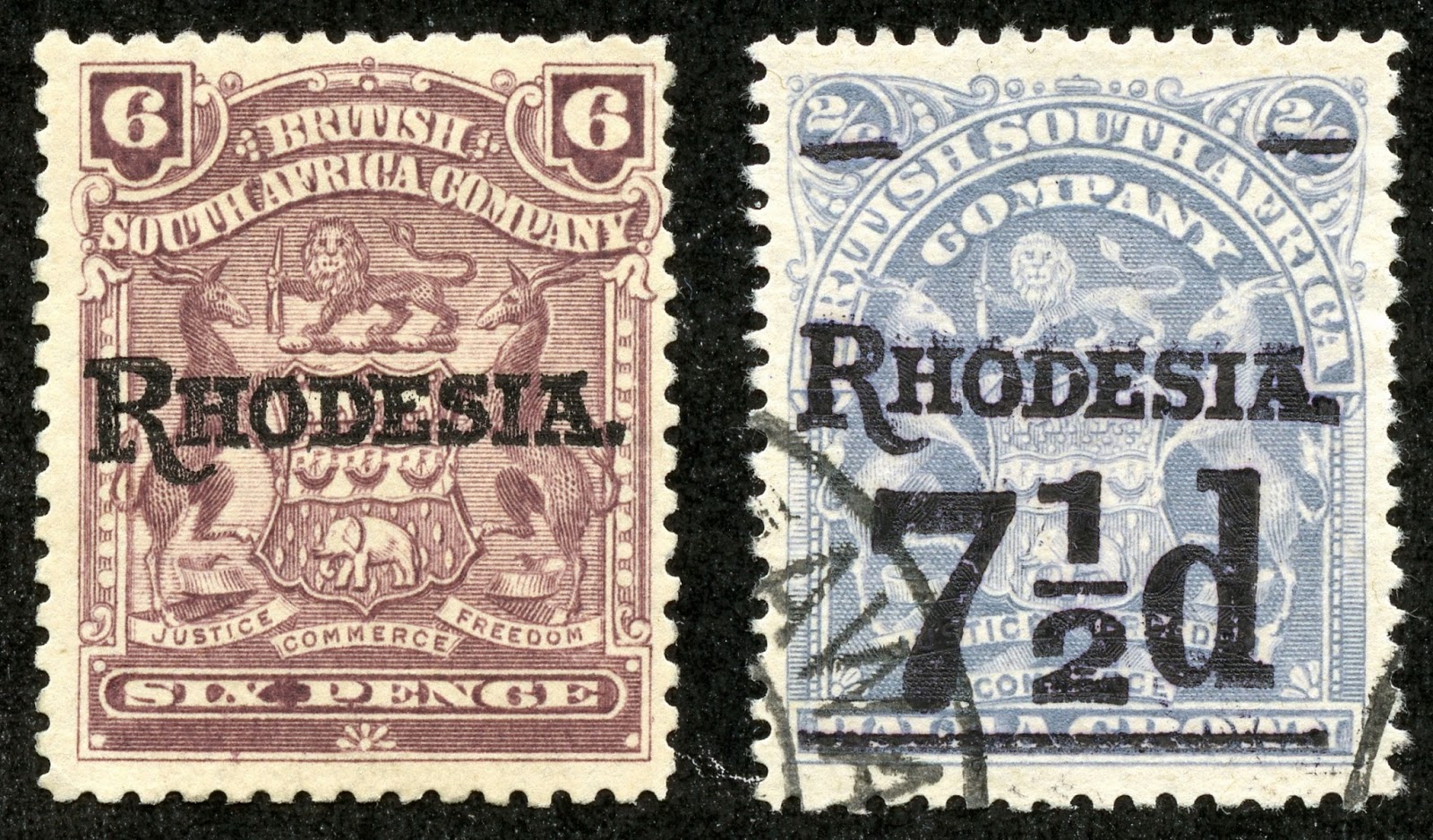 Although the BSAC officially adopted "Rhodesia" as the name of the territories in 1895, and the British government followed suit in 1898, "Rhodesia" did not appear on BSAC stamps until 1909. 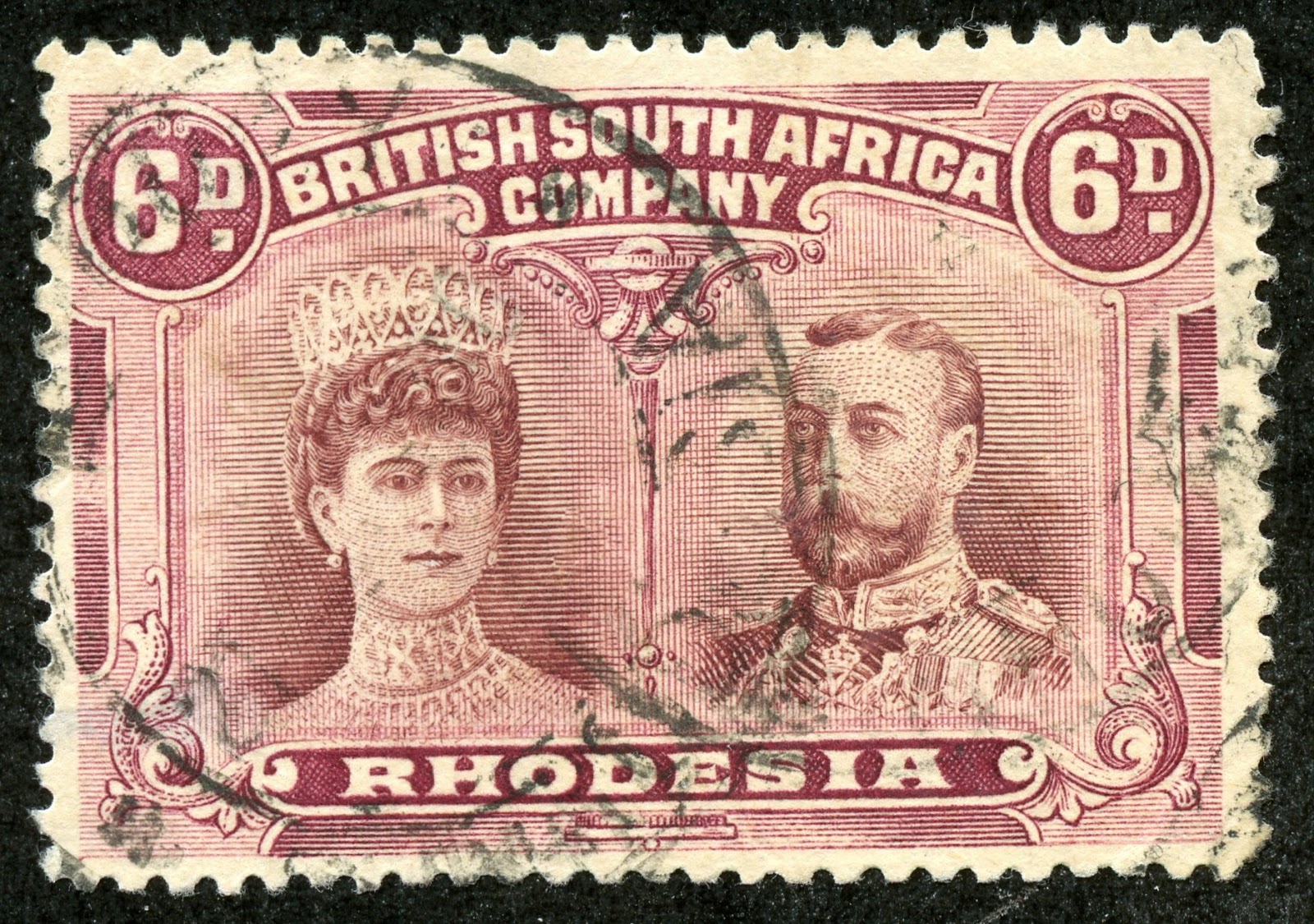 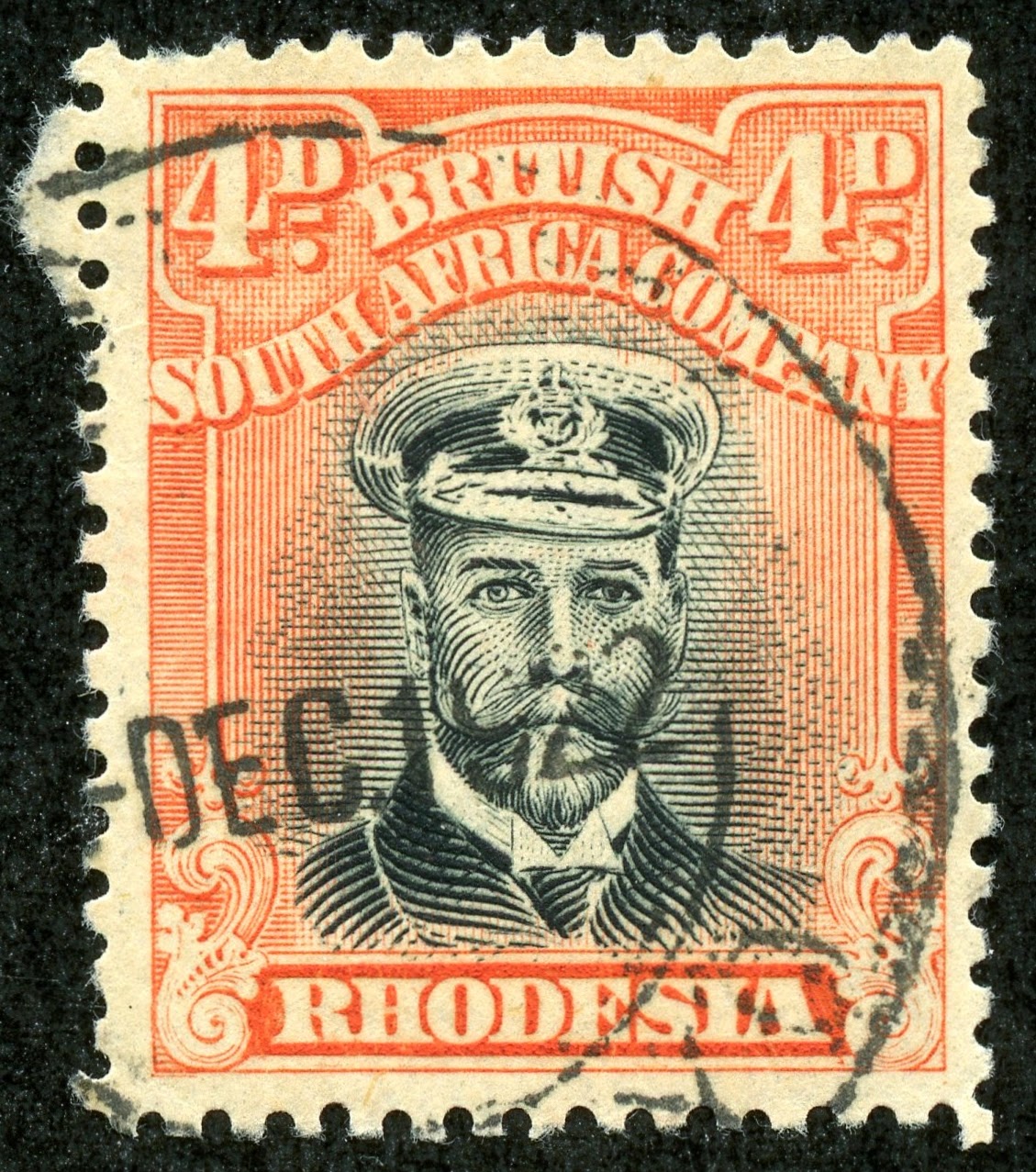 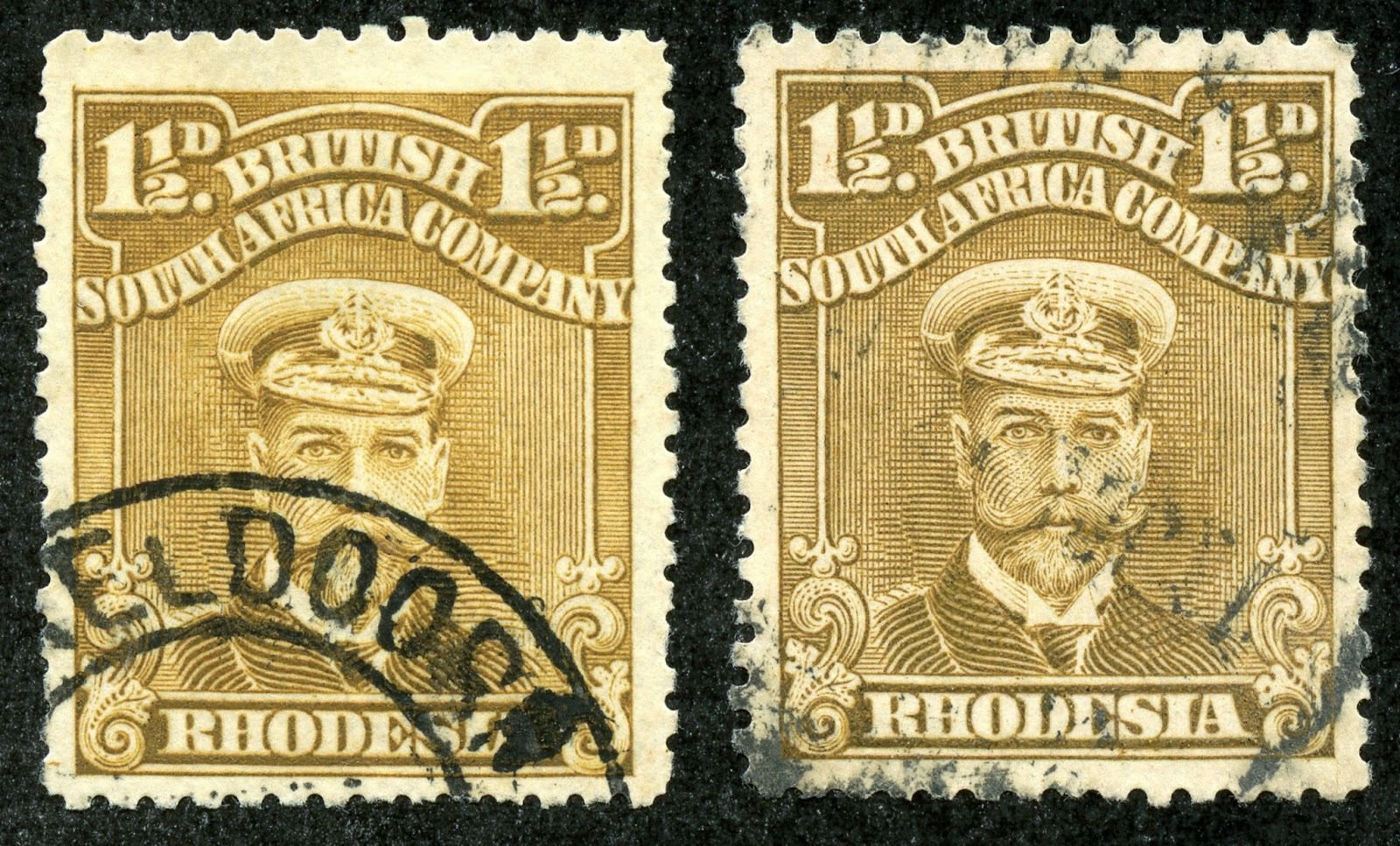 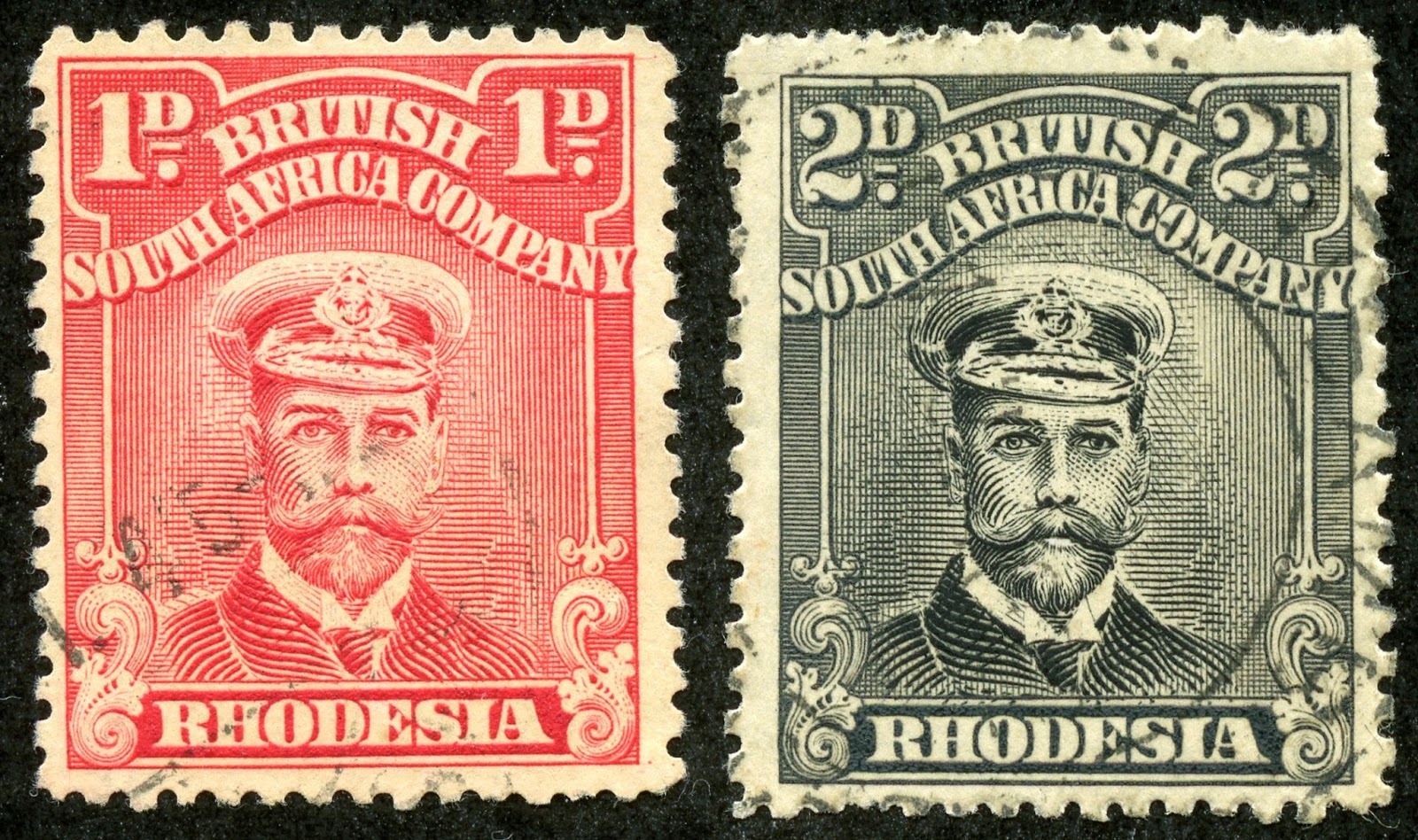 1917 Scott 120 b 1p bright rose & Scott 122a 2p gray & black, Die III
Be aware that the head and cap region can vary in appearance.Note the king's left ear is unshaded in the 1p bright rose, but has shading lines in the 2p gray and black. In fact, the double plate stamps (bi-colored) are found with Die I, Die II, and Die III variations. Scott has a note about this; but better, the Stanley Gibbons 1840-1970 Commonwealth & British Stamps catalogue has drawing illustrations of the differences. 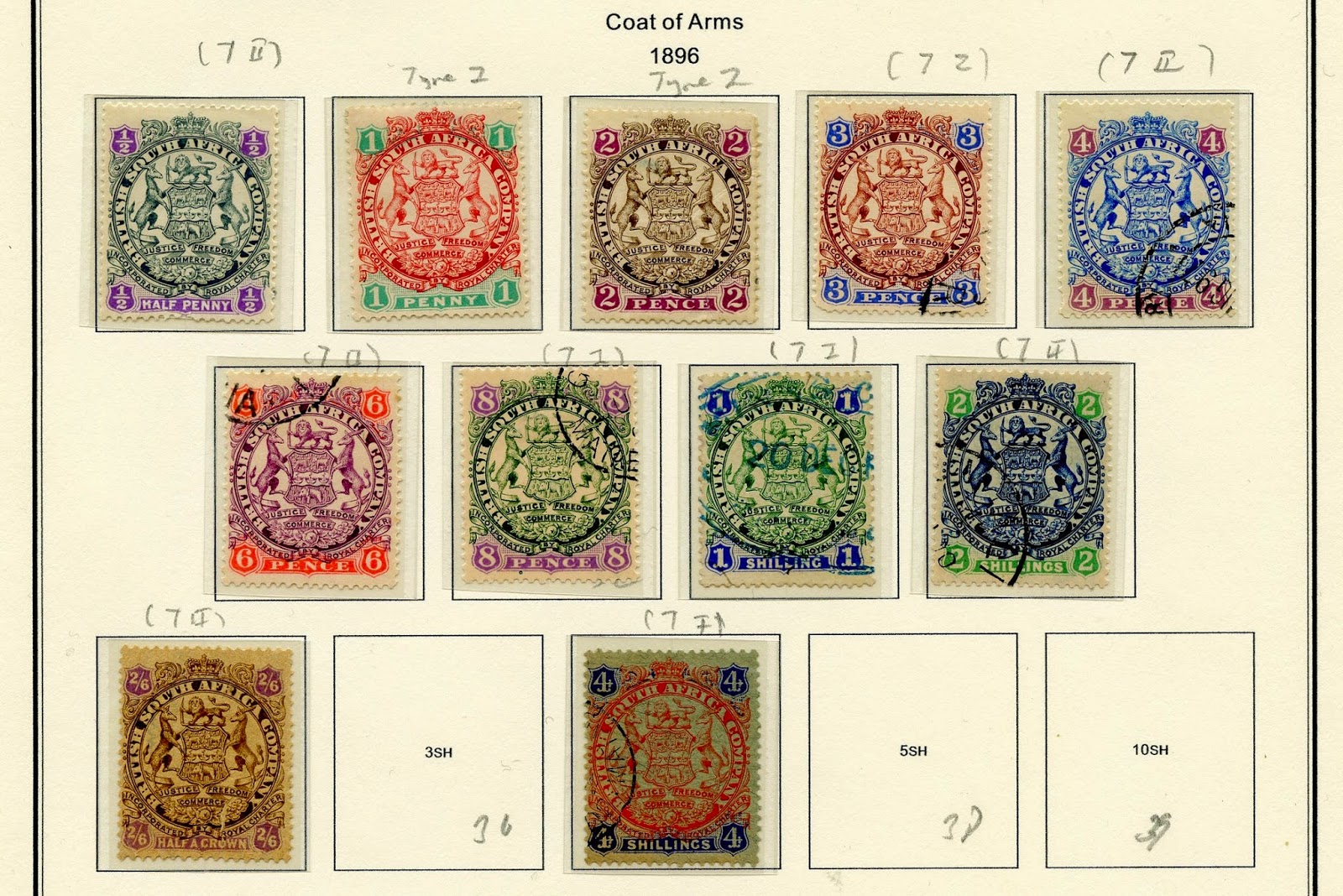 1896 Issue in Deep Blue
Deep Blue (Steiner) has seven pages for classic Rhodesia, and includes a space for all the major Scott numbers. If one wishes to parse out the 1896 "Coat of Arms" issue (shown above) or the 1913-19 "King George V" issue into minor number types, an extra quadrilled page or two may be required. 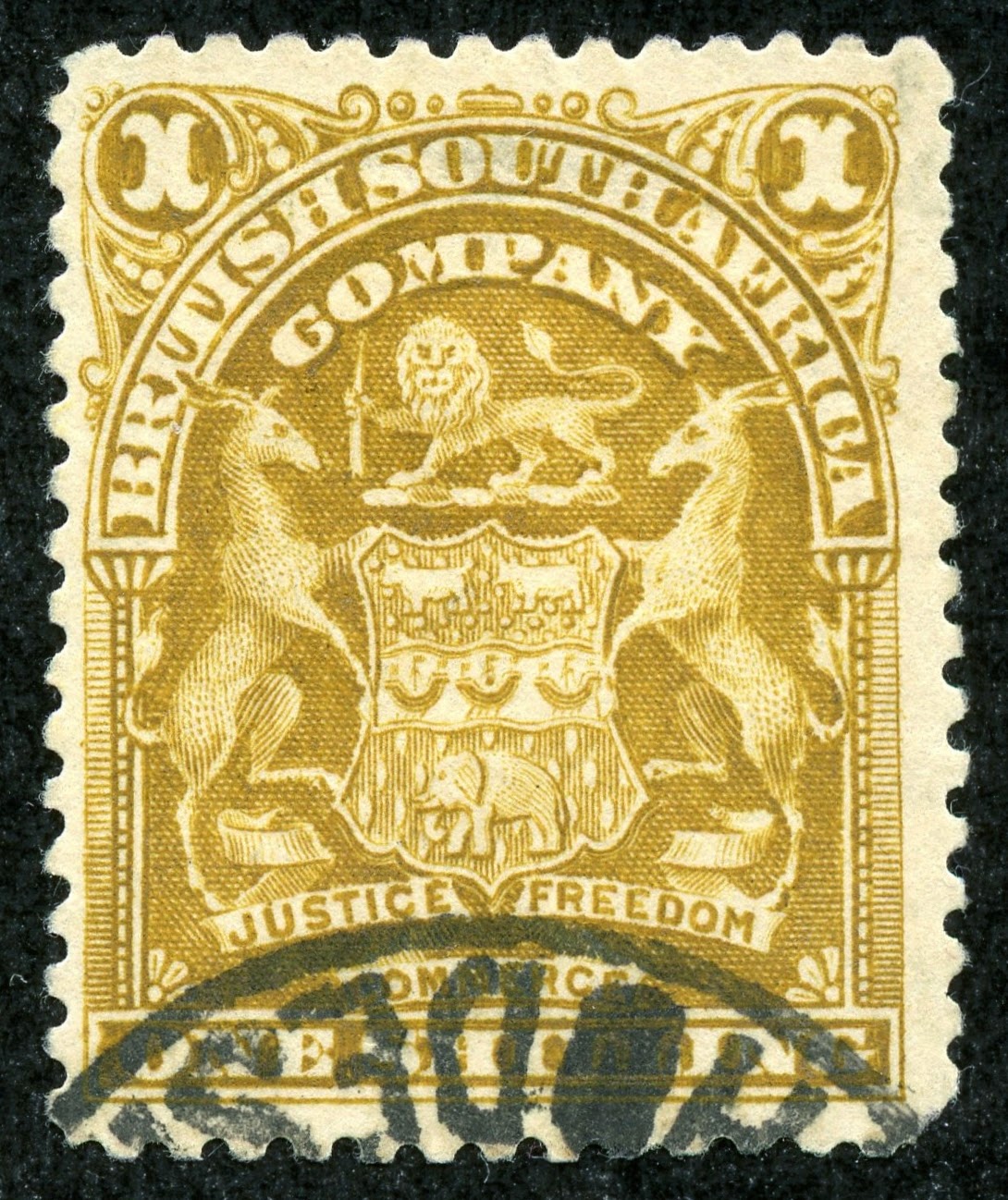 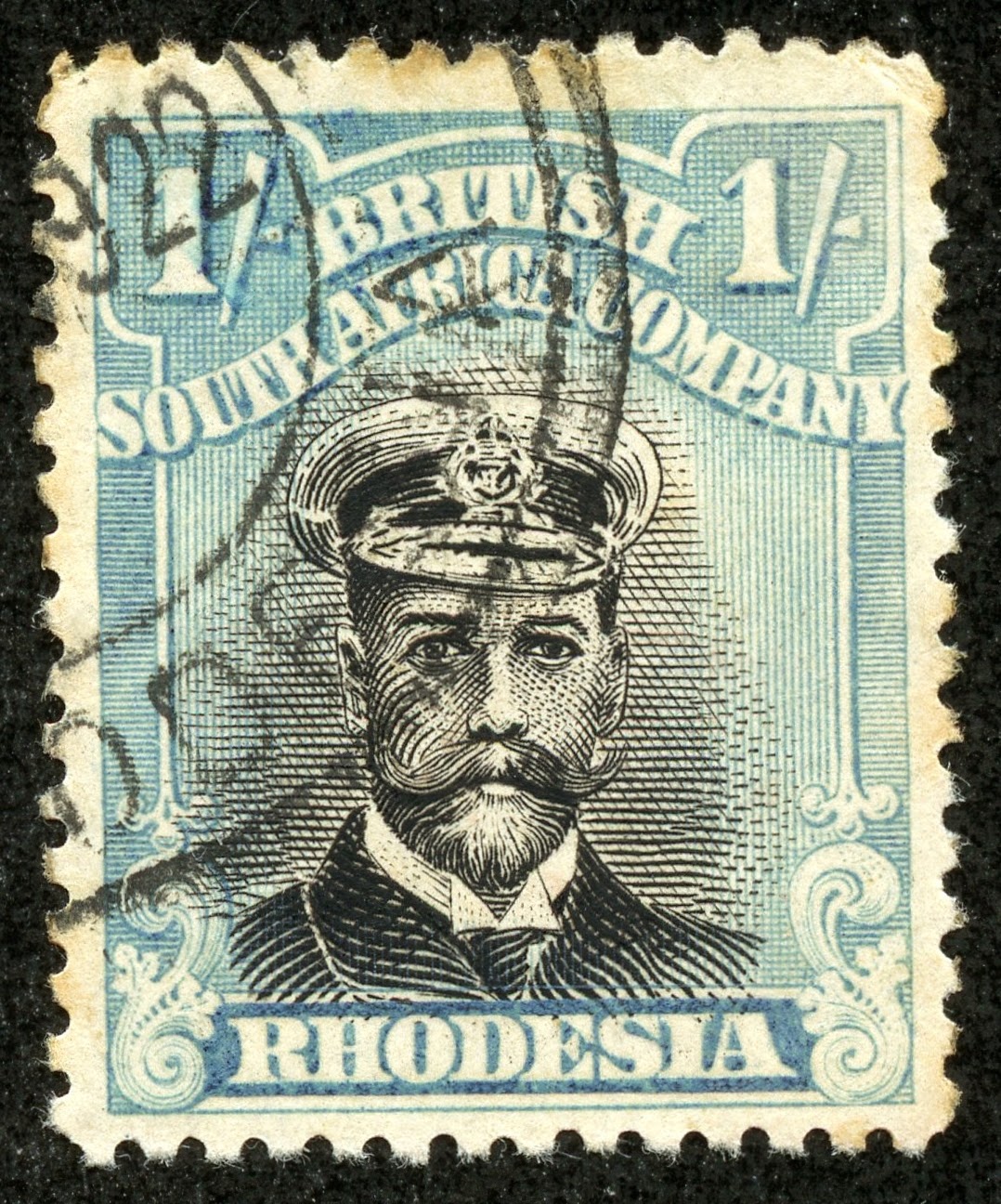 1922 Scott 130 1sh turquoise blue & black
"King George V"
Out of the Blue
My goodness, I like these stamps! Maybe I should drop everything, and specialize in the African British colonial issues?.....

But then, I like Latin America, Europe, and Asia offerings, to name a few geographical stamp issuing areas. And the French colonials are attractive as well.

I guess it is WW classical era collecting for me. ;-)

Note: The 1911 Encylopaedia Britannia Map of Rhodesia, and the Cecil Rhodes drawing appear to be in the public domain.