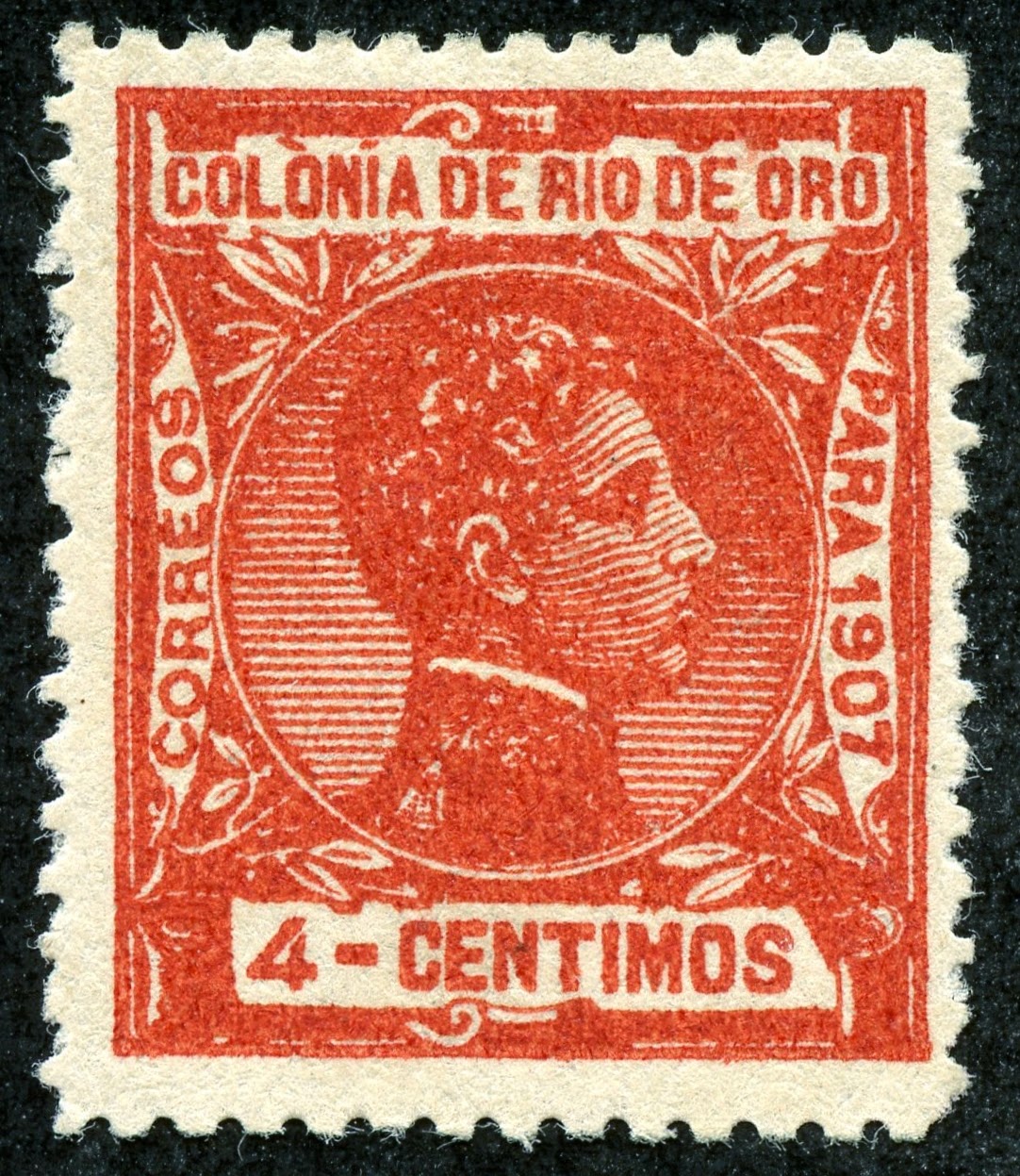 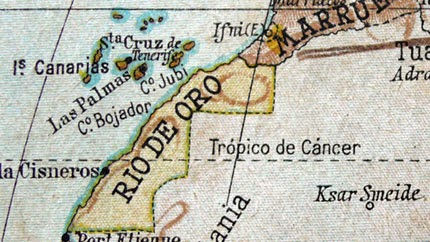 Rio de Oro
The capital was Villa Cisnernos, and the population was reported to be 24,000.

The reality is there is no gold there (despite the name), and the landscape is bleak indeed, with essentially no precipitation, although fog is found along the coast. 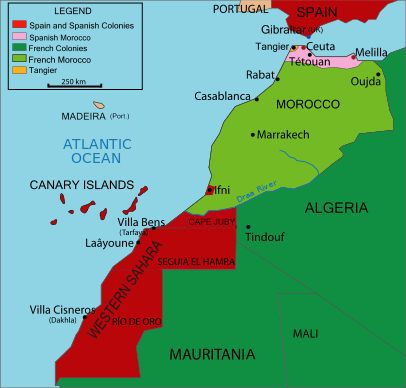 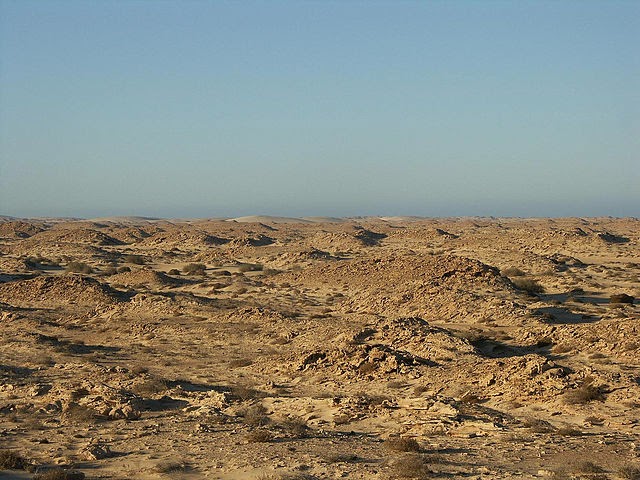 The landscape of Rio de Oro
Rio de Oro became part of Spanish (Western) Sahara, along with Saguia el-Hamra, in 1924.

Spain actually held on to the territory until 1975, when it was then split between  Morocco and Mauritania influence. Eventually, Morocco assumed administrative control of most of the territory.

The dispute continues. The United Nations considers the lands to be a "non self-governing territory", and has urged a referendum on independence for the Sahrawi population. 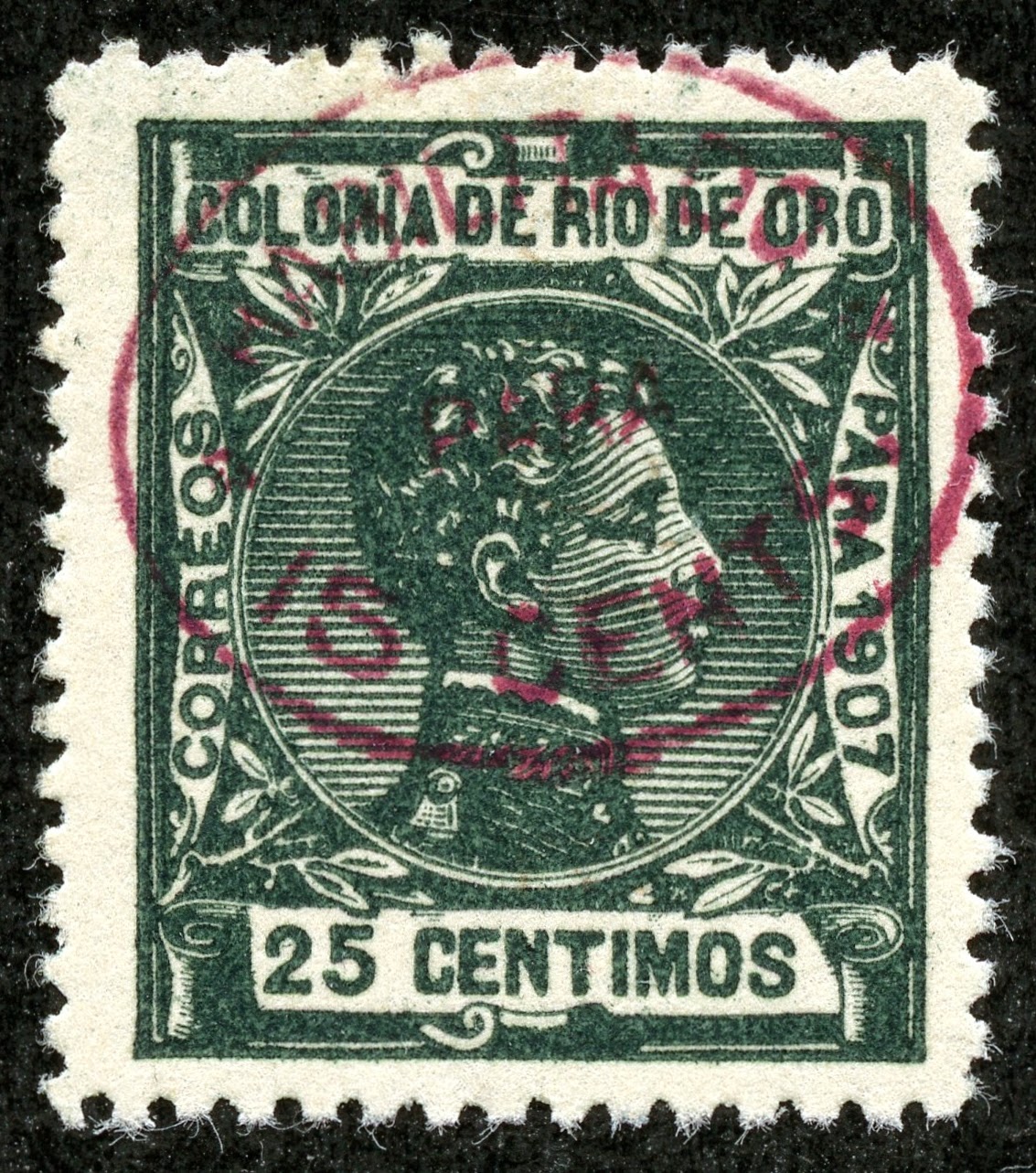 As I have found for a number of other Spanish colonies, WW collections, at least in North America, tend to not have many stamps from Rio de Oro. Unpopularity, unavailability, or "Out of sight, out of mind"? I suspect all are factors. If one wishes more "Rio de Oro" stamps, despite their cheap CV prices, one will need to hunt for them. 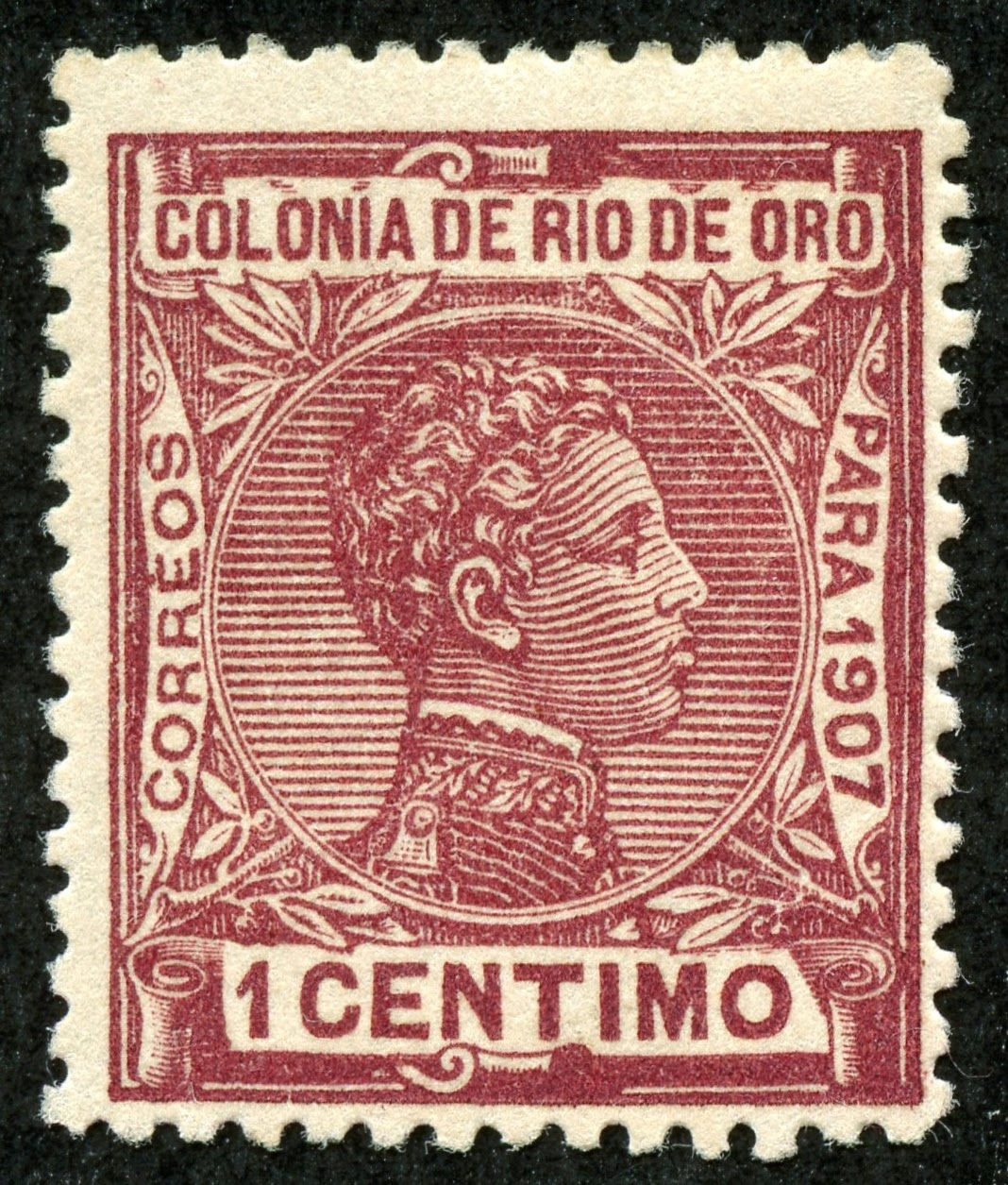 I notice the issues are identical in denomination and general design with the same issued stamps of 1905 and 1907 Spanish colonial  Fernando Po, except for a change in color. 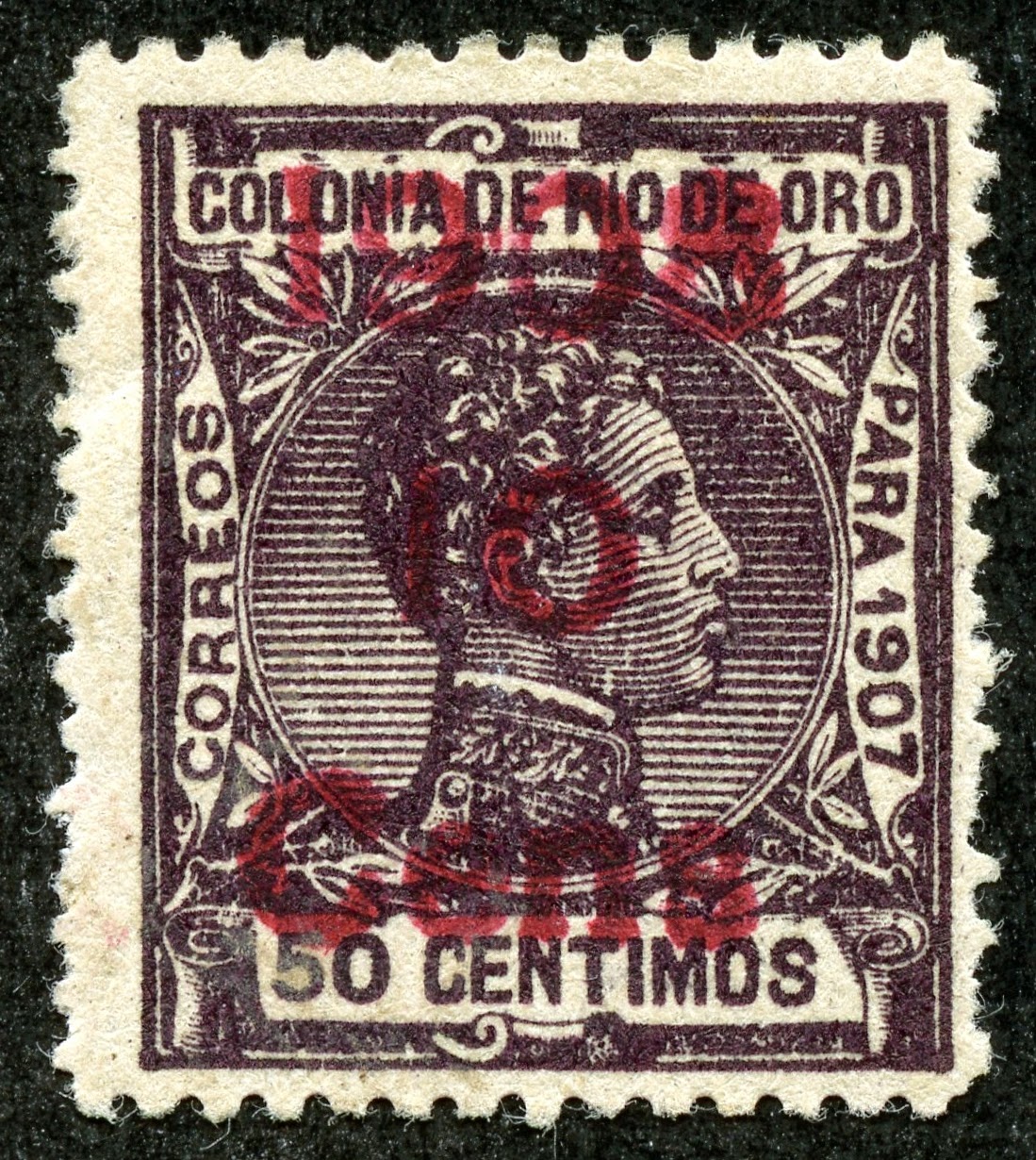 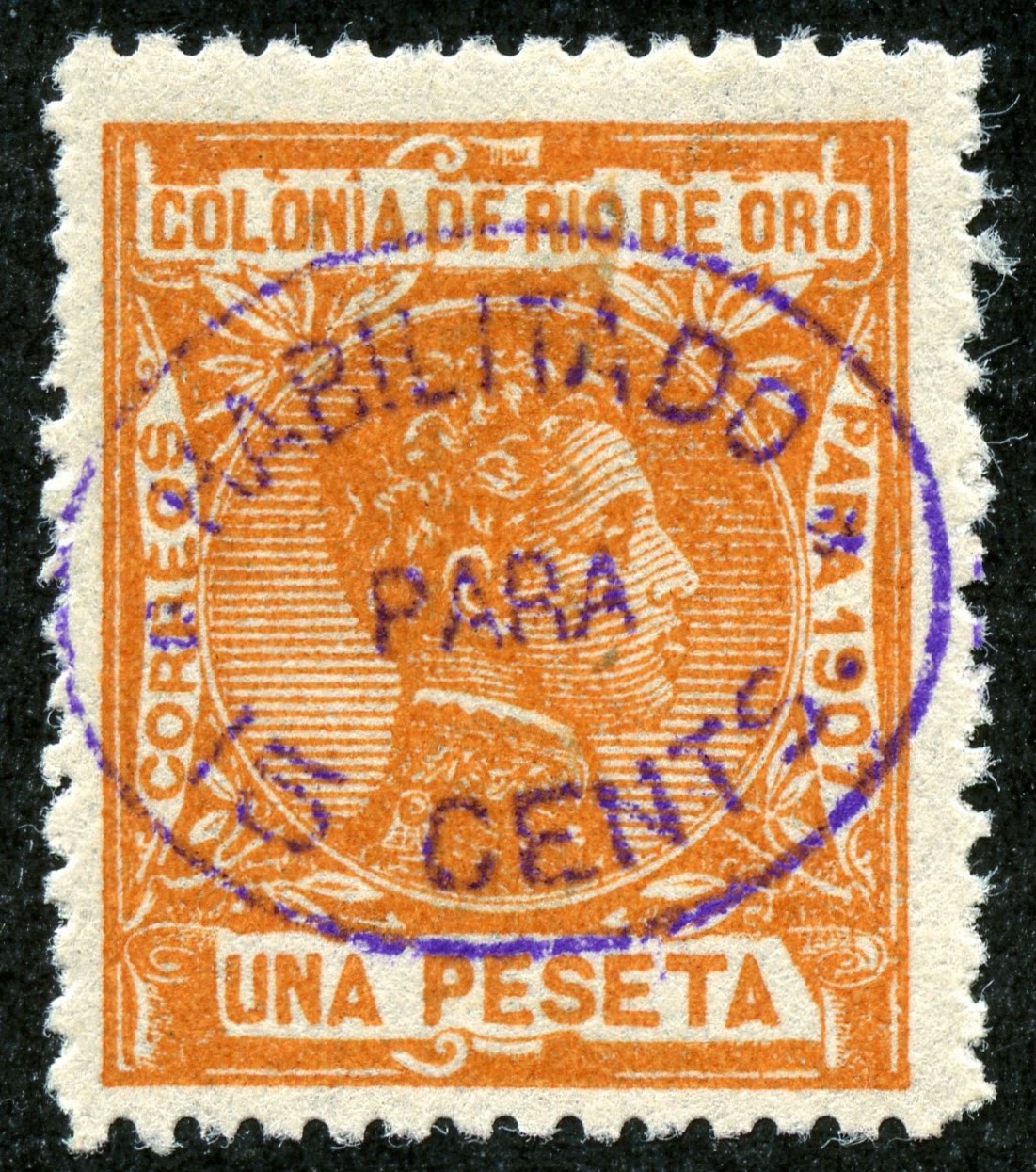 1908 Scott 41 15c on 1p orange
"Surcharged in Violet"
(Color looks blue to me)
Also, five stamps were handstamped surcharged in 1908  as above in red, violet or green.

These handstamped surcharged stamps all have a higher CV ($20+-$40+ unused) than the 1907 original stamps (CV $9-$16 unused). And my examples don't quite have the right handstamp color listed in Scott. Although my examples may be genuine, the specimens would be easy to create with a fake handstamp.

And that brings up a general caution about overprinted/surcharged stamps, most especially handstamped ones...

It is quite difficult as a WW generalist to develop the expertise to tell genuine from fake overprinted stamps. (Sure, one may be able to do it for a certain country, but then there is the next country, and the next country....get the point? ;-)

For myself, I don't mind picking up a "representative" collection of overprinted stamps provided I didn't pay much for them. Yes, some could be fake, but many (most) are not worth getting certified because of the modest CV.

And some WW collectors have chosen to avoid overprinted/surcharged stamps entirely if the overprinted variety have a higher CV than the originals- there are plenty of non overprinted  to collect. 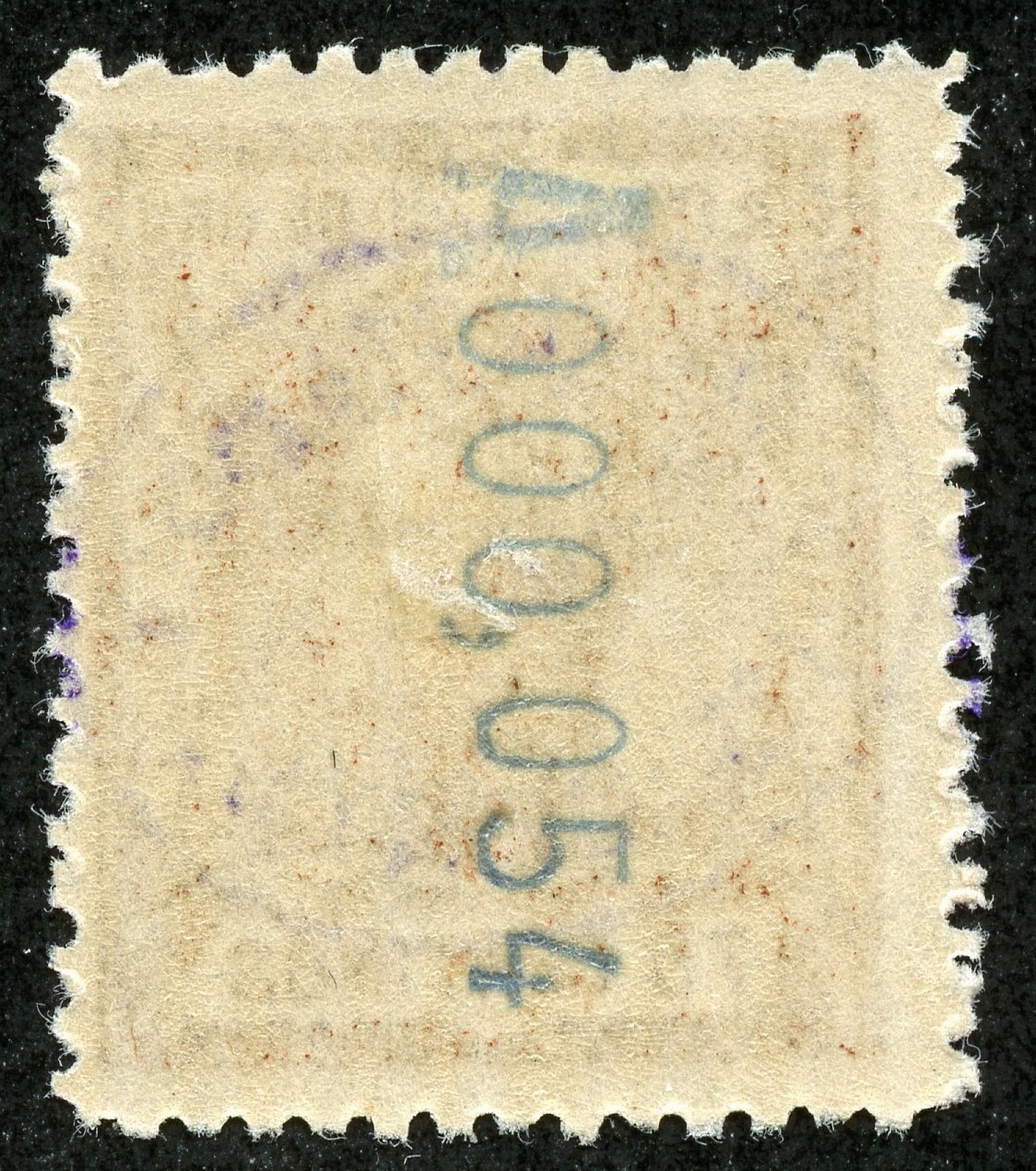 Back of 1908 Scott 40 15c on 75c orange brown
Control Numbers in Blue
This might be a good time to remind ourselves that Spanish colonial stamps frequently have control numbers printed on the back.  All of the Rio de Oro stamps are in this category. 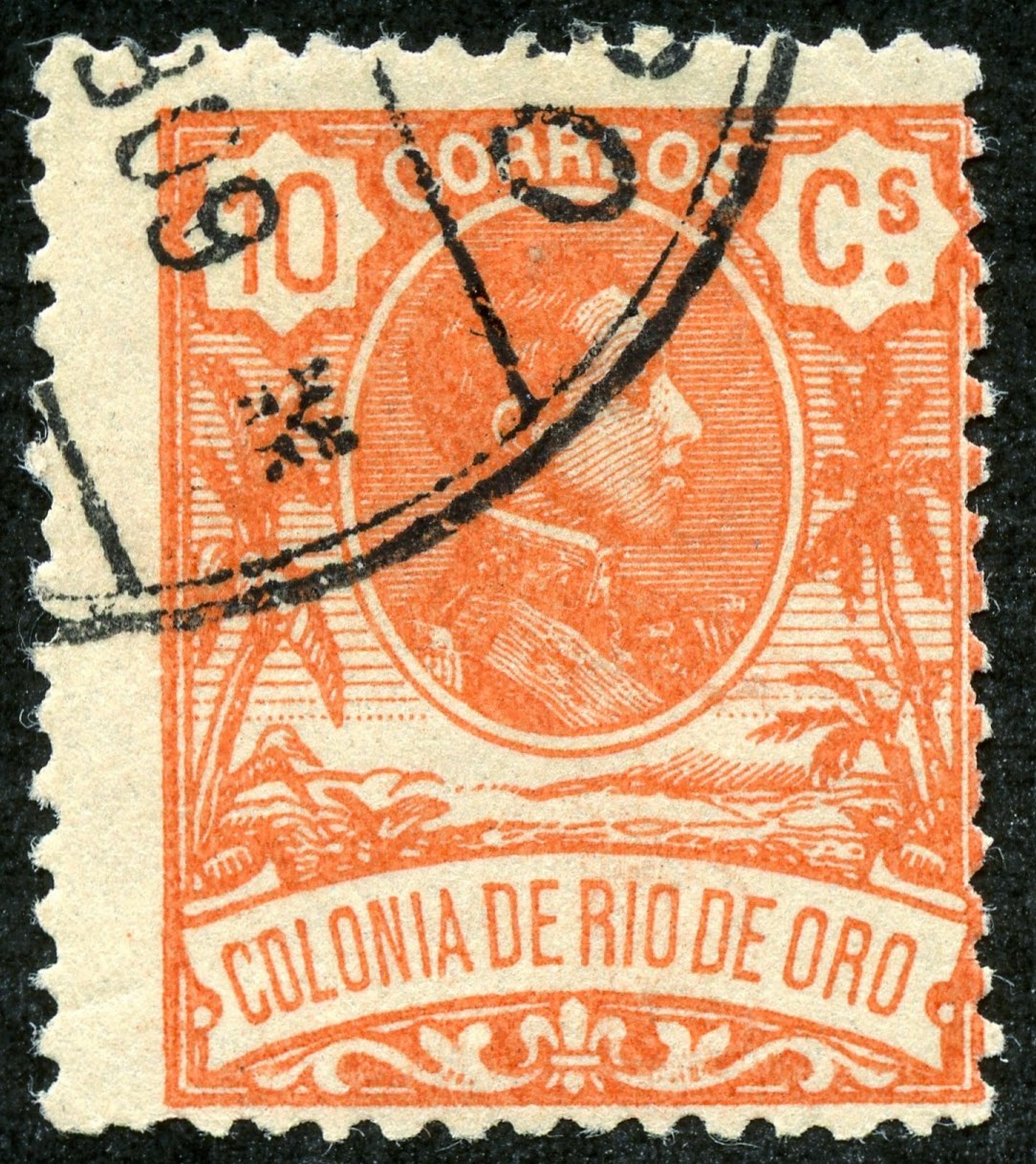 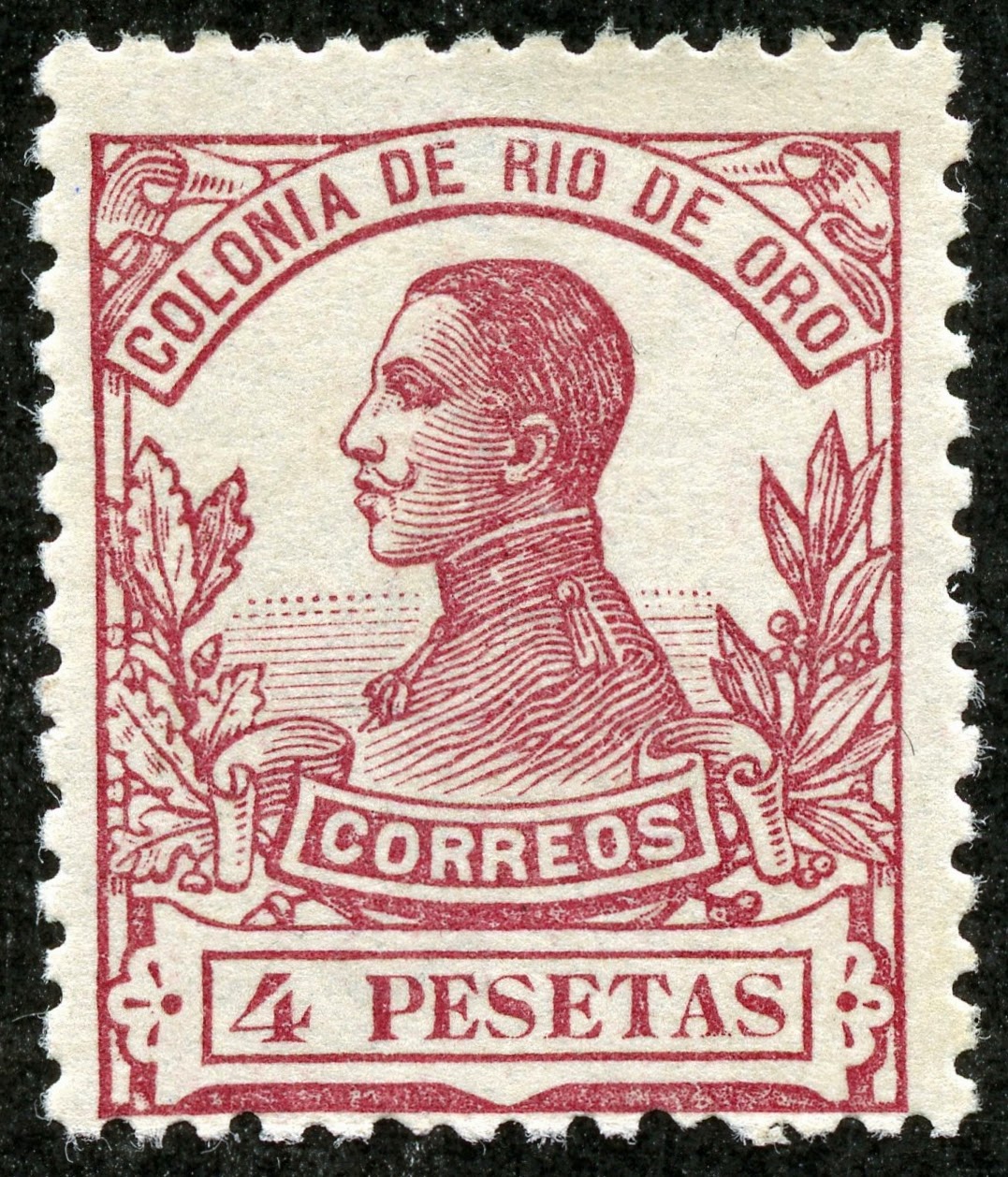 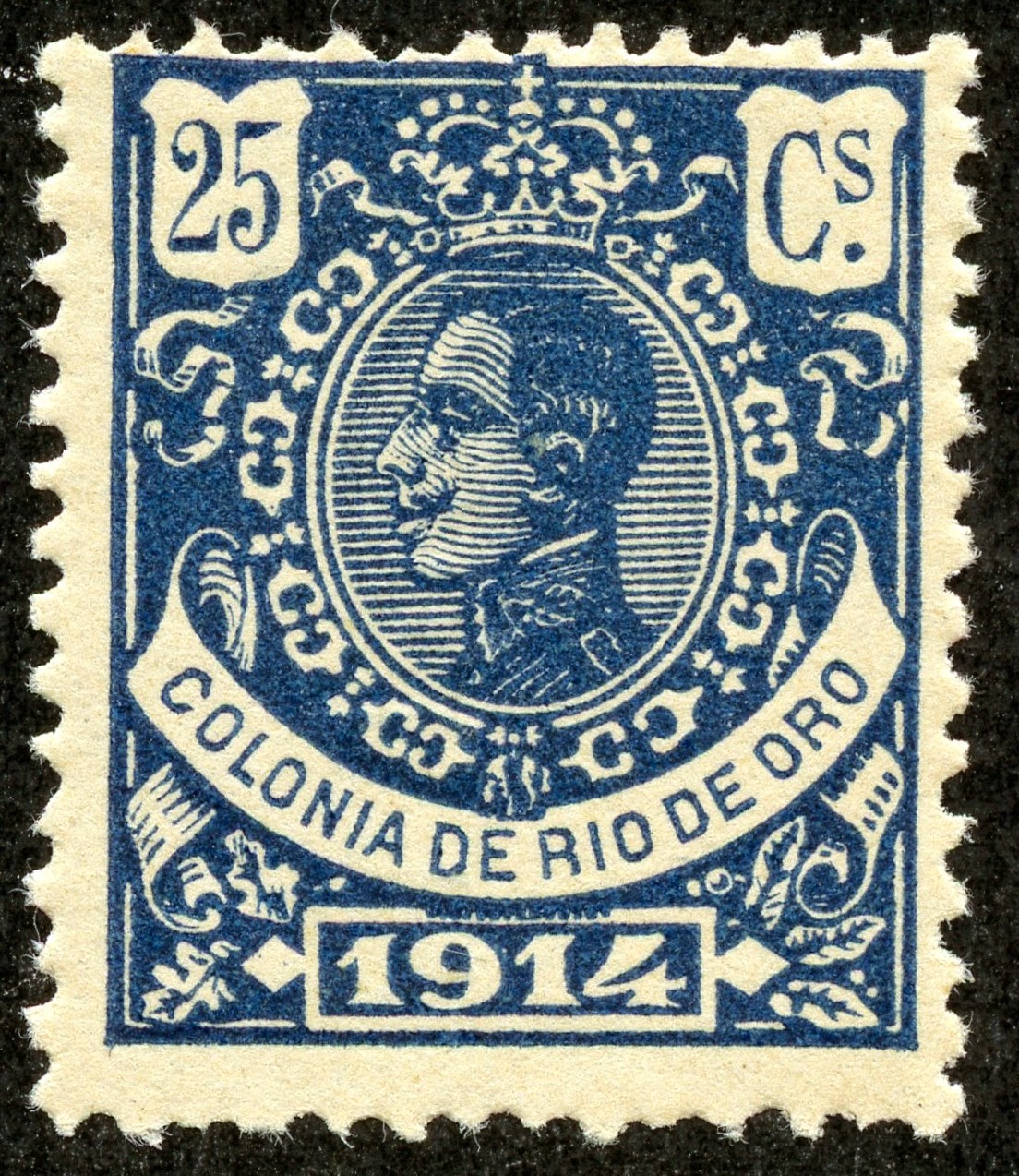 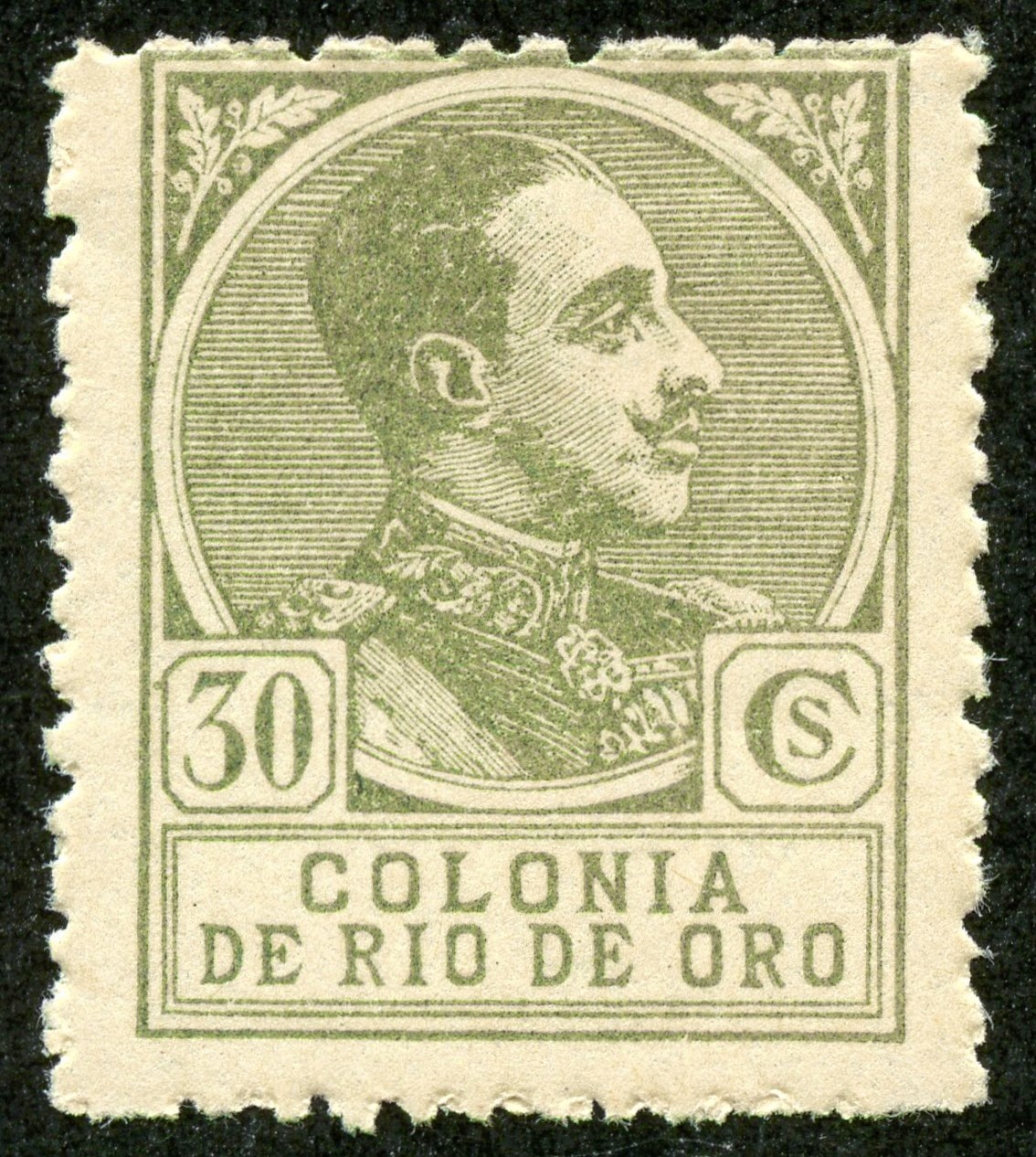 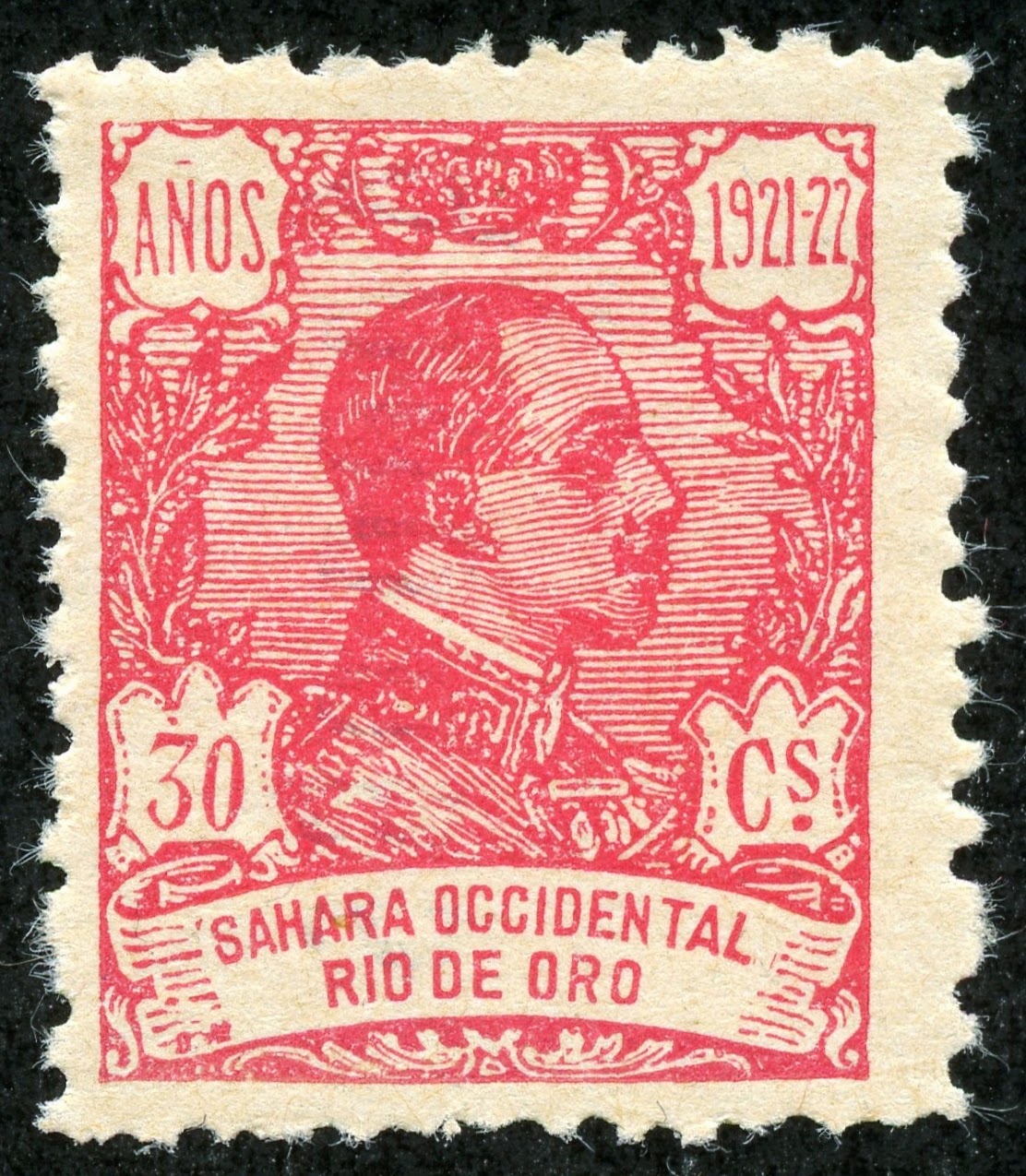 In 1924, the colony was absorbed into Spanish Western Sahara, and Rio de Oro's stamp production ceased. 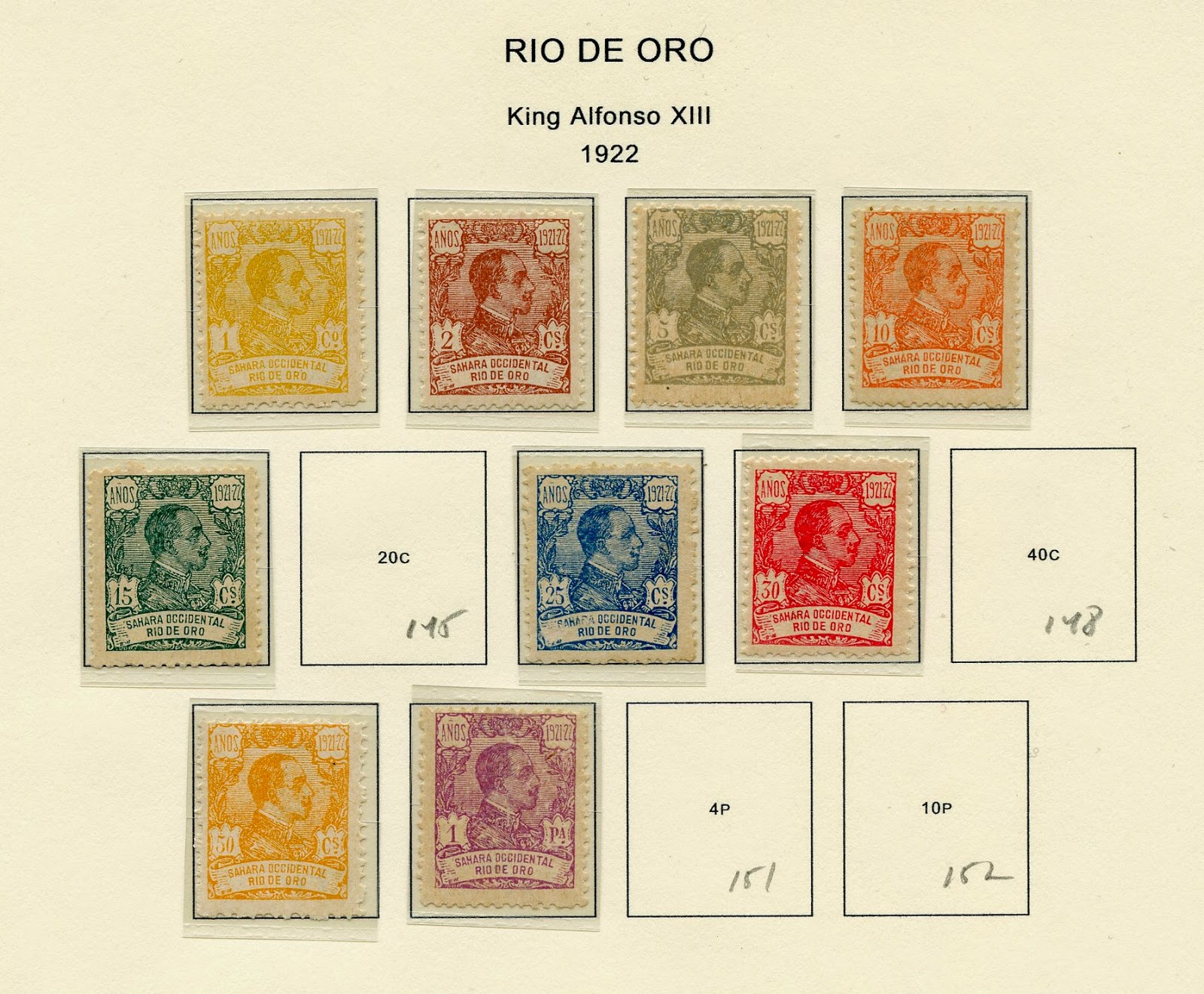 1922 Issue in Deep Blue
Deep Blue (Steiner) has seven pages for Rio de Oro, and has a space for all the major Scott numbers. 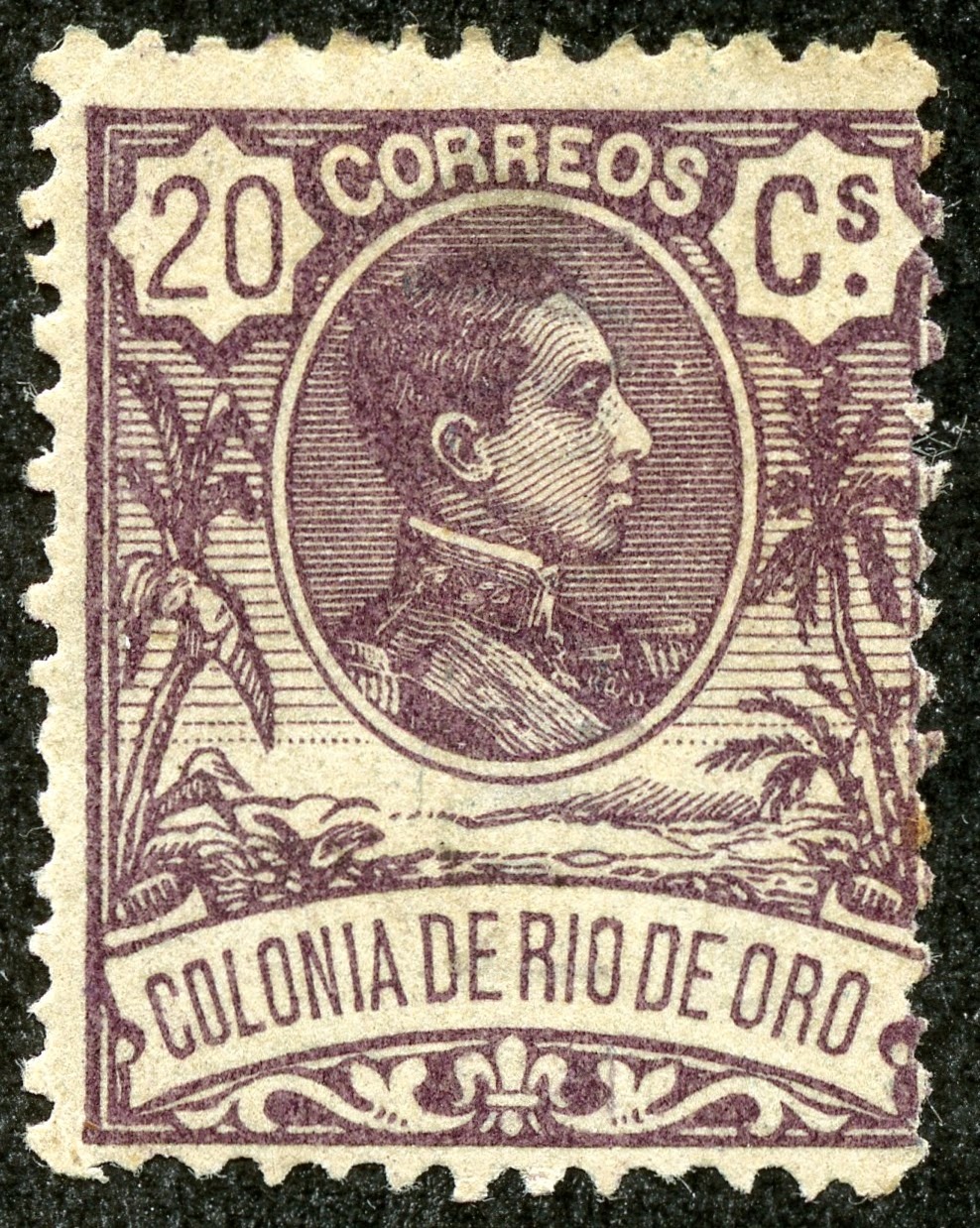 All of the spaces in the BB album for Rio de Oro can be filled with CV <$1 stamps. But BB leaves out another 31 stamps which also have a CV of <$1. This might reflect the unpopularity- or perhaps unavailability- of the obscure Spanish colonies for Scott's (primarily) North American collectors.

The coverage in the 40s editions are the same.

But perhaps we should be grateful for any coverage at all. ;-)

Because the Index, or Table of Contents for Countries in the '69 BB ( and also my '92 BB edition) does NOT include a listing for Rio de Oro, although, as said, one will find the coverage on the same page as Quelimane. 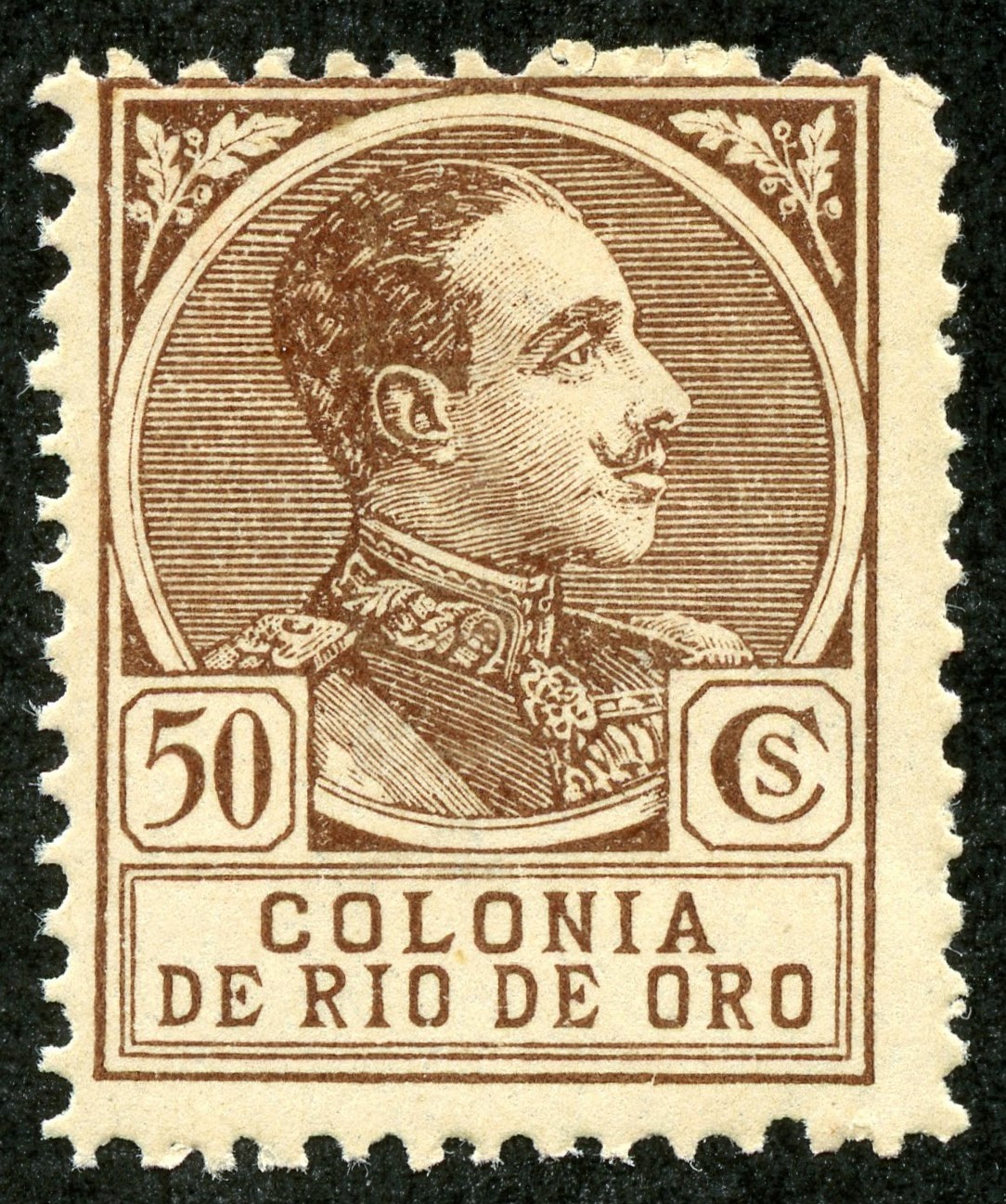 Prices are cheap- which implies "common", yet not many examples are found in collections.