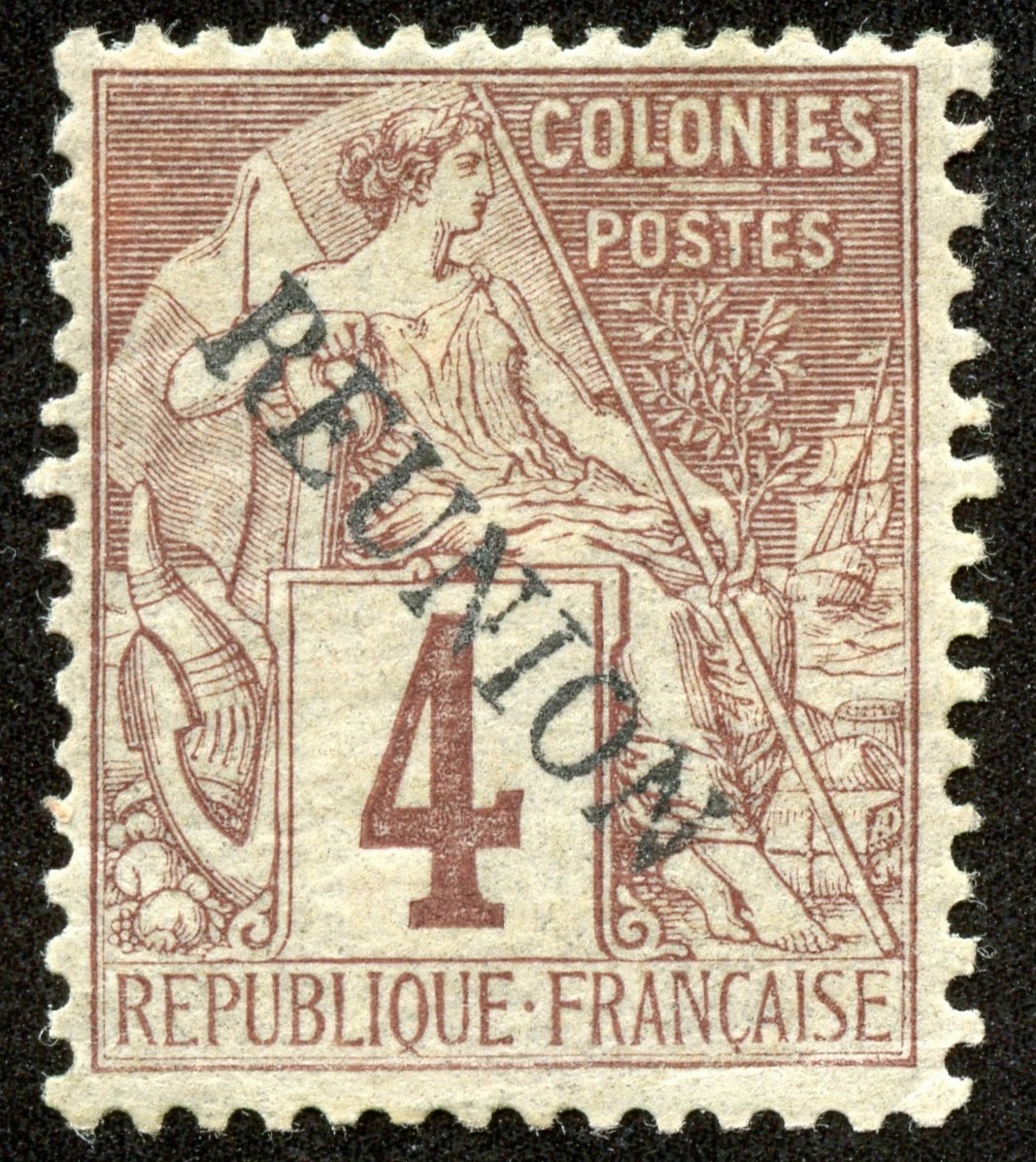 1891 Scott 19 4c claret/lavender
Stamps of French Colonies Overprinted
Quick History
Reunion (more properly Réunion) is presently an overseas department of France, but has been in the French realm since 1642. The island, located 120 miles east of Madagascar in the Indian Ocean, was an important stopover on the East Indies trade route, but less so after the opening of the Suez Canal in 1869. 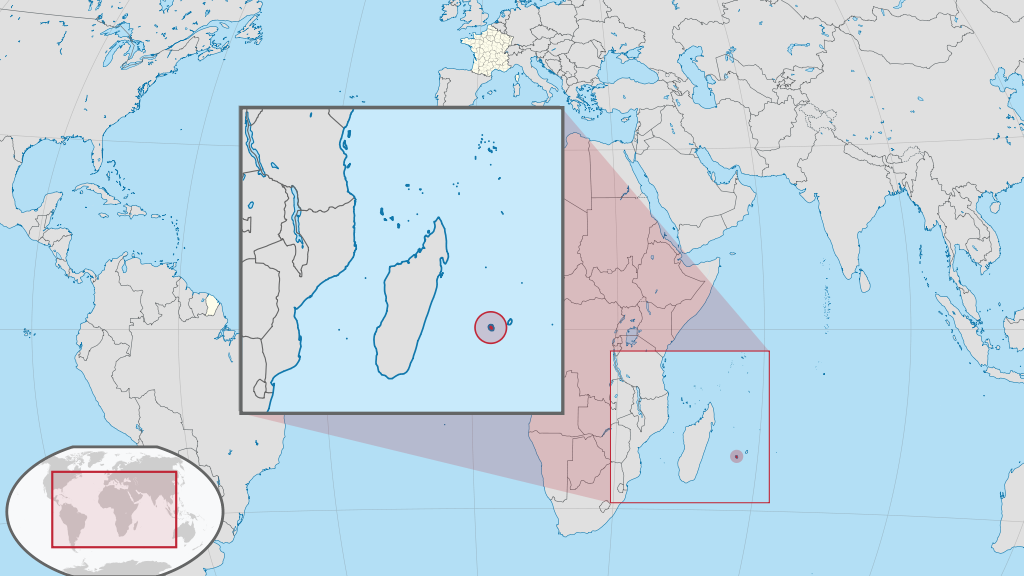 Interestingly, there were no indigenous people on the island during historical times, so the population was a melting pot of immigrant African, European, Malagasy, Indian, and Chinese groups. 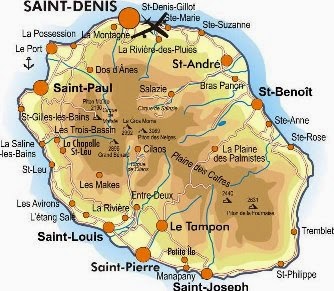 Map of Reunion
In 1852, the first Reunion stamp issue was typographed, and had a 15c black/blue and a 30c black/blue denomination. They are in the $20,000+ CV range, although the reprints are considerably less.

The familiar "Navigation and Commerce" colony stamps were issued between 1892-1905. 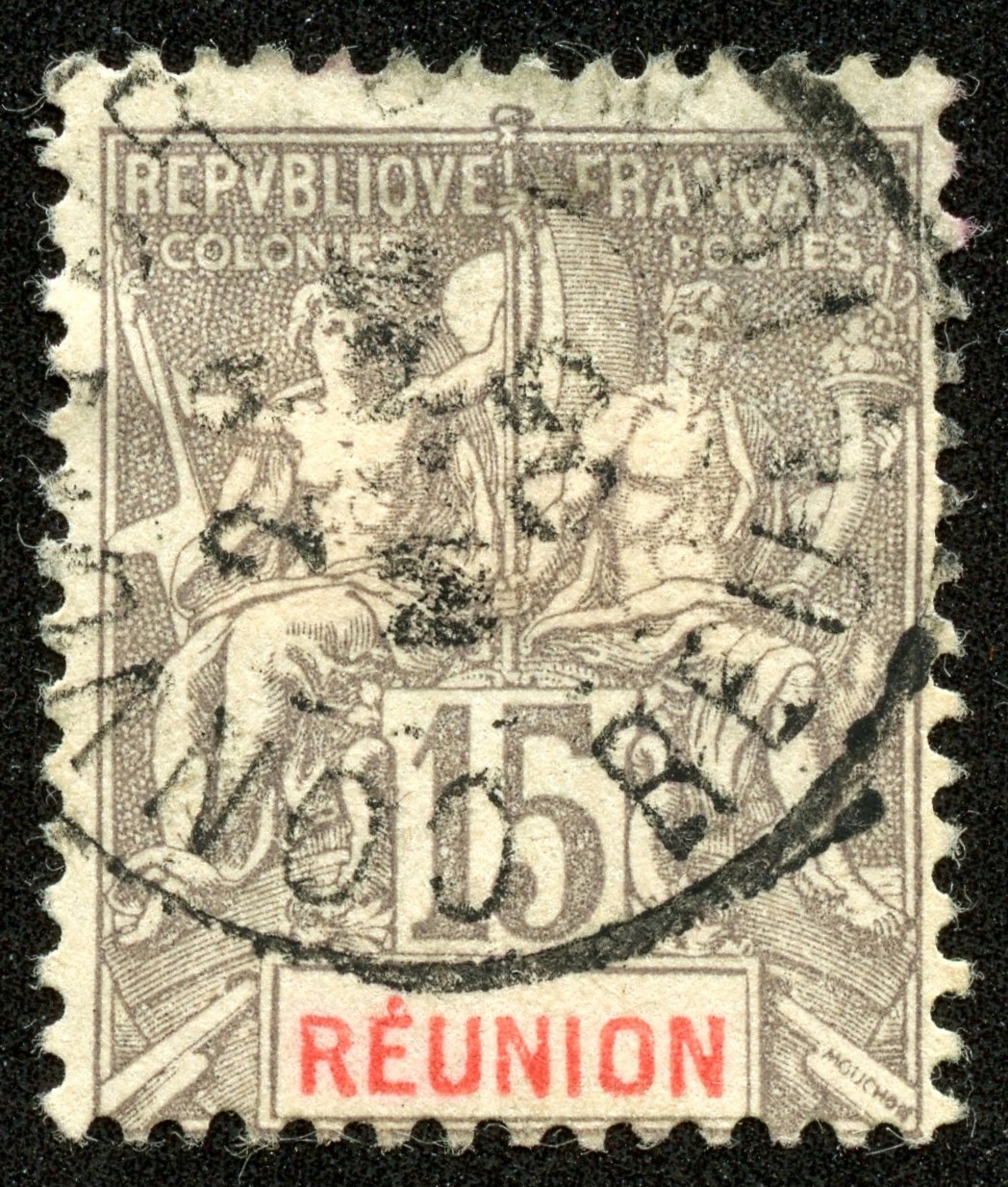 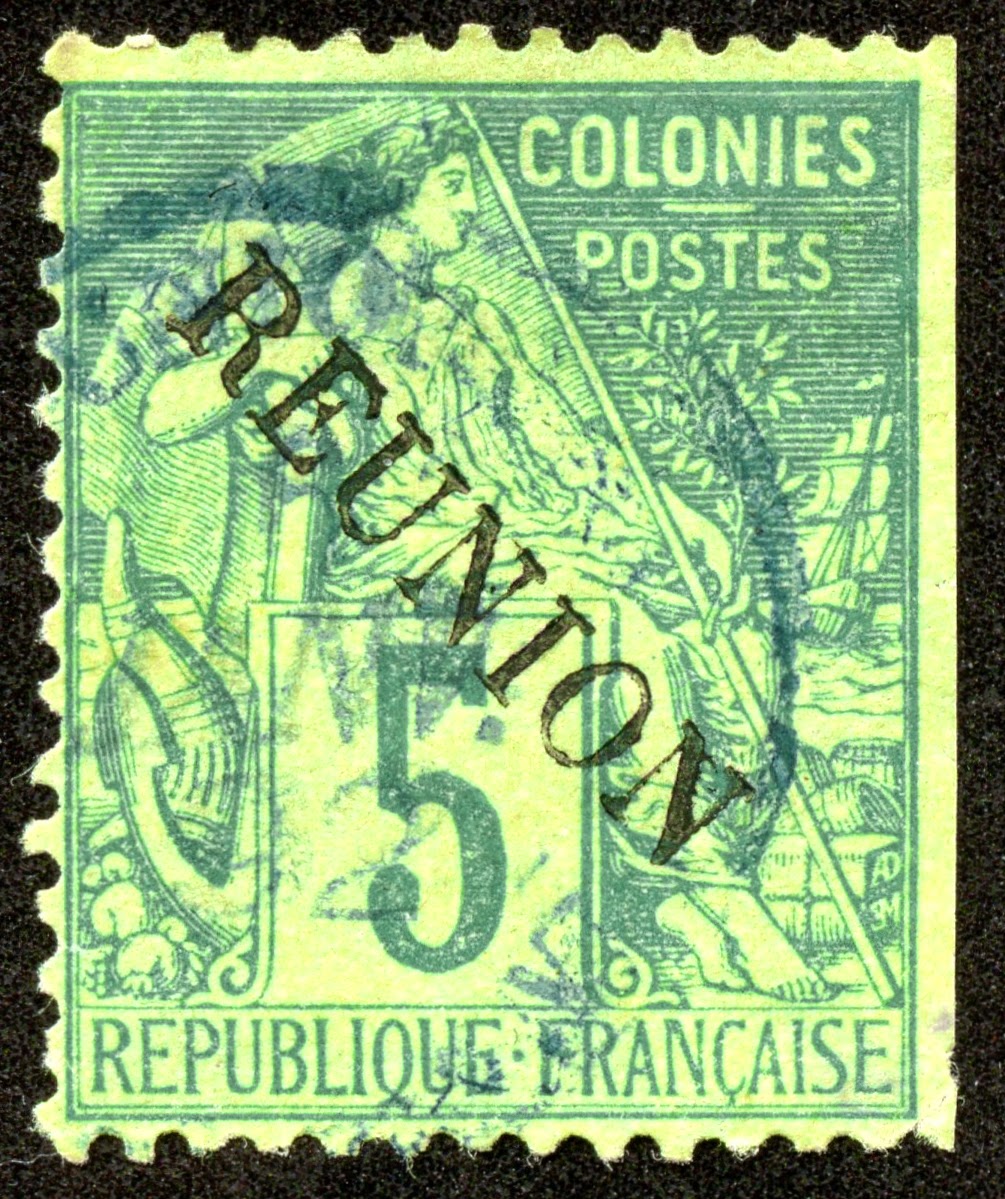 A twelve stamp issue was released in 1891, overprinting the stamps of the French Colonies. Of interest, the "Reunion" overprint can be found misspelled different ways. Scott lists 83 minor numbers for these spelling variations. 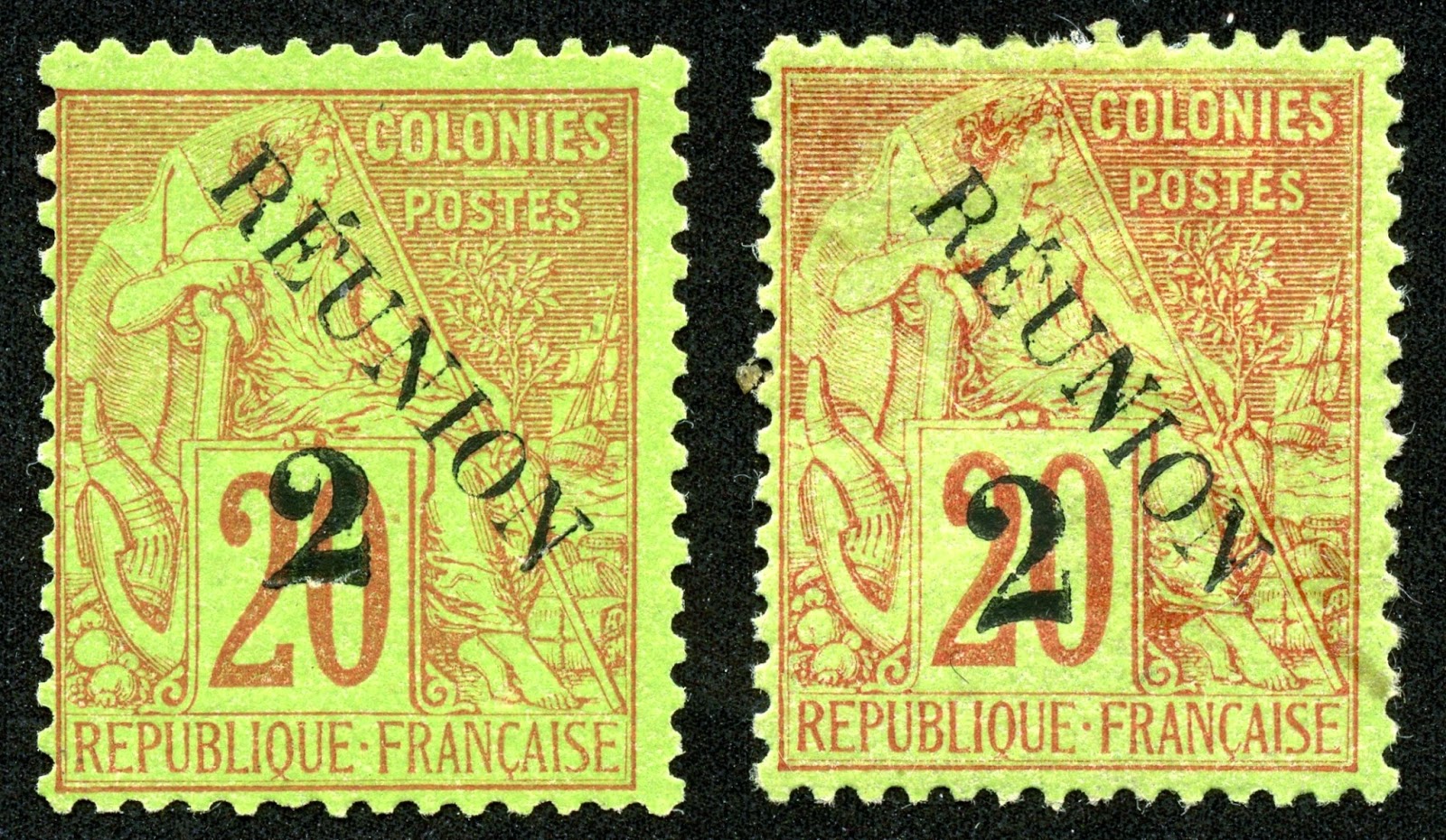 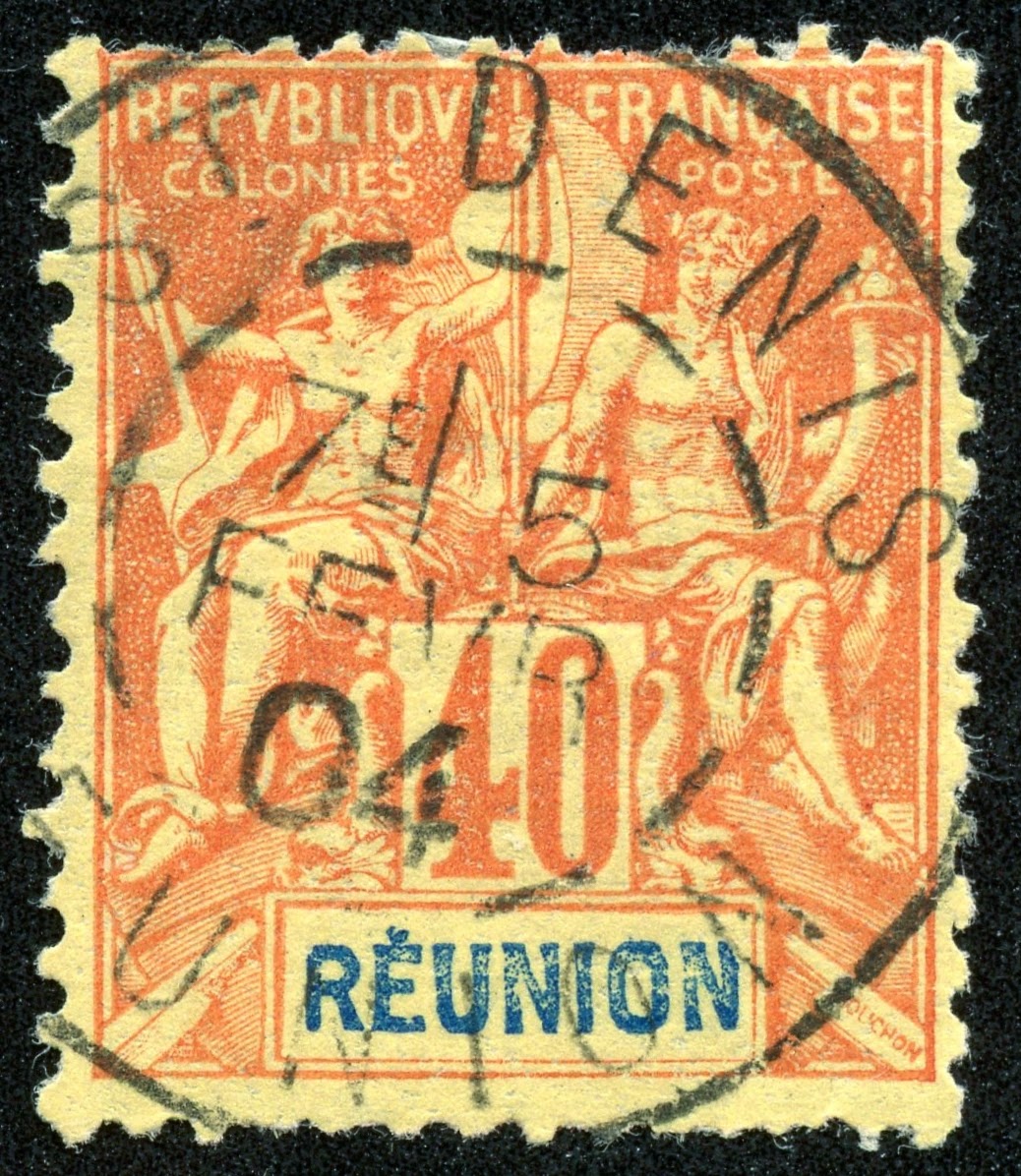 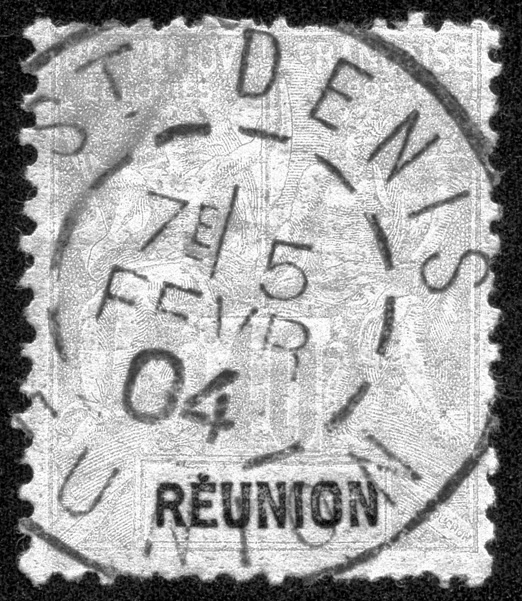 1892 Scott 47 40c "Navigation and Commerce"
Postmark emphasized with segmented Image
Have you, at times, wished to enhance the postmark on a stamp, perhaps for clarification? I took the preceding Scott 47 40c, and submitted it to retroreveal.org, a website from the University of Utah that helps recover "hidden content" from manuscripts and  documents - and in this case, a stamp,- by segmenting the RGB image. 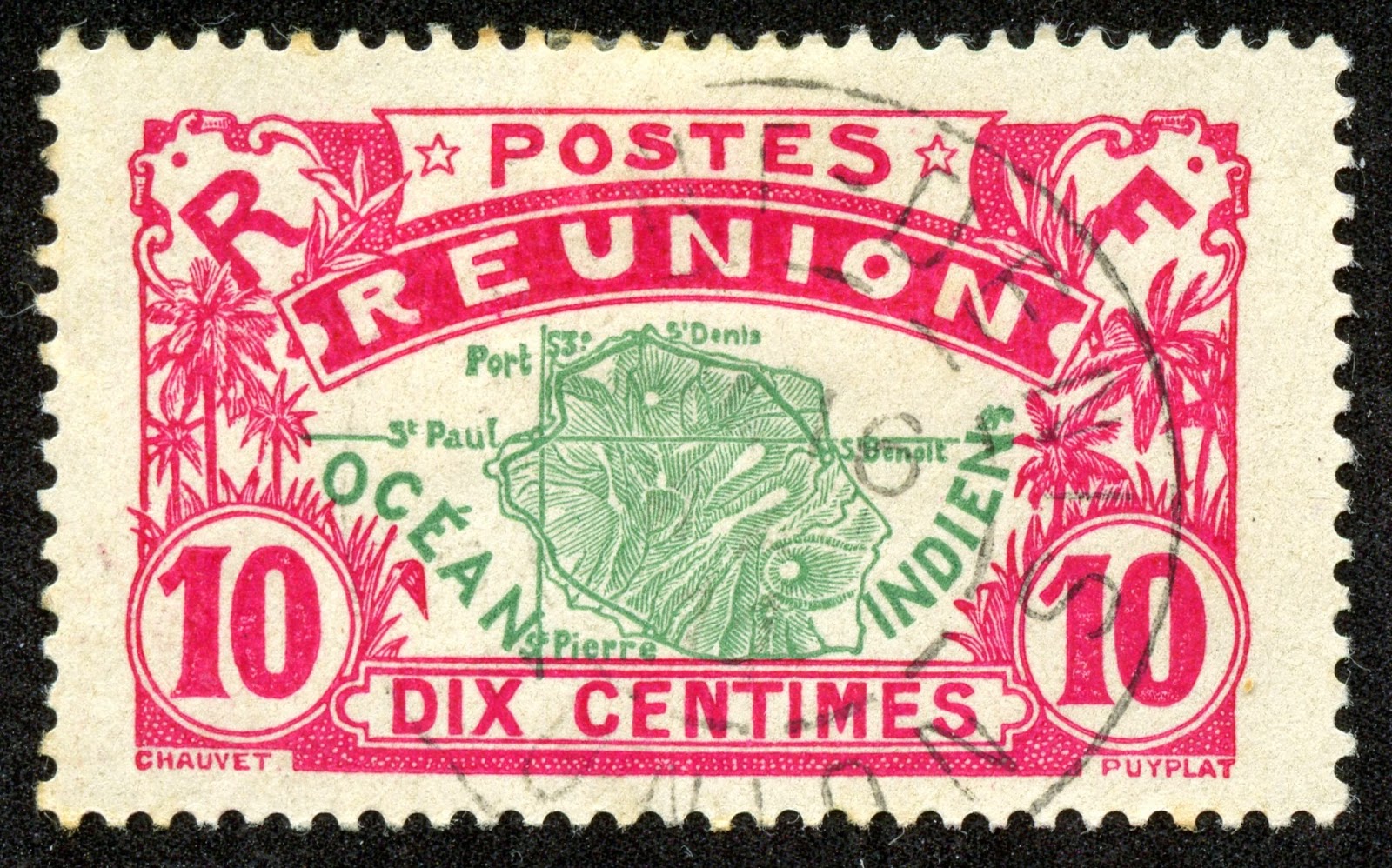 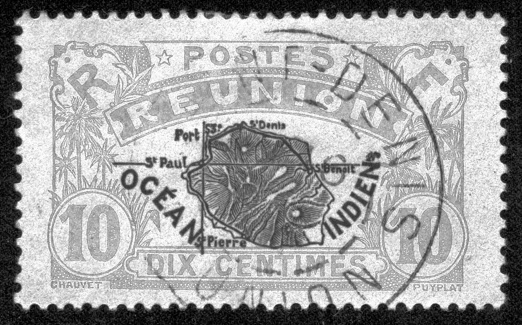 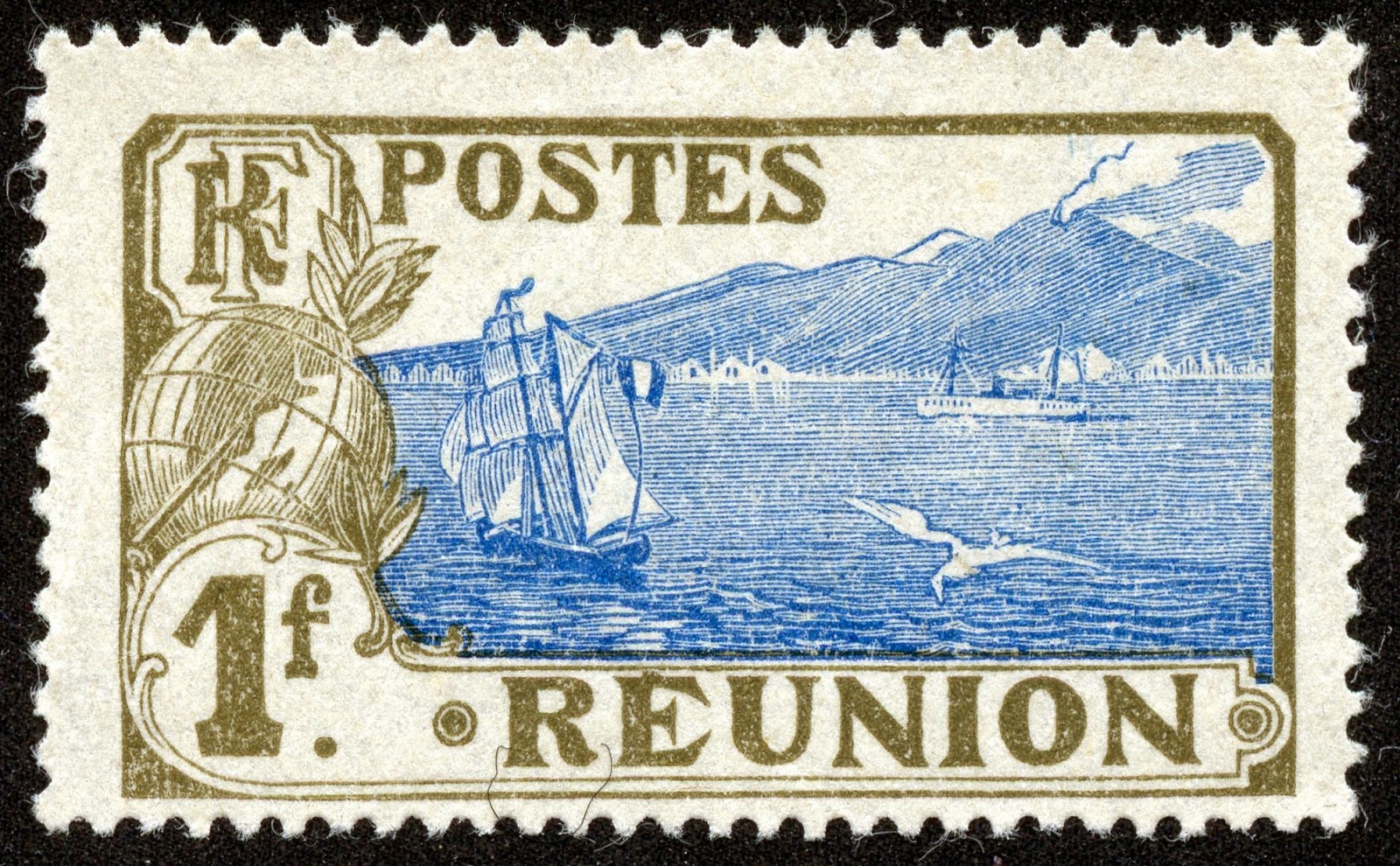 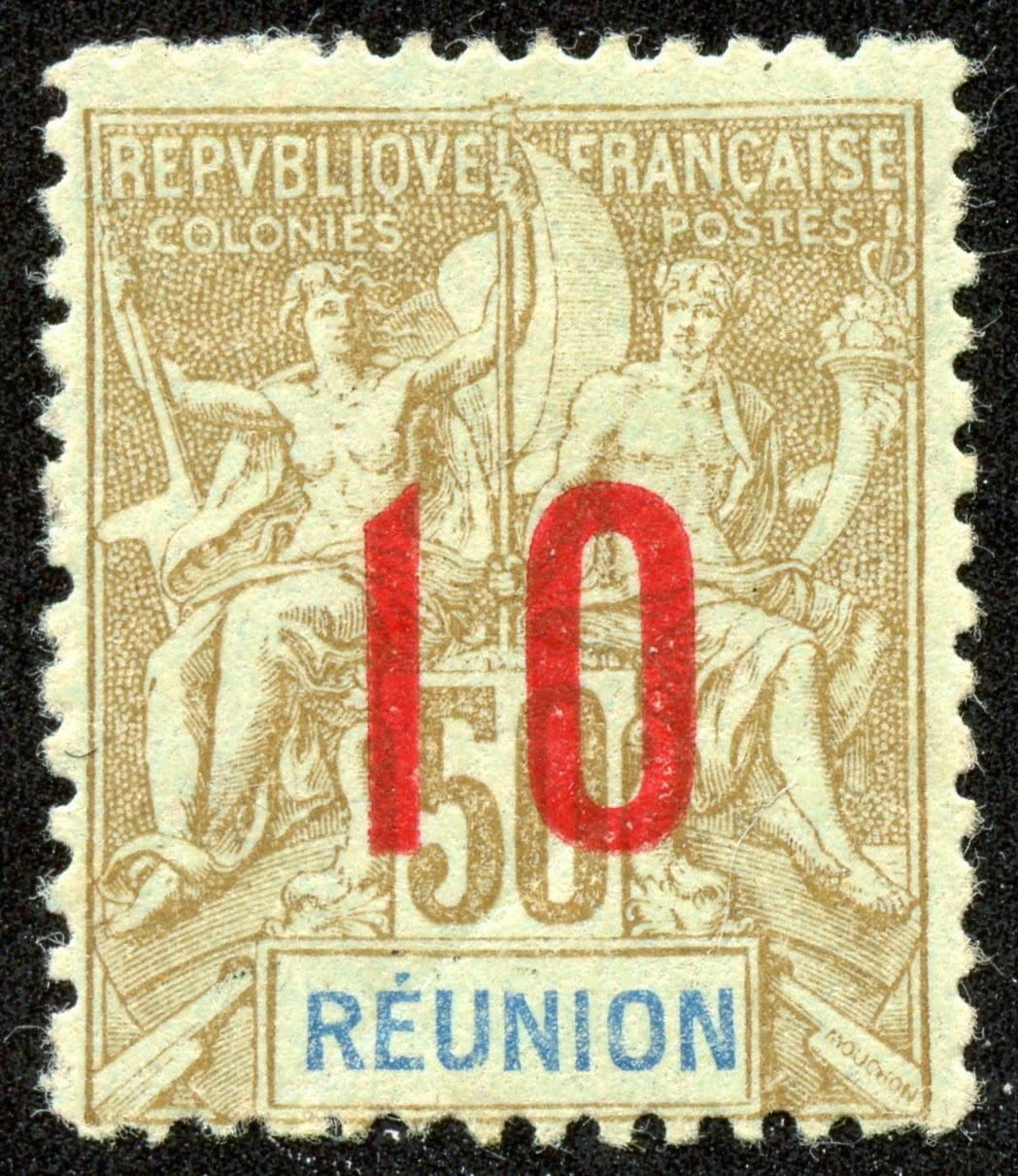 1912 Scott 105 10c on 50c brown/azure
Carmine Surcharge
Eight stamps from the 1892-1900 issue were surcharged in black or carmine, and issued in 1912. Many French colonies also have this surcharged issue. Recall that a wider spacing between the figures of the surcharge are catalogued as minor numbers, and have a higher CV. 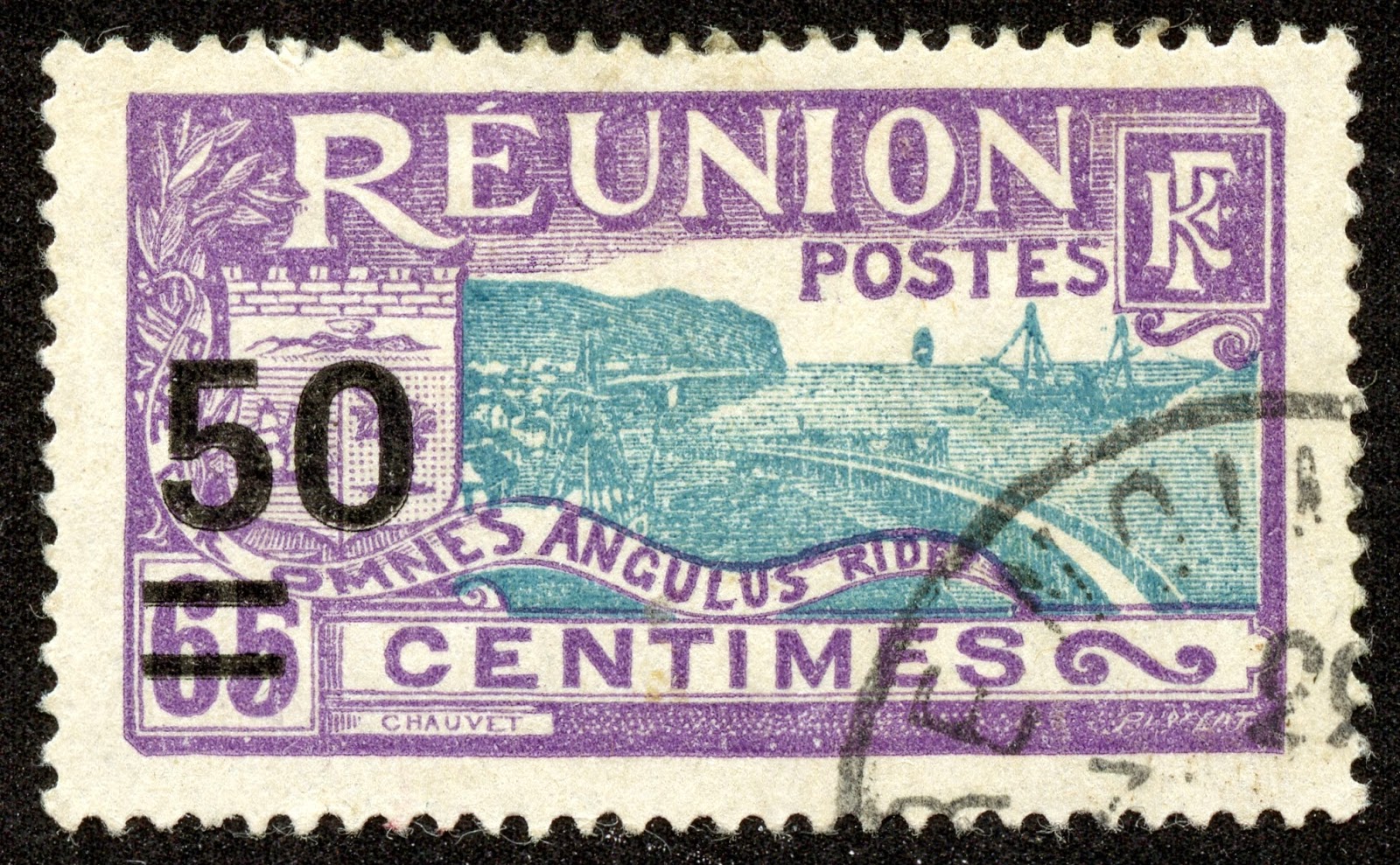 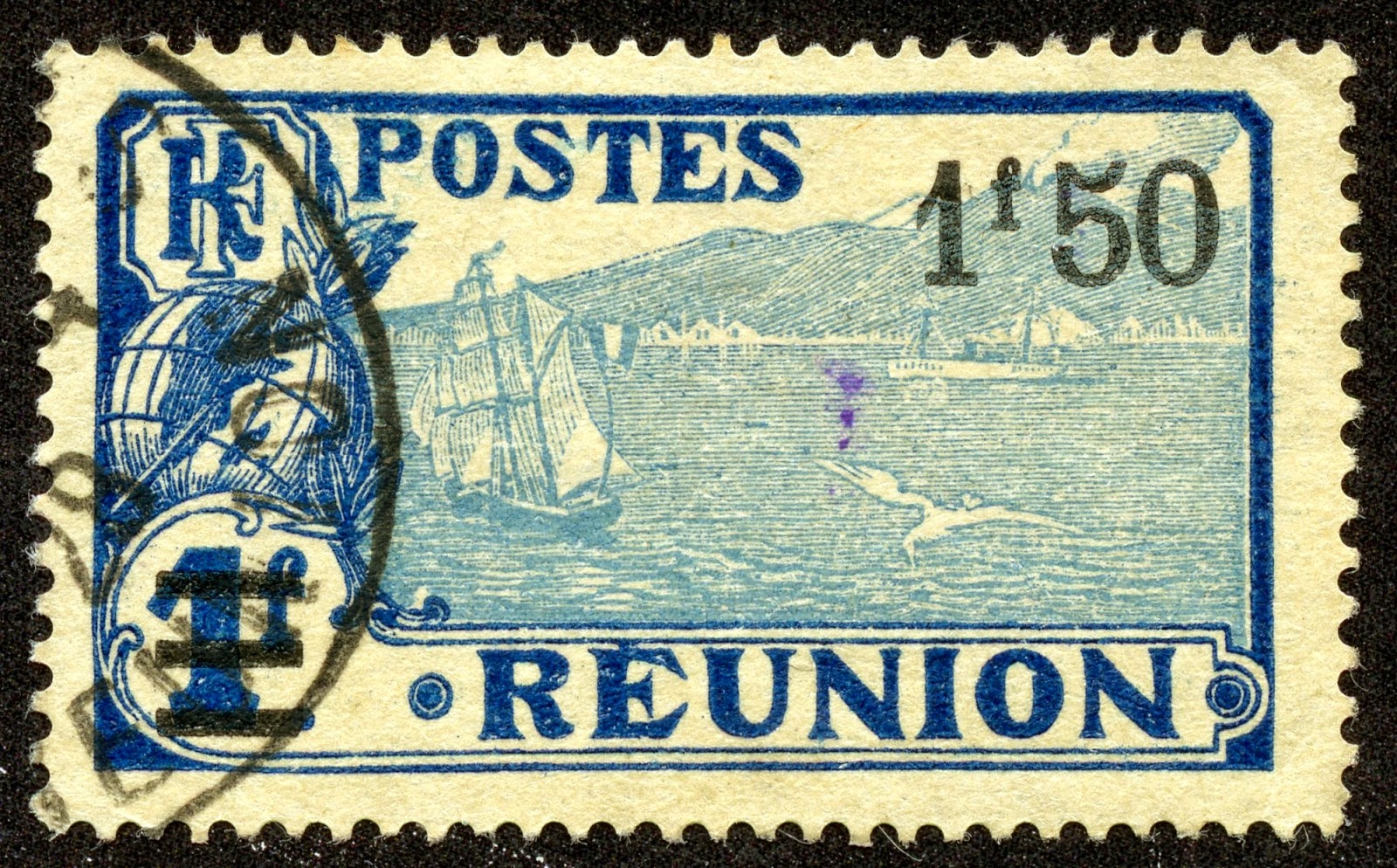 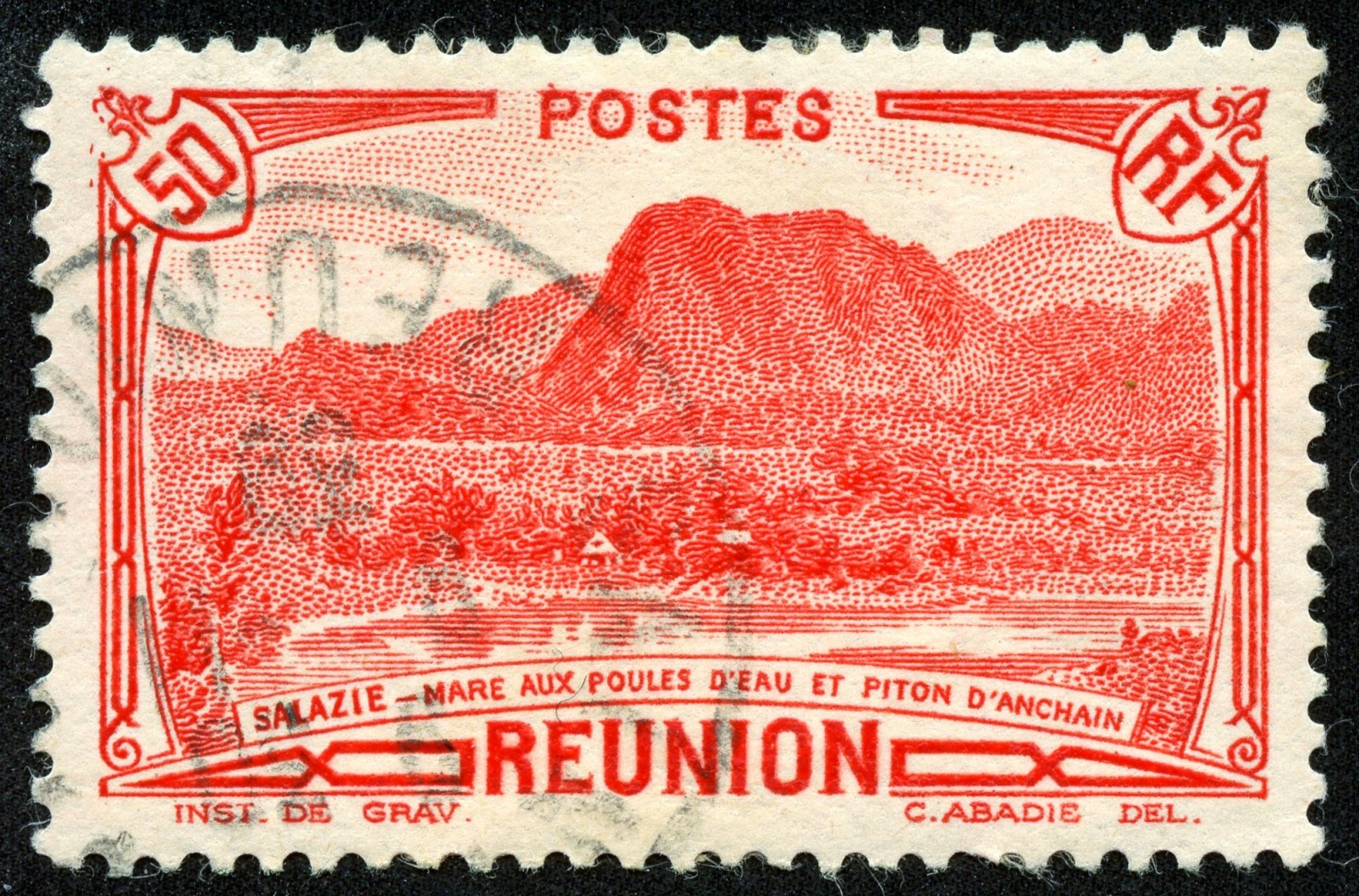 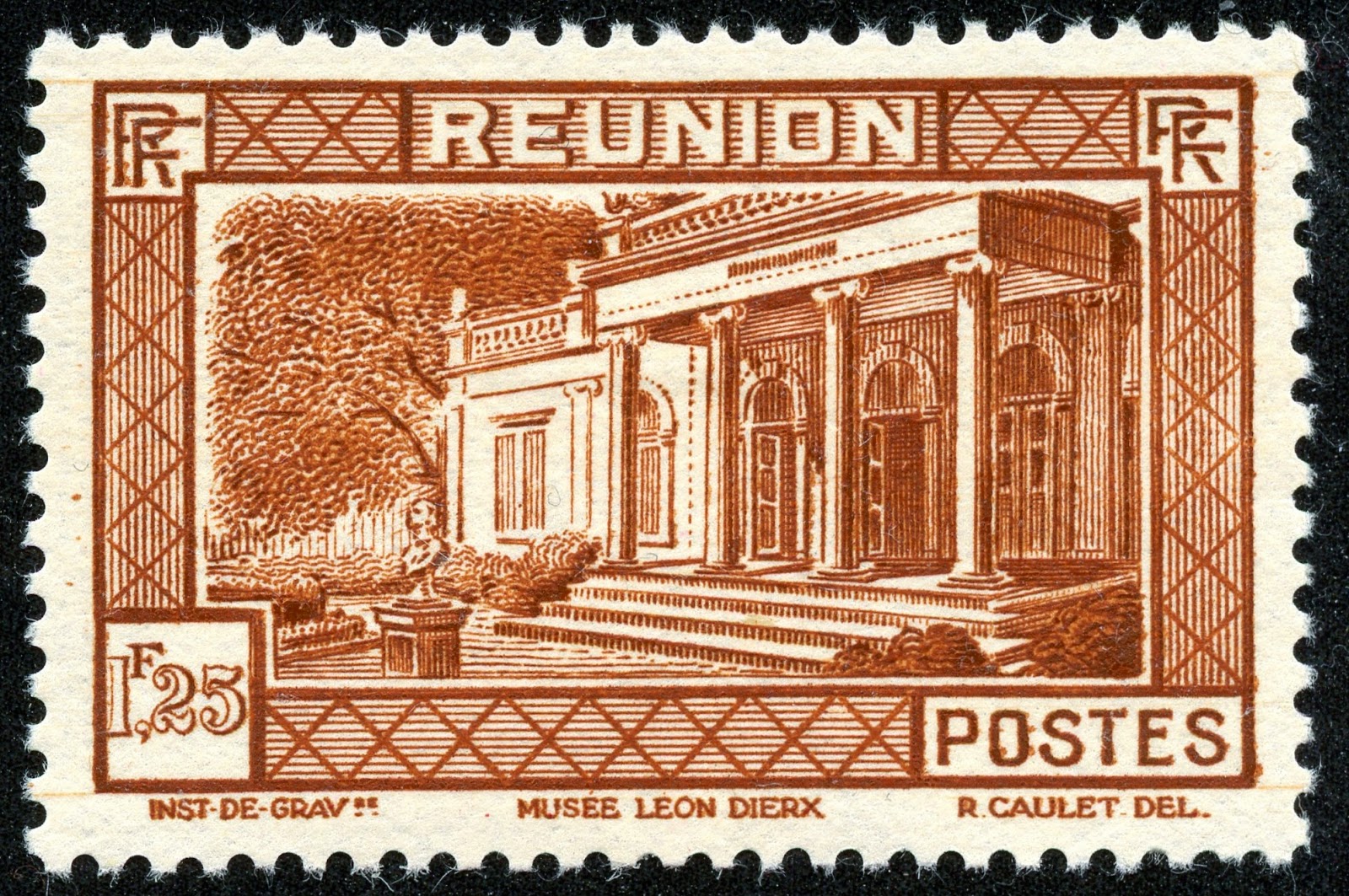 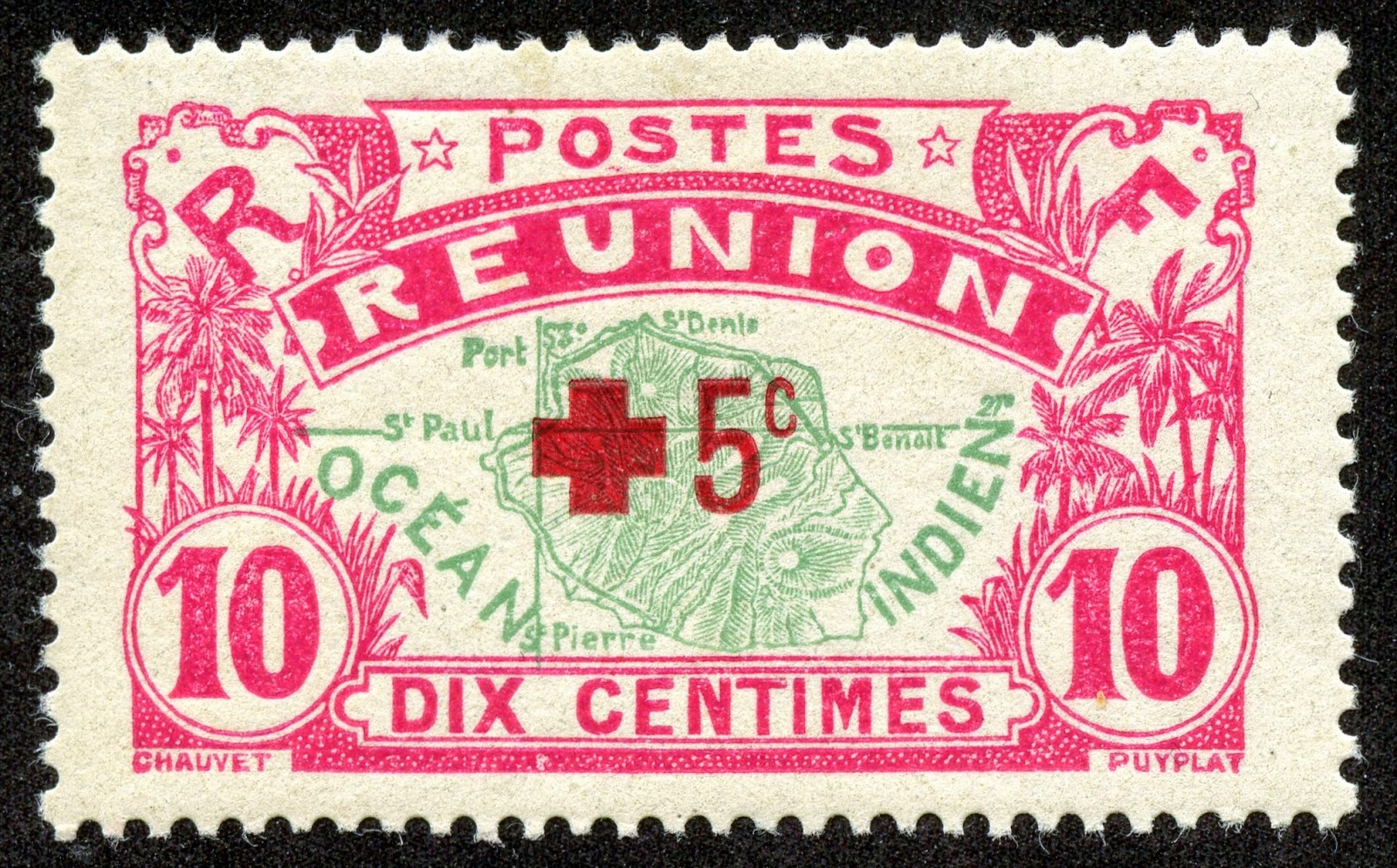 1916 Scott B3 10c + 5c carmine & green
Scott 65 Surcharged in Red
Three surcharged stamps between 1915-16 were issued as semipostals for the benefit of the Red Cross. 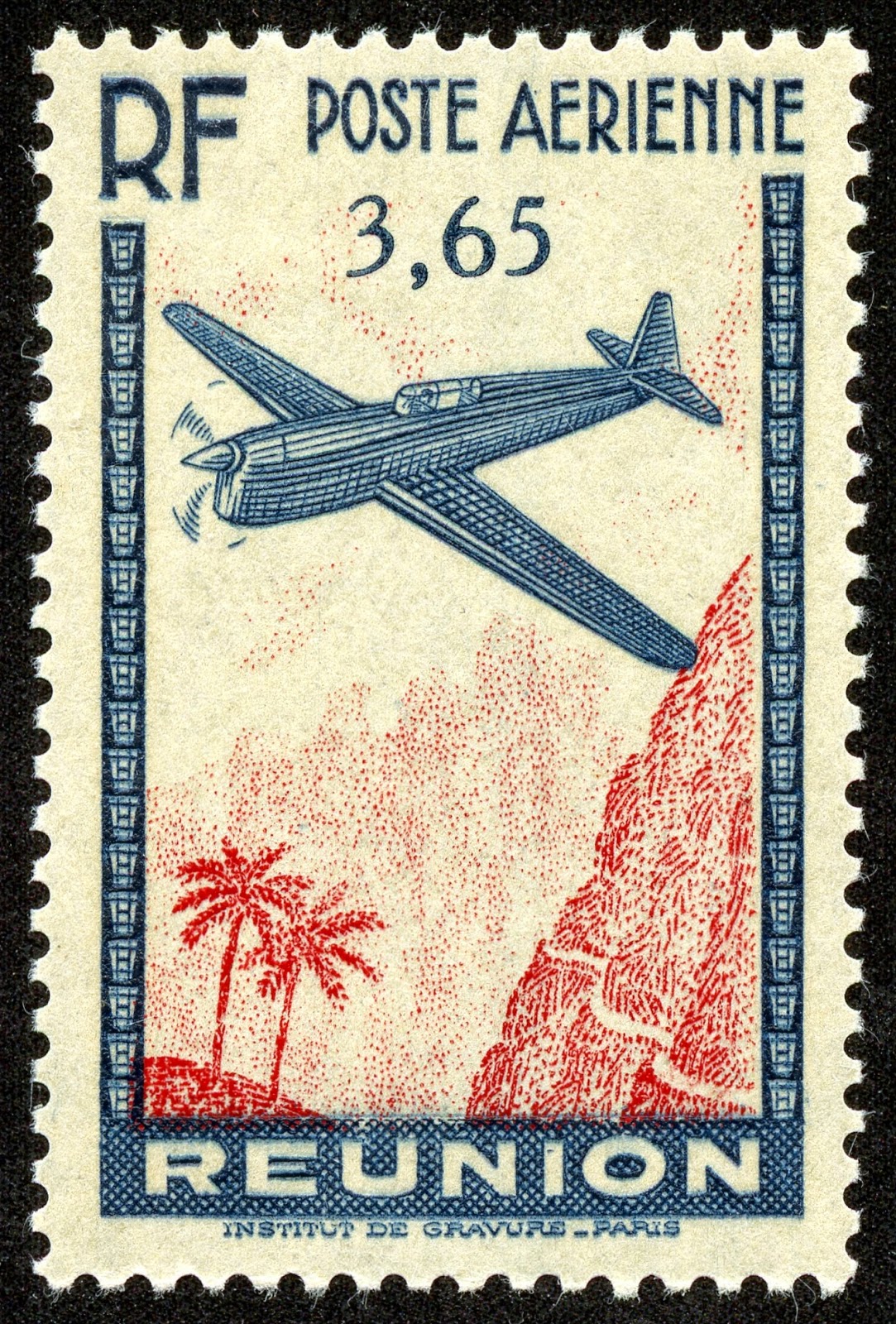 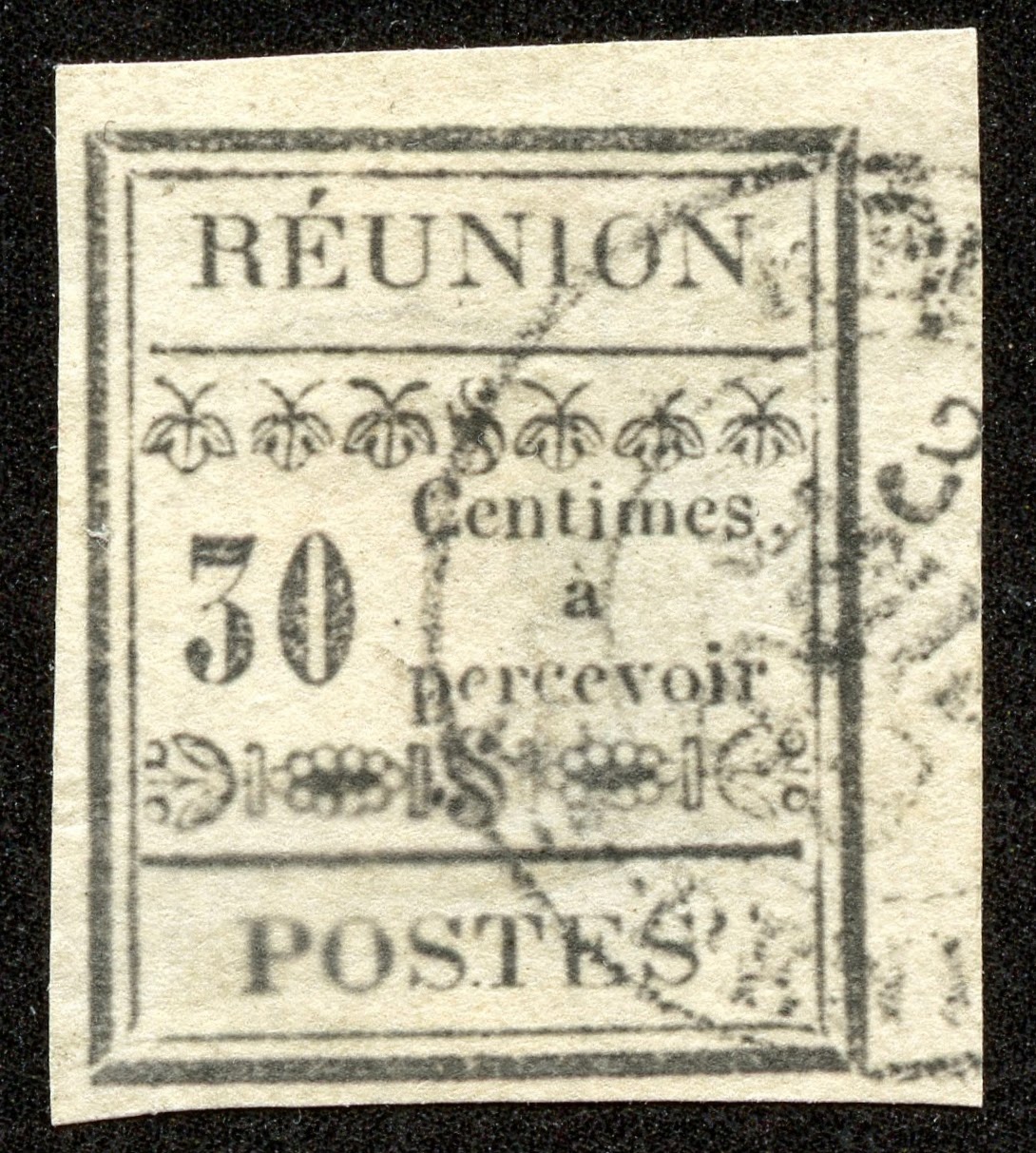 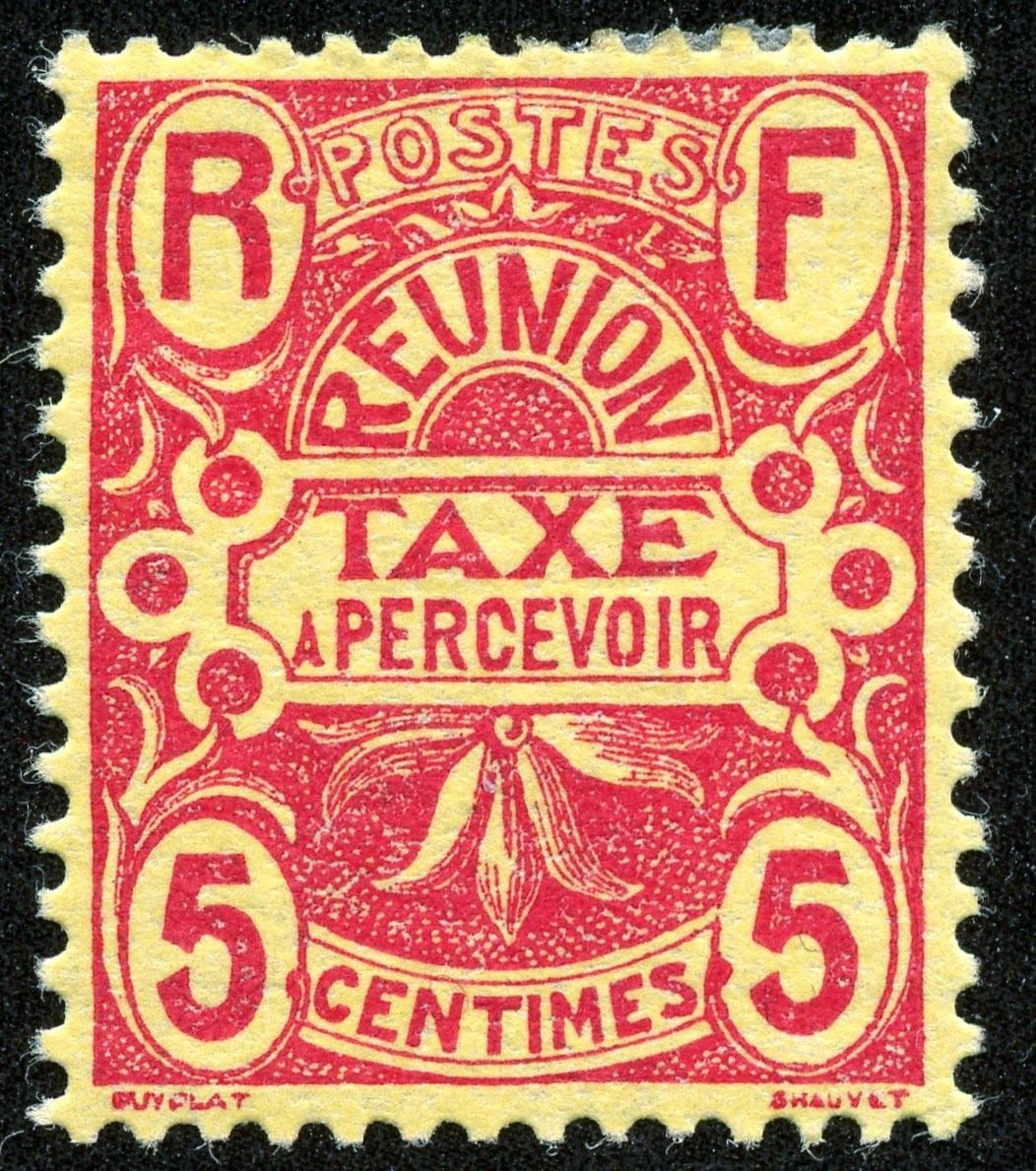 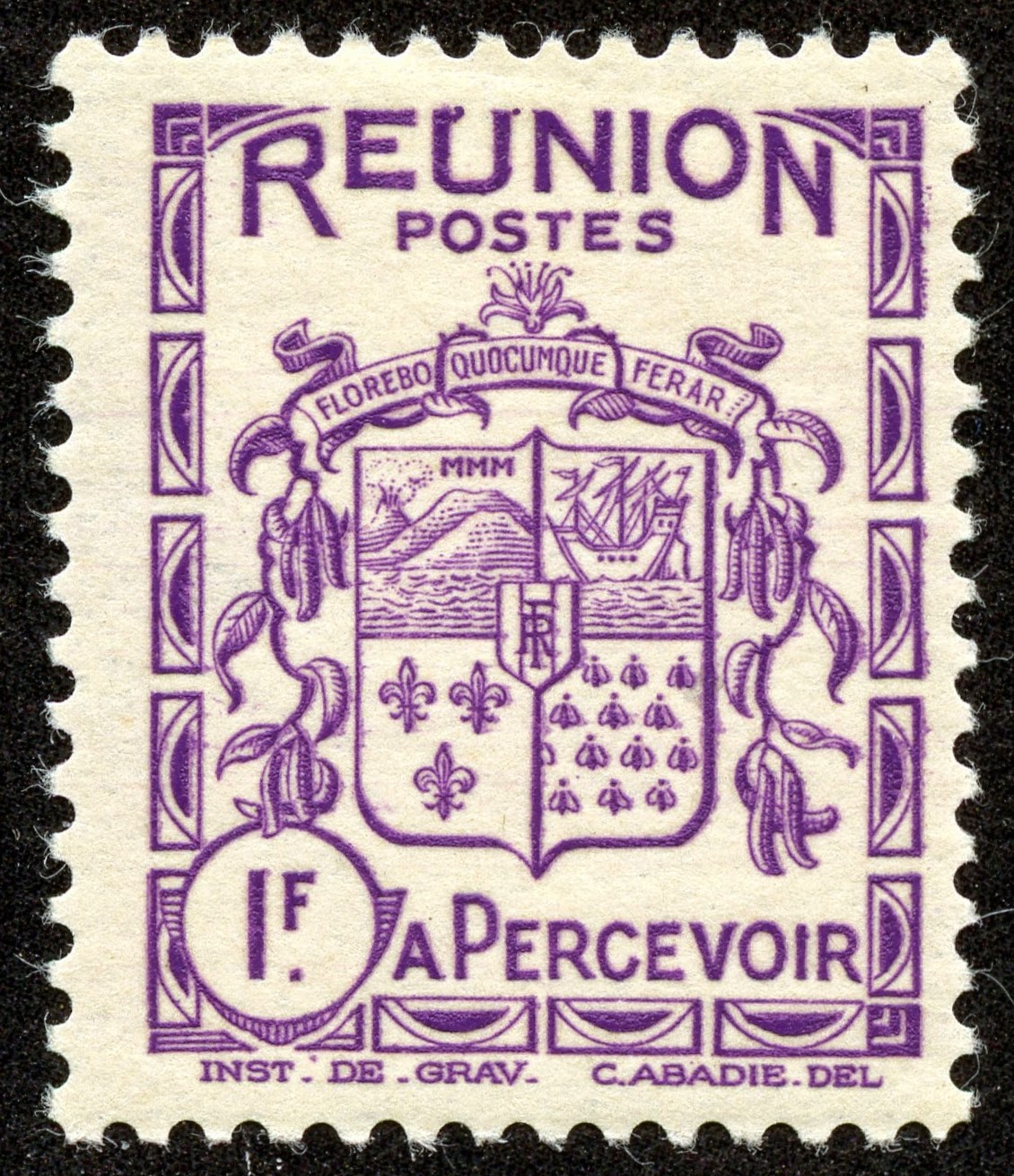 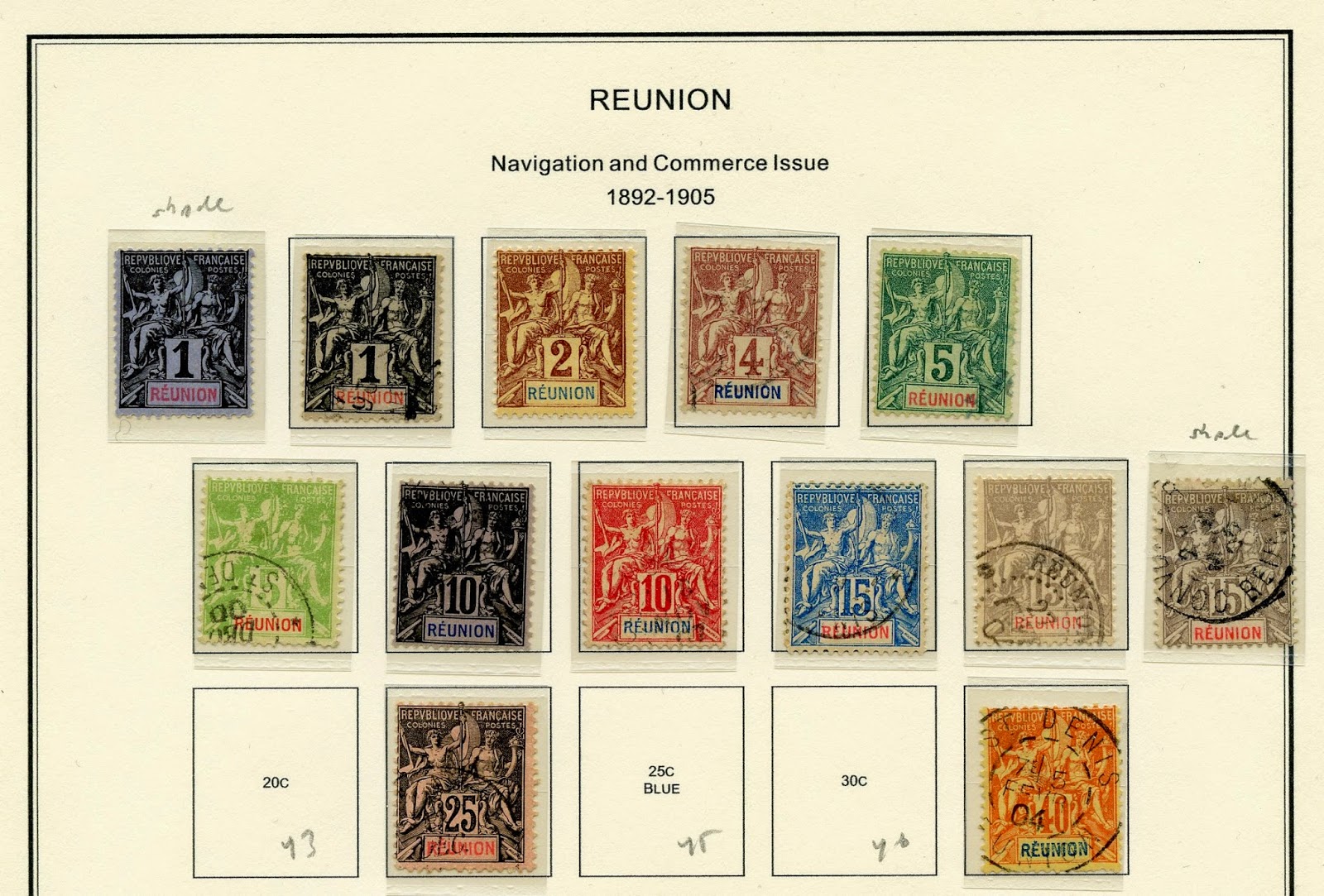 1892-1905 Navigation and Commerce Issue in Deep Blue
Deep Blue (Steiner) has 17 pages for Reunion, and includes a space for all the major Scott numbers.

The 1891 "Reunion" overprinted issue has many misspellings of "Reunion" that are noted as minor numbers (83 of them!) in the Scott catalogue. The Steiner does not provide spaces for these minor numbers, so one would need (a) quadrilled pages(s) for these - though, admittedly, this is more specialist territory. 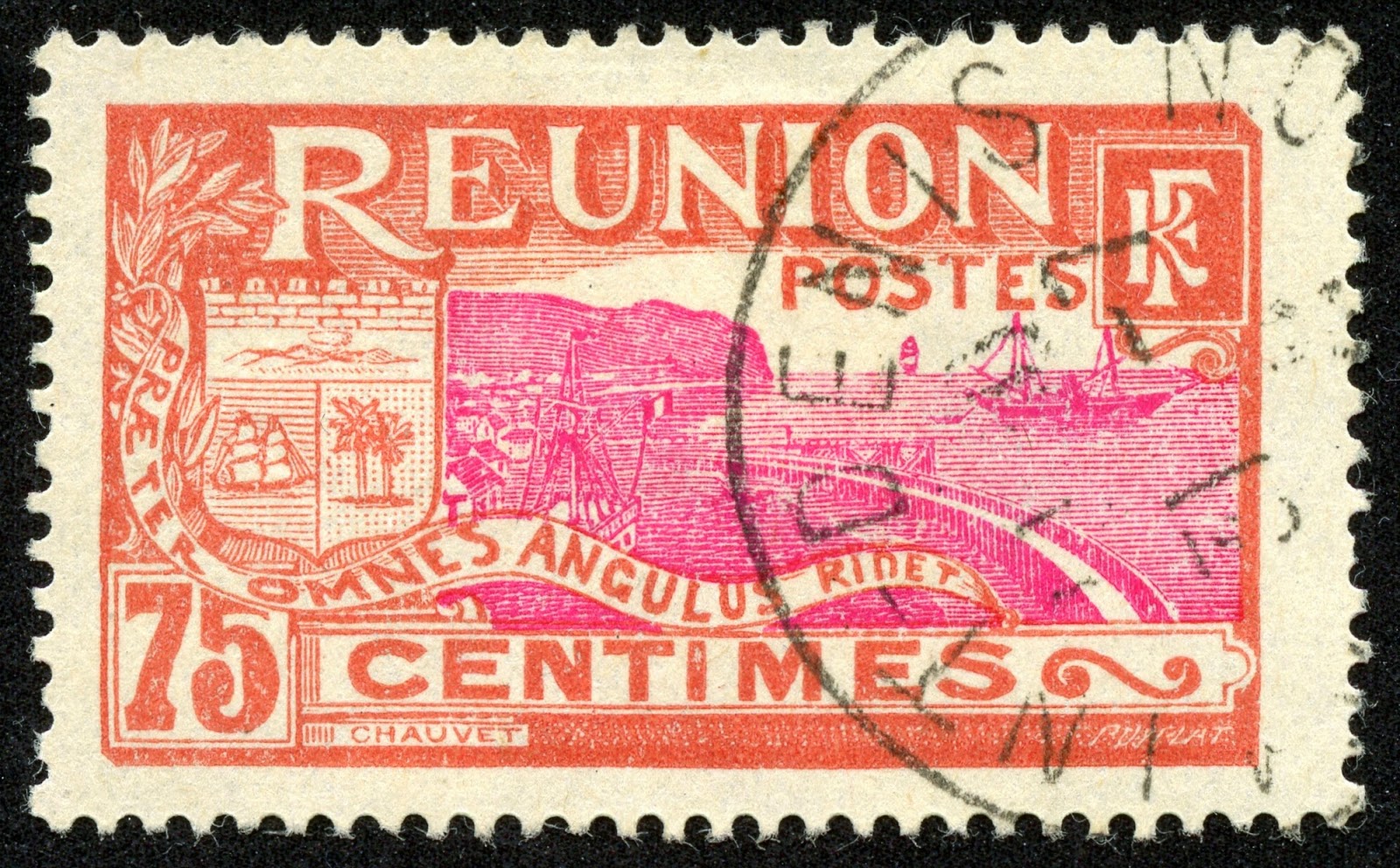 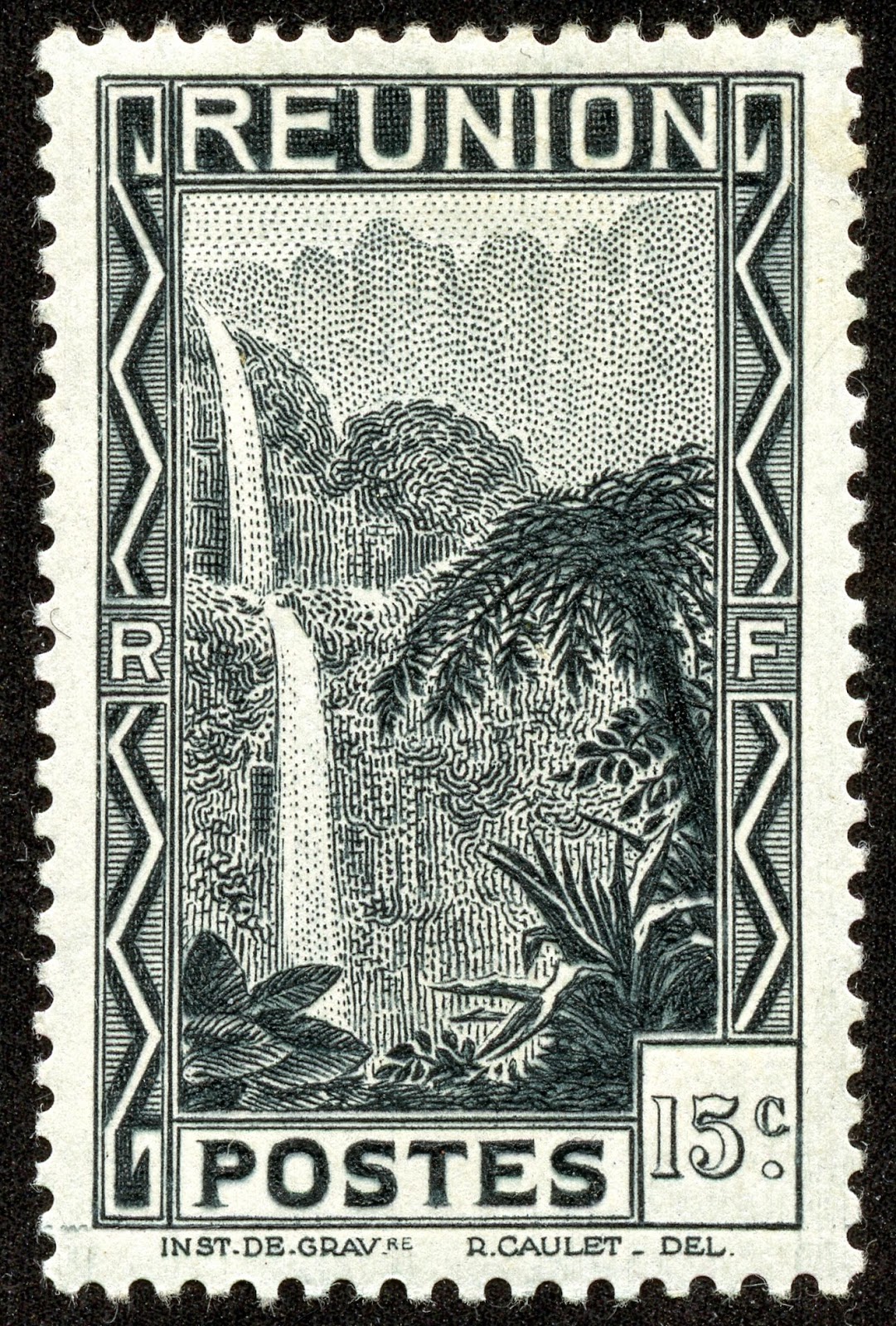 Note: Maps appear to be in the public domain. Thanks to retroveal.org website (University of Utah) for the two segmented images of my stamps.