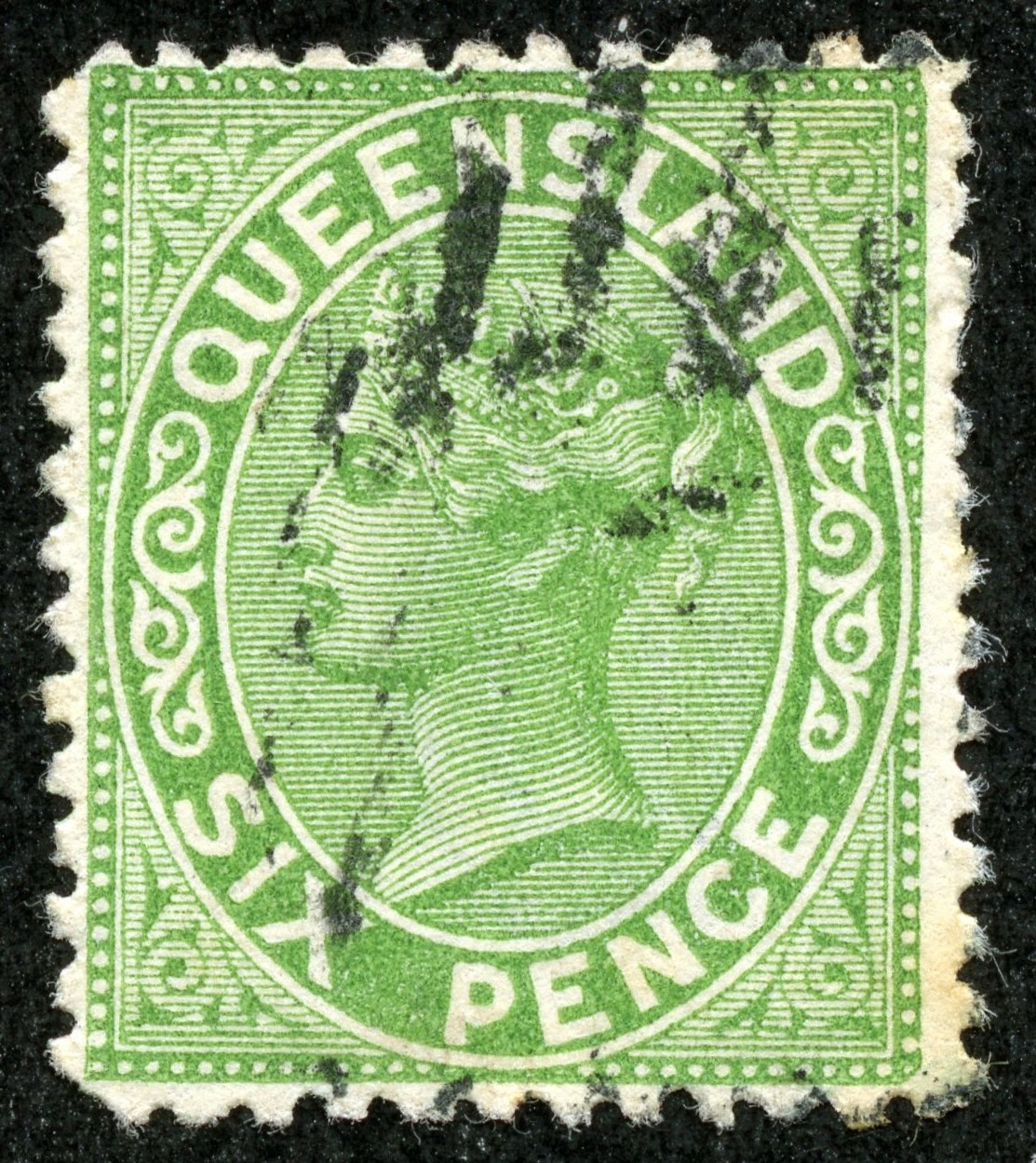 1882 Scott 69 6p yellow green "Victoria"
Quick History
"Queensland Day" is celebrated every year on June 6th, as that was when Queen Victoria in 1859 signed the Letters Patent separating Queensland from New South Wales. Queensland then became a founding state within the Federation of Australia on January 1, 1901. 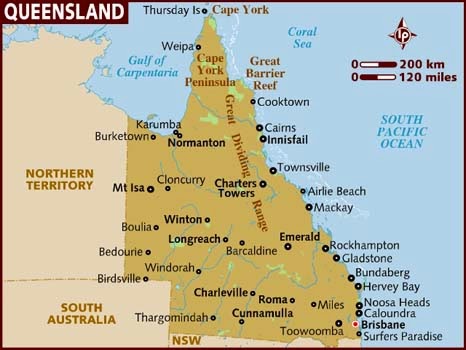 Map of Queensland
No longer part of New South Wales, stamps for Queensland proper were introduced on November 1, 1860. Stamps were issued through 1909, as the Australia 'Roo stamps did not begin until 1913.

Early on, Queensland had wars with the Aborigines- as there existed a larger indigenous population in Queensland than other sections of Australia. The 1857 Hornet Bank massacre of eleven Europeans on the upper Dawson River resulted in the entire extermination of the Yeeman tribe (300 Aborigines) in 1858.

Queensland is blessed with abundant natural beauty, and has six World Heritage listed areas. The Great Barrier Reef, in particular, has 70 bioregions. All three of my (adult) children have scuba dived off the reef.

Truth be told, Queensland has uncomfortably hot,sticky, and sultry summers along the coast. But with the advent of air conditioning, Queensland became, until recent times, the fastest growing State in Australia- presently 4,500,000. 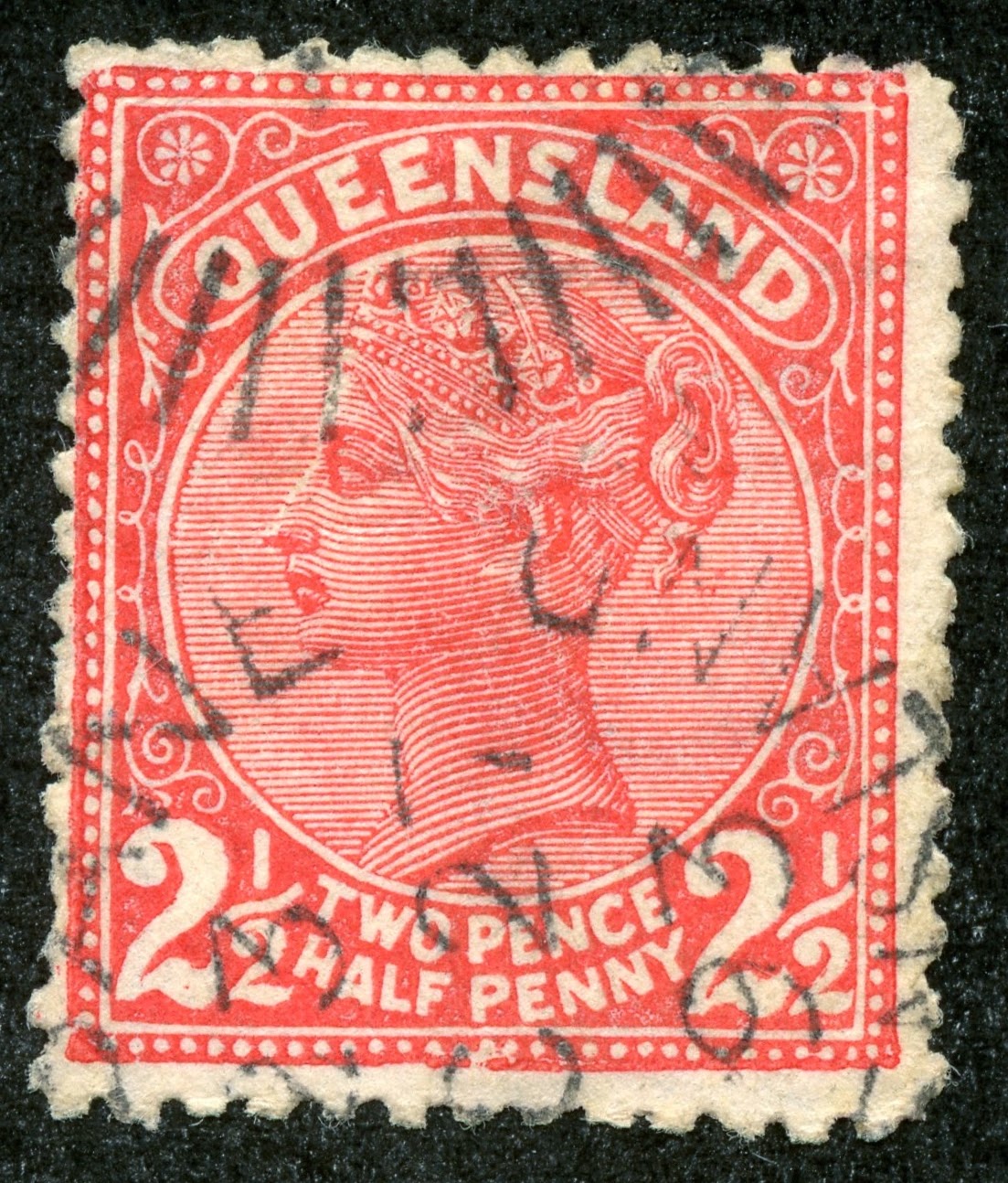 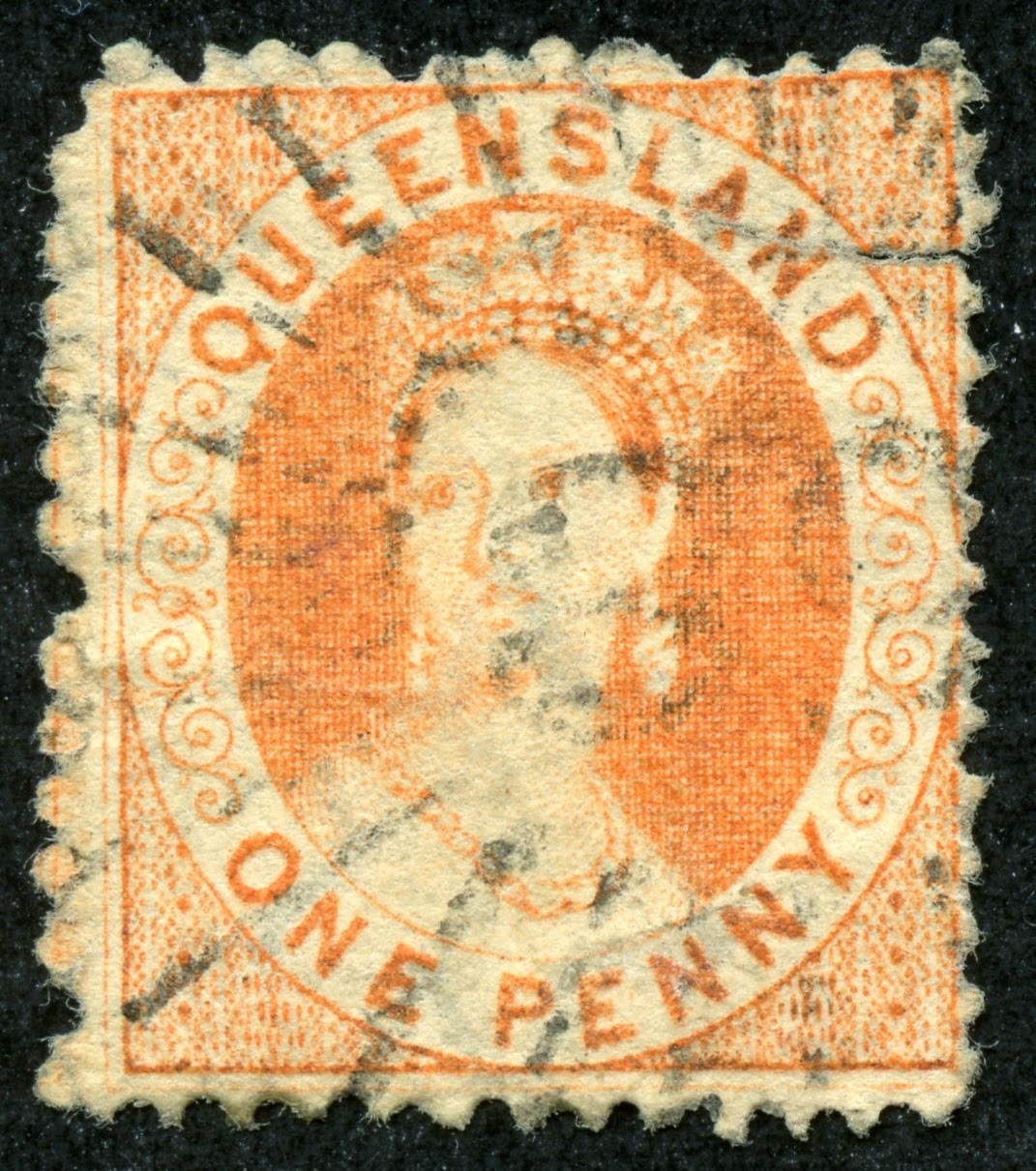 1871 Scott 25 1p orange
This rather tattered specimen shows an example of the Queen Victoria images on the earlier stamps of Queensland. As one would expect for a colony named after the Queen, all the stamp images for Queensland have some type of portrait of Victoria.

Watermark 67 "short pointed star" is on this issue. 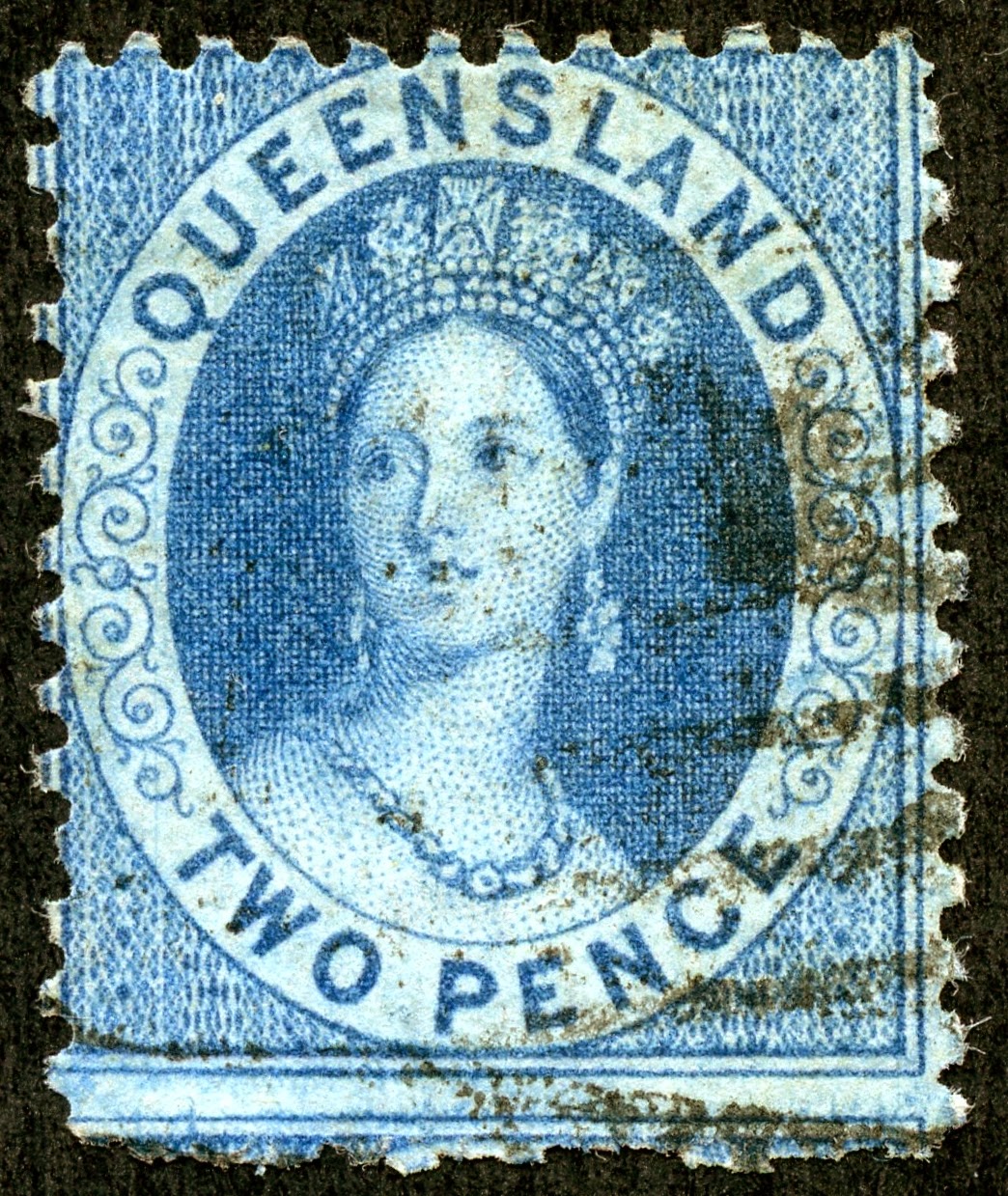 1876-78 Scott 46 2p blue
The perforations tend to cut into the design on earlier Queensland stamps, and this example is no exception. 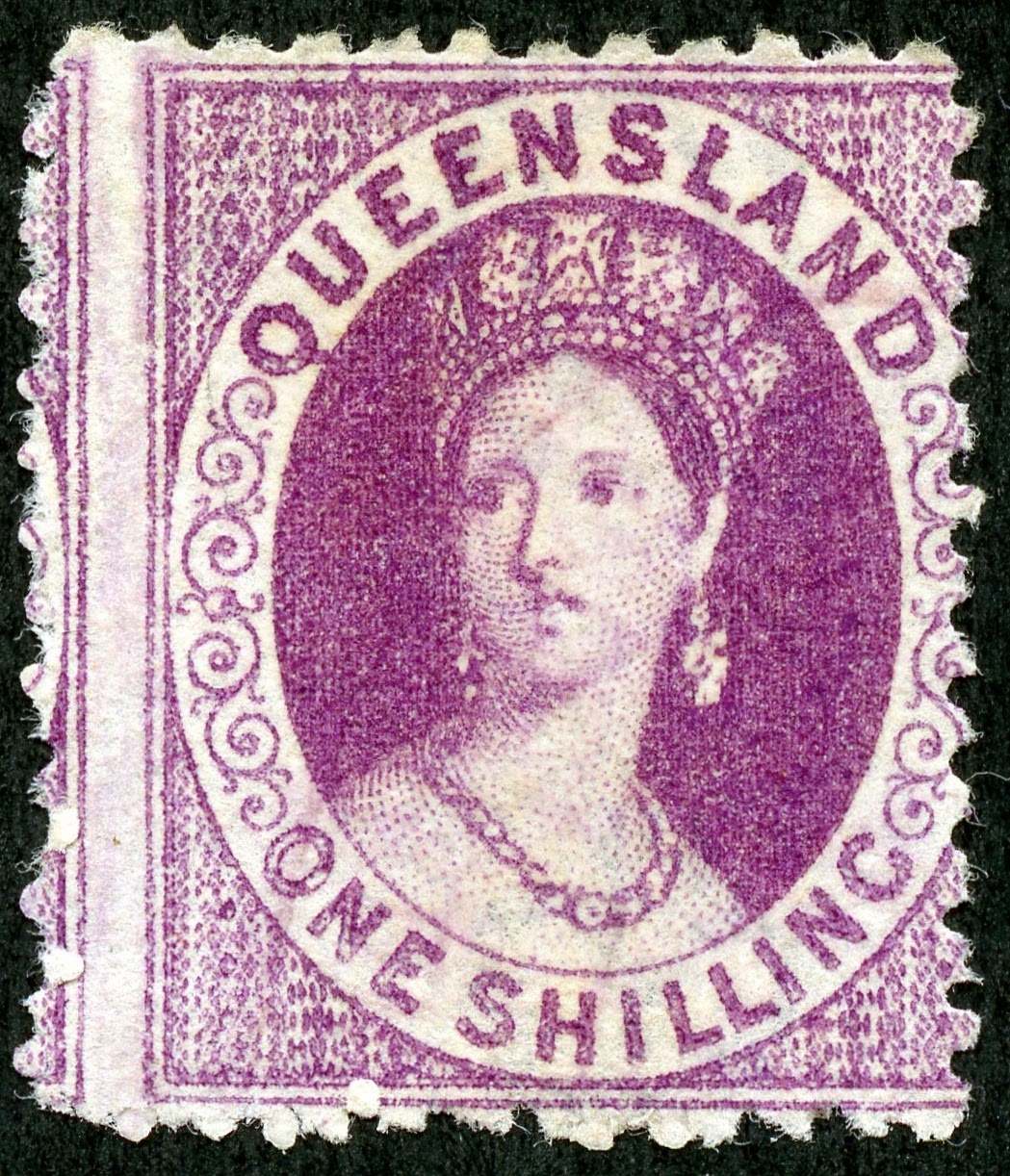 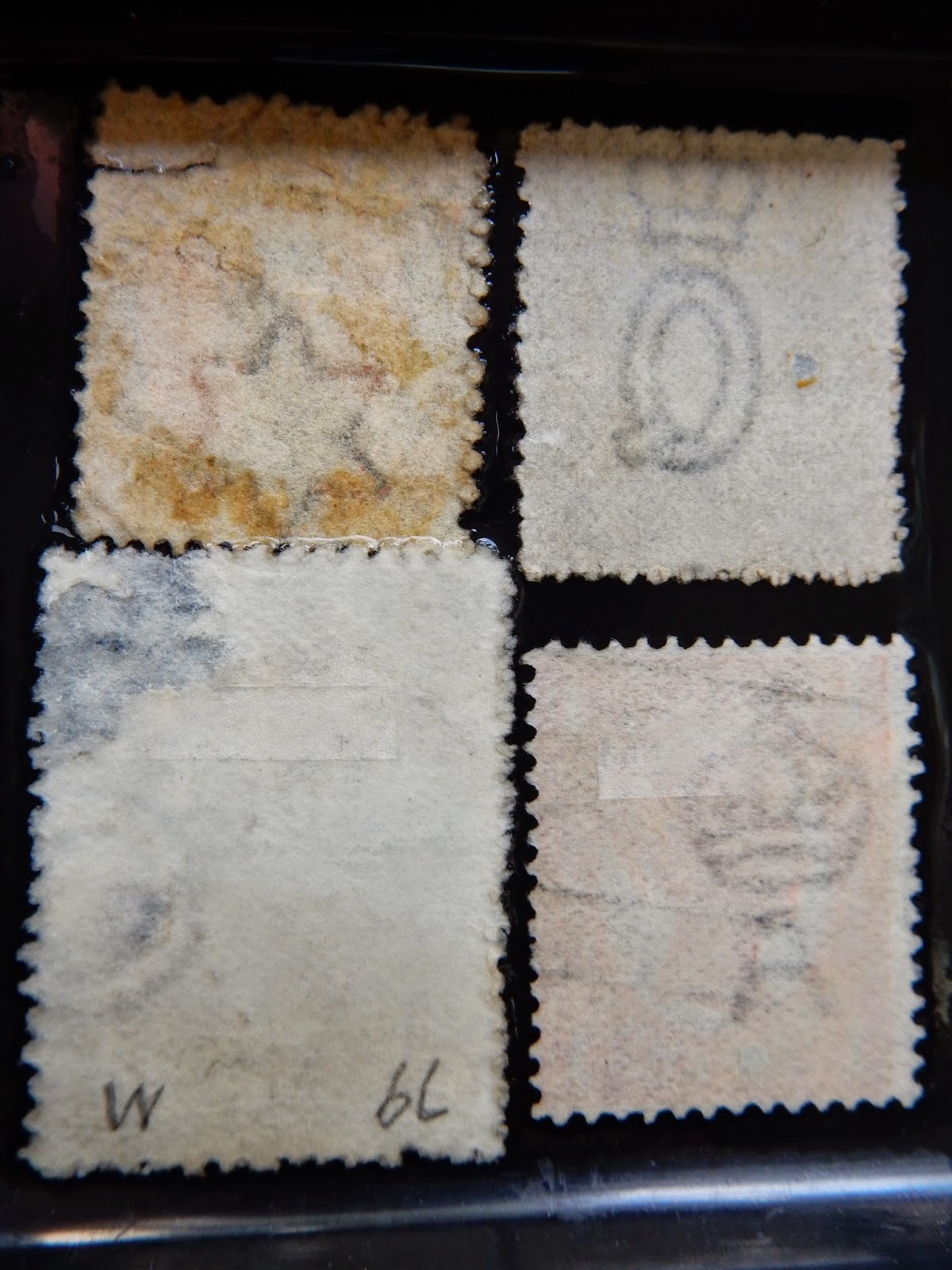 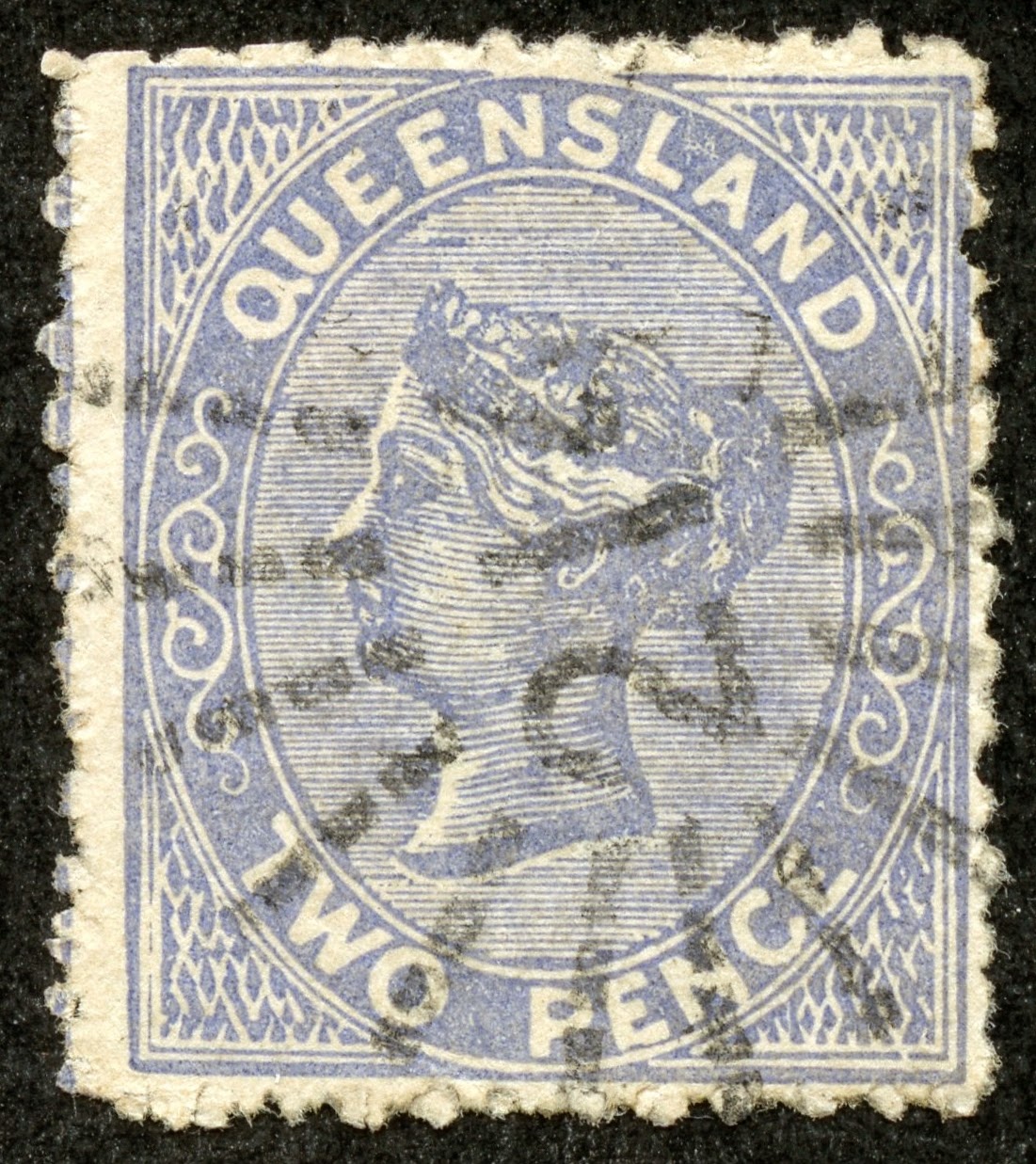 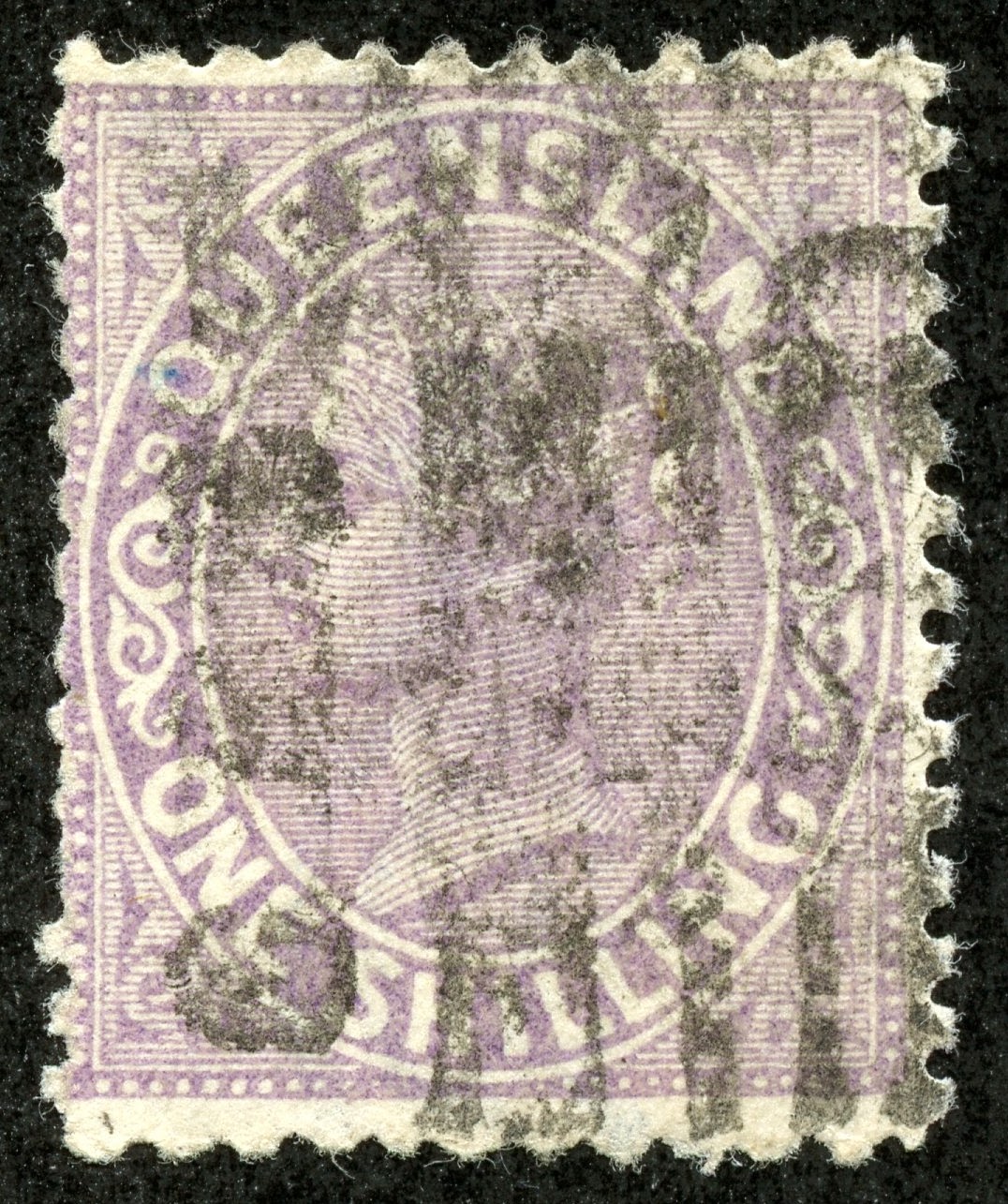 1883 Scott 70 1sh violet
The 1882-83 five stamp issue has a somewhat different design compared to the 1879-81 issue. Note the "Queensland" script is larger, and the corner designs are different.

Also note the neck shading lines are drawn all the way through to the front of the neck. (The later redrawn version will show differences here.) 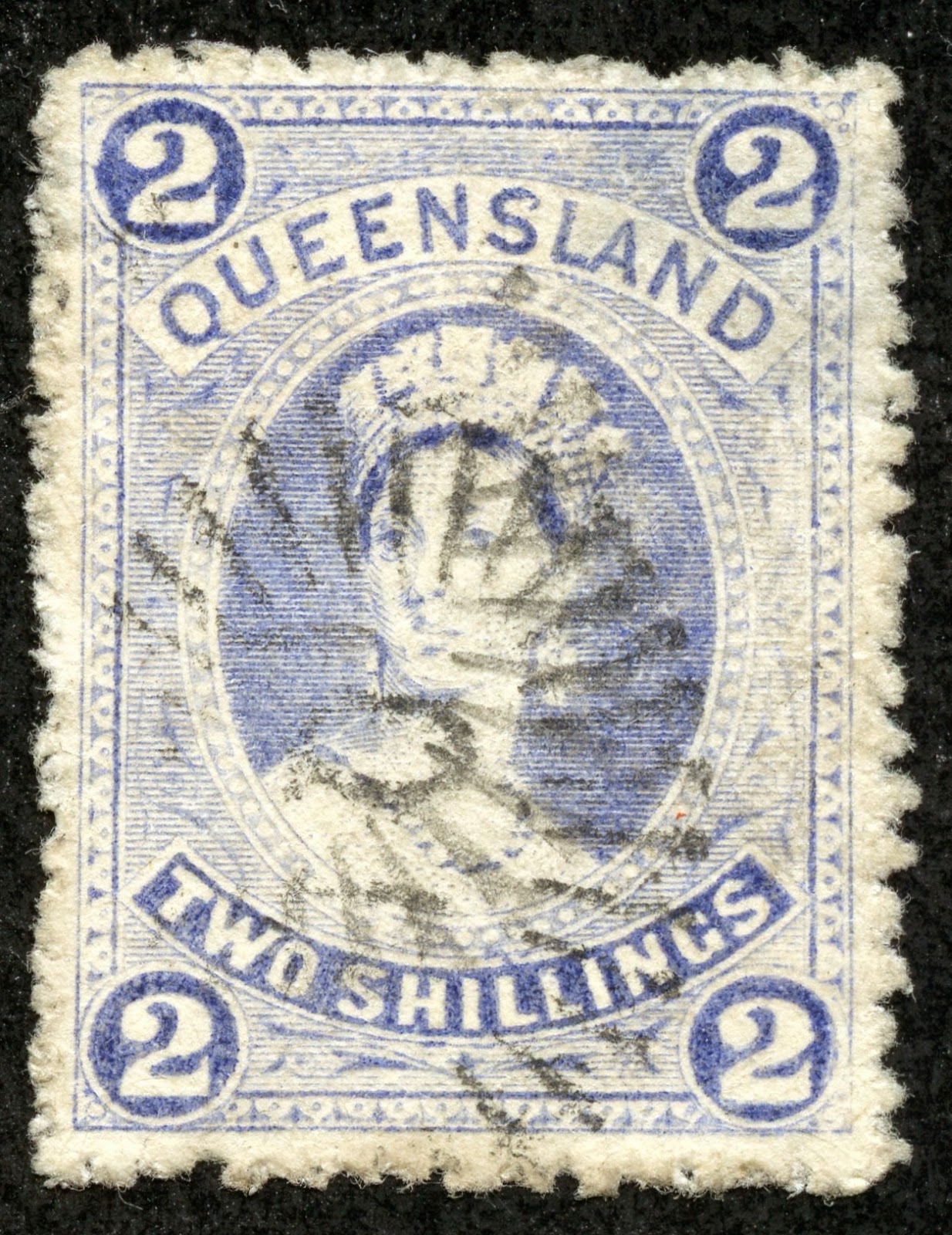 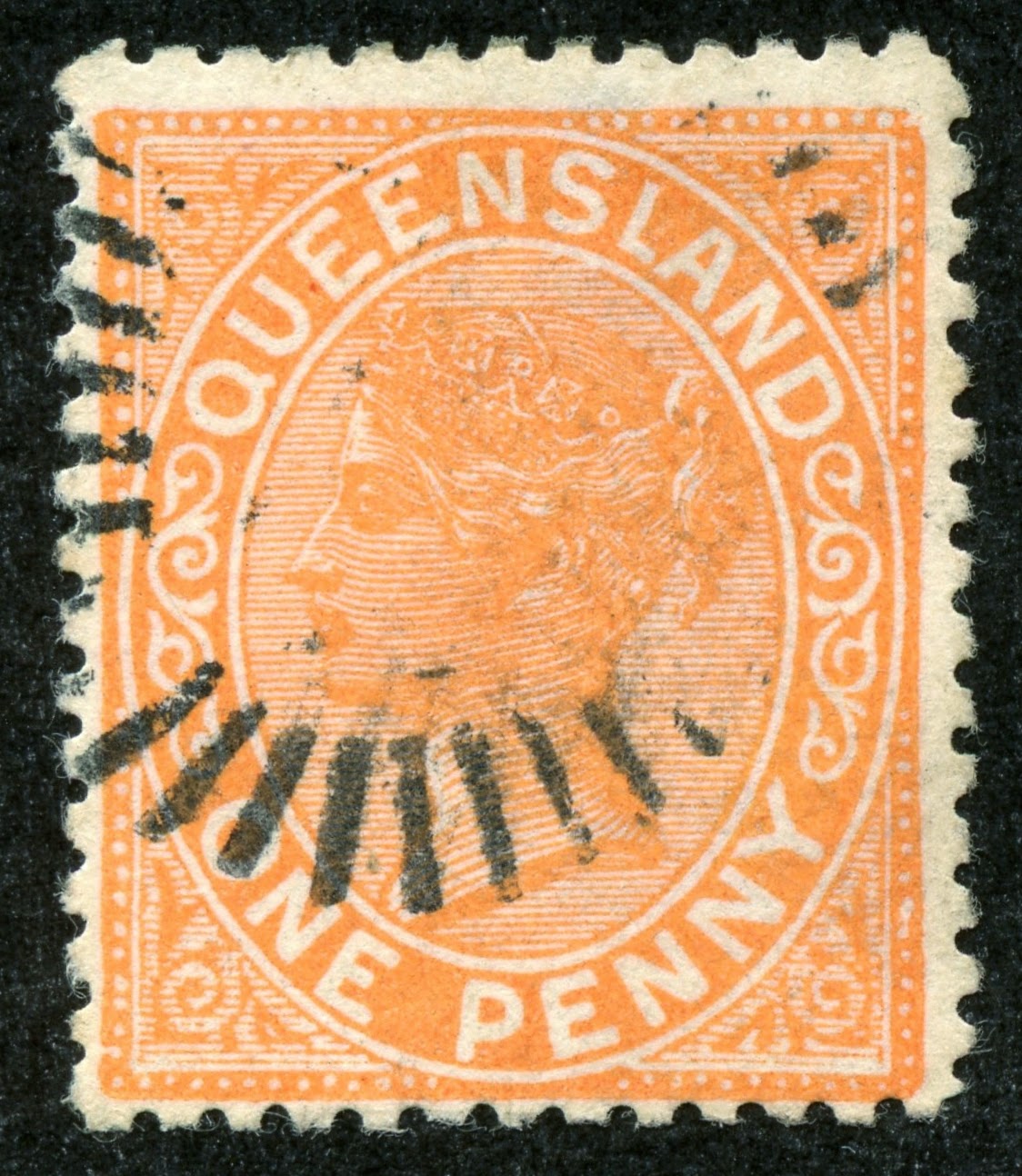 The 1890-92 issue of eight stamps includes four stamps that are redrawn from previous designs.

The redrawn versions do not have neck shading lines that go through to the front of the neck, and the "one penny" denomination (shown here) does not have a period after the "one penny" value. 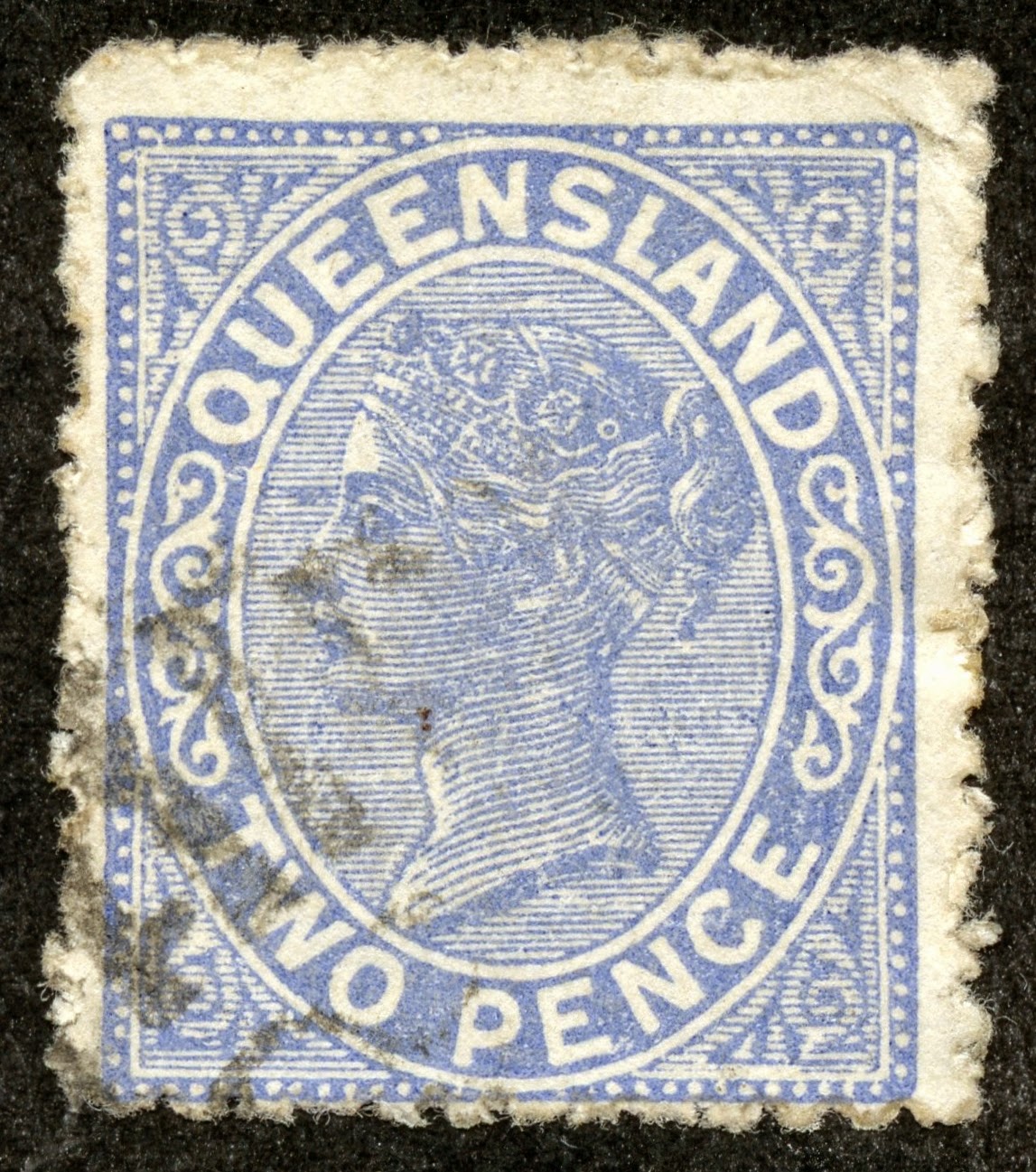 1890 Scott 91 2p gray blue
Redrawn
The redrawn two pence value clearly shows the lack of shading lines on the front of the neck. 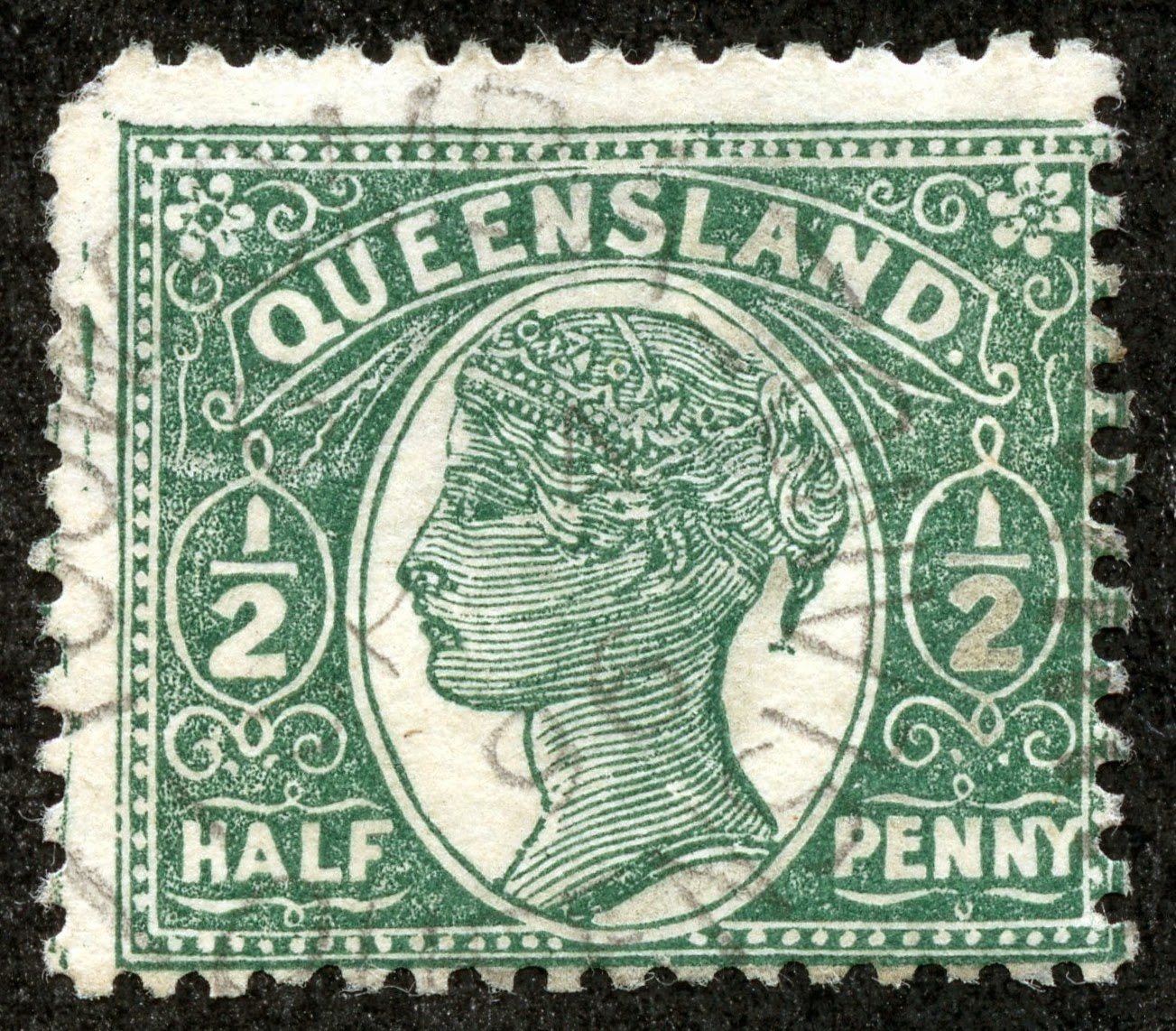 Are you familiar with the witticism coined by Ernest Rutherford?

"All science is either physics or stamp collecting"

He was referring to the desultory accumulation and passive characterization of "collections", in his view, found in botany and other sciences. The remark, as said, did nothing to win friends for physics among other science practitioners.

But considering the complications of stamp collecting as exhibited here, perhaps we should reevaluate? ;-) 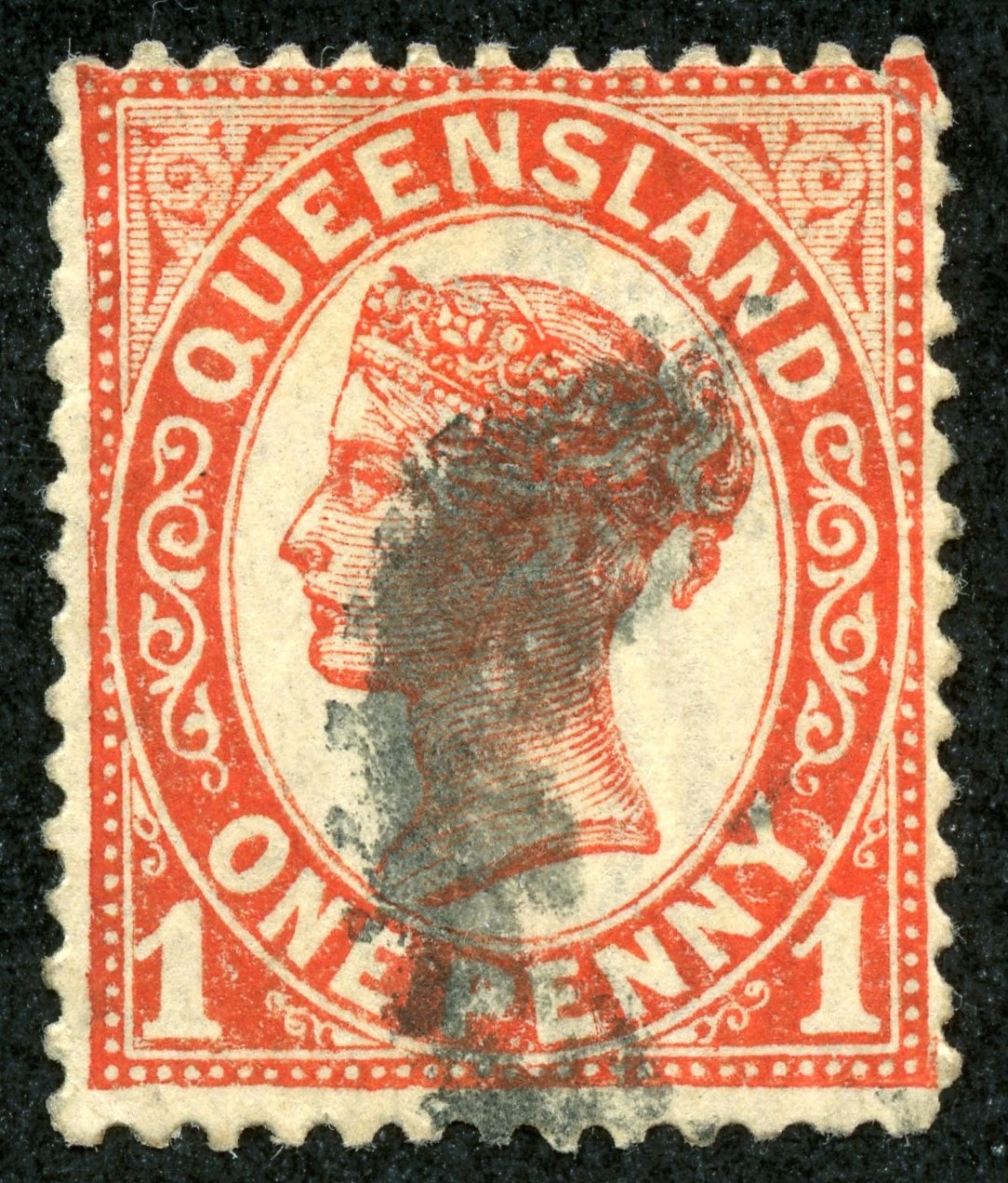 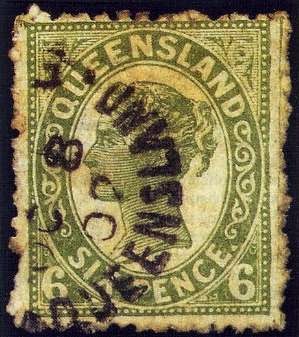 Scott 111A 6p yellow green
Here is a scan from the internet-(See "Out of the Blue" section for specific source) of the 6p yellow green. Check your collections! ;-) 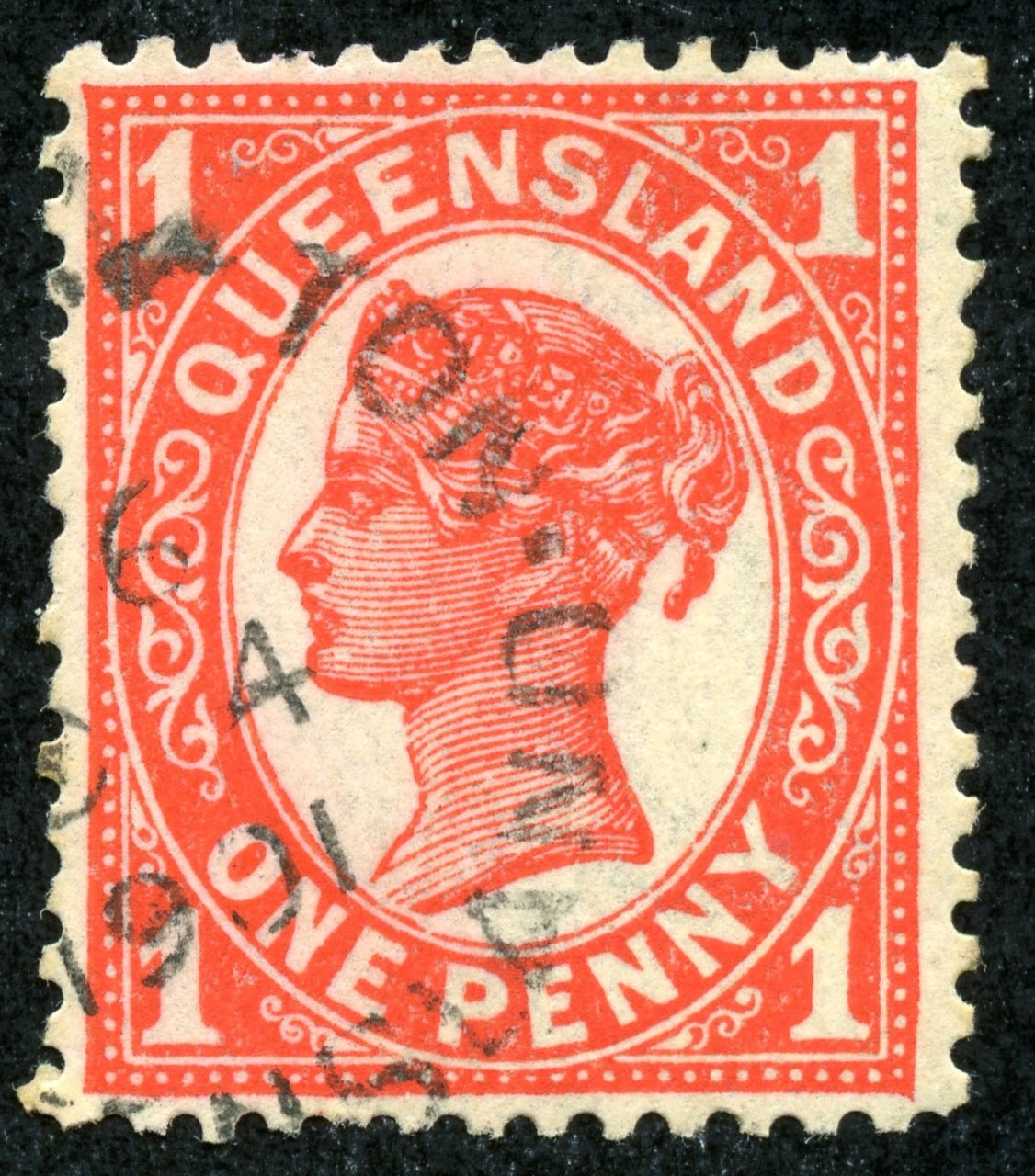 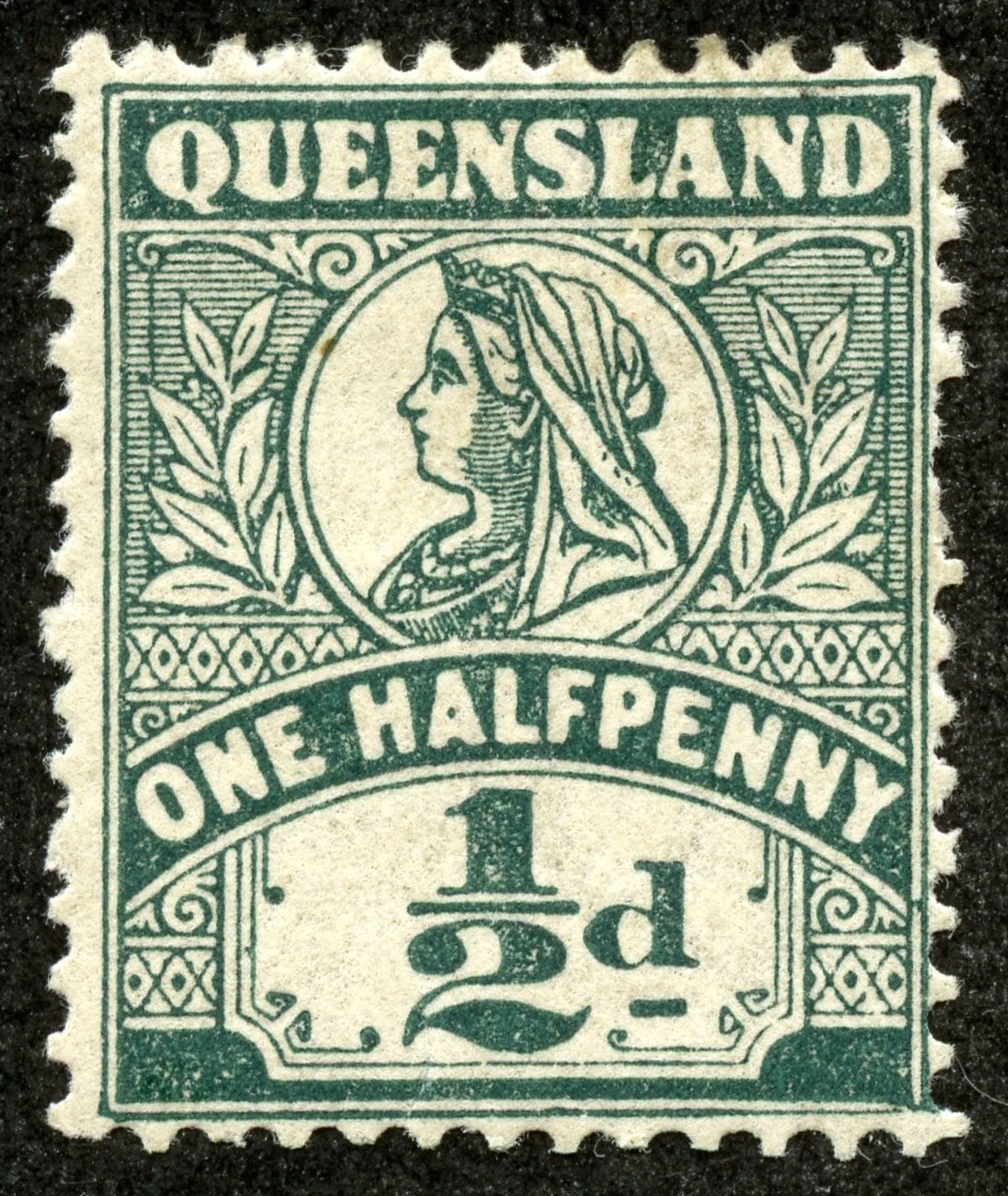 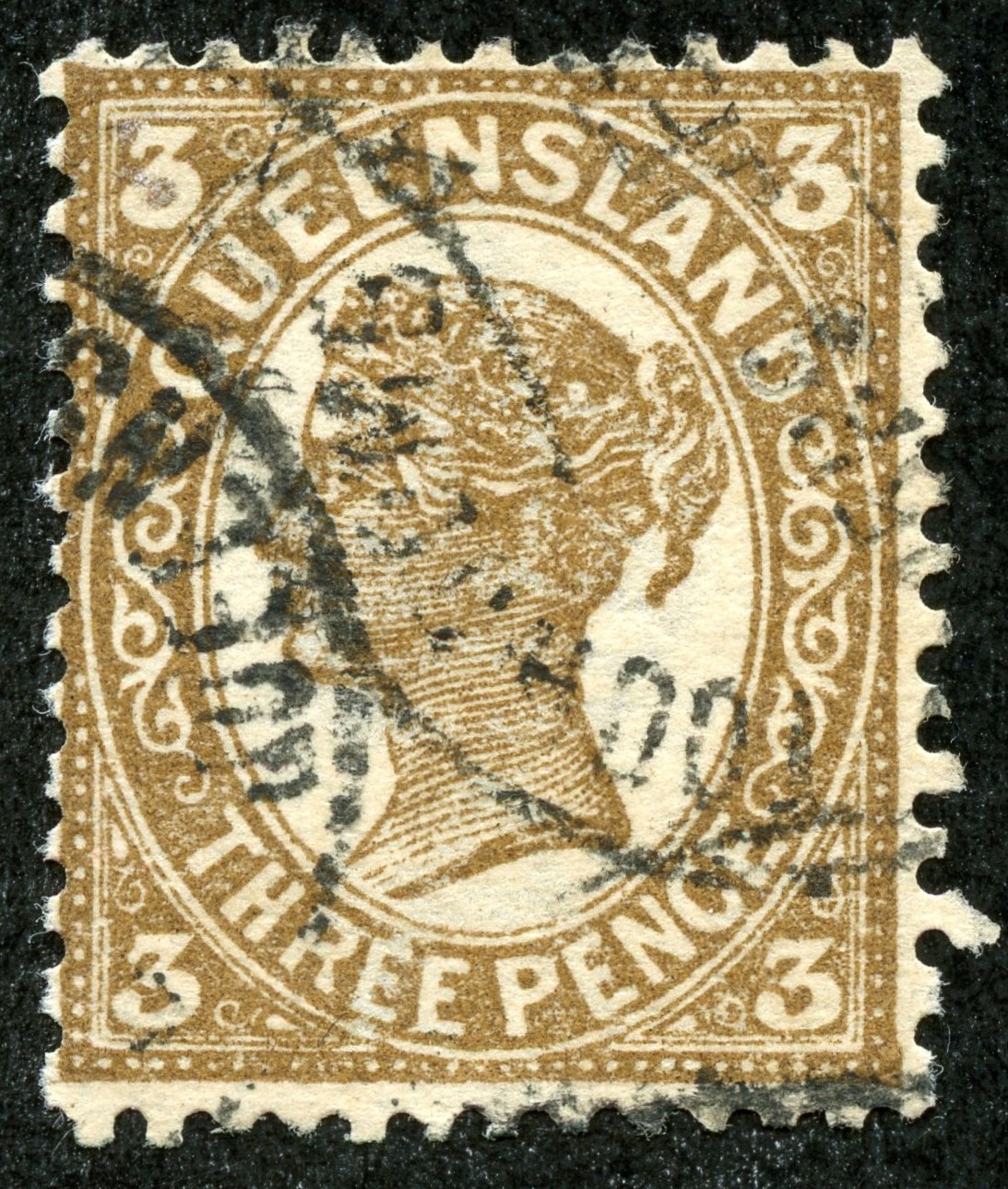 1895 Wmk "Crown & Q" issue in Deep Blue
Deep Blue (Steiner) has 10 pages for Queensland, and includes a space for all the major Scott numbers. That should be O.K. for general WW collectors. But if one has a particular interest in Queensland, then the Stanley Gibbons should be used, as there is much more information in it. The 1840-1970 Commonwealth & British Empire Stamps catalogue covers all the classical era British colonial countries- highly recommended. 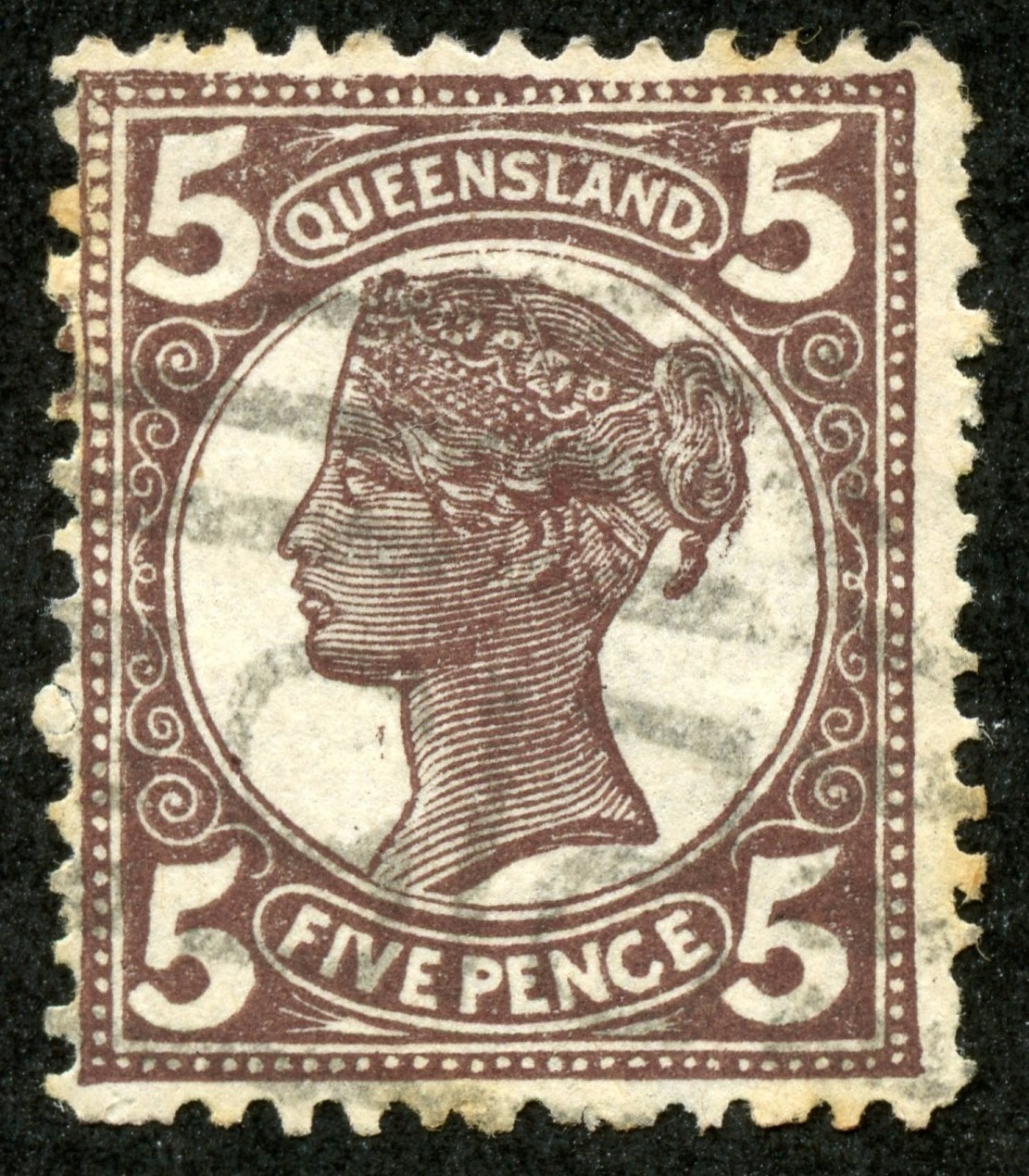 1897-1900 Scott 119 5p brown violet
Big Blue
Big Blue '69, on one page between Portuguese India and Quelimane, has 34 spaces. Coverage is 20.7%. But, considering the expensive nature of some Queensland stamps, and the fact that there are multiple stamp choices for many spaces, the coverage, although not generous, is O.K.

There are three expensive stamps, but none cross over into the "Most Expensive ($35)" category.

One will find multiple choices for a number of stamp spaces. I elaborate in the "comments" section after the checklist. 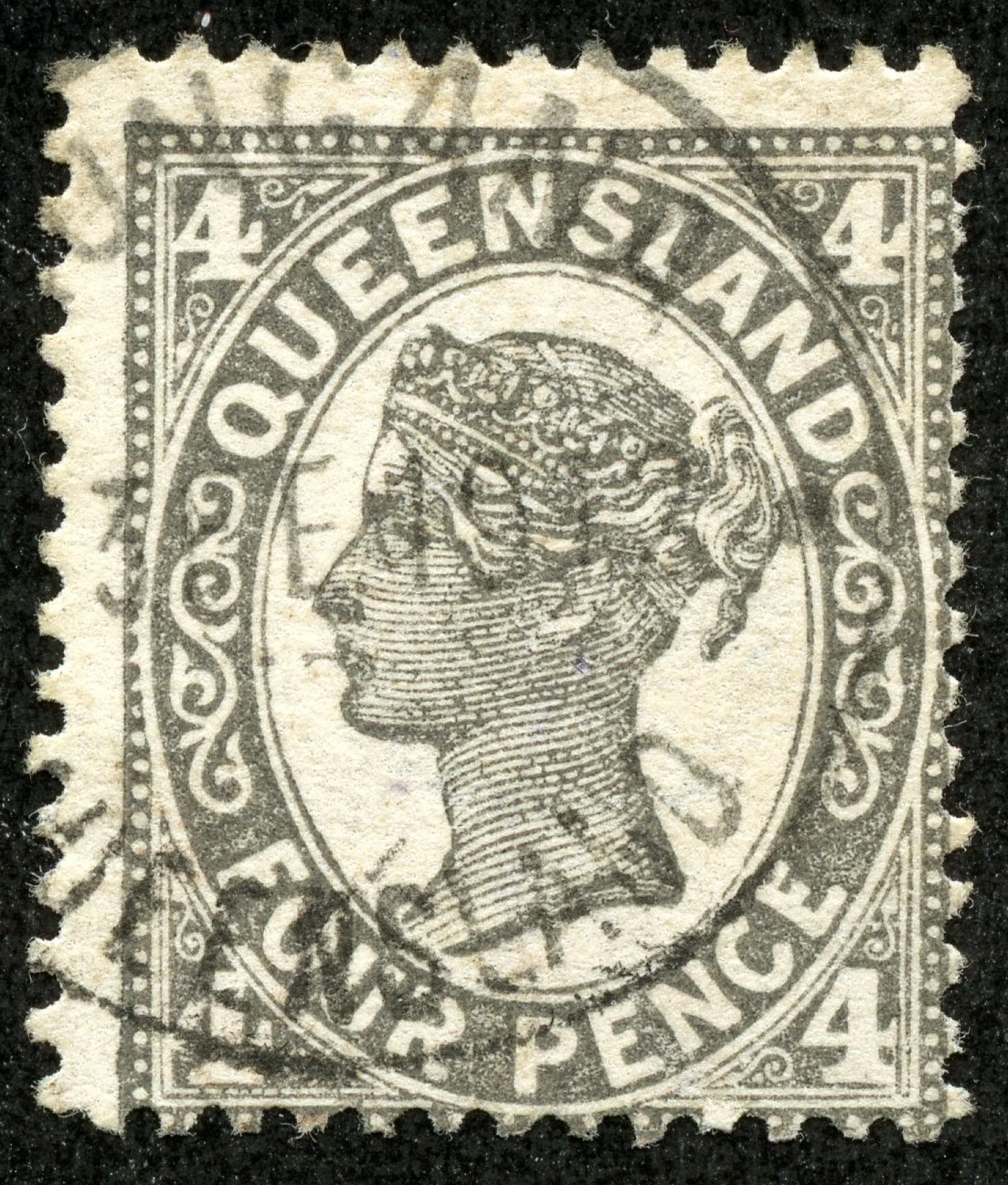 1909 Scott 136 4p gray black
Out of the Blue
At one time back in the 1980s, I thought of semi-specializing in the Australian colonies. The thought reoccurs from time to time. ;-)

Note: Scott 111A 6p yellow green scan is by permission of Rod Allan, and is from his submission on The Stamp Forum, but the scan originally appeared in Australian Stamp News June/July 2002. The map appears to be in the public domain.