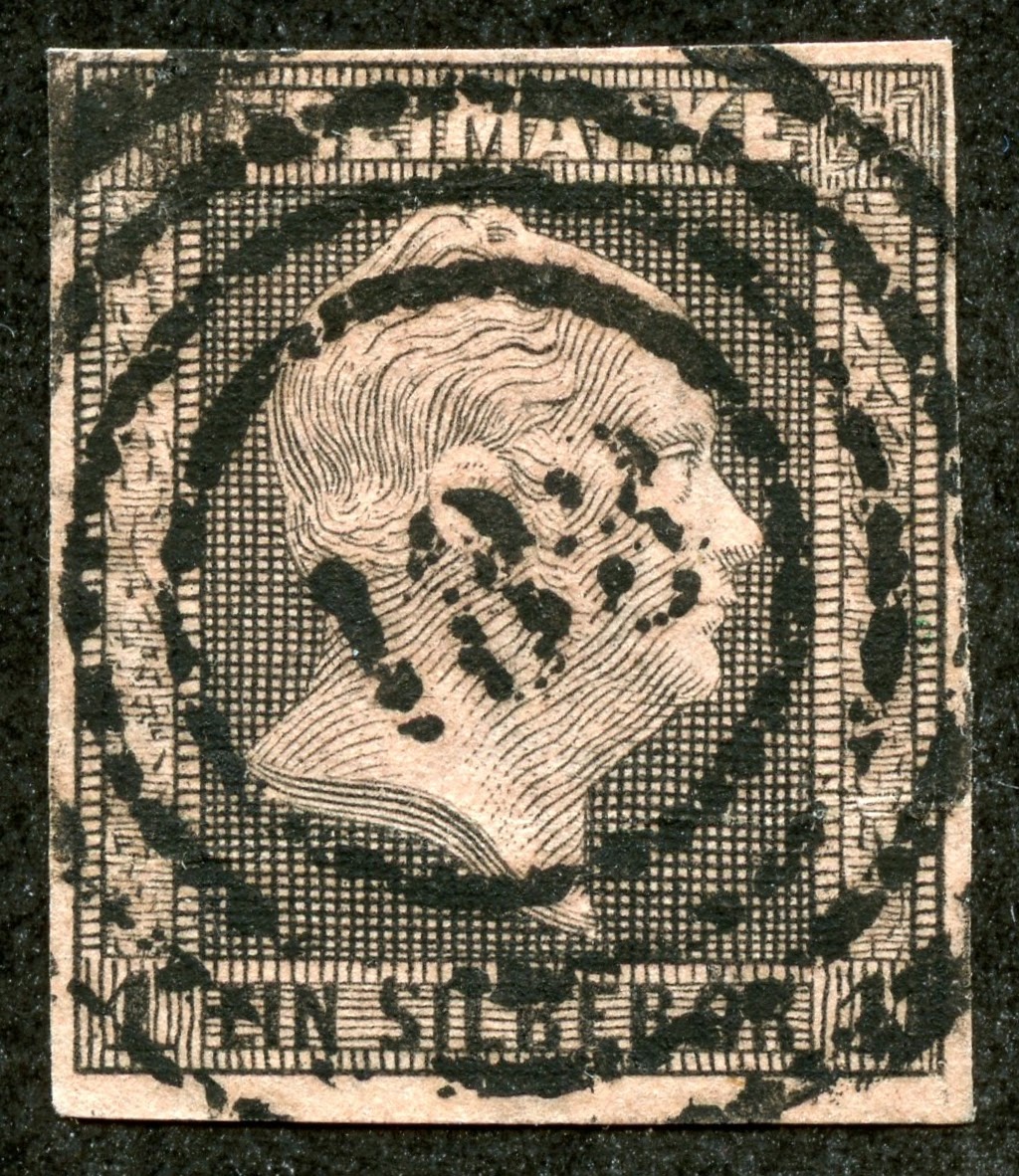 1850 Scott 3 1sg black/rose
"King Frederick William IV"
Quick History
Prussia was, by far, the leading German Kingdom, and in 1871 the German Empire was created under it's domination.

The population was 24.7 million in 1871 (60% of the German Empire's total population), and the capital was Berlin. 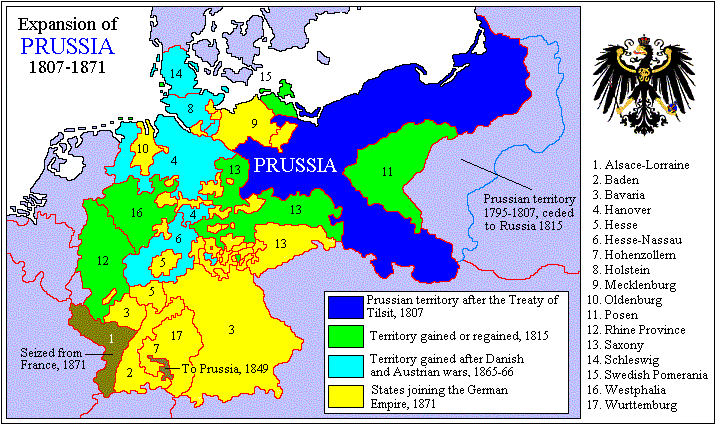 Expansion of Prussia 1807-1871
But before Prussia was part of the North German Confederation and the German Empire, it was a separate Kingdom that issued stamps between 1850-1867.

The stamps of 1861-67 Prussia show the Prussian Coat of Arms. 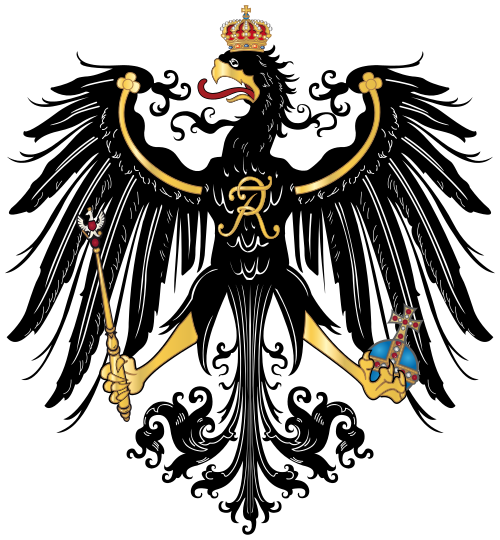 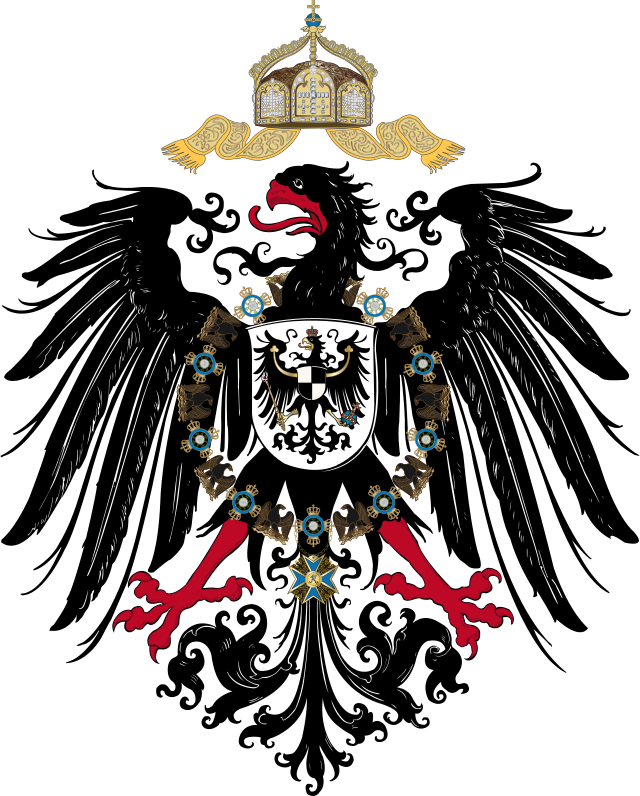 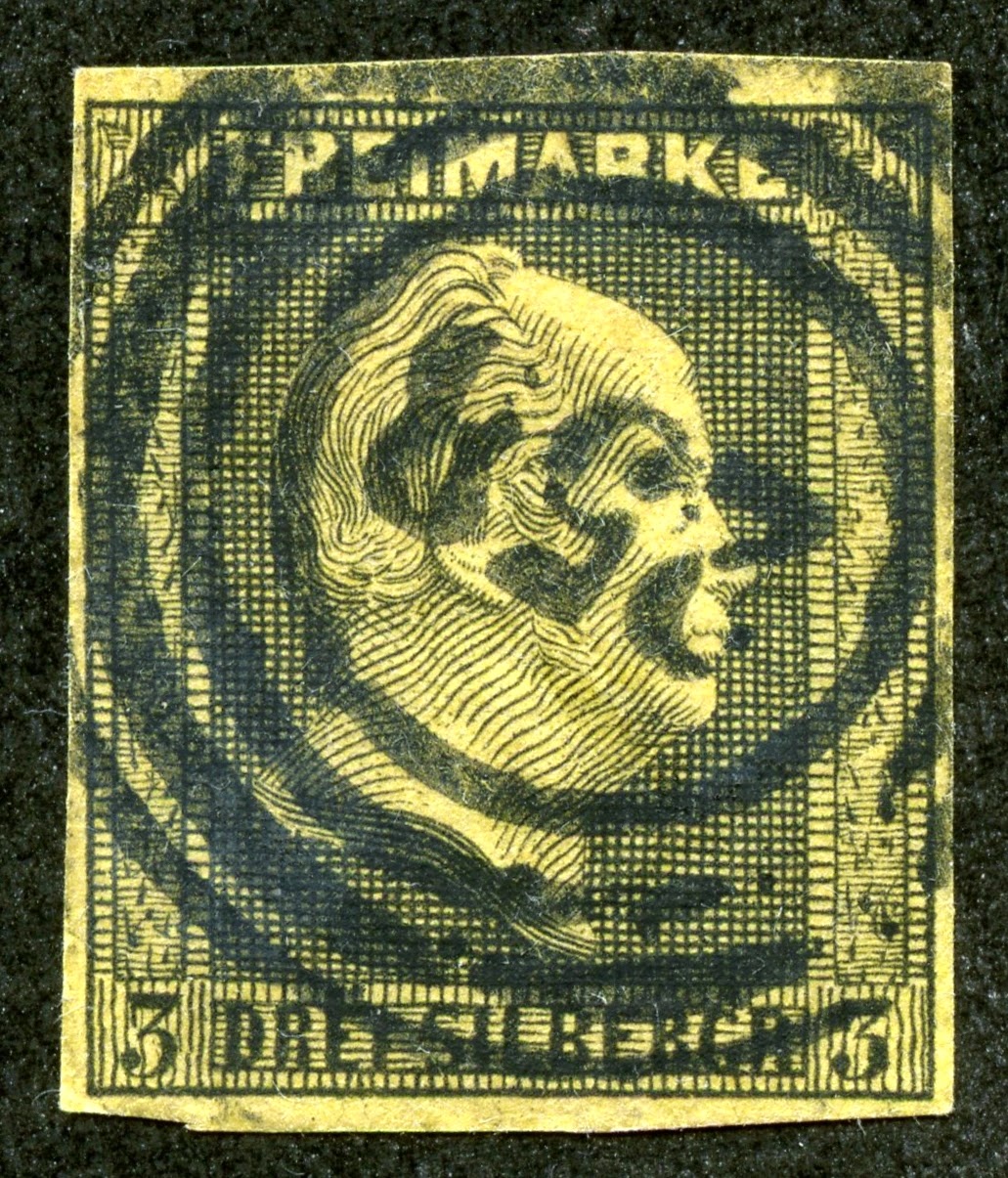 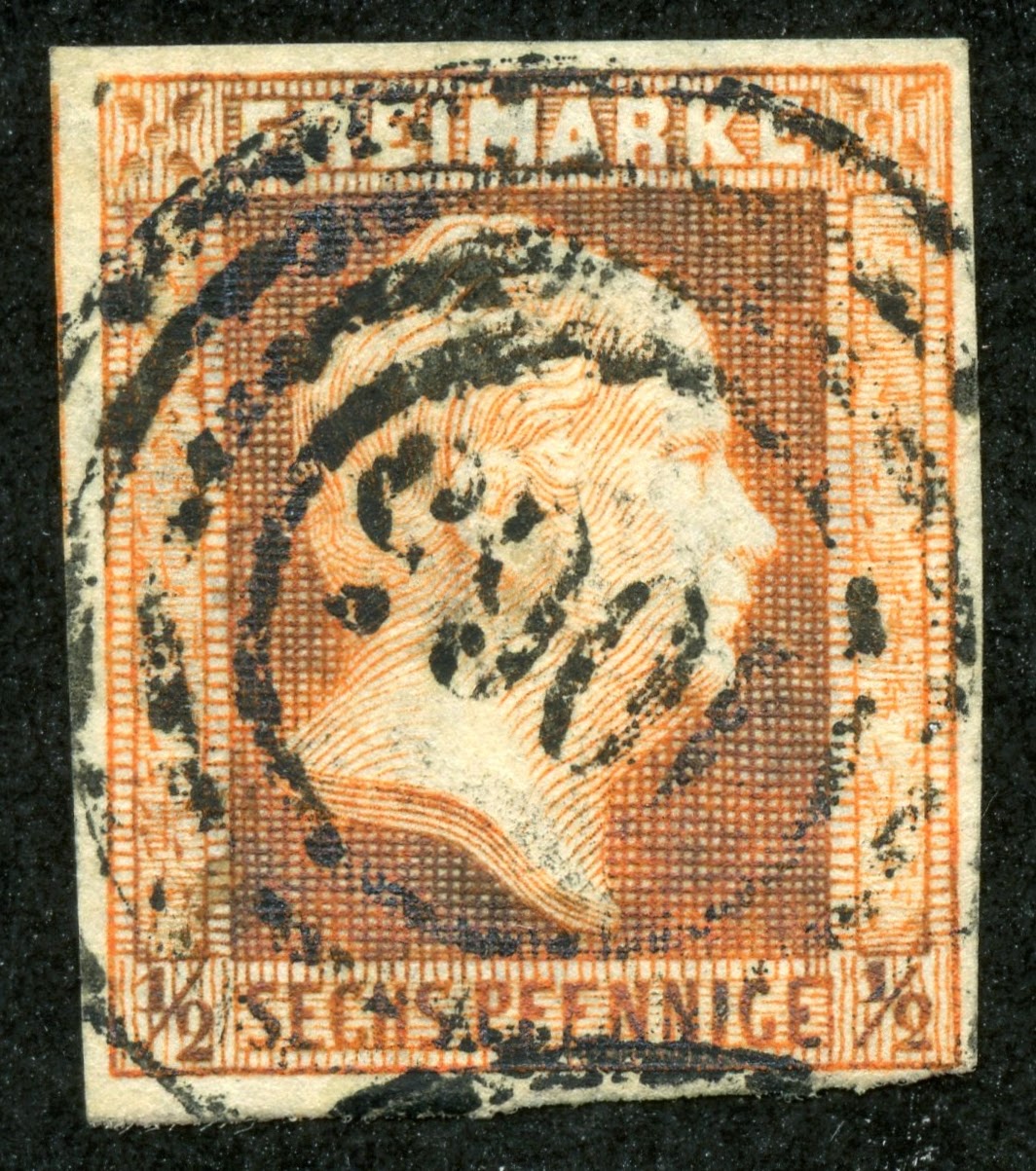 1850 Scott 2 6pf ( 1/2sg) red orange
"King Frederick William IV"
Background of Crossed Lines
The 1850-56 engraved imperforate set of five stamps shows the reigning monarch, and has a background of crossed lines. Three of the stamps have a CV of $8-$10+ -relatively modest, no doubt because Prussia was populous, and stamp use was comparatively high. 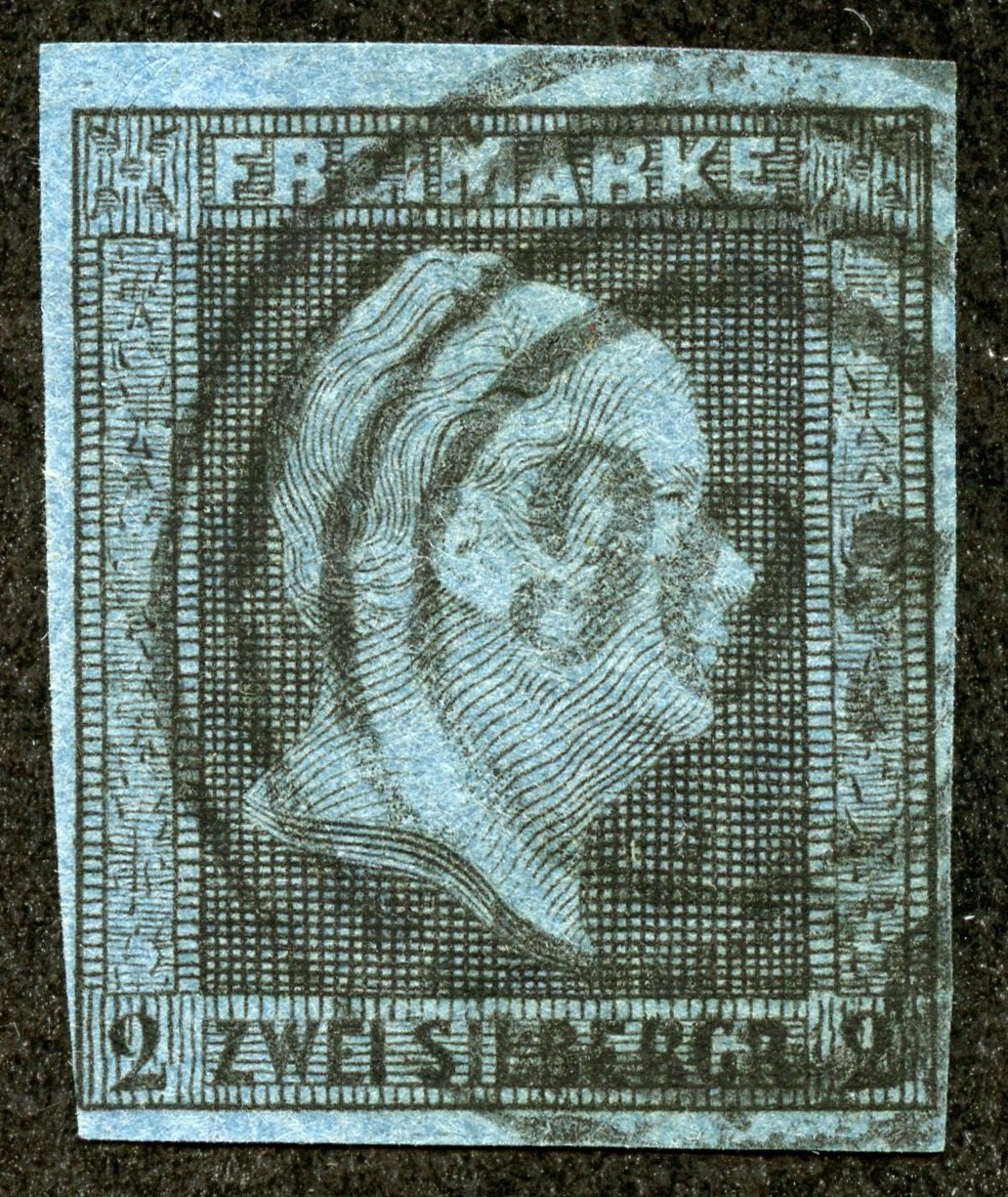 1850 Scott 4 2sg black/blue
The postmarks during this era often consist of an identifying town number surrounded by four concentric circles (Vierringstempel). The 1sg, 2sg, and 3sg denomination stamps are on rose, blue, and yellow paper respectively. 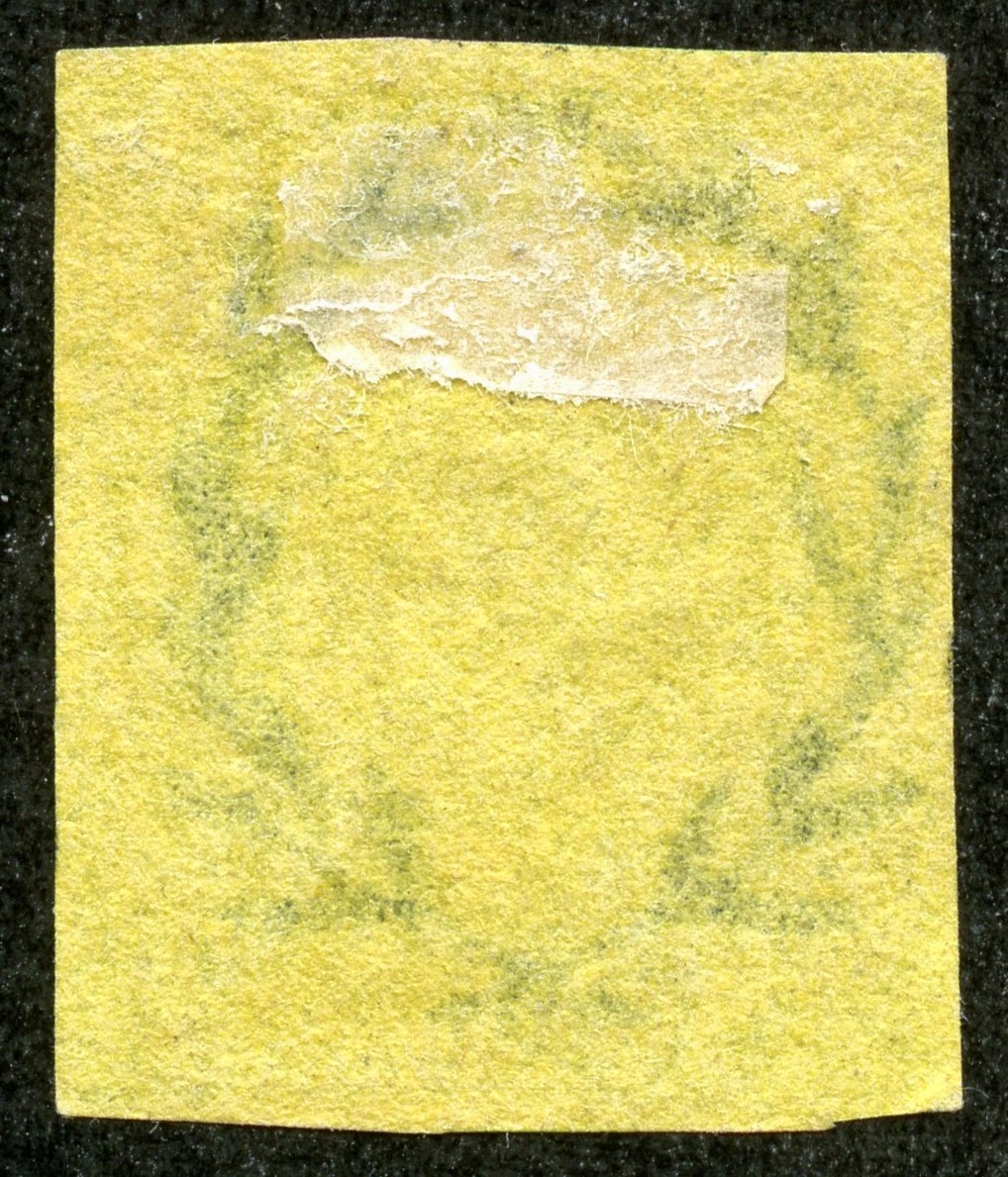 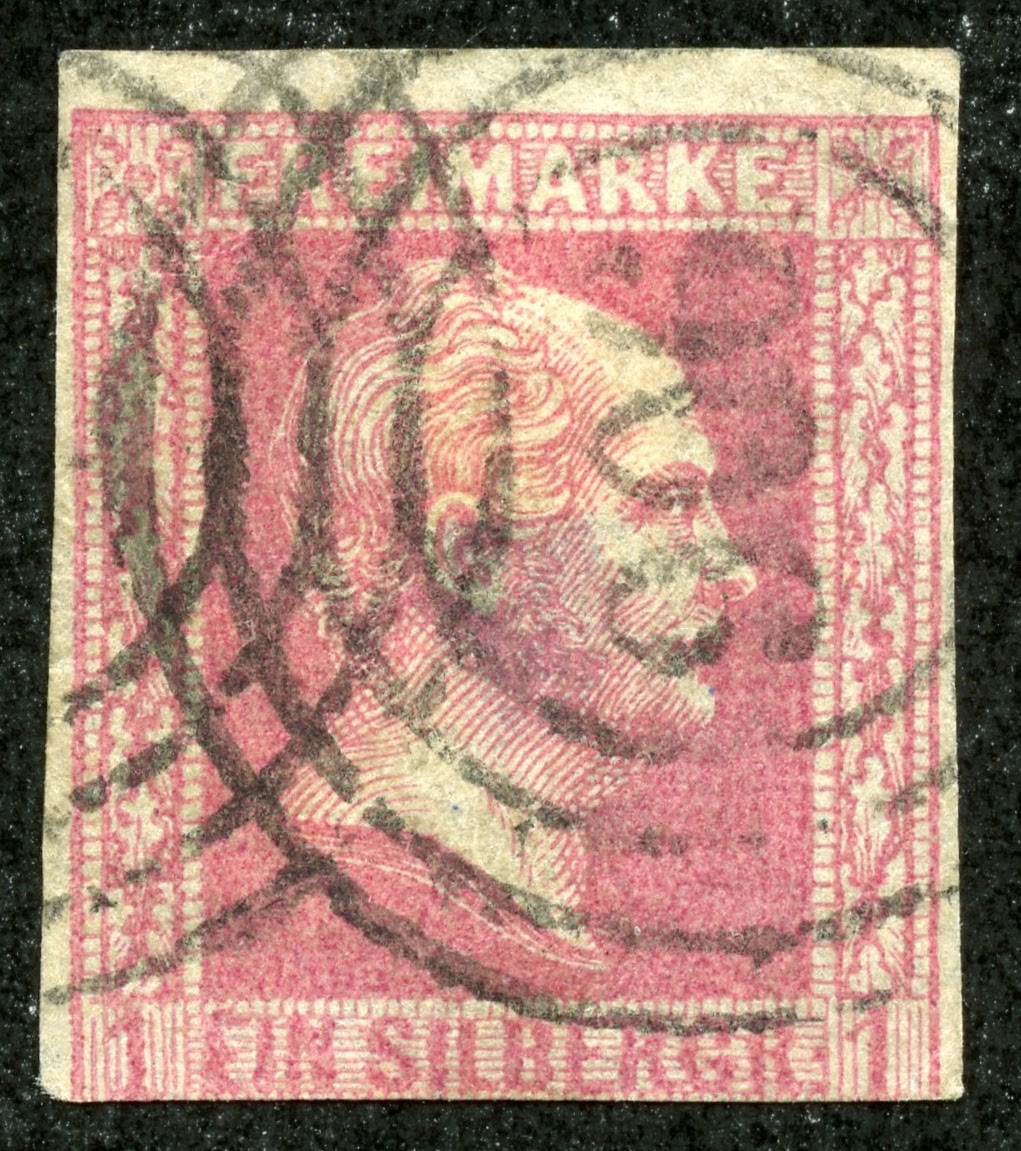 1857 Scott 6 1sg rose
Solid Background
A three stamp typographed issue was released in 1857. These stamps have a solid background. 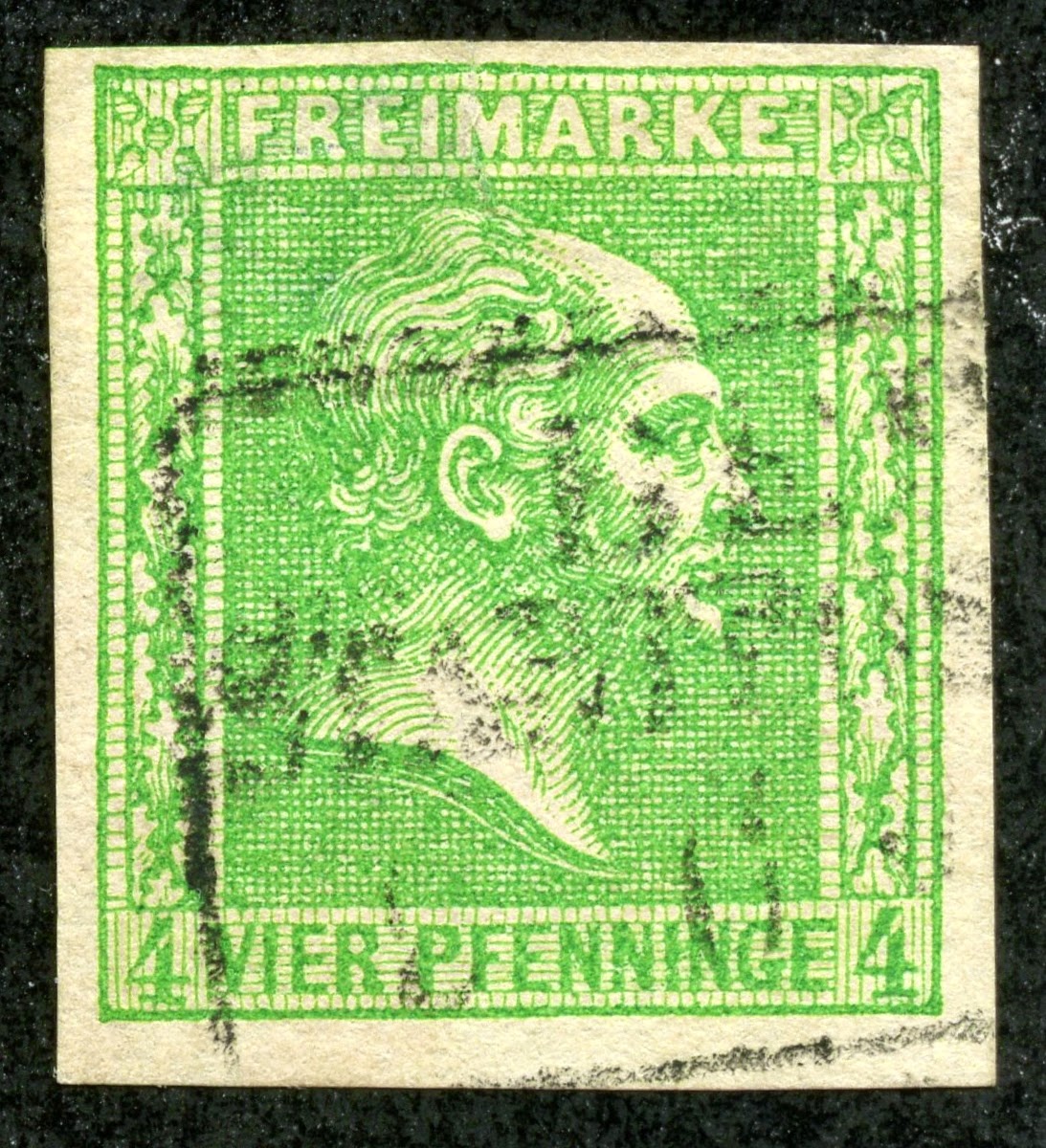 1858 Scott 9 4pf green
Background of Crossed Lines
A typographed 4pf green with a background of crossed lines was issued in 1858. This is a stamp where a forgery exists, according to the German Philatelic Society Forgery Manual for the German States. The forgery is cruder with no arched shading lines on the forehead, and the "Freimarke" script only 1.25 mm high rather than 1.5 mm high. 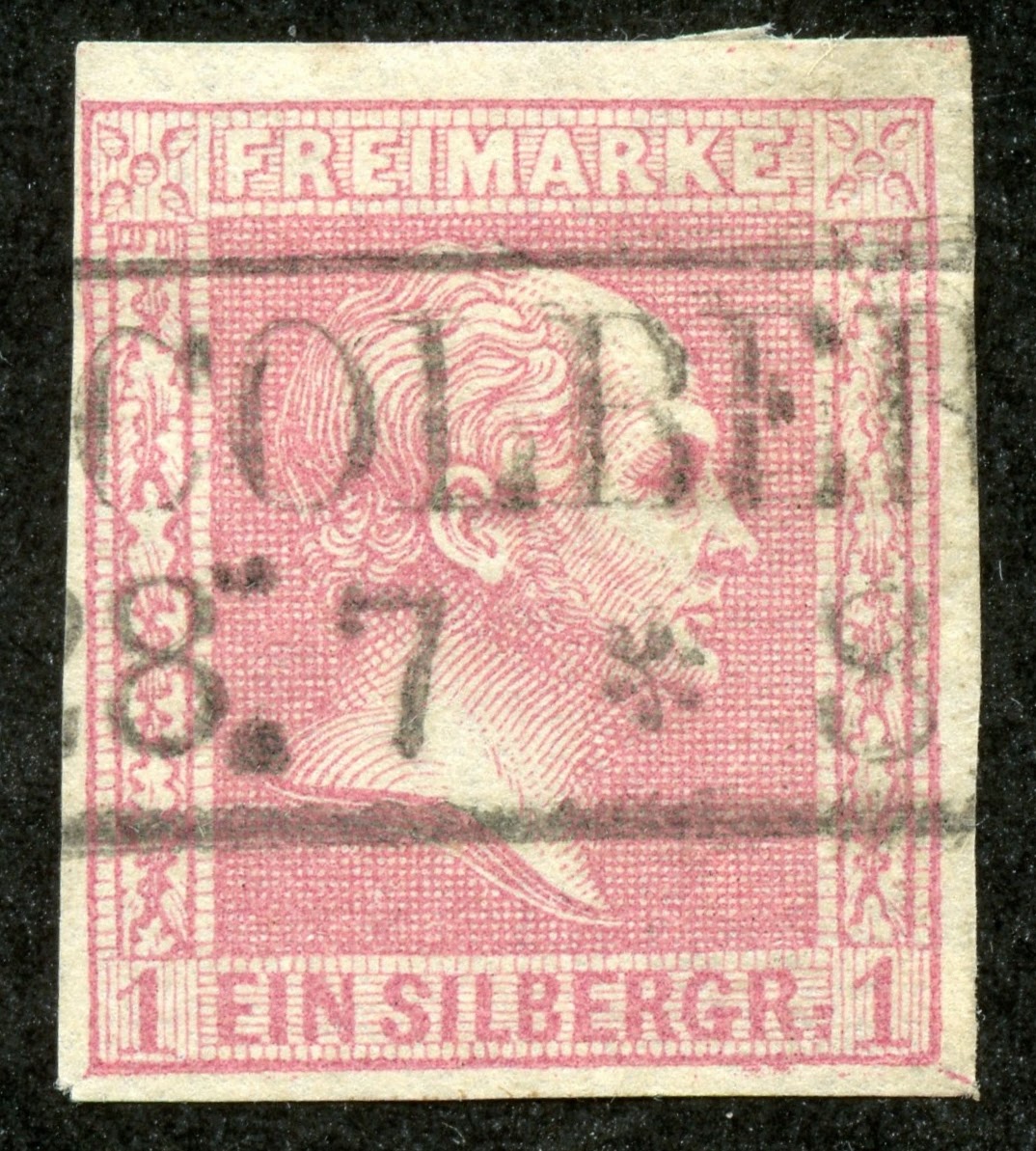 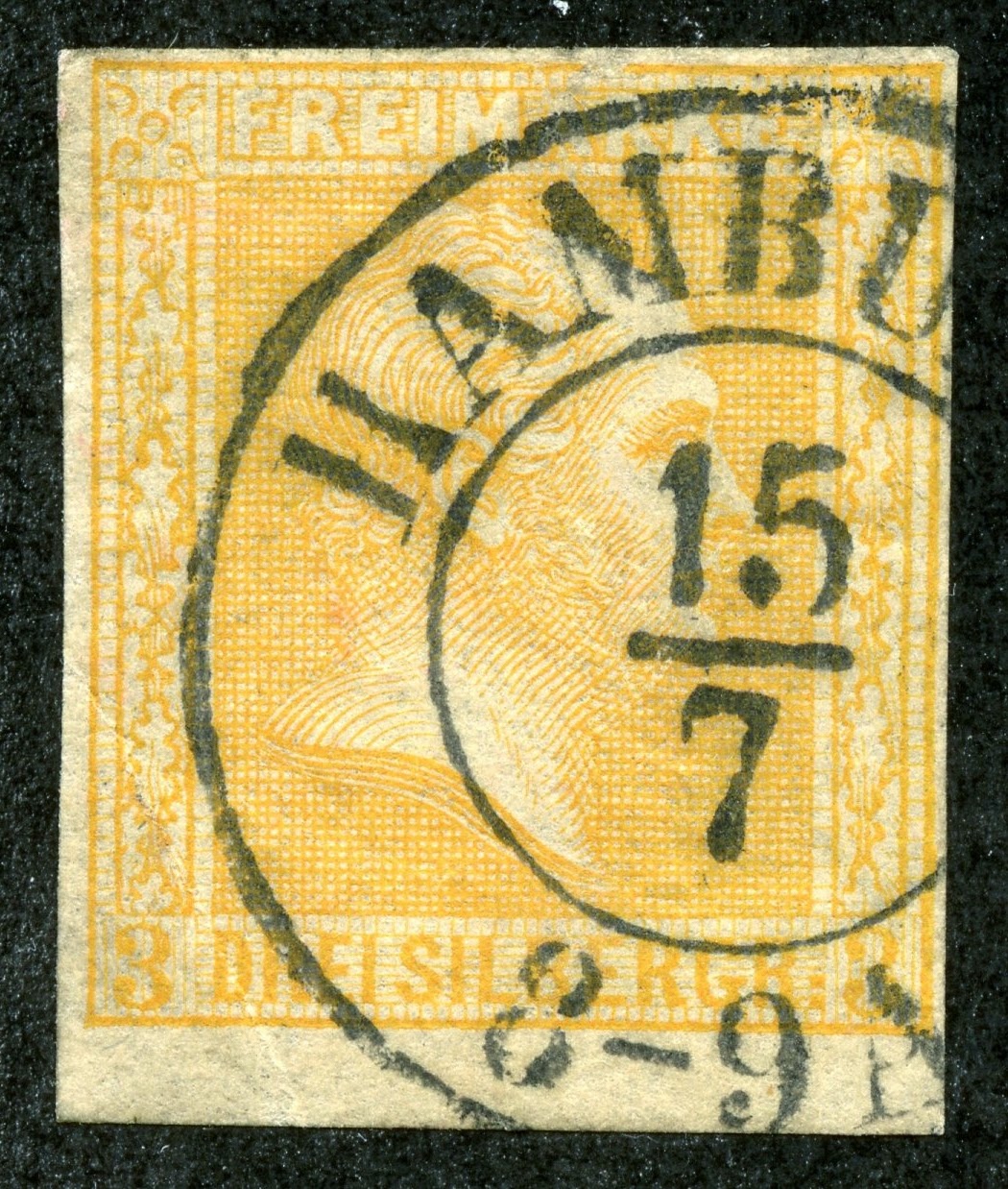 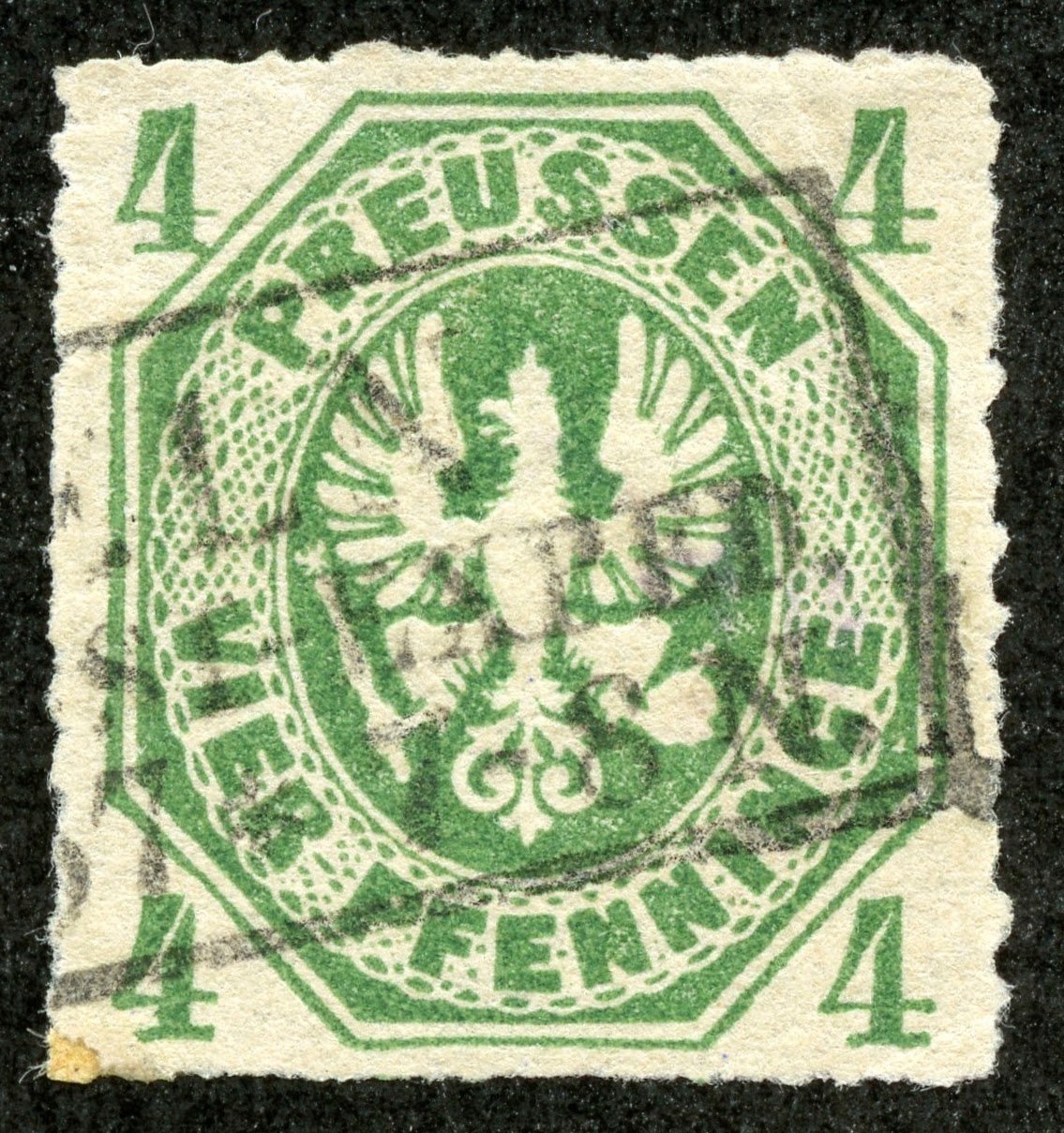 1861 Scott 15 4pf yellow green
Embossed, Rouletted 11 1/2
"Coat of Arms"
The Prussian "Coat of Arms" was used for the six stamp 1861-67 set. The new monarch, William I, for some reason, was not chosen for the visage. The subtle hand of Chancellor Otto von Bismarck, as he attempts to unify Germany? 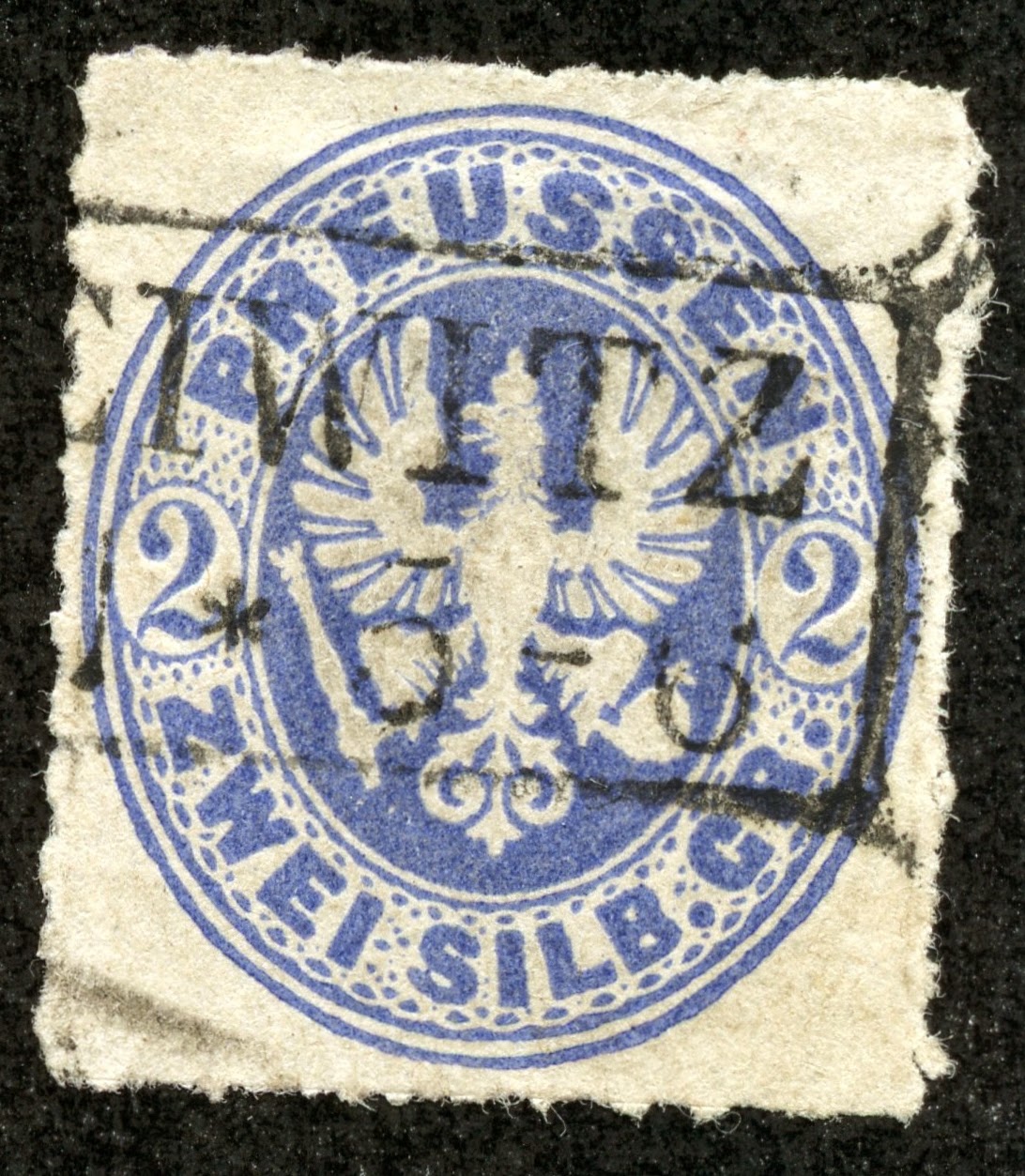 There is, in addition, a similar five stamp 1867 set (not shown), which is valued in  Kreuzer denominations.

The stamps of Prussia were superseded on January 1, 1868 by those of the North German Confederation. 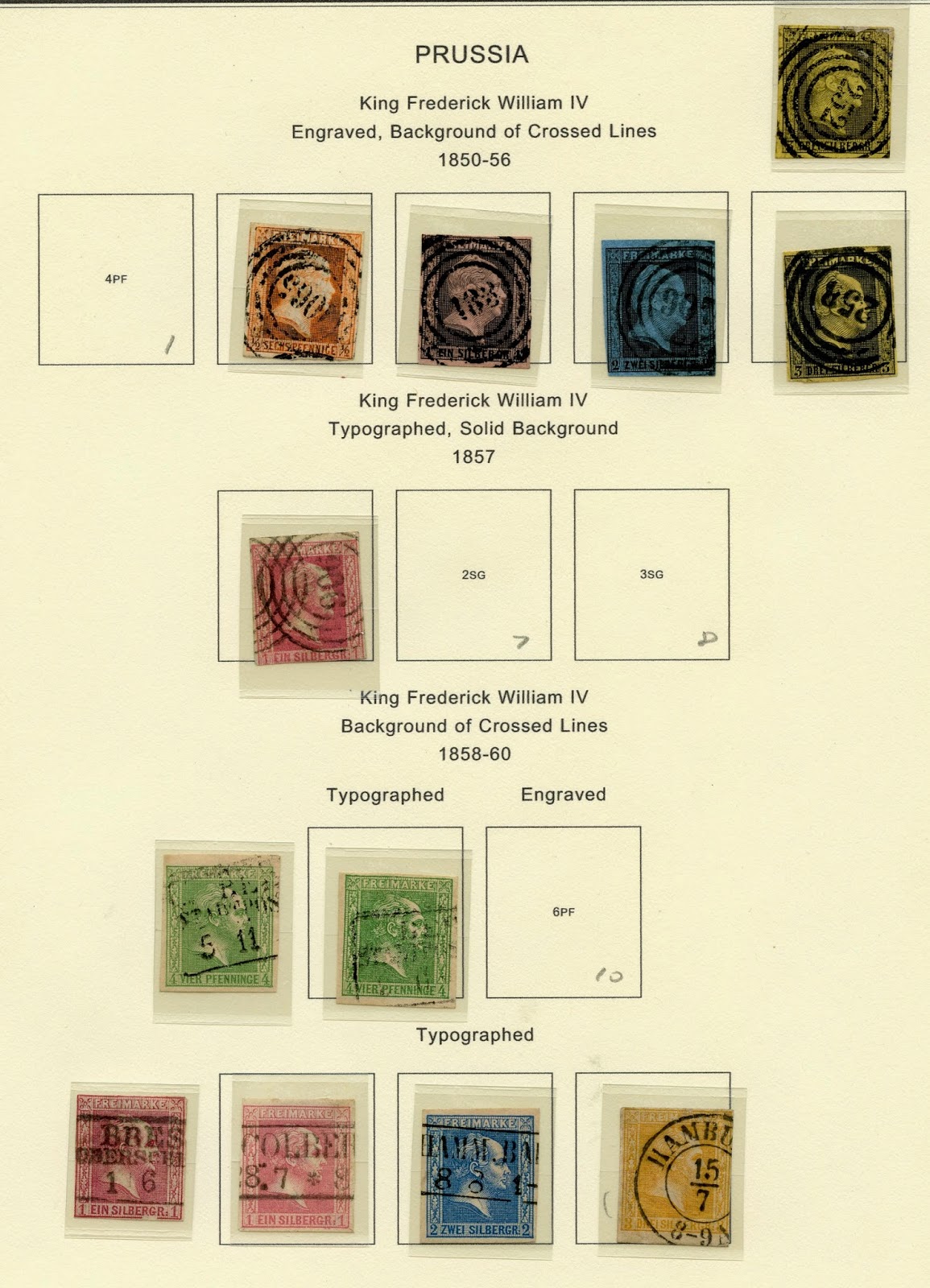 Prussia 1850-1860 Issues in Deep Blue
Deep Blue (Steiner) has two pages for the stamps of Prussia, and gives a space for all Scott major numbers. A quadrilled page might also be nice for minor number variations or extras. 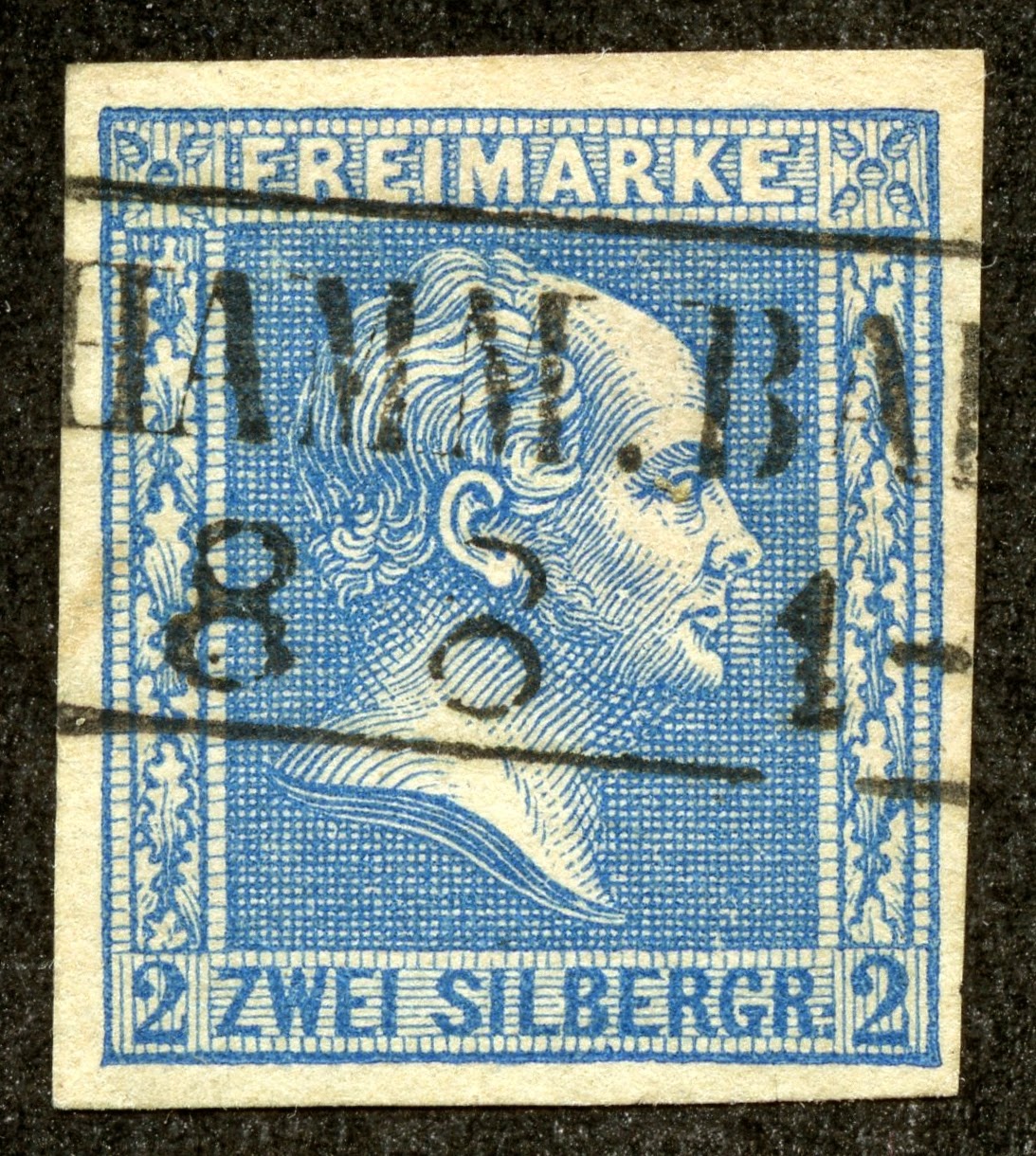 The other line in the '69 BB has 7 spaces for the 1903 Local Official stamps for Prussia, but these stamps are listed under Germany in the catalogue.

The coverage for Prussia in the '69 is located on the same page as Nyassa and Obock, and before Oltre Giuba.

For the 40s BB editions, the coverage is found after the Paraguay - Pitcairn Islands page. 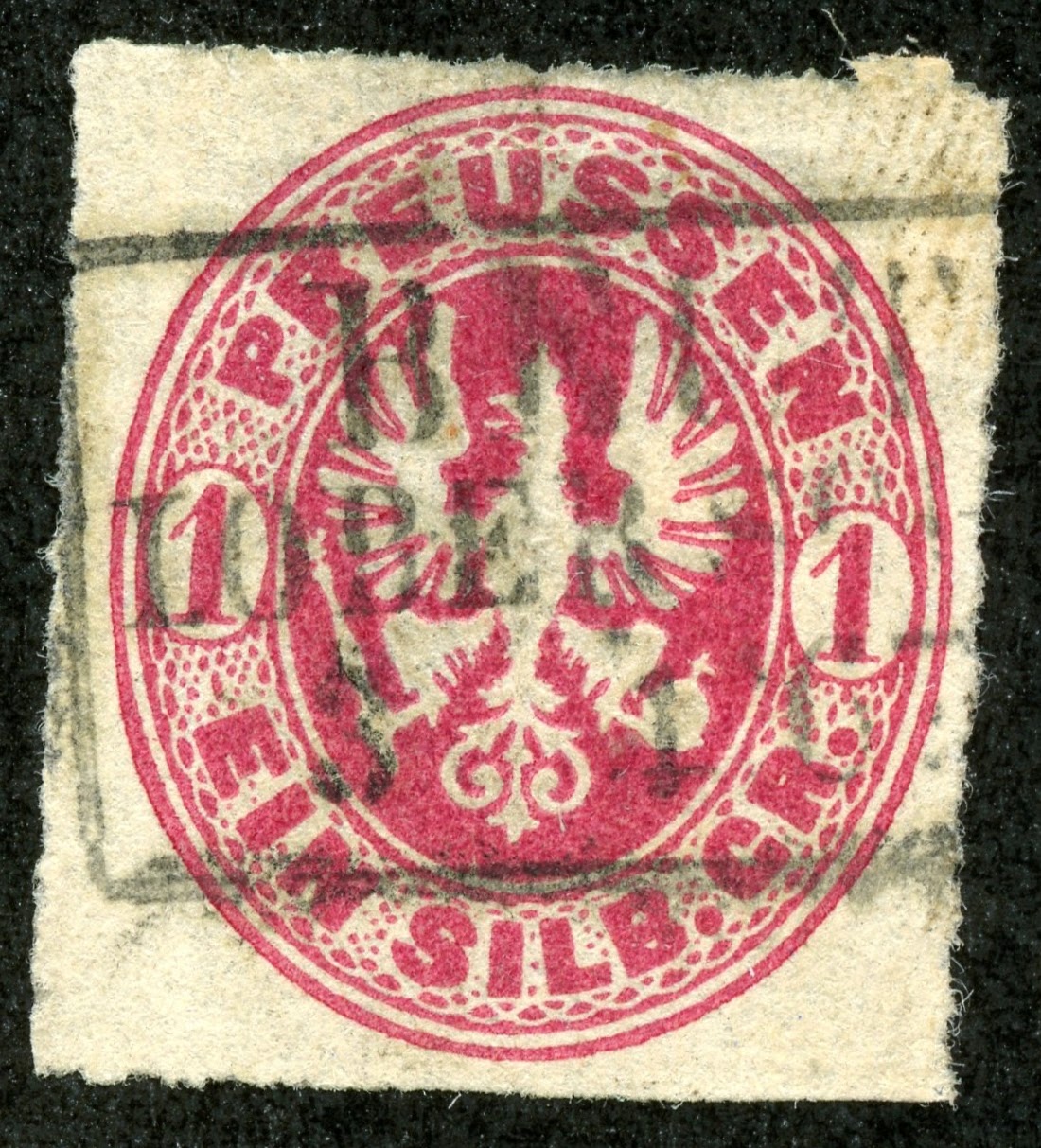 1861 Scott 17 1sg rose "Coat of Arms"
Out of the Blue
I would like to do a little more investigation of the stamps of Prussia- but, for the present, I have to move on. ;-)

Note: The maps and "Coat of Arms" images appear to be in the public domain.