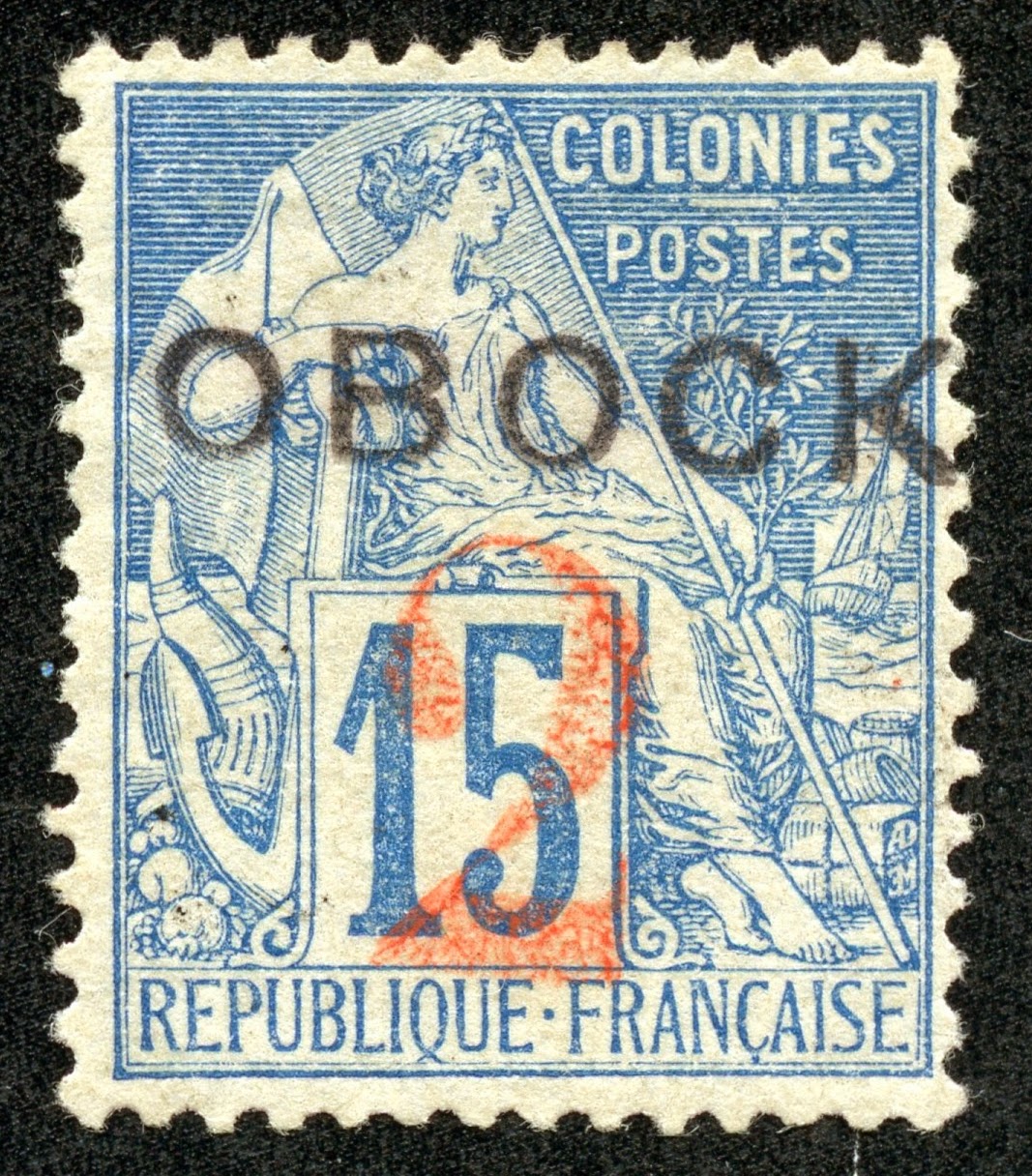 1892 Scott 23 2c on 15c blue
Stamps of French Colonies
Handstamped with additional Surcharge
Quick History
Obock was a French seaport on the Gulf of Aden in eastern Africa, and across from the British port of Aden. It was the first French settlement (colony) in the region through a treaty with the local Afar Sultans in 1862. These agreements were strengthened between 1883 and 1887. 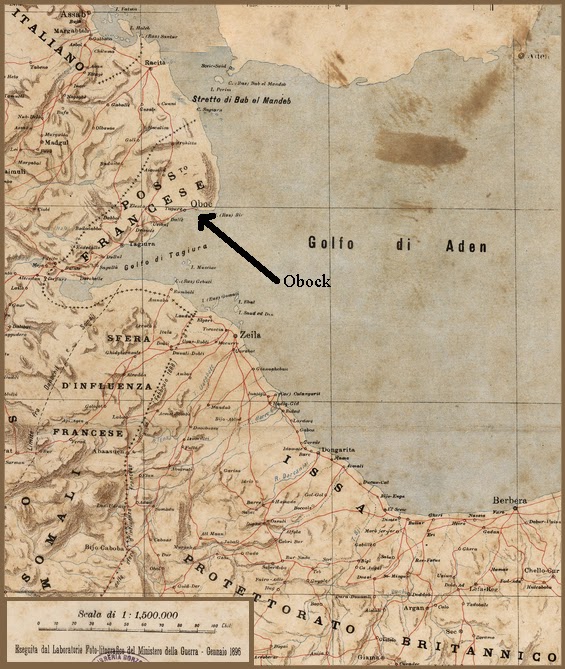 The reason for the settlement? The French wanted their own coaling station for steamships (the Suez Canal had opened in 1869), as they did not want to rely solely on the British Aden coaling station.

Stamps were issued beginning in 1892, and consisted of French Colonies stamps that were handstamped "Obock". Stamp issues continued until 1894. 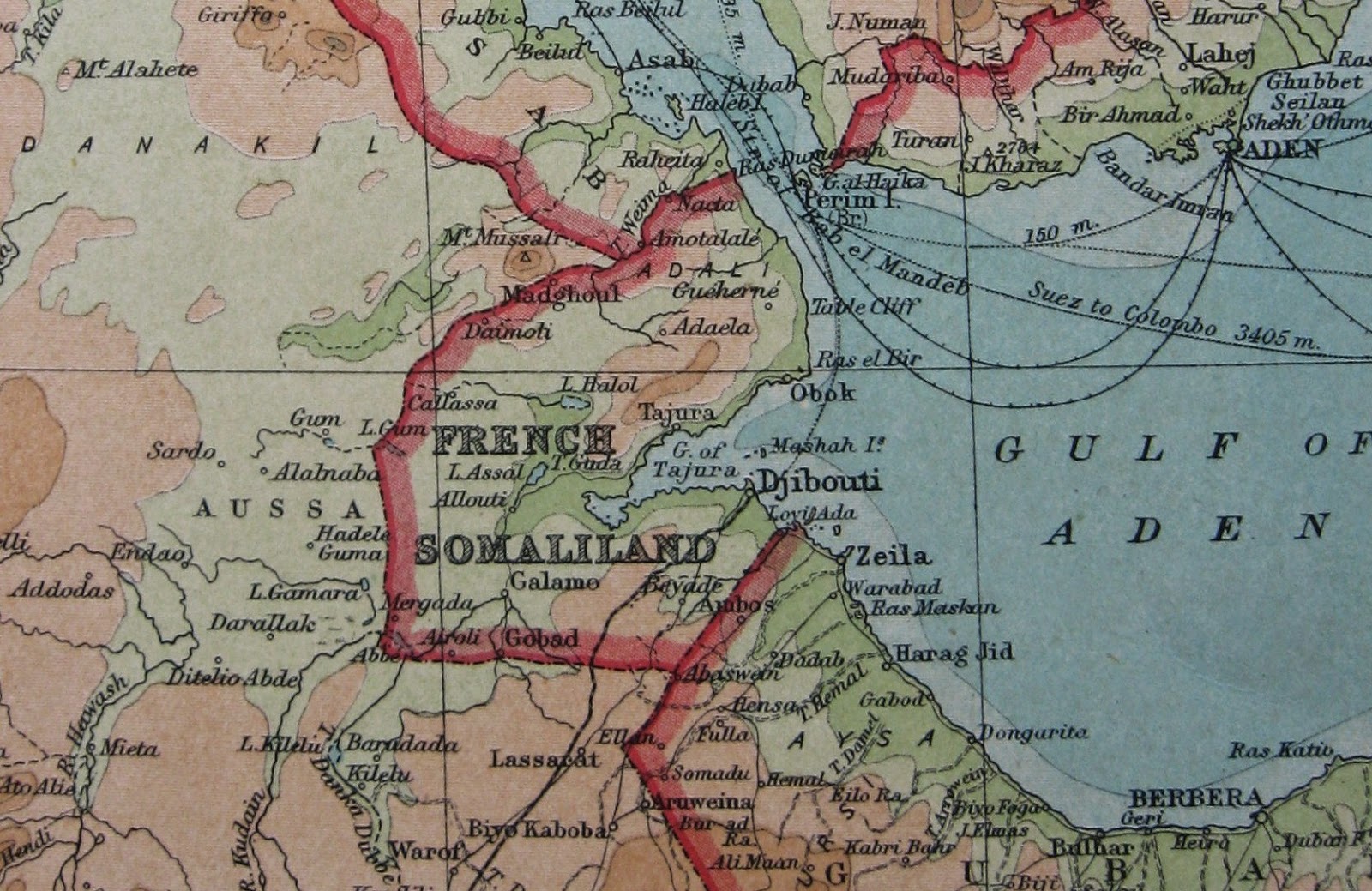 The population subsequently declined to about 500 in 1911. So ends the glory days of Obock. 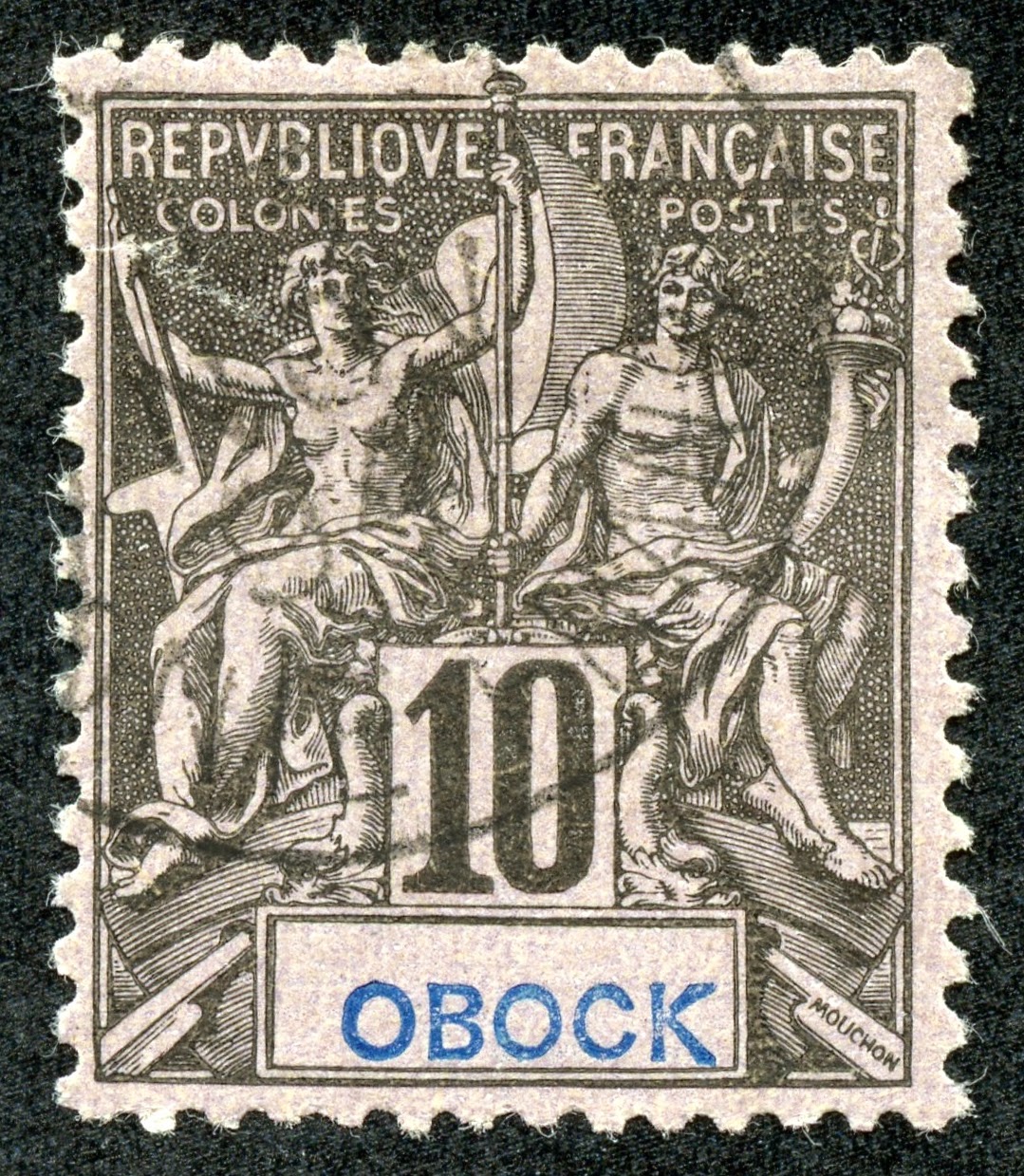 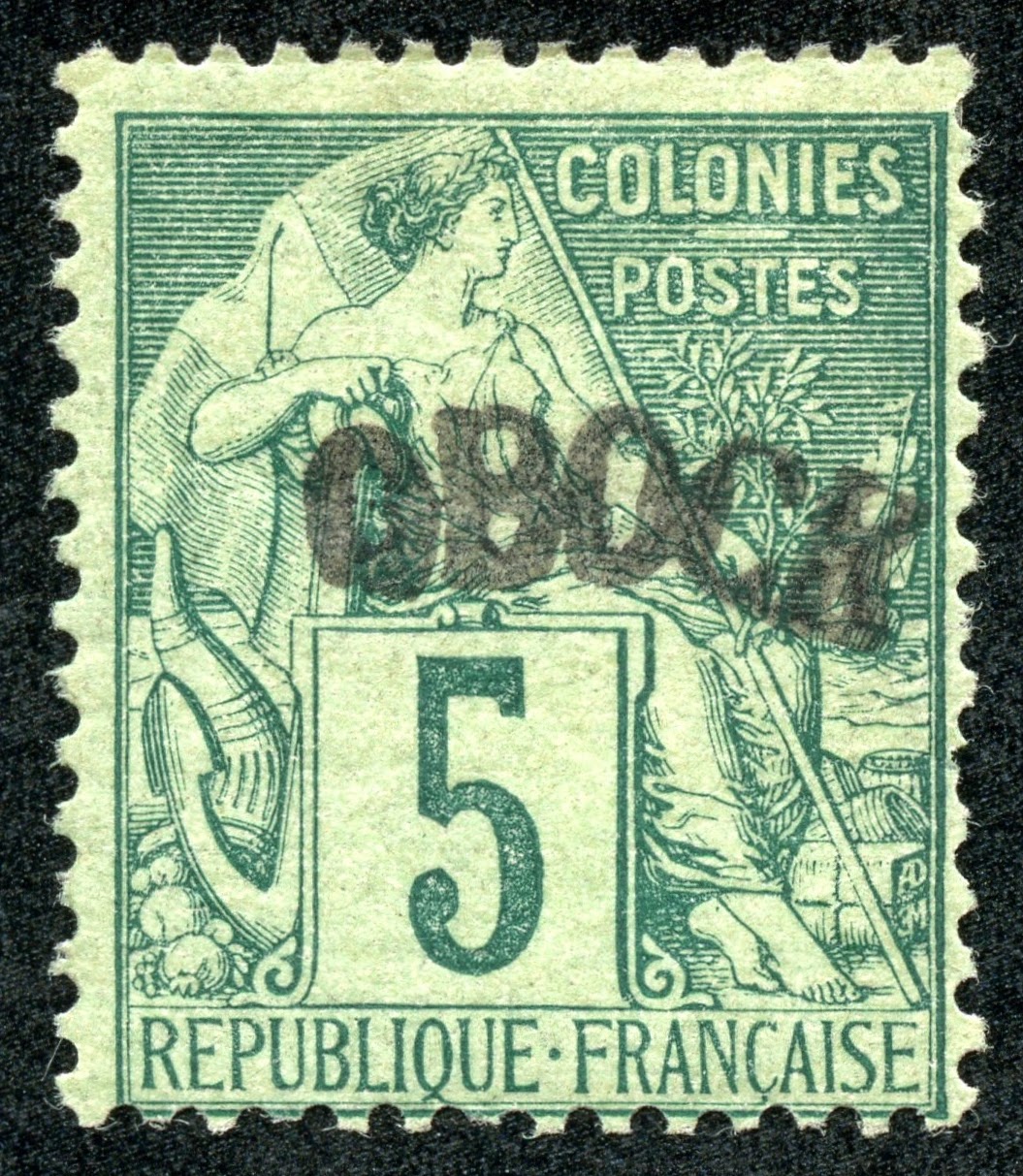 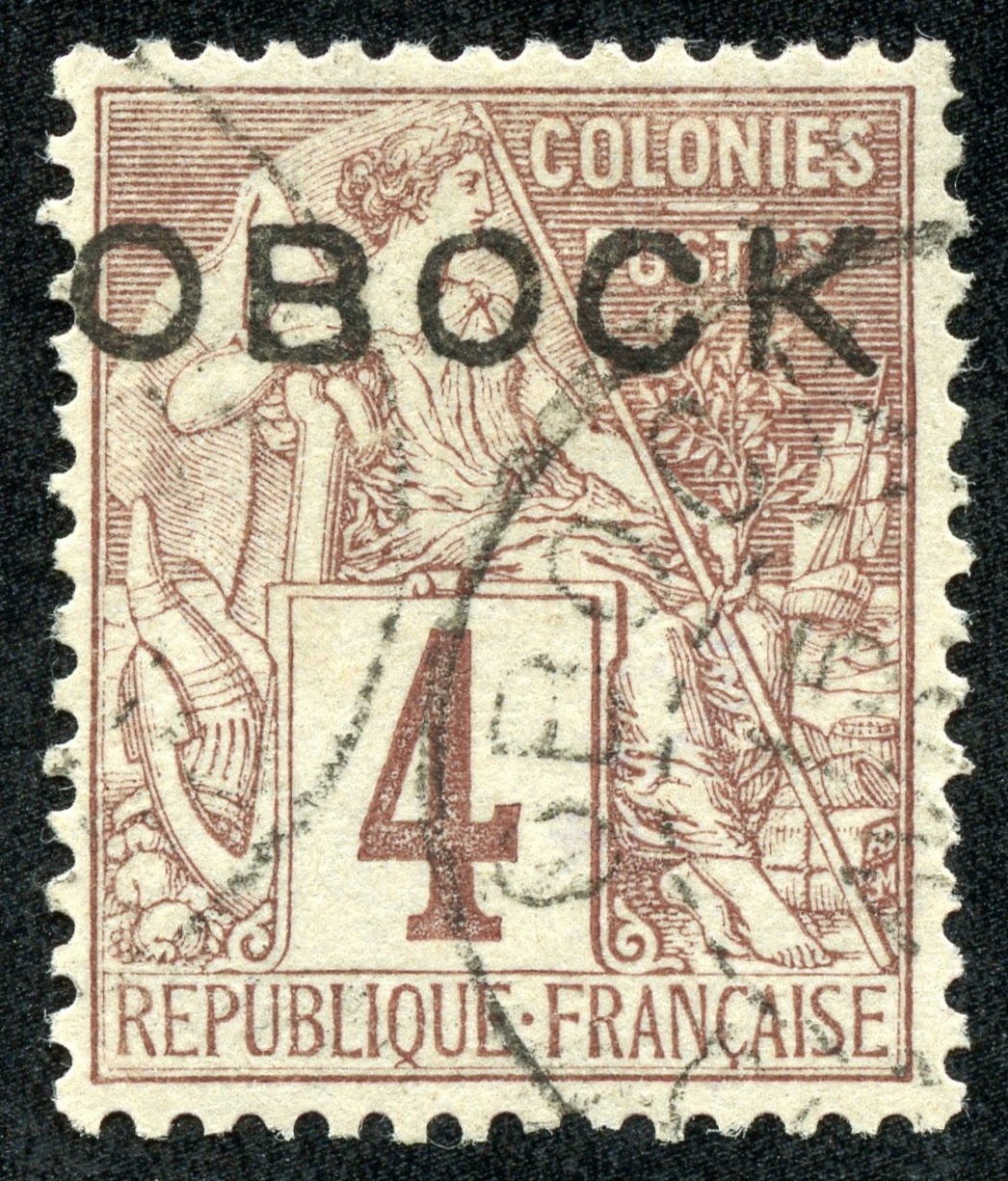 1892 Scott 12 4c claret/lavender
Stamps of French Colonies
Handstamped in Black
There was another handstamped issue of nine stamps produced in 1892 as illustrated here. Note the "Obock" postmark. Five stamps are CV $10+. 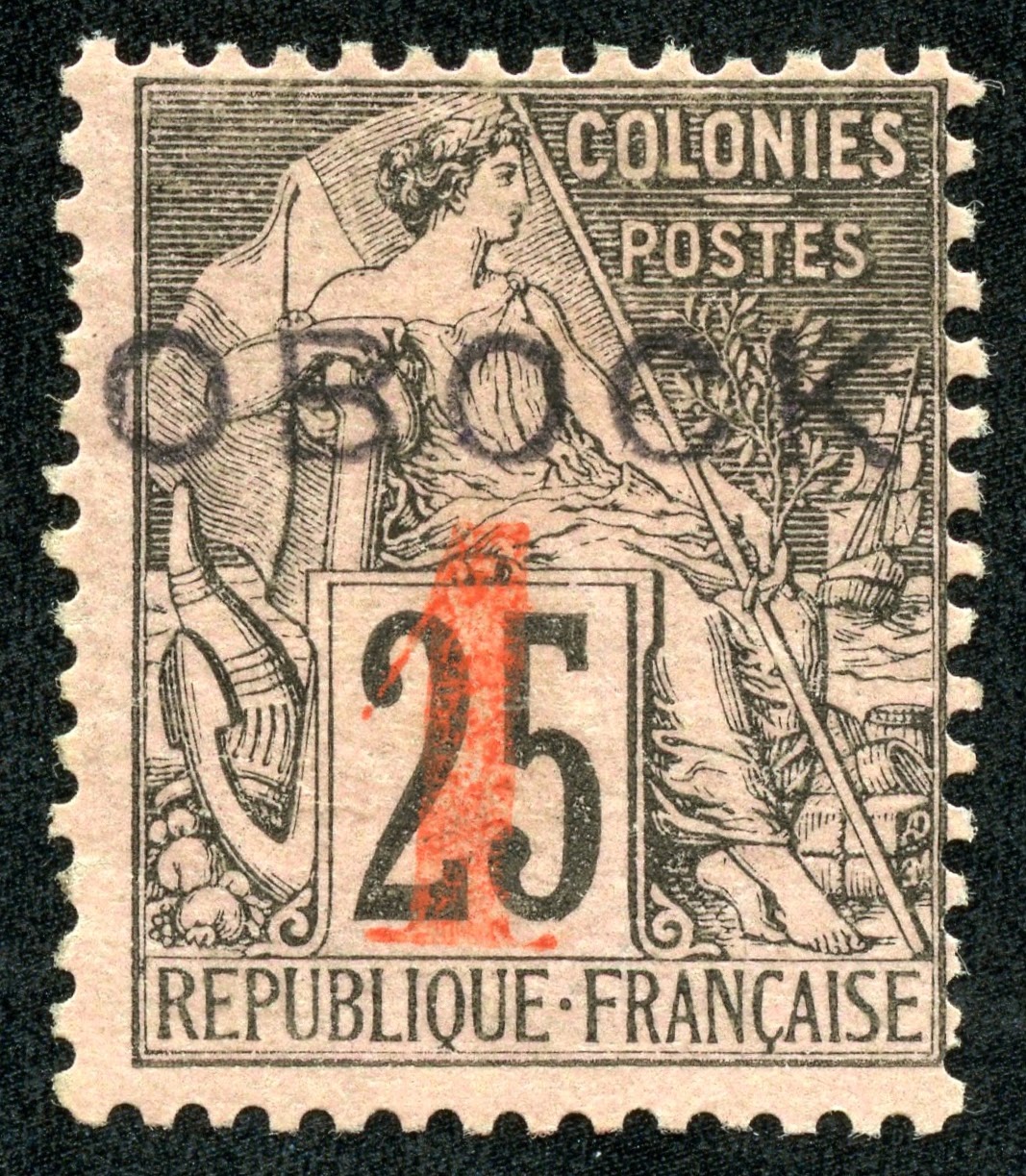 1892 Scott 21 1c on 25c black/rose
Stamps of French Colonies
Handstamped with additional Red Surcharge
Four of the preceding 1892 handstamped stamps were surcharged in various denominations and colors (red, blue, or black) to provide an additional eleven stamp issue in 1892. 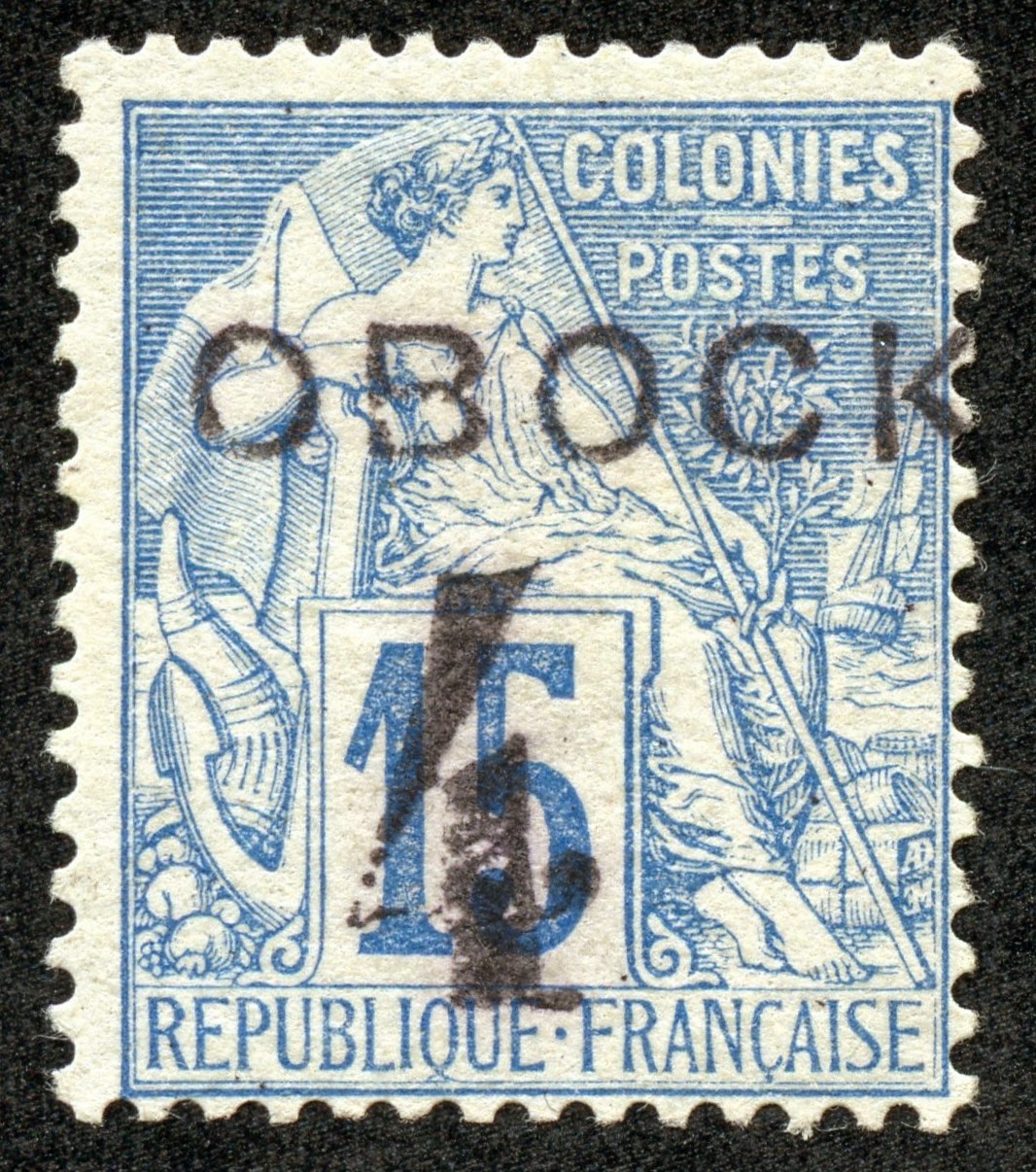 1892 Scott 24 4c on 15c blue
Stamps of French Colonies
Handstamped with additional Black Surcharge
The surcharged issue has a CV of $10+ for five stamps. 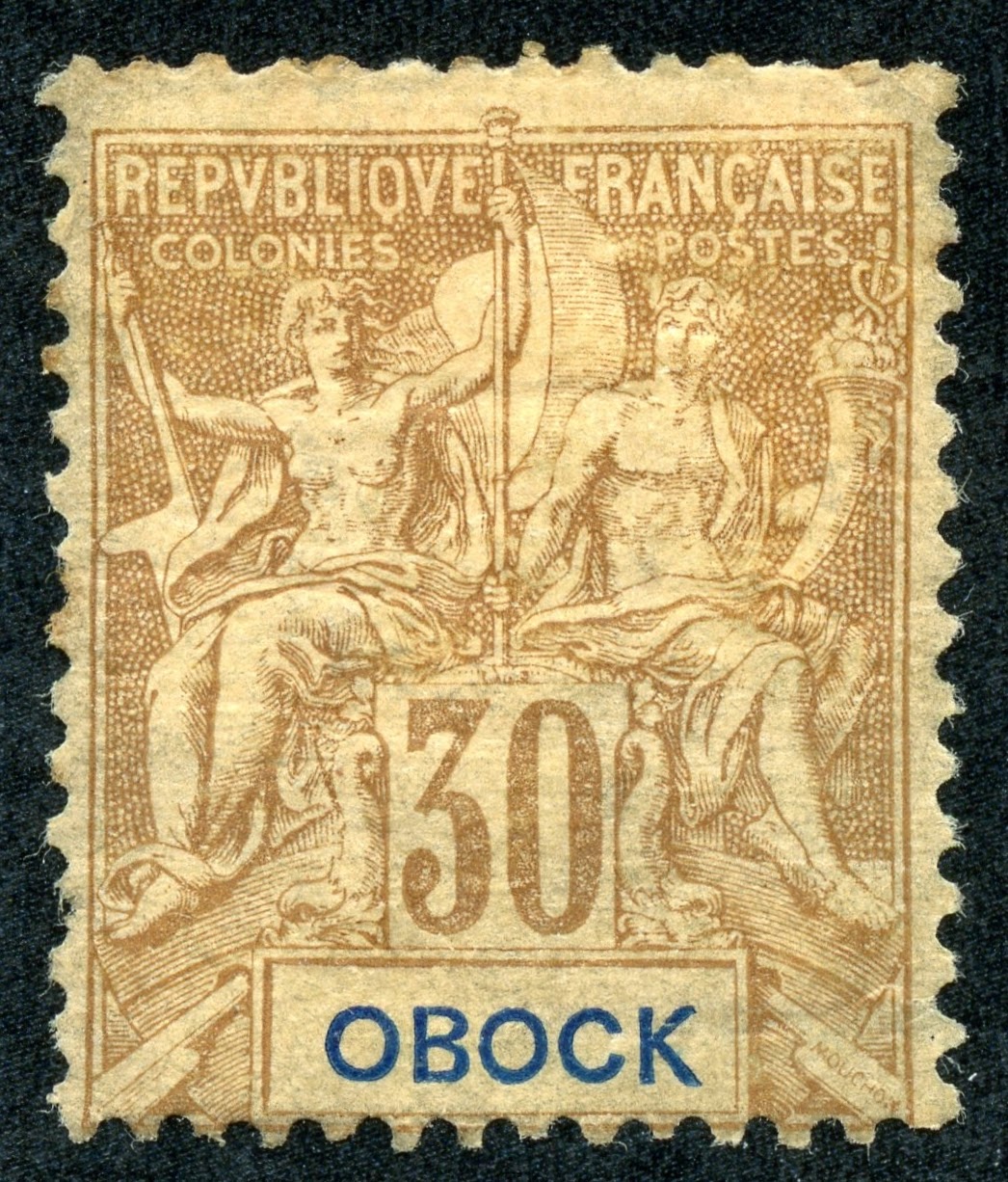 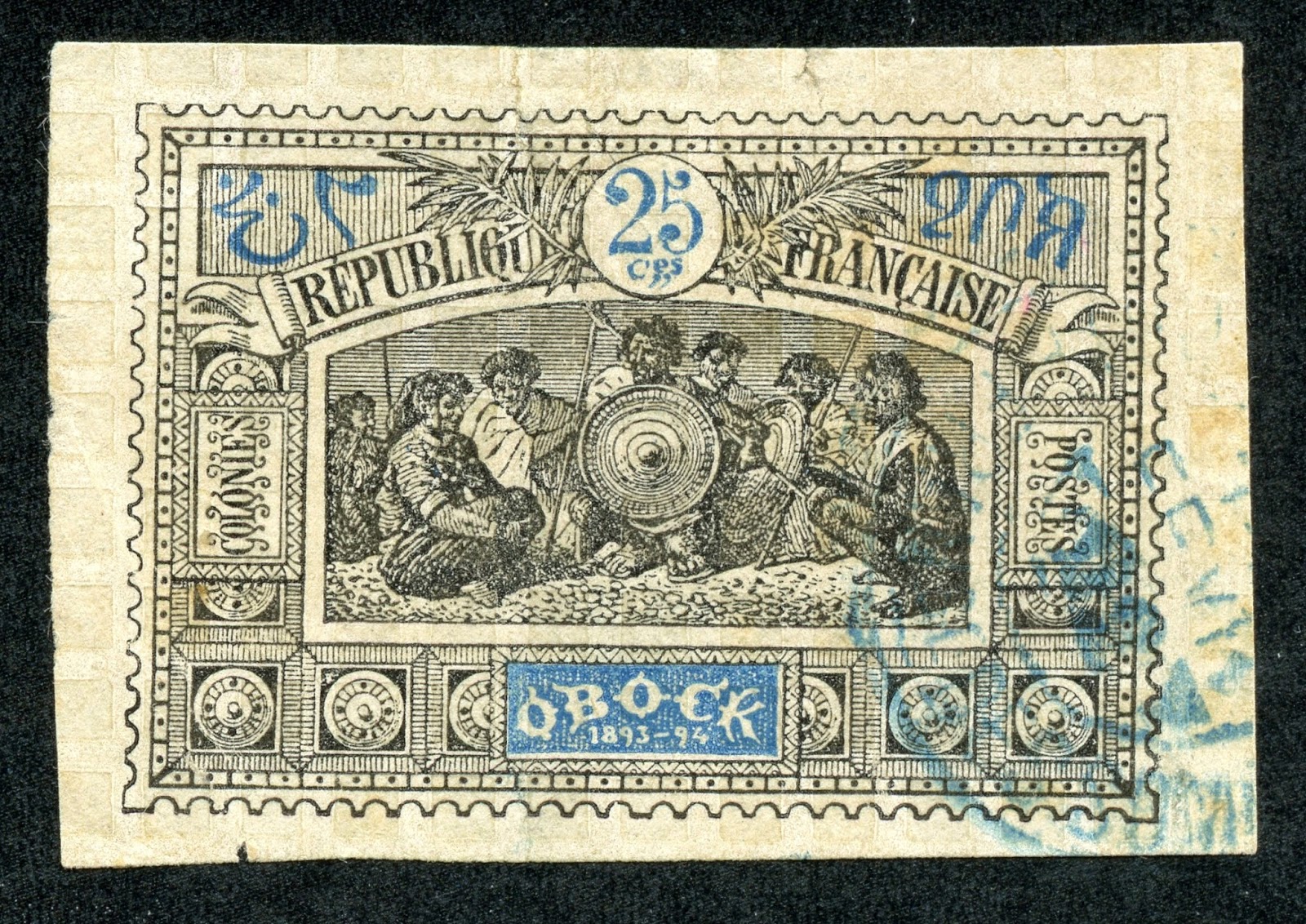 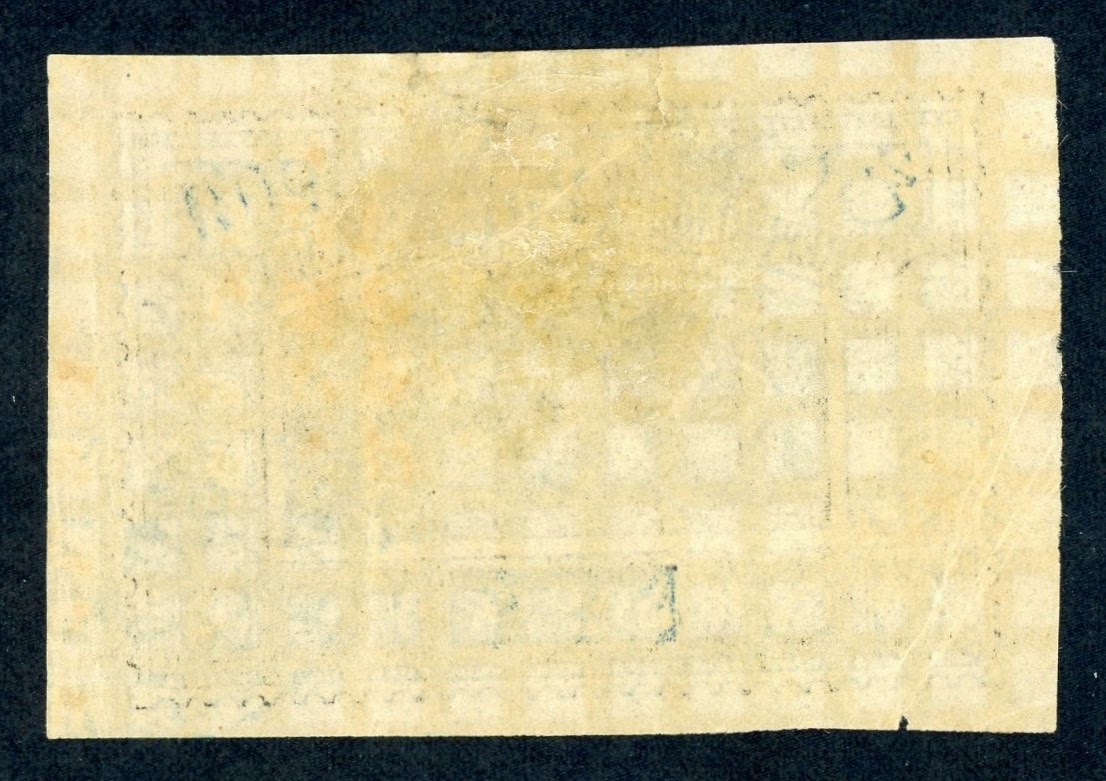 1894 "Somali Warriors" Issue
Quadrille Lines printed on Paper
The back of the stamps have quadrille lines. Twelve of the stamps in the issue have a CV ranging from $1+-$9

BTW, there were three surcharges produced in 1902, but they are listed with the stamps of the Somali Coast..

1892 Handstamped & Surcharged Issue in Deep Blue
Deep Blue (Steiner) has five pages for Obock. and includes a space for every Scott major number. 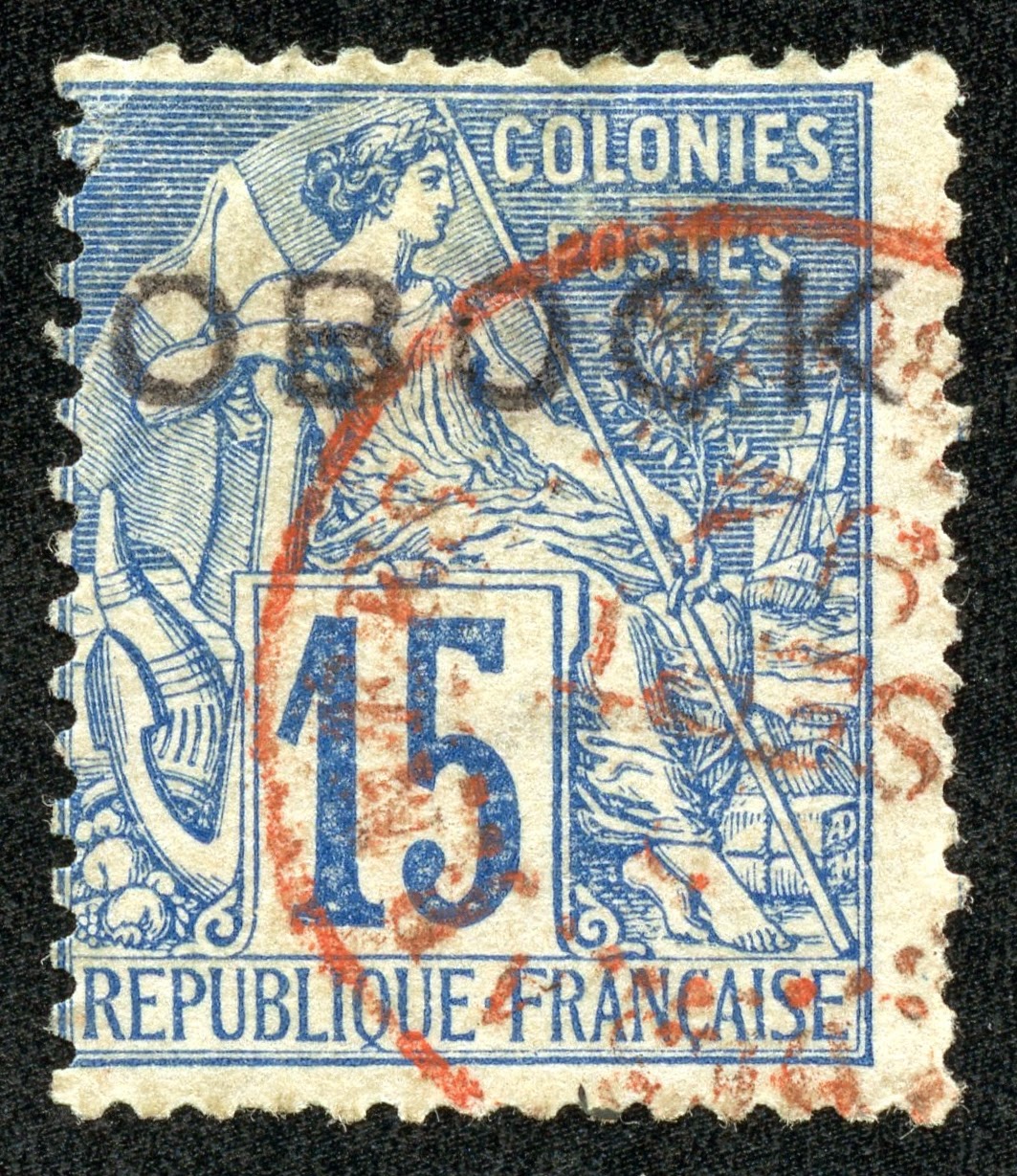 1892 Scott 15 15c blue
Stamps of French Colonies
Handstamped in Black
Big Blue
Big Blue '69, on two lines of one page, has 12 spaces for the stamps of Obock. Coverage is 15%. Considering the expensive nature of Obock stamps, the limited coverage is probably justifiable.

Obock in Big Blue
The Obock section shares a page with  "Nyassa" and "Prussia" in the '69 edition. The earlier 40s editions have Obock on the last page of the "Nyasaland Protectorate" section. The coverage appears to be the same for all editions.

Of note, "Obock" is not included in the Table of Countries in the '69 edition.

The coverage includes three spaces for the 1892 handstamped French Colonies stamps: the type illustrated and heading the "Big Blue" section above. All three of these stamps are CV $10+. 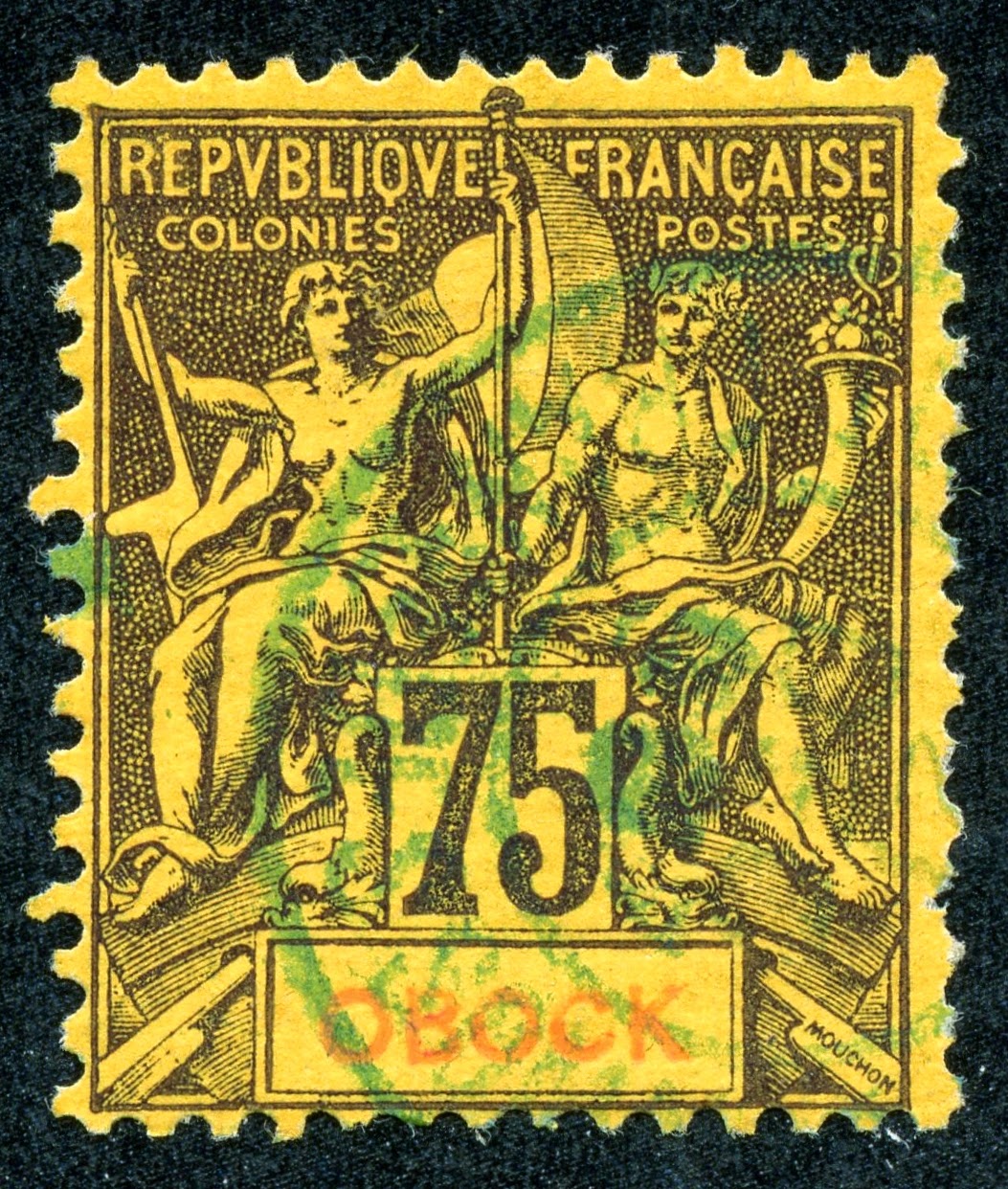 1892 Scott 43 75c violet/orange
"Navigation and Commerce"
Out of the Blue
The little town of Obock now has about 20,000 population, a  blip on the world scene. But in the philatelic sphere, it will be remembered and even cherished.