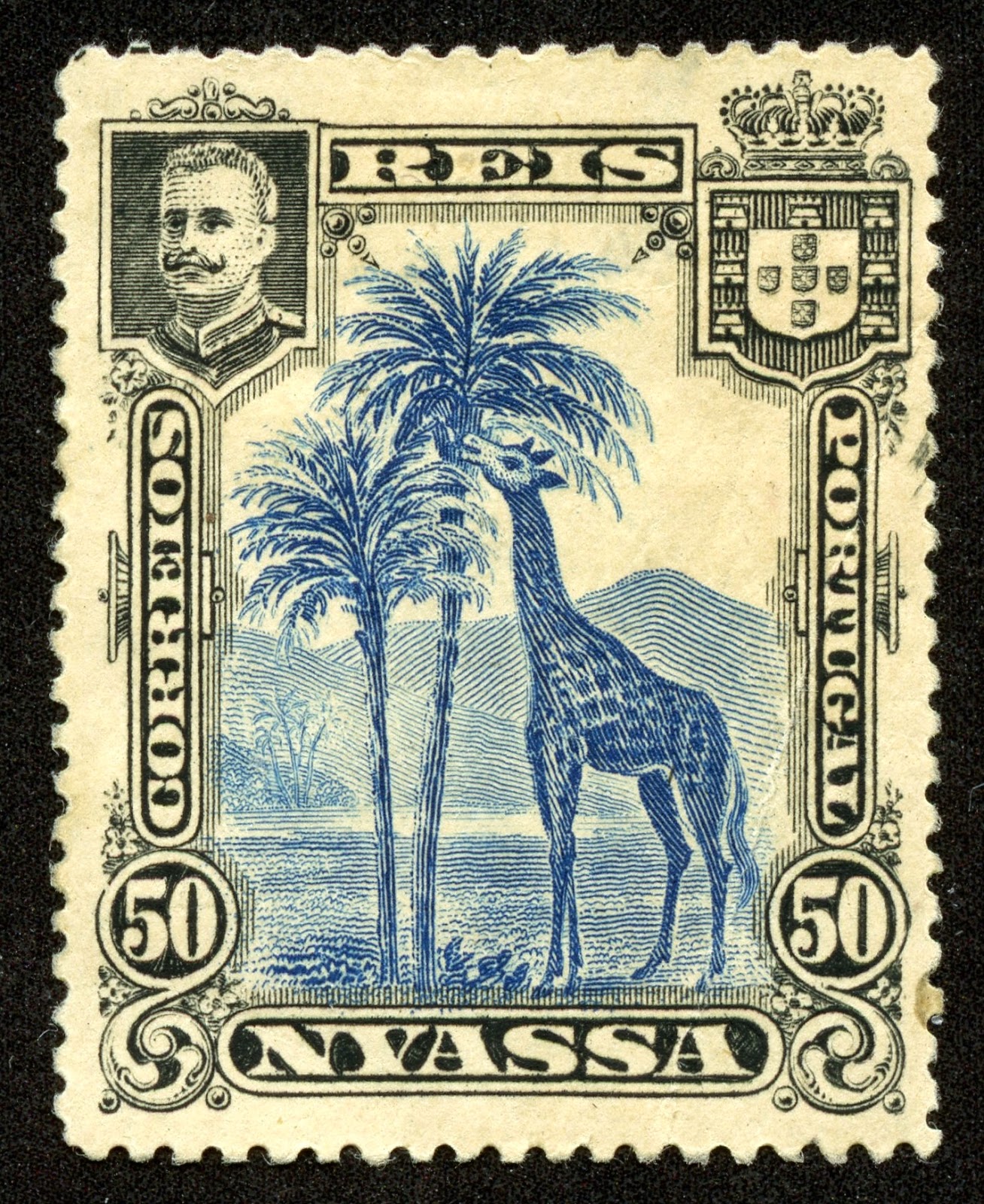 1901 Scott 32 50r black & dark blue "Giraffe"
Quick History
Nyassa  Company (or Niassa Company) received a Portuguese royal concession to administer the Nyassa and Cabo Delgado lands north of the river Lurio in Portuguese East Africa (Mozambique) between 1891-1929. This was really a sign of weakness, as the Portuguese lacked the ability to keep Portuguese East Africa from the encroachment of British and German forces. Hence, they turned one third of their lands over to three British companies in 1891- the Mozambique Company, the Zambezi Company, and the Nyassa Company. Specifically, the Nyassa Company represented British and French interests, although it was founded by a Lisbon merchant, Bernard Daupais. 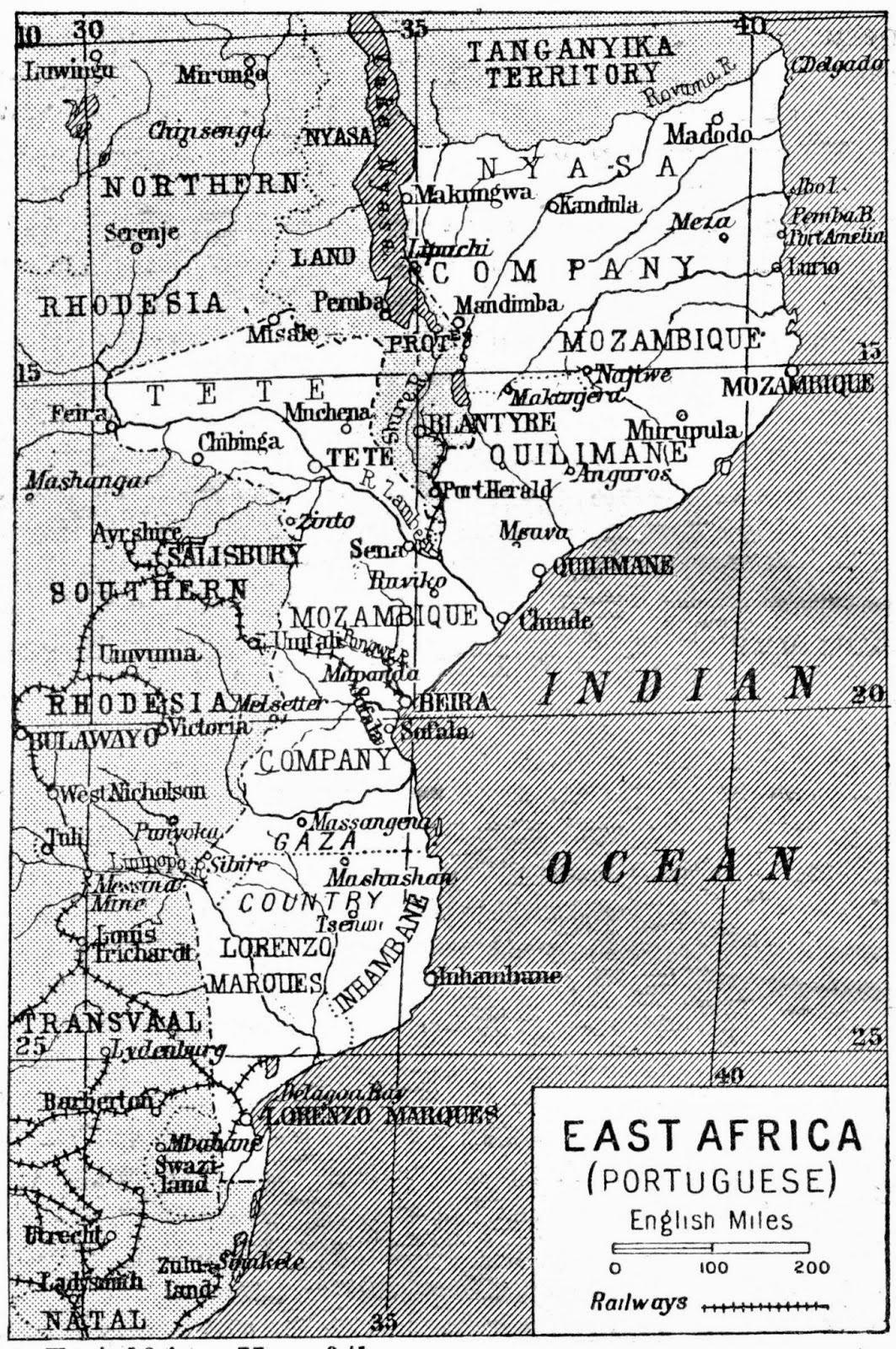 Map of Portuguese East Africa 1922
Note "Nyasa Company" in the north region
The Company instituted a forced labor policy (chibalo system), which required the natives to work the plantations. 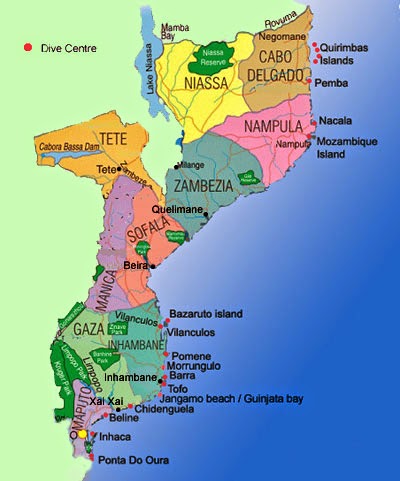 Note "Niassa" and "Cabo Delgado"
Present Day Mozambique
O.K., does that mean we will have the same old, same old, run of Portuguese colony stamps?

By 1901, the Company arranged (with permission) for printing it's own designs by Waterlow and Sons in London. And the subsequent stamp issues are....magnificent!

But we have to be realistic- these stamps were intended for the philatelic market (Waterlow and Sons must have made a killing! ;-). Most of the printings of an issue were never sent to Nyassa.

Although tons of stamps were sold, ultimately, the Portuguese government was not impressed, and the concession was terminated in 1929. Mozambique stamps were then used. 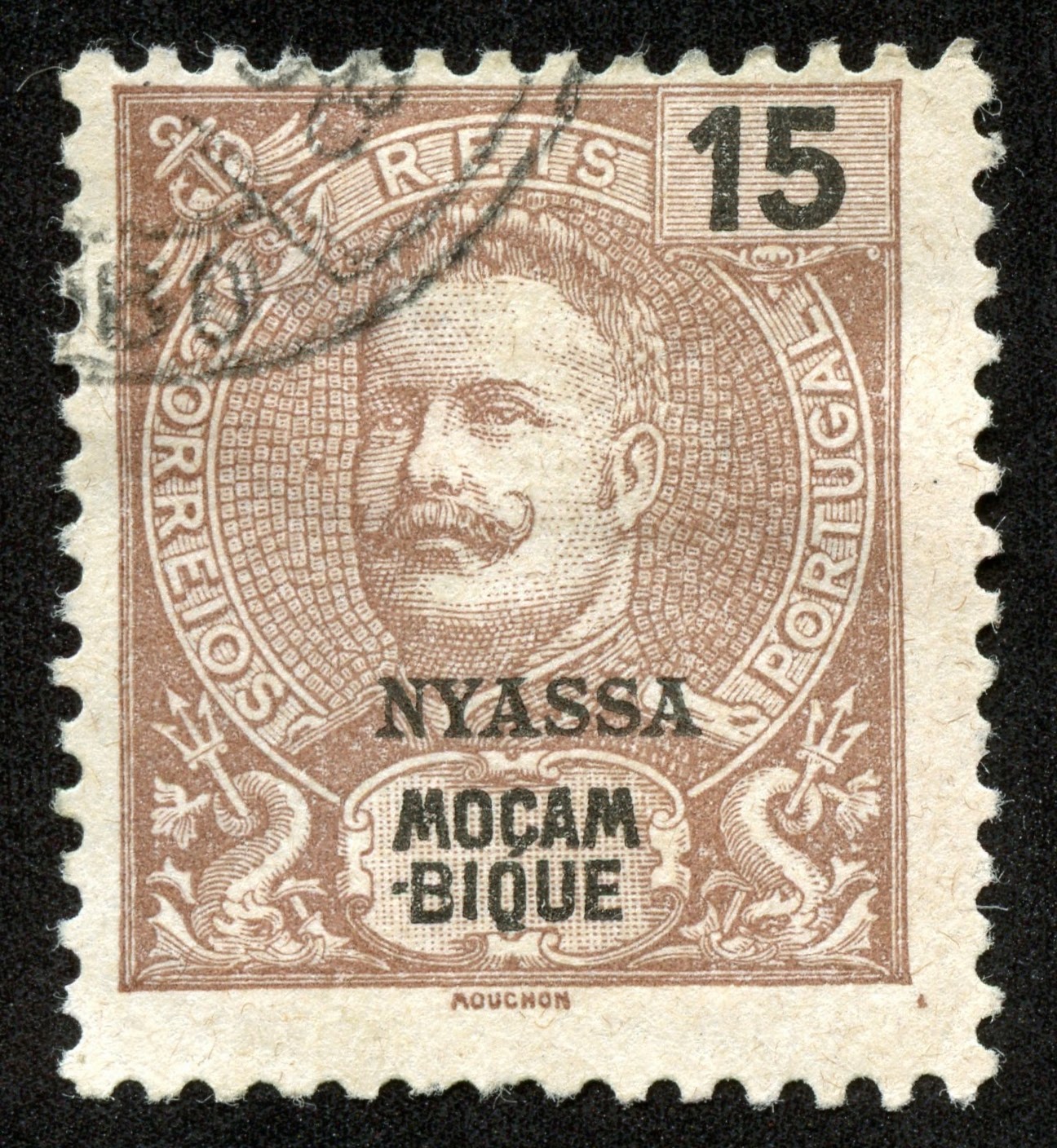 In fact, it is quite remarkable that most of the pictorials from Nyassa have a low CV- even lower than what one would expect for Portuguese colonies. The Nyassa Company, no doubt, made a nice income from the stamp sales ( as did Waterlow and Sons in London that produced many of the issues), but they must have produced more supply than demand. Today's WW classical era collector is the beneficiary. 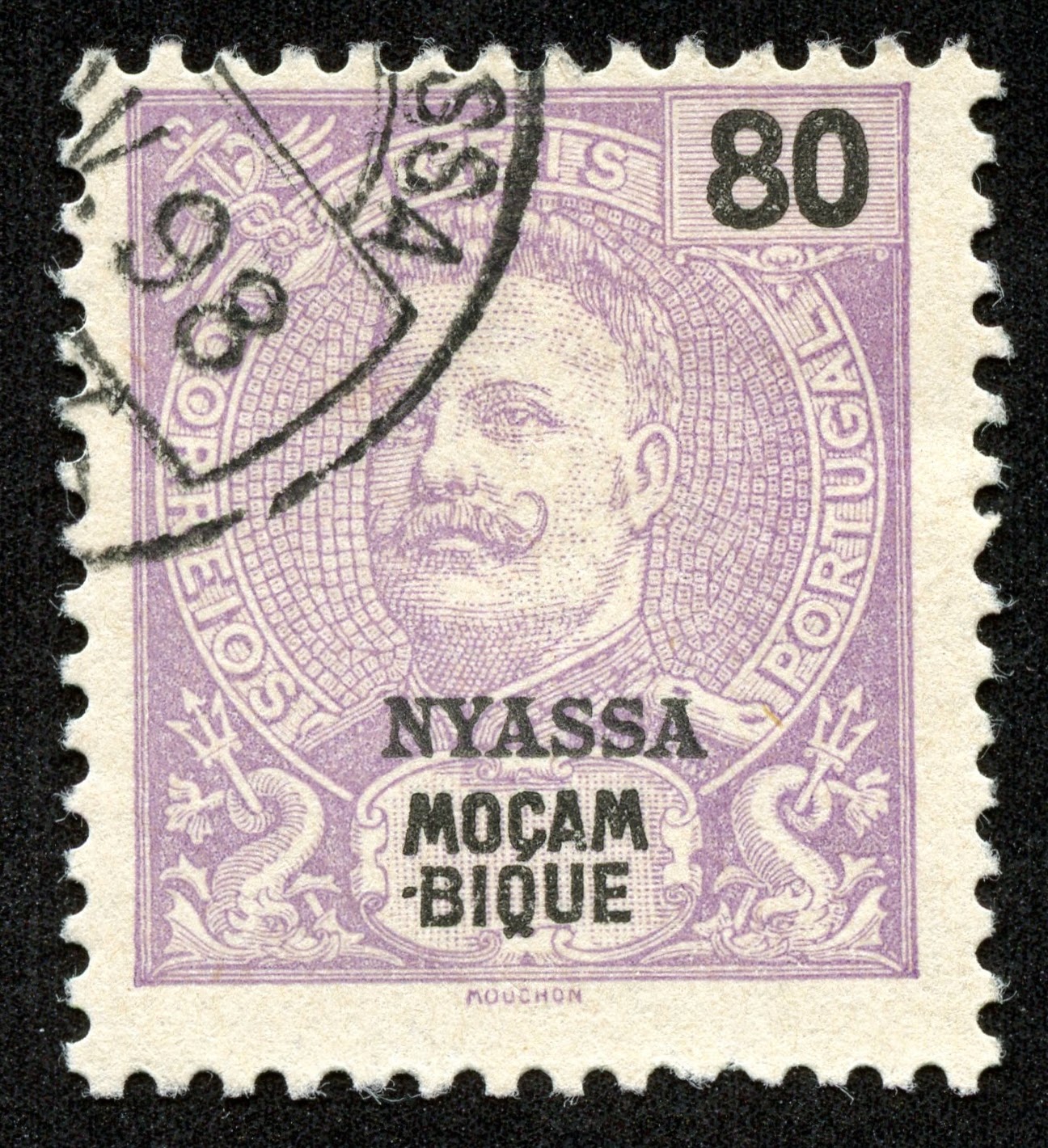 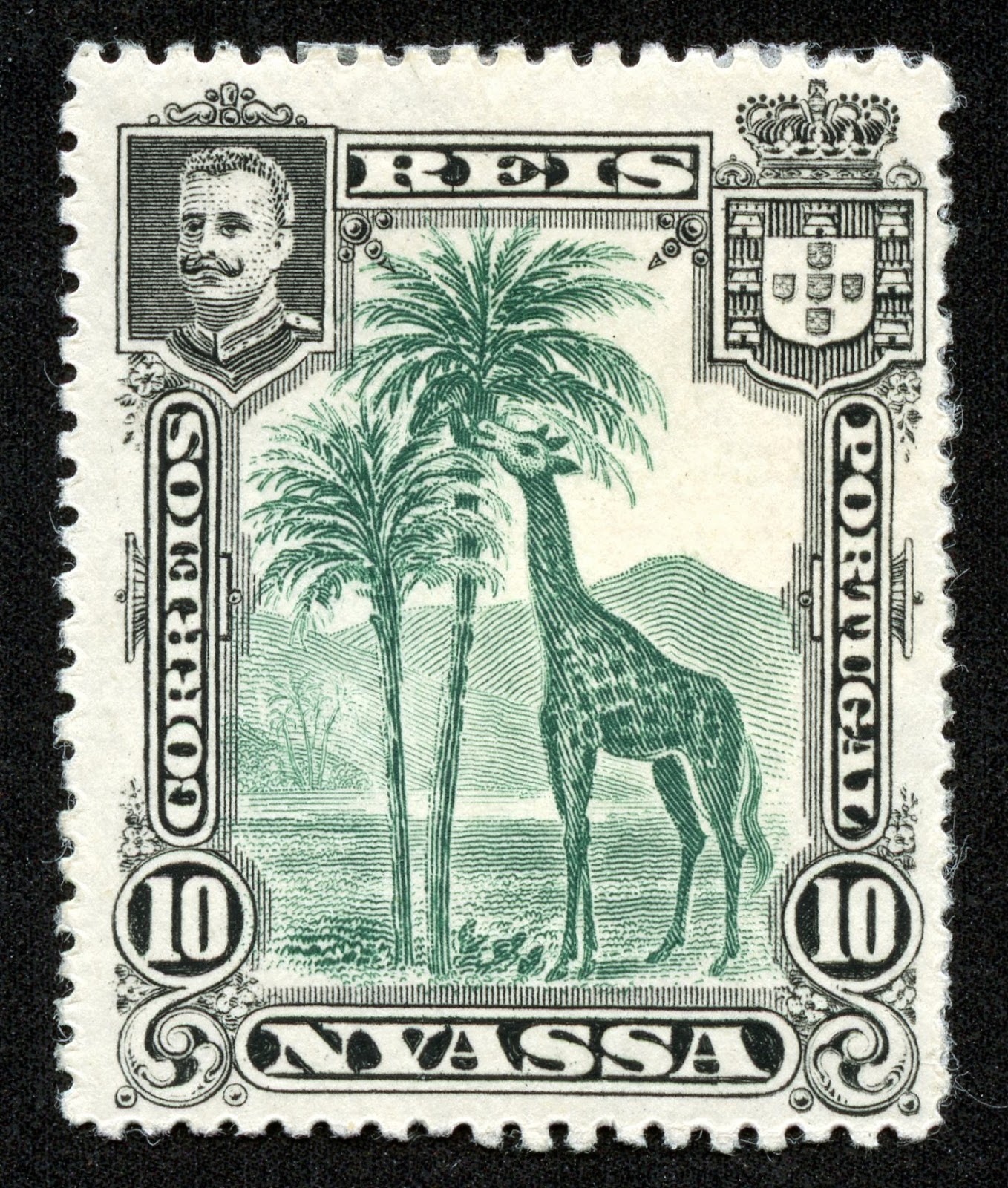 1901 Scott 28 10r black & deep green "Giraffe"
Well, the next issue in 1901 is definitely not in the "ho-hum" category. ;-) It has a small vignette of Carlos I in the upper left corner, and a Coat of Arms in the upper right corner, but everything else is......wonderful!

The lower seven engraved bi-colored denominations feature a giraffe eating the leaves of a palm tree. 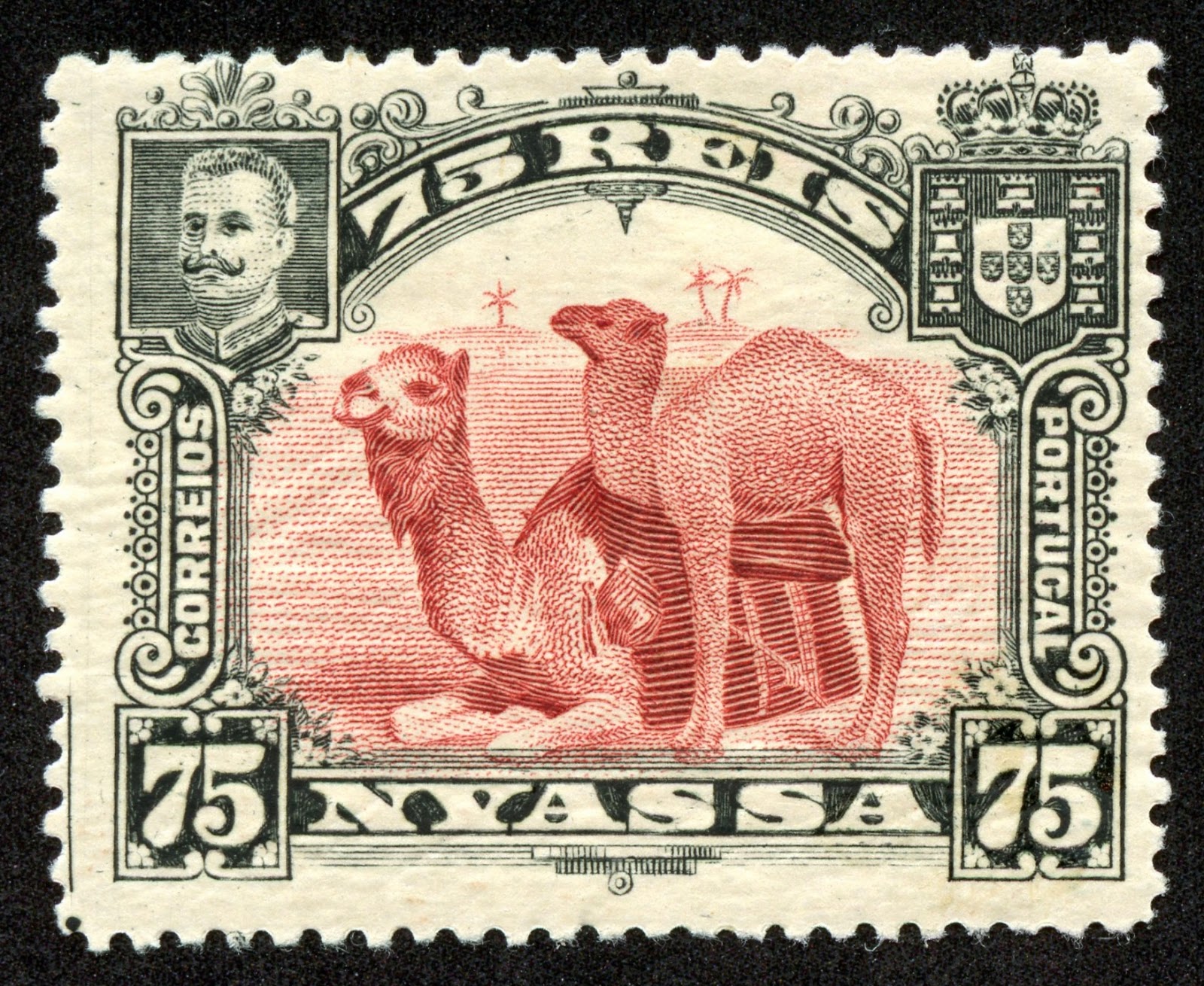 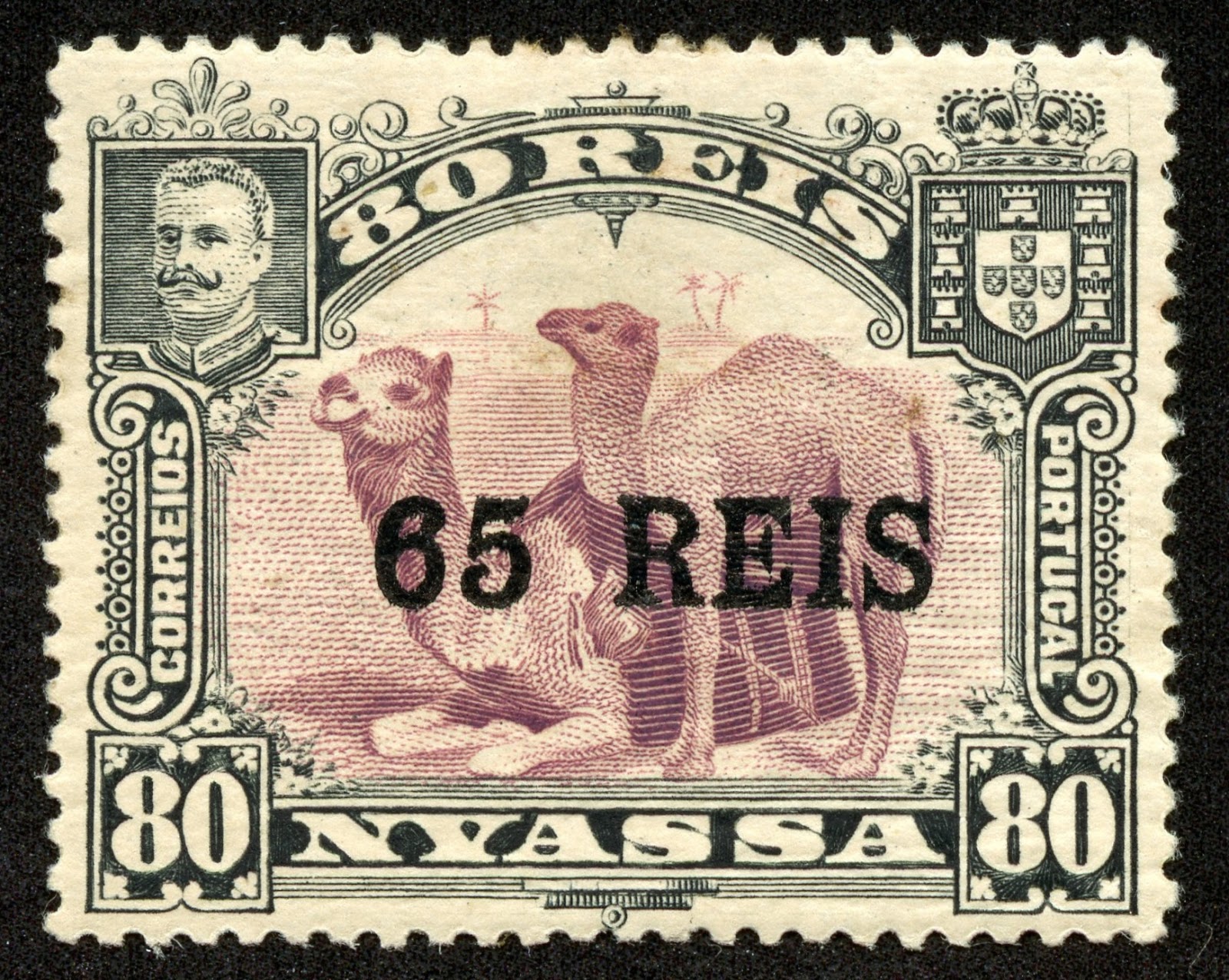 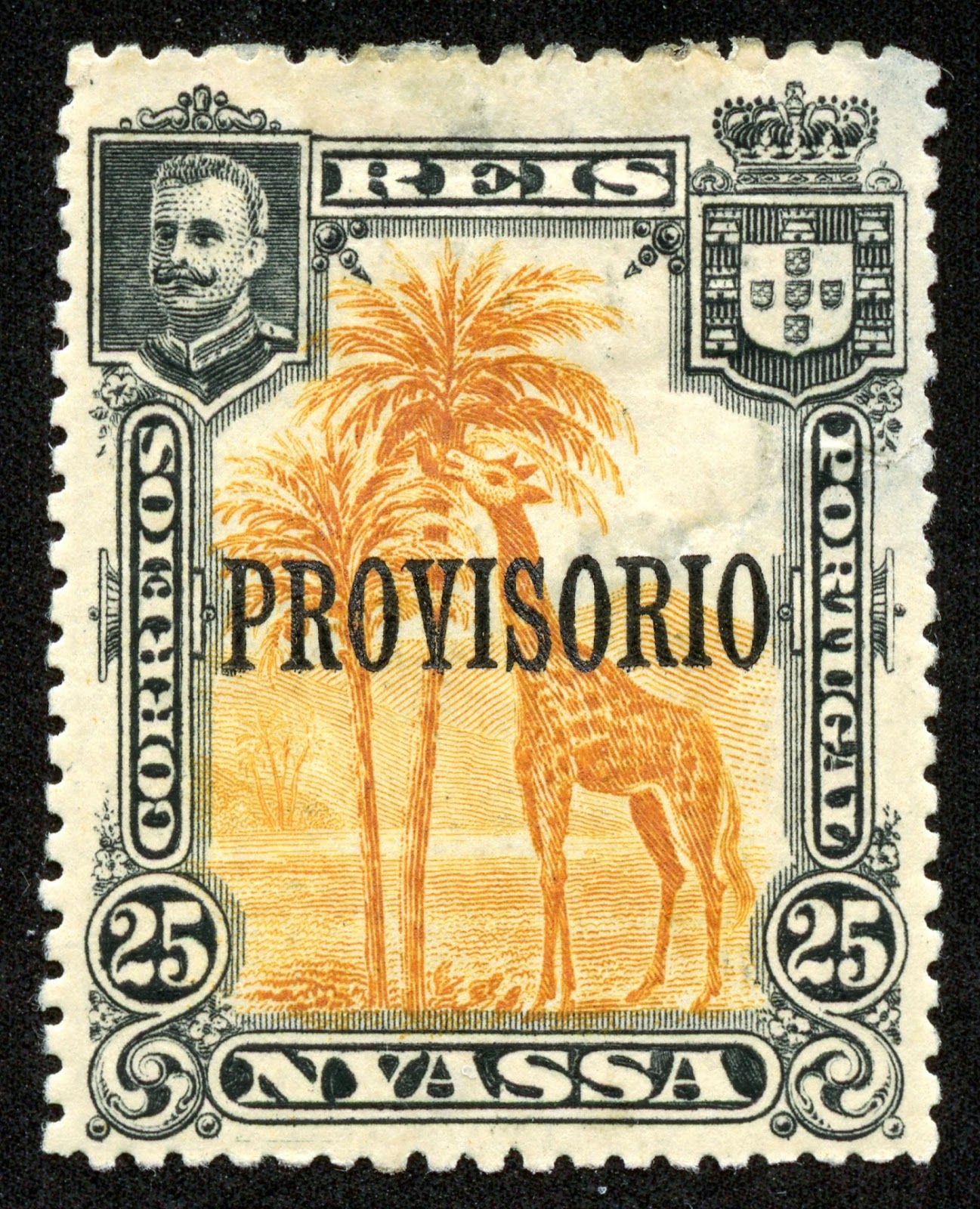 1903 Scott 43 25r black & orange "Giraffe"
Overprinted "Provisorio"
A two stamp "temporary" set was also released in 1903- but the truth is the "Provisorio" labeled stamps were used through 1910- so "hardly" temporary. 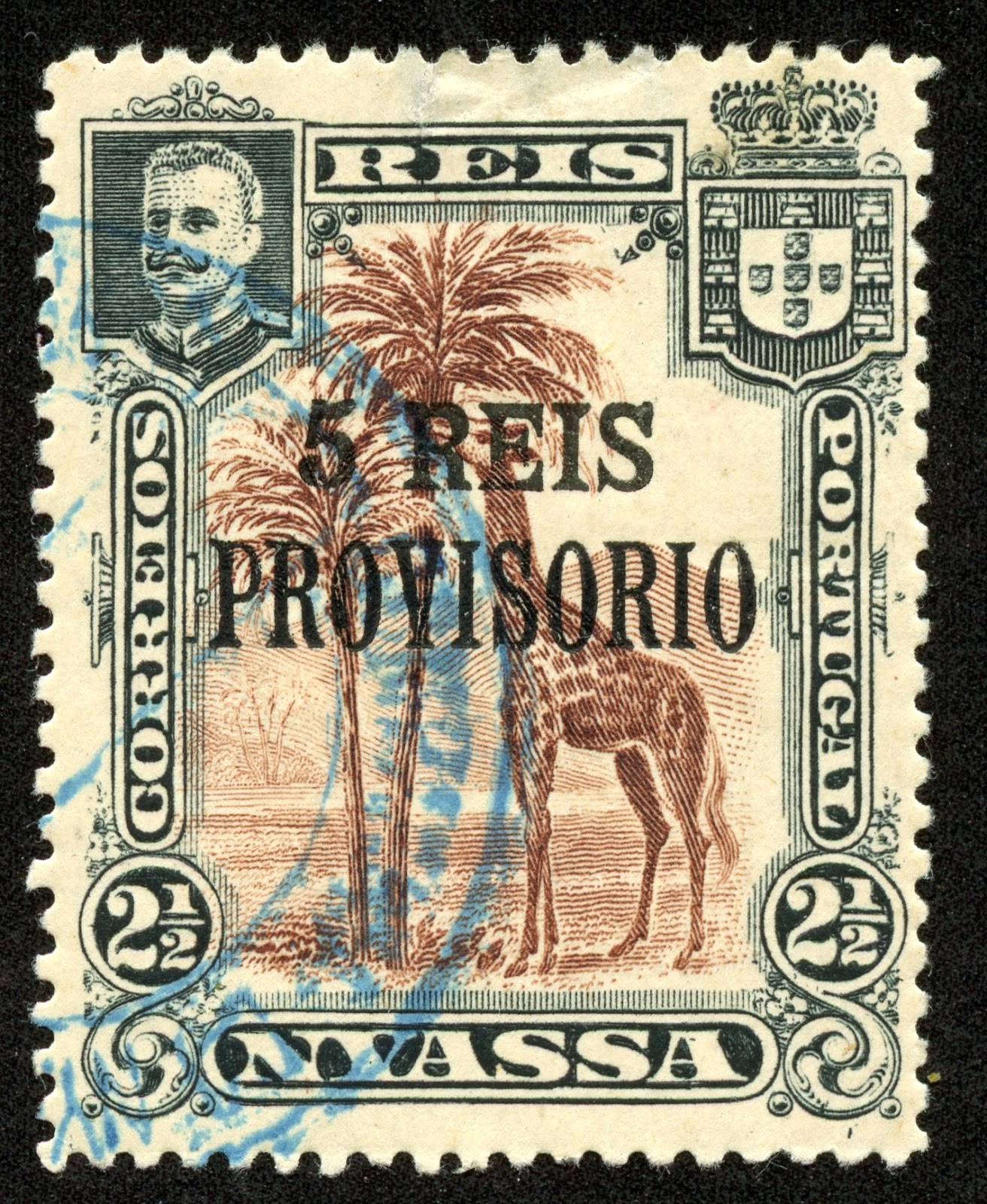 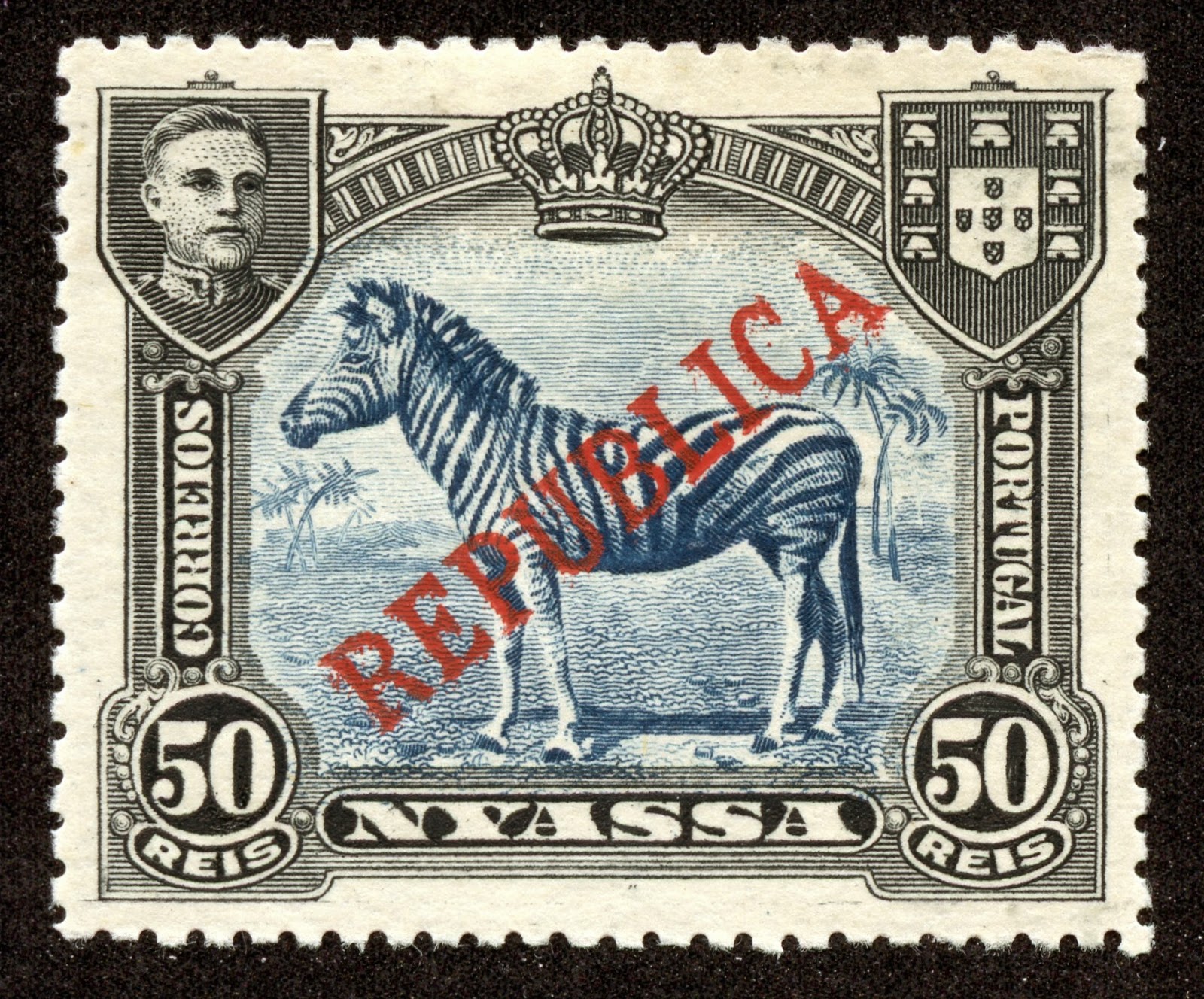 1911 Scott 56 50r black & deep blue "Zebra"
Red overprint
King Carlos was assassinated in 1910.  His young (age 19) son Manuel briefly became king, but then had to flee. The monarchy was overthrown, and "Republica" was overprinted on almost all Portuguese colony stamps in 1911.

In 1911, a new 12 stamp issue was released. The stamps had "Manuel" portrayed (already an anachronism), but with a red "Republica" overprint. The lower six denominations showed a Zebra. 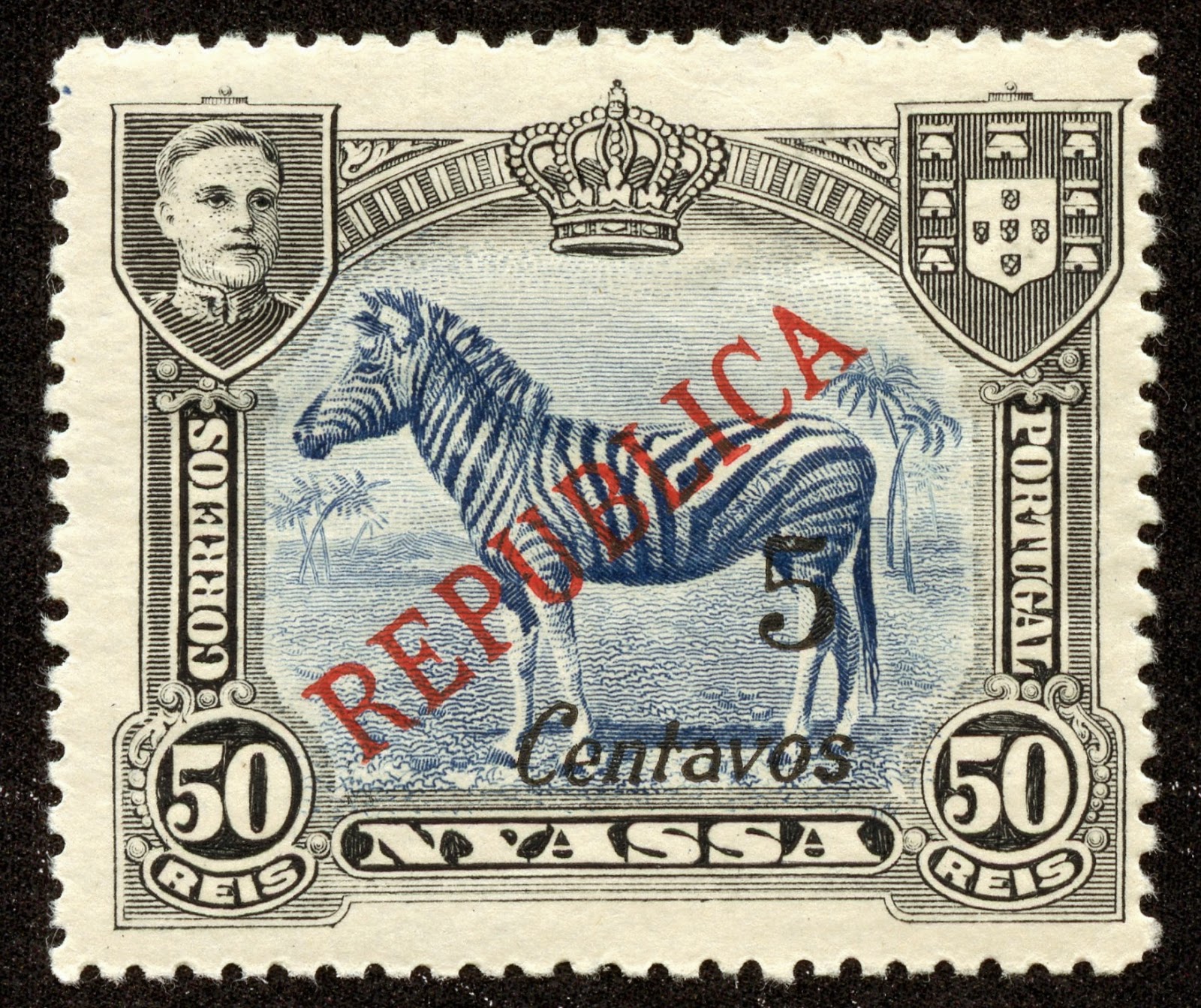 The "Lisbon" overprint for the surcharge, obviously printed in Lisbon, show letters in "Centavos" that vary from thick to thin in width. (This is somewhat subtle, so each stamp "centavos" overprint should be carefully examined.) 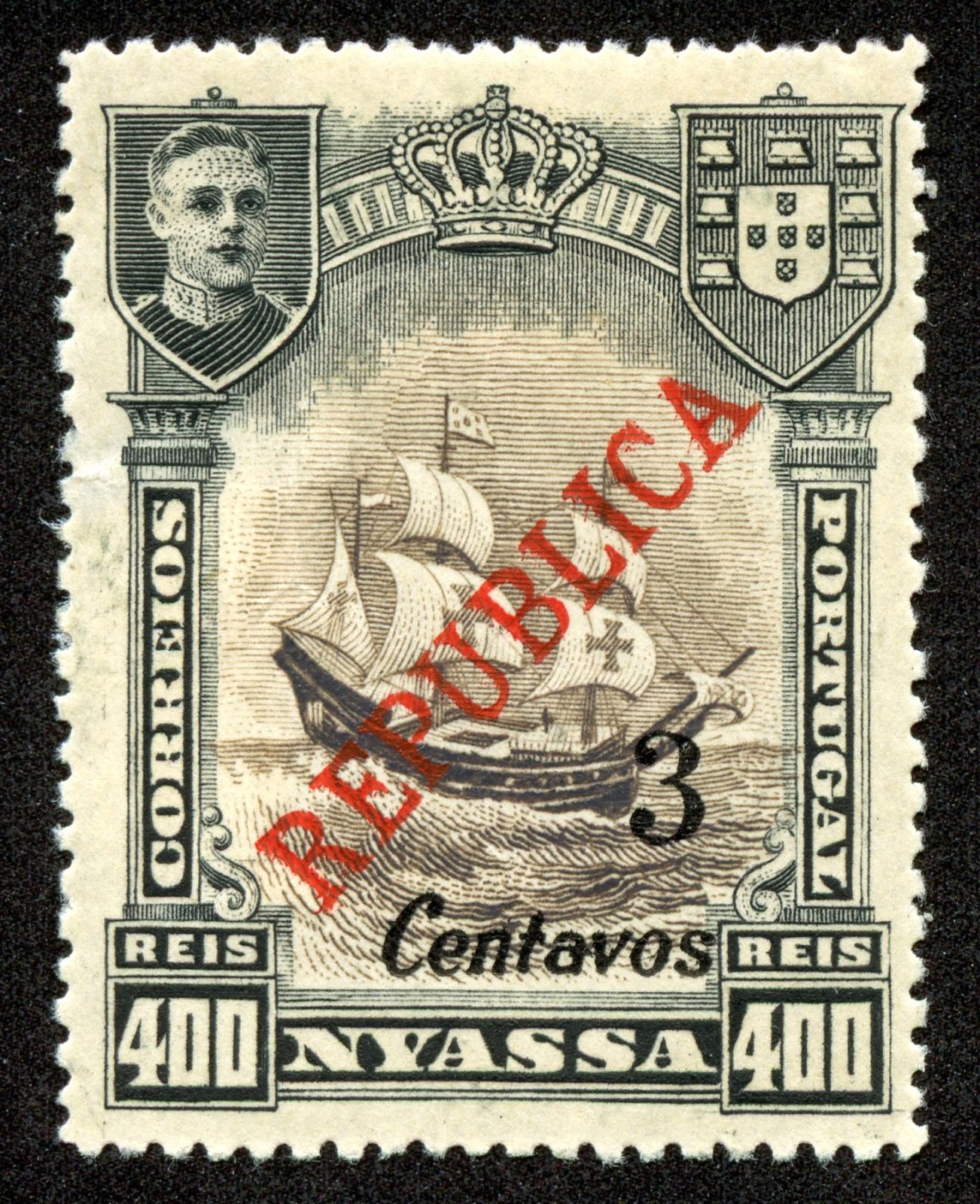 1921 Scott 100 3c on 400r
Vasco da Gama's Flagship "San Gabriel"
London Surcharges
The second 1921 surcharged issue- also 12 stamps- was the "London" overprint. The image I am showing here - the "San Gabriel"- is found on six stamps of the issue.

This overprint has "centavos" in a darker shade than the "Lisbon" overprint, and the width of the letters is uniform. Obviously, this issue was overprinted/surcharged in London. (If you are still having difficulty determining the two overprint varieties, Scott has more information available.)

The CV is $1+. And, apparently, this issue was never sent to Nyassa, but went directly into the philatelic trade. 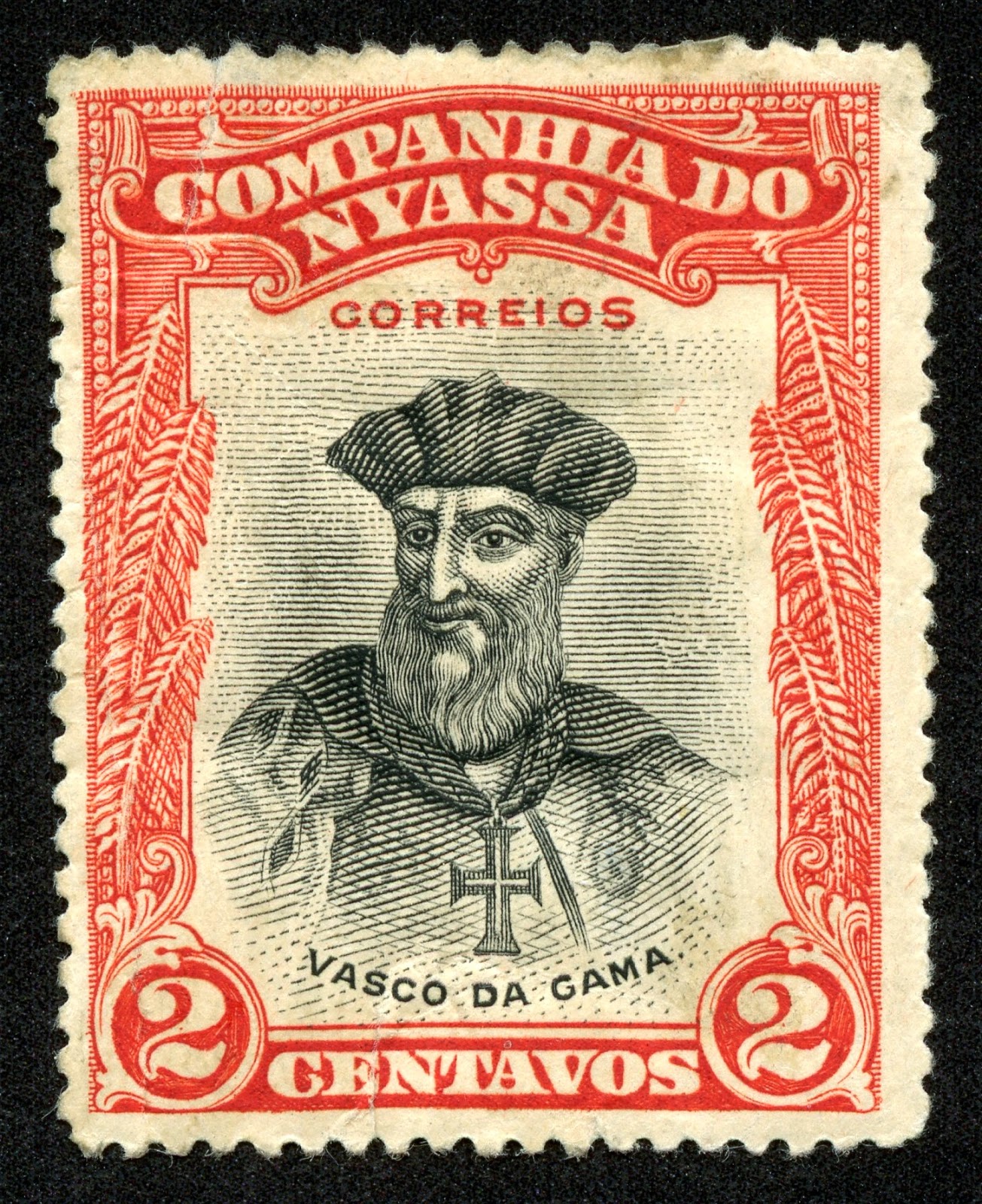 1921-23 Scott 110 2c red & black
"Vasco da Gama"
Between 1921-23, an absolutely wonderful engraved 20 stamp 5 design issue was produced. One could argue that this issue might be the nicest ever produced by a Portuguese colony. Seriously. 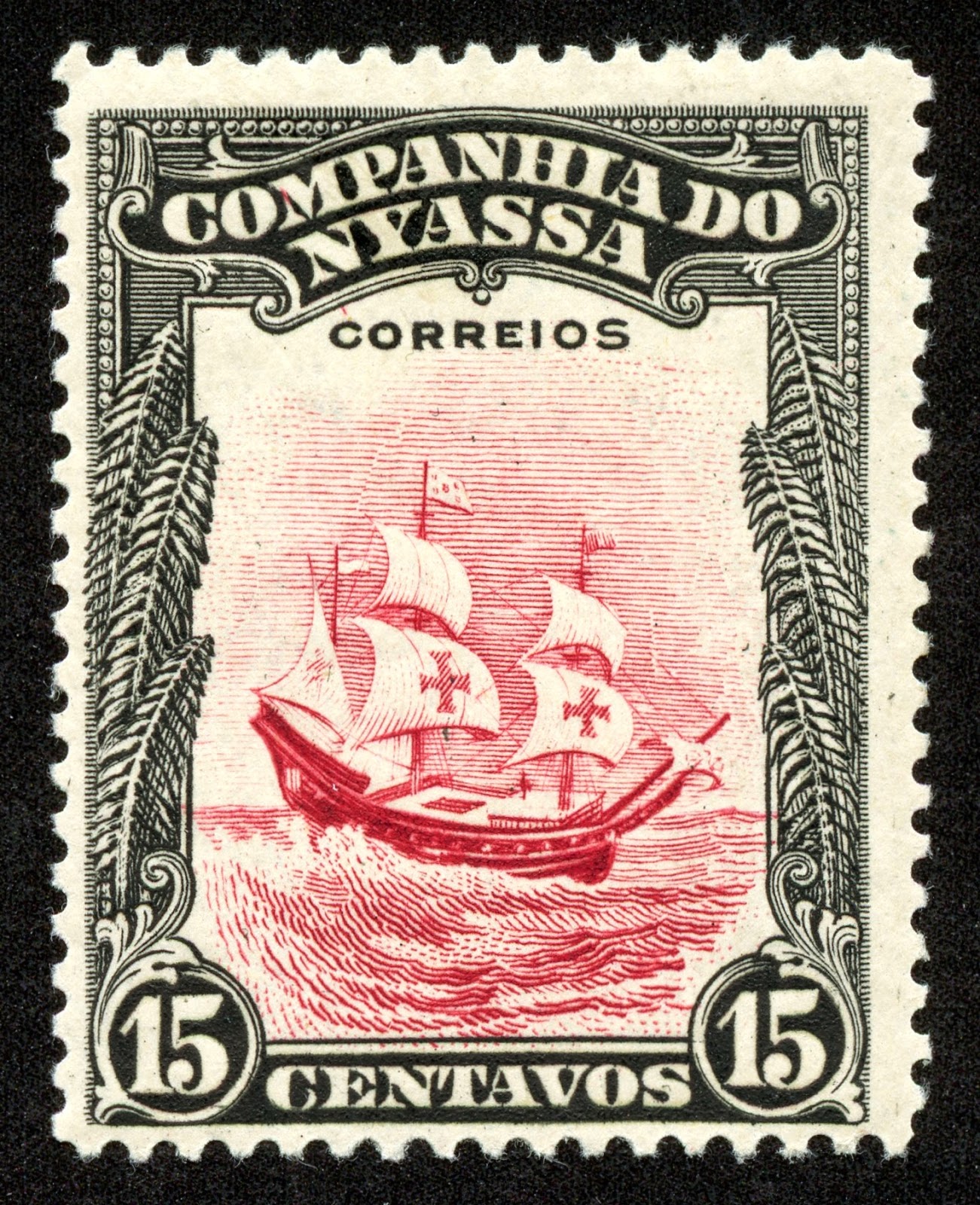 And the amazing thing is the CV is <$1, save for the two highest denominations @ $2+. One tends to forget that stamp design beauty and CV cost are independent variables. 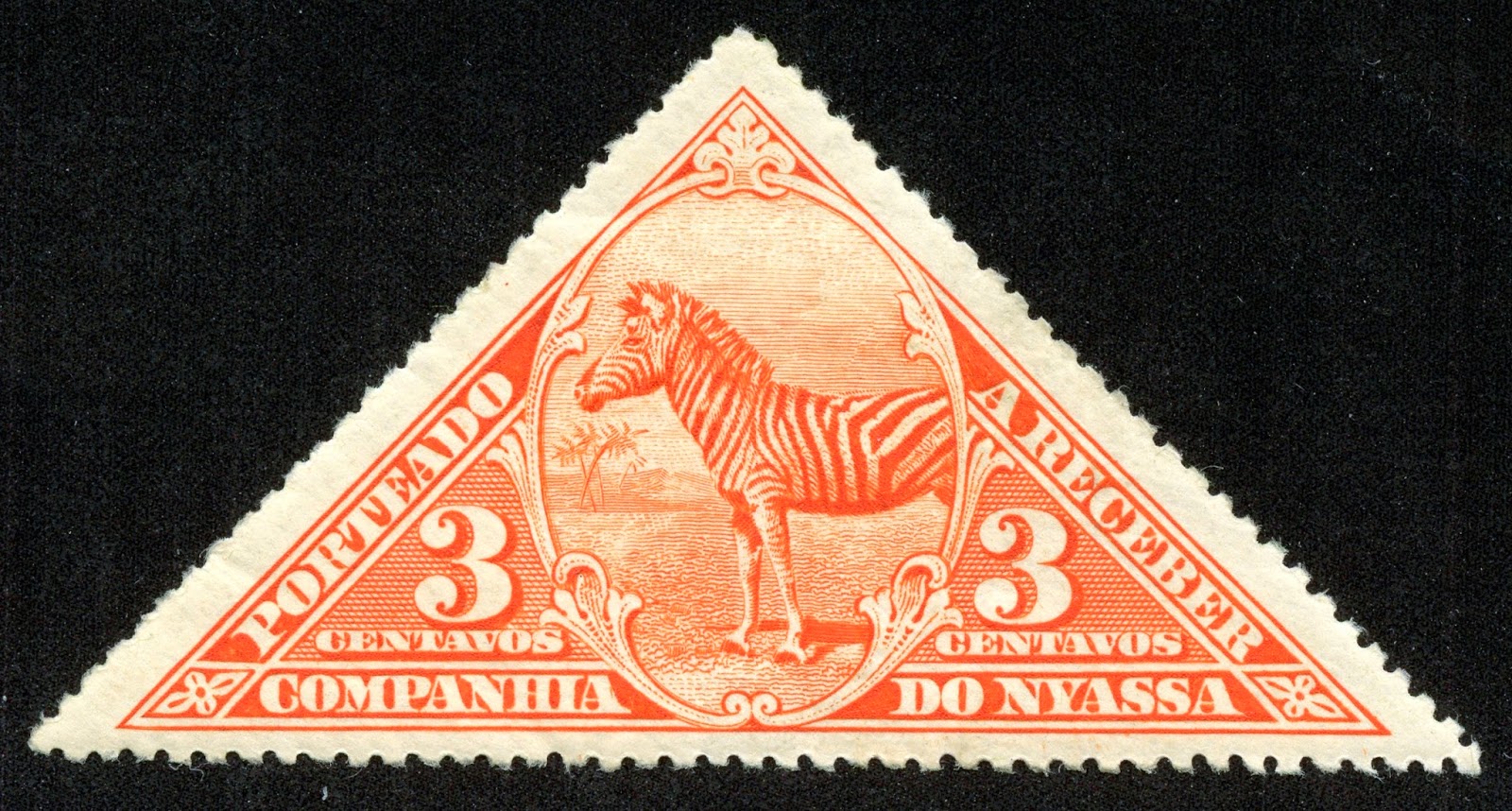 1924 Postage Due Scott J4 3c red orange "Zebra"
The last issue I will show is the triangular nine stamp set produced in 1924 for the purposes of postage due.

Waterlow and Sons, no doubt, produced these magnificent specimens for the stamp trade, as there is no evidence that they were actually used in Nyassa. 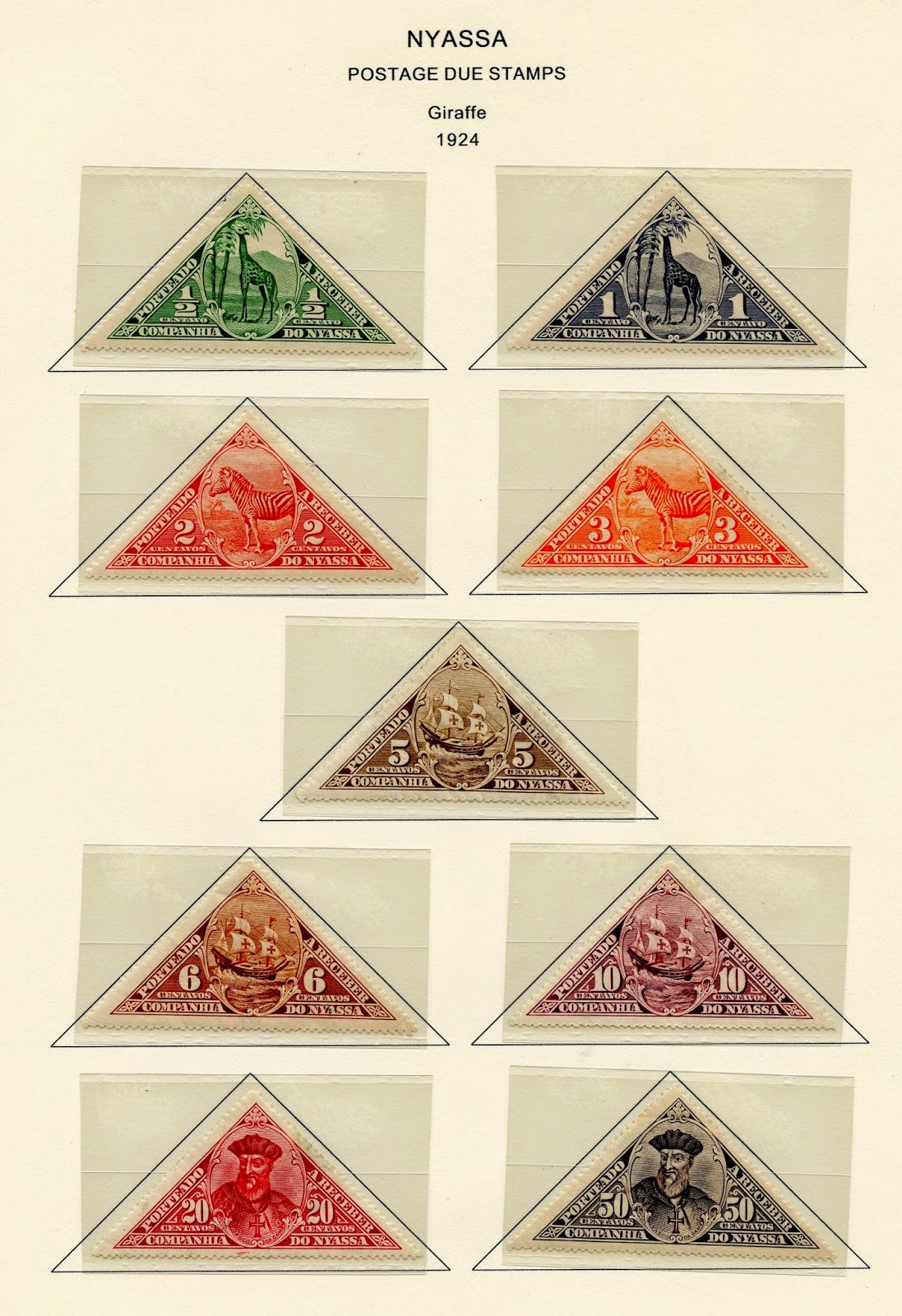 Nyassa 1924 Postage Due issue in Deep Blue
Deep Blue (Steiner) has eleven pages for Nyassa, and has a space for all the major Scott numbers. There is a page each for the Lisbon and London surcharges for the 1921 issue. Nice. 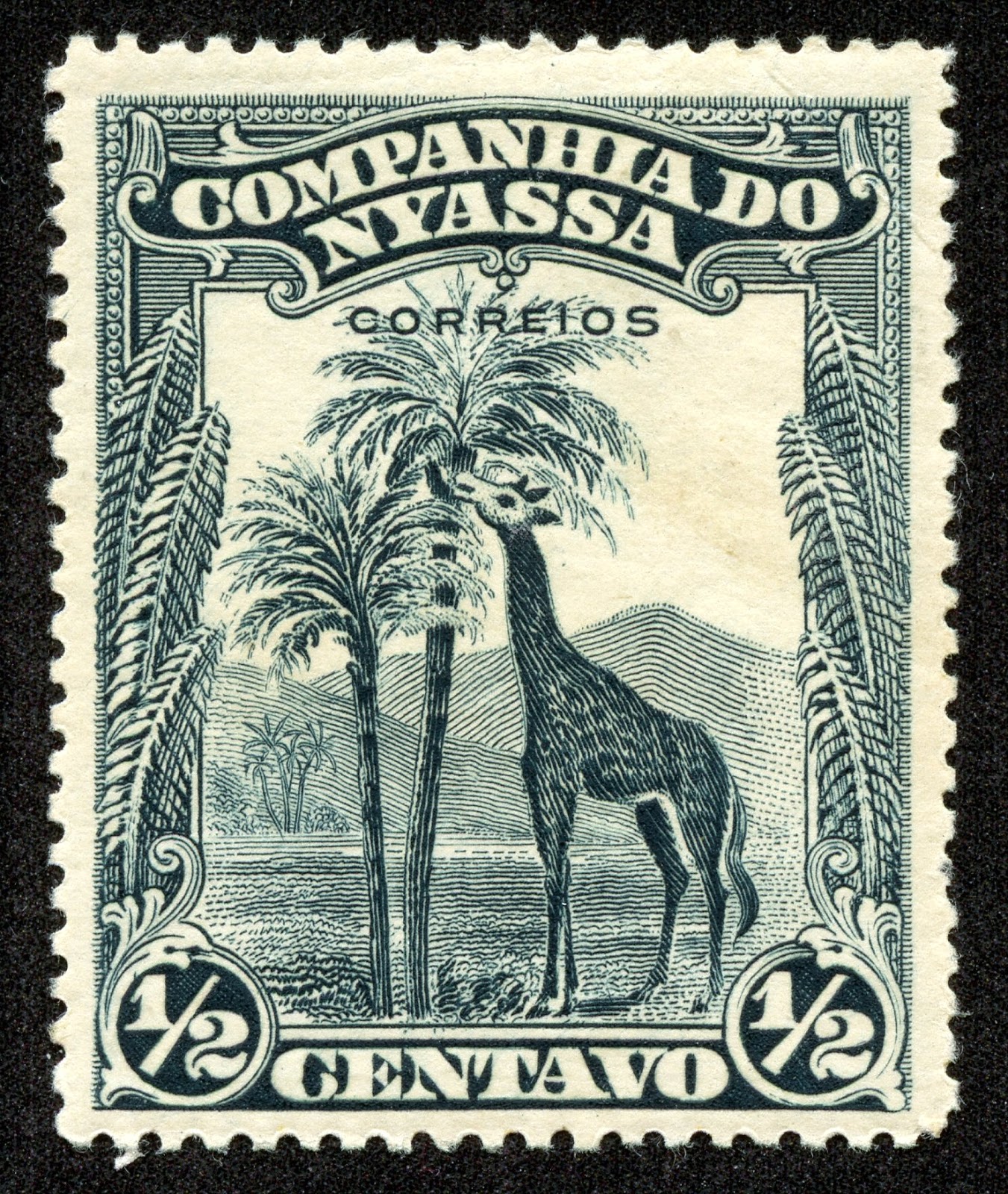 Observations....
* No stamps even get close to the $10 threshold for Nyassa in BB.
* Although one can argue that a 60% coverage is "generous" for a representational album, I did find 16 additional stamps with CV <$1-$1+ that are not in BB.
* The largest missing issue is the "Lisbon Surcharge" 1921 issue- some 12 stamps with CV @ 2+. That is because BB specifies the "London Surcharge" 1921 issue @ CV $1+. ! I would think BB owners would want to have a separate page for the "Lisbon Surcharge" issue stamps. 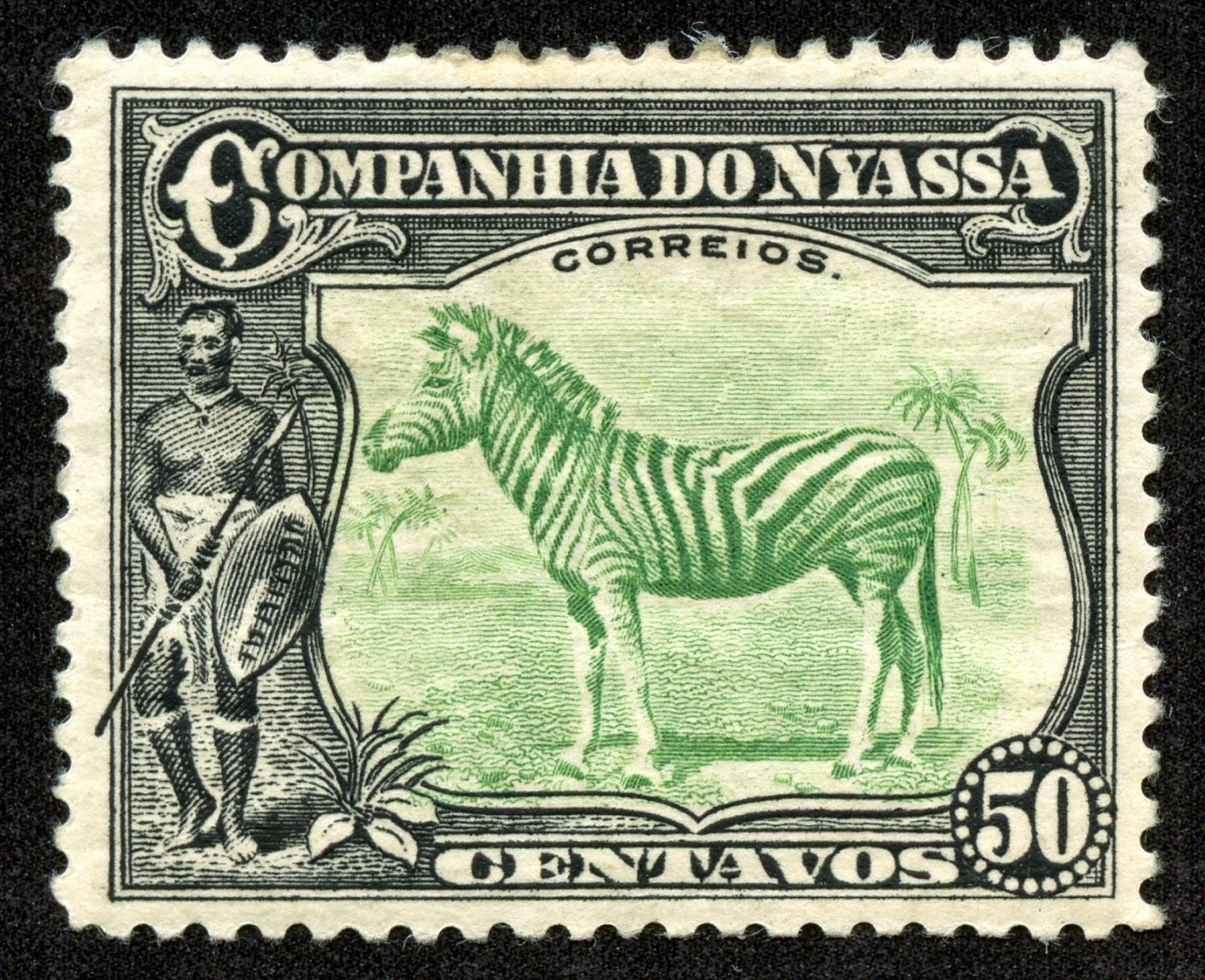 1921-23 Scott 122 50c black & green "Zebra & Warrior"
Out of the Blue
Let's face it. Nyassa Company was a miserable imperialistic organization that exploited the natives- very close to slave labor.