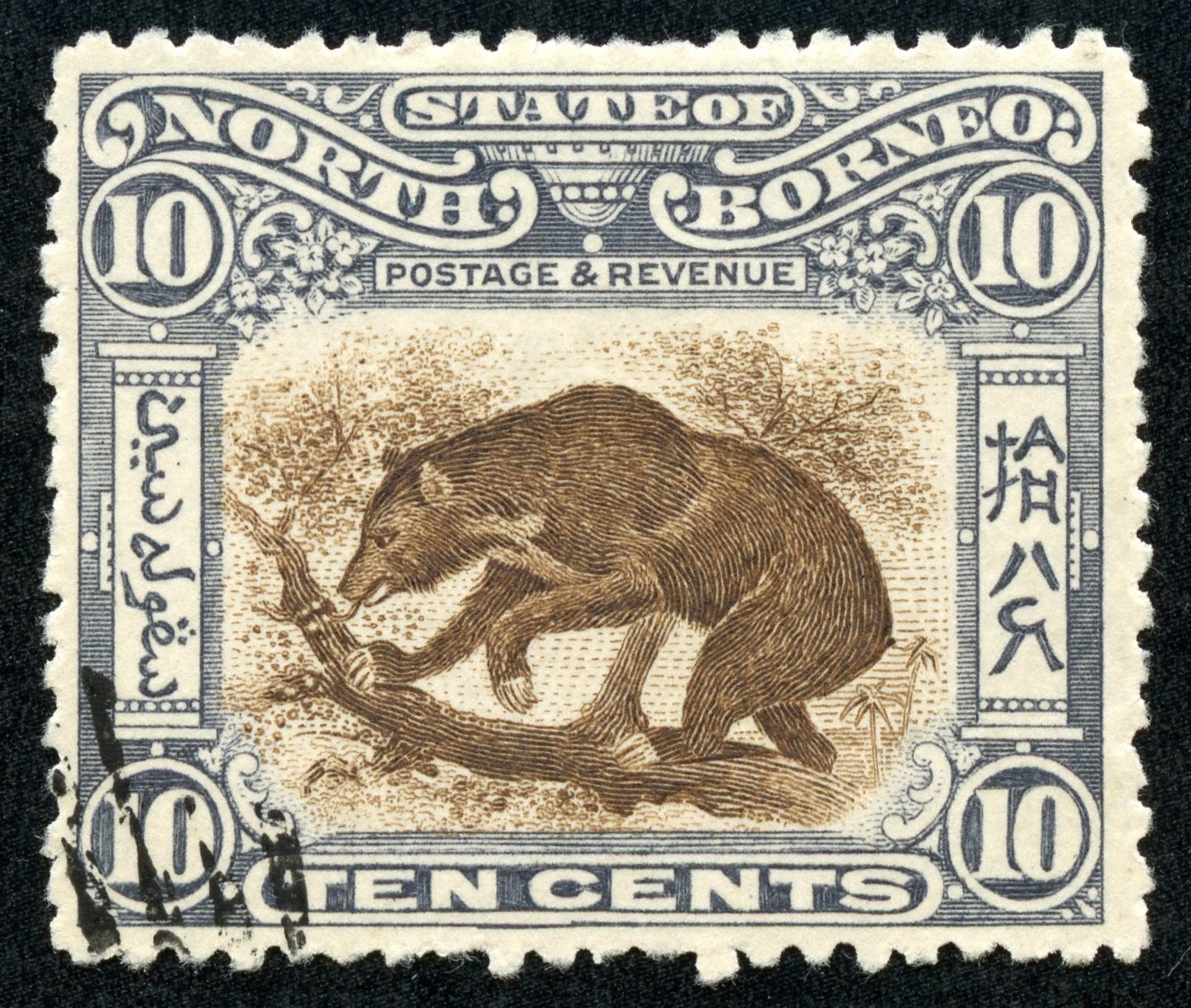 1902 Scott 120 10c slate & dark brown "Sun Bear"
Quick History
North Borneo, famous for the stunning stamp pictorials during the classical era, was located in the northeastern part of Borneo. The chief towns were Sandakan and Jesselton, and the population was 270,000 in 1931.

Having obtained sovereign and territorial rights in 1882 from the sultan of Brunei, the North Borneo Chartered Company administered the lands, while Great Britain, in 1888, controlled the defense and foreign relations as a "protectorate". The colony of Labuan was also placed under the administration of North Borneo from 1890-1905. 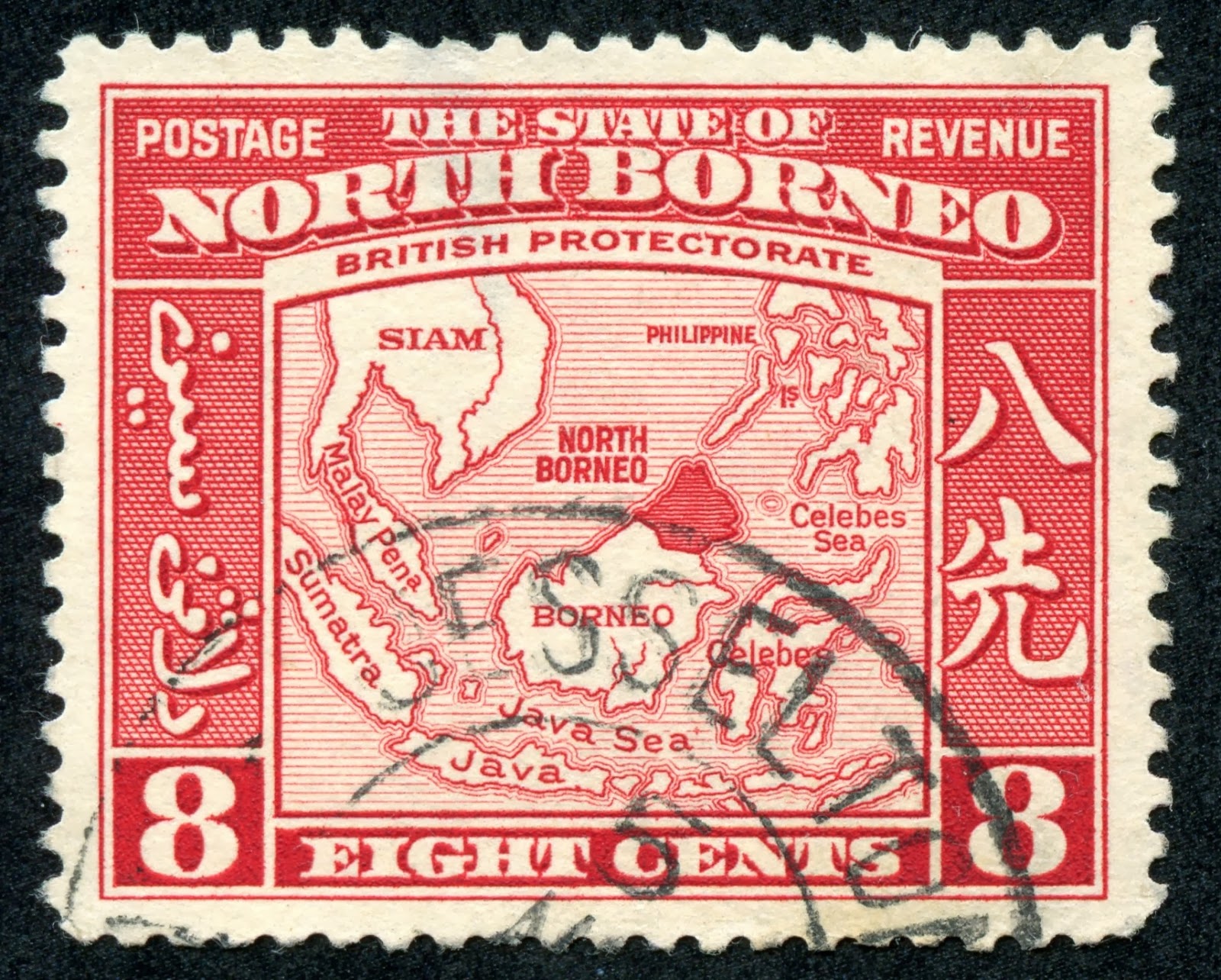 The State of North Borneo
1939 Scott 213 8c red
The North Borneo Chartered Company was in power until 1942, when Japanese forces occupied North Borneo. Liberated by the Australians in 1945, the territory became the Crown Colony of British North Borneo from 1946-1963. Granted self-government in 1963, the (now known as) State of Sabah united with Malaya, Sarawak, and Singapore to form the Federation of Malaysia. 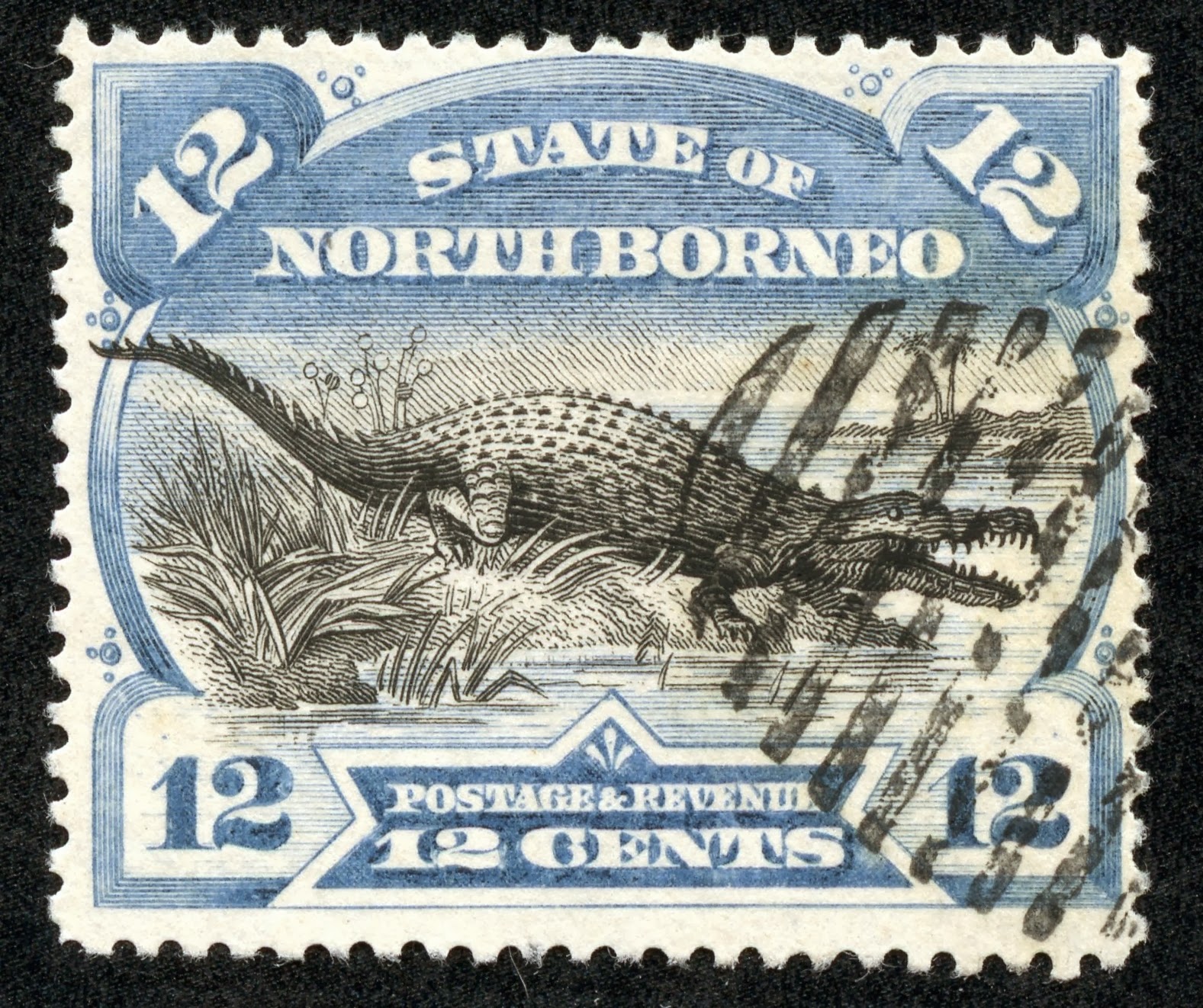 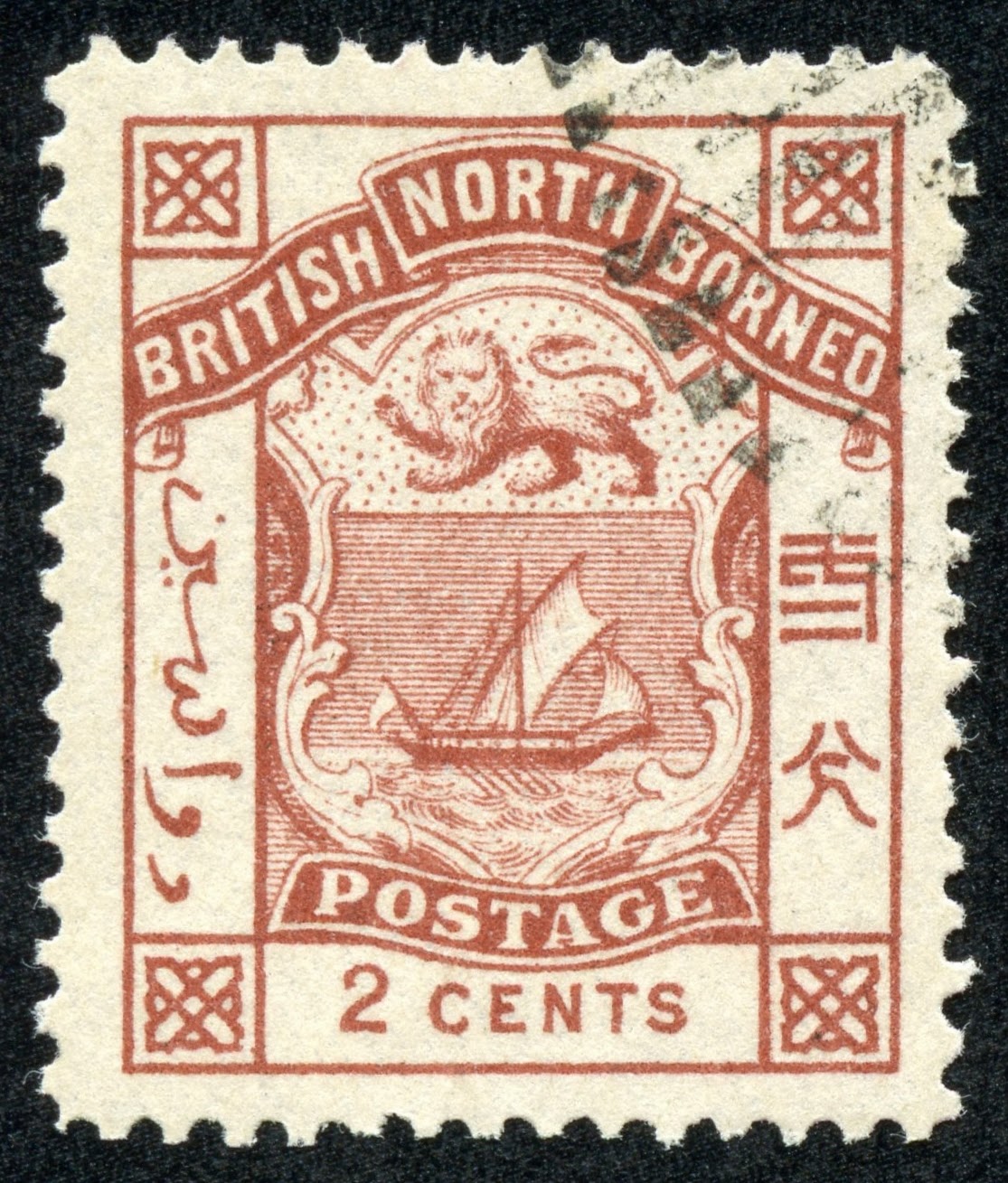 1886 Scott 27 2c brown, Perf 12
"Coat of Arms"
The British North Borneo Company administered Borneo under an 1881 charter, and "Coat of Arms" stamps were produced beginning in 1883. Initially "North Borneo" script was used, and these stamps are rather expensive.

But the 1886 "British North Borneo" and "Postage" script stamps are CV $3+- $10+ for the Perf 14 six stamp lower denominations. Shown here is the 2c brown. Note the CTO oval bars cancellation. 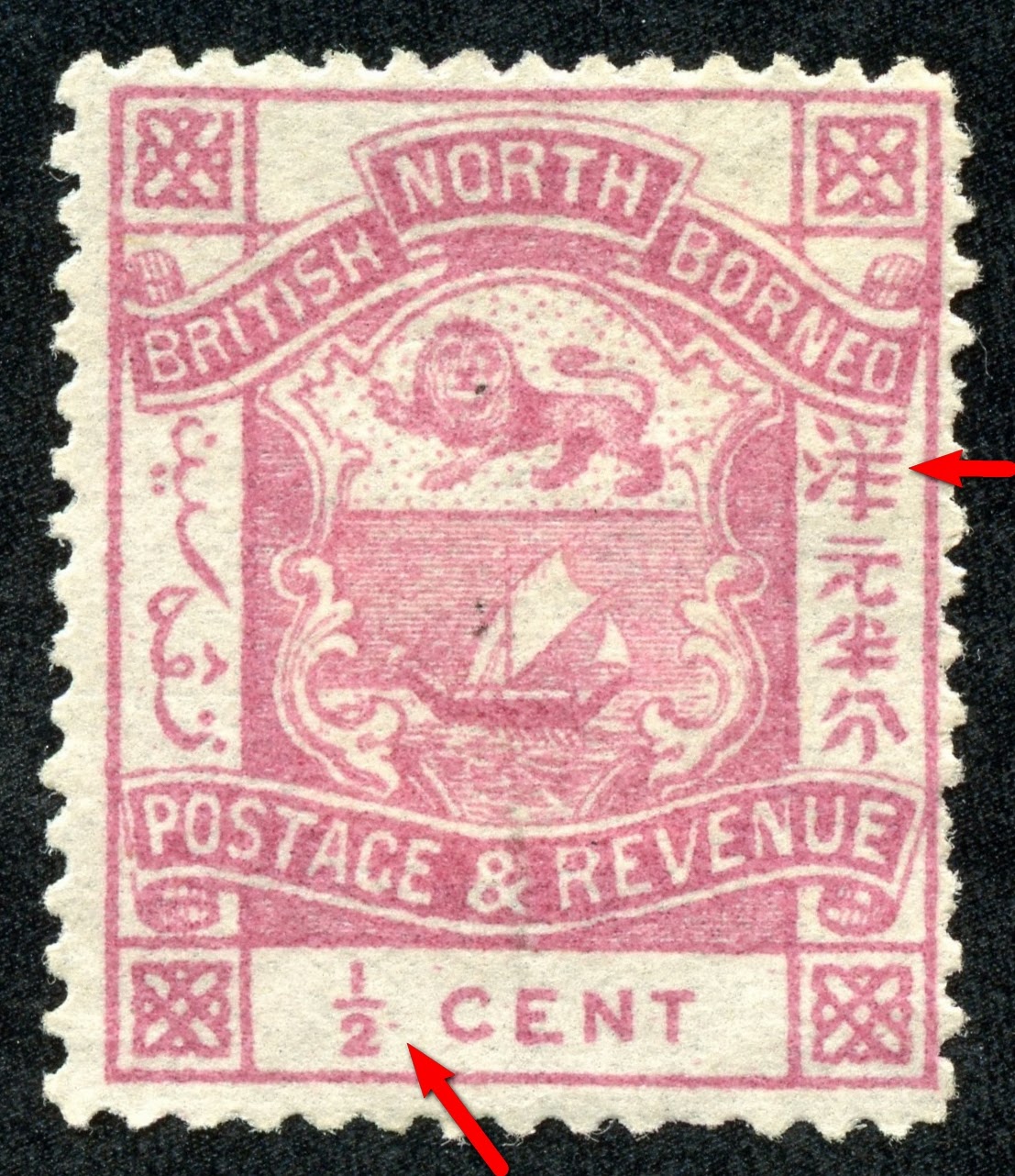 1887 Scott 35a 1/2 c magenta, Perf 14
Genuine
The 1887-92 Perf 14 nine stamp issue with "Postage & Revenue" script is quite inexpensive (CV <$1-$1). Unfortunately, several types of forgeries abound. Varro Tyler, in his book "Focus on Forgeries", illustrates a genuine 1/2c, which is shown here. Note the red arrows. One points to the upper right Chinese character, which is not connected at right. The other points out a faint dot between "1/2" and "cent". These are the signs of a genuine 1/2c rose stamp. 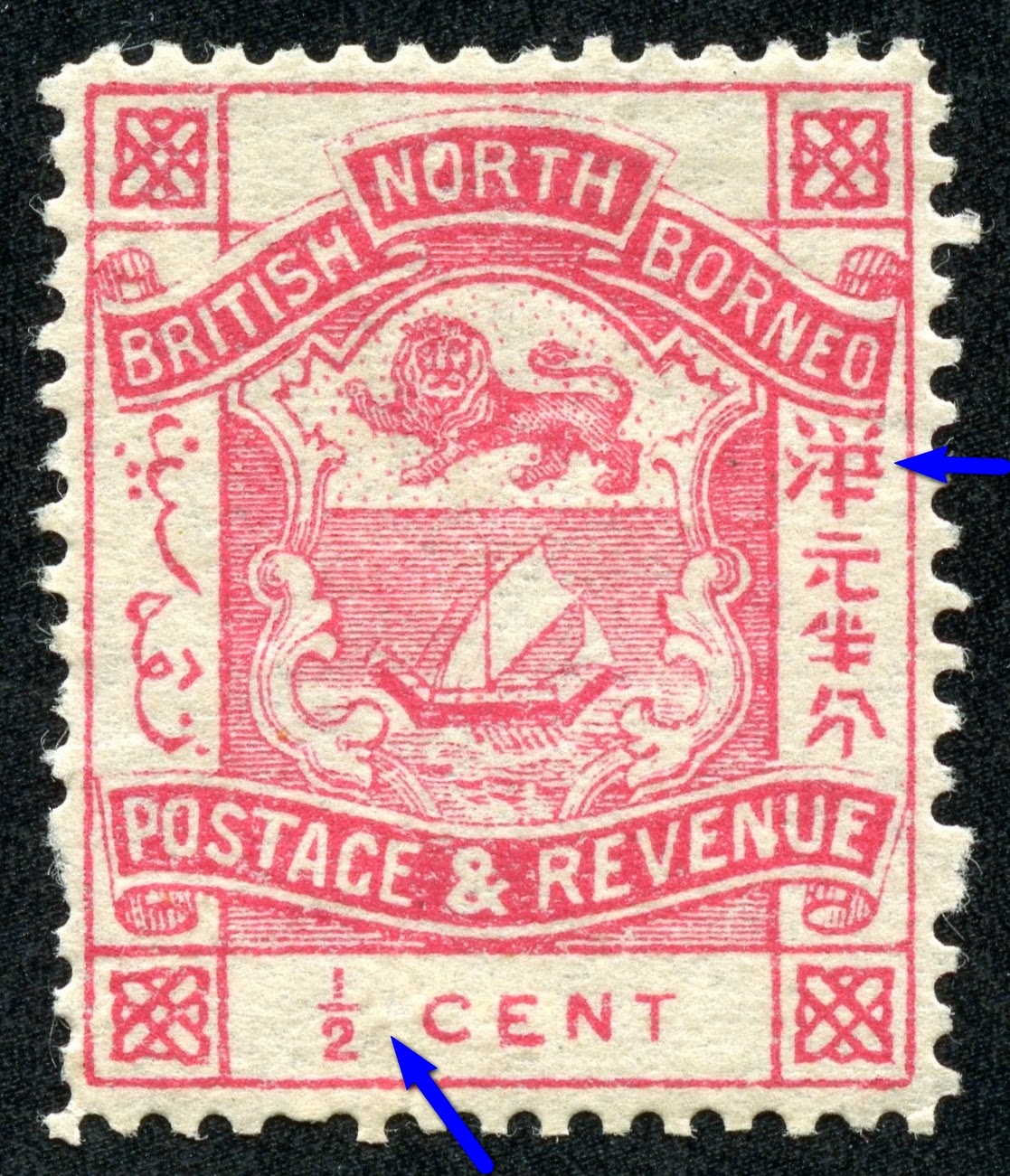 One type of forgery (Forgery A) in my collection is shown above. Note the 1/2c rose Chinese character is different. There is also no faint dot. The perf, though, here measures 14, as in the genuine. And the forgery overall is rather finely done. 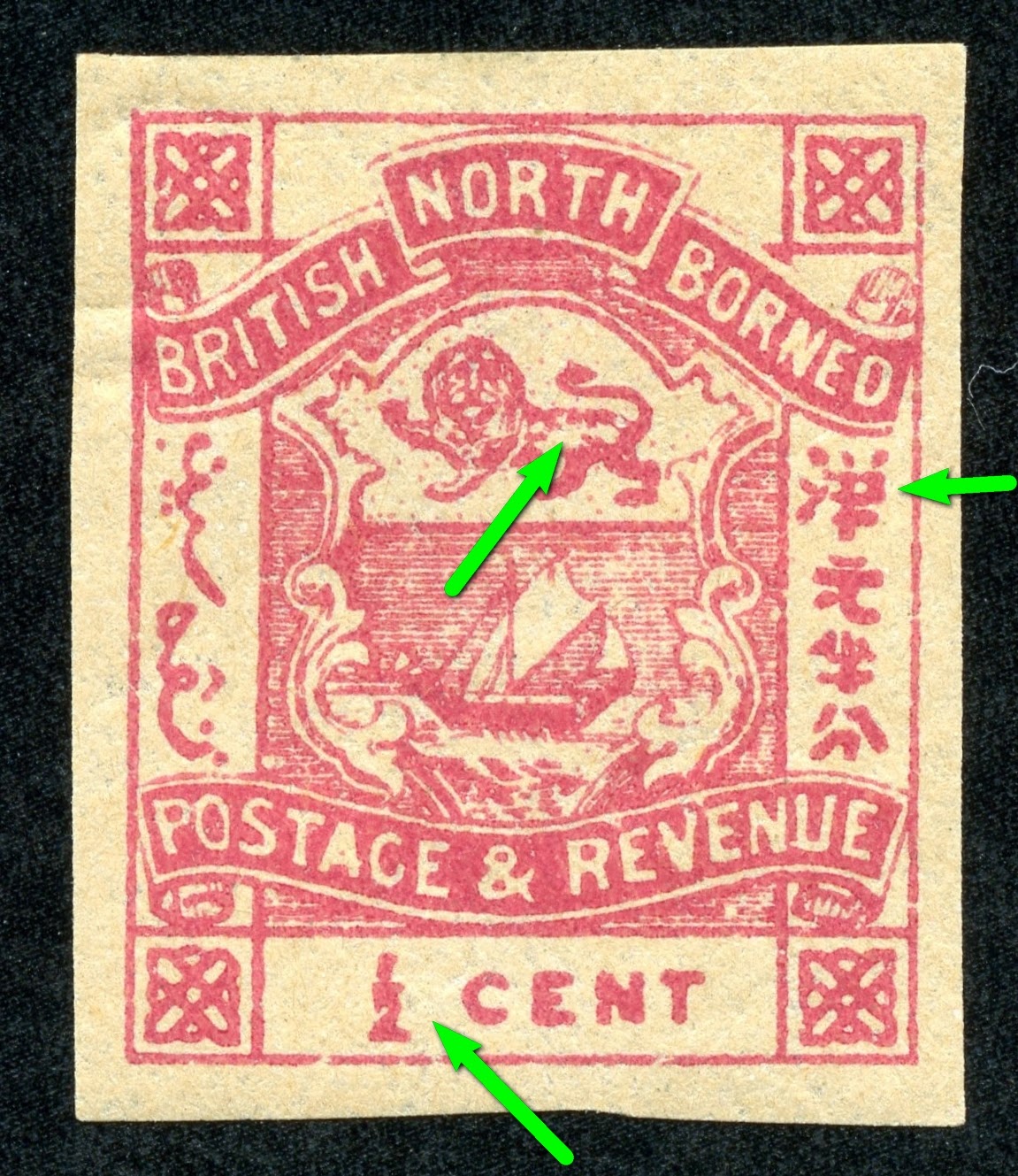 "1887 Scott 35 1/2c rose"
Forgery B
Another type (Forgery B), much cruder, is found both imperforate and perforate. The Lion's midsection is missing definition, as well as the "genuine" signs are missing. 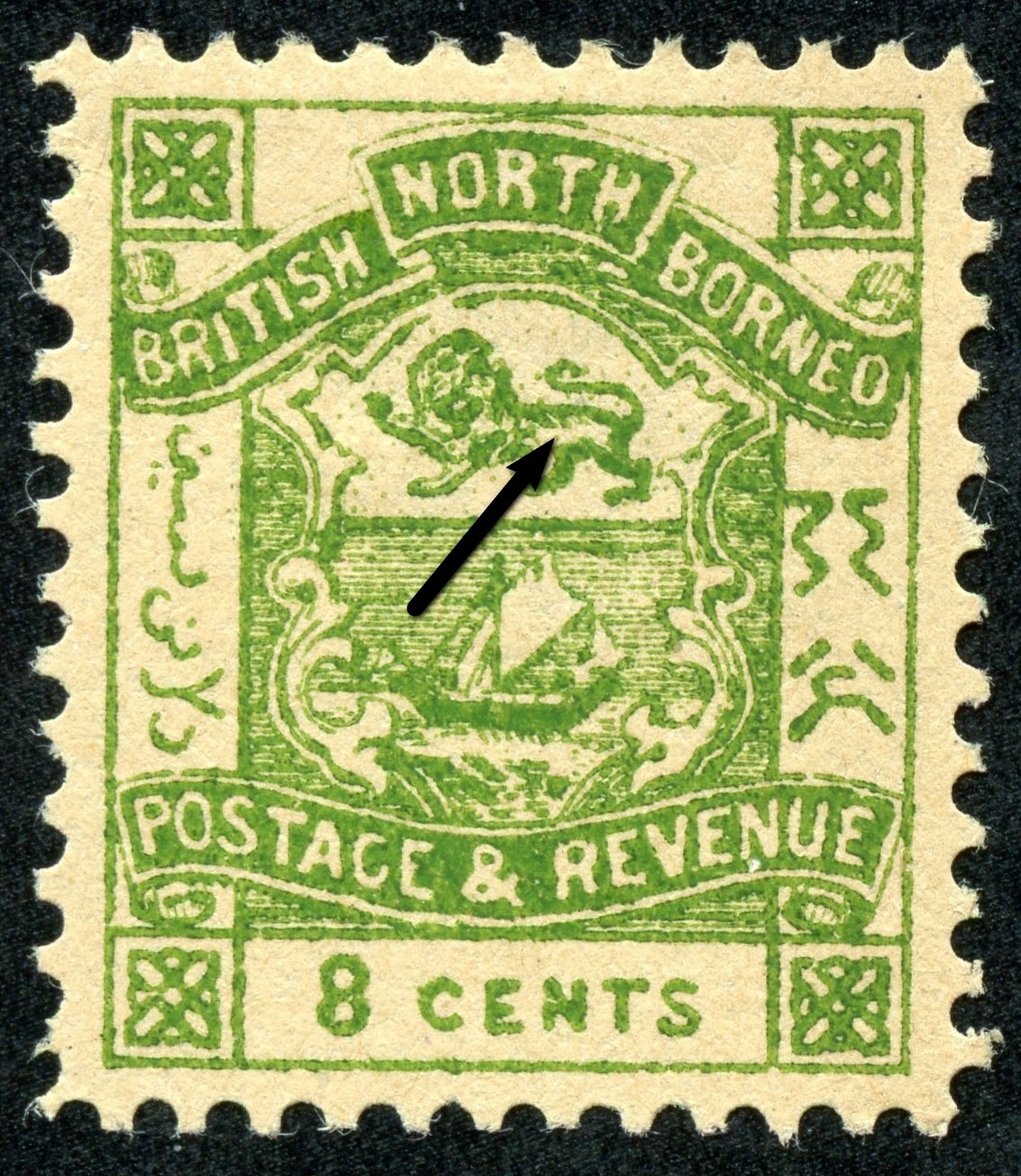 I have many examples of these forgeries in my collection (especially Forgery B in all denominations), and I suspect you might also. 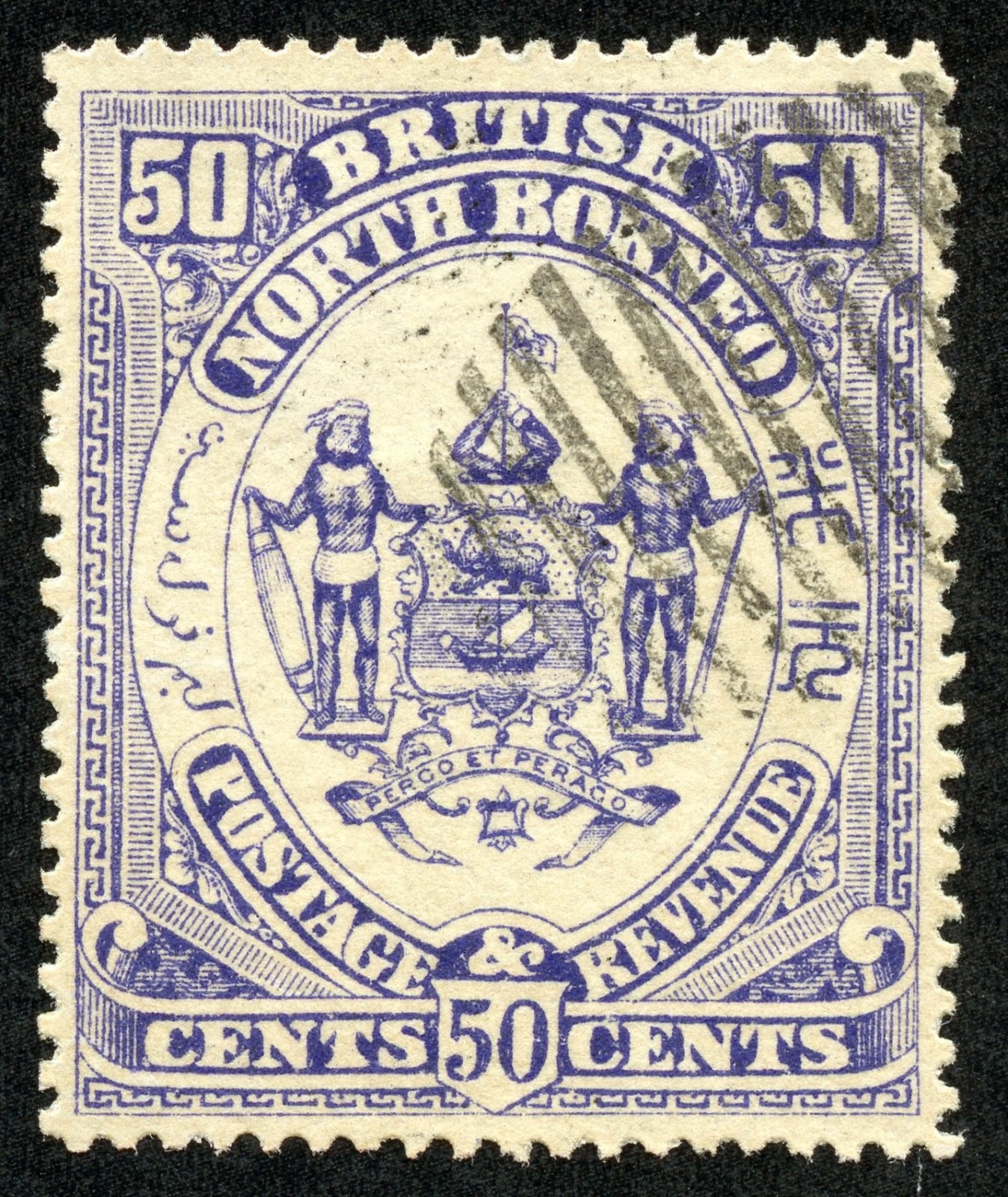 1888 Scott 45 50c violet
"Coat of Arms with Supporters"
In 1888, four of the higher denomination stamps from the 1886 issue were redrawn. Here, the club of the native on the left does not touch the frame.

You probably noticed by now the Arabic and Chinese script on the early stamps of North Borneo. 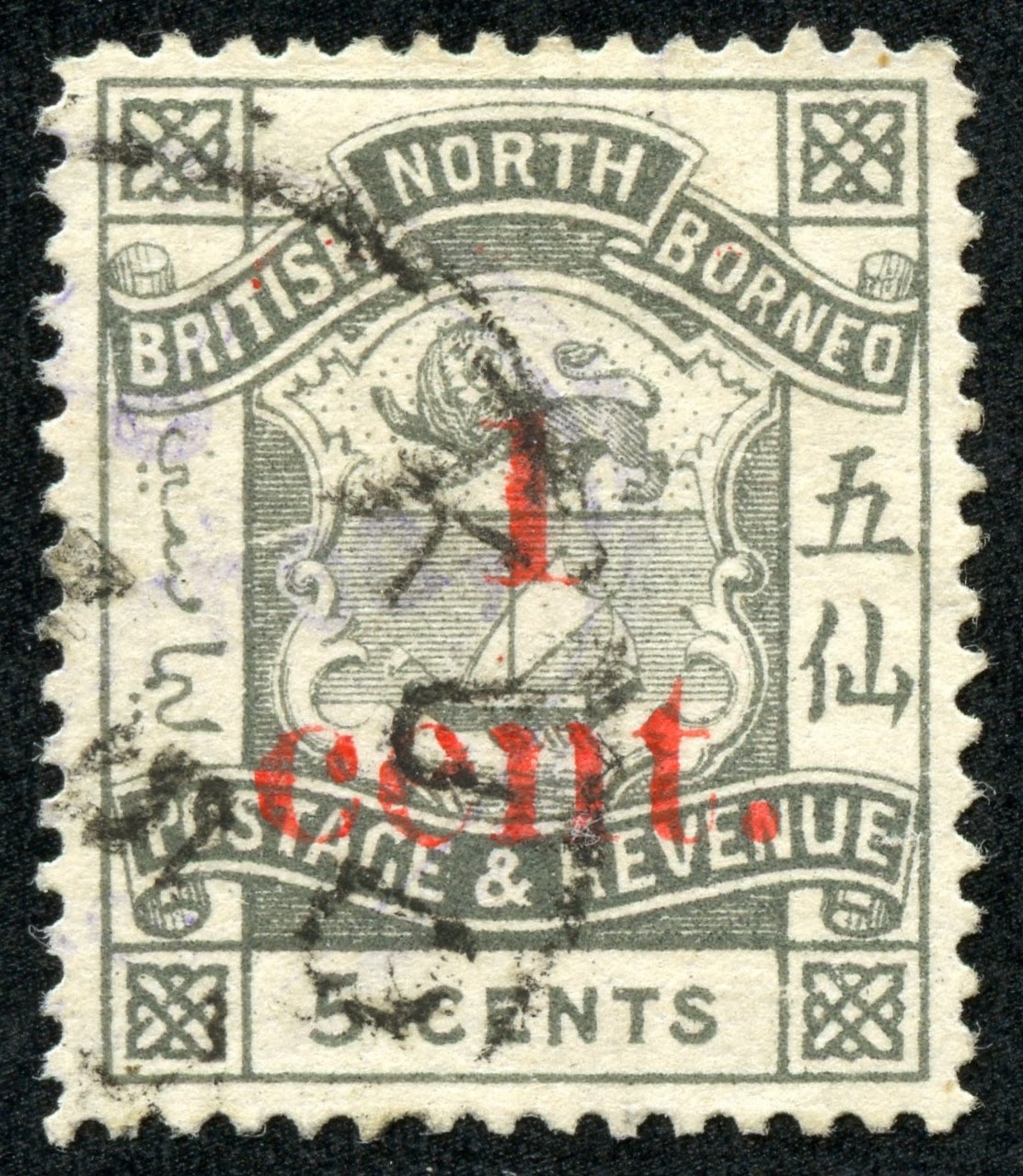 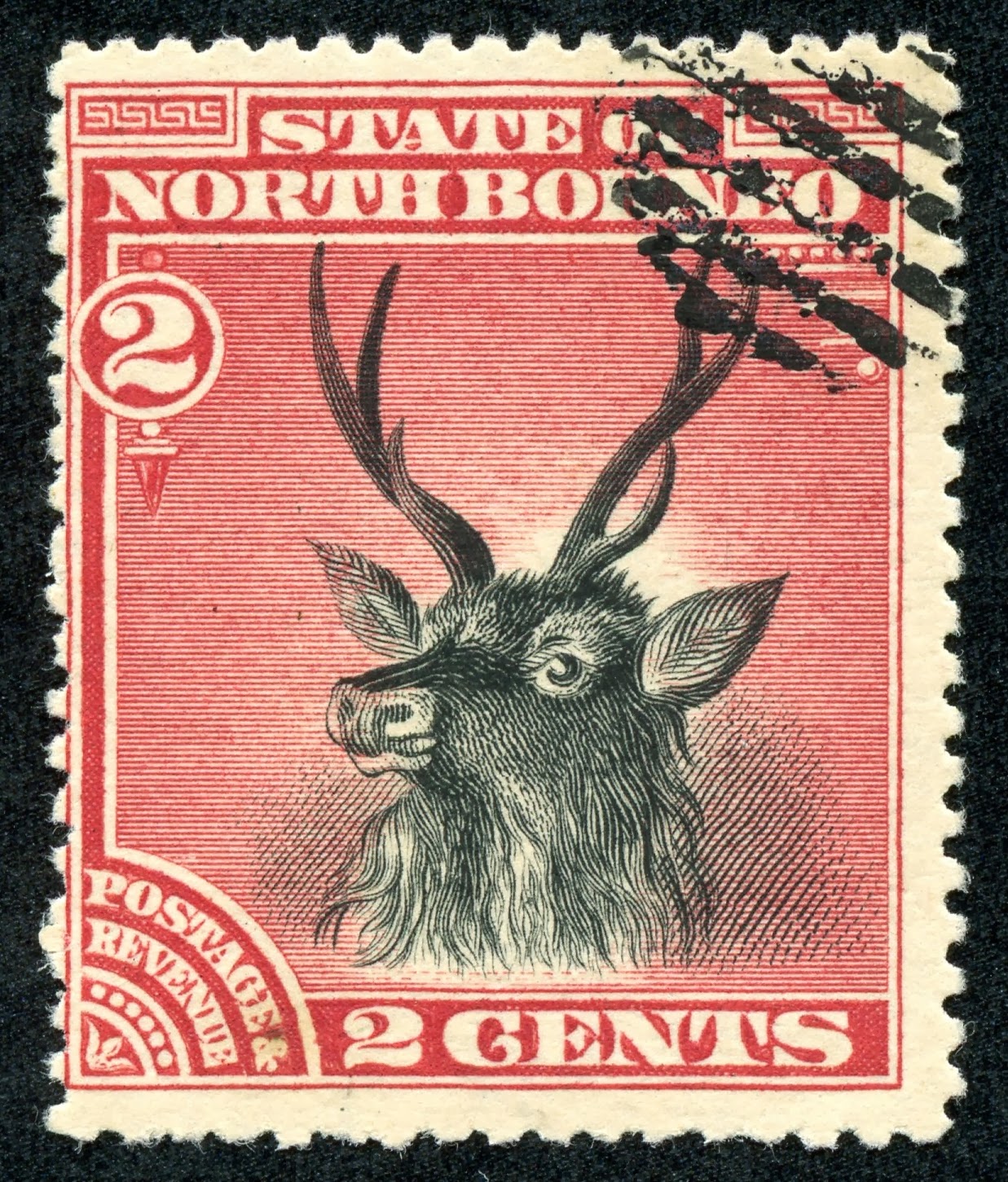 1894 Scott 60 2c rose & black "Malayan Sambar"
Beginning in 1894, the stamps of North Borneo began their fantastic issuance of colorful pictorials. The 1894 issue had 15 stamps, with 12 stamps CV <$1-$3. If the images seem familiar, they are. Labuan has similar stamps, except in different colors and overprinted.

Note the script has changed to the "State of North Borneo". 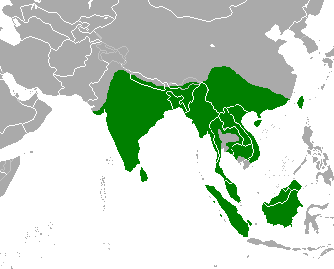 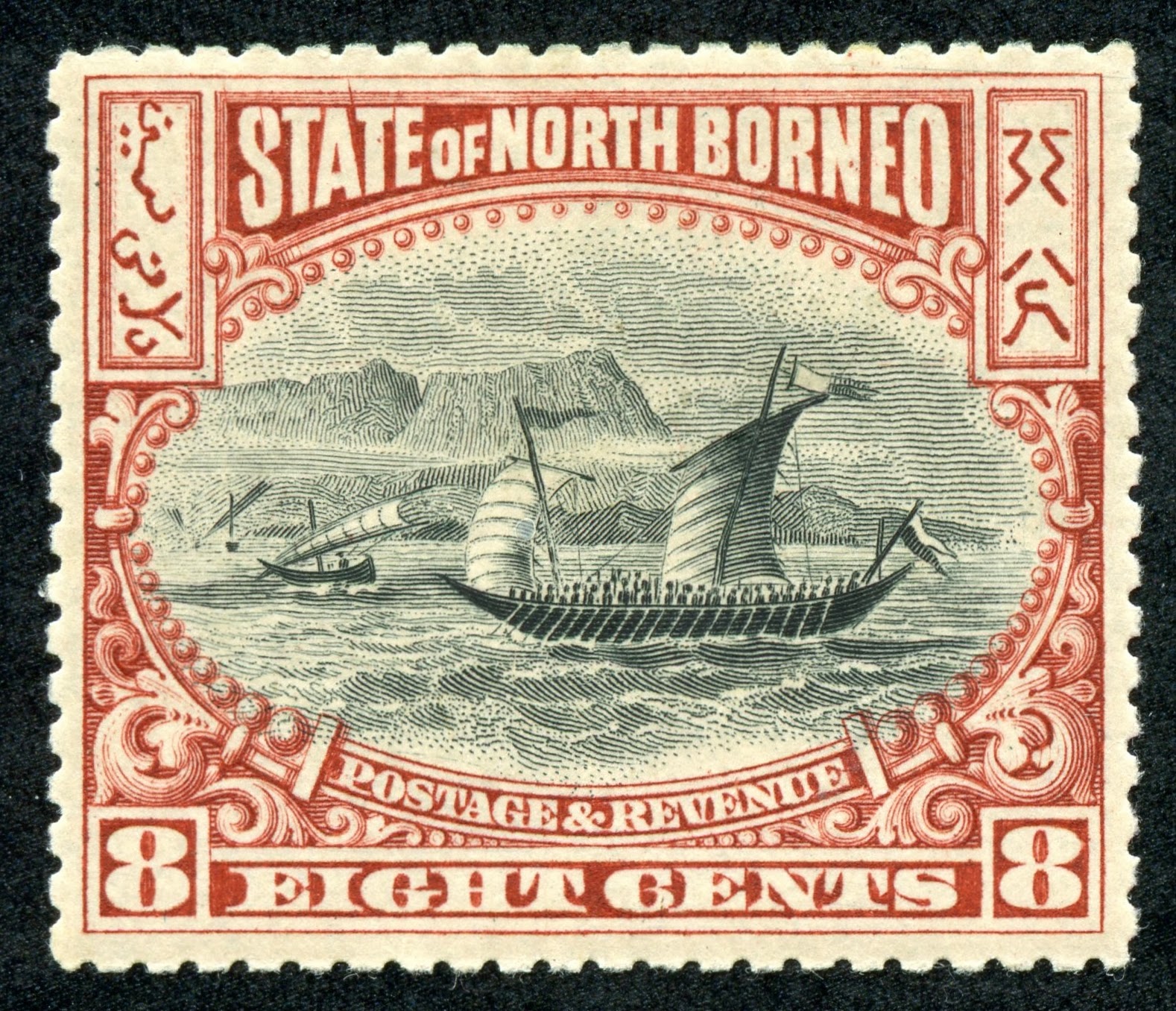 Reality check: North Borneo between 1894 and 1904 issued over sixty stamps. John Apfelbaum states in his blog that there was a literate population of only several hundred in the country at the time. I don't think I need to point out the obvious reason they did this. 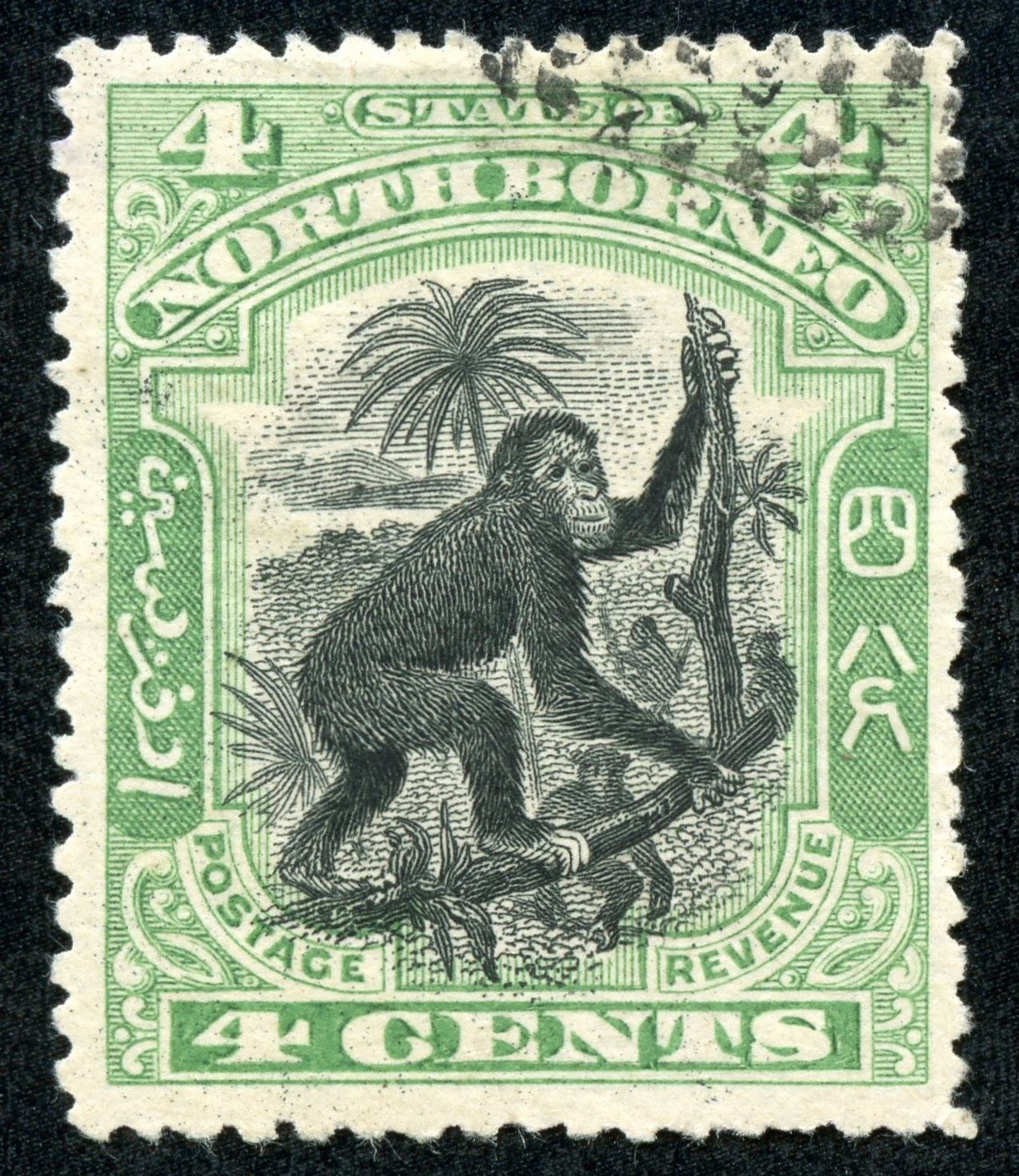 1899 Scott 103 4c green & black "Orangutan"
In 1899 and 1900, two stamps (green & black, deep rose & black) respectively were issued with an image of an orangutan. They are native to the region, and are still found in the rainforests of Borneo. 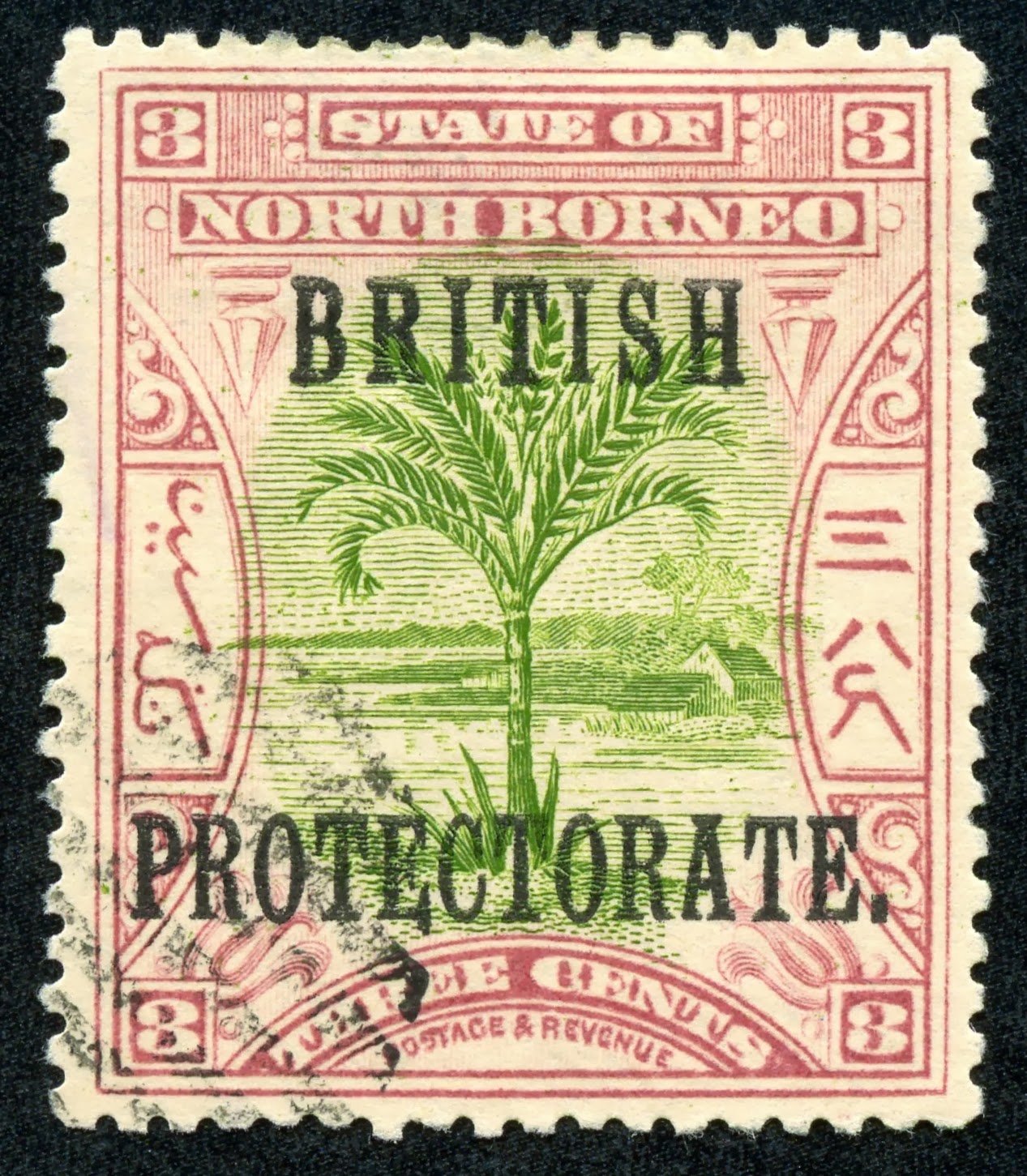 The Sago Palm provides a starch, a sago flour used in puddings and noodles. 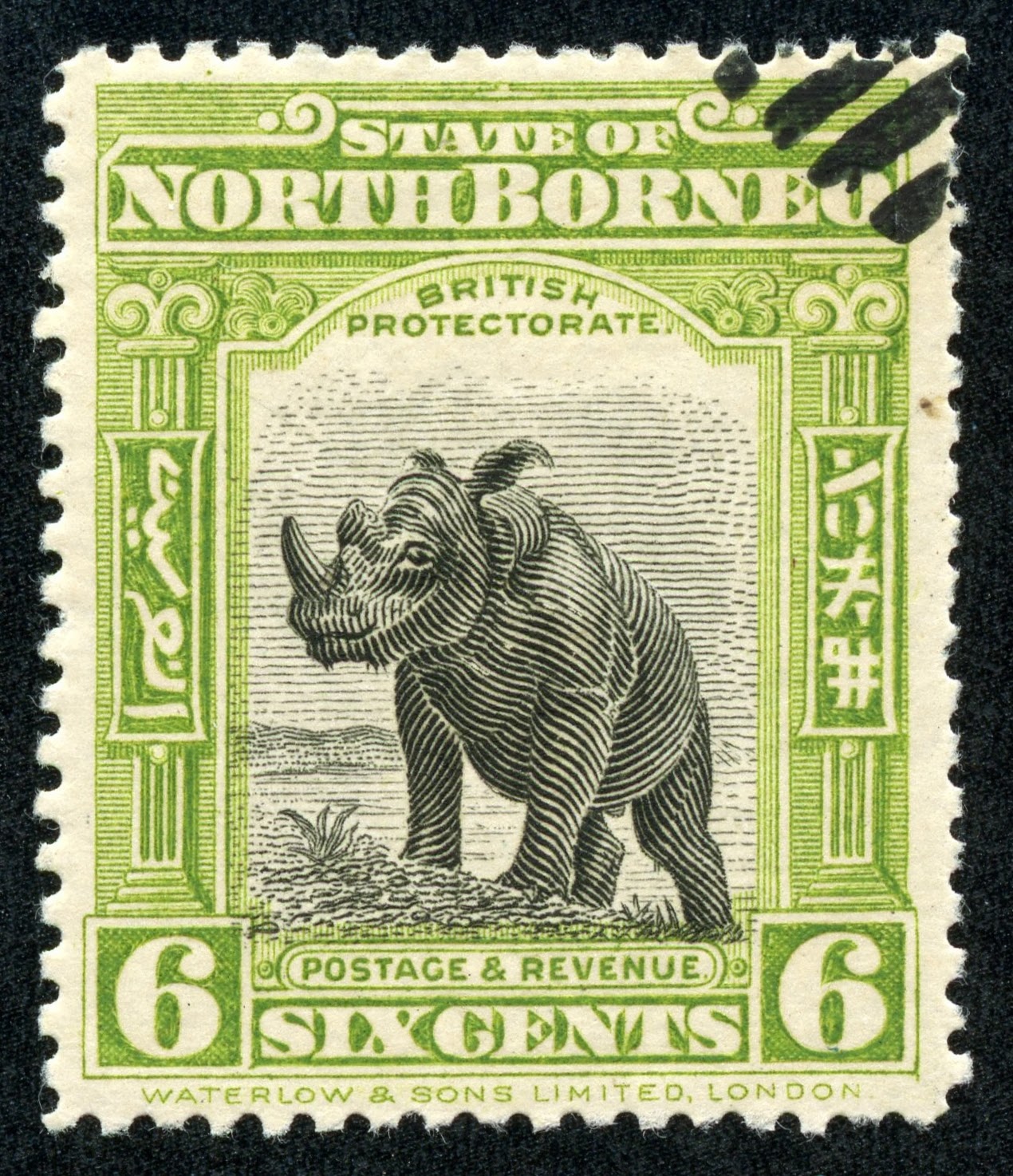 The Sumatran Rhinoceros is one of five species of Rhinoceros, and it's status today is "critically endangered". There may be only 200 animals left on the planet. They are poached for their horns. 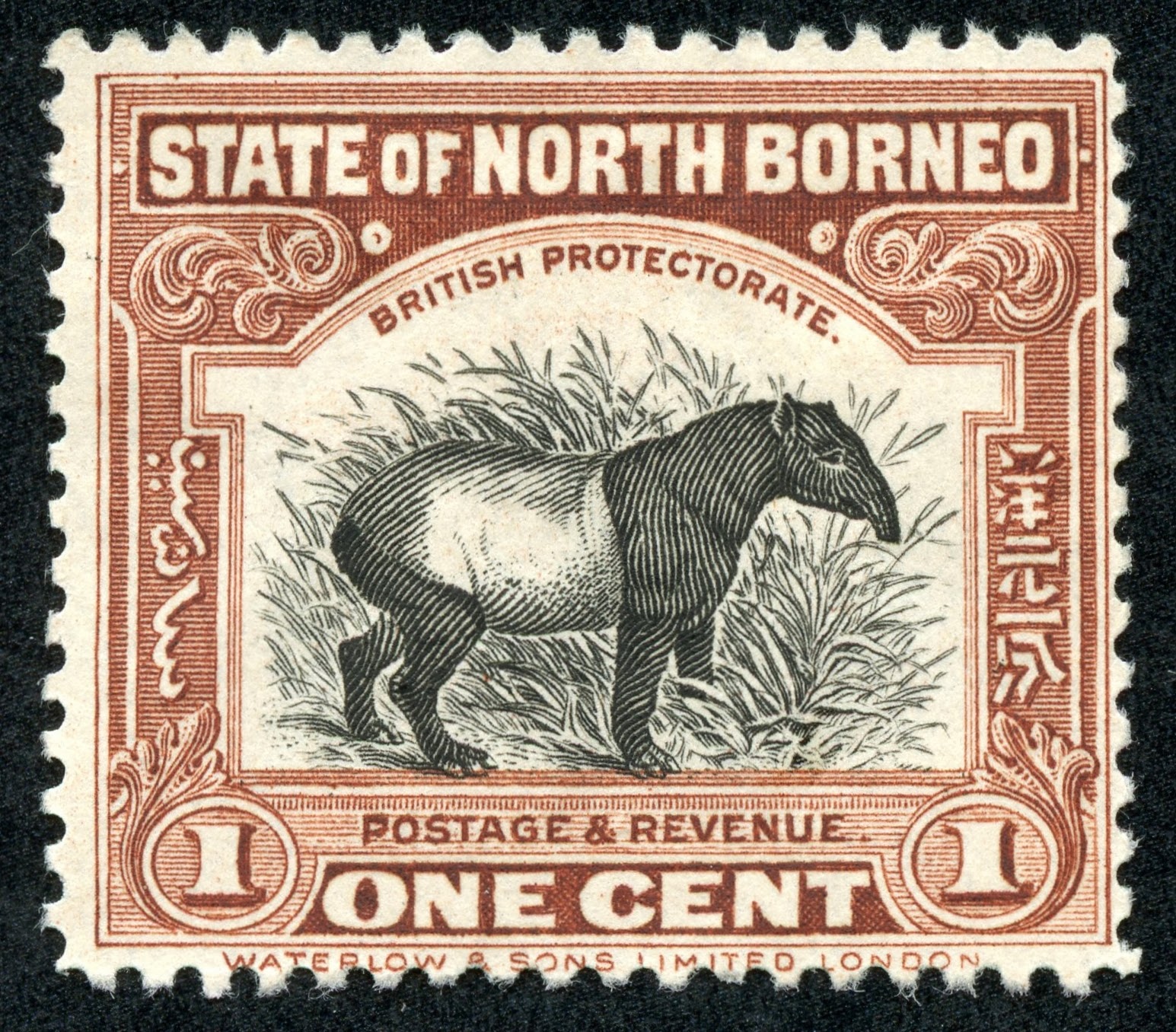 The Malayan Tapir eats vegetation exclusively, is mostly nocturnal, yet has poor eyesight. 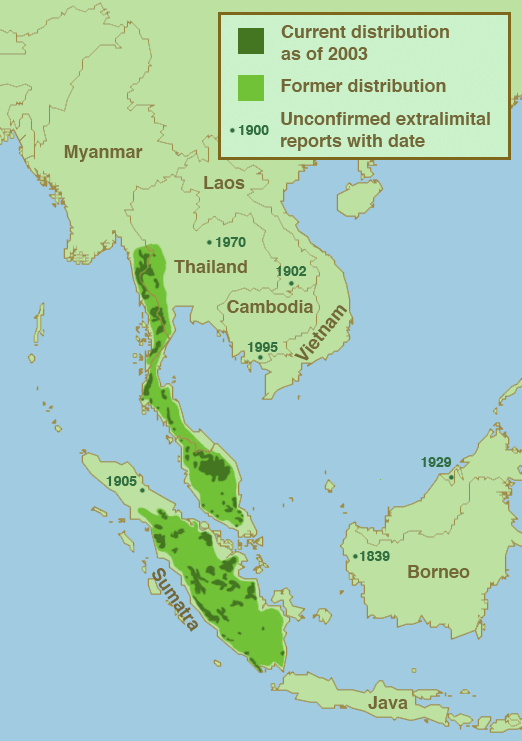 Distribution of Malayan Tapir
Although Tapirs were reported in North Borneo (1929), today they inhabit Sumatra and the Malay Peninsula. 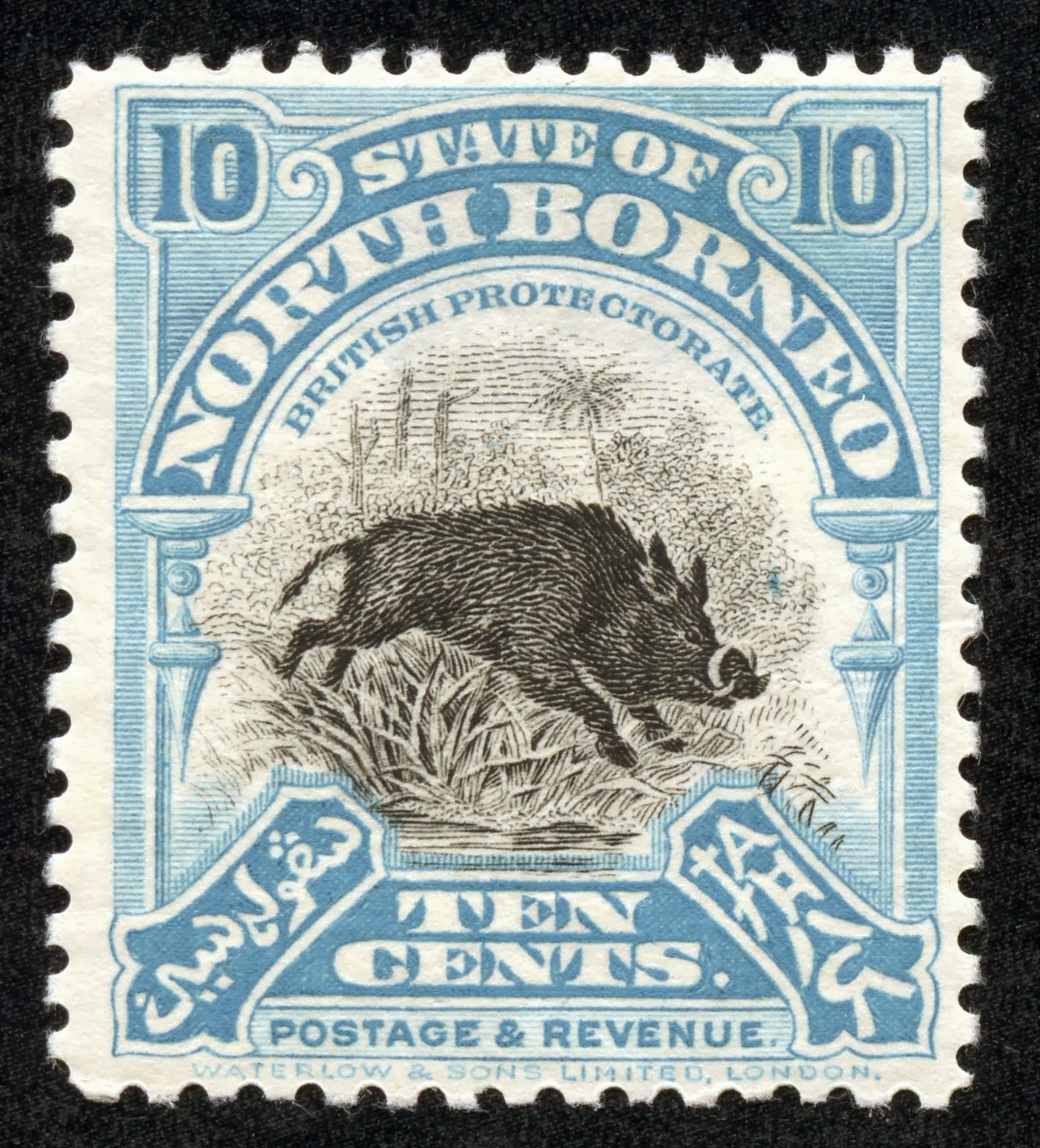 Historical Wild Boar Range (green)
One will note it has been introduced (blue) into Australia and the United States. It appears, based on the map, that the "Wild Boar" actually was not found in North Borneo. ;-) 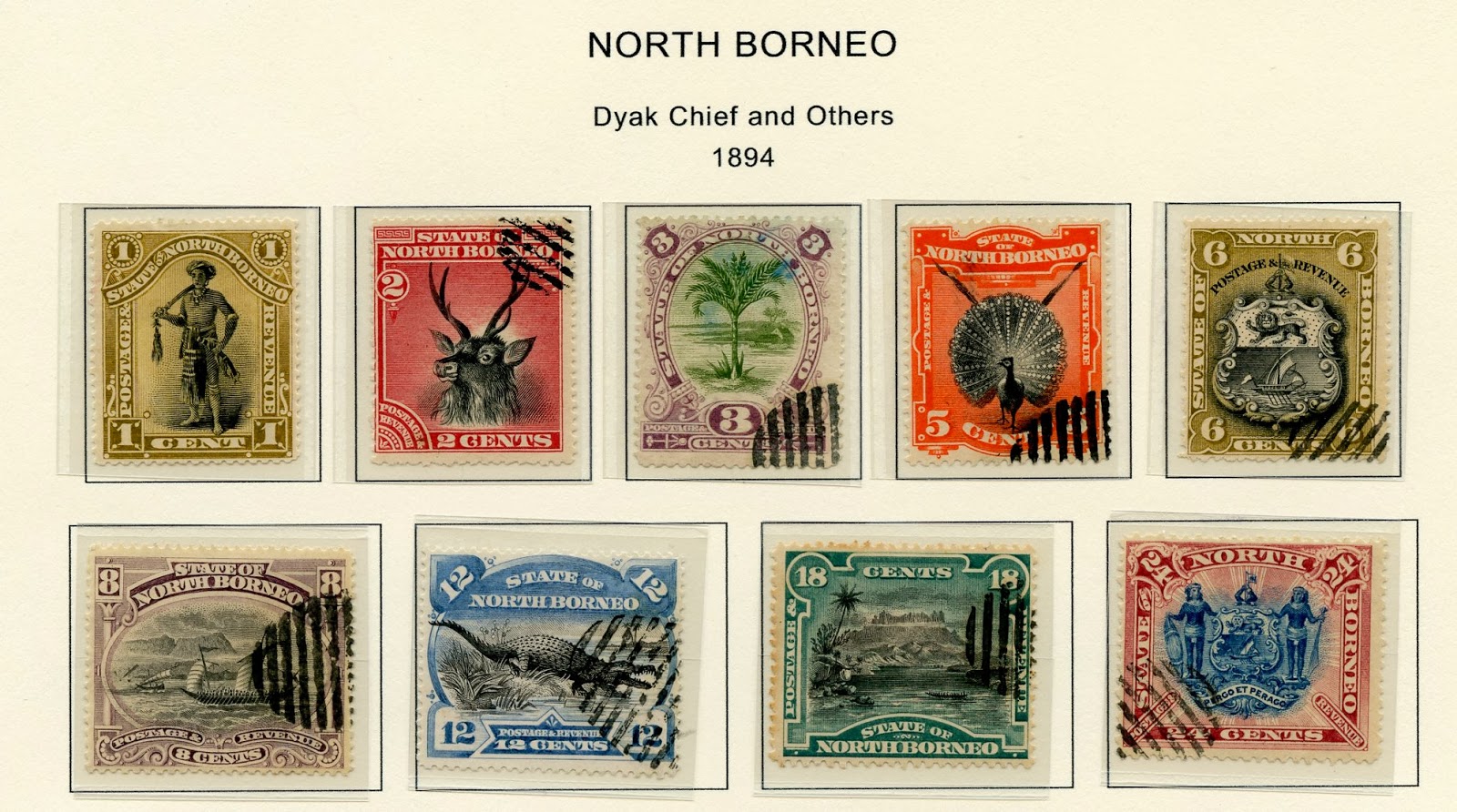 1894 issue in Deep Blue
Deep Blue (Steiner) has 26 pages for North Borneo, and has spaces for all the major numbers. The "classical" Steiner North Borneo pages though, do not have the Japanese occupation issues. One will need to go to the general  Steiner "World" pages to retrieve them. Since I do not have any of the occupation stamps, it is a moot point for me. 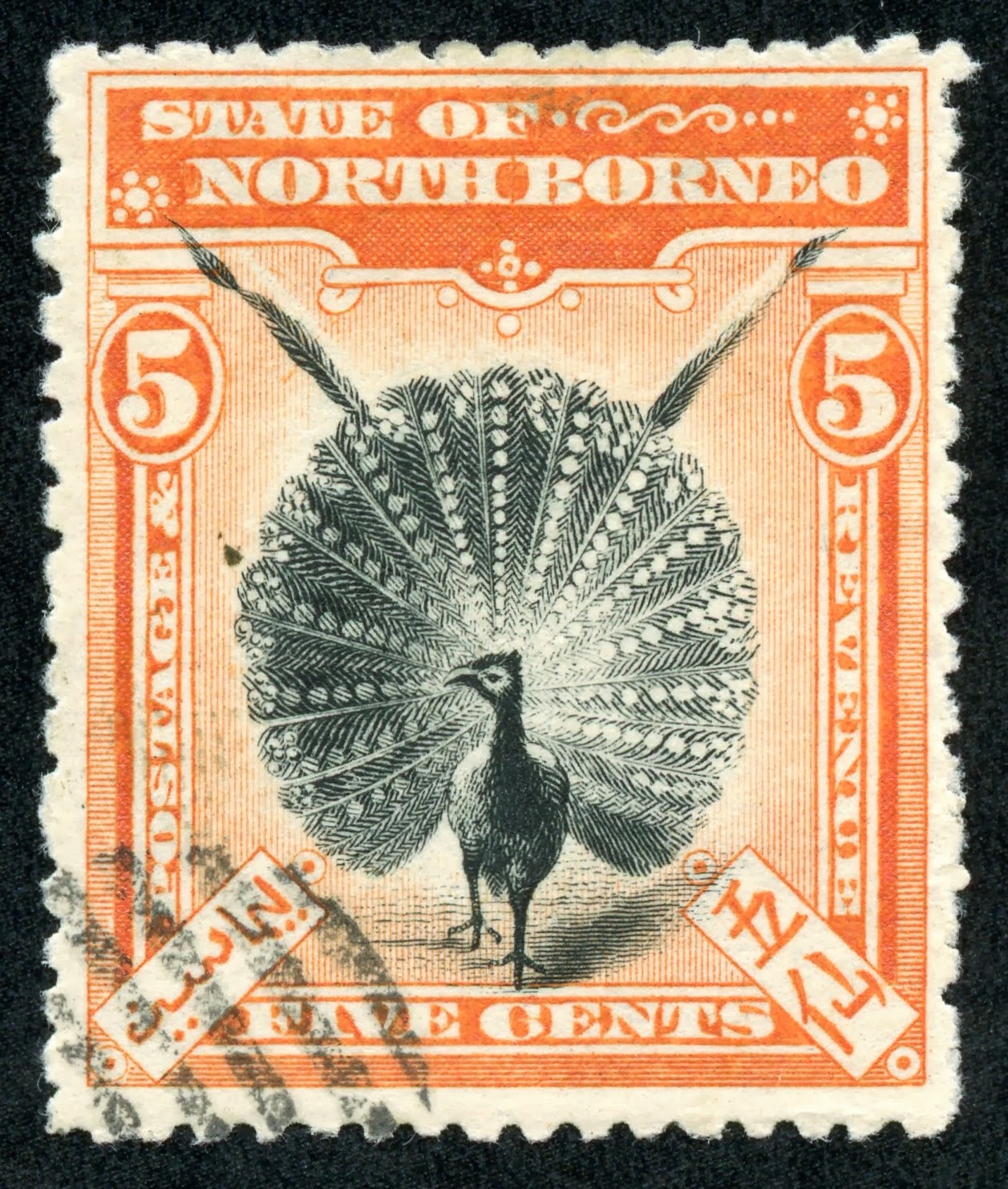 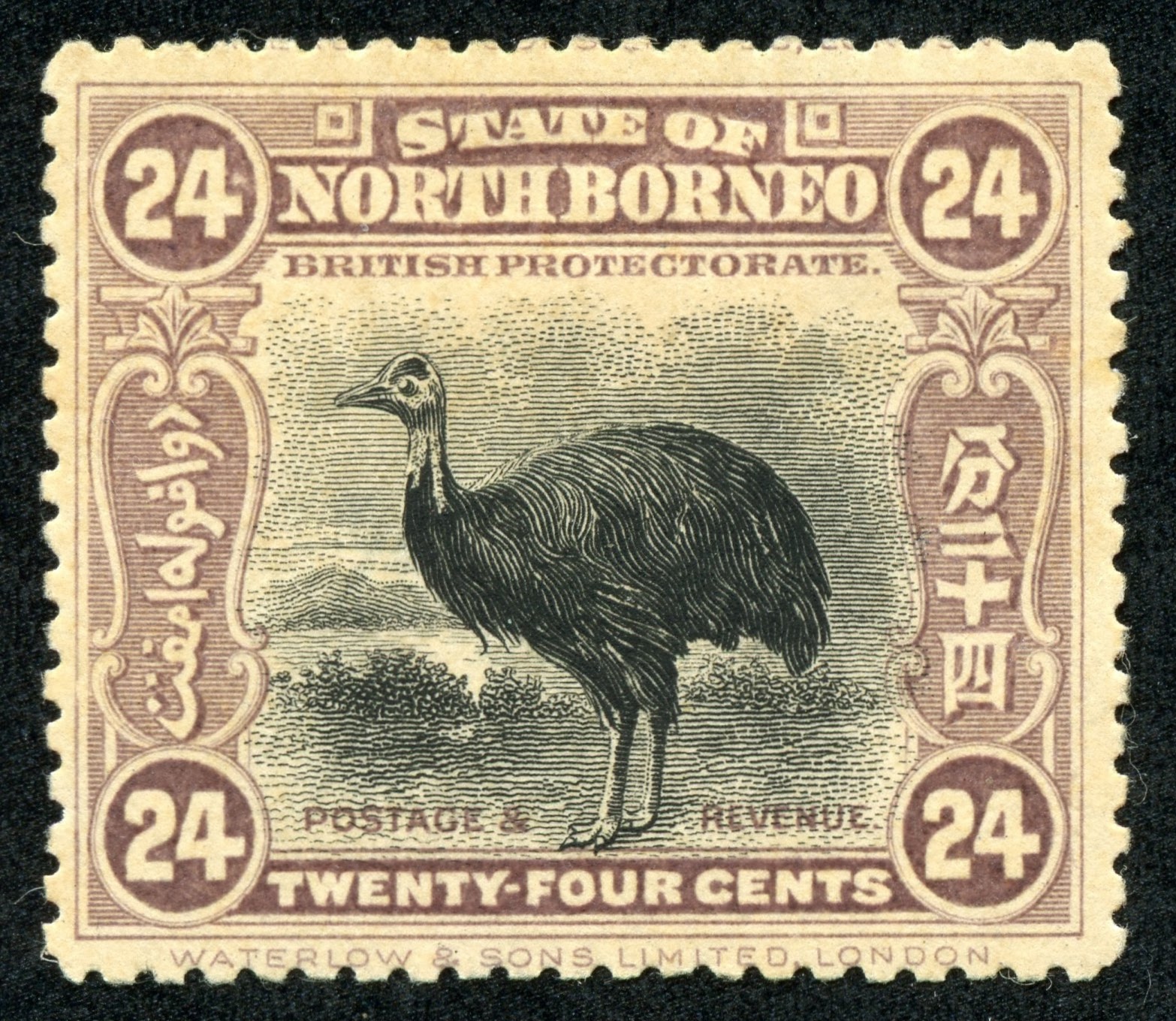 1909 Scott 149 24c violet "Cassowary"
Out of the Blue
North Borneo stamps have been popular with stamp collectors since they were issued.

Who am I to argue?

Comments appreciated
Posted by Jim at 9:58 AM