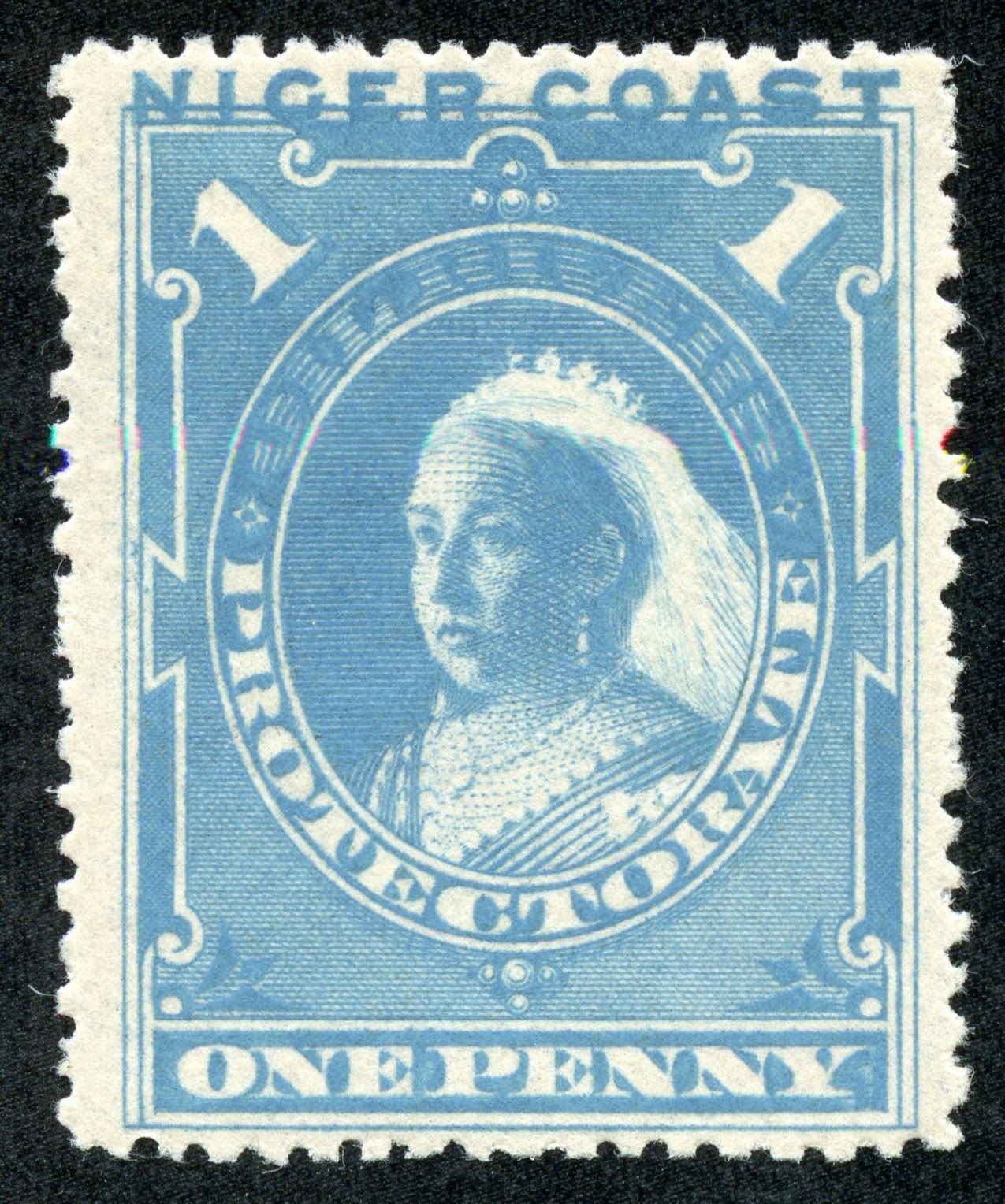 1893 Scott 38 1p light blue "Queen Victoria"
Quick History
The delta of the Niger River (in present day Nigeria) was initially called "Oil Rivers", not because the area was a producer of "black gold", but, because at the time, the delta was a large producer of palm oil. (Ironically, the area did become a large oil producing region in the 1950s.) The delta came under British rule in 1885, the "Oil Rivers Protectorate". This was done to control trade on the Niger River, and to prevent encroachment by other Europeans during the "Scramble for Africa".

In 1893, the territory was expanded, sweeping from Calabar towards Lokoja up the Niger River, headquarters of the chartered Royal Niger Company. Consequently, the name changed to the "Niger Coast Protectorate". 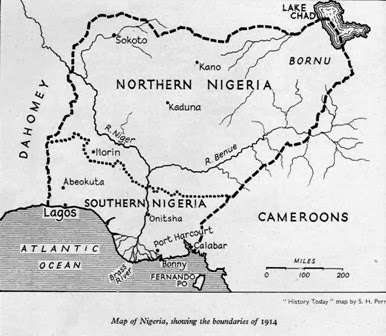 
Although not horribly confusing, the frequent change in British protectorates for the British Nigeria region deserves a transition chart for clarification. And one has been done by Michael at his great Dead Countries Stamps website- check it out! 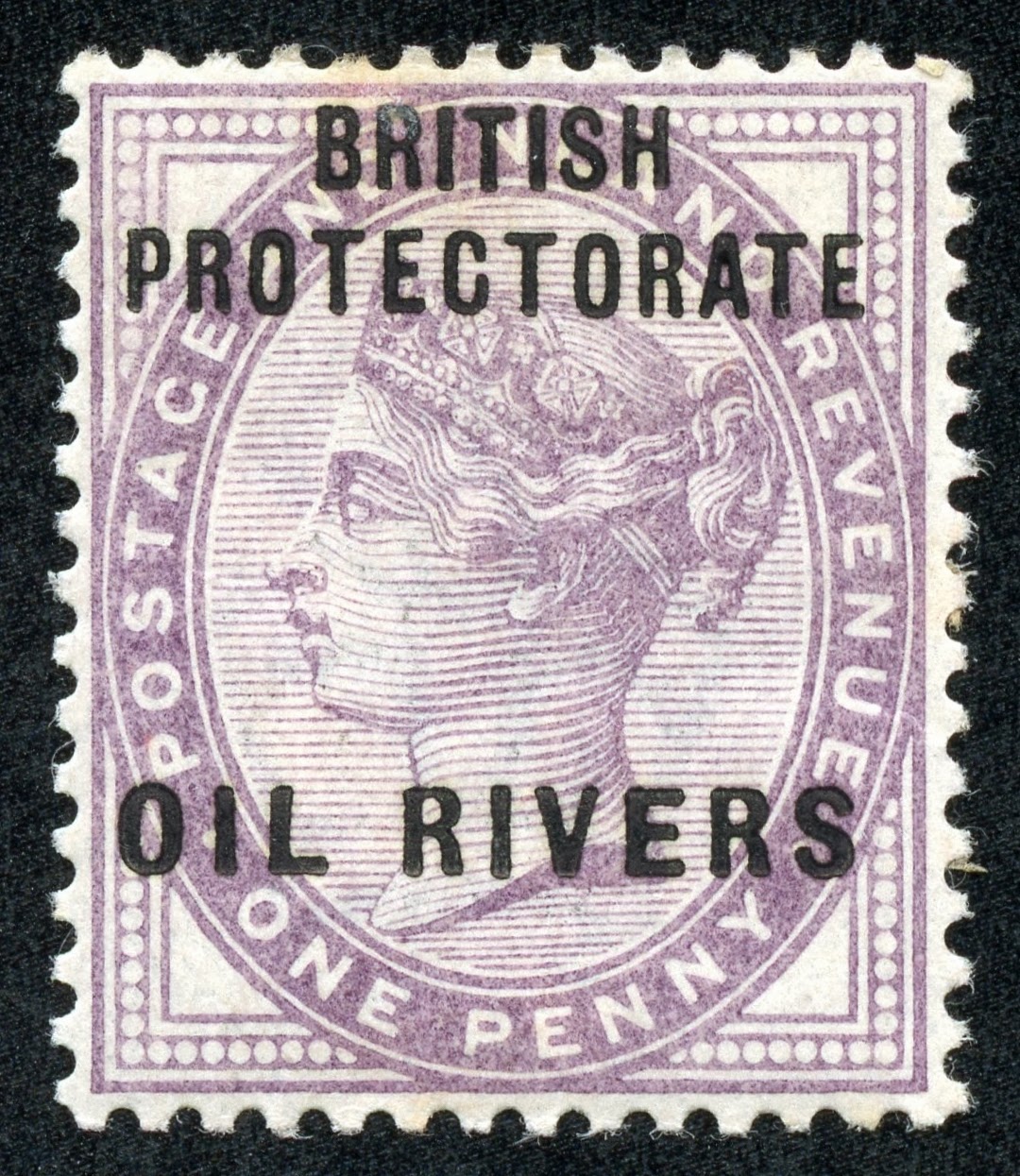 The handstamped surcharges of 1893 (31 stamps) and the the 1894 bisects and whole stamps surcharged (6 stamps) are CV $ hundreds- $ thousands, and out of the league of readers of this blog. ( I think ;-) Besides, Scott has a note about dangerous forgeries of all surcharges.

But the 1893-1898 Queen Victoria stamps particularly ( 21 stamps) are quite lovely, in my opinion, and definitely worth a look. 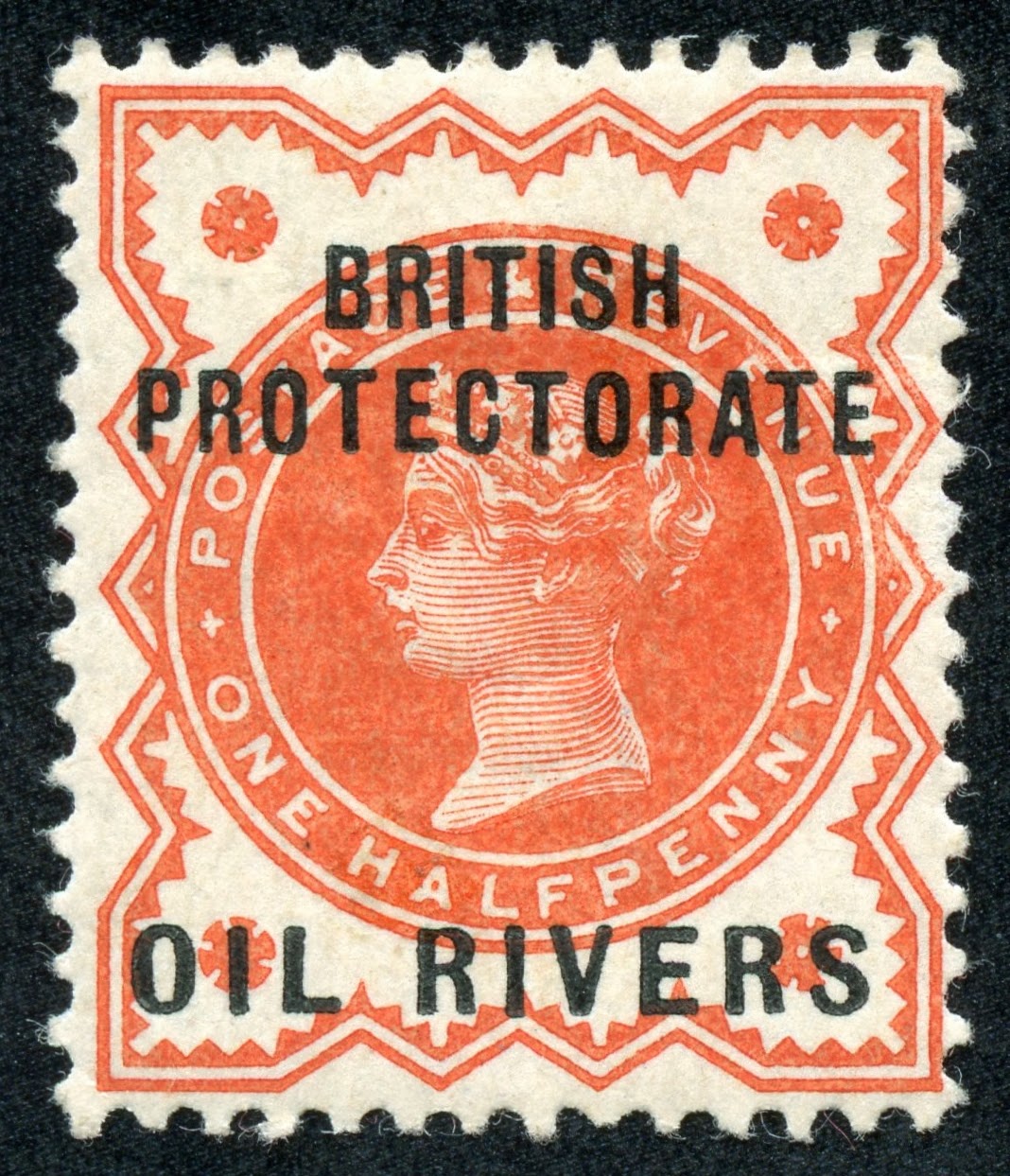 This 1/2p must have been in short supply, because in 1893 there are some 23 examples of 1/2p surcharges using the higher denomination stamps of this issue. These surcharged stamps, though, are only for those with a thick wallet. ;-) 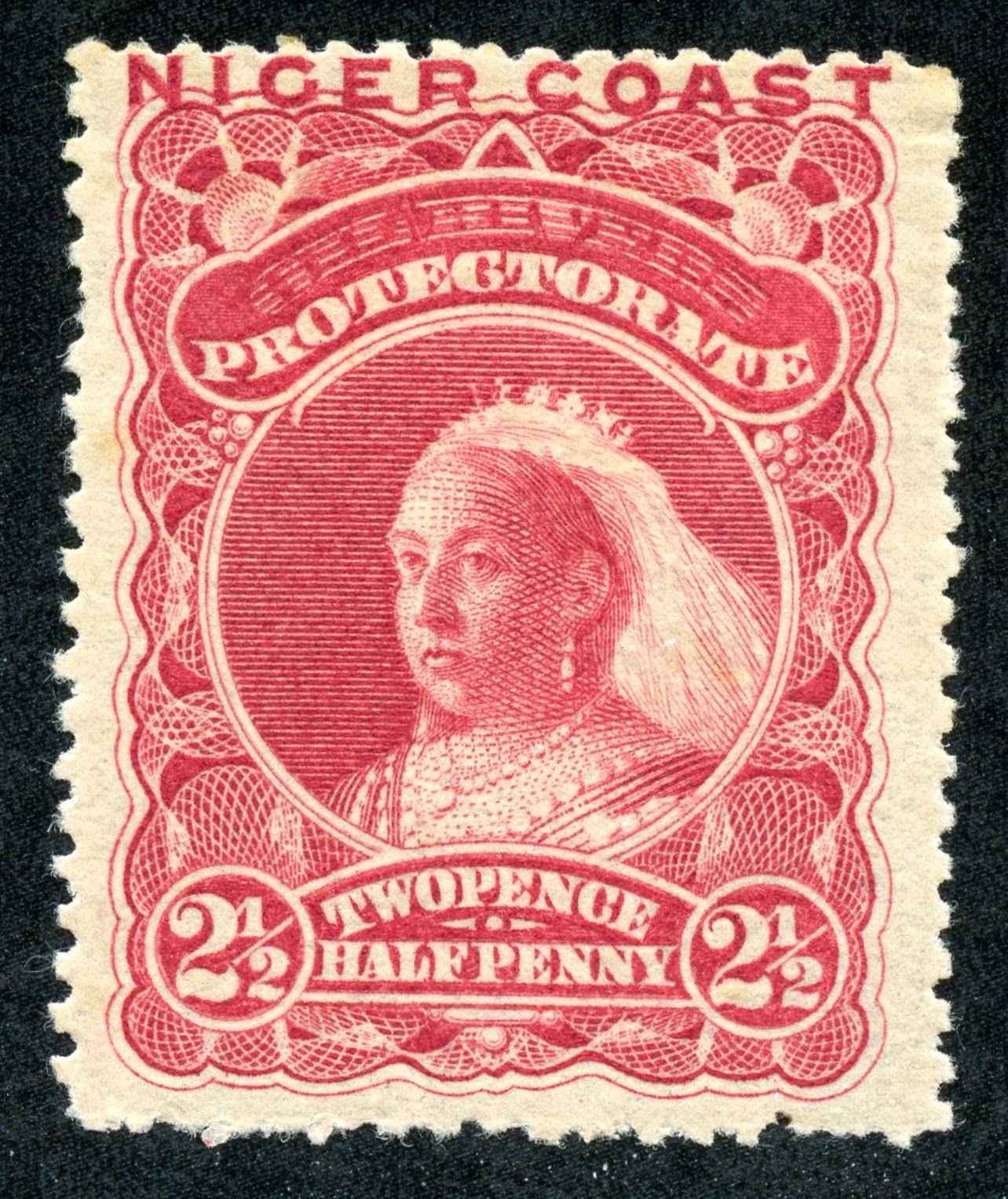 1893 Scott 40 2 1/2p carmine lake
"Queen Victoria"
The first issue proper for the territory used this rather striking design of Queen Victoria. This six stamp issue, of which I have several examples, has a CV ranging from $3+-$10+. 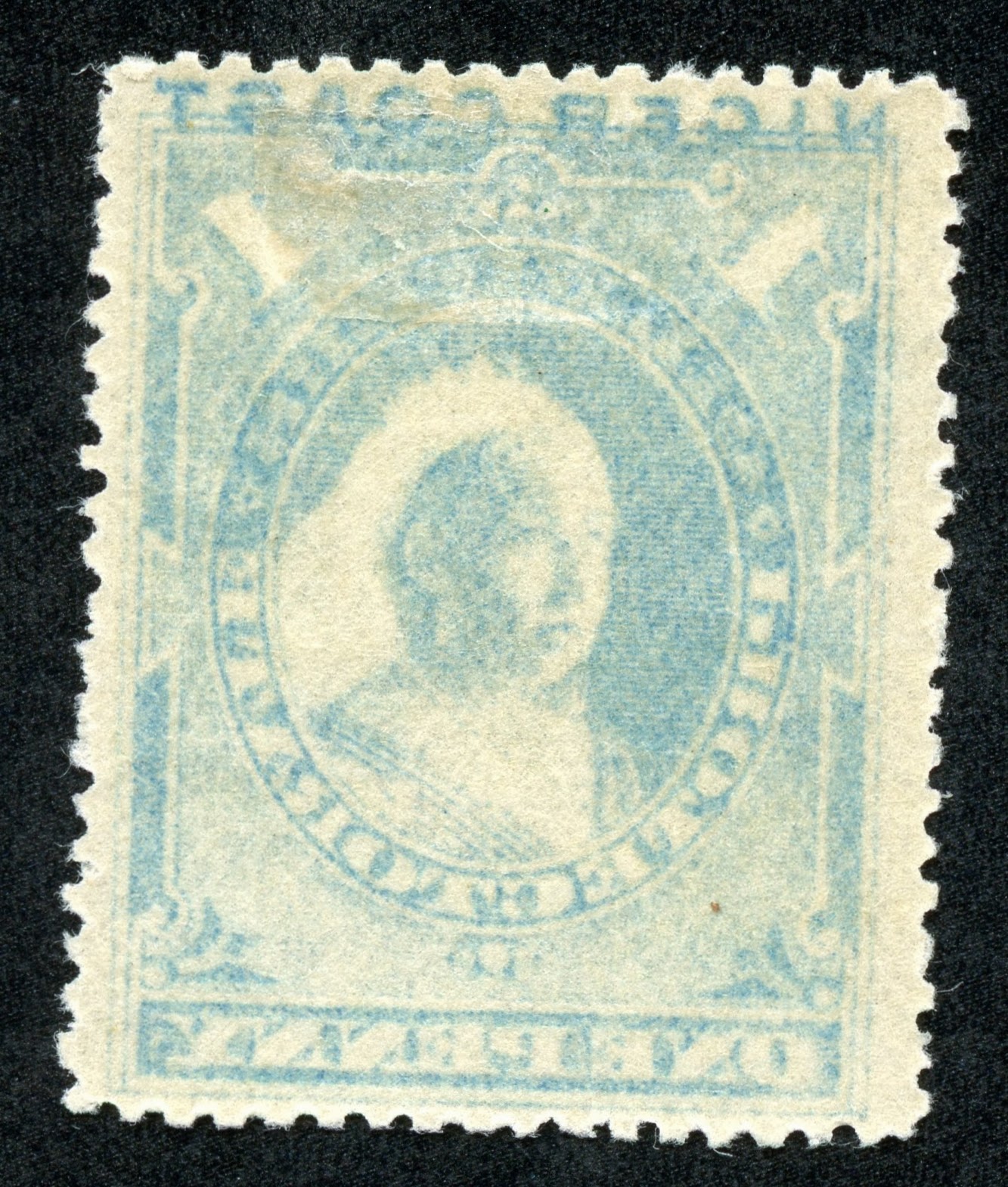 1893 Scott 38 back side 1p light blue
The paper is rather translucent, but I don't believe it is on pelure paper. Perhaps a reader knows more? 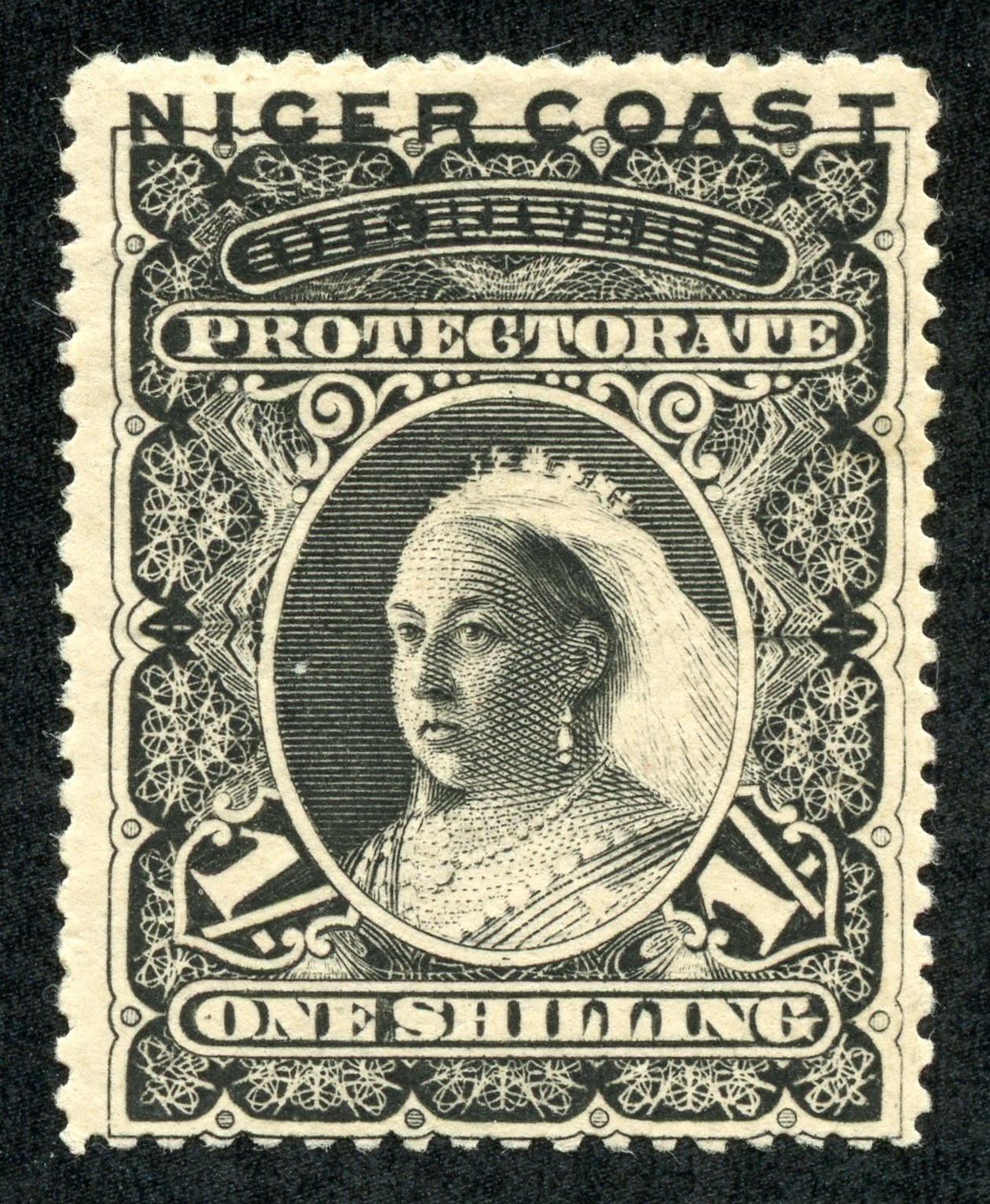 1893 Scott 42 1sh black 'Victoria"
There is another peculiarity with this issue. The stamps were printed just as the Protectorate was changing its name. Notice the "Oil Rivers" is blotted out, and "Niger Coast" has been overprinted? Fascinating.

There were two more similar issues featuring the Queen in 1894 (six stamps) and 1897-98 (nine stamps). These issues have the proper "Niger Coast" inscribed. Alas, I have none to show you at the moment. 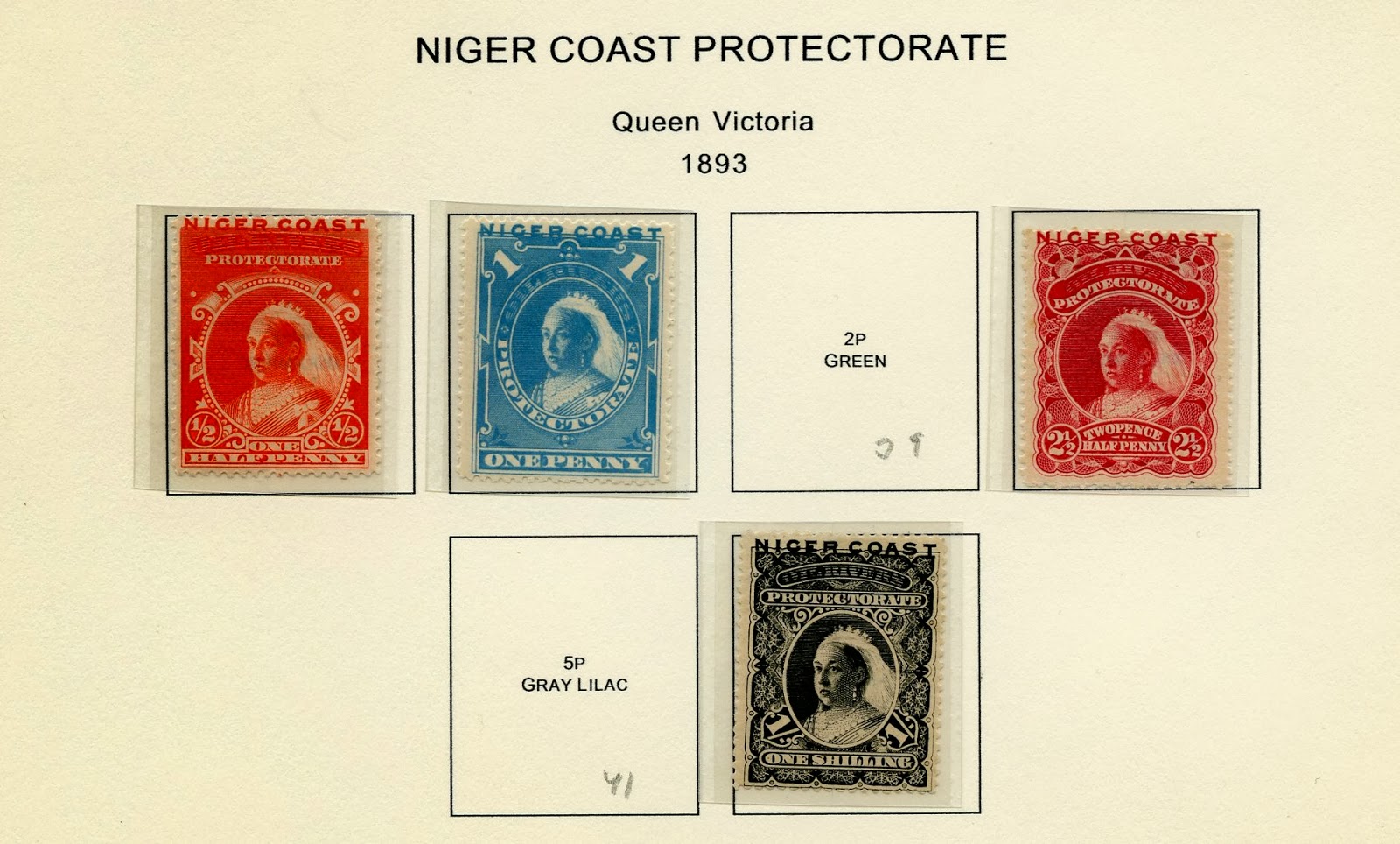 1893 Issue in Deep Blue
Deep Blue (Steiner) has four pages for all the major issues of the Oil Rivers/Niger Coast. I'm afraid that the 1 1/2 pages devoted to the 1893 surcharged issues will be wasted paper for me. ;-) 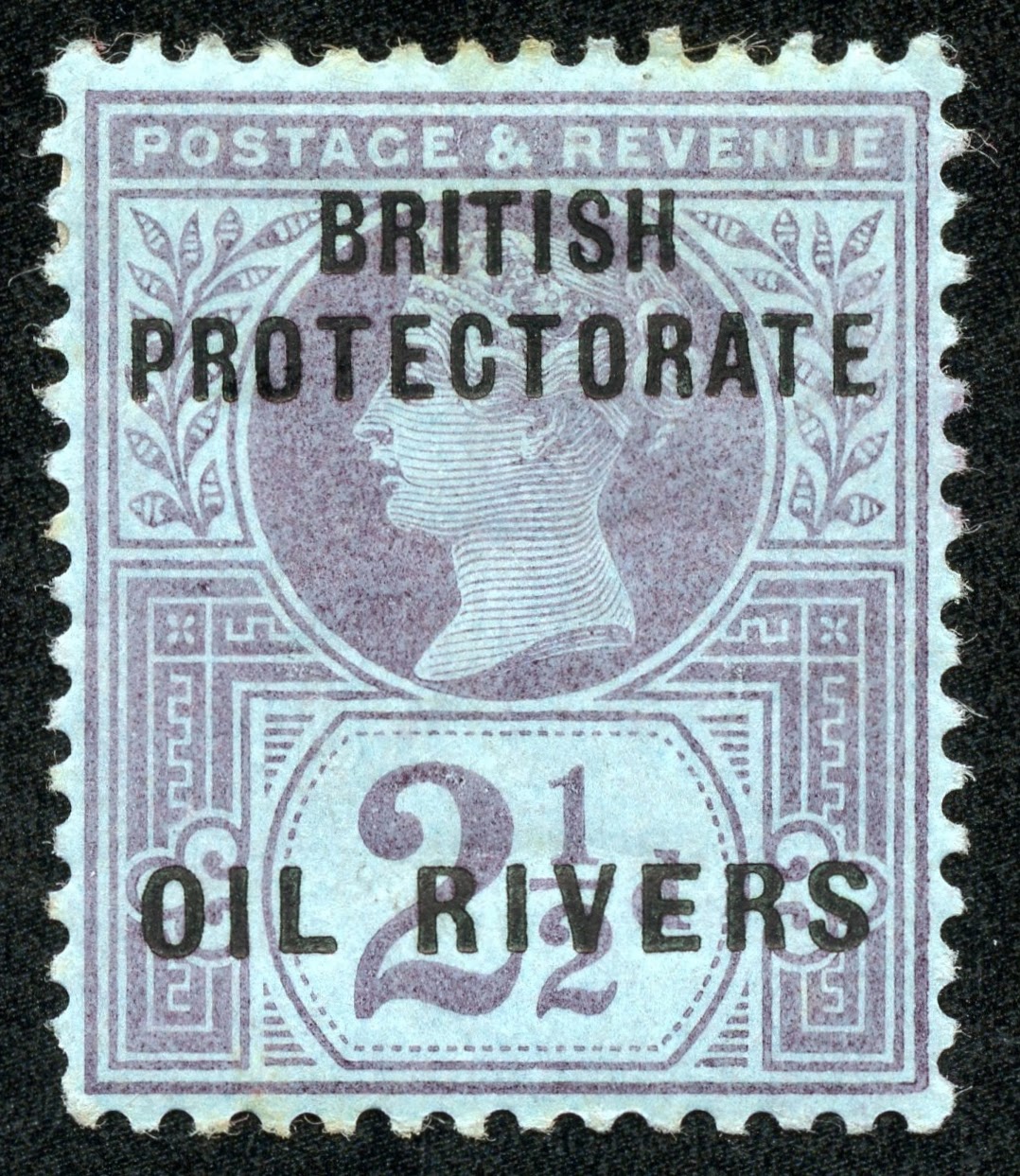 1892 Scott 4 2 1/2p violet/blue
Big Blue
Big Blue, on two lines of one page, has six spaces for the stamps of Niger Coast Protectorate. The page  has "North West Pacific Islands" on the lower portion, and is located between New Caledonia and the Newfoundland sections. 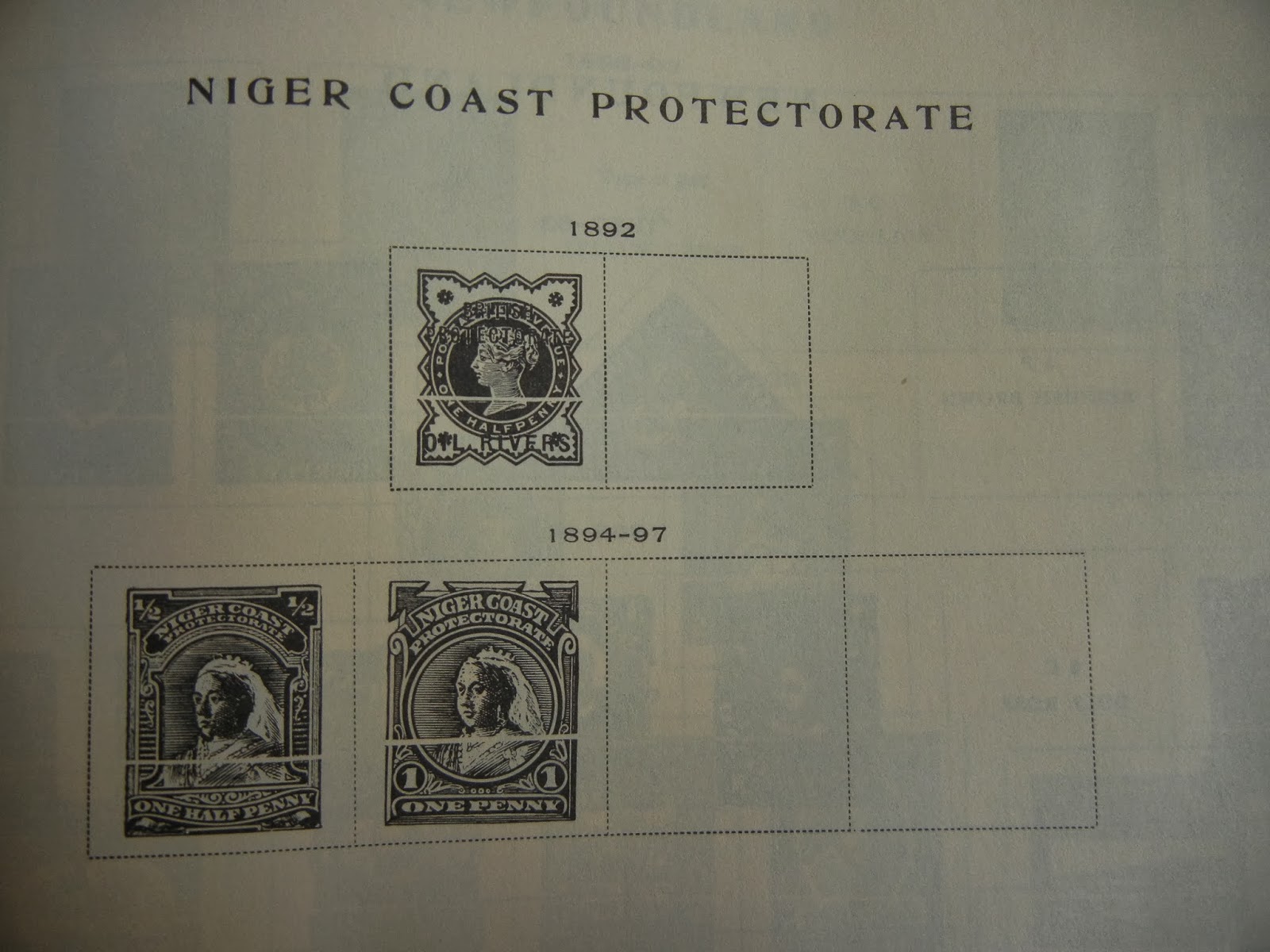 Niger Coast Protectorate in Big Blue
Coverage is 9%, not bad considering the generally higher CV for this country.

The good news is that there are no spaces requiring a CV $10 stamp or higher.

Big Blue, though, doesn't have any spaces for the 1893 issue, which I show on this blog post. 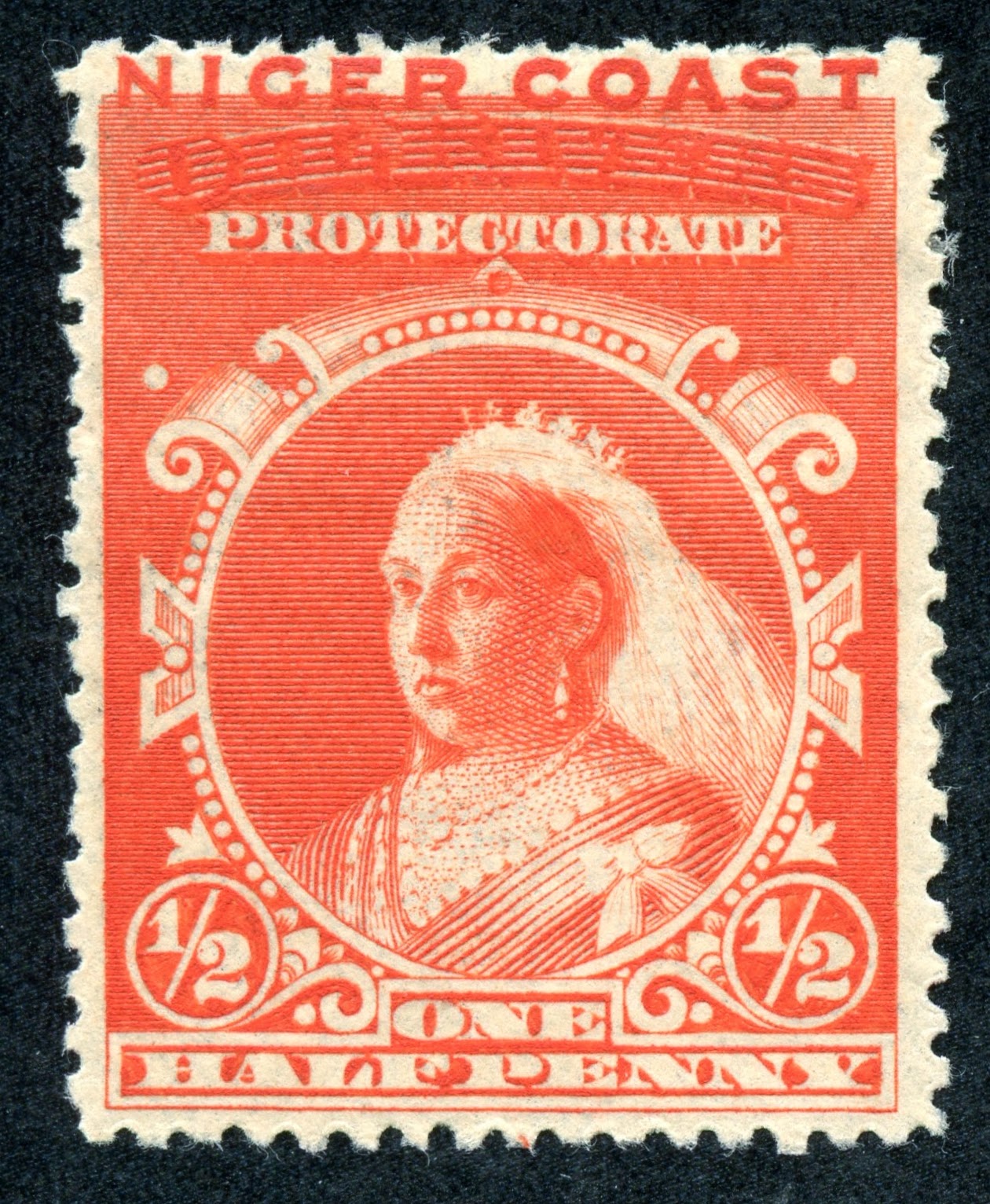 1893 Scott 37 1/2p vermilion "Queen Victoria"
Out of the Blue
Sun Yat-sen of China is said to appear on more stamps than any other person in history. Really? Beating out Queen Victoria?

Note: The Nigeria Map shown is with the kind permission of Michael Adkins, of Dead Country Stamps website fame.