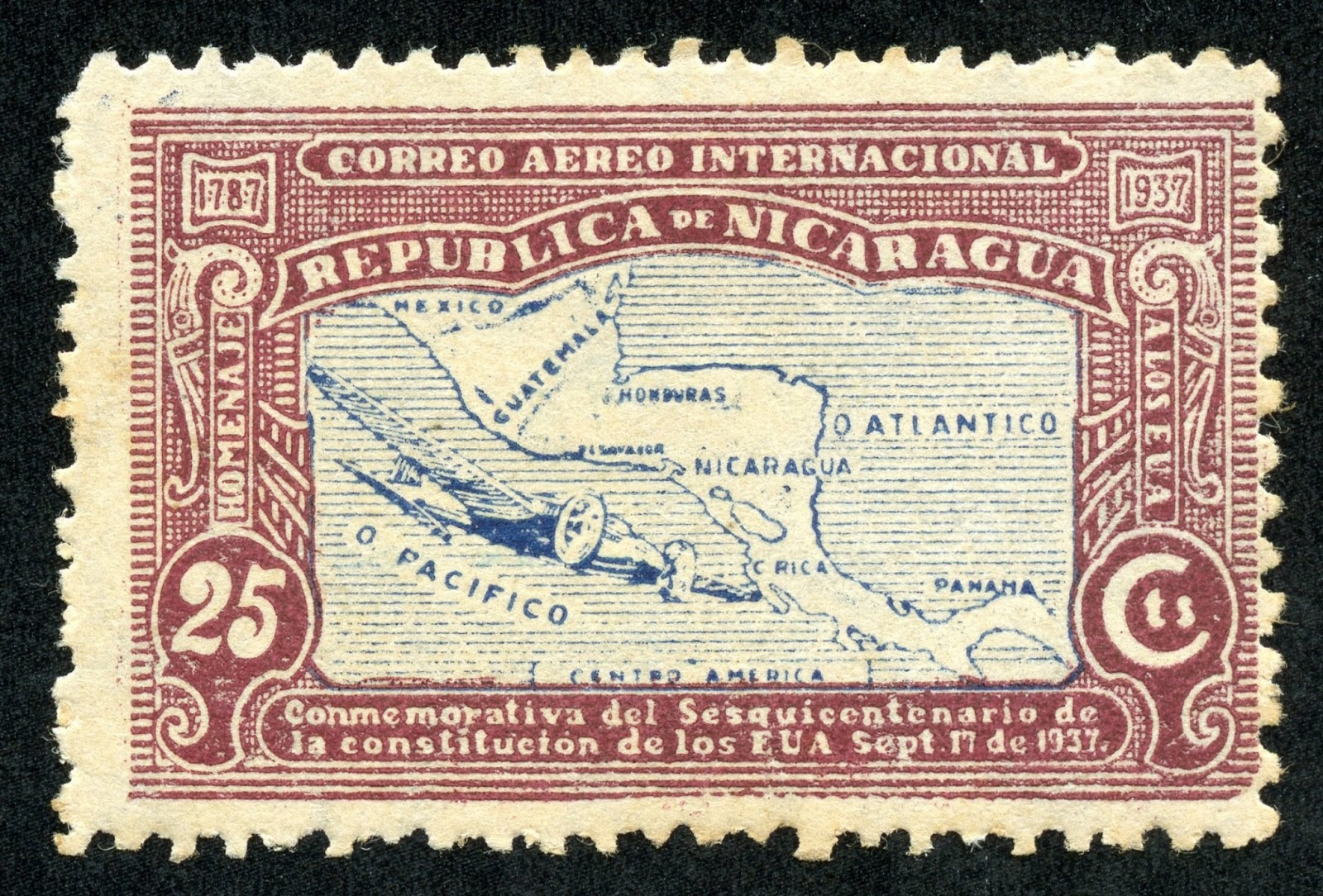 1937 Scott C206 25c violet brown "Map of Central America"
Issue commemorating the 150th Anniversary of the Constitution of the U.S.
Quick History
What makes Latin American countries so inviting for classical stamp collectors? Nicaragua is a good case in point. The stamps themselves are attractive: but, even more so, are the numerous overprints and surcharges found for many issues. And, generally, the CV is reasonable. The challenge, though, is to find a source, because, other than the Seebeck era, the stamps - especially the surcharged/overprinted stamps- are not that common in feeder collections.

And most of the Latin American countries produced a lot of stamps during the classical era. Nicaragua, by my count, has 1,715 major descriptions in the Scott catalogue. 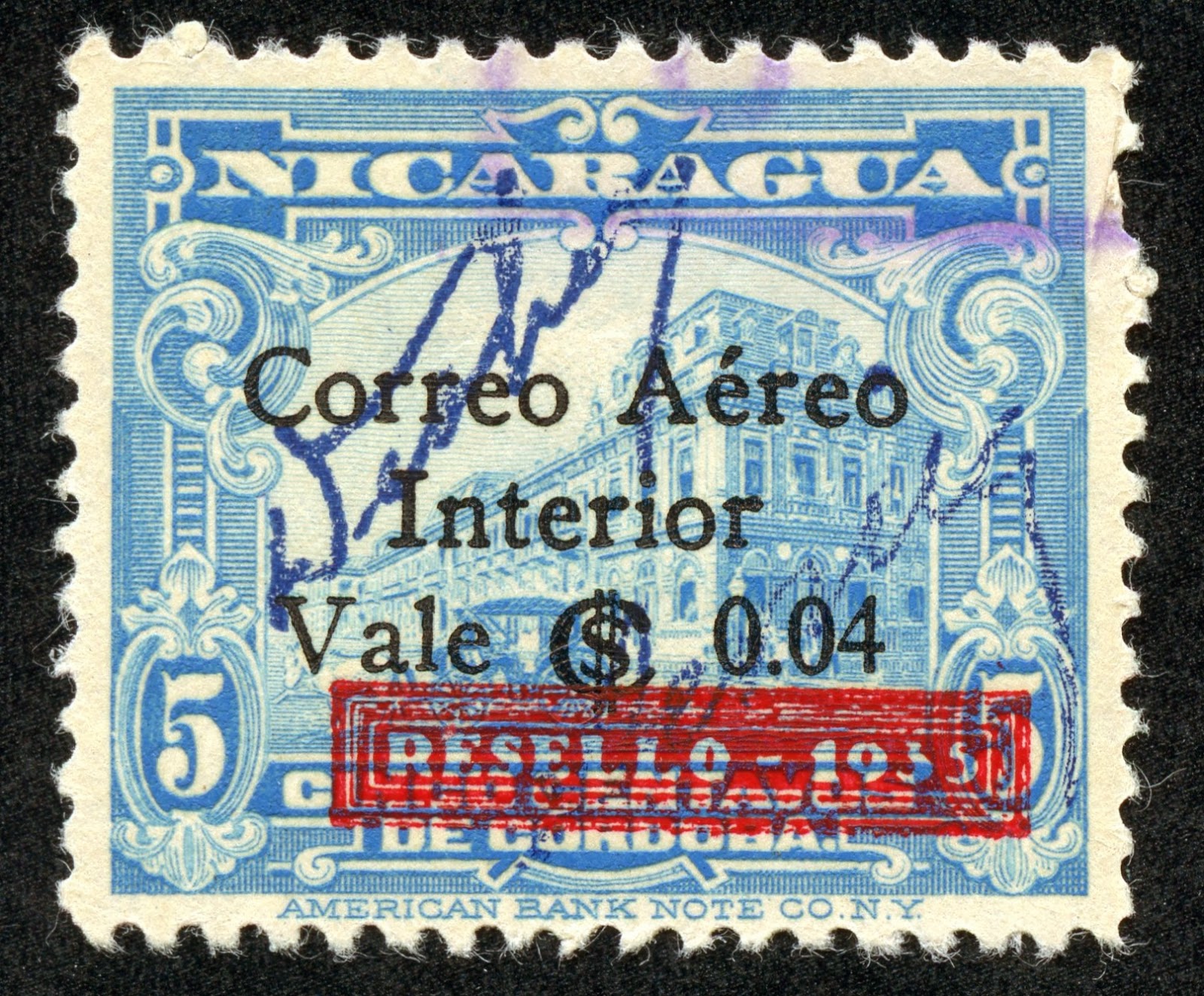 1936 Scott C124 4c on 5c light blue
Overprint in Red on 1933 Air Post Issue
Into the Deep Blue
The challenge is how to present Nicaragua, which has an abundance of stamps and categories. In the Deep Blue album, there resides some 1,000 stamps of Nicaragua, and each has a story to tell. ;-)

A closer look at the stamps and issues
Consequently, I selected a category- Air Post- to feature, and the first blog had an introduction to these stamps. This blog post will continue the theme, as the Air Post category illustrates many of the characteristics of Nicaraguan issues: frequent changes in stamps, some nicely engraved by foreign firms (American Bank Note Company), some locally produced of varying quality, control marks, overprinted varieties, surcharged varieties, and varieties overprinted/surcharged on already overprinted/surcharged stamps. !! 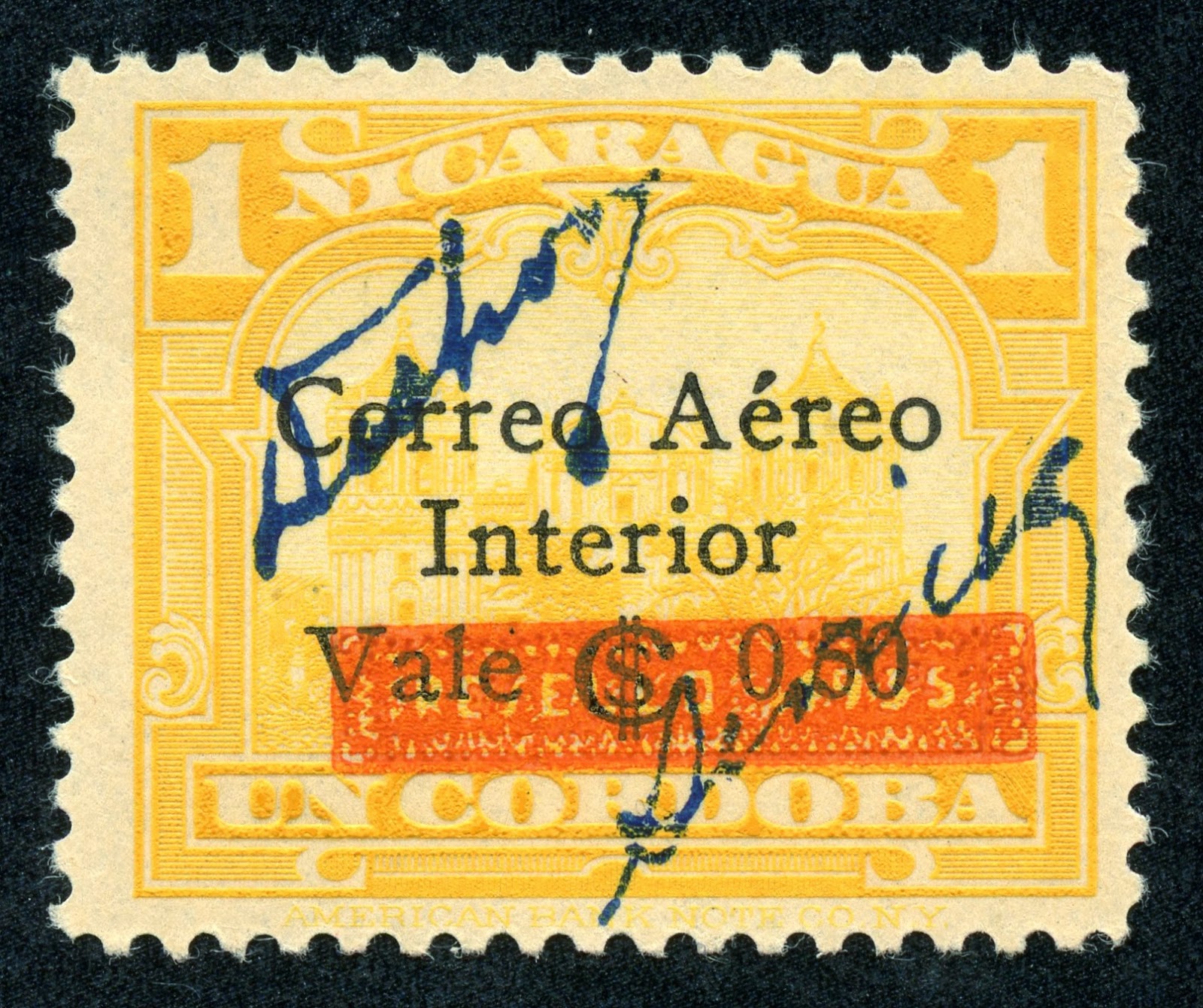 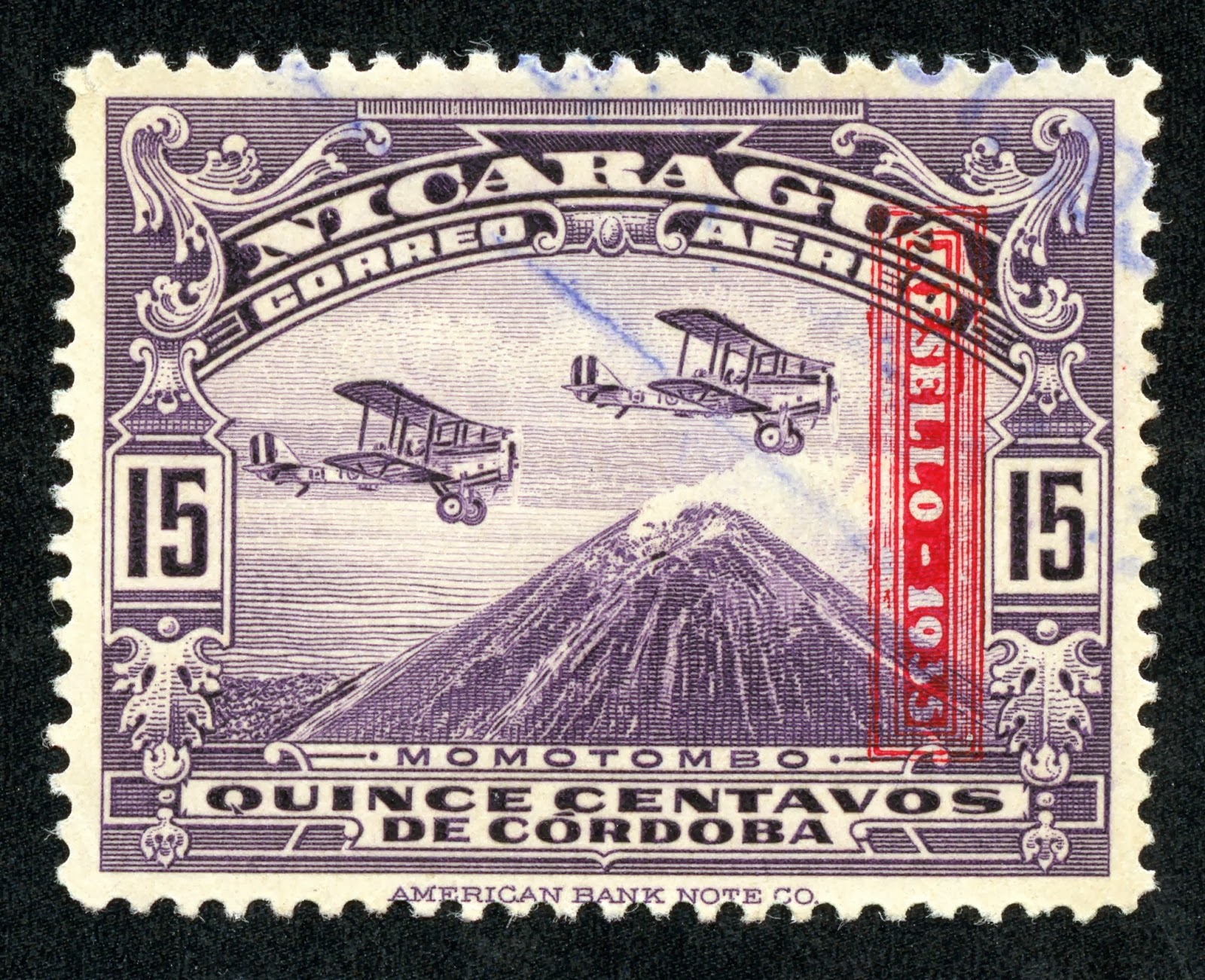 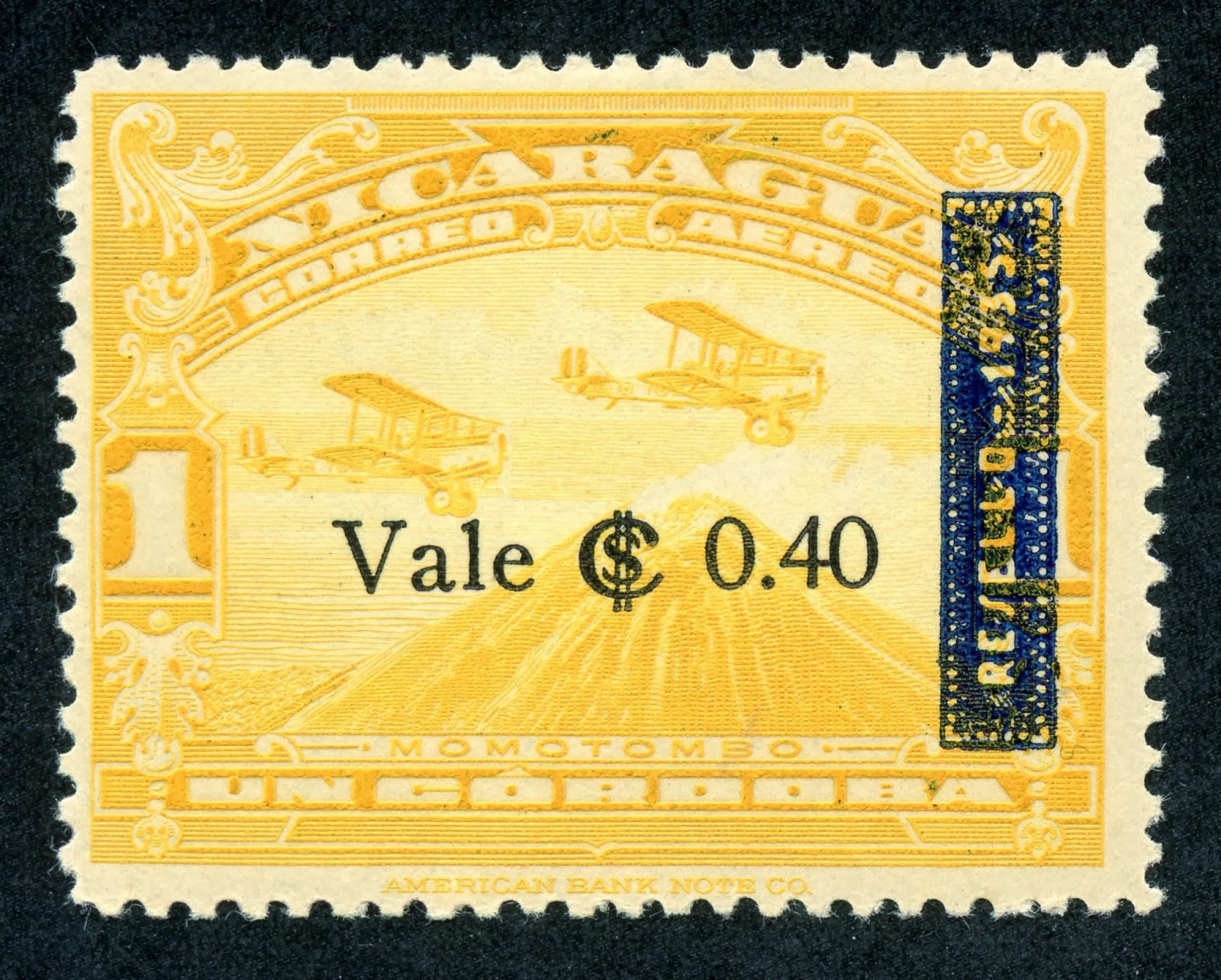 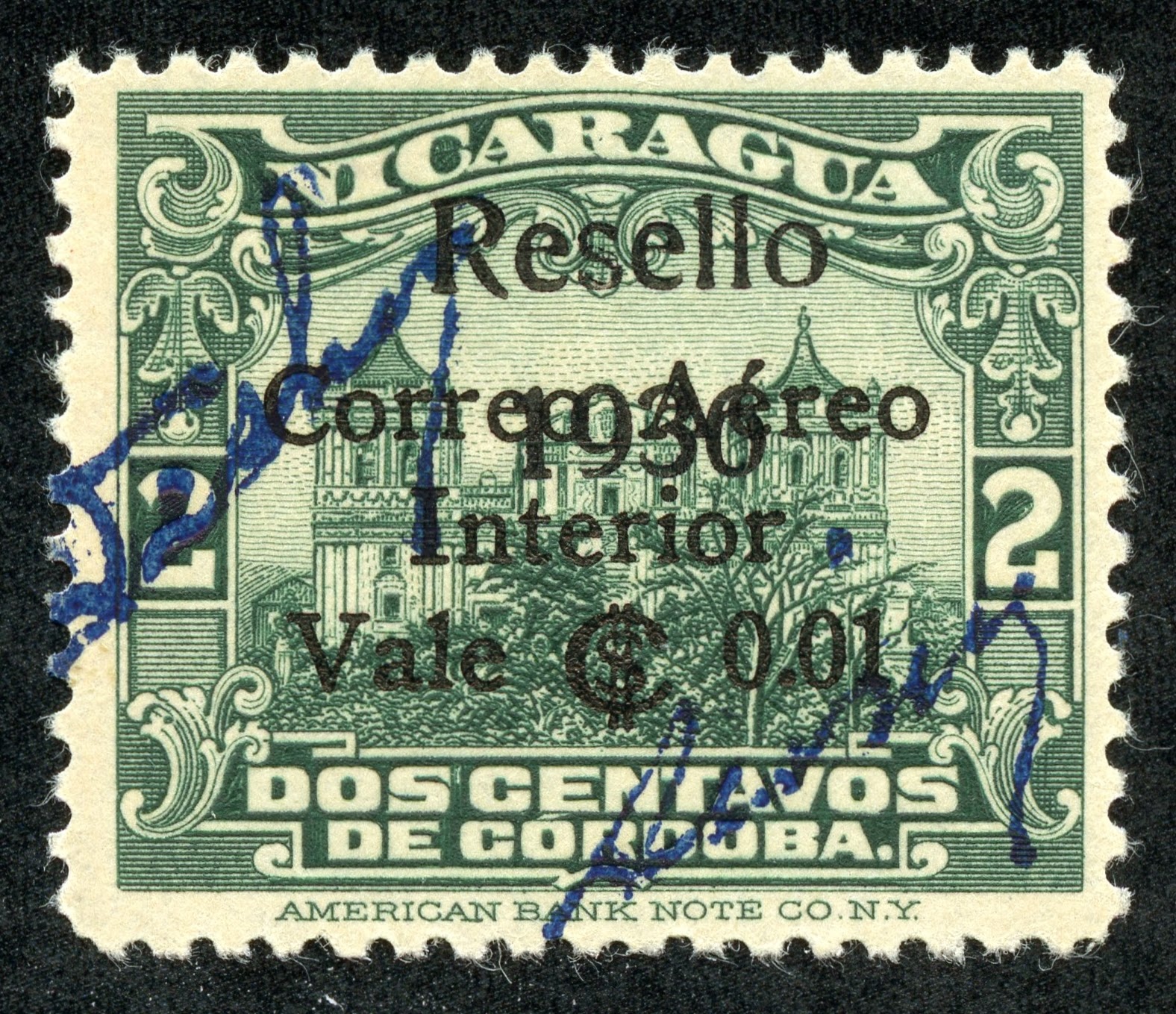 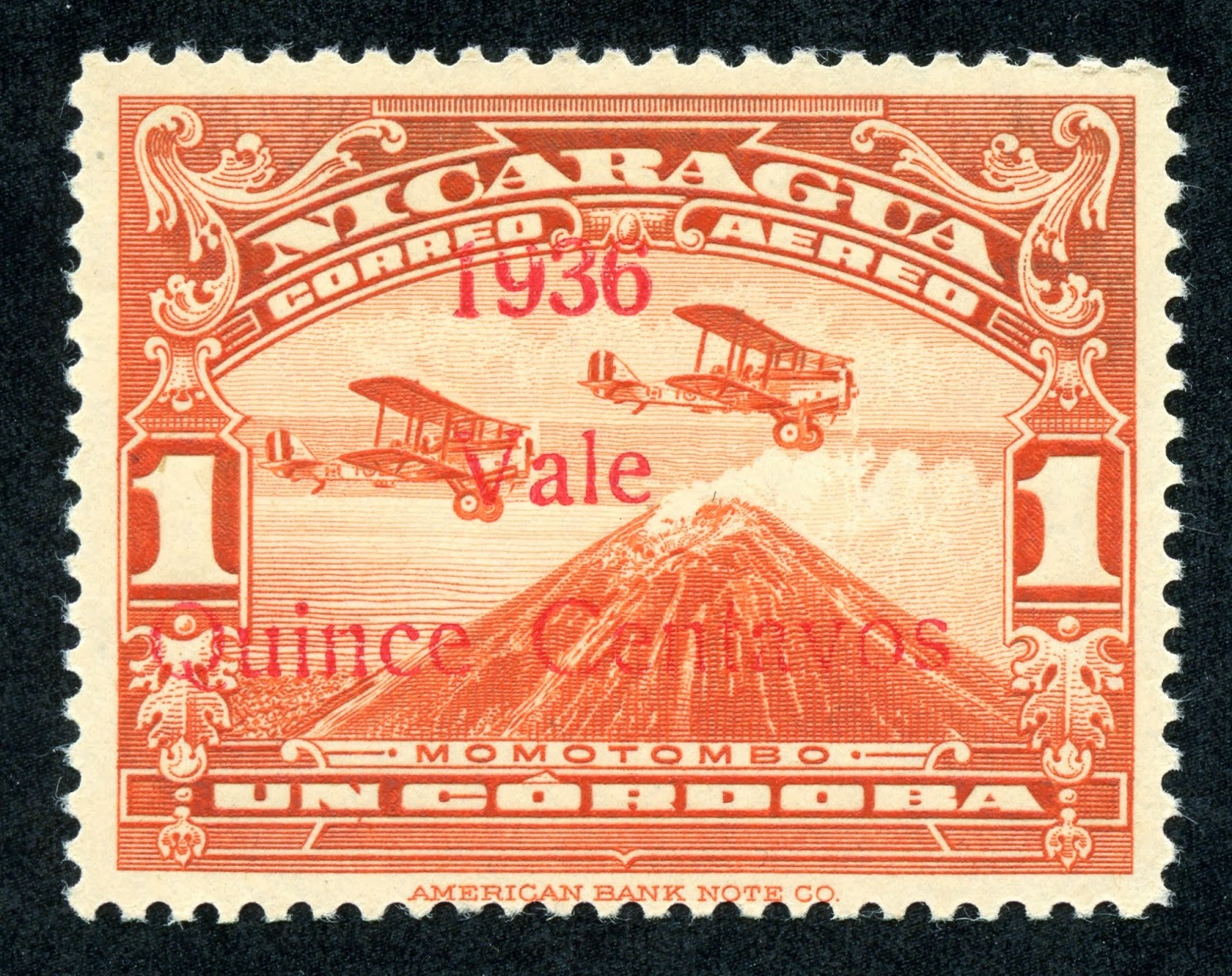 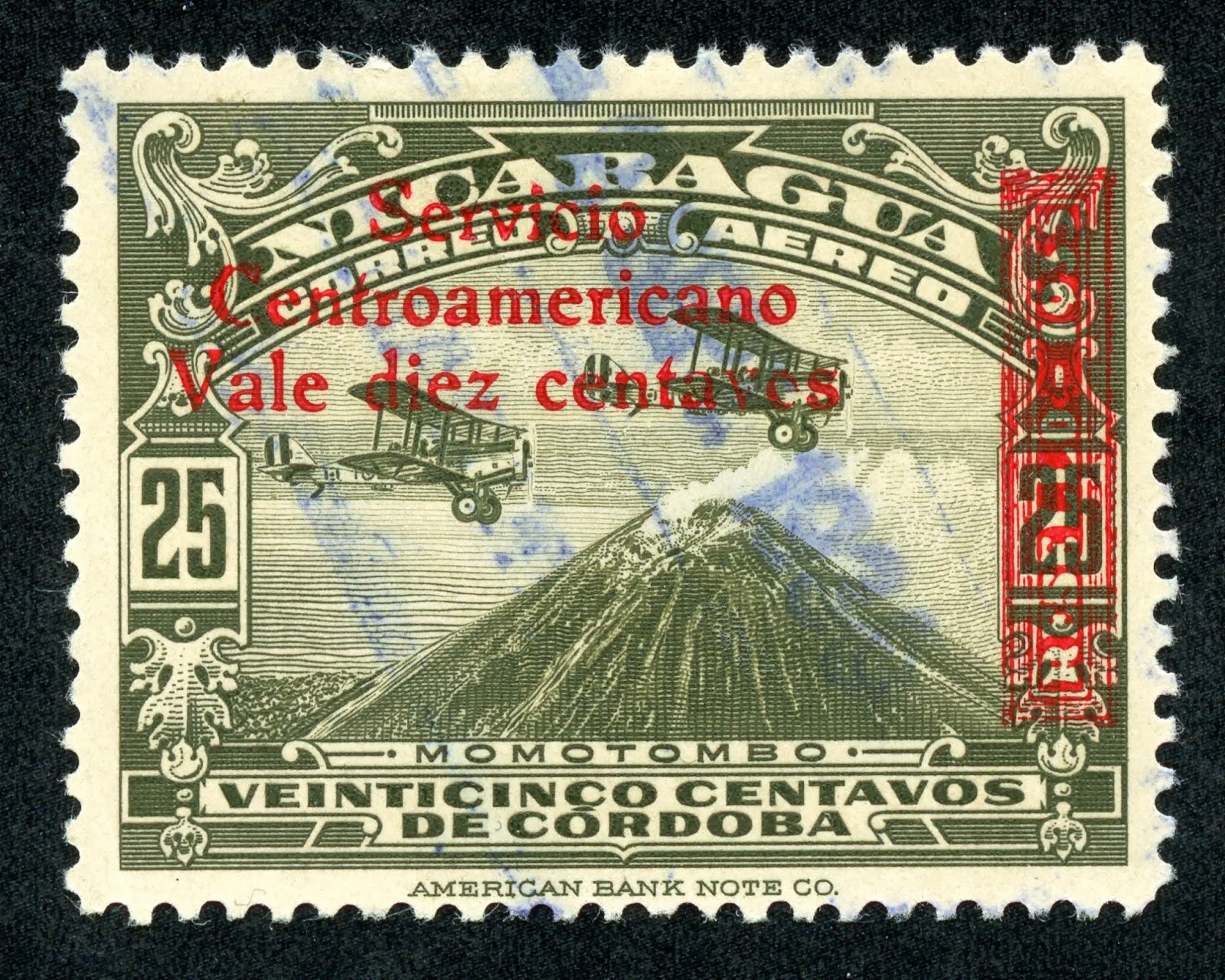 1936 Scott C154 10c on 25c olive black
Surcharged and Overprinted in Red, On 1929 C4
The only example of this surcharge is illustrated here. 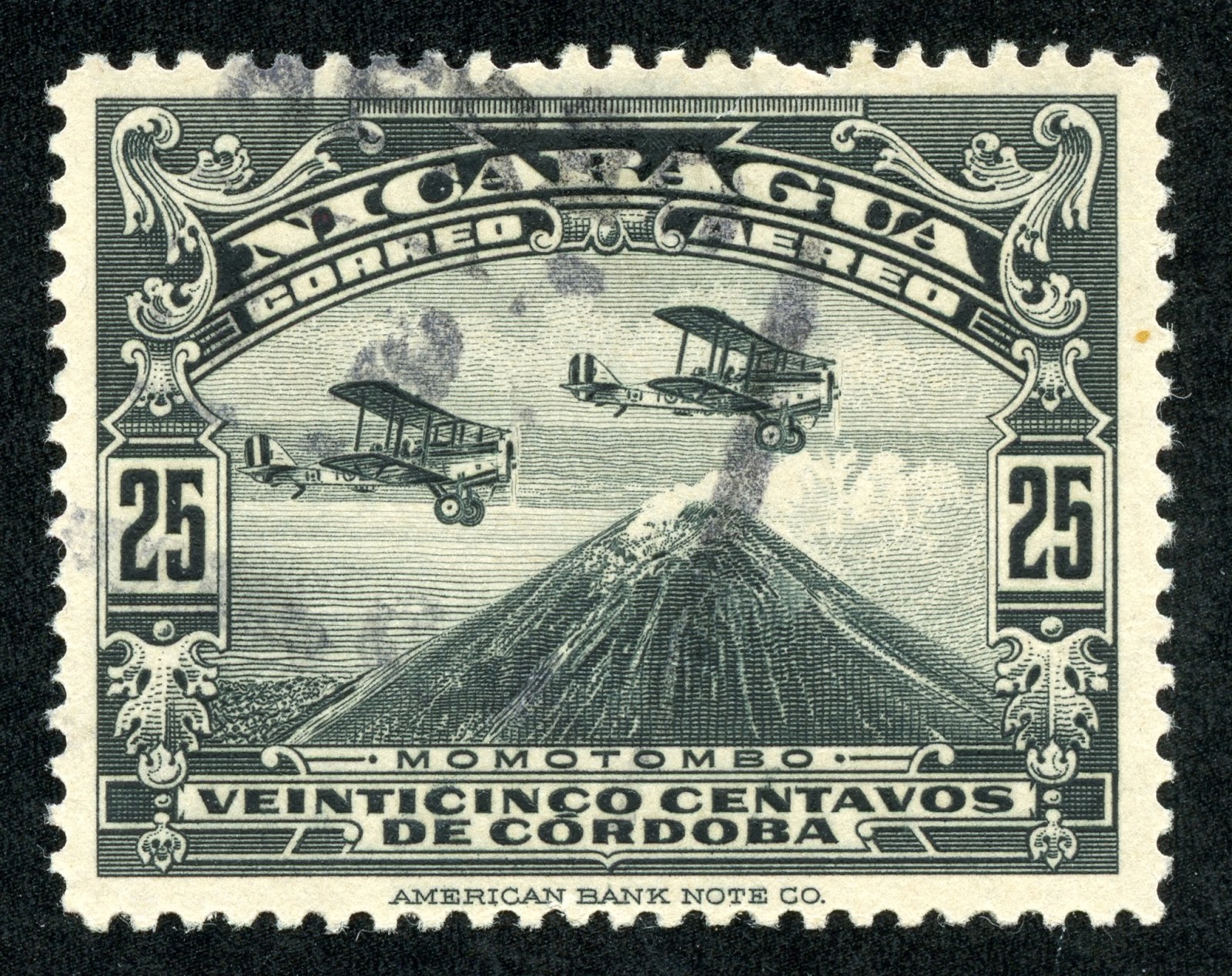 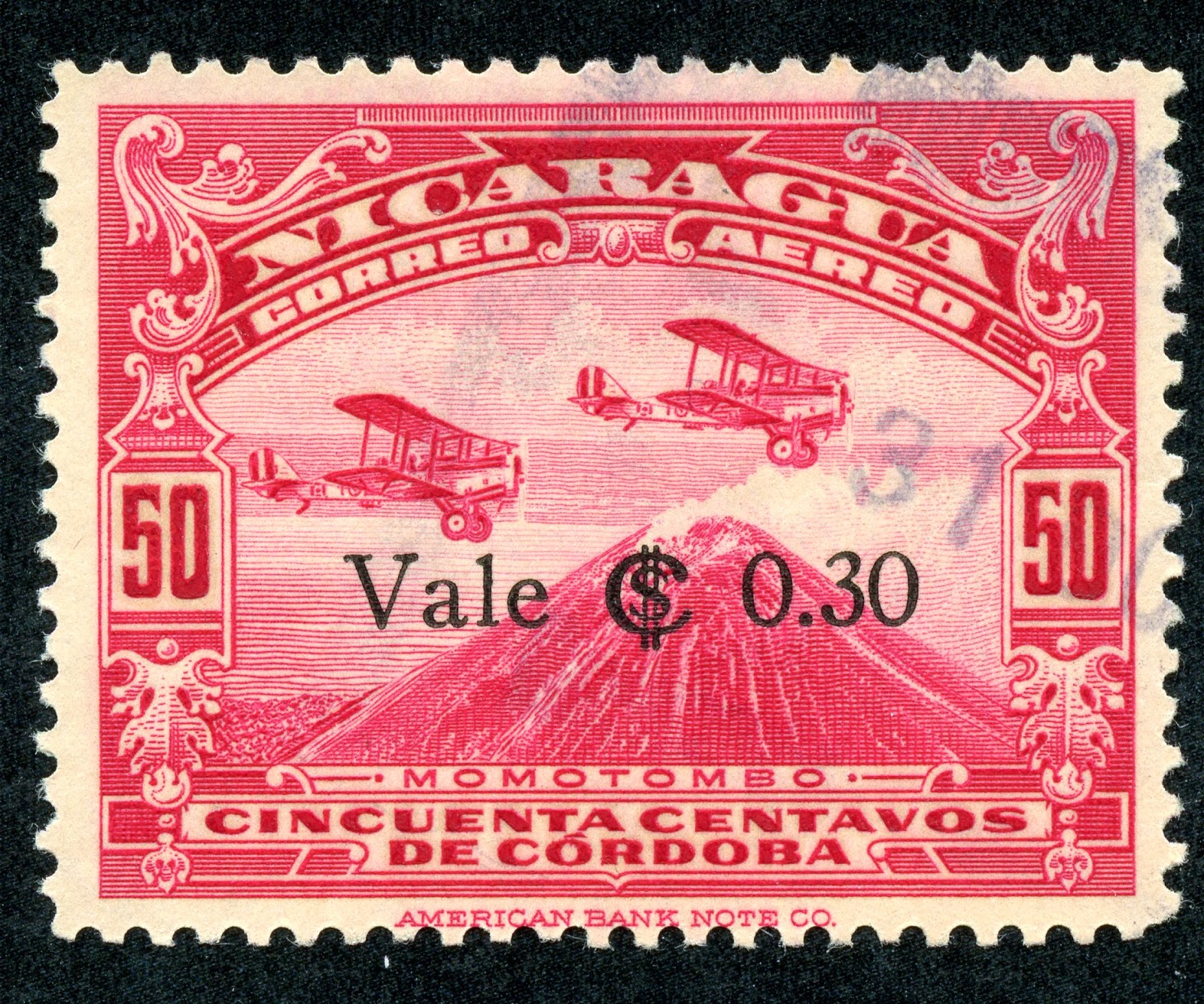 1937 Scott C169 30c on 50c carmine rose
Surcharged in Black
And , in addition, four more stamps of the "Momotombo" design were surcharged on different new colors! 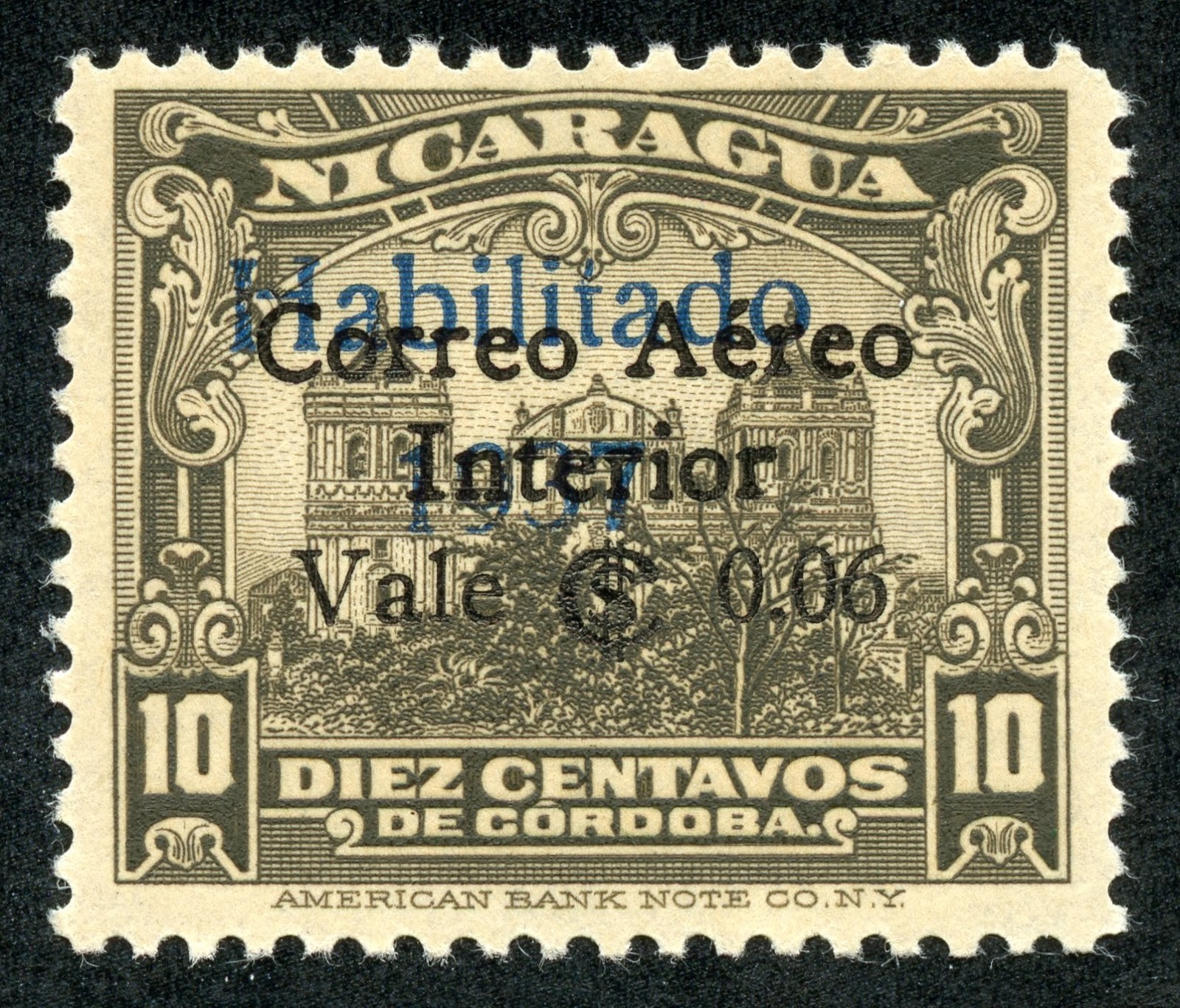 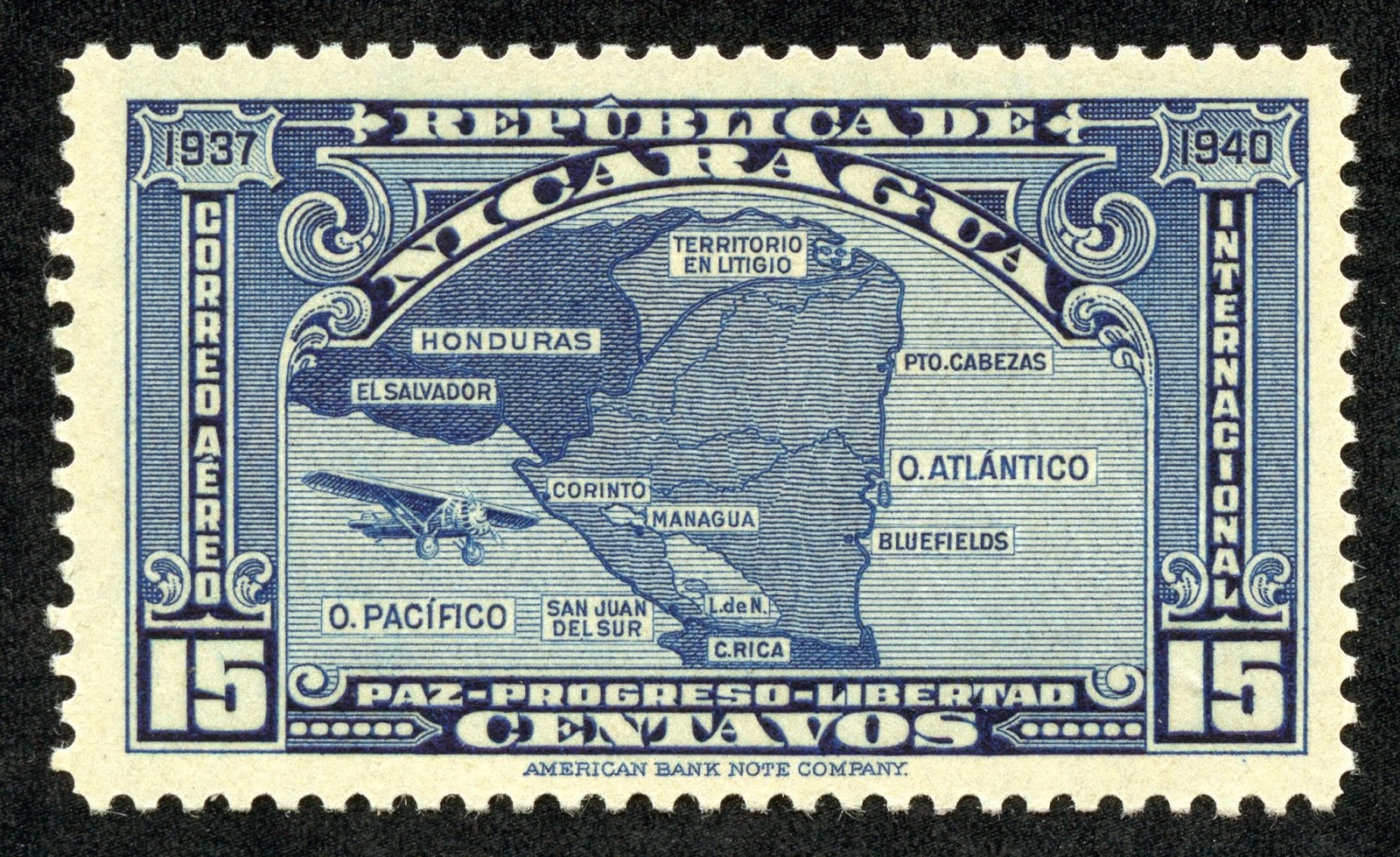 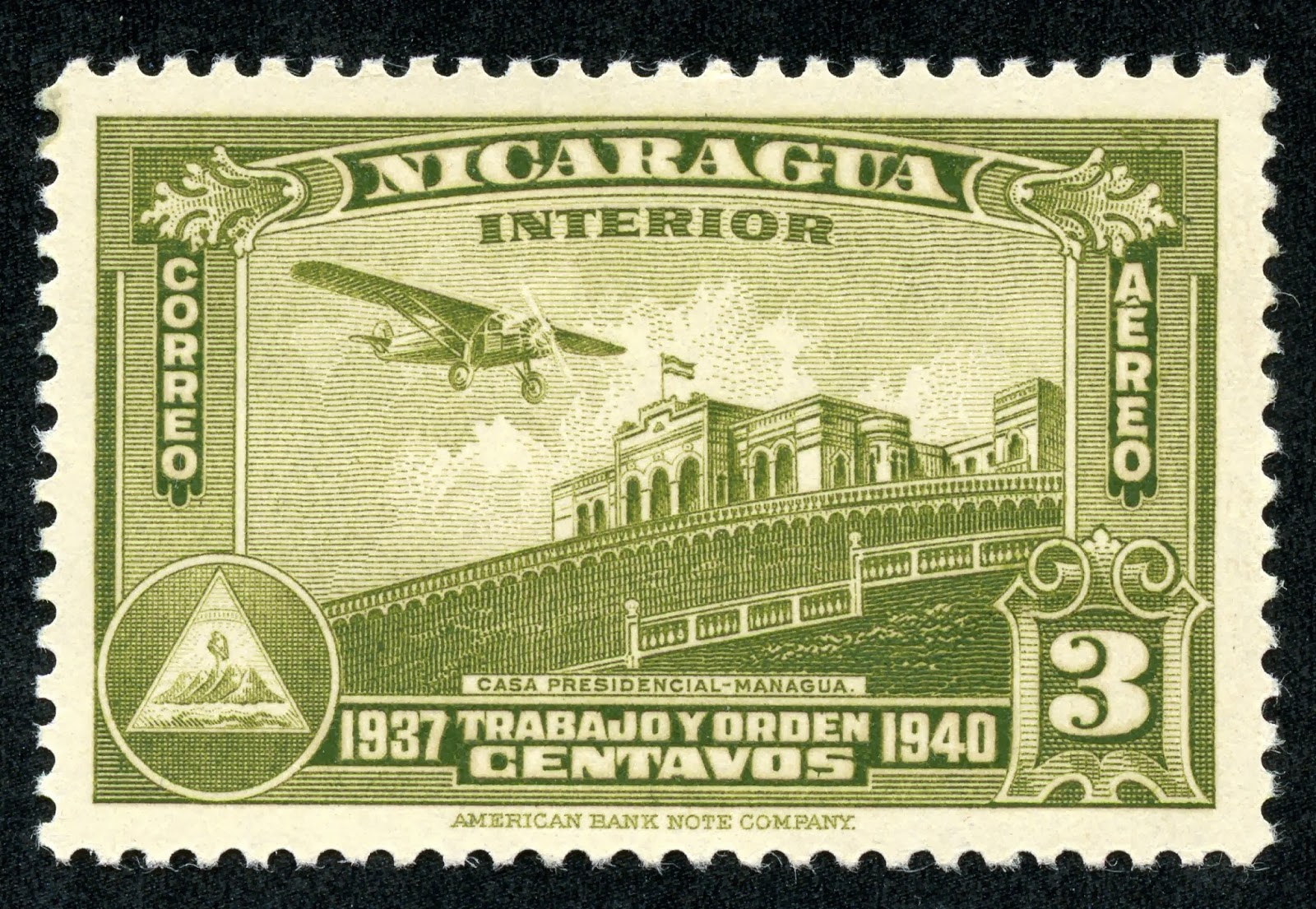 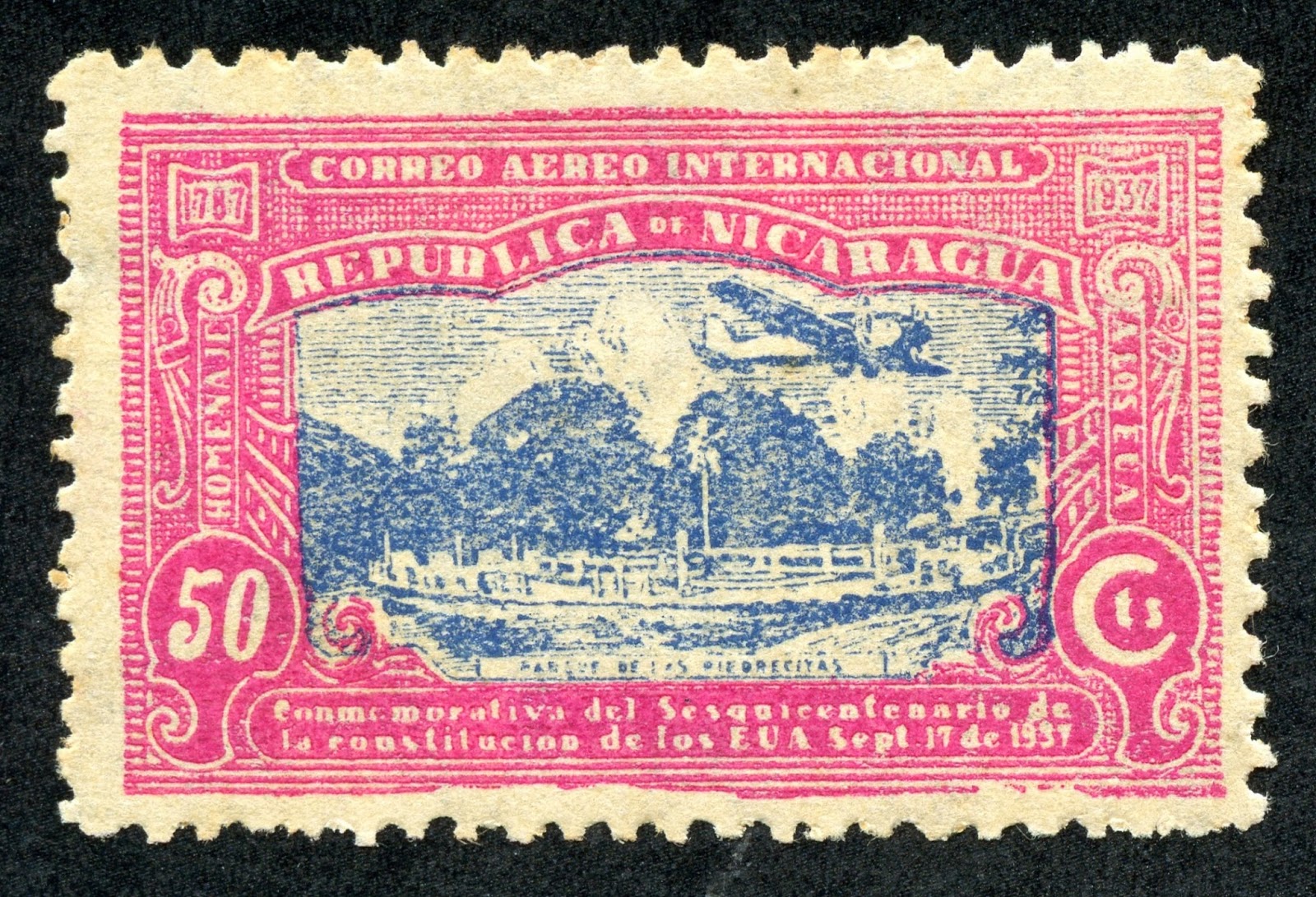 1937 Scott C211 50c rose lilac "Park"
Issue commemorating the 150th Anniversary of the Constitution of the U.S.
In 1937, a curious 12 stamp issue with different "Nicaragua" scenes was issued, bi-color, in typography, according to Scott. The detail work is rather poorly done and difficult to make out.

And the set is dedicated to the "150th Anniversary of the Constitution of the U.S." But the scenes are all local, so I'm not sure what the linkage is. 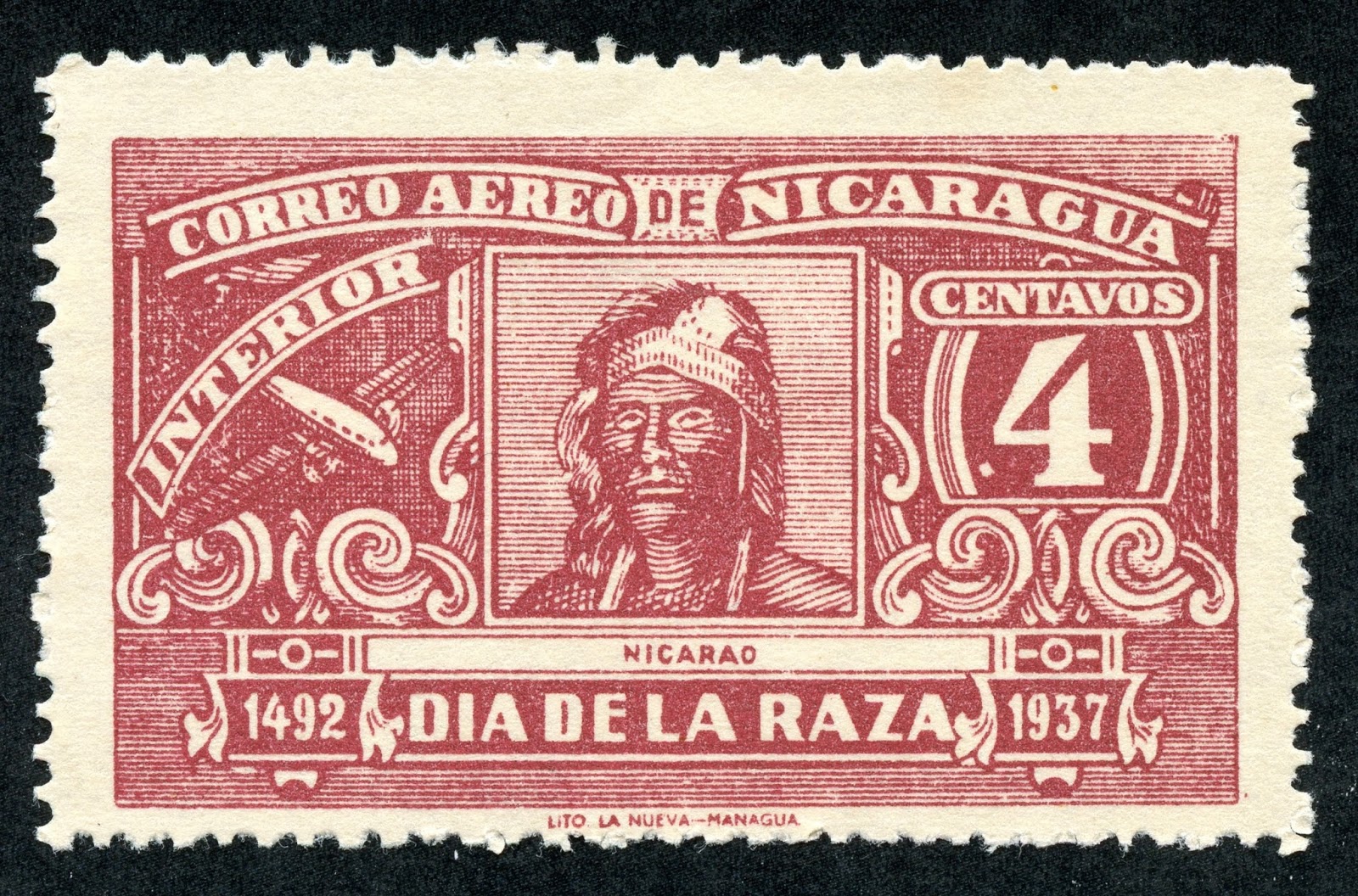 Nicarao was the leading Indian Chief  when the conquistadors arrived in 1502. 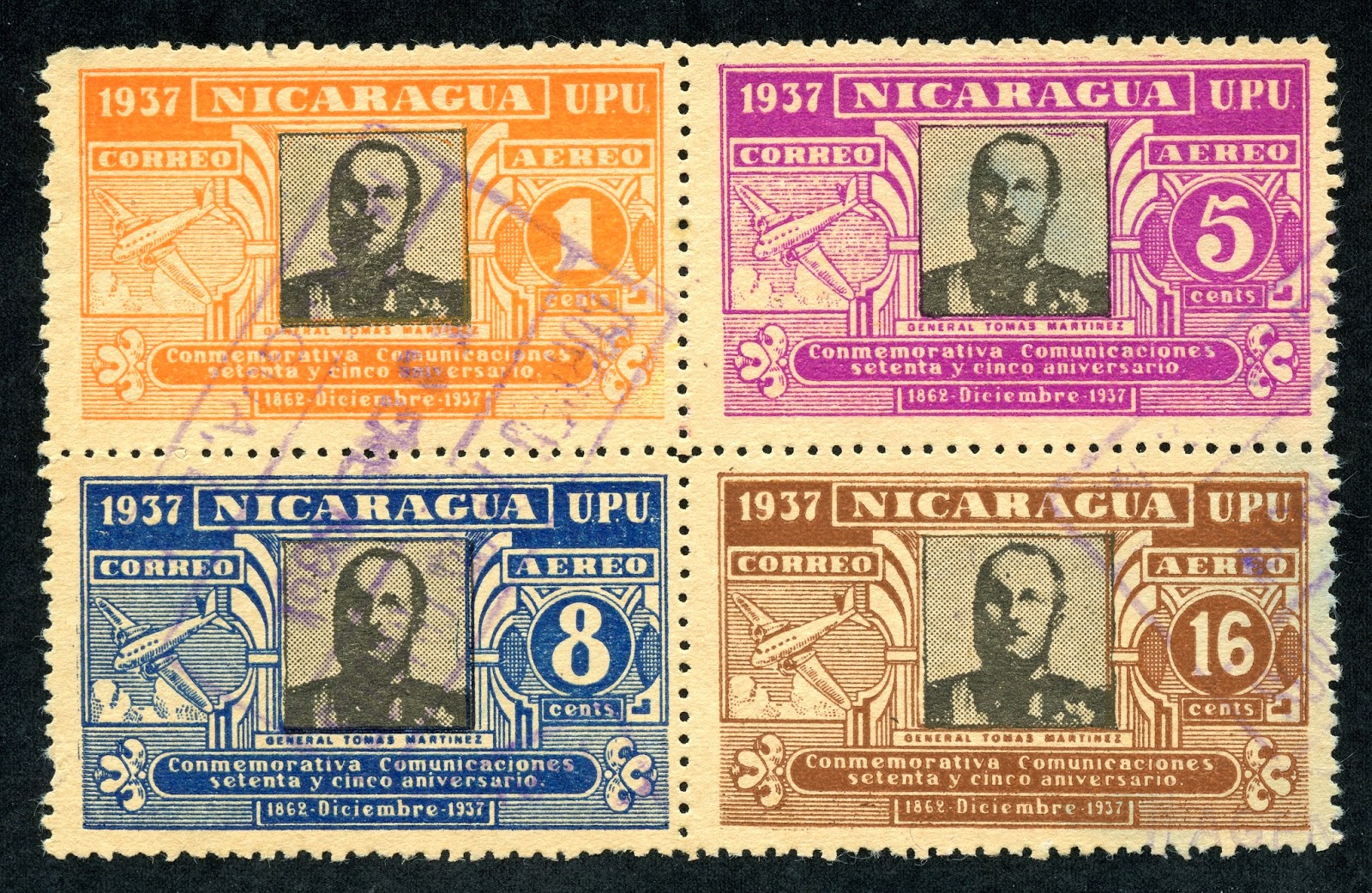 1938 Scott 221B-E, For Domestic Postage
"Gen. Tomas Martinez"
75th Anniversary of the Postal Service
Printed in sheets of four, these 1938 stamps were intended for use on domestic postage.

Tomas Martinez was the President of Nicaragua from 1857-1867 after the American adventurer William Walker was removed from the presidency in 1857. 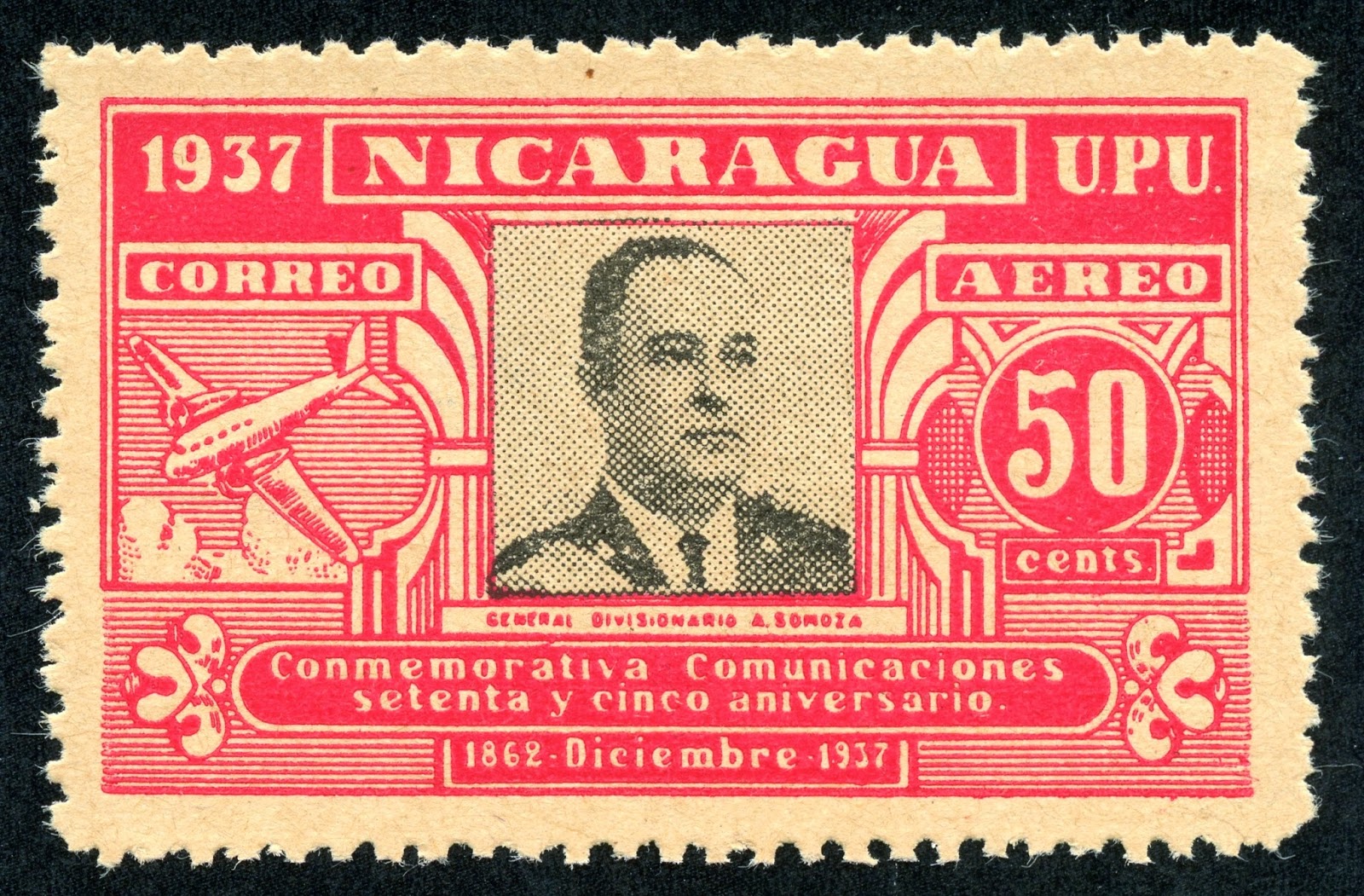 A four stamp issue for international postage was likewise produced. It had the portrait of the strongman Anastasio Somoza Garcia who essentially ruled as dictator from 1937 until his assassination in 1956. 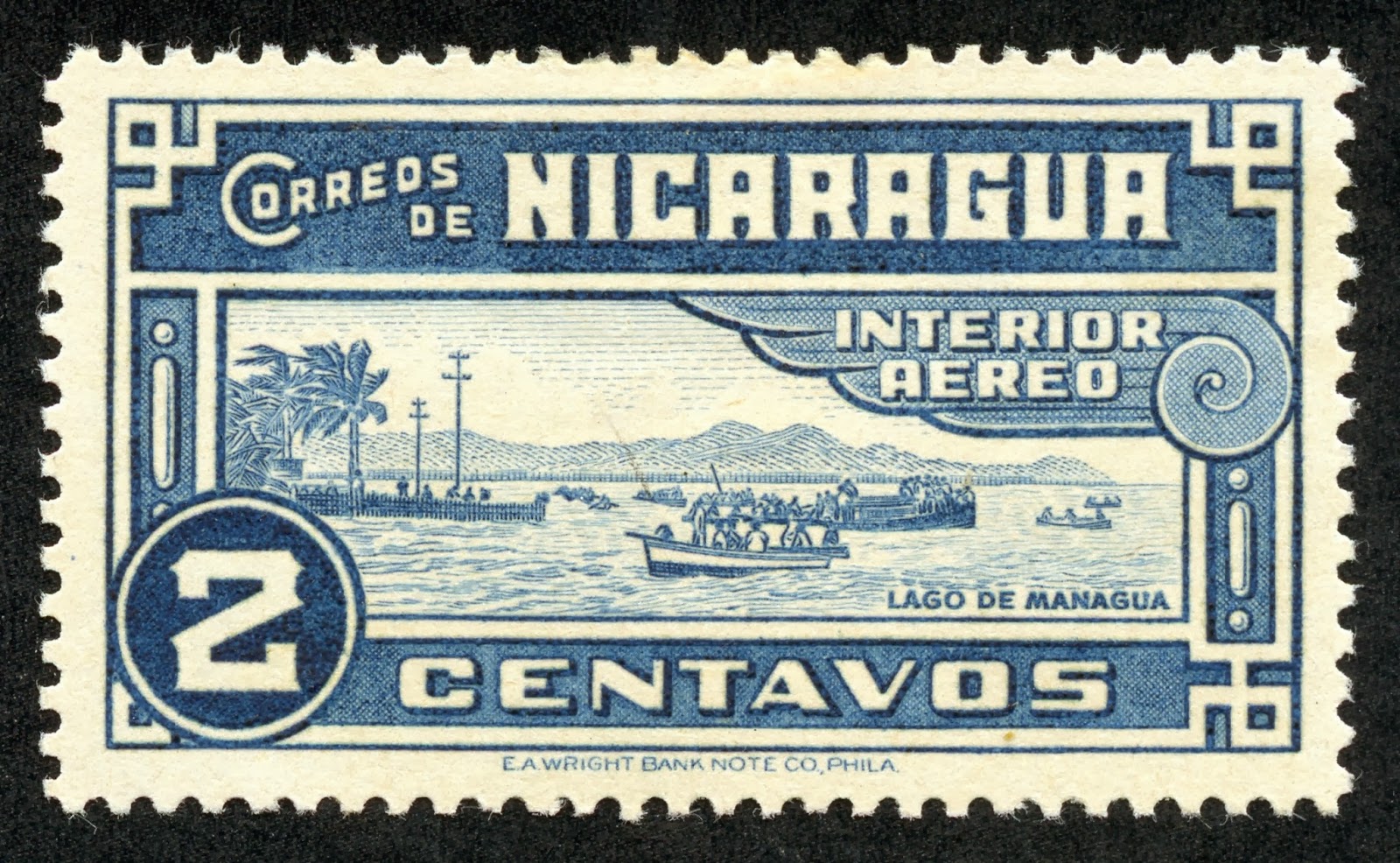 Lake Managua, some 40 miles long by 16 miles wide, was featured on seven stamps issued in 1939. Despite the idyllic drawing, the lake is heavily polluted because of the presence of raw sewage.

These stamps were produced by the E.A.Wright Bank Note Co., Philadelphia. 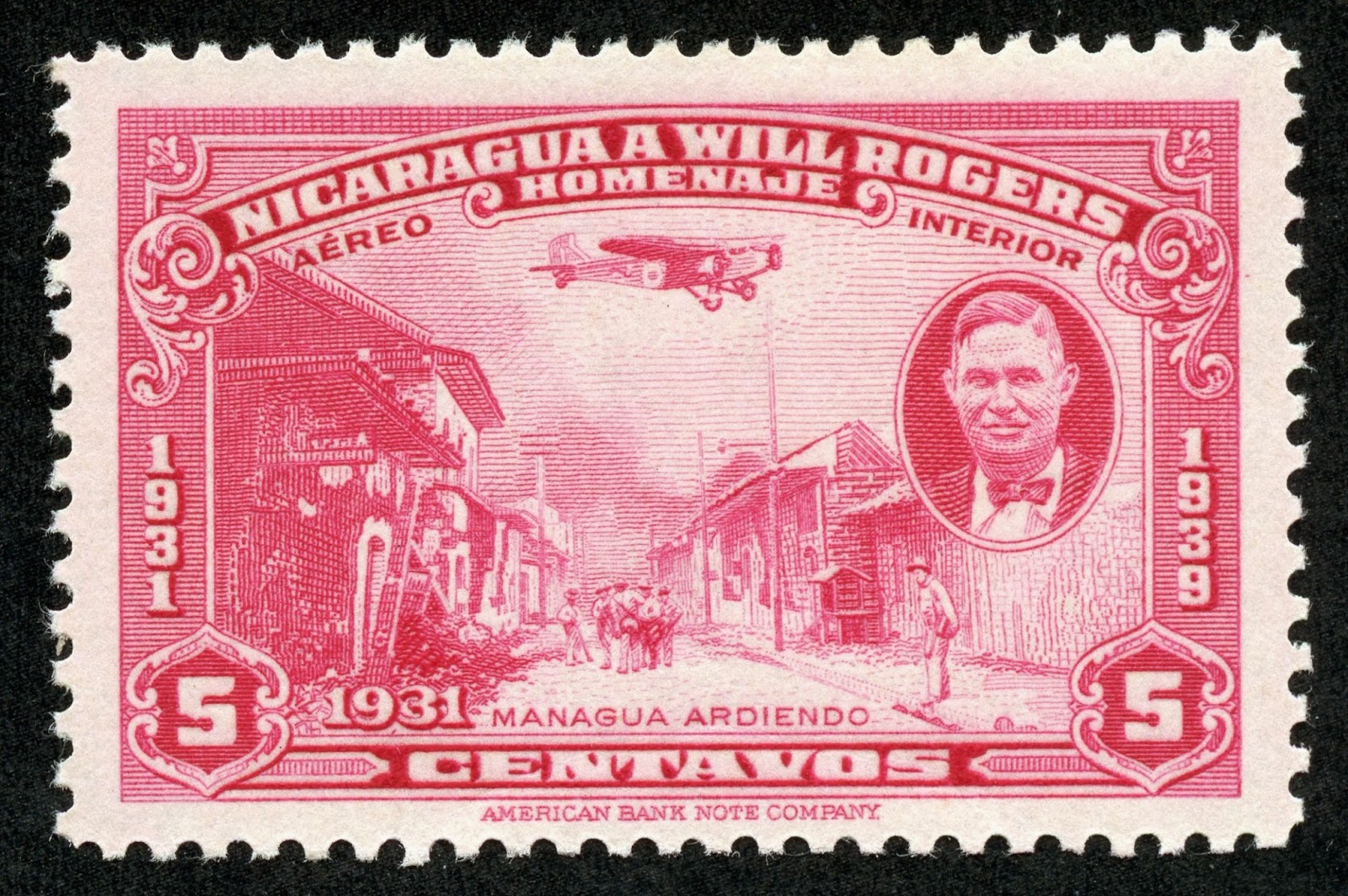 1939 Scott C240 5c rose carmine
"Will Rogers and Managua after Earthquake"
For Domestic Postage
After the earthquake of March 31, 1931, Will Rogers flew his plane there to gather support for the country. A five stamp issue was produced in 1939 in honor of the event. 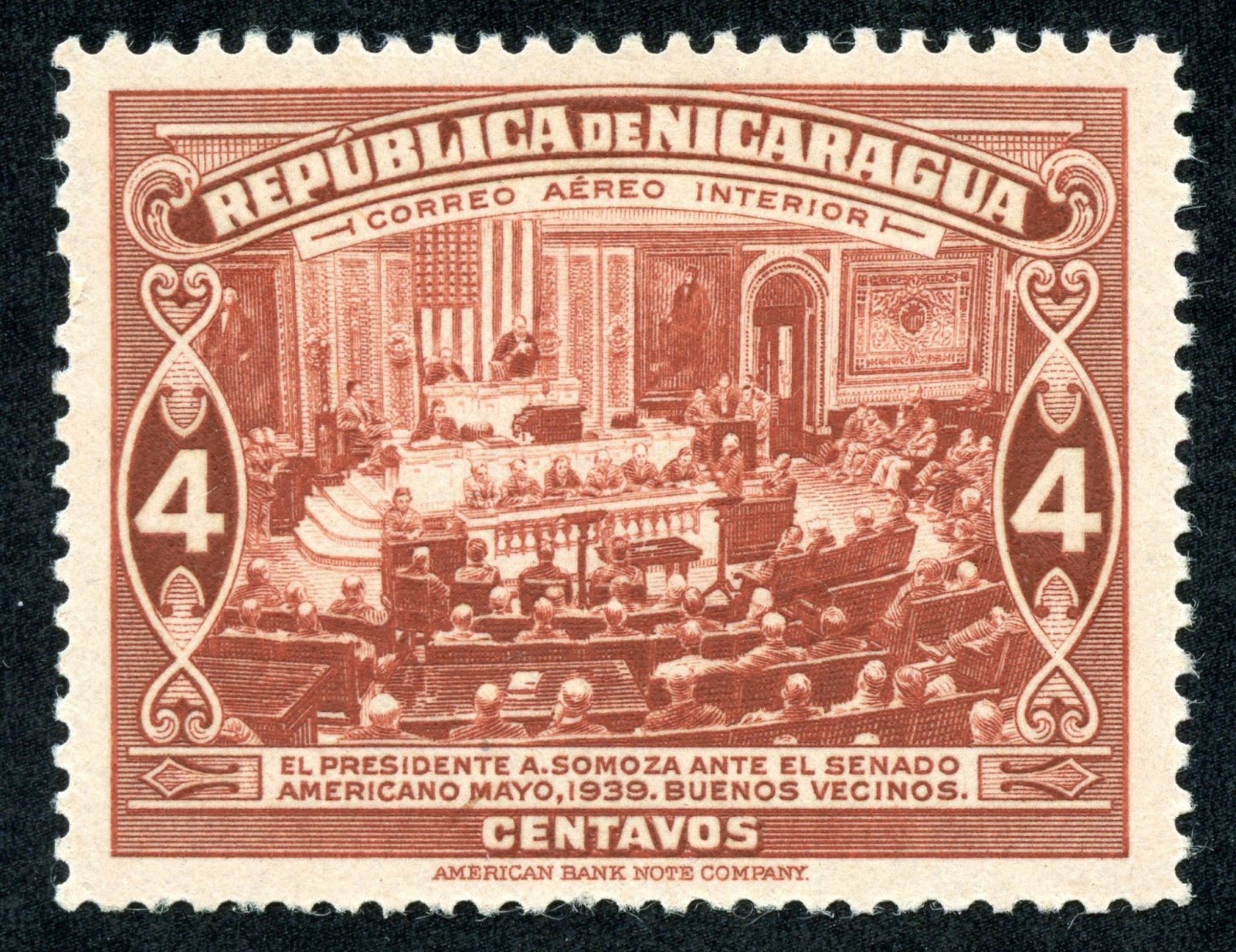 1940 Scott C241 4c red brown
"Pres. Somoza in U.S. House of Representatives"
For Domestic Postage
The strongman President Somoza visited the United States in 1939. President Roosevelt is reputed (probably apocryphal) to have said "Somoza may be a S.O.B., but he is our S.O.B". 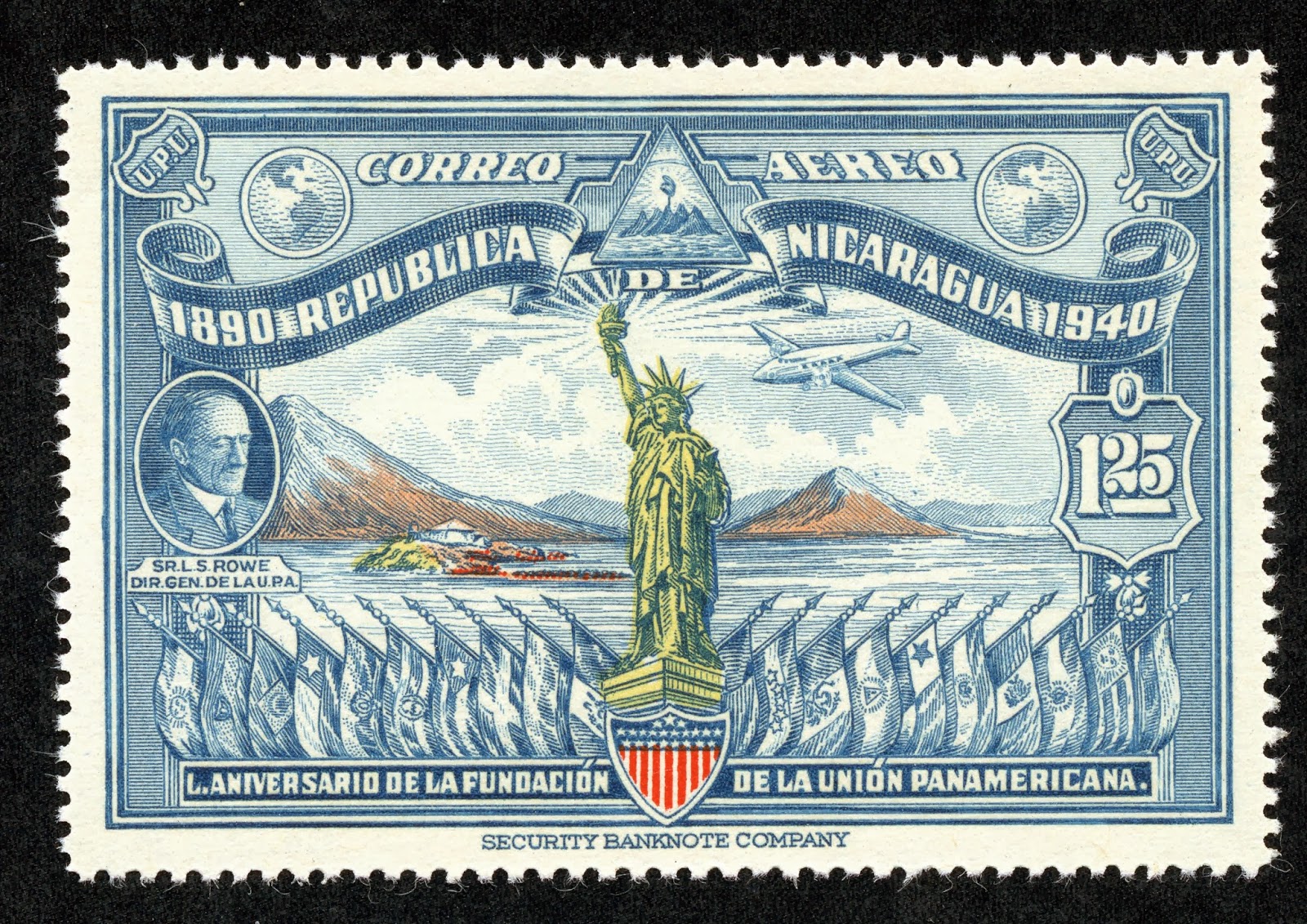 This stamp has something for everyone...
L.S. Rowe, Statue of Liberty, Nicaraguan coastline, Flags of 21 American Republics, U.S. Shield, and Arms of Nicaragua. 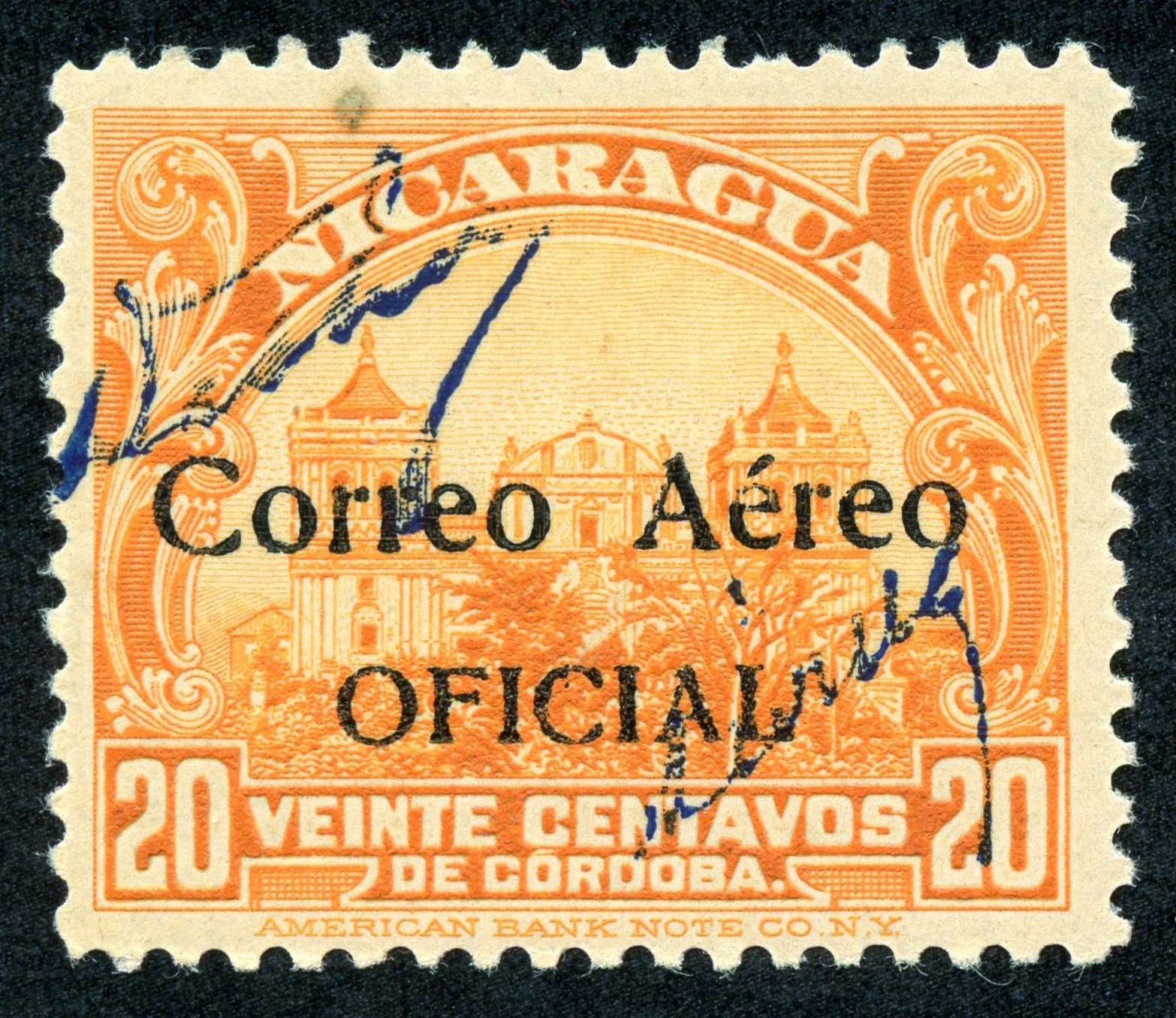 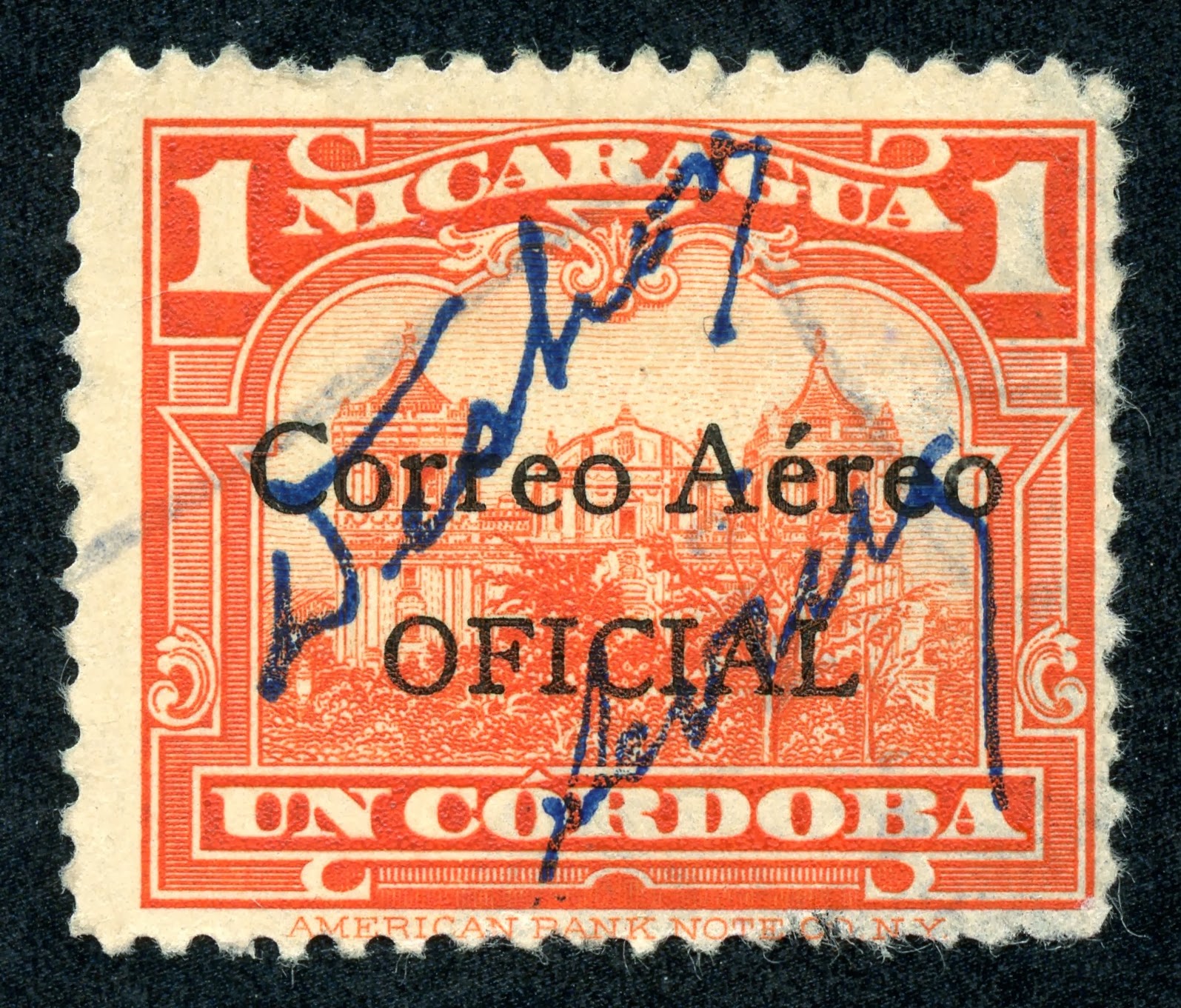 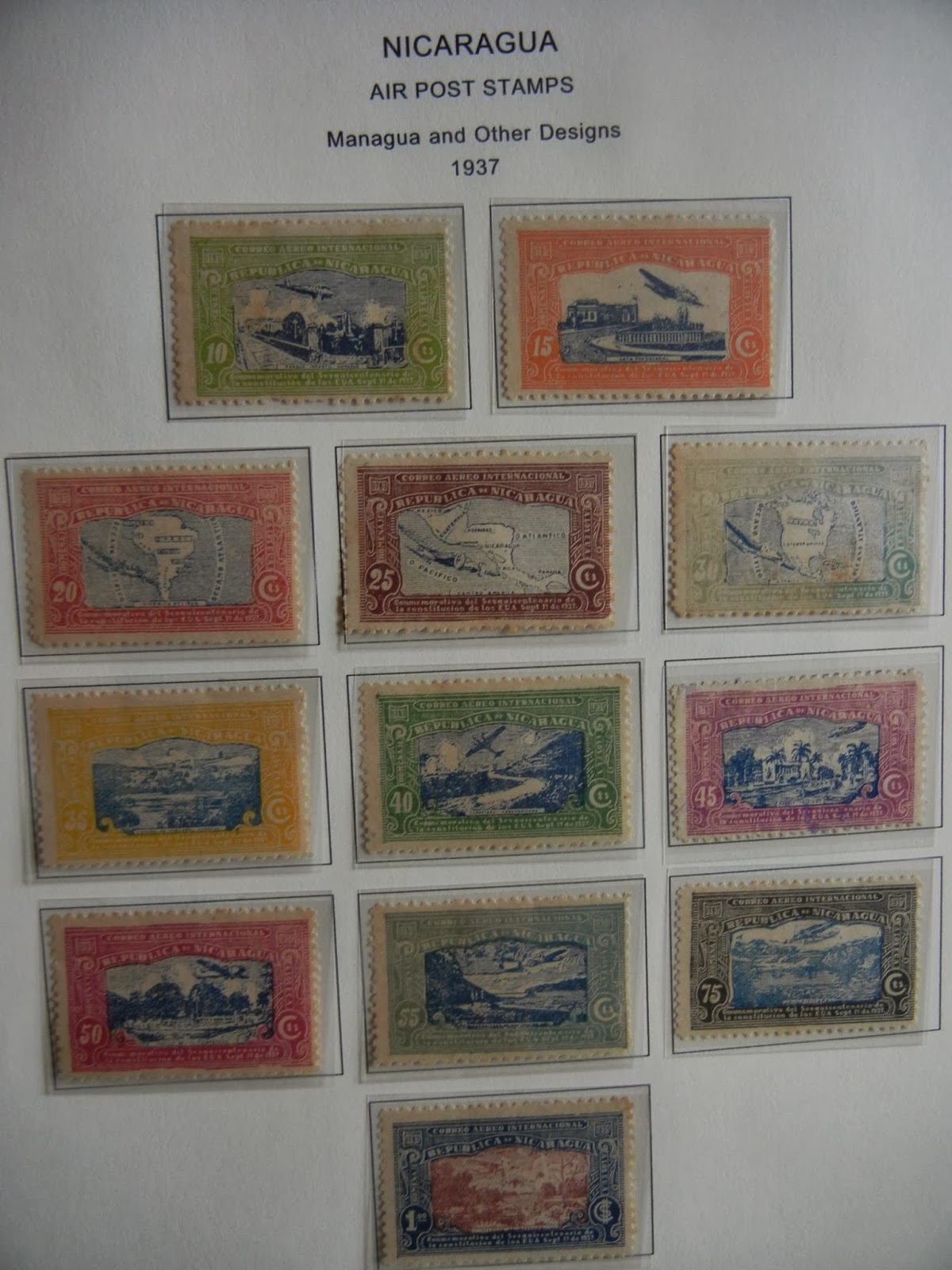 An advantage certainly of a comprehensive album such as Deep Blue (Steiner) is any stray Nicaraguan stamp without a space in BB will have one here. And, although BB has a very generous 569 spaces, there are many affordable stamps that are left out. Of course, that does mean 115 pages coverage in Deep Blue. ! Pick your poison. ;-) 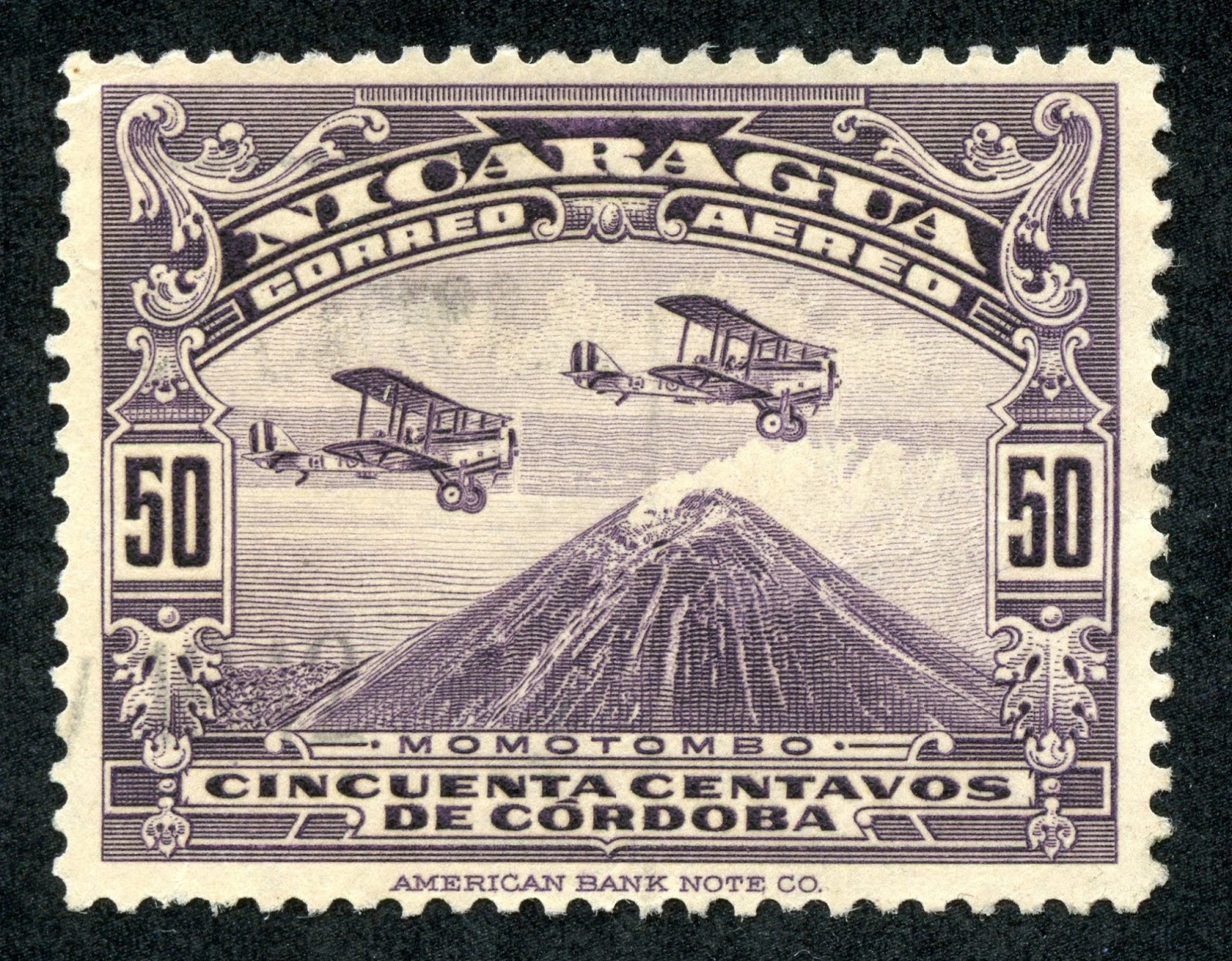 1937 Scott C167 50c violet
Momotombo Type of 1929
Big Blue
Since I already covered Big Blue in the first post, it might be instructive to take a look at the top twelve countries for spaces in the '69 Big Blue for reasons that will become obvious soon. 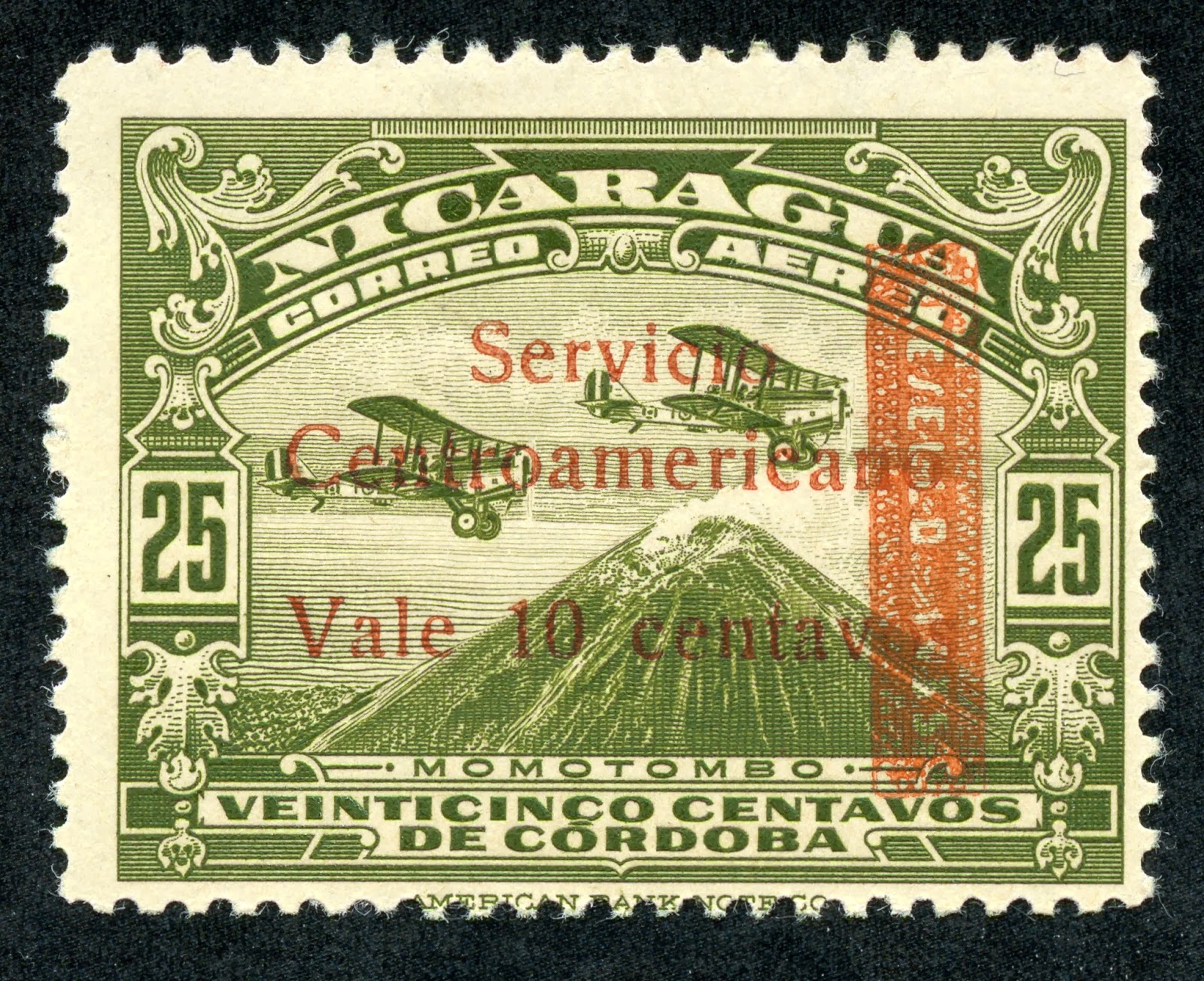 1936 Scott C145 10c on 25c , Red overprint reading down
On 1935 C111 10c on 25c olive black
Out of the Blue
I hope you enjoyed this little excursion into the Air Post stamps of Nicaragua, which should give you a flavor for the country.