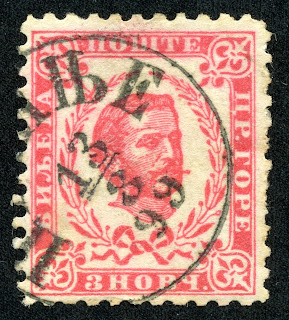 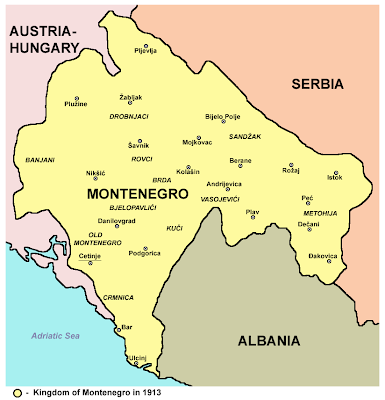 Montenegro after the Balkan Wars in 1913

Montenegro formed a secular Principality in 1852. In 1860, Nicholas I began a long reign as Prince, then King, until his exile to France in 1918.

Nicholas I was a skilled ruler and diplomat, and Montenegro enjoyed a large degree of stability and prosperity under his leadership.

He agreed to a constitution in 1905, and allowed more press freedoms and criminal law reforms. 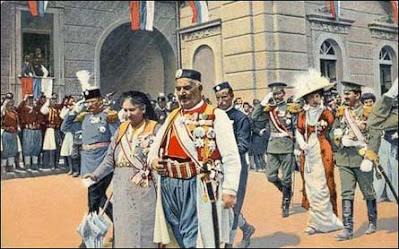 Proclamation of the Kingdom of Montenegro 1910
In 1910, during the celebration of his jubilee, Nicholas assumed the title of king.

He actively supported the 1912 Balkans Wars, as he wanted the Ottomans completely out of Europe.

He was a active supporter of Serbian unity, but he was bitterly opposed to Karadordevic rule (Peter I, King of Serbia 1903-1918).

Montenegro was a supporter of the Allied Powers during WW I.  But, between 1916-18, Montenegro was occupied by Austria-Hungary, and Nicholas I fled to Italy, then France. (Occupation stamps were issued by Austria in 1917-18.) When the Allies liberated Montenegro, the Podgorica Assembly voted to ban Nicholas I from returning, and voted to join the country with the Kingdom of Serbia.

Montenegro then united, under the general rule of King Peter I of Serbia (1918-21), to form the Kingdom of Serbs, Coats and Slovenes (renamed Yugoslavia in 1929).

Nicholas I went into exile in France, continuing to claim his throne, until his death three years later. 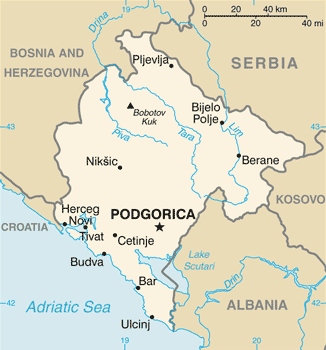 Montenegro Today
Montenegro became part of Yugoslavia, which eventually broke apart in 1992. Montenegro remained joined in federation with Serbia until 2006, when it became fully independent. 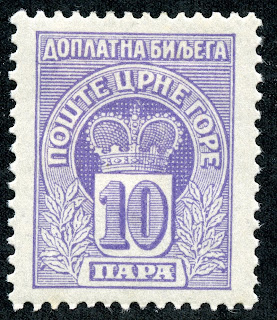 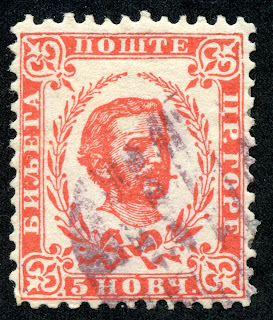 1879 Middle Printing Scott 10 5n red "Prince Nicholas I"
The portrait of the Prince, Nicolas I, naturally, was on the stamp issues of 1874-1893. There were seven different denomination stamps in the issue, each with their own color.

The printing differences lie not with the image itself, but other variables- namely perforation, pointed teeth or broad teeth, and narrow spacing ( 2-2 1/2 mm)  or wide spacing (2 3/4- 3 1/2 mm) between stamps. Scott's color description is sometimes different, as well.

As it is a bit complicated with all the variables, consult the Scott catalogue directly when working through these issues.

The stamp above- the 5n red, with perforation 12 and narrow spacing, appears to be a middle printing. 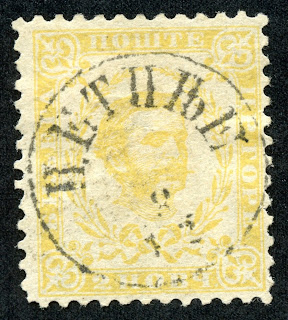 1893 Late printing Scott 15 2n yellow "Prince Nicholas I"
The Perf 11 1/2 small holes and broad teeth  is compatible with a late printing, and so this 2n yellow is placed there. The CV for the late printings range from $1+-$2+. 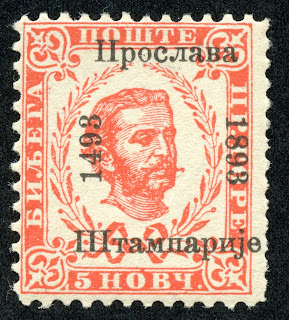 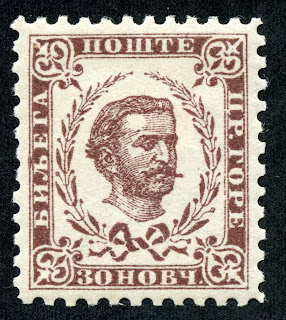 1894 Scott 41 30n maroon
Between 1894-98, a thirteen stamp set with the same portrait of Prince Nicholas I was issued in new colors and with some new denominations. These lovely stamps can all be had, as well as essentially all the later issues, at close to minimum catalogue value.

Although I don't have any examples, I should mention that the preceding issues were forged by the Spiro Brothers in Hamburg, Germany. A marker is the Cyrillic character that resembles two capital "I"s on the right side panel touch each other on the left end in the genuine, but does not touch in the forgery. Also most Spiro forgeries have a bogus cancel of four concentric circles. 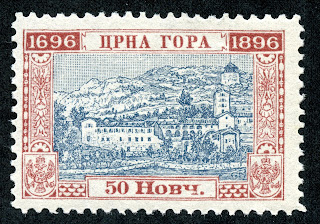 For the bicentenary anniversary of the ruling dynasty, a lovely bi-color twelve stamp pictorial set showing the Royal Mausoleum was issued in 1896.

Although today valued close to minimum, this set too was forged- this time by Francois Fournier of Geneva, Switzerland.

Markers....
• Genuine is perf 10 1/2 or 11 1/2; Forgery is perf 11 1/2
• The eagle in the bottom left corner: The genuine has a tiny cross over the heads of the double eagle, while the forgery does not.
• Most forgeries are cancelled with a Cyrillic Cetinje postmark.

Note: For illustrations of the forgeries described in this post, see "Focus on Forgeries"- Varro Tyler 2000. 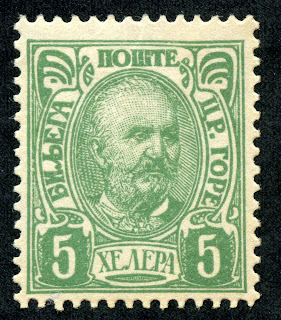 1902 Scott 59 5h green "Prince Nicholas I"
In 1902, a nine stamp set was released with this portrait of Prince Nicholas I. What I find remarkable is the  visage of the 61 year old Prince. Stunning realism. 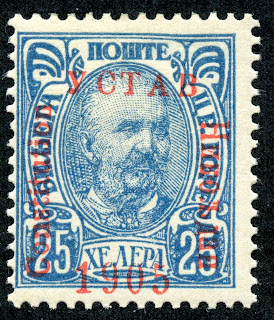 1905 Scott 70 25h dull blue
Constitution issue- 15mm
Remember I briefly mentioned that Prince Nicholas permitted a constitution for his country in 1905? This was cause for an overprinted nine stamp "Constitution" 1905 issue to celebrate the occasion. The overprint is found in red or black, and the left vertical script "Constitution" is 15 mm long. 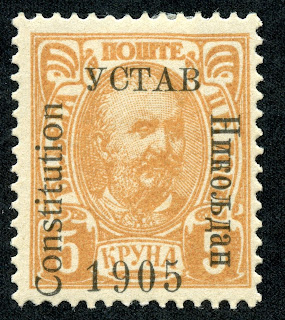 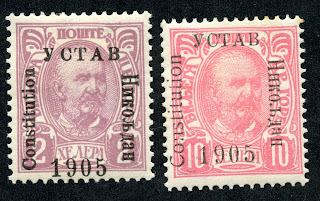 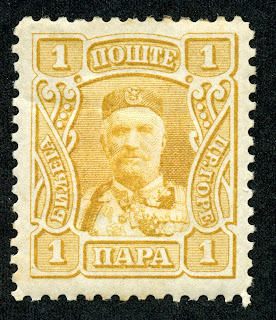 1907 Scott 75 1pa ocher "Prince Nicholas I"
In 1907, another portrait issue of Prince Nicholas I was released with 12 stamps in the set. The 66 year old monarch looks very much his age. ( I guess someone could say the same thing about me ;-) 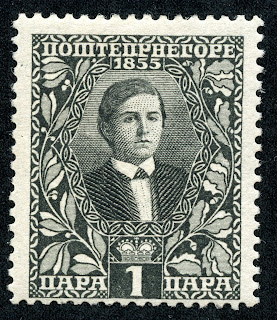 1910 Scott 87 1pa black
"King Nicholas I as a Youth"
1910 was the jubilee year for Nicholas I - 50 years on the throne! And Nicholas assumed the title of King, and his country became a kingdom. A wonderful- and remarkably inexpensive even today- twelve stamp issue with seven portraits of the king in various stages of his life was released. Here is a portrait of the king as a youth- age 14. 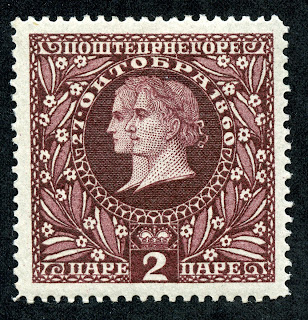 1910 Scott 88 2pa purple brown
"King Nicholas I  and Queen Milena"
Most remarkably, 1910 was also the golden wedding anniversary of Nicholas I and (now) Queen Milena. Here is their portrait in 1860 - he 19 years old- at the beginning of their marriage and their reign. There is a photograph of them in 1910 which I show in the "Quick History" section. You might want to compare. ;-) 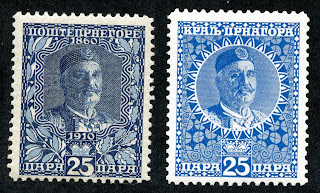 The 1913 issue was the last regular issue for Montenegro, although there are 1917-18 Austrian overprinted occupation stamps, using 1917 Austrian Military stamps, found in the catalogue. 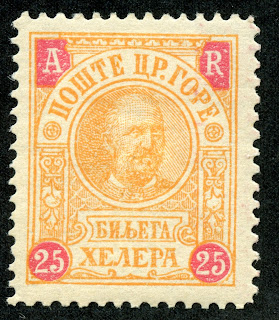 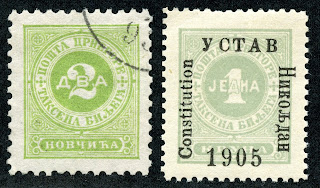 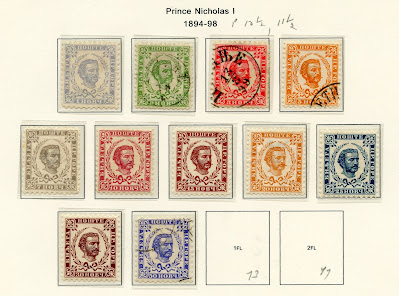 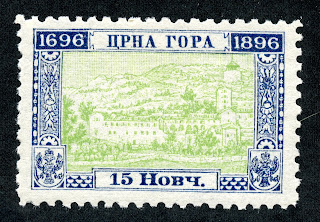 Observations...
• There are no stamps over $10 CV in BB.
• For the 1874-93, with the early, middle, and late printings, BB has just one space.
• There are some changes in color descriptions between BB and the current Scott catalogue. See the "Comment" section for specifics. 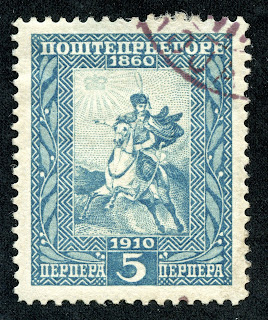 1910 Scott 98 5per pale blue "Prince Nicholas"
Out of the Blue
Most of the Montenegro stamp issues had to be abundantly supplied to the philatelic trade, as the CV for these stamps some 117-100 years later is at minimum. Remarkable.

But the stamps themselves are well designed and lovely. Truth be told, in the philatelic world, there is generally little correlation between a stamps's intrinsic beauty and it's catalogue value.

Here one can have beauty at rock bottom prices.