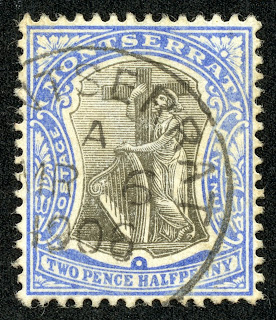 1903 Scott 15 2 1/2p ultramarine & black "Symbol of the Colony"
Quick History
Montserrat, one of the five presidencies of the British Leeward Islands colony during the classical stamp era, is part of the West Indies archipelago. It is located  300 miles east-southeast of Puerto Rico and 30 miles southwest of Antigua.

Montserrat in the Caribbean Sea
Montserrat (10 miles by 7 miles) was named by Christopher Columbus in November, 1893, after the Monastery of Montserrat in (now) Spain.

The English, though, had control of the island by 1632, and Montserrat became known as "The Emerald Isle of the Caribbean": partially for its lush greenery, but more because the Irish were transported there as slaves, servants, and prisoners. 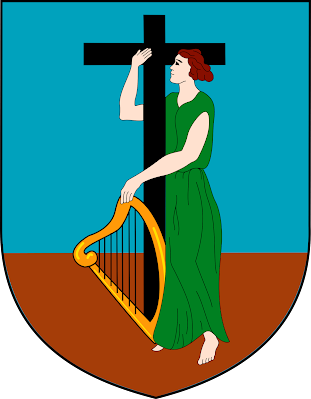 After the initial influx of Irish labor, African slaves were imported for the plantations and production of sugar, rum, arrowroot and cotton. Later, lime trees were planted.

Montserrat used their own stamps from 1876-1890; then the stamps of the Leeward islands were exclusively used. Montserrat stamps were resumed in 1903, along with the concurrent use of Leeward island stamps, until 1956. 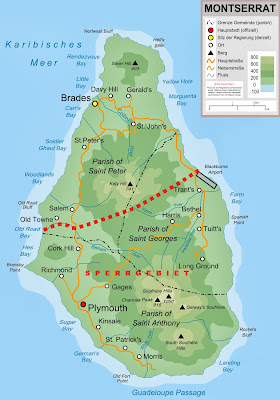 Montserrat and the exclusion zone
The population of Montserrat was 12,000 (1942), and the Capital was Plymouth.

I say "was", because more recent climatic and geographical events have occurred.

• Hurricane Hugo struck in 1989, damaging more than 90% of the structures on the island.
• The previously dormant Soufrière Hills volcano became active in 1995, and destroyed the capital city of Plymouth. 8,000 people have left the island (primarily for the U.K.), and the population today is only 5,000. The southern half of the island is in an exclusion zone, and only the northern half is now inhabited.

Montserrat continues to be a British Overseas Territory. 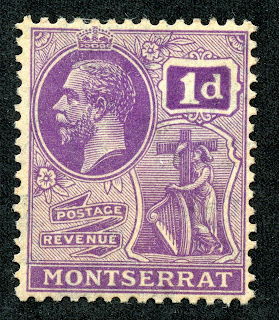 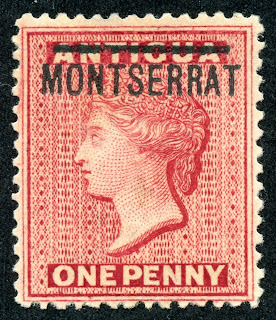 1876 Scott 1 1p red "Queen Victoria"
Stamps of Antigua Overprinted in Black
The first stamp for Montserrat was borrowed from the 1873 Antigua 1p lake, which was then overprinted. An overprinted 6p green was also issued. Antigua, 30 miles from Montserrat, was the more populous.

Note that Scott labels the color "red" for Montserrat, but "lake" for Antigua, even though, by presumption, the same stamp. The WW classical collector needs to take the color labeling in the catalogues with a grain of salt. 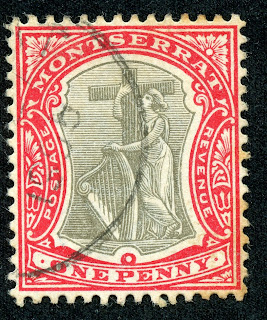 1903 Scott 13 1p carmine & black
"Symbol of the Colony",wmk 2
There were some "Queen Victoria" stamps issued between 1880-84, but we will pick up the issue thread with the 1903 "Symbol of the Colony" designed stamps. This nine stamp issue introduces the colony motif, as discussed in the "Quick History" section. Lovely, no? These had the "Crown and C A" watermark. 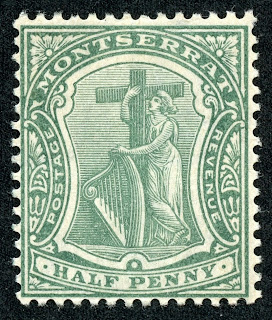 By the way, there is also a high value- the 5sh carmine & black that is printed in large format with "King Edward VII", for the preceding two issues. With a CV north of $100, please send me one if you have duplicates. ;-) 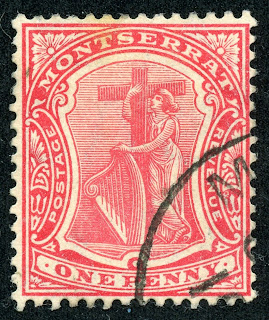 1908 Scott 32 1p carmine
"Symbol of the Colony", ordinary paper
Then, between 1908-13, some eleven stamps were printed as the preceding two issues, but in different colors. These can be found on ordinary (lower values) or chalky (higher values) paper. This issue is also wmk 3. Regarding paper, the only stamp one has to differentiate in the issue is the 3p violet/yellow, which is found in both chalky and surface-colored paper varieties. 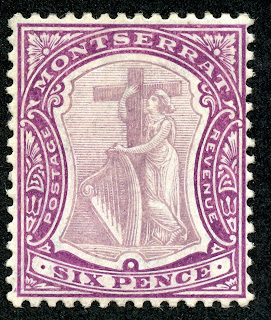 1908 Scott 36 6p red violet & gray violet
"Symbol of the Colony", chalky paper
Above is an example of the 1908-13  issue on chalky paper.  One must admit that the typographed design is stunning when enlarged and viewed on a monitor. 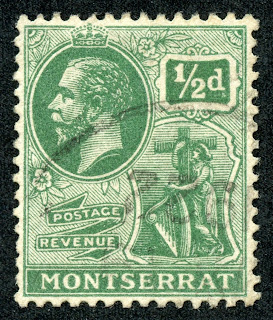 1916 Scott 43 1/2p green
"King George V", wmk 3
Between 1916-22, an eleven stamp set was released with "King George V" portrait embedded. Fortunately, Montserrat kept its individuality with the "Symbol of the Colony" image also found on the stamp. Think how more attractive the British colony stamps would be today for today's collectors if more of them did not have the generic "key plate" design! 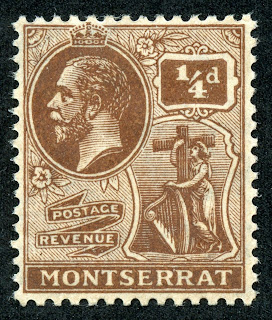 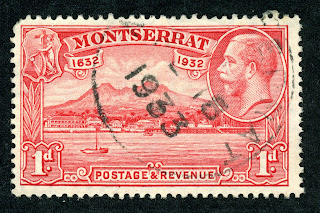 1932 Scott 76 1p red "New Plymouth and Harbor"
Tercentenary Issue
For the 300th anniversary of the colonization of Montserrat in 1632, a 10 stamp set with this design was released. As is typical for many British colonies, the lower denominations are affordable (<$1-$1+), while the higher denominations require wallet opening ($10+-$100+). If one is collecting classics WW, one may need to be resigned to more empty spaces in the British colonies if an eye is kept on the budget. 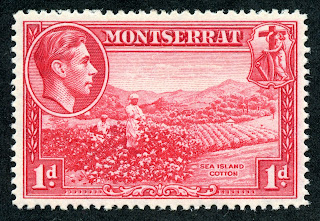 1942 Scott 93 1p carmine "Sea Island Cotton"
In 1938, a ten stamp "George VI" pictorial with three designs was released- all with perforation 13. Then, in 1942-43, the stamps were released again, but with perforation 14. My 1947 Scott catalogue notes the different perforations, but only assigns one major number for each denomination. But the 2011 Scott assigns the 1942-43 perforation 14 stamps, which have a lesser CV, with the major numbers, and gives minor numbers to the 1938 perforation 13 issue.

If one is collecting with BB, and want to be obsessive about specified dates, one will need to put the more expensive (($10+-$20+ for six stamps) minor numbers into the album. Me?- I'm not that obsessive. ;-) 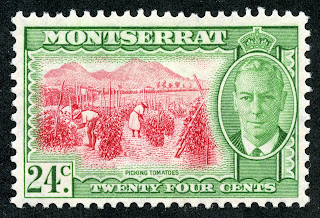 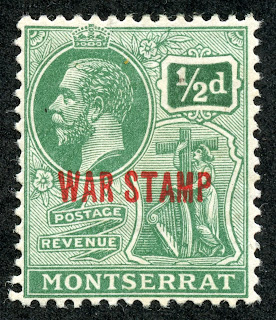 War Stamp 1917 Scott MR1 1/2p green
Overprinted in Red
Montserrat had three stamps issued for war tax, and this one is the 1/2p green with the red overprint. There is also a black overprint stamp, and one that is orange & black in color- shown elsewhere in the post. 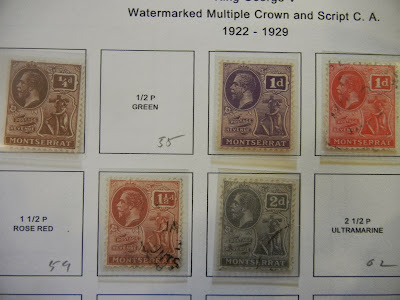 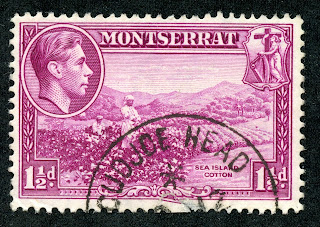 Observations
• Only one stamp crosses the $10 threshold, and none the "Most Expensive" ($35) threshold.
• The "1938" pictorial series is interesting, because Scott now gives the perforation 14 stamps the major number. These were actually issued in 1942-43. The 1938 perforation 13 issue is given a minor number. The 1938 issue is also more expensive, with four stamps @ $10. One can, of course, put in either variety, because, if a minor number is eligible, the major number is eligible for the space also.
• One can complain a bit about the stamps not put into BB- the three 1918 War Tax stamps ( <$1) for instance. There is plenty of space to add more stamps on the second page. ;-) ( I note that a War Tax space was dropped by the '69 editors.) 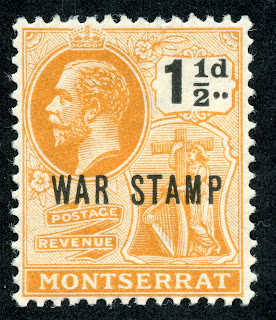 War Stamp 1918 Scott MR3 1 1/2p orange & black
Out of the Blue
The Leeward Islands stamps, proper, are all "key plate" designs, as they could be used on any of the islands. But, happily, the individual island colonies- here Montserrat- generally keep more of their own identity. That may be, at least, one of the reasons that the British West Indies stamps are popular- and more expensive.