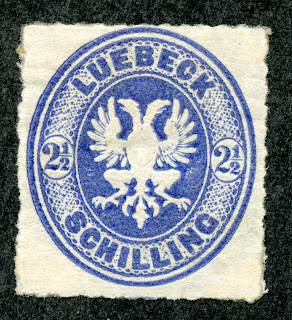 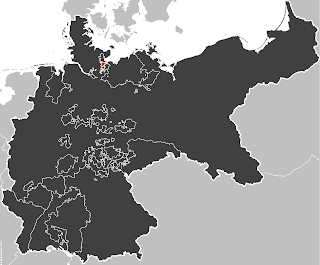 Location of Lübeck (red) within the German Empire
On the river Trave, a port city on the arm of the Baltic Sea in northern Germany, Lübeck was, for several centuries, the "Queen" and "Capital" of the  powerful medieval trade organization, the Hanseatic League.

In 1226, Emperor Frederick II declared Lübeck to be an Imperial Free City. 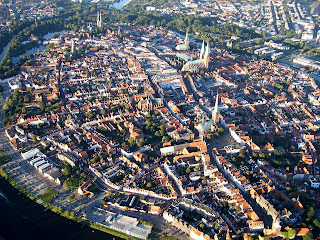 Old town Lübeck
In 1375, Emperor Charles IV included Lübeck as part of the five "Glories of the Empire", along with Venice, Rome, Pisa, and Florence. 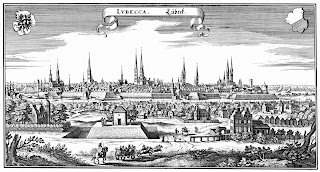 Lübeck in 1641
In 1811, Lübeck was annexed as part of the Napoleonic French Empire, but regained its free status under the Congress of Vienna in 1815. 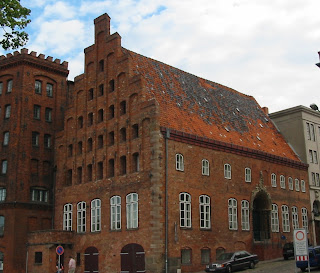 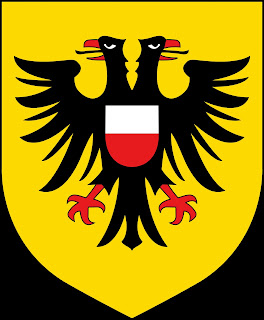 "Coat of Arms" for Lübeck
Stamps were issued through 1865. When Lübeck joined the North German Confederation on January 1, 1868, its own stamp production ceased. Subsequently, Lübeck became a member of the German Empire in 1870.

The governance independence of the Free City of Lübeck came to an ignominious end in 1937, when the Nazis incorporated almost all its territory into Schleswig-Holstein.

By way of food trivia, Lübeck is famous for its marzipan, and Rotspon wine. 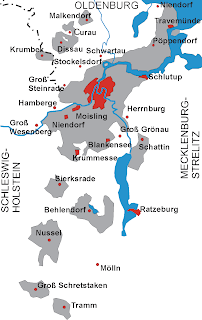 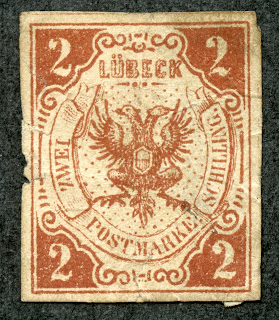 1859 Scott 3 2s brown "Coat of Arms"
Lithographed, Imperforate, wmk 148
The initial issue for Lübeck consisted of 5 denominations, and was imperforate. The stamps were lithographed. They show nicely the "double eagle" coat of arms. This particular rather rumpled and torn 2s brown illustrated stamp appears unused (CV $10+). A genuine used specimen has a CV of $200. ! I checked the Serrane, and this stamp does not appear to be a "Geneva" forgery or a (rare) reprint.

The watermark is "small flowers" (wmk 148). I believe I detected the watermark, but not enough to show a picture. ;-) 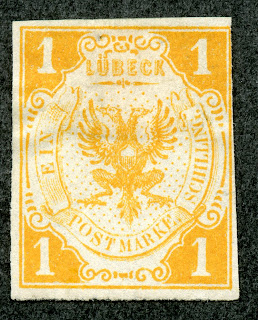 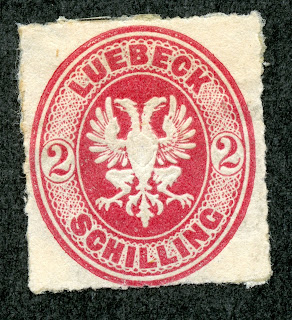 So are there any other "forgery" caveats with this issue? Not really, but I still got snookered. 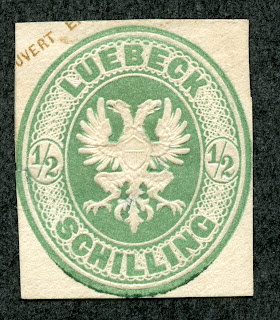 1/2 Schilling cut square
Note the "Couvert" = Envelope script
I bought a small lot of Lübeck stamps. In the included lot was supposedly the 1863 Scott 8 1/2s green. What I received is shown above. Note it appears imperforate, while these specimens should be rouletted. But the real clue is "uvert" in the left upper corner? That is "couvert", which means envelope. Yes, I received a cut square. ;-( 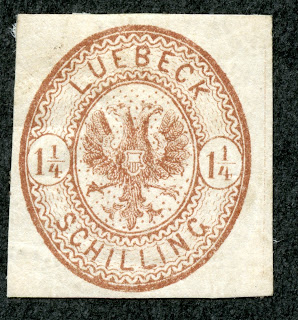 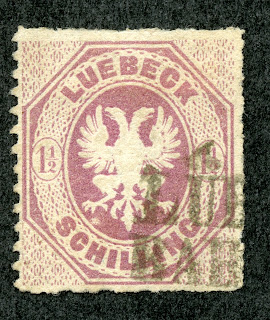 1865 Scott 14 1 1/2s red lilac
Rouletted 11 1/2, "Eagle embossed"
In 1865, another single stamp was released, this time with embossing. I checked the Serrane guide again, and this appears to not be a "Geneva" forgery. The reprints are imperforate, and without embossing. 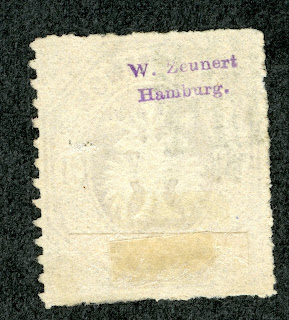 Back of Scott 14 with expert mark
Not unusual with the classic central European stamps, is to find an "expert mark" on the stamp reverse. I looked up "W. zeunert" at this excellent site, and, sure enough, he is a "recognized expert" from Hamburg.
Reassuring, but probably not the last word. ;-)

Deep Blue
Lübeck in Deep Blue (Steiner) is found all on one page. Nice! 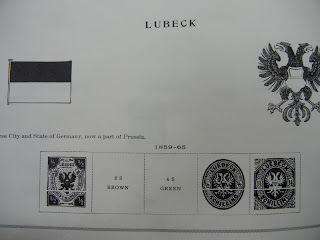 Lubeck in the '47 BB edition
Big Blue
As mentioned, Lübeck lost its place with the '69 edition.

But, reviewing the '47 edition, Lübeck has one line, sharing the page with Lourenco Marques.

As far as selection, the choices are certainly reasonable. But the 1863 embossed issue is represented by the 1/2s green (CV 30+), rather than the less expensive 2s rose (CV $20).

All choices are less expensive mint. 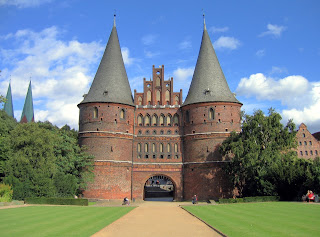 Holstentor in Lübeck
Out of the Blue
Unlike some of the other German States reviewed previously, I was lucky enough this time to have neither forgeries or reprints. Although one cut square did sneak in. ;-)

Note: maps, pictures appear to be in the public domain