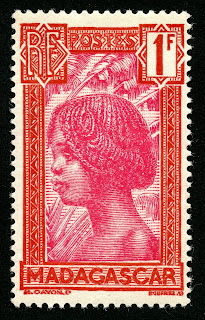 1938 Scott 162 1fr dark red & carmine rose
"Hova Woman"
Quick History
Madagascar is the fourth largest island in the world, and is located off the coast of southeastern Africa. More importantly, Madagascar detached from India 88 million years ago, and consequently 90% of the wildlife is found nowhere else. 615 orchid species, 165 palm species, and 6 of the iconic baobob tree species are endemic to Madagascar. And lemurs, rather than monkeys, are found there.

Madagascar in the Indian Ocean off the coast of Africa
The Malagasy people who now inhabit Madagascar arrived from South Borneo by outrigger canoes up through the sixth century.

But the French, in the scramble for Africa, beat out the British and established a protectorate in 1885 in a rather strong-armed way (Franco-Hova Wars).  And, finding continued Native resistance, they exiled Queen Ranavalona III to Reunion island, then Algeria, and dissolved the Merina monarchy. 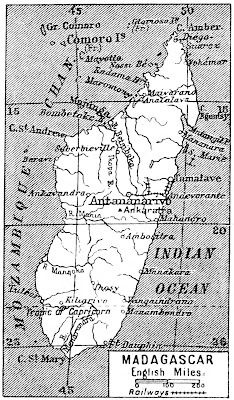 Madagascar was considered a French overseas territory until 1958. Full independence was gained in 1960. 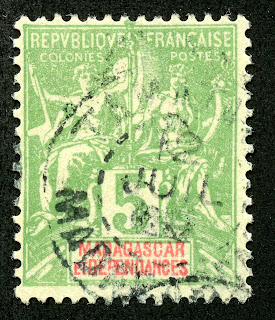 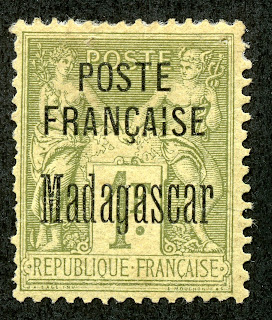 1895 Scott 21 1fr bronze green
Stamps of France 1876-90, overprinted in red or black
As mentioned, the "French Protectorate" year stamps are rather expensive, but I do have this example. They consist of French stamps issued from 1889-1896, most with various overprints or surcharges. Kind of fun to dabble in the specialist's realm. ;-) 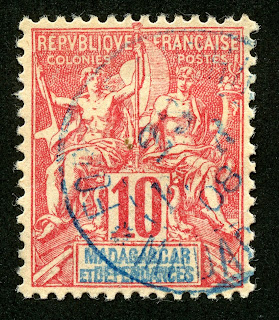 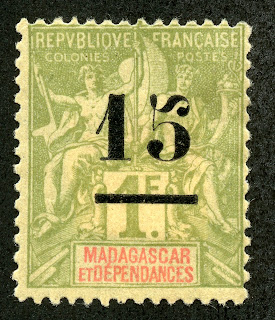 1902 Scott 50 15c on 1fr olive green/straw
In 1902, there must have been a shortage of lower denomination stamps, as some 15 stamps were surcharged in various ways. Interestingly, four of the stamps were actually surcharged on stamps of Diego- Suarez. ( I don't have any of those). 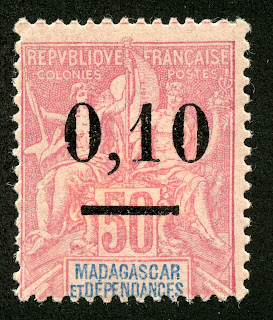 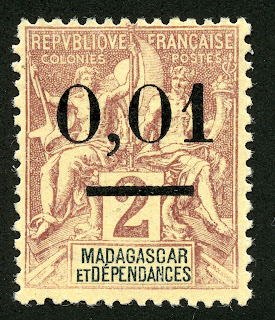 I really never tire of the French "Navigation and Commerce" varieties. :-) 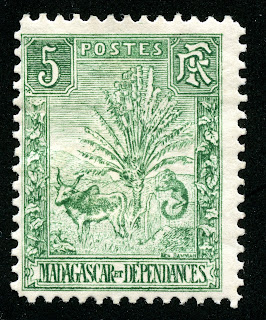 1903 Scott 66 5c yellow green
"Zebu, Traveler's Tree, and Lemur"
Perhaps, as an early recognition of the interesting species found on Madagascar, this design was used for the first issue intended for the colony. The 1903 production had 15 stamps with a CV of $1-$5 for 9 stamps.

Madagascar's lemurs are iconic.  The "Traveler's Tree" is endemic, and is so named as rain water will accumulate in the leaf bases, and can serve as an emergency supply. The zebu is found in pure form in Madagascar. 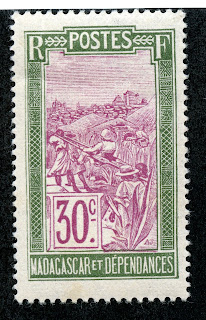 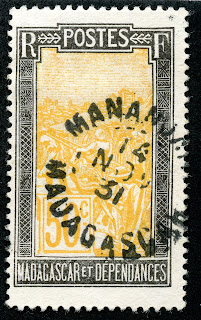 1925 Scott 104 50c black & orange
One of the joys of collecting is finding interesting postmarks. I set up a separate quadrilled page for this issue with town cancellations. 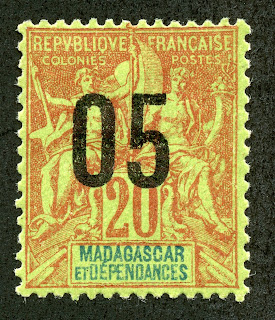 1912 Scott 116 5c on 20c red/green
Issue is found  surcharged in carmine or black
1912 saw many French colonies with surcharges as above. Four of the surcharged stamps for Madagascar are on the "Navigation & Commerce" design. (CV <$1-$8)

Of note, the surcharged 1912 "Navigation & Commerce" issue can be found with Madagascar postmarks, but on Anjouan, Grand Comoro Island, Mayotte, and Moheli stamps. These "Dependances" stamps could also be used in Madagascar. 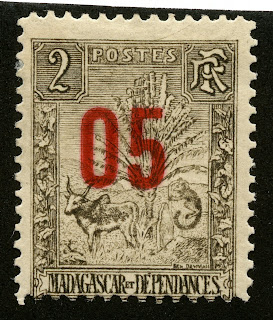 1912 Scott 119 5c on 2c olive brown
Carmine surcharge
Madagascar's own design was used for six surcharged stamps. The surcharge can be found in black or carmine. CV ranges from <$1-$5+. 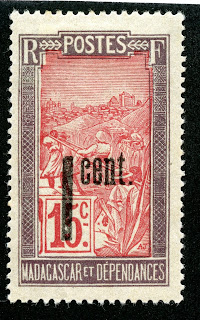 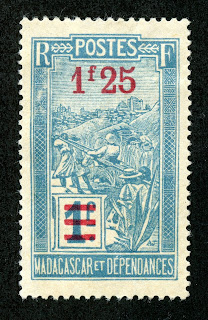 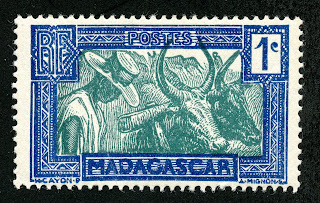 1933 Scott 147 1c dark blue & blue green
"Hova with Oxen"
Between 1930-44, the colony introduced a new issue with four designs featuring natives. These, in my opinion, are really lovely stamps. The French have a way!

Five stamps have a design showing "Hova with oxen".

"Hova" initially applied to all the Malagasy people found in the highlands of Madagascar. But during the Kingdom of Madagascar era (pre-colonial), they were the free commoners, as opposed to the Andriana (nobles) or Andevo (slaves). During the colonial period, the "Hova people" were also known as Merina. 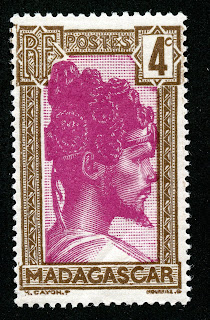 What a gorgeous typographed stamp! And only the French would combine dark brown & violet. :-) 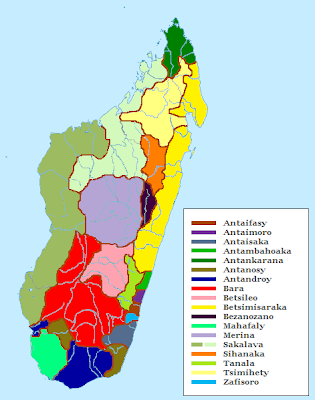 Ethnic groups of Madagascar
The Sakalava, meaning "people of the long valleys" occupy the western edge of  Madagascar, and are different than the highland Merina (Hova) discussed earlier. 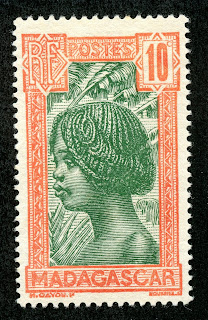 1930-44 Scott 151 10c vermilion & deep green
"Hova Woman"
I nominate this design as one of the top ten French stamps ever produced-seriously! Most impressive! 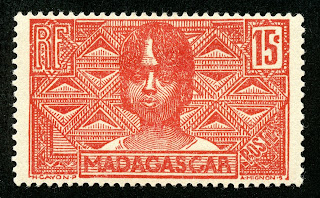 1930-44 Scott 152 15c deep red "Betsileo Woman"
The fourth and final design of the 1930-44 issue features the Betsileo, a highland tribe (pink on the ethnic map), which means "The Many Invincible Ones". The Betsileo are of Malayo-Indonesian origin, and are known for their ability at rice cultivation.

The design is found on four stamps with a CV of <$1. 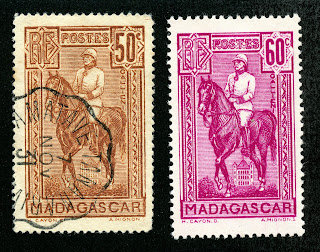 General Joseph Simon Gallieni was governor of Madagascar form 1896-1905, and was responsible for suppressing  native revolts. 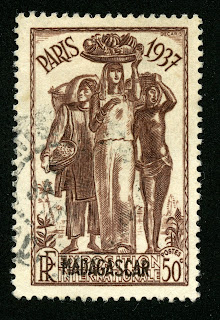 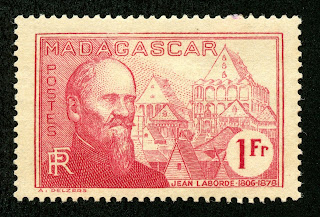 He was shipwrecked on Madagascar at the age of 26 in 1831. Making the best of it, he set up an engineering and manufacturing complex where he managed to produce iron, steel, glass, brick, cement, muskets, and textiles. A very useful man! ;-) 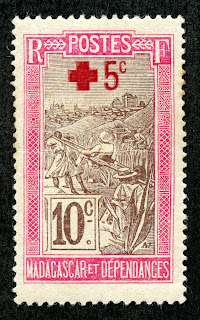 1915 Scott B1 10c + 5c rose & brown
Scott 84 surcharged in red
Not many semi-postals for Madagascar ( Seven stamps total), but here is the first 1915 issue- just one stamp- apparently for Red Cross charities. 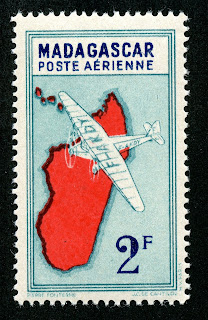 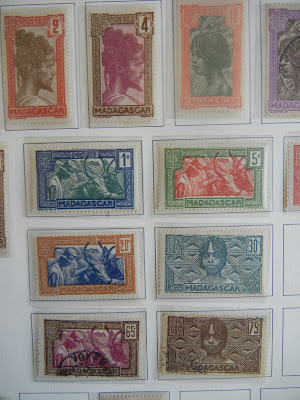 1930-44 Sakalava Chief et al issue in Deep Blue
Deep Blue (Steiner) has 23 pages for Madagascar, and follows the Scott catalogue. Interestingly. the Steiner has two pages for the surcharged 1912 issues of Anjouan (11 stamps), Grand Comoro (10 stamps), Mayotte (11 stamps), and Moheli (6 stamps) that could also be used in Madagascar. By necessity, one would need a used copy with a legible Madagascar postmark in order to fill these spaces. ;-) 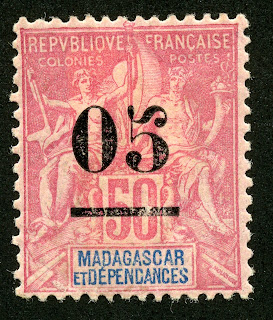 BB's layout for this issue, though, illustrates the difference between earlier album presentations and the modern Scott catalogue. The Steiner album follows the sequential numbering system of the modern catalogue, and hence, makes it easy to find the correct space. This is because the modern catalogue puts all the same denomination stamps- if there are more than one for an issue- together sequentially, and therefore the specific date of issue- (although noted in the catalogue)- is secondary. But BB rather has stamp spaces placed by the various dates of the issue.  Unfortunately, that means the numbers are more difficult to find in the modern Scott catalogue. (This also holds true for the Browns.)

• Only one stamp reaches the $10 threshold. BB's selection is inexpensive for Madagascar. 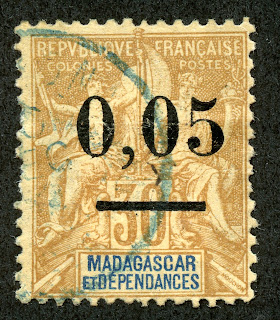 1902 Scott 52 0,05 on 30c brown/bister
Out of the Blue
Question...
Did the stamp review of a country ever make you want to visit it? For me, Madagascar is one of those countries.

Note: Maps, Baabob tree photo appear to be in the public domain.