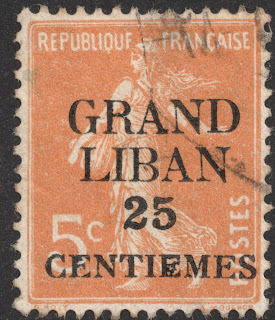 1924 Scott 2 25c on 5c orange
Stamps of France 1900-21, Surcharged
Quick History
Lebanon, on the Mediterranean between Syria and Israel, was part of the Ottoman Empire until WW I. Then it came under French mandate after the Franco-Syrian War, and Greater Lebanon was established on September 1, 1920. 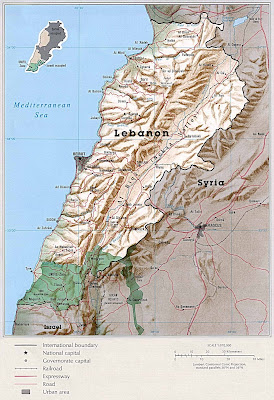 Lebanon
A mostly Christian country at the time (Maronite, Greek Orthodox), it also had areas with Muslims (including Druze). A Lebanese Republic (still under French mandate) with a constitution was established on May 25, 1926. The population was 860,000 (1935), and the capital was Beirut.

Full independence for Lebanon occurred in 1943. 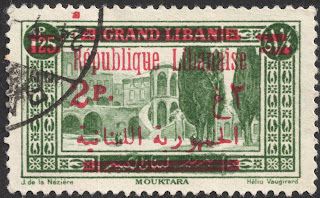 1928 Scott 103 2p on 1.25p deep green
Stamps of 1925 surcharged in red or black
Into the Deep Blue
The 2011 Scott Classic Specialized catalogue has, from 1924-1940, 294 major descriptions in the regular, semi-postal, air post, and postage due categories. Of those, 129 are CV <$1-$1+, or 44%. Although not dirt cheap, an inexpensive representative selection can be accumulated by the WW classical era collector. 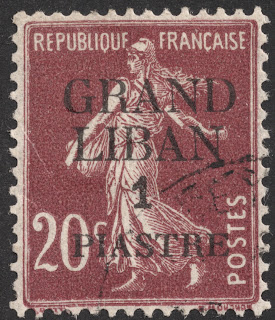 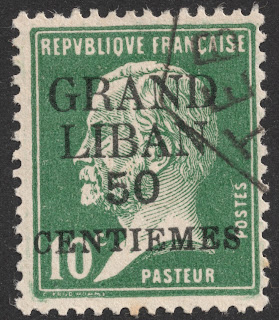 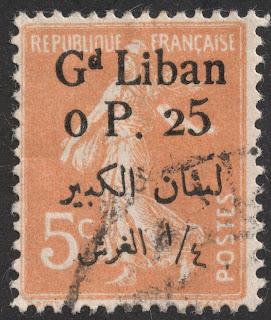 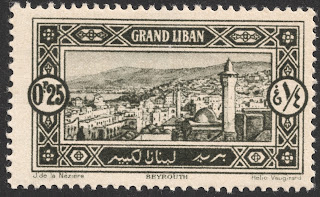 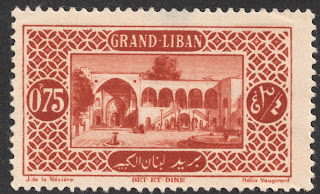 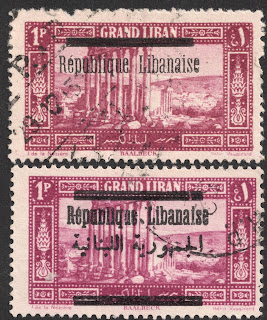 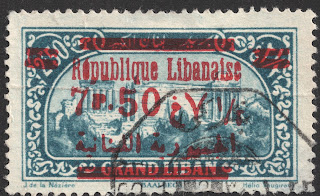 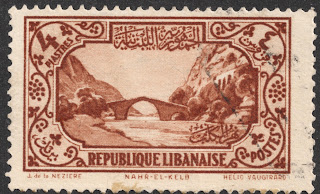 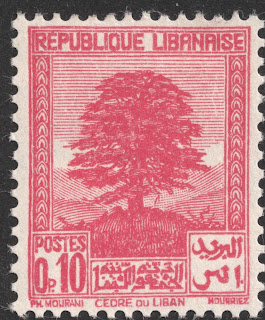 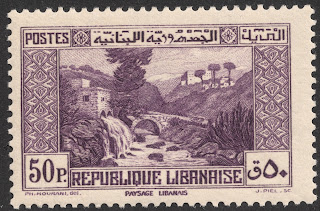 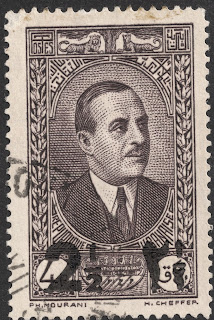 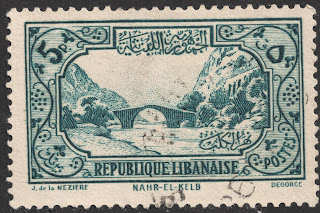 1940 Scott 155 5p greenish blue
Imprint: "Degorce" rather than "Helio Vaugirard"
The Bridge Type 1930-35 design was reissued as above in 1940 with a 5p greenish blue denomination and change in imprint as illustrated. A knockout! 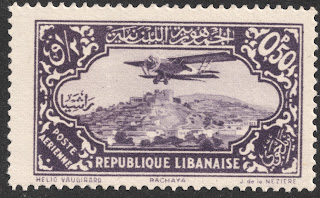 1931 Air Post Scott C39 50c dark violet "Airplane over Racheya"
There were some 33 overprinted stamps for Air Post issued between 1924-1930. Many have a higher CV ($4-$12). Some have an interesting airplane overprint. There is an example of one at the "Big Blue" section header. 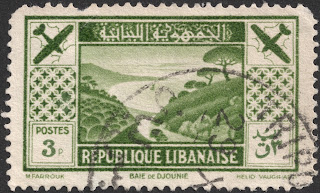 1936 Air Post Scott C52 3p yellow green "Bay of Jounie"
The 1936 issue of 8 stamps has airplanes drawn in the upper corners. This is considered the "Tourist Publicity Issue". The other design (not shown) features "Skiing in Lebanon". ! ;-) 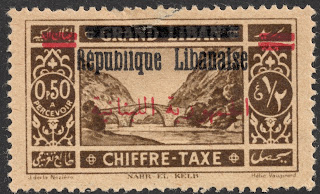 The French inspired postage dues tend to be more interesting than other countries, as they often have a pictorial image. Here is an example of a postage due stamp of 1925, overprinted for the Lebanon Republic in 1927, and then overprinted again in red with Arabic script in 1928. 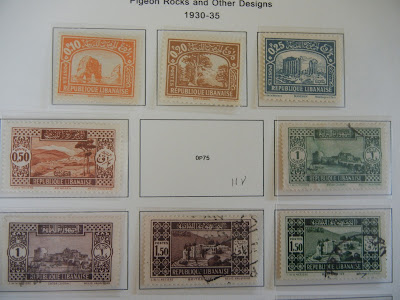 1930-35 Issue in Deep Blue
Deep Blue (Steiner) has 27 pages for classic Lebanon, and follows the Scott catalogue exactly. Sometimes collectors wonder if not having illustrations in the stamp spaces is confusing. It most definitely is not, as long as one numbers the spaces. And that is easy with the sequential following of Scott numbers by Steiner. 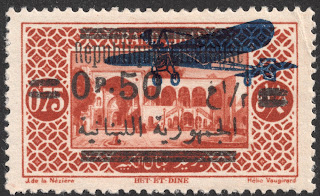 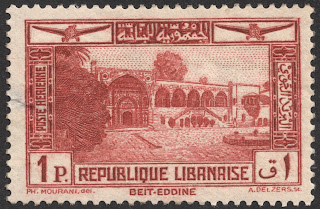 Air Post 1940 Scott C66 1p henna brown
"Arcade of Beit-ed-Din Palace"
Out of the Blue
Lebanon is a country where I really would like to have more stamps. The history, the designs, the overprints, the surcharges make for an interesting collection. And to say nothing about Lebanon being a very fascinating country indeed! ;-)