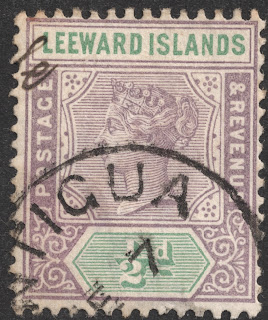 1890 Scott 1 1/2p lilac & green "Victoria"
Note the "Antigua" postmark
Quick History
The "British" Leeward Islands, consisting of Antigua, Montserrat, St. Christopher ( St. Kitts), Nevis and Anguilla, the British Virgin Islands, and Dominica (until 1940), is located in the West Indies southeast of Puerto Rico. The Capital was St. John's on Antigua, and the population was 98,000 in 1942.

Map showing the Leeward Island grouping.
The "British" Leeward Islands issued stamps from 1890-1956, and they could be used on any of the islands. But the group was divided into Presidencies: Antigua (along with Barbuda and Redonda), Montserrat, St. Christopher (St. Kitts) with Nevis and Anguilla, the British Virgin islands, and Dominica. Each Presidency issued their own stamps valid within their territory.

Composed of a group of quarrelsome sibling islands looking out for their own interest, the Leeward Islands Federation was only partially successful. They were rivals in selling their products (The sugar trade). St. Kitts and Nevis opposed sharing government funds with bankrupt Antigua and Montserrat. Unpopular though it was, "the one governor, one set of laws" for the Leeward Islands remained from 1871 until it was dissolved in 1956. 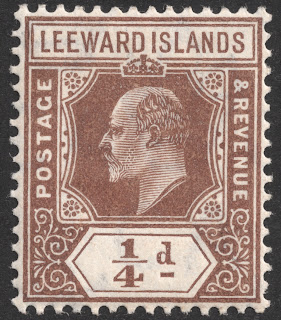 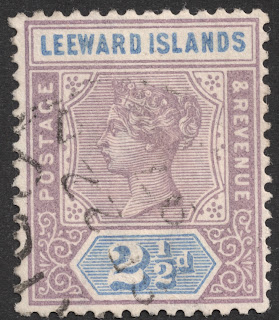 1890 Scott 3 2 1/2p lilac & ultramarine "Victoria"
The initial stamp issue for all of the "British" Leeward islands consisted of 8 stamps with the above key plate "Victoria" design. Watermark 2, the "Crown and C A" are found, and the CV for 5 stamps is <$1-$7.

Then in 1897 this regular issue was handstamped overprinted for the Queen's Jubilee. !!! Three stamps are only CV $5-$7, but I don't have any at the moment. By the way, Scott states that counterfeits exist. 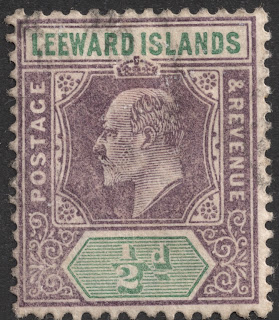 Recall that during 1890-1903, all of the islands were using the "Leeward Islands" stamps exclusively if my reading is correct. So, for this time period, the Leeward Islands stamps should be "abundant" and found (cancelled) for all the islands. Could make for an interesting side collection. ;-) 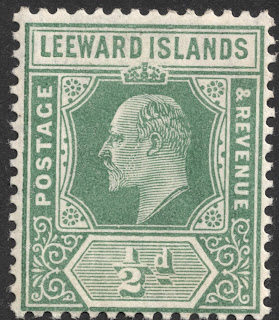 Then, between 1907-11, a 5 stamp issue in ordinary paper was forthcoming, also in wmk 3, but fortunately in different colors than the preceding issues. One then does not need to become an expert in chalky vs ordinary paper here, as I, for one, still have occasional difficulty with the determination. 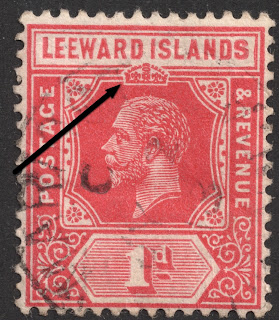 1912 Scott 48 1p carmine "George V"
Die I: Note the crown clearly drops down into the vignette tablet
In 1912-1922, a 12 stamp definitive set in either ordinary and chalky paper was issued for the "George V" reign. Watermark 3 is still present. The design is Die I, where the crown is partially dropped down into the vignette tablet (See arrow). CV is $1+-$4+ for 8 stamps. 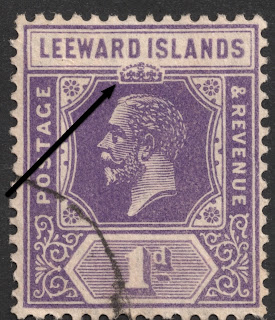 Also note this issue has Die II, another way to tell apart the 1912-22 issue with Die I.

For a fuller discussion on the Die I/Die II differences, see the Fiji post. 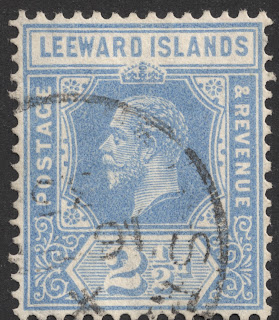 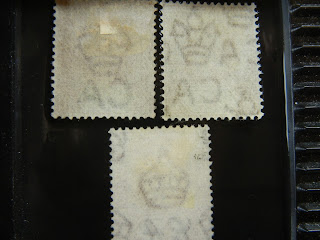 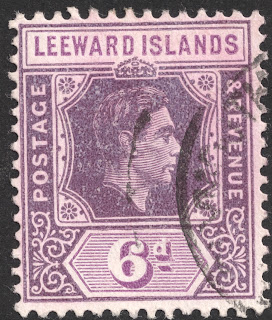 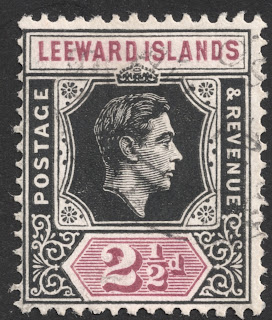 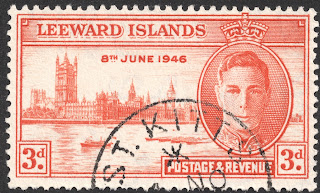 1946 Scott 117 3p deep orange  "Peace Issue"
I usually don't show omnibus issues, as they are all the same- so what's the point? ;-) But here is the common design type for the "Peace Issue" for the Leeward Islands with a great "St. Kitts" postmark. In fact, since the Leeward Islands stamps are the generic issues for all the islands, collecting by postmark would make them more interesting, in my opinion. 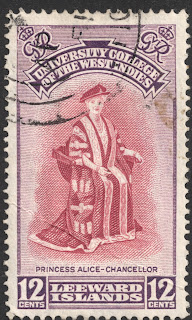 1951 Scott 131 12c lilac & rose carmine
"University Issue"
Another common design type for the West Indies, but much more intriguing, is the 1951 issue for the University College of the West Indies with a portrait of Princess Alice as chancellor. How charming. ;-) 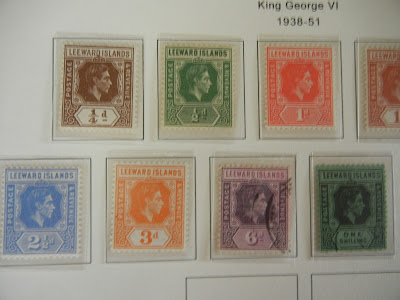 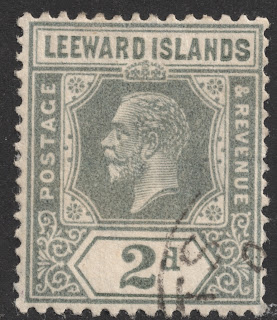 Update: Joe (see comments) notes that only 13 spaces exist for the '97 edition. It appears one whole page (31 spaces) was not put into the "97 edition- possibly inadvertent. The only other difference in content that I am aware of between the '69 and '97 editions is the absence of Anjouan in the '97.

Observations...
• although the CV is not cheap (It is, after all, a British colony), no stamps cross the $10 threshold.

• In several instances BB asks for colors that are now minor numbers. I list the specifics in the comment section, and as per protocol, I include the major numbers as choices. 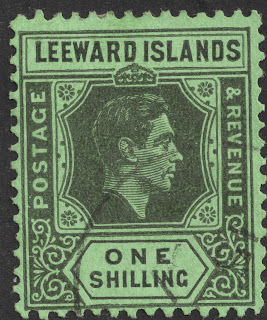 1942 Scott 111 1 sh black/emerald "George VI"
Out of the Blue
As the Leeward islands issues were the "generic" definitive stamps for all the islands, and no pictorials are included, not terribly exciting. ;-) But collecting with a readable island cancel would definitely add spice.

Note: West Indies map appears to be in the public domain