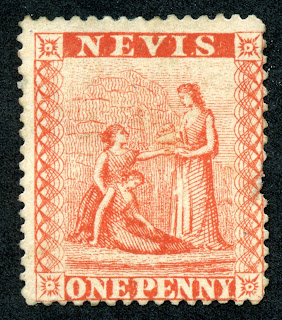 1876 Scott 14A 1p red "Medicinal Spring"
Quick History
Nevis is an island in the West Indies, southeast of Puerto Rico, and was a Presidency within the British Leewards Islands Colony. It produced its own stamps between  1861-1890. After 1890, Nevis used those of the Leeward Islands exclusively until 1903. From 1903-1956, stamps of St. Kitts-Nevis, and stamps of the Leeward Islands were used on Nevis. 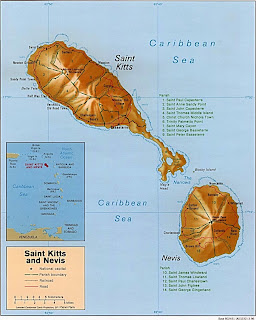 St. Kitts and Nevis
Separated by a 2 mile channel
One can tell by glancing at the map why Nevis and St. Kitts - separated by only a 2 mile "Narrows"-were philatelically associated with each other. But St. Christopher (Later, called "St. Kitts") has their own stamp production from 1870-1888, as well as Nevis, as mentioned, between 1861-1890.

For a broader perspective on the Leeward Islands group- and their stamps- see my Leewards Islands blog post.

Nevis (named originally by the Spanish as "Nuestra Senora de las Nieves" -Our Lady of the Snows), was actually settled by British settlers, who migrated from Saint Christopher, in 1628. The sugar cane grown on the island, with the help of imported African slaves, was highly profitable, even outproducing Jamaica in the 17th century. But an invasion by the French d'Iberville in 1704 decimated the sugar industry, and Nevis never really recovered.

In 1883, St. Christopher, Nevis, and Anguilla were linked under one "Presidency", with the headquarters on St. Christopher (St. Kitts). Naturally. Nevis was not pleased, as they had their own "Presidency" prior to this new administrative arrangement. 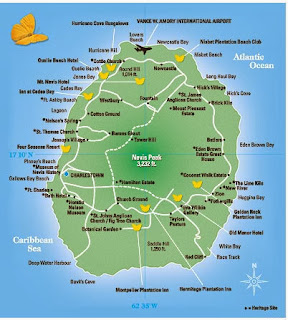 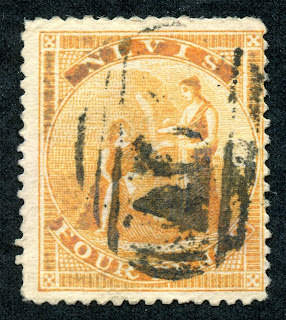 1876 Scott 15 4p orange "Medicinal Spring"
In 1778, the Bath Hotel was built to take advantage of the hot springs in the area. This, interestingly, was the first attempt at "tourism" in the Caribbean. The "Medicinal Spring" theme was also featured on the first issues of Nevis 1861-1876, some 19 stamps.

The 4p orange specimen shown above is an 1876 issue. There are four different frames used for the "Medicinal Spring" designs, although all of them have the same vignette. Five of the stamps are CV $19-$30+. 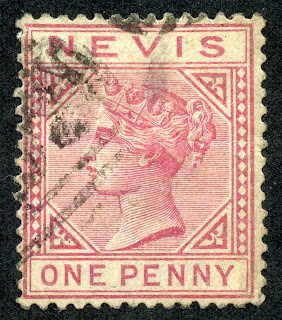 Of interest, two surcharged bisects are recognized by the Scott catalogue using the 1p violet. The CV isn't outrageous @ ~$50.

Deep Blue
Deep Blue (Steiner) has three pages for Nevis, and naturally, provides spaces for all the major Scott numbers. 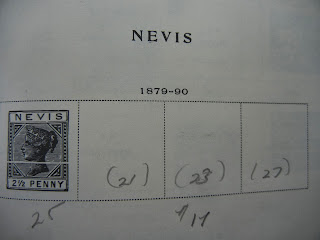 Considering the generally expensive nature of Nevis stamps, it is not surprising to find at least two stamps will cost CV $10+-$20 to fill.

Big Blue does not provide any spaces for the earlier "Medicinal Spring" stamp issues. The least expensive would be CV $10+. 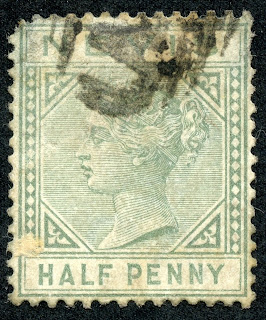 1883 Scott 21 1.2p green "Queen Victoria"
Out of the Blue
The "Medicinal Springs" design is unique for Nevis, and, although moderately expensive, may be worthwhile for the WW classical collector to have a few examples in the collection.

Note: Maps, "Alexander Hamilton" pic appear to be in the public domain. 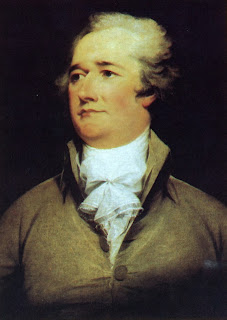