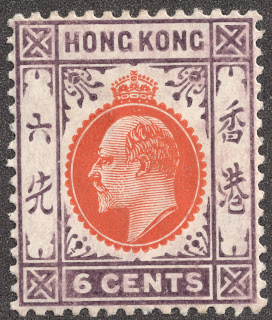 1907 Scott 92 6c red violet & orange
"King Edward VII" wmk 3
Quick History
Hong Kong was ceded to Great Britain in January, 1841 as a result of the First Opium War, and the first stamps of the colony were issued in 1862.  Hong Kong is located on the South coast of China by the Pearl River Delta. Because of the strategic location, and deep natural harbor, Hong Kong grew to be one of the leading international finance centers.

The population was ~1,000,000 in the 1930s. Languages are Cantonese and English, with Mandarin assuming more importance. 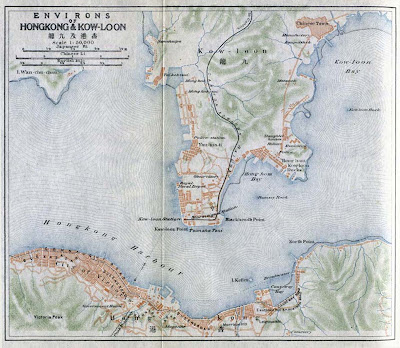 Hong Kong circa 1915
Originally the colony consisted of Hong Kong Island, but was expanded to the Kowloon Peninsula in 1860, and the the "New Territories" in 1898. There was a 100 year lease on the new lands, and hence, in 1997 China regained sovereignty. Today Hong Hong is a "Special Administrative Region" (along with the nearby Portuguese influenced Macau and the Casinos). Hong Kong retains the British common law framework, but foreign relations and military defense is China's.

For a personal view of philatelic Hong Kong (and China), see: 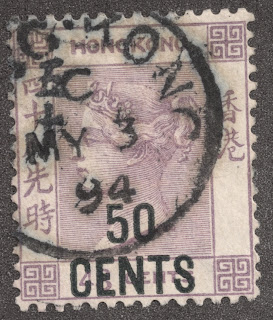 As one would expect with a "China" philatelic area , a wealthy Hong Kong population, and the many British Commonwealth collectors, Hong Kong is fairly expensive for the classical generalist.

But still, I found 21 "Queen Victoria" stamps (out of 77), that are CV <$20. And there are not a small number of the "Baldies" and "George V" stamps that can be found with a similar CV. So a nice "representative" collection can indeed be put together.

Hong Kong was under Japanese occupation from December 25, 1941- August 30, 1945. I visited the Hong Kong Historical Museum this past January, and the presentation room detailing the hardships for this era was sobering indeed. 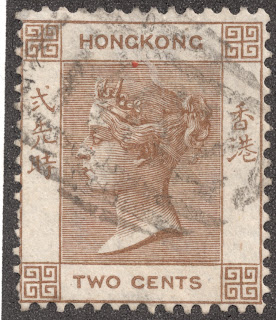 The frame design has "Hong Kong" in Chinese script along the right panel. Of interest, save for a change in monarch, the basic design continued  even through the beginning of the Queen Elizabeth II years. 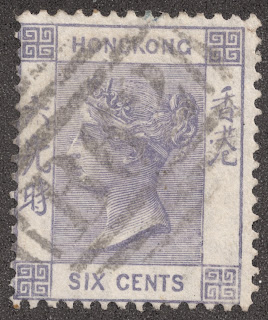 One will not get very far with Hong Kong unless watermarks are checked assiduously. Basically, the watermarks are the familiar British Colonial and Crown Agent watermarks. 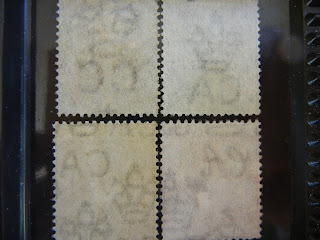 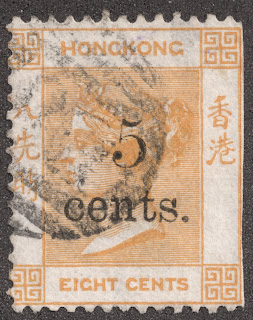 BTW, all the Hong Kong definitives through 1962 (except for a few WWII era stamps) were typographed by De La Rue and Co. Here, the surcharge was applied by Noronha and Sons, Hong Kong. 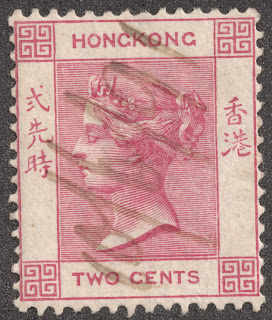 The watermark is now the Crown and C A (wmk 2).

Of interest, Hong Kong has always had 100 Cents = 1 Dollar valuation. 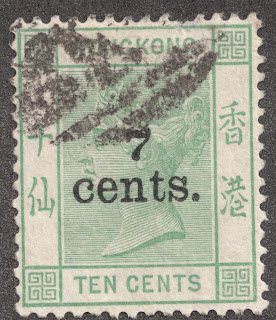 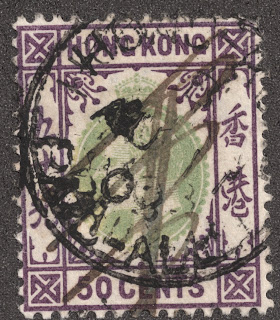 1903 Scott 80 50c red violet & gray green
"King Edward VII": wmk 2
The "Baldies" were issued beginning in 1903 with fourteen wmk 2 stamps. CV <$1-$20+ for nine stamps. Except for the lower denominations, they were bi-colored. Shown above is a rather heavily cancelled example. ;-) 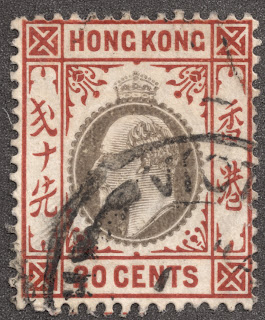 Again, the higher denominations are bi-colored.

At the same time, of course, Great Britain was issuing similar bi-colored "King Edward VII" stamps for the home country. 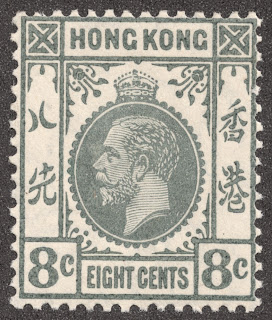 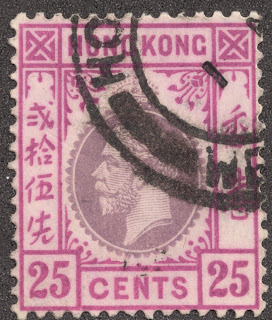 I actually didn't know I had Type I (Type II is much more common) until I read the note in Scott, and noticed my stamp! The wmk 3 agrees. A pleasant surprise. ;-) 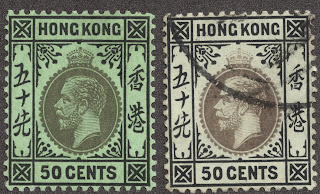 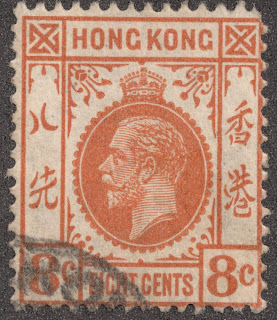 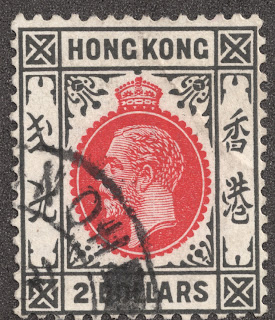 But here it appears justified, because Hong Kong actually seemed to use these higher values. Contrast with the many British (and other nations) colonies where it appears the higher denomination values were a way to milk the stamp collector. 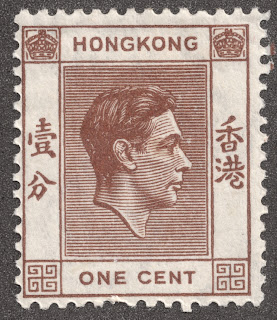 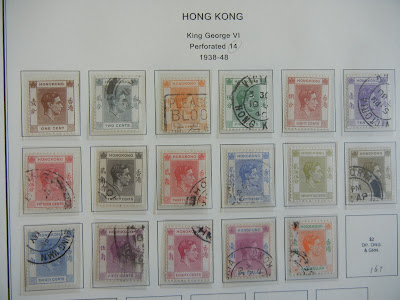 The George VI series: Initiated in 1938 and continued until 1948
1940 as a cut-off year for collecting is not always "clean". Here, 10 stamps were issued from 1941-48. Deep Blue (Steiner) does provide pages for the British Commonwealth countries up to 1952. Big Blue only has spaces for the 1938 year issue, which can be confusing. One could consider adding a page for the later stamp issues in the series. 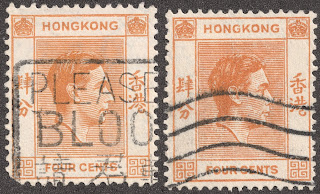 1938 Scott  156 4c orange, Perf 14, De La Rue printing
1941-46 Scott 156a 4c orange, "Coarse impression"
14 1/2 X 14 Perf,
Remember I mentioned that all the definitives up to 1962- save for a few during WWII- were De La Rue printings? Well here is the exception. The left stamp is a perf 14, De La Rue. But the right stamp was printed by Harrison & Sons (and Bradbury, Wilkinson & Co Ltd, printed some others), is perf 14 1/2 X 14, and has a more coarse impression. The coarse impressions were printed for the 2c,4c,5c,10c,30c, and 50c denominations. I found this rough print 4c orange in my collection by checking perfs and impression printings for these denominations. You might harbor some of these too. ;-) 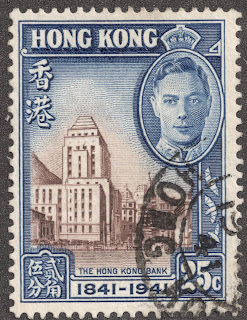 1946 Scott 175 $1 carmine & brown
Peace Issue: "Phoenix Rising from Flames"
Because of food shortages among other reasons, the population decreased from 1.6 million in 1941 to 600,000 in 1945. But after WWII, Hong Kong recovered quickly with the mass of refugees fleeing the Chinese civil war. With the ascendancy of the Communist Party, more migrants arrived, and corporations from Shanghai and Guangzhou (Canton) relocated to Hong Kong.

Postage Due 1923 Scott J2 2c green
"Scales Showing Letter Overweight"
The delightfully designed postage dues of Hong Kong were issued in 1923, and then again from 1936-47. Of the twelve postage dues of the classical era, ten are CV <$1-$10. 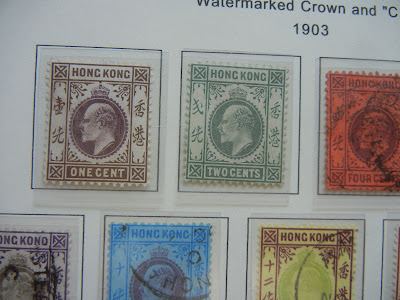 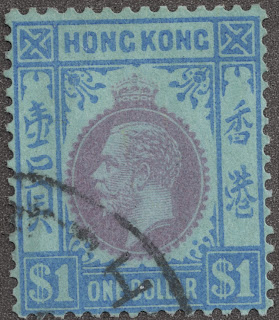 There are apparently a couple of quite expensive stamps in BB for Hong Kong, but this requires a discussion. ;-) 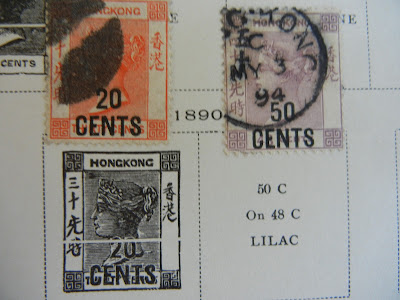 If one would like to substitute, change the date to "1885", or ignore image and put the cheaper 1891 handstamped issues into the spaces. I won't tell. ;-)

There are a total of twelve stamps on the Hong Kong pages that have a threshold of $10 CV. Only one (besides the two discussed above) reaches the $35 "Most Expensive stamps" list: the "Baldy" 1911 Scott 98 20c olive green & violet ($50). FYI, the complete list is after the checklist.

And, as one would expect, BB combines the different watermarked Queen Victoria, Edward VII, and George V stamps into one space. It still would behoove the BB collector to check watermarks, as there can be a great difference in price.

All in all, a solid presentation by Big Blue for Hong Kong. 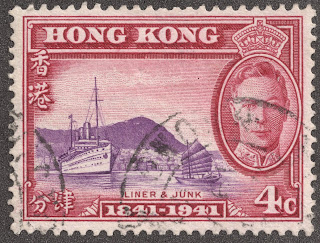 1941 Scott 169 4c rose carmine & violet
Liner "Empress of Japan" & Junk
Out of the Blue
Considering the wealth of the Hong Kong citizens, the Chinese stamp collector "influence", and, as a part of the highly collectable British Commonwealth, I was surprised prices are NOT higher for Hong Kong.

Of course they are not inexpensive, but not outrageous either.

I suspect part of the reason is the mainland Chinese stamp collectors today for the most part concentrate on the PRC era.

So collect a "representative" group of stamps before the mainland Chinese collectors branch out their interests. ;-)

Note: Map, and Peak Tram photo appear to be in the public domain. 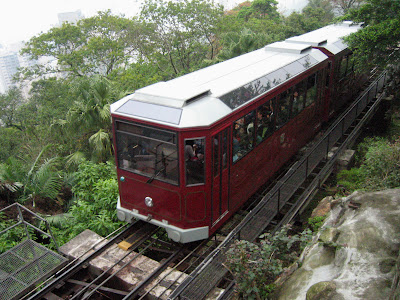