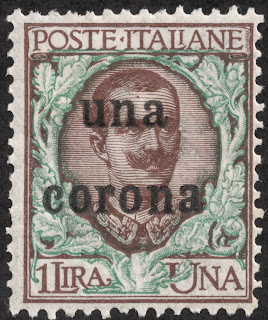 1919 Scott 1 1 corona on 1l brown & green
Issued under italian Occupation
Quick History
Now in present day Croatia, Dalmatia on the Adriatic coast was a former crownland of the Austrio-Hungarian Empire. In May 1919, Italy issued surcharged Italian stamps for the part of Dalmatia it occupied during WWI. Between 1919-1922, eight regular, two special delivery, and four postage due stamps were issued. The occupied territory was 110 square miles, with a population of 19,000 in 1921. The capital was Zara. The Territory was annexed by Italy fairly quickly, so used stamps are generally higher valued. 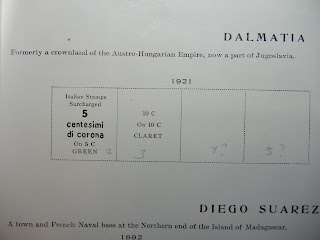 The '47 & '41 editions include Dalmatia
Big Blue Picture
The postal stamps of Dalmatia are not represented in the '69 or '97 editions, but are present in the '47 and '41 editions just after the Cyprus section.

The '47 and '41 editions, on one line, have 5 stamp spaces. As noted, the Scott Classic specialized catalogue has 14 major stamp descriptions for regular, special delivery, and postage due categories during 1919-1922. These are all surcharged Italian stamps with a sans serif typeface. The typeface will distinguish the almost identical Italian issues used in occupied Austria.

The catalogue valuation for the five stamps is $1+-$2+, so cost must not have been the reason Dalmatia was dropped. Reviewing the catalogue selection, I found four more stamps that could be added by the Big Blue collector. 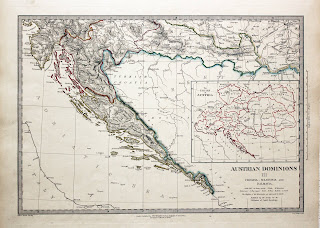 Kinds of Blue
As noted, these occupation stamps were dropped in the '97 and '69 editions, but a five stamp selection is in the '47 and '41 editions. 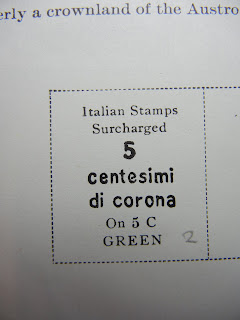 Dalmatia has surcharged Italian stamps with a sans serif typeface.
The typeface will distinguish the almost identical Italian issues used in occupied Austria
Big Blue Bottom Line
Should be easy to add these stamps back on a supplemental page.