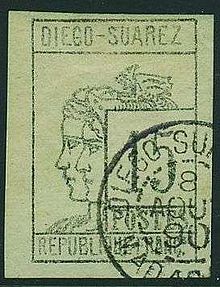 1890 15c black "Symbolical of Union of France and Madagascar"
This expensive issue is not in Big Blue
Quick History
Diego Suarez is located on the northern tip of Madagascar, and has a natural bay. France desired the harbor for a coaling station for steamboats. The territory, later known as Antsiranana, was ceded to France after the invasion in 1883 of Madagascar (First Franco-Hova War). The French also acquired the island of Nossi-Be as a protectorate.
From 1885-1996, Diego Suarez (named after Diogo Soares, a Portuguese explorer) was a French protectorate and colony. The administration of the colony was given to Madagascar in 1896. Stamps were issued from 1890-1894. 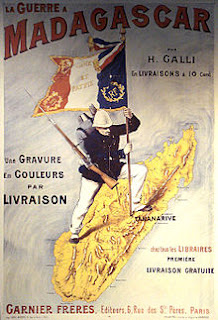 La Guerre Madagascar
Big Blue Picture
Big Blue '97, on two lines of one page, has eight stamps spaces for the French "Navigation & Commerce" issues of 1892 & 1894. The 2011 Scott Classic Specialized catalogue has 63 major stamp descriptions for regular and postage due issues beginning in 1890. Coverage by Big Blue is 13%.

Big Blue begins with the 1892 issue, but there are 24 stamps issued prior to that date.  Some issues (The 1890 Symbolical of Union of France and Madagascar issue-see blog image) appear interesting, but expensive ($90+-$200+). Others are overprinted or surcharged, but the least expensive is $10+. The 1891-92 thirteen postage due stamps are no less than $30+. The 1892 and 1894 issues , which are represented in Big Blue, do have six additional stamps in the $5+ category, but none less. Long story short: I see no additional affordable stamps(<$5). ;-) 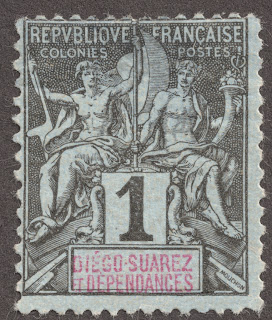 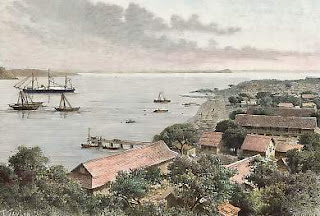 Note: Map, images and stamp image appear to be in the public domain. 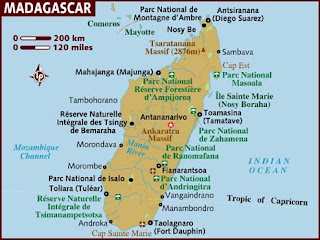