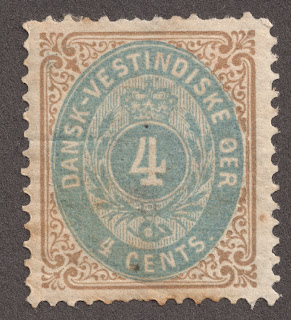 1874-78 Scott 7 4c brown & dull blue "Numerals"
Normal frame: pay attention to the arabesques in the left upper corner
Quick History
The U.S. bought these Islands for 25 million dollars from Denmark in 1917, becoming the U.S. Virgin Islands. But prior, these islands (St. Thomas, St. John, Santa Cruz) in the West Indies east of Puerto Rico were a Danish Colony. The population was 27,000 in 1911, and the Capital was Charlotte Amalie.

There were British post offices in the DWI from 1849-1879 with cancelled stamps from Great Britain known: all really too expensive for BB collector consideration. The Danish issues proper began in 1856. Since letter writers from the DWI never numbered more than in the hundreds, genuine used copies are generally more expensive than mint copies. 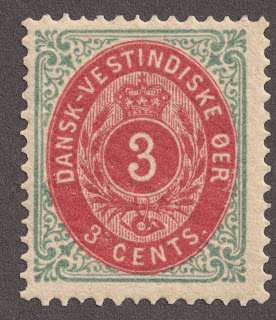 Nice selection by Big Blue, and I found NO additional stamps ( cutoff $5) to suggest for the Big Blue collector. That of course means the price of DWI stamps are dear. There are 25 stamps between $1+-$10. There are 12 stamps over $10+; 5 of them at or over $25. None however climb into the "most expensive" list.

Comments...
A) The 1873-79 Numeral issue is quite complex. There are many minor numbers for normal frame/inverted frame,color variations, and paper thickness. It would behoove the BB collector to be able to identify and separate the normal frame and inverted frame varieties. I include image examples in this blog of both varieties.

Also, there is an "orphan" issue of  "1873 types", 1896-01 Scott 16-20, for which Big Blue does not provide space. Several of the stamps (1c,3c,4c,) are less expensive than Big Blue's designated choices for the 1873-79 issue. There are perforation, color, and normal/inverted frame differences between the issues as outlined in the checklist, as well as Scott.

D) The stamps themselves are wonderfully engraved and/or typographed, while the postage dues are lithographed. The classic art of stamp making and design was very much alive in Denmark. 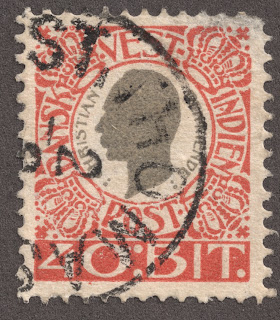 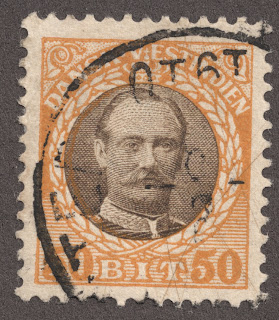 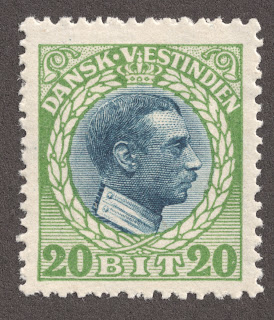 1915 Scott 54 20b green & blue
Christian X
Big Blue Bottom Line
Big Blue has a very nice selection indeed of the DWI issues.  Be aware of the learning curve for the 1873-79 Numerals.

Note: Stamp prices are binned into broad categories. For specific valuations, consult a Scott catalogue.
Posted by Jim at 4:25 PM