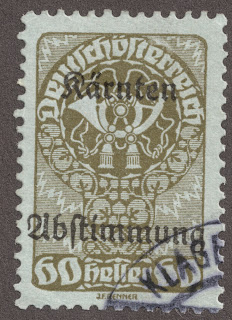 1920 Austrian Carinthia Plebiscite Semi-Postal
60h olive green on azure
Quick History
After WWI, the Carinthian territory ( Composed of both German speaking and Slovene speaking peoples) was desired by both Austria , and the newly created Kingdom of Serbs,Croats, and Slovenes (Yugoslavia). A Plebiscite (Referendum) was held on October 10, 1920. The propaganda by both sides was intense prior to the vote. Austria emphasized the economic benefits of keeping the Klagenfurt basin a unity, and the brotherhood between the Slovene and German speaking peoples. The Yugoslavian propaganda emphasized  Slovene national awareness. Naturally, both sides used stamps as fund raising and propaganda tools. Austrian stamps of 1919-20, overprinted in black "Karnten Abstimmung", referring to the Plebiscite, were issued. These 19 semi-postals (B11-B29), sold at three times face value, and were for the benefit of the Plebiscite Propaganda Fund. Likewise, Six 1919 Solvenian newspaper stamps (4LB1-4LB6) were overprinted/surcharged in red , and had the initials "K.G.C.A.", which signify "Carinthian Government Commission Zone A". The outcome was a 60% vote for adhesion to Austria, and a 40% vote for the Kingdom of Serbs, Croats, and Slovenes. 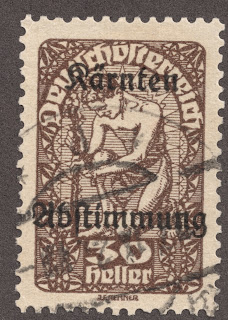 1920 Austrian Carinthia Plebiscite Semi-Postal
Scott B16 30h brown on buff overprinted "Karnten Abstimmung"
Big Blue Picture
The '47 and '41 editions, under "Carinthia", have a half page of Carinthian Plebiscite stamps from both Austria and Yugoslavia. This entry disappeared with the '69 and '97 editions. So the stamps are all gone from Big Blue also, right?

Unfortunately, the same was not done for the Yugoslav (Slovenia Issues) stamps. These four stamps are gone. 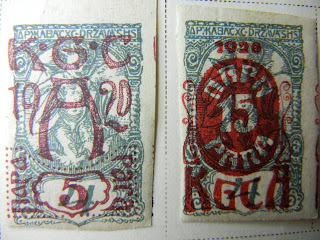 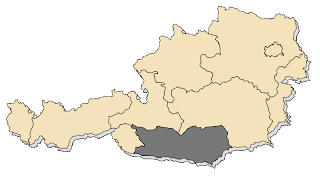 Location of Carinthia on Austrian Map
Kinds of Blue
As noted in the Checklist, the '47 and '41 editions ,under the "Carinthia" entry have the Austrian and Slovenian semi-postals for the Carinthian Plebiscite.

My '69 editions and my '97 edition do not have a separate entry for "Carinthia". But as outlined above, one of my '69's and the '97 DO have the Austrian Carinthian Plebiscite stamps PLUS four more stamps to complete the set in the Austrian semi-postal section. But neither the '69 not the '97 have the Slovenian semi-postals in the Yugoslavia section.

I said "one" of my '69s because my other '69 edition has no Austrian semi-postal section! Very curious indeed. The '69 that has the semi-postals, including of course the Austrian Carinthian Plebiscite stamp spaces, has the same layout as the '97 edition. These layouts are different than the '47 and '41 semi-postal Austrian sections, so the '69 semi-postal section is NOT borrowed or inserted from an earlier edition.

So why doesn't the other '69 edition have an Austrian semi-postal section? Frankly, I don't know. Several possibilities....
a) The semi-postal section was removed for some reason before I acquired the album. Possible, as not everyone is interested in semi-postals.
b) There are several "sub-editions" or iterations of the '69 edition. I'm beginning to wonder if this might be the case, because I've had other reports of '69 editions with additions/deletions that did not square with my edition(s). 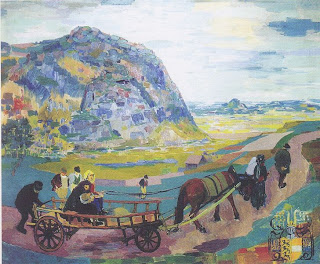 Note: Map and painting image appear to be in the public domain. 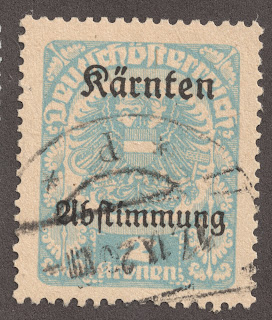