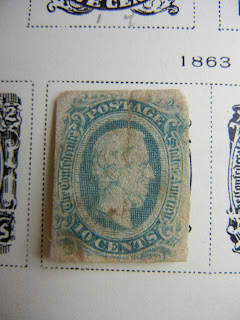 Note on the Civil War and the Postal system:  With the War sometimes dividing family and friends, a working postal system for communication was highly important. Letter writing increased significantly across the entire divided nation, especially between the soldiers and their families. The Confederacy had a very able postal system throughout the conflict. Mail was sent across lines under a "Flag of Truce". Mail from the North to the South went through City Point,Virginia where it was inspected before being sent further. Mail from the South to the North was opened and inspected at Fortress Monroe along the Virginia coast before entering the U.S. mail stream.

Big Blue Picture
Big Blue '97, on two lines of one page, has six stamp spaces for 1861-62 and 1863. The 2011 Scott Classic Specialized catalogue, for the General Issues, has fourteen major stamp descriptions. Coverage by Big Blue is 43% .

Many U.S. collectors specialize in the Civil war postage era.  Big Blue naturally only provides space for some of the general issues. But even then, filling the first 1861-62 illustrated stamp space for "Jefferson Davis" requires either the expensive Scott 4 ($120+), or the even more Scott 1 ($170+).

The Southern Postmaster Provisionals, issued between June 1, 1861 and October 16, 1861, are covered in nine pages of the Classic catalogue. Alas, the least expensive is the Memphis,Tennessee 2c blue ($100+), with most of the other Provisionals costing thousands. 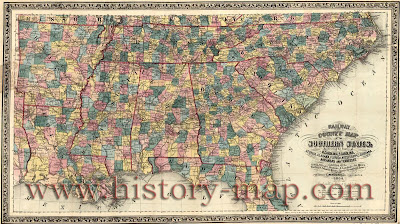 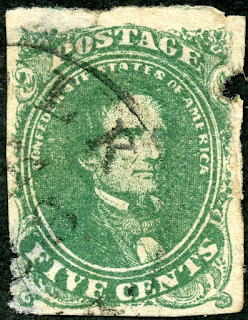 CV is $175, with CV $250 for the dark green shade. Unfortunately, this particular stamp has a significant flaw (hole). 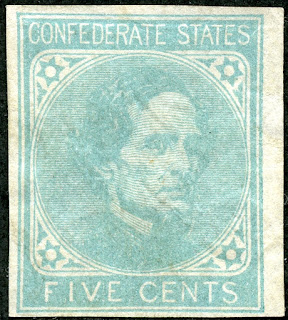 (1862 Scott 6 or 7 5c blue "Jefferson Davis", Typographed)
Actually, a New York Counterfeit!
When I obtained this stamp, it didn't seem "right" to me. Was it a Scott 6 (London printing) or a Scott 7 (Richmond printing)? Trish Kaufmann's excellent Confederate Stamp Primer Online quickly resolved the question. It was neither Scott 6 or 7, but rather the ubiquitous New York Counterfeit, thanks to Walter Scott (Yes, THAT Scott!)!

Characteristics of the counterfeit include an "odd cloudy greenish-blue aqua color", and a shortened crossbar on the "F" and "E" of "FIVE", compared to the genuine. 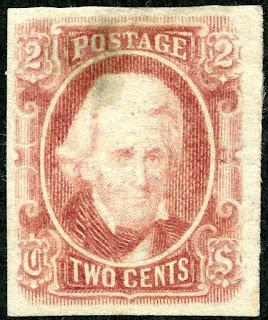 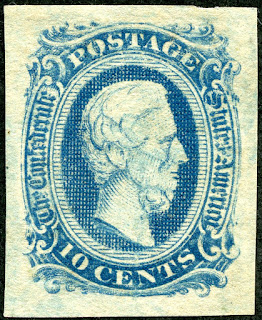 1863-64 Scott 11 10c blue "Jefferson Davis"
Engraved, Type I
Scott's note of how to tell the difference between Scott 11 & Scott 12 is often hard to see: namely that Scott 12 has an additional line outside the ornaments at the four corners.

It was not until the Confederate Stamp primer Online provided an easy way to differenciate that I was able to separate out the two stamps. The back of the hair line goes well past the ear. 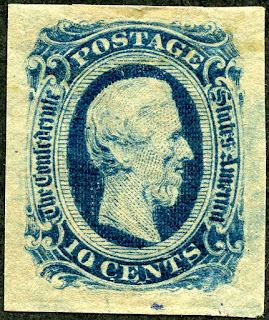 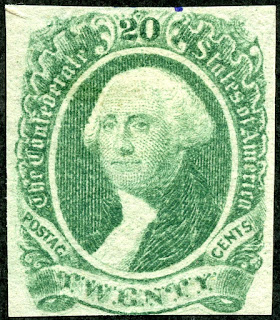 Big Blue Bottom Line
The bottom line for these issues- and their tangible significance- is that they represent much more than the stamps themselves.

Note: Map with the subscript appears to be in the Public domain. A Print without subscript is available at www.history-map.com.

Note: You will need to consult a Scott catalogue for specific pricing. I only give a very "ball park" price, and never the actual catalogue value.