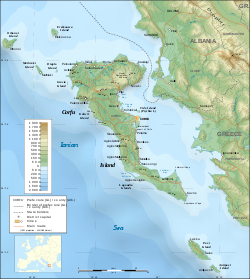 Map of Corfu Island in the Ionian Sea
Quick History
Corfu, or Kerkyra (Greek), is the second largest Greek Island on the Ionian Sea. The main settlement is also called Corfu, and the population was 122,000 in 1920. Corfu became part of Greece in 1864, but in 1923 the island was occupied by Italy; and hence these overprinted Italian Stamps entered the catalogue.

Greek mythology and Homer: Poseidon, god of the sea, fell in love with a nymph, Korkyra, and transported her to this heretofore unnamed island. The island name Korkyra evolved through Doric influences to the present day Kerkyra.  Homer named seven plants that grew in the gardens of this island: wild olive, oil olive, pear, pomegranate, apple, fig and grape vine.

Big Blue Picture
Big Blue '97, on two lines of one page, has six stamp spaces for the year "1923". The 2011 Scott Classic Specialized catalogue has 14 major stamp descriptions while Corfu was under occupation by the Italians. These are the only stamps ever issued specifically for Corfu. Coverage for this small issue in Big Blue is 43%.

All of Big Blue's stamps come from the eight stamp issue with "CORFU" overprint. The other 1923 issue (six stamps) which was also surcharged, is not represented. However, the minimum catalogue price is $10+ and up; so perhaps a bit too expensive for inclusion in Big Blue. 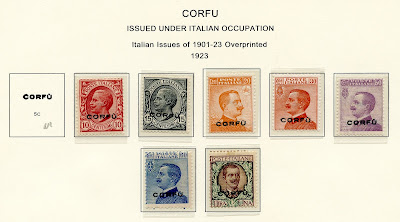 Kinds of Blue
The '97,'69,'47, and '41 editions are identical in content. Note the Corfu section can be found at the bottom of the last page of Crete in the '69 and earlier editions. Surprisingly, if one checks the '69 table of contents list, Corfu is nowhere to be found. Corfu is listed in the table of contents in the '41 and '47 editions.

Big Blue Bottom Line
If it hadn't been for this occupation stamp issue, I and probably you, would not have known that Italy occupied Corfu in 1923.  :-)  Unfortunately, this was not the last occupation. More horrifically, Italy under Mussolini , and then the Nazis, controlled Corfu between 1941-44.

Note: Map in Public domain with this stipulation. "Any use of this map can be made as long as you credit me (Eric Gaba-Wikimedia Commons user:Sting) as the author"