During the period between the initiation of the first League of Nations postmarks on 8 November 1920 and the introduction of Swiss stamps with League overprints on 3 October 1922, the League Secretariat used regular Swiss stamps. This cover coincidentally bears both “Geneva 1” and “Geneva 10” cancellations, both of which were used by the League for many years. 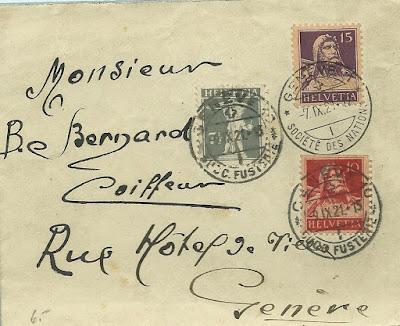 The registered cover from the League, 2 June 1921, is probably philatelically inspired. It bears two fairly uncommon se-tenant pairs from booklets issued in 1921, possibly posted on their first day of issue. (300,000 pairs of the 2½c and 120,000 of the 20c). The League used registration etiquettes imprinted with Societe des Nations before it had stamps with their name overprinted. “No 115” must have been a fairly early registration etiquette. 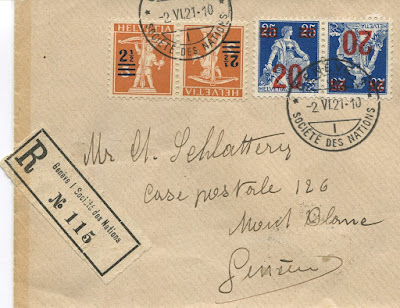 Two postcards follow. The first was issued to celebrate the League’s first General Assembly. Notice at the top of the card that the United States is not listed as a member. The second shows a pre-WWI waterfront view of the Genève Hôtel National, built in 1873-5 and retrofitted as the League’s home in 1919-20. The building is now known as Palais Wilson in honor of Woodrow Wilson, the League’s founder. 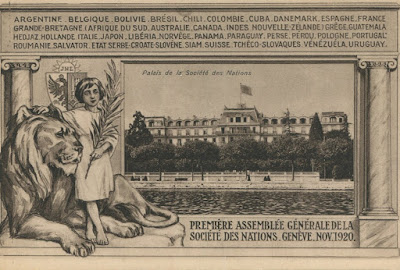 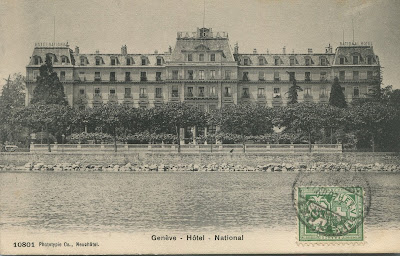 Genève Hôtel National
Posted by Jim at 7:00 AM