Stylistic precursors of The League of Nations’ official stamps, these sixteen definitive stamps were originally issued in 1907-09, then overprinted toward the end of World War I for the correspondence of the Swiss government’s agency for industrial economic affairs (IKW). In use from 23 July 1918 to 15 May 1919, there are two printings: the first with a thinner overprint font and serifs, the second with a thicker font and sans-serif. The second printing was delivered on 3 September 1918.

*Listed below each stamp: type of overprint, number issued, and Scott catalog number.

The first printing stamps (thin font, serifs) are more difficult to collect than the second (thick font, sans-serif). They are fewer in number and bogus overprints abound, particularly on unused examples. The second printing mostly escaped falsification. The forger of the middle example below appears to have been entirely undecided about whether he liked serifs or not. What’s more, he either added a bogus cancel or used a previously cancelled stamp for the fakery -- it’s not very convincing.

Scott #1o6, forgery, Scott #1o14
Many countries, including England and the United States, established similar boards or agencies aimed at controlling trade during World War I. The US agency (the War Trade Board) was responsible for licensing exports and imports, rationing supplies to neutrals, and conserving commodities and shipping facilities for American and Allied use. It also sought to keep strategic goods out of enemy hands and prohibit the use of enemy credit and financial holdings in the United States.


Only Switzerland issued stamps restricted to its agency’s use. The following cover carried an official message from “Embroidery Export Central” to Mr. Geo Welti six days before use of IKW overprints was discontinued. Embroidery work was apparently sufficiently important to the Swiss that the IKW had an office dedicated to its prosperity. 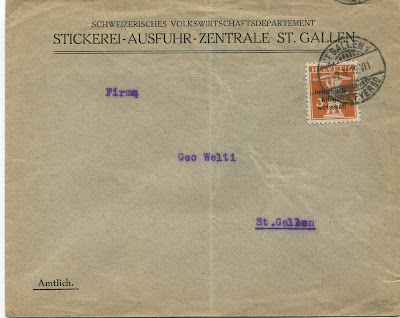 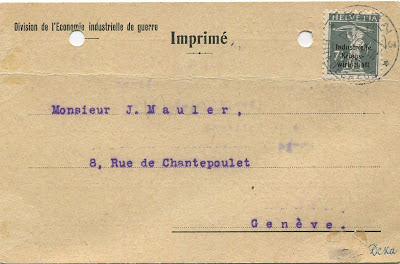 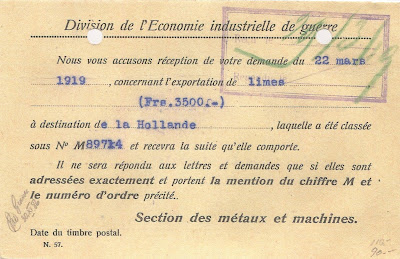 Concerning the export of limes (for guacamole, no doubt, or scurvy prophylaxis).
Scott #1o12, cancelled in Bern, 23 March 1919. Reverse side photocopied

Following the demobilization of the IKW, mint remainders were sold on 28 June 1919 to collectors -- the number of leftover stamps is estimated at 47,000+. Genuine IKW used examples are, therefore, usually more valuable than mint examples. Scott #1o12 was never issued. Double and inverted overprints are forgeries. A further caution: private reprints of the first issue are almost indistinguishable from the originals.

Note: League of Nations: Introduction and Table of Contents Links is found along the left column of Blog before "Country Posts" or here.