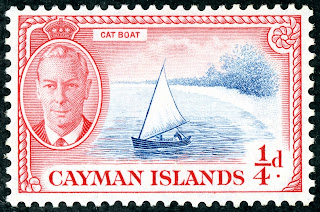 1950 Scott 122 1/4p rose red & blue "Catboat"
Into the Deep Blue
British Commonwealth issues, for those of us that like pictorials, have a reputation as a bit staid and stuffy with issue after issue showing the Queen or King and not much else.

So it is a delight when that rule is broken.

The bi-colored Cayman Islands issue of 1950 is lovely, and we will spend some time with this post taking a look! 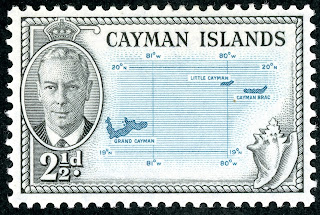 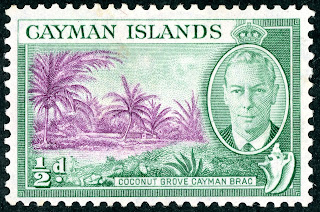 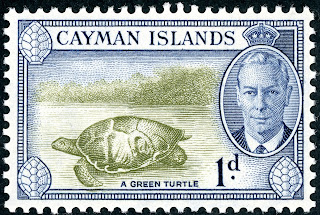 1950 Scott 124 1p deep blue & olive
"Green Turtle"
Christopher Columbus called the Cayman Islands "Las Tortugas" in 1503 because of the abundance of the green sea turtles. Today they are less prevalent.  But the largest tourist attraction (500,000 visitors annually) is the Cayman Turtle Centre, where breeding and conservation measures are in force. 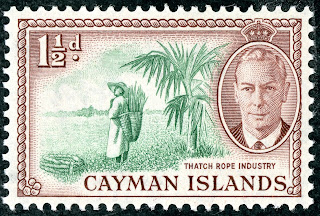 1950 Scott 125 1 1/2p chocolate & blue green
"Thatch Rope Industry"
The fibers from the silver thatch palm were used to make rope, a local traditional industry. Today, one can buy bags and hats made from the material at the craft markets. 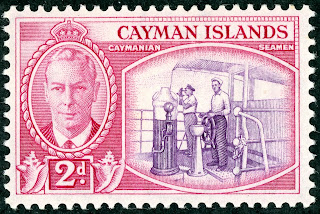 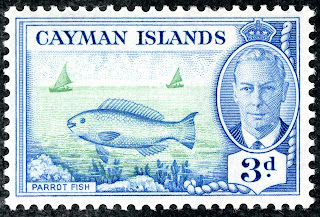 1950 Scott 128 3p blue & blue green
"Parrot Fish"
Around the coral reefs are found the colorful Parrot Fish. One is likely to encounter them while snorkeling. As they feed of the coral, they make a "crunching" noise, and can produce a pond of sand yearly. 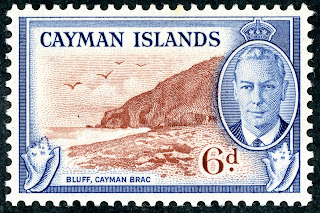 1950 Scott 129 6p deep blue & orange brown
"Bluff, Cayman Brac"
Cayman Brac is known for the 140 foot cliff made out of limestone. In fact, the island was named after this feature. "Brac" in Gaelic means "Bluff". 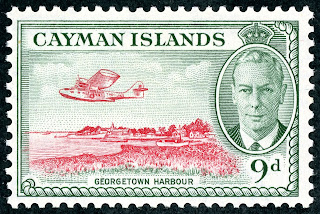 Georgetown presently has a population of 28,000, making it the second largest city of the British Overseas Territories. 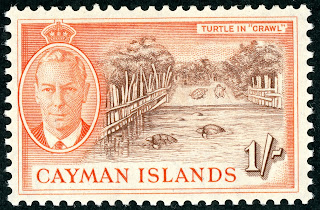 1950 Scott 131 1sh red orange & brown
Turtle "Crawl"
Turtles are the national dish of the Cayman Islands, but surveys show only 30% of the population eat turtles, and it is not popular with tourists. 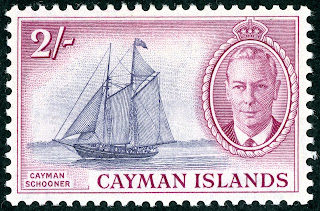 1950 Scott 132 2sh red violet & violet
"Cayman Schooner"
Over 300 schooners were built in the Caymans. The mahogany found on the islands was used for the ship frames. 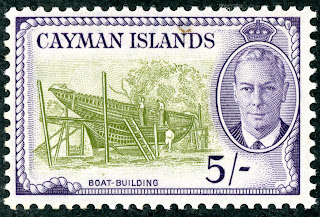 1950 Scott 133 5sh violet & olive
"Boat Building"
As I mentioned in the Cayman Islands 1900-1947 post, Shipbuilding was a thriving industry in the Caymans. Now it  is tourism, snorkeling, off-shore banking and a tax haven. 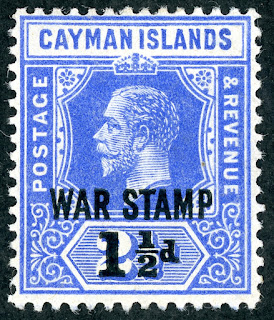 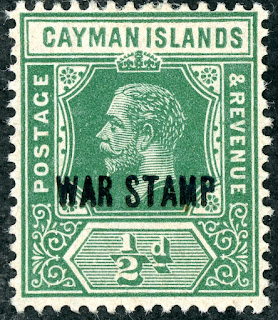 1919 Scott MR5 1/2p green
1912 Scott 33 Overprinted
The February 4, 1919 MR4 has been reported to have a "Brownish paper" variety. This merely turns out to be caused by the interleaving used for shipment. 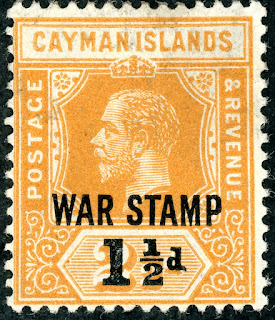 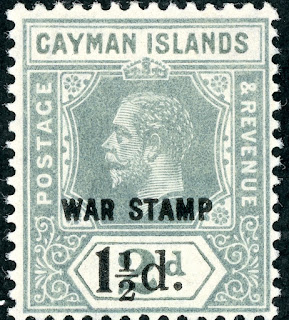 1920 Scott MR7 1 1/2p on 2p gray
1912 Scott 35 Surcharged
This too (MR7) had a "rose-tinted paper" variety reported: again caused by the interleaving used during shipment. These "tinted paper" varieties were given higher CVs in some catalogues (Minkus) in the past. 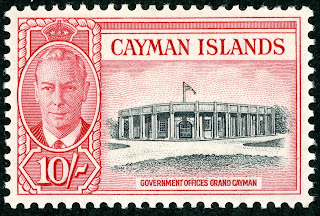