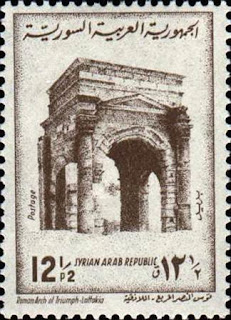 If Big Blue’s Latakia stamps seem familiar, there’s good reason. They’re Syrian stamps overprinted in French and Arabic, like the stamps of the Alaouites which preceded them, for postal service in the ancient city of Latakia (Laodicea ad Mare, الْلَاذِقِيَّة‎ al-Lādhiqīyah), now part of Syria.

The French overprint continues the saga of post-World War I reconstruction, a recurring theme in Big Blue and in my comments about its stamps.

The Ottoman Empire, of which Latakia was a miniscule part, had a long and glorious history. Reaching a peak around 1500 CE, it stretched from what is now Bulgaria, through Greece and Israel and Syria, and extended into much of Saudi Arabia and along the north coast of Africa. But, at least for 200 years before WWI, it had been declining both in influence and territory. The Ottomans were accommodating to modernity poorly. Then they sided with the Central European powers during WWI and, tragically, exterminated 1.5 million of their own citizens, the Armenians. When the war ended, the victors deemed the Ottoman Empire ripe for dissolution, which occurred formally in 1922.

The League of Nations assigned (mandated) France to establish order in the Syrian part of the Empire, including Latakia, an area populated mostly by Alawites (Alaouites).

The Alawites and the French got along badly with each other, the former being highly factional and implacably separatist. As a concession in 1930, the French renamed the area Latakia. The Alaouites stamps, as a result, stopped and the Latakia stamps started, although they were in use only until 1936 when Latakia became part of Syria. The annexation displeased the Alawites but, weak and disorganized, they mounted little resistance.

So, for some collectors the stamps of Latakia become monuments to a lost cause while, for others, only scraps in the dustbin of WWI’s aftermath (aka Big Blue).

The French mandate era in the Middle East following WW II  resulted in some interesting overprinted issues. And obscure and short lived states- such as Latakia. Fascinating. 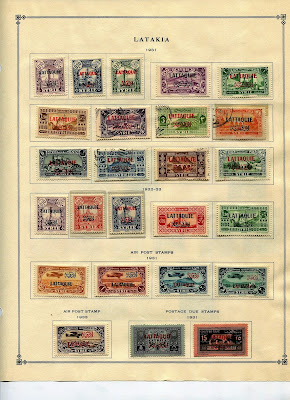 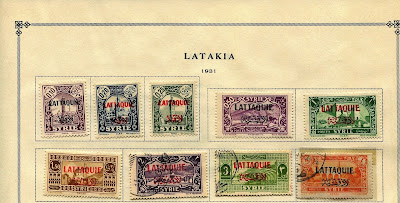