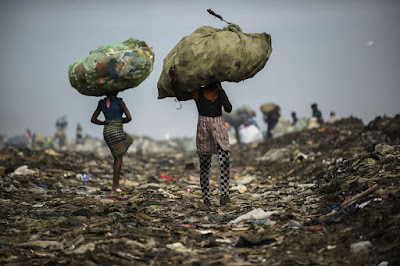 Inhambane, known today principally by stamp collectors, is one of several Mozambique districts that for a few years in the early 1900s had their own stamps.

So, I’ll comment, not on the stamps, but on a haunting memory of my 2007 visit to Mozambique -- the rubbish pickers. There are thousands of them, and they sort through the trash of every dump in the country (in many other countries, too). The above pic, although not one I took, is close to what’s etched in my brain.

Rubbish pickers and stamp collectors have much in common. Both are adept at sorting odd bits that ordinary folk think worthless, and they’re persistent. Both have a discerning eye for what might be valuable. Both, as informal solid waste workers, engage in basic recycling. Both save space in landfills. Both are easily delighted -- a piece of plastic jewelry or a stamp that fits a blank album space. Mobile apps such as “I Got Trash” connect pickers with those who have what they want, much as ebay does for stamp collectors.

Rubbish picking is filthy and dangerous; my wife says stamp collecting is filthy and, if I scatter too many used stamp hinges, dangerous (to me). There is, undeniably, a public nuisance factor in both enterprises. Theft, too, is sometimes associated with both. And it’s hard to make a living by sorting rubbish or stamps.

On the whole, though, rubbish picking makes the more valuable contribution to society: collecting garbage from places that lack public services, reducing dependence on scarce raw materials by recycling, creating jobs for otherwise unemployable people, expanding the lifespan of dumps and, ultimately, reducing pollution and global warming. We stamp collectors need to increase our social worth.

Error alert: top row of the supplement page shows a stray Horta stamp. It has been replaced.

Census: 37 in BB spaces, four tip-ins, 23 on the supplement page, not counting the Horta. Since the scans were made, I’ve collected another seven, although I don’t know why.

Jim's Observations
If Bud's essay on the commonality between rubbish pickers and stamp collectors doesn't put a smile on your face, I don't know what would. ;-)

I find the repetitive designs used for every Portuguese colony a bit boring. But a bit of historical understanding is needed. Portugal was not a rich nation. So the colonies, which were many, got there stamps "on the cheap".
What I do find interesting are the exotic and remote places of many of the Portuguese colonies.

It is curious, though, that Scott generally gives no increase in value for a used vs unused stamp. For me, a nicely postmarked Portuguese colony stamp means much more than simply an unused specimen. 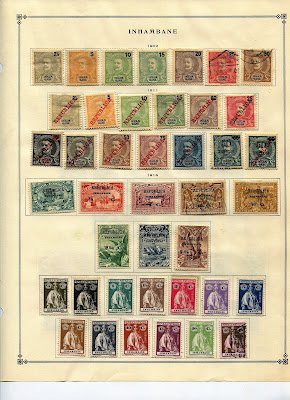 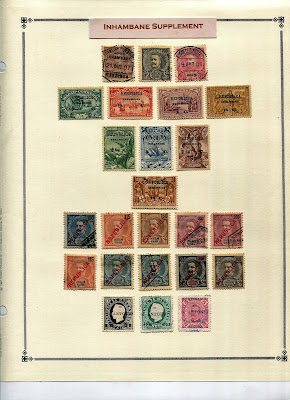