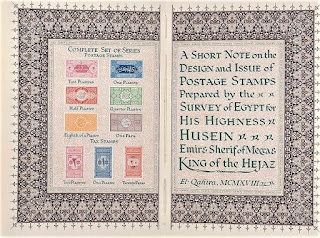 A recipe for Hejaz stamps:
·         mix equal measures of romance, mystery and intrigue;
·         add a gutsy British hero astride a camel in the Arabian desert who, among other daring-dos, designs stamps;
·         season with liberal dashes of World War I skullduggery and chicanery;
·         serve with arabesque flourishes to the Grand Sherif of Mecca, aspiring King of all Arabs, in a full-color hand-sewn pamphlet.

The Grand Sherif was Sayyid Hussein bin Ali and the hero was the legendary Lawrence of Arabia. Lawrence meant these first stamps to promote the new nation of Hejaz that resulted from Hussein’s “Great Arab Revolt” (1916) and to celebrate its escape from Ottoman and German clutches.

Alas, the fortunes of kings and heroes abate. Hussein’s Nejdi neighbors (the house of Saud) took offence at his proclaiming himself to be King of all Arabs, so they drove him out in 1925. Hejaz stamps, both the ones Lawrence designed and those with elaborate Arabic tracery and colored overprints that followed (see supplement pages), became worthless, except to us collectors.

Curiously, the Royal Mail has commemorated a movie about Lawrence, but not Lawrence himself. Saudi Arabia, no surprise, has done neither.

1A Short Note on the Design and Issue of Postage Stamps. Prepared by the Survey of Egypt for His Highness Husein. Emir & Sherif of Mecca & King of the Hejaz. With a brief introduction, unsigned, but by Sir Henry MacMahon, and an account of the technical and political history of the issue. Offered by Maggs Bros., Limited, Rare Books and Manuscripts (GB).

Jim's Observations
Of interest, the 1947 Scott catalogue maintained separate Hejaz and Nejd sections, because of the dual character of the Kingdoms. The '41/'47 Big Blues also have dual entries for Hejaz and Nejd. By 1969, Big Blue had shrunk the Hejaz section from one page to two lines, and renamed the Nejd section "Saudi Arabia".The 2011 Scott Classic Specialized catalogue has all the iterations of the Kingdoms under "Saudi Arabia", and so the blog post (link below) covers all the stamp issues beginning in 1916. 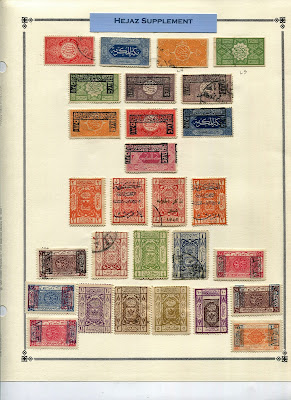 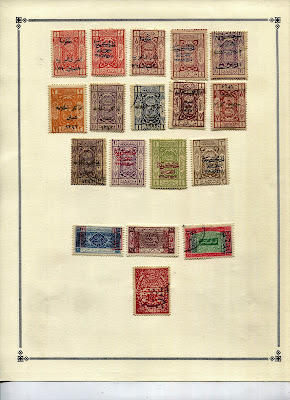 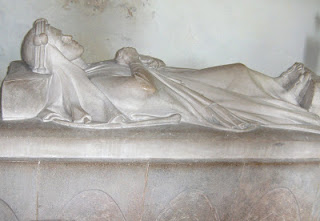 Lawrence of Arabia Sarcophagus
Saint Martin's Church, Dorset
Posted by Jim at 7:00 AM