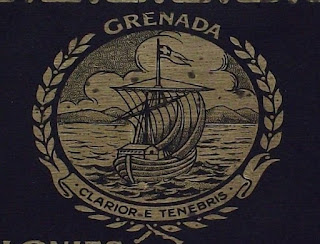 Jim’s postings for this blog are careful, descriptive, and insightful; moreover, they’re unruffled and level headed. Many collectors say so. My comments, on the other hand, are impulsive, sometimes fitful to the point of being crotchety. This can be expected, of course, because I’m older than Jim and have earned my brass curmudgeon medal.

And so, as I write this, my yo-yo jerks to the downside.

My funk doesn’t so much spring from Grenada’s classical era stamps. As more or less standard British colonial issues, they’re adequate, unobjectionable, boring; although they do have some interesting overprints (see supplement page). Jim describes Grenada’s stamps admirably in the main part of this blog and the late Gerben van Gelder served our hobby well by detailing the postal history of this small island. (Jim's Note: Sad to say, Gerben's web site is, at present, not active.)

Several stamps bear the Grenada coat of arms, which is a curious bit of heraldry. A sail boat approaching an island is a common enough colonial image, but what can the motto Clarior e tenebris mean? What is it about Grenada that is “light from obscurity” or “brighter through darkness.” Perhaps the chocolate industry? (The above example was scavenged from a WWI era chocolate tin.)

If not the classical era stamps, what then provokes my funk? Well, I would like to have seen BB’s Part One Grenada section chock-full of Plutos, and Mickey and Minnie mice, and Marilyn Monroes, and space ships. Why should collectors of post-1970s Grenada stamps have all the fun? (Grumble. Fume.)


Image is licensed under Creative Commons BY NC SA. Permission for use is granted.

Jim's Observations
Grenada became a British colony during the Seven Years' War  in 1763.
Nutmeg was introduced in 1843; and today Grenada is known as  the "Island of Spice", as it supplies 40% of the world's nutmeg.
In 1861, Grenada issued the 1p green and the 6p rose with the iconic "Chalon Head" portrait of Queen Elizabeth. Other countries that have issued the "Chalon Head" include Canada, Nova Scotia, Tasmania, New Zealand, The Bahamas, Natal, New Brunswick, Queensland, and Prince Edward Island.
Grenada remained a Crown Colony from 1877-1950, when moves towards autonomy by Grenadians - both peaceful and violent- occurred. Independence was granted in 1974.
In 1983 the U.S. lead an invasion to overthrow the  "People's Revolutionary Government".
Today Grenada is a member of the commonwealth.

Comment: For myself, when Grenada began mainly featuring Disney characters, it went off the stamp rails for me. But the stamp hobby is a large tent, and big enough for everyone. ;-) 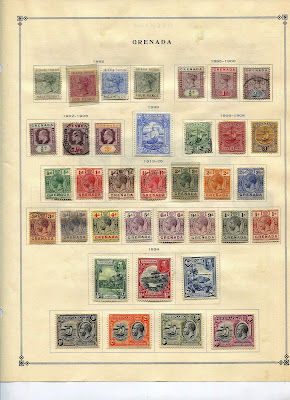 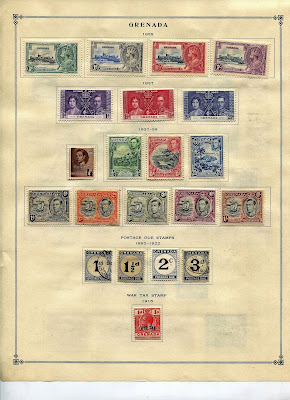 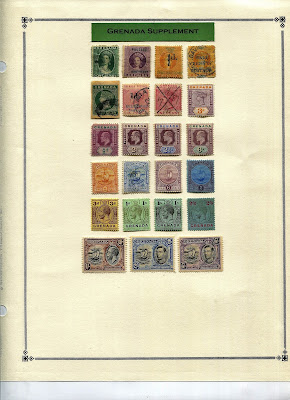