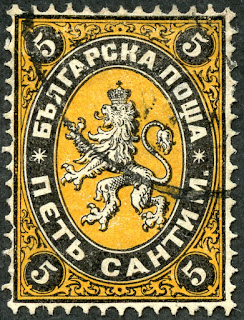 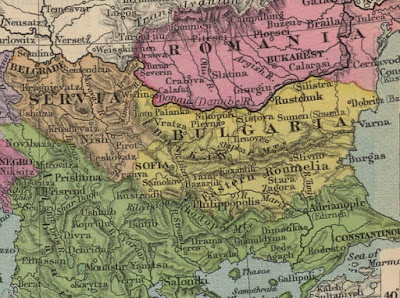 Bulgaria (Yellow) 1899
The original post on Bulgaria with the BB checklist is here.

A post on the 1902 "Battle of Shipka Pass" issue and the forgeries is here.

For a closer look at Bulgarian issues, we will split the coverage into two posts. 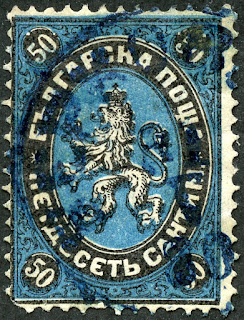 1879 Scott 4 50c black & blue
"Lion of Bulgaria"; Wmk 168; Laid paper
I should mention at the outset that Bulgaria was nominally a principality under the Sultan of Turkey when the first issue (1879) was produced. However, the Treaty of Berlin (1878) affirmed the autonomy of the Principality of Bulgaria. In 1885, Bulgaria was joined by Eastern Rumelia. Formal independence from Turkey was recognized in 1908.

The first five stamp typographic issue was released May 1, 1879, and featured the "Lion of Bulgaria". The bi-colored stamps were denominated in Centimes/Franc. 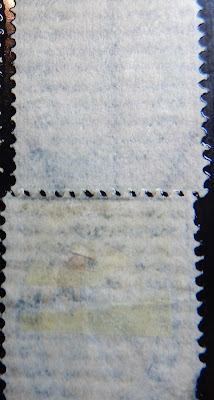 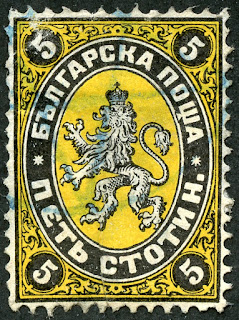 1881 Scott 7b 5s black & yellow
"Lion of Bulgaria'
The April 10, 1881 six stamp issue, necessitated by a change in denomination to Stotinki/Lev, is also bi-colored.

There are minor number shade differences for a denomination recognized in the catalogue. Shown above is Scott 7b "black and yellow", while the major number is "black & orange". 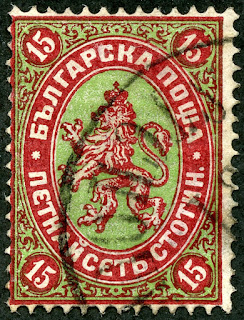 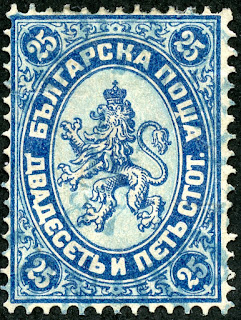 1882 Scott 16 25s blue & pale blue
"Lion of Bulgaria"
The December 4, 1882 seven stamp bi-colored "Lion of Bulgaria" issue is in different color combinations compared to the same denomination for the 1881 issue. There should be, therefore, little confusion between the issues. 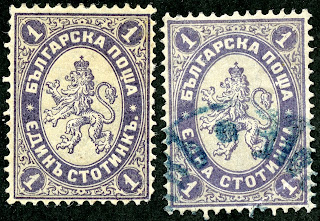 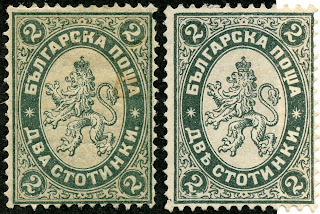 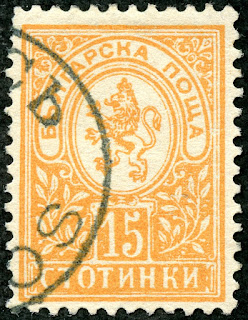 1889 Scott 33 15s orange
Wove paper; Unwmk
We now switch over from laid paper to wove paper (unwatermarked) for the ten stamp 1889 issue.  The "Lion of Bulgaria" is a much smaller vignette with this design.

There are also many shades that can be found for the issue, although Scott gives no information on this either. 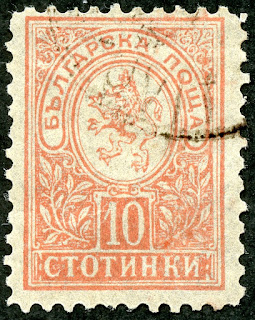 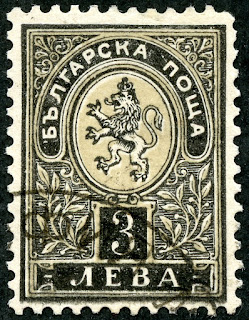 1896 Scott 42 3 l black & buff
In 1896, two more Lev denominations (2 l, 3 l) were issued. Scott notes that the paper is watermarked "Coat of Arms in the Sheet", but I found nothing on my my two example stamps. Scott states that stamps from sheet edges show no watermark. 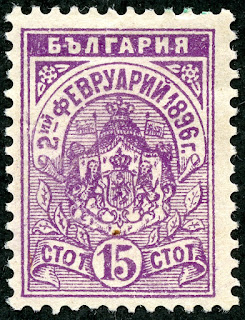 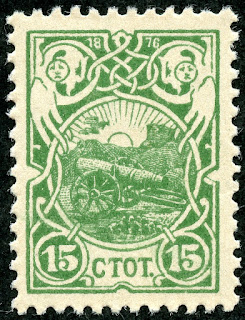 For the 25th anniversary of the Insurrection of Independence of April, 1876, a a two stamp issue release was prepared. 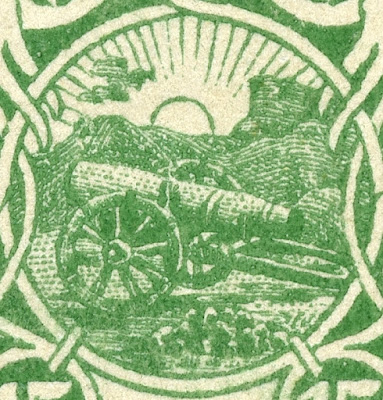 "Cherry Wood Cannon" Close-up
It was lithographed (forgeries exist), but I find the design particularly appealing. During the uprising, the Bulgarians used 52 cherry wood cannons against the Ottomans. 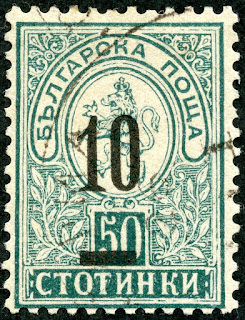 I should mention that surcharges on 19th century Bulgarian stamps has also been the playground of forgers. Specifically, the eight stamp surcharged issues of 1884 and 1885 (in black, carmine, or vermilion), Scott 19-22, which have high CVs ($80-$2,000) have been extensively forged. 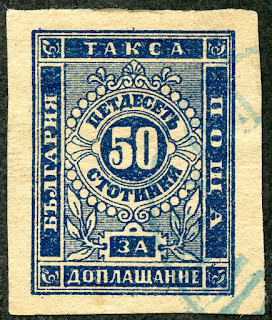 Postage Due 1896 Scott J6 50s blue
Imperforate
The only other category of stamp (besides regular issues) that existed during the Bulgaria 1879-1901  era was the postage due. 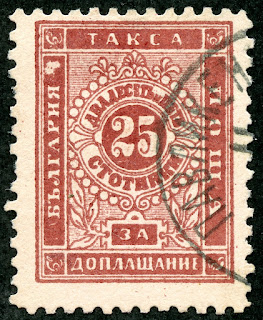 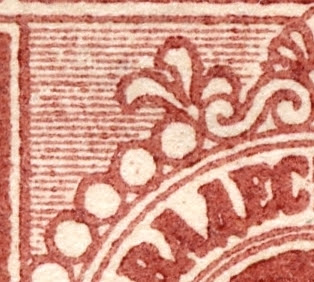 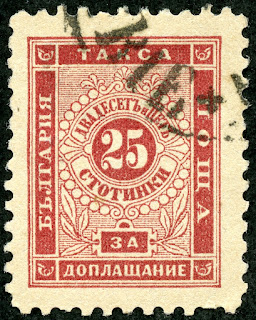 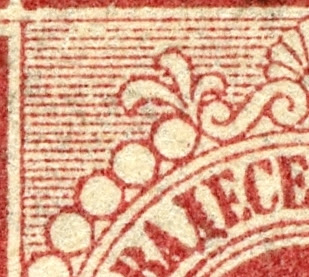 Scott J11 Closeup
Redrawn - 24 Horizontal Lines
There are 24 horizontal lines ( not including the upper horizontal frame line of the same thickness).

Scanning the stamp makes it much easier to count! 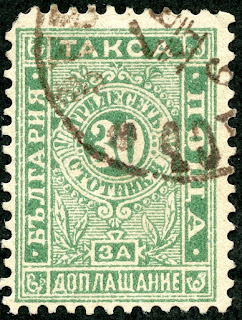 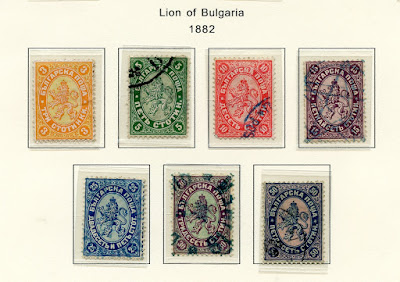 1882 Issue "Lion of Bulgaria" in Deep Blue
Deep Blue (Steiner) has six pages for the 1879-1901 stamps of Bulgaria. All of the major Scott numbers have a space. 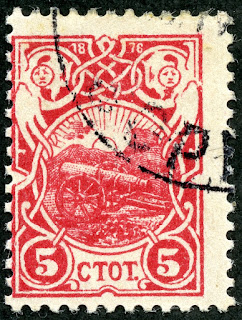 1901 Scott 53 5c carmine
"Cherry Wood Cannon"; Lithographed
Out of the Blue
Hope you enjoyed this overview.

Note: Map scan appears to be in the public domain. The links to Bulgarian forgeries is to the Stamp Forgeries of the World website. Thanks to Morten Munck (Denmark) for creating this resource.