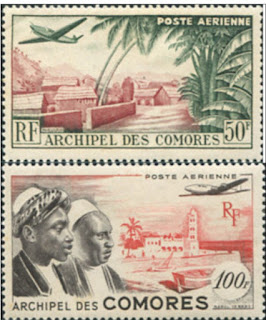 Grand Comoro’s 19th and early 20th century stamps aren’t so grand. France issued the same boring stamps for Moheli, Anjouan, and Mayotte, the other islands in the archipelago north west of Madagascar. And for a lot of other colonies, too, including Madagascar. You could wallpaper your spare bedroom with them -- the ubiquitous “Navigation and Commerce” series.

BB provides spaces for only a few of them, thankfully. Some collectors find clean-cut Grand Comoro cancels interesting, especially cancels on the red and black overprints, for these were used throughout Madagascar. Alas, I have none.

By 1950, when stamps were again issued for these islands, French designs had improved greatly.

Census: 17 in BB spaces, nine on the supplement page.

Big Blue has a great selection here, as all ten surcharges are given a space for the 1912 issue. And the rapidly more expensive 1897-1907 "Navigation and commerce" issue is given a generous seven spaces.

If BB did this for every country, there would be no need to look elsewhere by the "frugal" classic era collector. 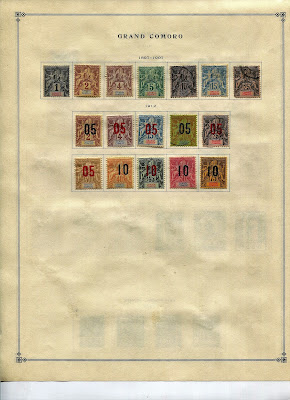 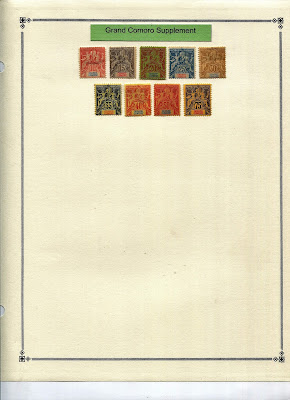