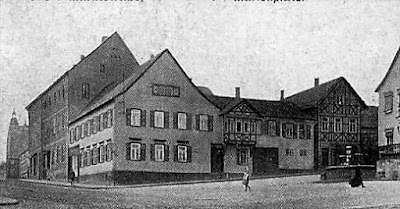 During the three-year transition from German States to the German Empire (1867-70), the North German Reichstag legislated policies intended to unify the emerging country, among them common passports, use of the metric system of weights and measures, a consolidated penal code, and a unified postal system with new stamps.

Curiously, the two existing forms of currency were not changed -- groschens for the north and kreuzers for the south. This, of course, explains the difference between the Hamburg cancels (see below line one) and the Hildburghausen cancel (line two): groschen and circular design for Hamburg in the north, kreuzer and oval design for Hildburghausen in the south. The Hildburghausen cancel (23 May 1869) would have been struck in the building pictured above. In years before the North German Confederation, this likely was a stopping station for yellow Thurn andTaxis stagecoaches.

Jim's Observations
The North German Confederation (Norddeutcher Bund) was a federation of independent "states" formed in 1866-67. This confederation had various Kingdoms, Grand Duchies, Duchies, Principalities, and Free Hanseatic cities, 22 of them in all, come together as the first "modern" German Nation State.

For stamp collectors, that meant the German States of Prussia, Saxony, Oldenburg, Brunswick, Bremen, Hamburg, and Lubeck ceased issuing their own stamps. ( Hanover and Bergedorf  had already ceased, having been subsumed into Prussia and Hamburg respectively.)
Stamp production for the North German Confederation existed between 1868-1870.
Although not a German State, the House of Thurn and Taxis had a postal monopoly with horse drawn mail coaches throughout Europe. They had Northern District stamps (In Silver Groschen), and Southern District Stamps (In Kreuzer). When the North German Confederation was developed, Thurn and Taxis had to sell its monopoly in 1867. 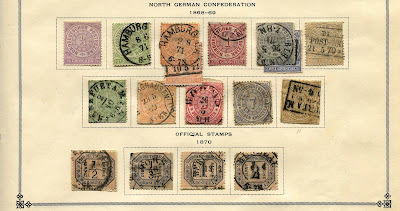