Much has been written about German stamps and postal history, so I’ll restrict what I write here to thoughts about the stamps shown in the scans and my collecting experiences with them.

Because many US collectors like German stamps, they’re commonly found in feeder albums. Persistent non-specialists can amass nearly complete collections. BB helps by providing 70% coverage. And, except for the rarities, German stamps don’t cost much. So, my BB pages filled up quickly, although the early issues were elusive.

I like cancelled stamps, so I look for date and place visible examples such as those showing below for 1872. Unfortunately, German postal clerks tended to be hyper cancellers, sometimes striking three times or more to discourage recycled used stamps. Early British stamps suffer similarly. Finding neat, single-strike cancels presents a challenge. I’m still working on it.

There are a few Zug and Bahnhof ambulant [1] cancels in the scans. I’d like more of them. Train enthusiasts snap these up quickly when they come on the market.

I can’t resist remarking about Germania, the battle-girded, sword-wielding female allegory on many German stamps of the 1872-1921 era. Such national allegories, all heirs of Athena [2], commonly appear on classic stamps. But none of Germania’s stamp-gracing sisters -- Helvetia, Britannia, Hispania, Hope and Zealandia, among others -- are so gladiatorial. These others are not so much warriors as pliant patriotic puppets that remind men what they’re fighting for. Germania brooks no such sentimental gush. She, chin set and eyes aglare, means to fight. And, a few years after her philatelic debut, she did.

The Great War  found Germany with two weak allies: Austria-Hungary and the Ottoman Empire. The Central Powers were defeated , and by the end of 1918 Germany had signed the Armistice and the Empire collapsed.

This post will show the stamp issues in Bud's Big Blue through the 1900-1921 "Germania" design and the end of the German Empire.

The Treaty of Versailles with the heavy penalties, the Weimar Republic, hyperinflation, and the rise of the Nazis with all the myriad stamp issues will be featured in Bud's next post. 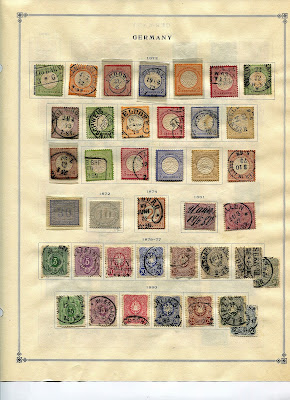 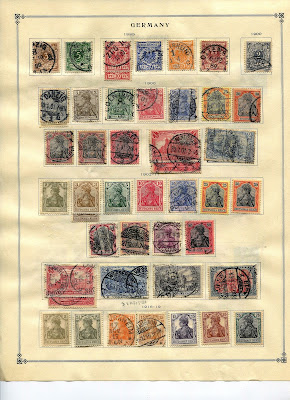 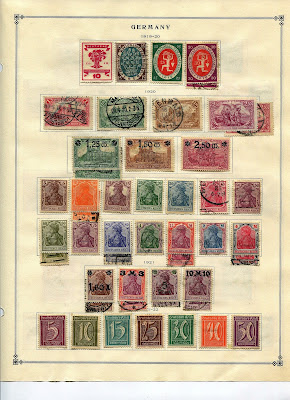 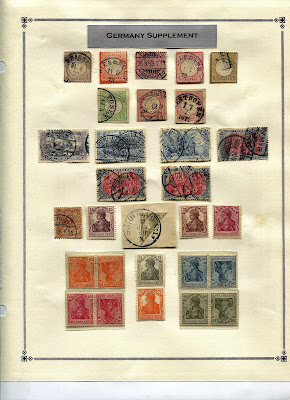