The Lion of Judah, Symbol of Ethiopia, 1897-1974,
and a title of Emperor Haile Selassie
Bud's Big Blue
Bud's Observations

The history of Ethiopia’s stamps is full of intrigue and deception, but for patient collectors the rewards are great. Here’s where to start.
·         Learn a little Amharic, at least how to count.
·         Frequently consult Doig’s Ethiopia Stamp Catalog (http://www.doigsden.com/EthiHome.html) and the Ethiopian Philatelic Society (http://ethiopianphilatelicsociety.weebly.com).
·         Read Ethiopian history. Do internet searches on Alfred Ilg, the Swiss confidant of Menelik II and midwife of Ethiopia’s first postal system.
·         Combine study Ethiopia’s stamps with those of Eritrea, Italian Somaliland, French Somaliland (Djibouti) and Obock.
·         Buy or borrow two books by Roberto Sciaky: Ethiopia, 1867-1936: History, stamps and postal history (Vaccari, 1999, separate addendum 2001), and Ethiopia, 1935-1974: History, stamps and postal history (Vaccari, 2003).
·        Tolerate forgeries, especially of anomalies, cancels and overprints.
Have I done all the above? Well, no, but I’ve started -- got the books and scratched the internet a little. More will have to wait until I’ve finished making scans for Jim’s blog.
My scratching so far has to do with the cover on the last supplement page. The address looks to be penned by Alfred Ilg, one of the few people in 1901 authorized to send mail. The postage is correct for letters to Germany via Djibouti. There are appropriate postmarks and backstamps (not shown). It was mailed on May 11, 1901, two months before Ethiopian stamps needed overprints to be valid. The addressee is Julius Seeth, the famous lion trainer who at the time owned the world’s biggest performing pride (24 of them).
So, the lion tamer gets a message from the Lion of Judah.
Sound too good to be true? I think so, too. Add skepticism to the above list.


Census: 78 in BB spaces, 13 twelve tip-ins, 56 on supplement pages. Eighteen added since scans were made.
Jim's Observations
A) Ethiopia is a specialist's delight! Numerous overprints ( with errors), and not too expensive. I wouldn't mind delving deeper into Ethiopia.B) BB only gives the BB collector the "tip of the iceberg". The major issues are given a space, but as stated in A), there is so much more.C) Many of the major issues ( 1919 Scott 120-134, 1930 Scott 210-216, 1931 232-241, Air post 1931 C11-C17) in BB have reprints that are much cheaper. If one wants to be aware of them (and not pay too much for a "reprint"), one will need to be aware of the paper, ink and gum for each issue. The specifics are in the Scott catalogue.D) Amharic script is tough to decipher sometimes, including the denomination. One will need to pay particular attention.E) Plenty of stamps-mostly surcharge/overprinted- that are inexpensive (<$1-$2+), and did not make it into BB- I found 117! 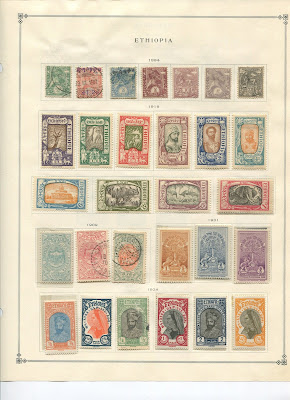 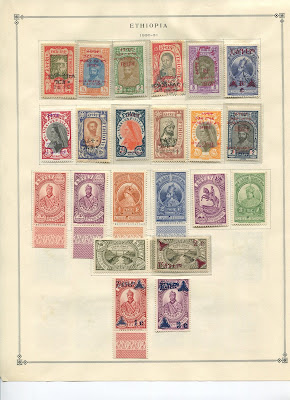 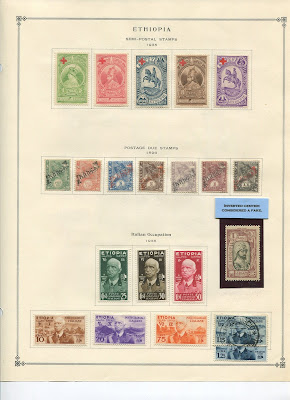 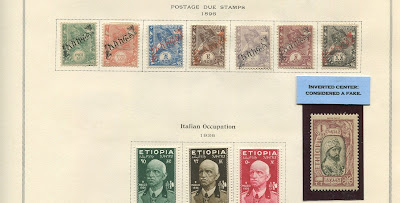 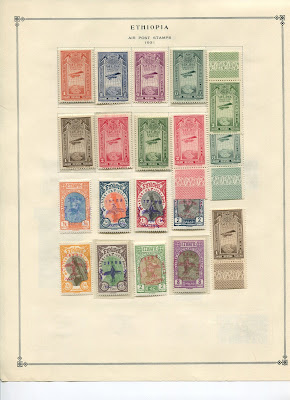 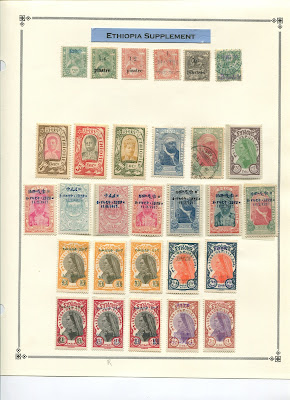 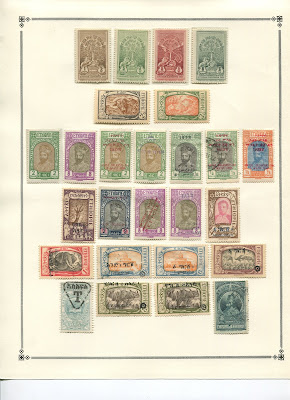 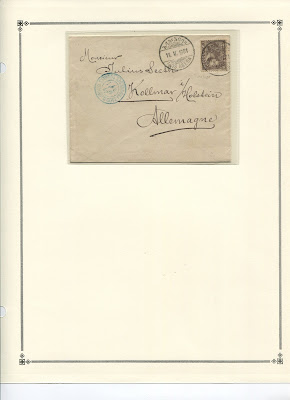