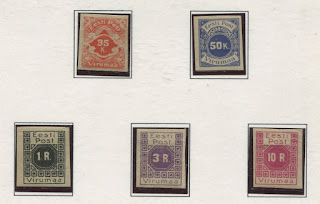 If you’re building a collection by pillaging feeder albums, as I have, occasionally you’ll encounter phantoms. The previous owners, not knowing what else to do, stuck them in BB’s blank spots or laid them between pages. Some phantoms, the mischievous frauds, mean only to bilk unsuspecting collectors. Some want to cheat on postal rates. But the subversive sort aim to wreak political havoc.

What intentions did the five shown above have? When they first appeared in 1918-19, many thought they were genuine. Scott lists but then quickly withdraws them and, in a monthly journal, labels them “bogus” with the warning, “Collectors will be well advised to have nothing to do with them.”

Conjectures about their origins, nevertheless, proliferated. Did a German speculator create them for personal gain? Did bolshevists print them to legitimate their attempts to gain control? Was someone trying to subvert the newly founded Estonian postal authority? Why is “Virumaa,” an ancient region of Estonia, inscribed?

I like such mysterious phantoms and happily include them on supplement pages. Phantoms ought to be considered a part of postal histories and, further, regarded as suitable for “representative collections.”

Jim's Observations
* The 1928-35 "Arms" issue and others of that era have an interesting colored network design embedded on the paper, no doubt to prevent re-use or counterfeiting. I believe the 14 stamp "Arms" issue has at least nine different web colors. Nice!
* The Estonian stamps found in BB are reasonably priced. The most expensive stamp space is for a triangular 1923 Air Post C3 (15m on 5m multi, a C1 surcharged in red) at $16; while the next most expensive is a 1939 Coat of Arms Semi-postal  B44  (50s + 50s brown lake) at $14.
* During the years 1936-1940, Estonia issued a Semi-postal four stamp "Coat of Arms" each year consisting of the armorial bearings of various districts. All of the issues (except 1936) are in BB. They usually are in the $3-$8 price range. They are highly attractive stamps. 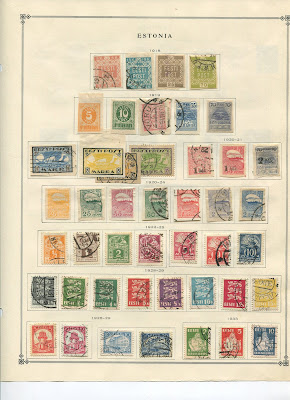 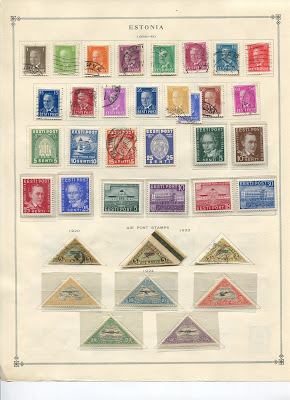 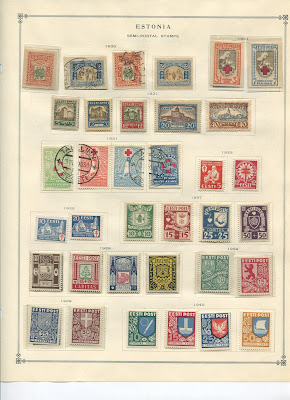 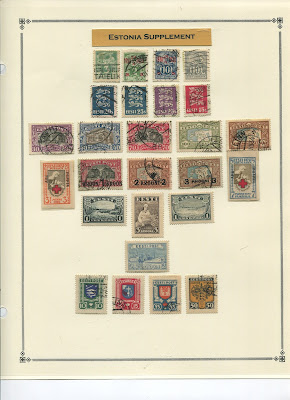 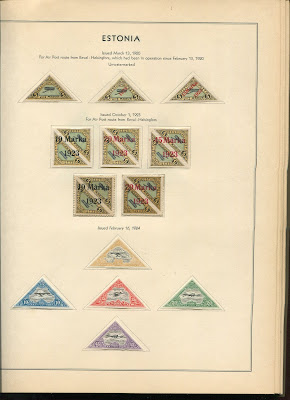