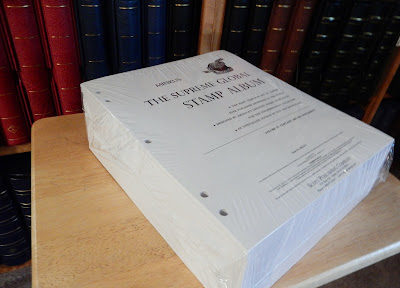 Part 4: 1967-70 Minkus Supplements
Beyond the Classic Blues
Although my collecting interest has been heretofore discovering the WW classical stamp era, I've turned my focus recently to the stamp issues of the 1940s through the end of the 1960s.

If you would like to read more about the rationale, review the recent Beyond the Classic Blues: An Introduction post.

Yet the question remains: If one is going to collect WW beyond the classics - what would be a good cut-off date?... If any?

Every WW collector will answer that question in a different way, depending on their own interests, their tolerance for "stamp relevancy", and their willingness to drink more and more water from a fire hose (Increasing volume of stamp issues), to use a metaphor.

What is mine? Let's explore... 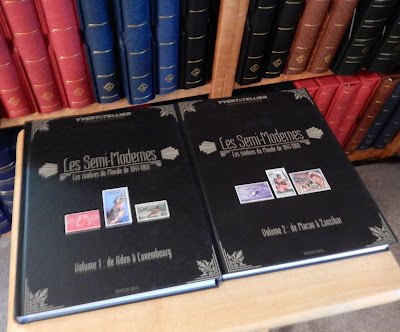 Yvert Les Semi-Modernes 1941-1960 WW Two Volume Catalogue
Yvert has a catchy term for the immediate post classical era: The Semi-Modernes. I agree that the 1941-1960 stamp period was a simpler time - the stamps were (still) mono-colored for the most part, the stamp themes had relevancy for the country, and postal authorities had not yet figured out in a systematic way how to financially exploit the collector to the max.

And this is the period of WW II and the aftermath. New countries came into existence. Some found themselves under the hegemony of the Soviets.

The cold war was born.

This was also the era where home grown patriots began to throw off colonial shackles, although this effort often lasted for another 5-20 years.

And the stamps themselves are generally inexpensive during this time. 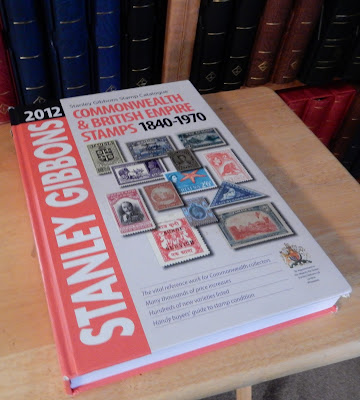 New countries were free to have their own themes on stamps, not just showing another stodgy monarch, or a design primarily dictated by the mother country.

Should be a no-brainer for the WW collector, right?

Well, there were countervailing tendencies that give a collector pause.

* The rise of topical collecting, with the increasing flood of issues featuring bird, flower, painting, space, Olympic etc themes. If the topical issue is directly relevant to the country, that would be generally acceptable for many collectors. What about issues that have only tangential topical relevance for the country? And then consider the rising volume of topical issues (and expense to collect)!

* The rise of postal administrations who view the collector as a cash cow. If one is a poor country with a small literate population, how many issues before it is exploitative?

* The sheer volume. Even if the stamps are relevant culturally, will they become a chore to collect because of the increasing output? (Drinking from a Fire Hose problem.)

I don't have a great definitive answer, but my gut feeling is WW collecting ran into trouble in the 1980s. Too much of the negative variables outlined above. Of course, one could still collect countries that did not succumb.

Frankly, I'm also ambivalent about the stamps of the 1970s. For one, I don't care much for some of the stamp designs. I find the U.S. stamps of the era often positively ugly. Sorry, but there is no accounting for taste.

But, I am naturally interested in history that I lived through (Vietnam War era), and I am still very much fascinated by culturally and geographically relevant stamps, regardless of when they were issued. So, I haven't yet made up my mind about the 1970s.

And so we finally come to the direct question for this blog post - a review of the 1967-70 stamp era using the Minkus Global pages. 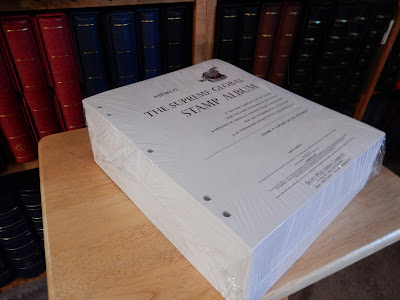 Amos Advantage offers the 1967-70 supplements for the Global Supreme album ("Big Red"), and calls them "Part 4"(Cost: $255). They are on thick paper, and are two hole punched for Minkus two post binders, and three hole punched for the standard (American) three hole ring binder. I take advantage by putting the pages in 1 1/2" heavy duty Avery D-ring binders. Pages can be quickly moved or added (quadrilled pages), and clear interleaving  sheets can be added as needed. The 1 1/2" D-ring binders are easily handled, compared to the large heavy 4 inch Minkus binders stuffed with pages. It takes four of the D rings to house the typical pages found in one Minkus binder.

Note, Amos Advantage, at the time of this post, only offers Minkus Supreme supplements without a break through 1978; after that the availability is spotty throughout the 1980s-90s time period, and then the availability picks up again in the 2000's. 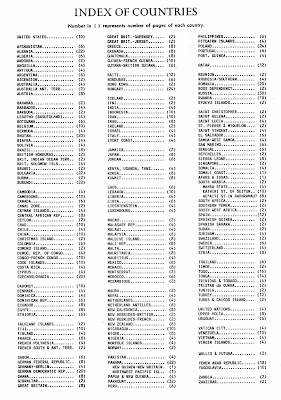 For that purpose, I have divided the Index into five scanned strips.

What stands out here are the number of pages required for Russia (30). Soviet sphere Albania (22), Hungary (24), Poland (24), and Romania (20) also have a high number. It should come as no news to collectors that the Soviets used stamps as a propaganda tool glorifying their achievements. And, perhaps to add some needed cash from collectors.

Actually, I have no problem with the stamp topics themselves during the cold war era for the Soviet countries, as the stamp topics, themes, and subjects are relevant to them.

A more normal stamp production for the era is reflected in the United States (10), Argentina (6), Austria (8), and Portugal (6).

But why does Qatar have 12? 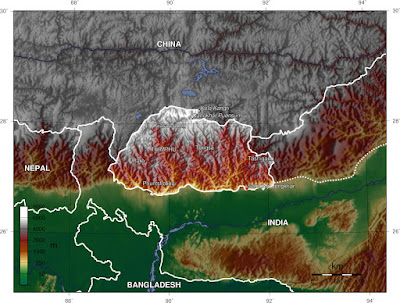 Bhutan
Then Bhutan has 20!

What a shame. I would have enjoyed culturally relevant stamps with a reasonable output from Bhutan.

This might be a good time to relate what is NOT in the 1967-70 supplements, and other Minkus time era supplements.

* "China" only consists of the "Nationalist Government in Formosa" (Taiwan) coverage.  And prior 1950-67 coverage of the People's Republic of China (PRC) is non-existent also. No doubt lack of coverage of PRC  is a Minkus cold war legacy. I asked  Amosadvantage about this, and they graciously sent me the Minkus Specialized "Peoples Republic of China" pages 1950-1973, printed on one side.

Other lack of coverage lacunae because of the "cold war" include:

* North Korea pages are not included.

* North Vietnam pages are not included.

One may need to add quadrilled pages or stocksheets to supplement the missing coverage.

Getting back to the excessive pages theme, Burundi has 22!

Denmark only requires 4 pages, while the Cook Islands 10!

Do you see what is occuring? The healthy allure of collecting culturally and geographically appropriate stamps is getting overwhelmed by counties (unfortunately, often the poor and/or newly born ones) who metastasize out, like an uncontrolled "stamp" cancer, essentially culturally irrelevant stamp issues.

The golden goose of general WW collecting is dying here.

Of interest, the Index does not include a significant addition to the 1967-70 supplement: 39 2-sided pages for the Trucial States (1961-68), consisting of the Omani States - Abu Dhabi, Ajman, Dubai,Fujeria etc.

In contrast, Paraguay has 32! This "stamp cancer" is quite virulent.

What is a WW collector to do? Well, every collector has their own opinion, but, for me, if  I continued with a WW collection into the 1970s, 1980s, or beyond, I would "prune" the countries of interest to those with a reasonable issuing policy, and those with relevant (for the country) stamp subjects. 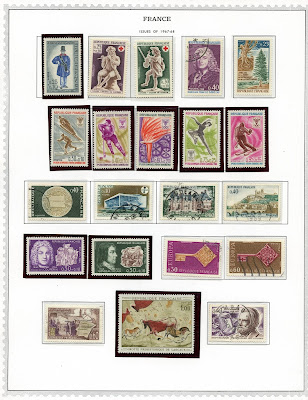 One can see for France that Minkus does tend to put a lot of stamps on a page, but perhaps not as many as they did for earlier years. Personally, I don't mind a "full" page: in fact I find it satisfying. 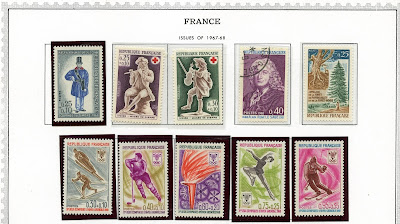 I must say I REALLY like French stamps (subjects + designs), and France would be one of the few countries I would have no problem with collecting their stamps all the way to the present. !! 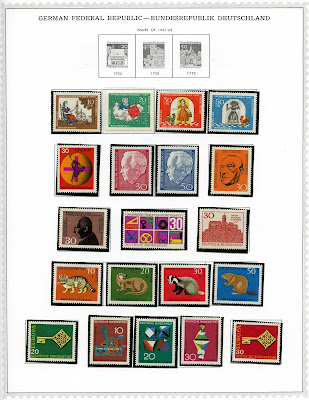 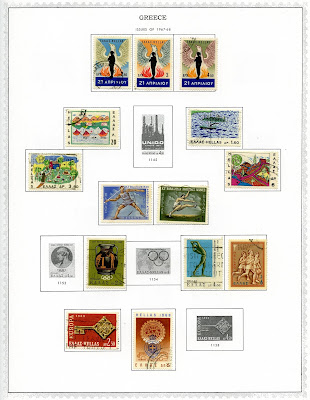 Greece 1967-68
Celebrating the long tradition of athletics in Greek culture is a fine subject for the 1968 Balkan Games issue.

Soldier and Rising Phoenix
Current history finds its way onto stamps: the Revolution of April 21, 1967. 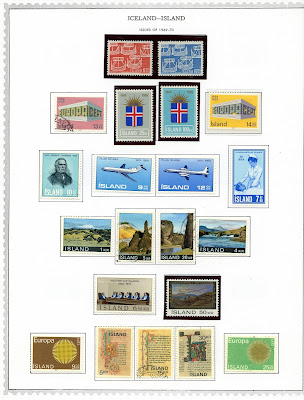 Iceland 1969-70
The "modern" stamps of Iceland, like the country, are both hot and cold. Some of the stamps are a little too plain.

I do like, though, the spare and clean design of these Iceland stamps. 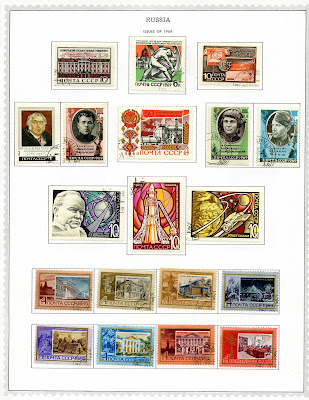 Russia 1969
Russia's output, of course, is on the high side. But I dare say that the stamp designs and subjects are more interesting then the U.S. stamps of the same era. 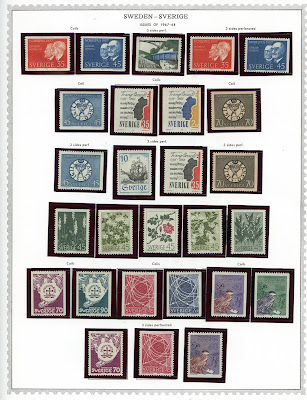 Sweden 1967-68
Swedish stamps have a reputation for quality: Many are engraved. 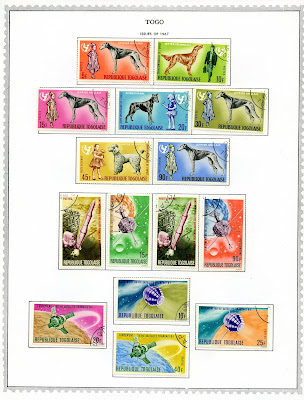 Togo 1967
Togo's stamps are colorful, perhaps because of the French connection. The topics, though, sometimes are borderline irrelevant. Why images of dogs on the 1967 UNICEF issue?

1967 French Achievements in Space Issue
The 1967 French Space issue is  nicely done, design and color wise, but I would rather have stamps more specific to Togo.

Not shown are well crafted 1966 "Arts and Crafts" and "Dancer" issues (ten stamps): now, these are appropriately designed relevant issues! 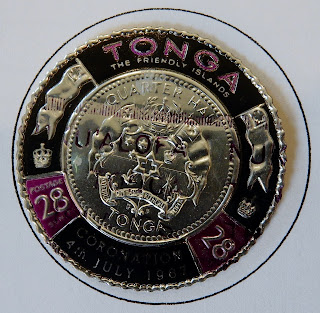 Tonga has been well known, since 1963, for their uniquely shaped stamp issues. And along with the eye catching shapes, their stamp issues are, with some exceptions, fairly relevant to their culture.

France 1967-68
Out of the Blue
Historically, collectors of the era had the same mixed feelings about output and relevancy, as evidenced by the American Philatelic Society's Black Blot program.

Well, you can tell that the stamp issues of 1967-70 WW are a mixed bag, from my point of view. But there are some gems; probably enough to make the collecting worthwhile overall.

What is your opinion?

Note: Bhutan map appears to be in the public domain.