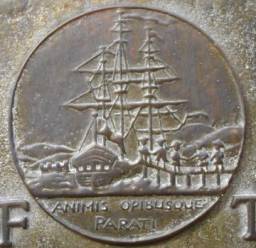 In Dominica’s 1903-22 series a small settlement rises on the dim and distant shore - Roseau, according to Scott’s Catalog, the island’s capital as it might have appeared to a passing sailor in the late 1800s. In the 1922-33 series, King George V looks as it he’s gazing at a badge showing a rising sun, a docked ship, and the same settlement, but it probably isn’t the same one. More likely it’s the Cabrits where the first shipping dock was constructed, with the distant settlement (fort?) being Portsmouth. Portsmouth, not Roseau, was initially intended to be the island’s capital. Opinions differ about which settlement is represented.
The stamps’ badge derives from a design commissioned by Dominica’s first governor (see above a bronze rendition). It bears the Latin inscription Animis opibusque parati, officially translated as "Ready with our lives and our resources,” an expression of confidence for meeting challenges. Bud’s free translation: “bring it on.” South Carolina claims the same motto, but translates it differently.  A later version inspired by this design omits, as do the stamps, the natives welcoming the ship’s officers and the motto, but adds the rising sun. See below.
Census: 48 in BB spaces, eight on supplement page

Jim's Observations
Quite attractive pictorials in the British Colonial design for this more obscure than most Caribbean island.
Pay attention to the  "Roseau, Capital of Dominica" design pictorials, as Big Blue leaves out about ten reasonably priced 1906-07 (wmk 1) and 1907-1920 (wmk 3) Chalky Paper varieties. You may find them in collections.
Speaking of watermarks, Dominica has all four of the Colonial watermarks represented. Might be a good time to sharpen one's abilities. Generally speaking, I find the colonial watermarks fairly easy to differentiate. Often, just turning over the stamp on a dark surface is all that is required! 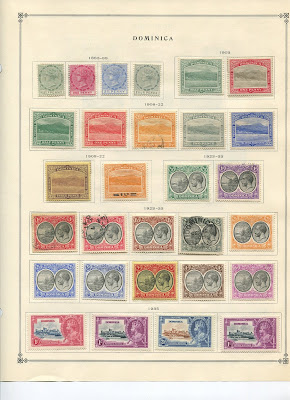 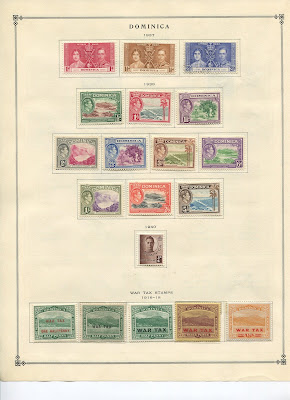 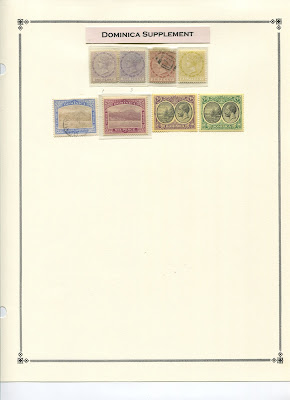 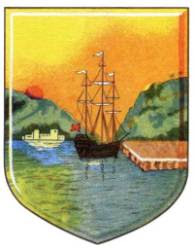