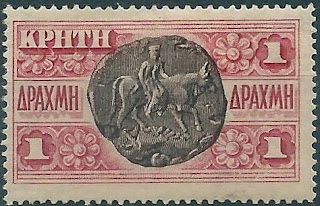 When I started writing this comment, I thought to summarize Crete’s postal history in a few paragraphs. I soon found that it’s not possible in so short a space. Cretan stamps pop up in BB’s Austria, Italy, Greece and France sections, and could have in Turkey, Russia and Great Britain -- all occasioned by Crete’s tumultuous history in the late 19th and early 20th centuries. Fortunately, Rienk Feenstra (and friends) wrote a careful study titled KPHTH - CRETE, Postal History (Athens, 2001) which I highly recommend.

The scans below begin with the British contribution, four stamps that are heavily forged. The clue to the genuine is the complete circle with a dot that appears above the numerals. Heraklion cancels are common on both genuine and forged copies. BB affords no space to the Russian contributions, but five appear on the supplement page, top row, four of which bear Rethymno cancels. Again, forgeries are common.

Crete’s own stamps often feature the reigning Greek King as well as ancient sculpture and coins (see above, Zeus as a bull abducting Europa). Adding to the complexity are stamps issued in 1905 by revolutionaries at Therissos (bottom of supplement page).

Census: 65 in BB spaces, six tipped in, 13 on supplement page

Jim's Observations
Hermes, Hera, Minos, and Triton; all part of the Cretan-Greek mythology. These "classical" stamps reflect the classical Greek era. Perhaps that is why I find these issues so very attractive

Big Blue presents a nice selection of these (mostly) classical mythology themed stamps. Included are four issues from the 1899 British Sphere Administration stamps. But there are 18 additional stamps from the 1899 Russian Sphere of Administration that are not in Big Blue, and could be collected. 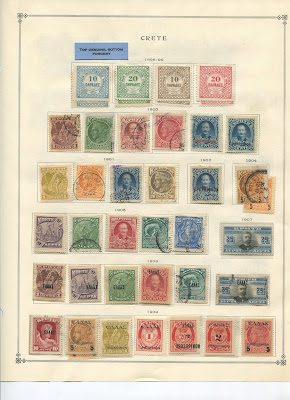 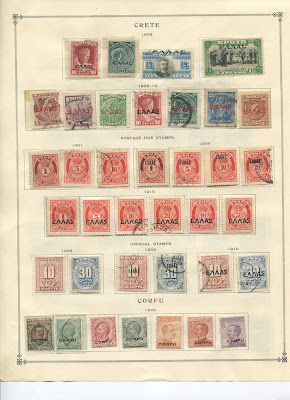 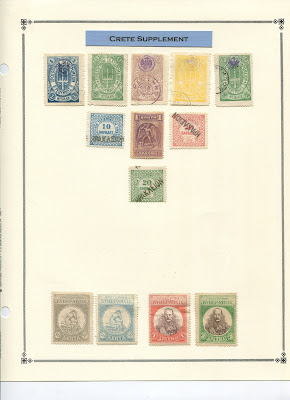