Albania- a closer look at the stamp issues 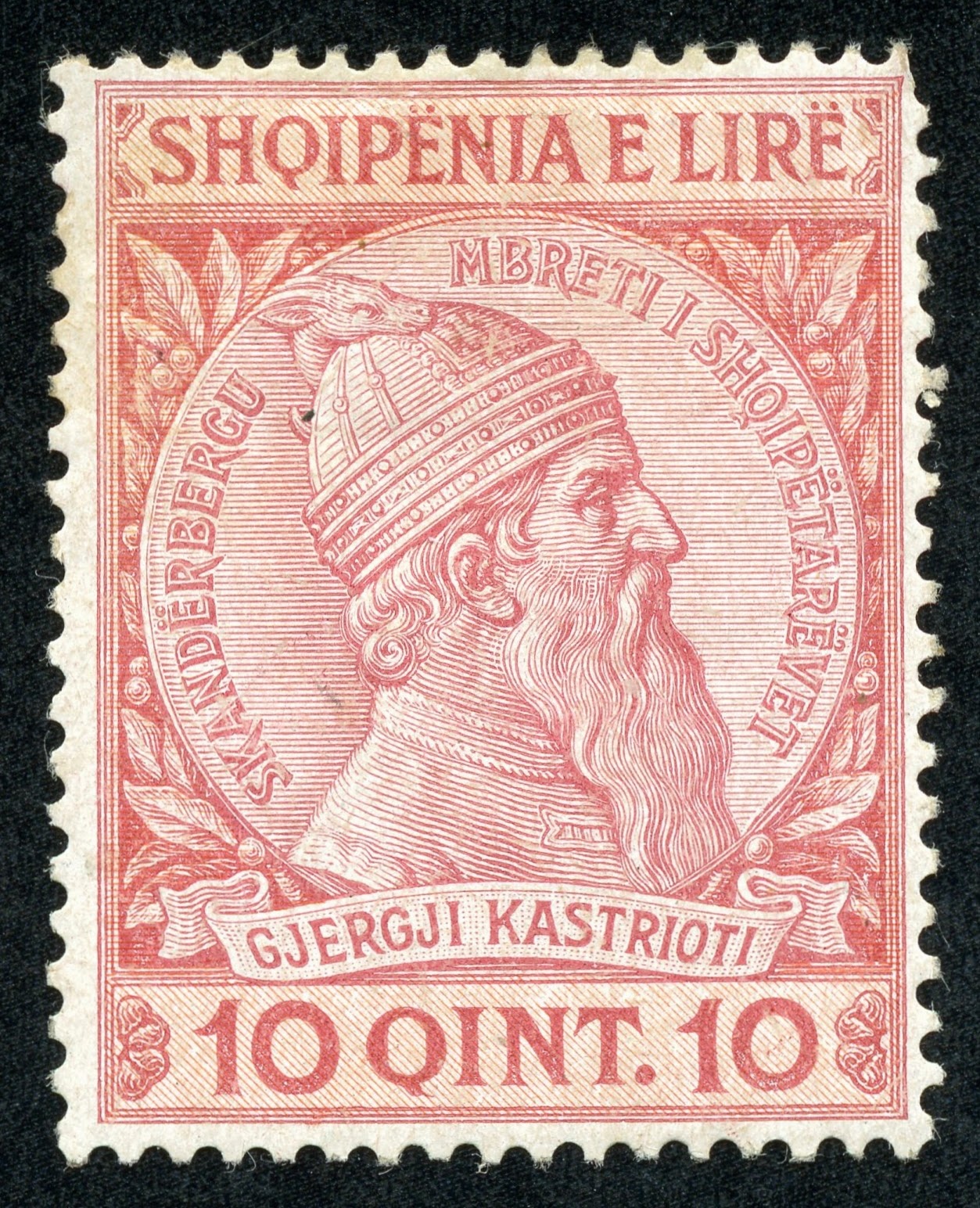 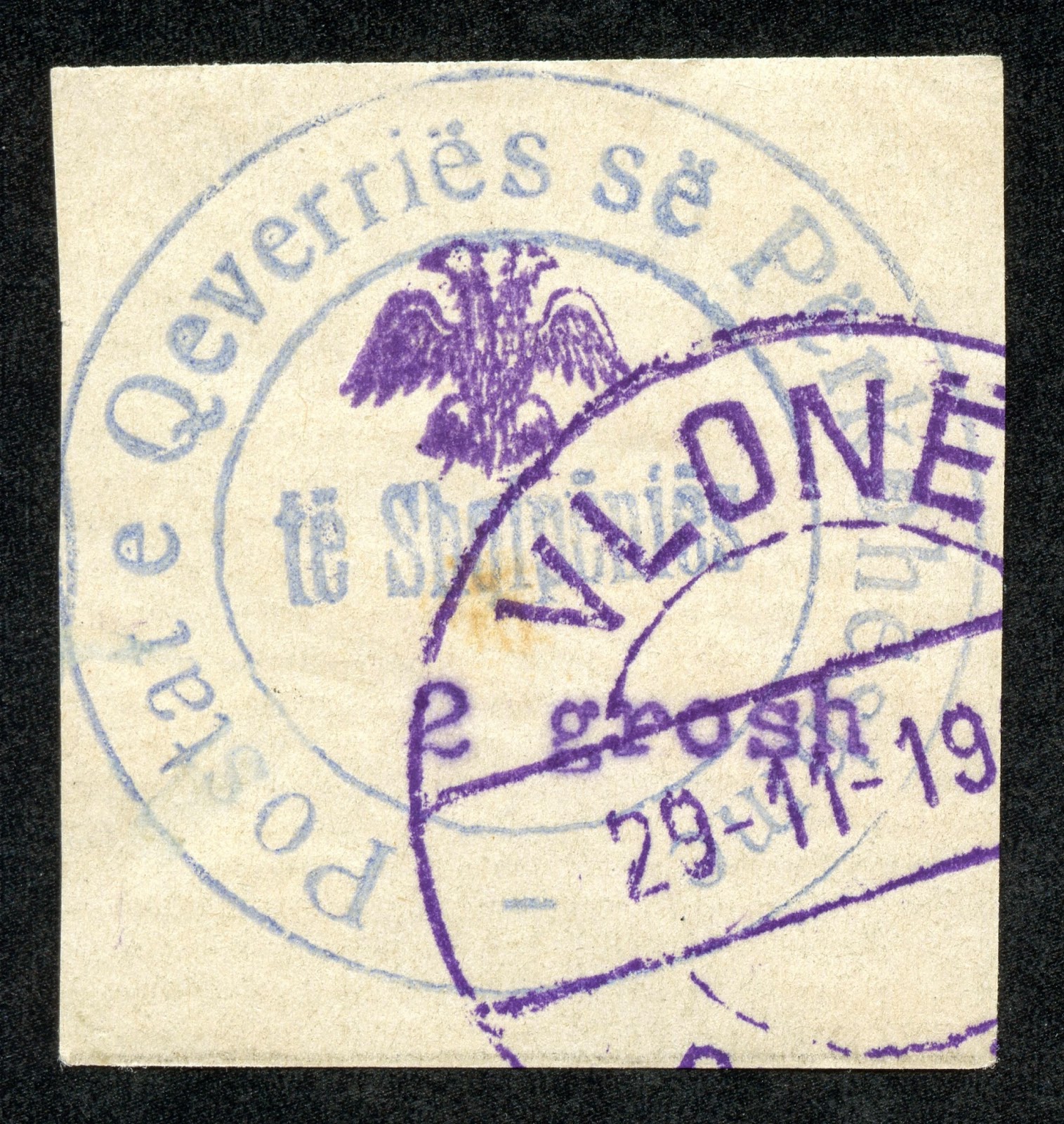 1913 Scott 24 2gr blue & violet
Scott has, from 1863-1883, a listing of Austrian Post in Albania (353 descriptive numbers!), which used stamps of Austrian Offices in the Turkish Empire, or Lombardy-Venetia stamps. All are expensive, and a specialist's delight. I will say no more about them.

Above is an interesting issue from 1914 which used a typewriter! to put in the value. I have no idea if it is genuine or not: I suspect the latter. One of the realities of WW classical collecting, even if one has a library of books on forgeries, is that the knowledge is often superficial and spread out, not deep. ;-) 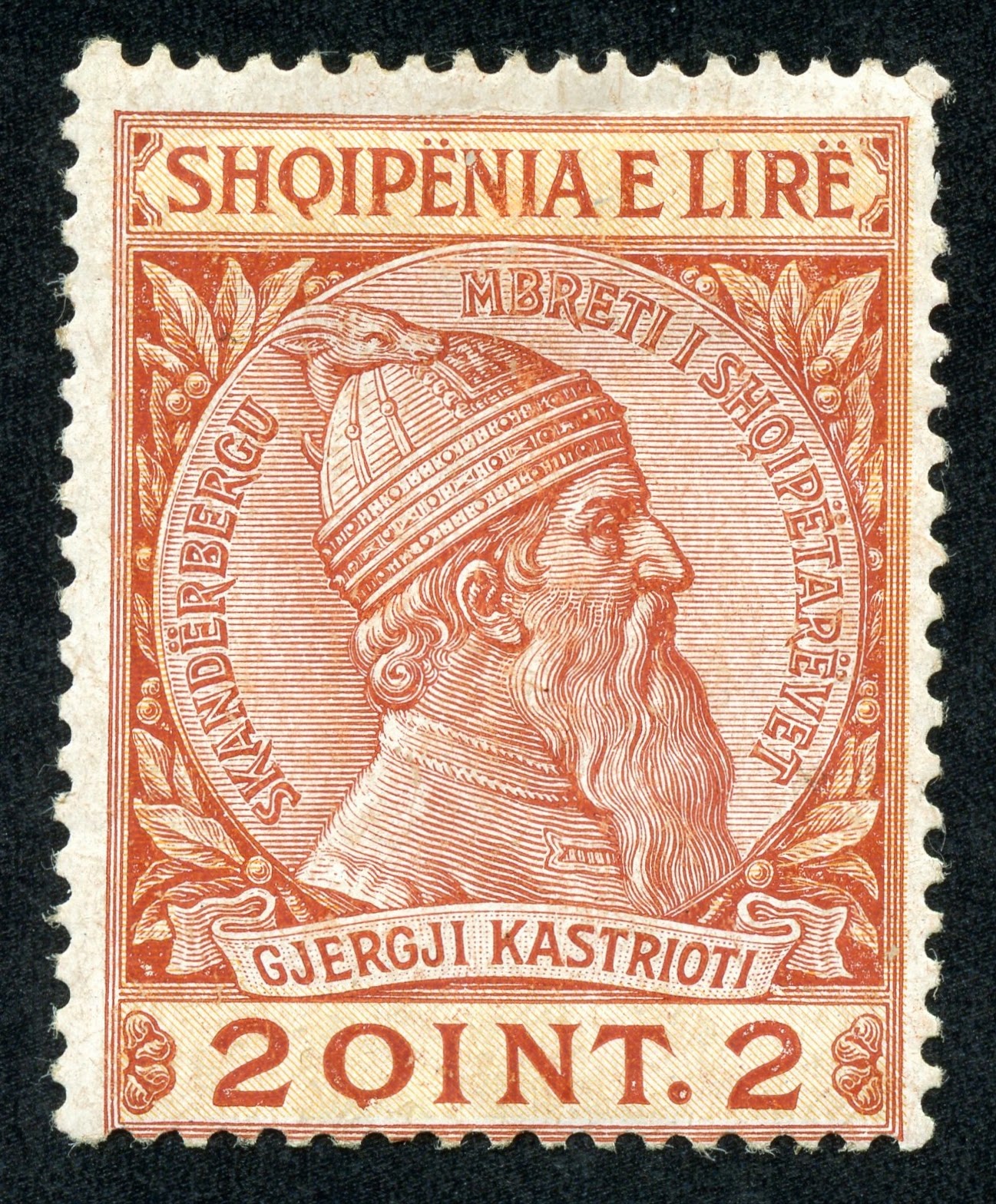 A 15th century Albanian nobleman, George Kastrioti Skanderbeg was highly effective in organizing Christian resistance against the Ottoman expansion. He is Albania's most important national hero. 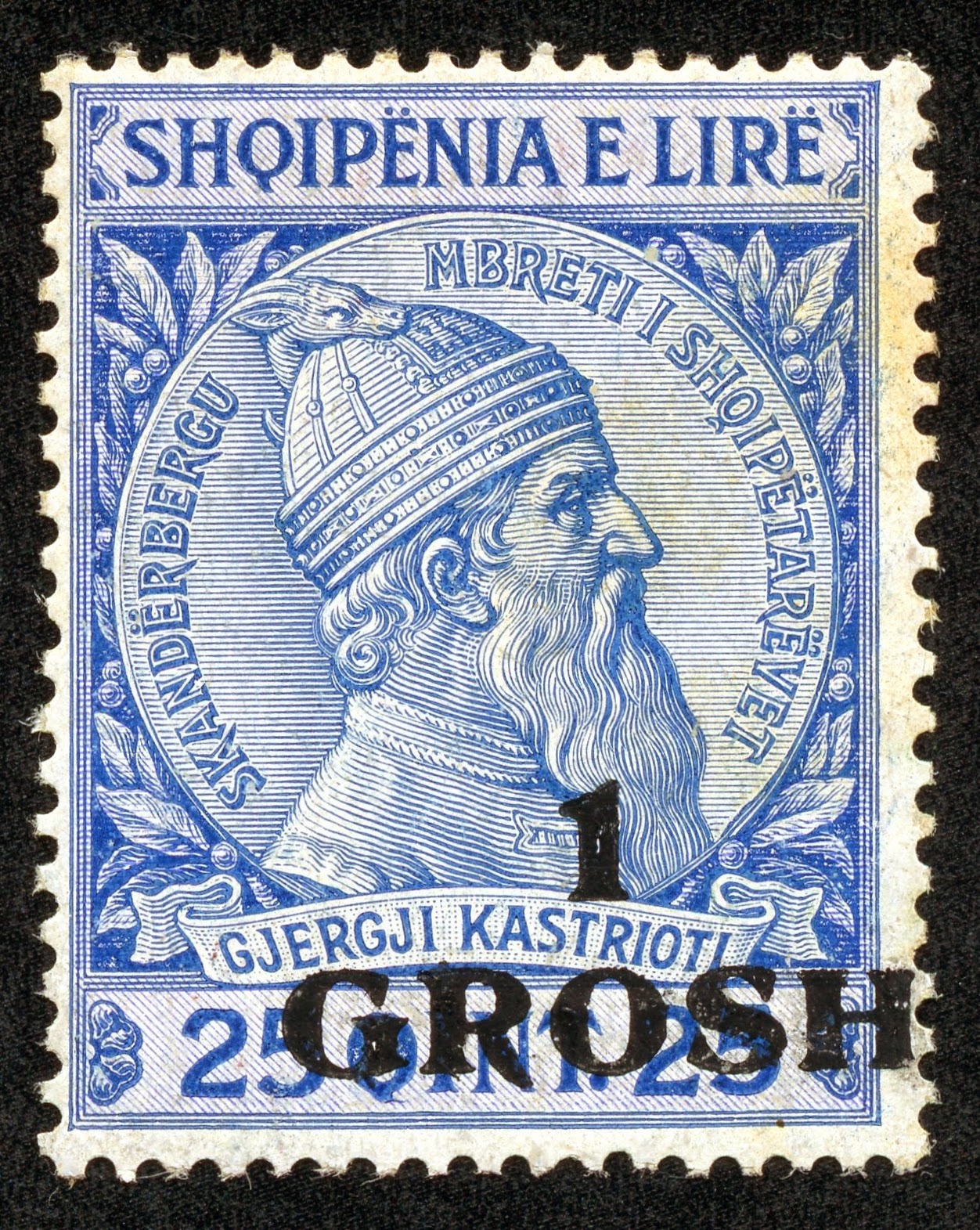 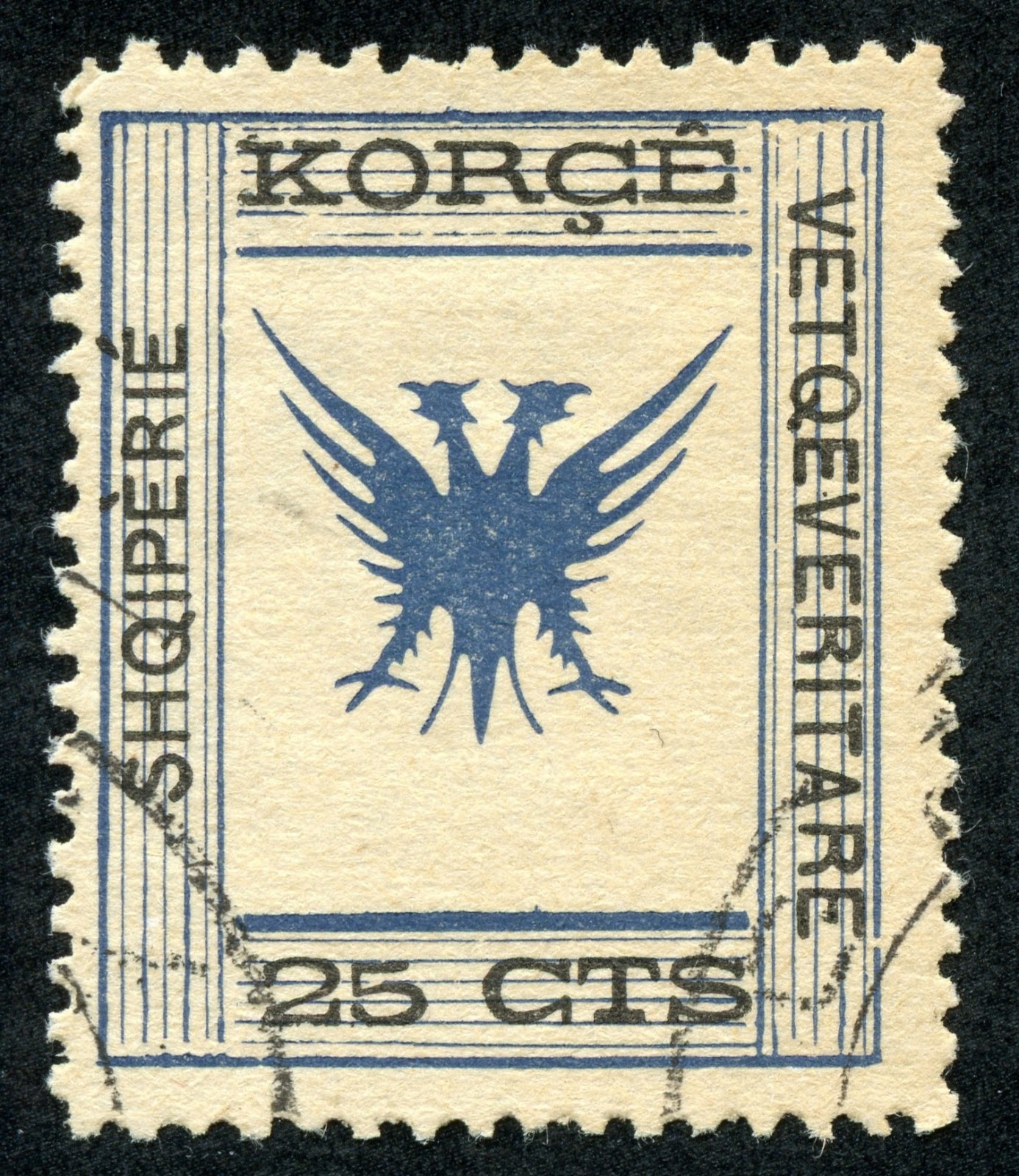 But this stamp is a forgery, as are most stamps in general collections. ;-)

A genuine stamp will not be so cleanly impressed, with small ink spots scattered around the eagle, and the wing tips will be attenuated or broken. 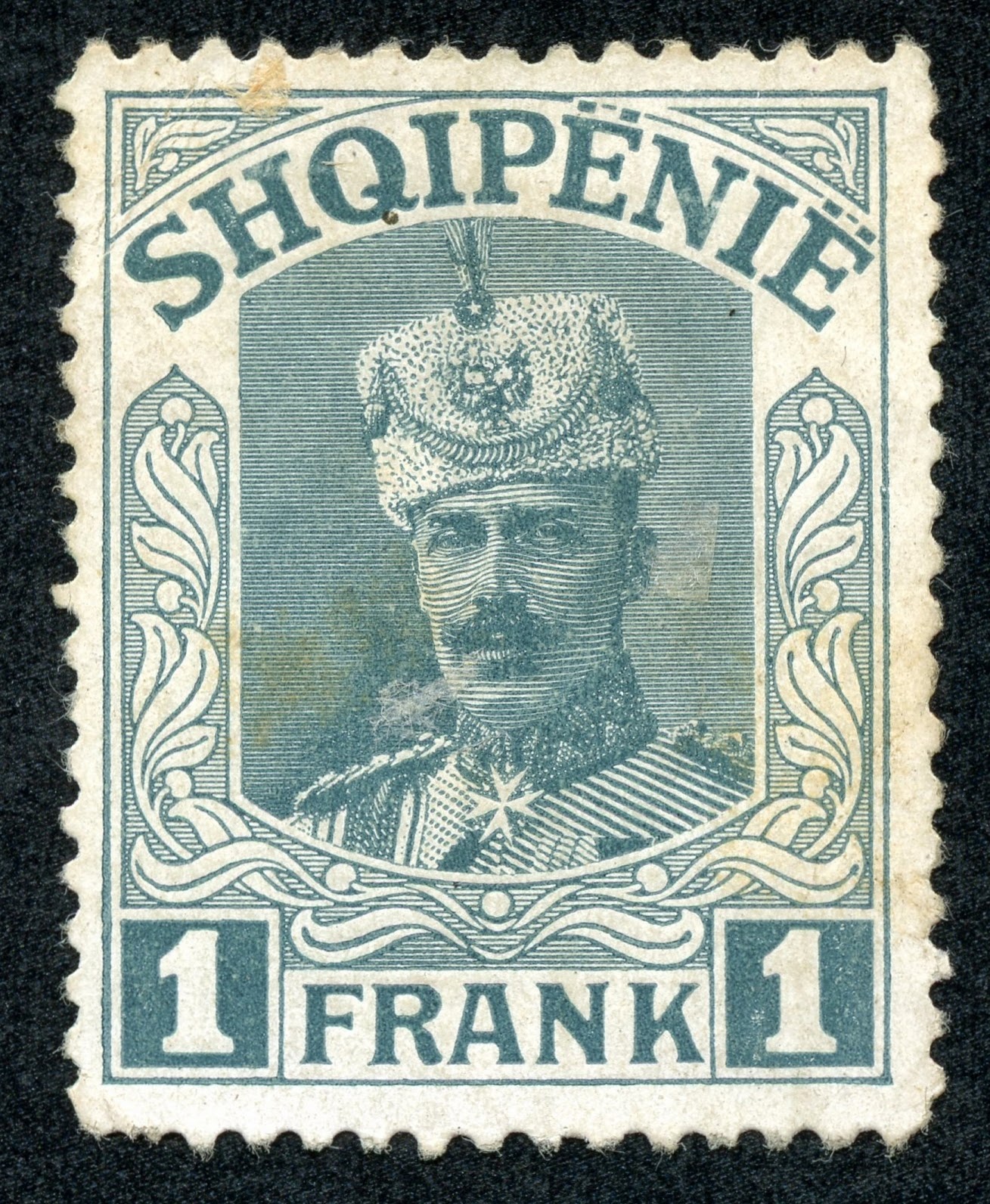 1 Frank green "Prince Zu Weid"
1914 (A14 Type)
Illustrating the chaotic Albania of 1914, the prepared but never issued original seven stamp set of Prince Zu Weid ( A14, and also the A15 issue) was probably stolen during WW I, and put on the philatelic market. They are not listed in the Scott catalogue. The overprinted or surcharged Type A14 and A15 stamps were finally issued in 1920. 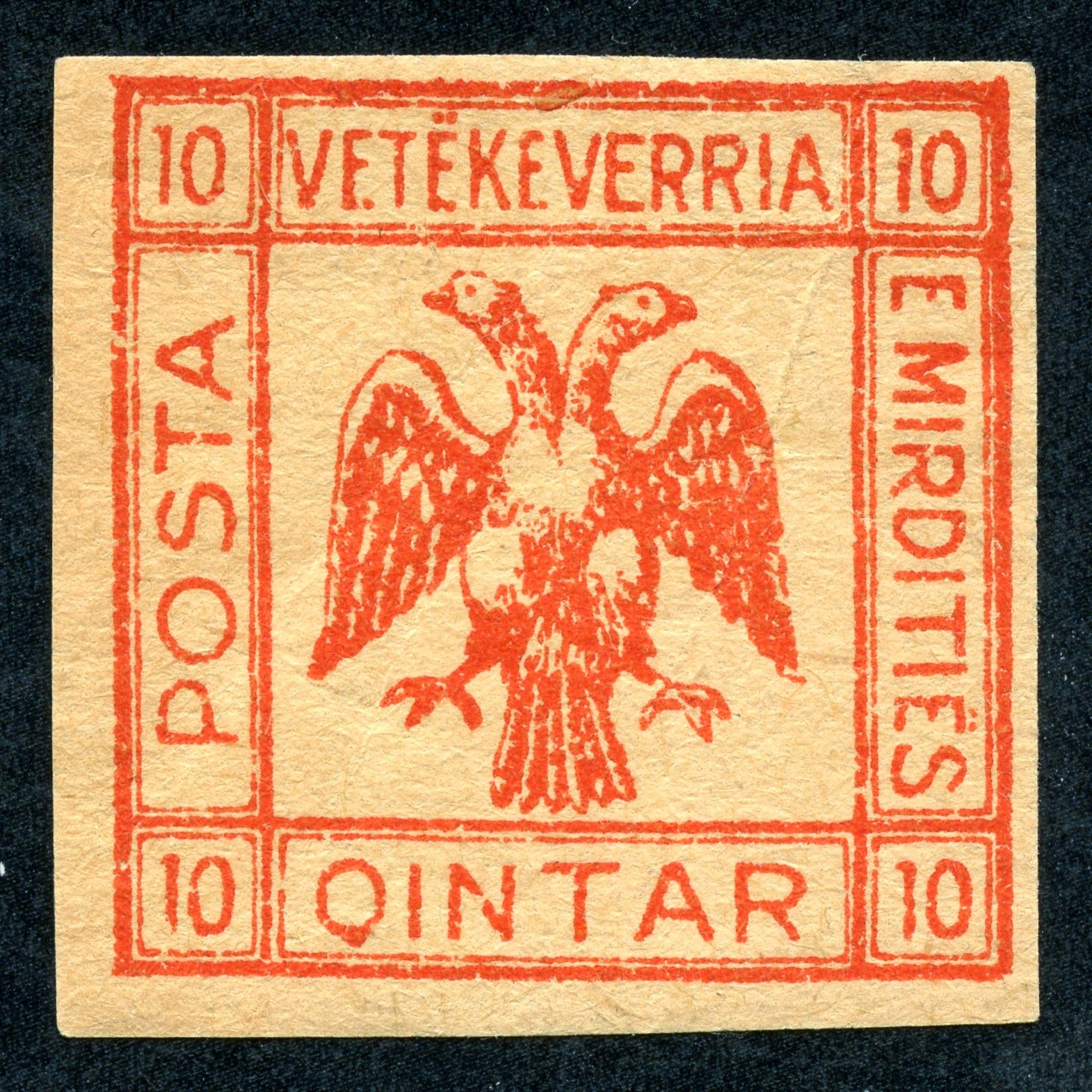 1921 Mirditi Issues 10 Quintar "Coat of Arms"
Never authorized, but in every collection
The familiar to anyone that opens an Albanian stamp collection, the 1921 "Mirditi Issues"- five regular, one surcharged "25 Qint", and five postage dues overprinted "Taske", were unauthorized, and consequently have no Scott number. 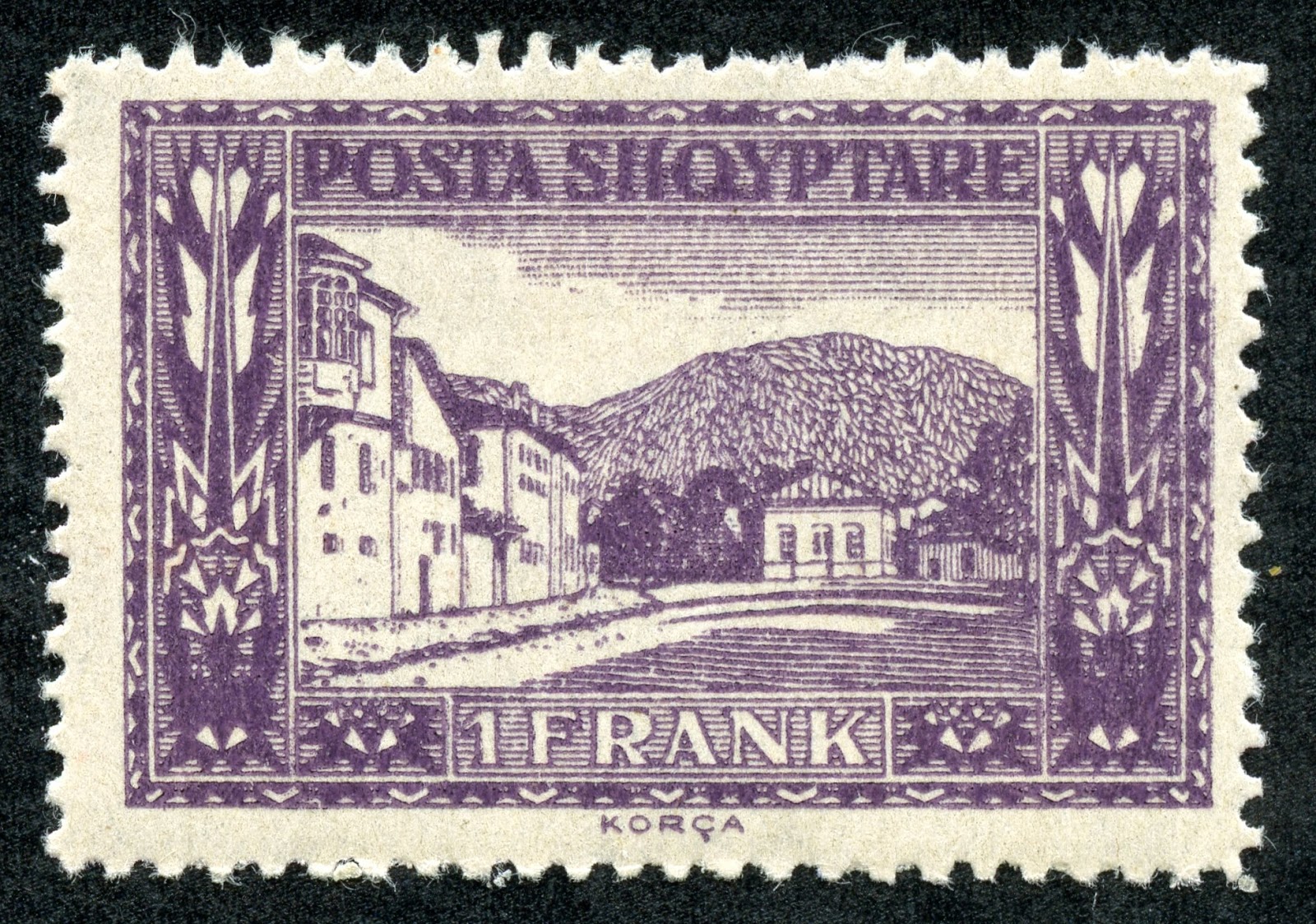 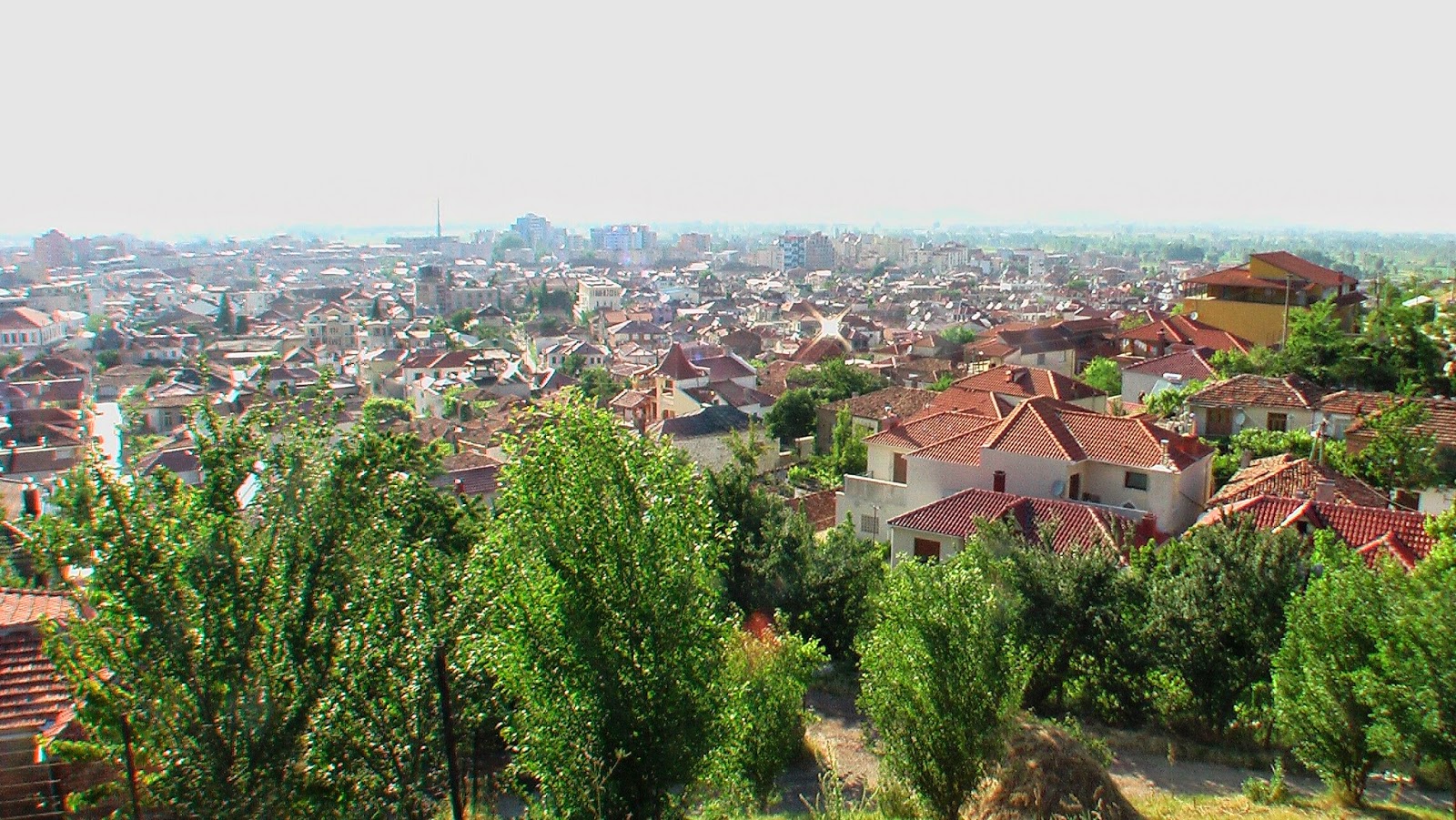 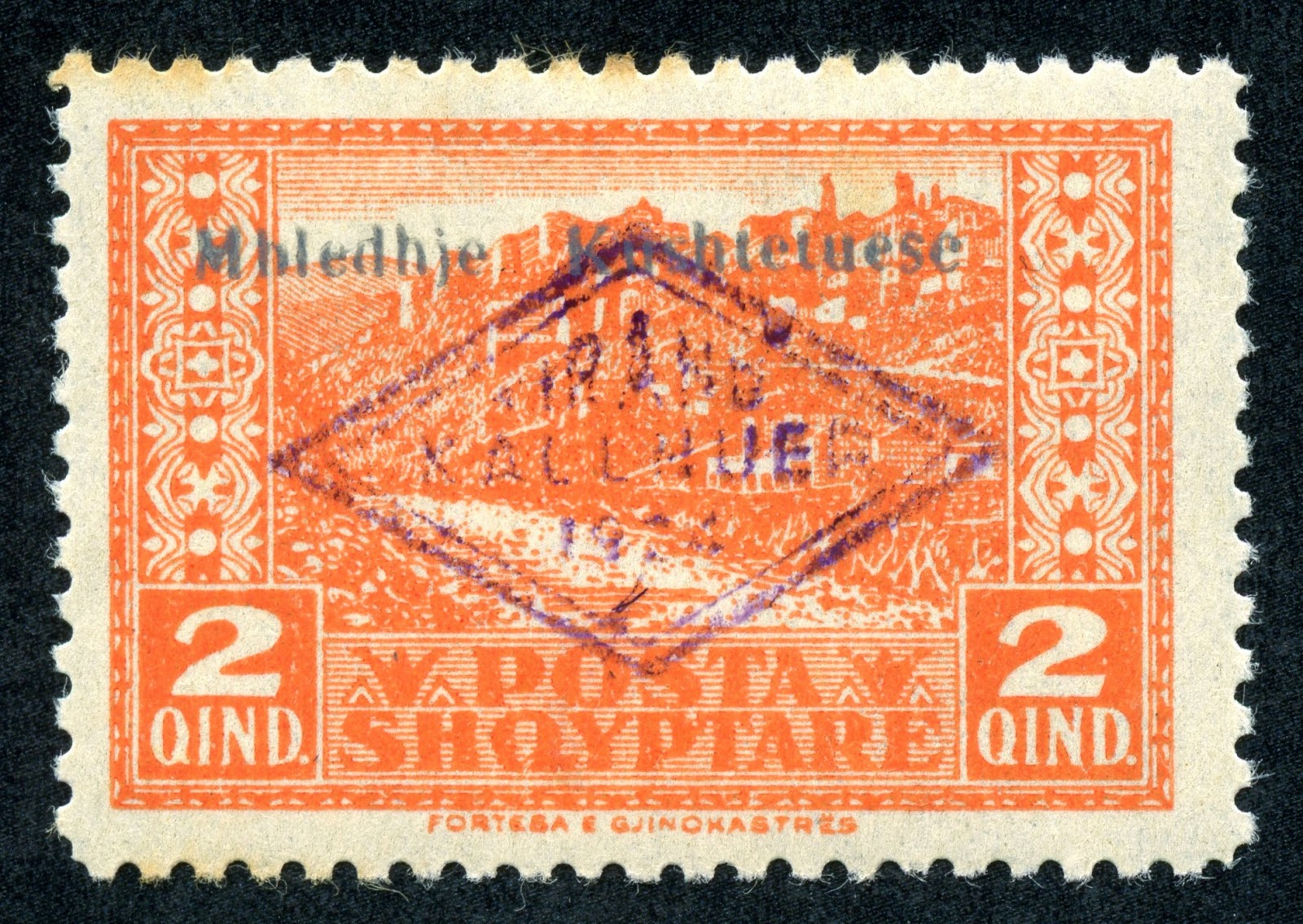 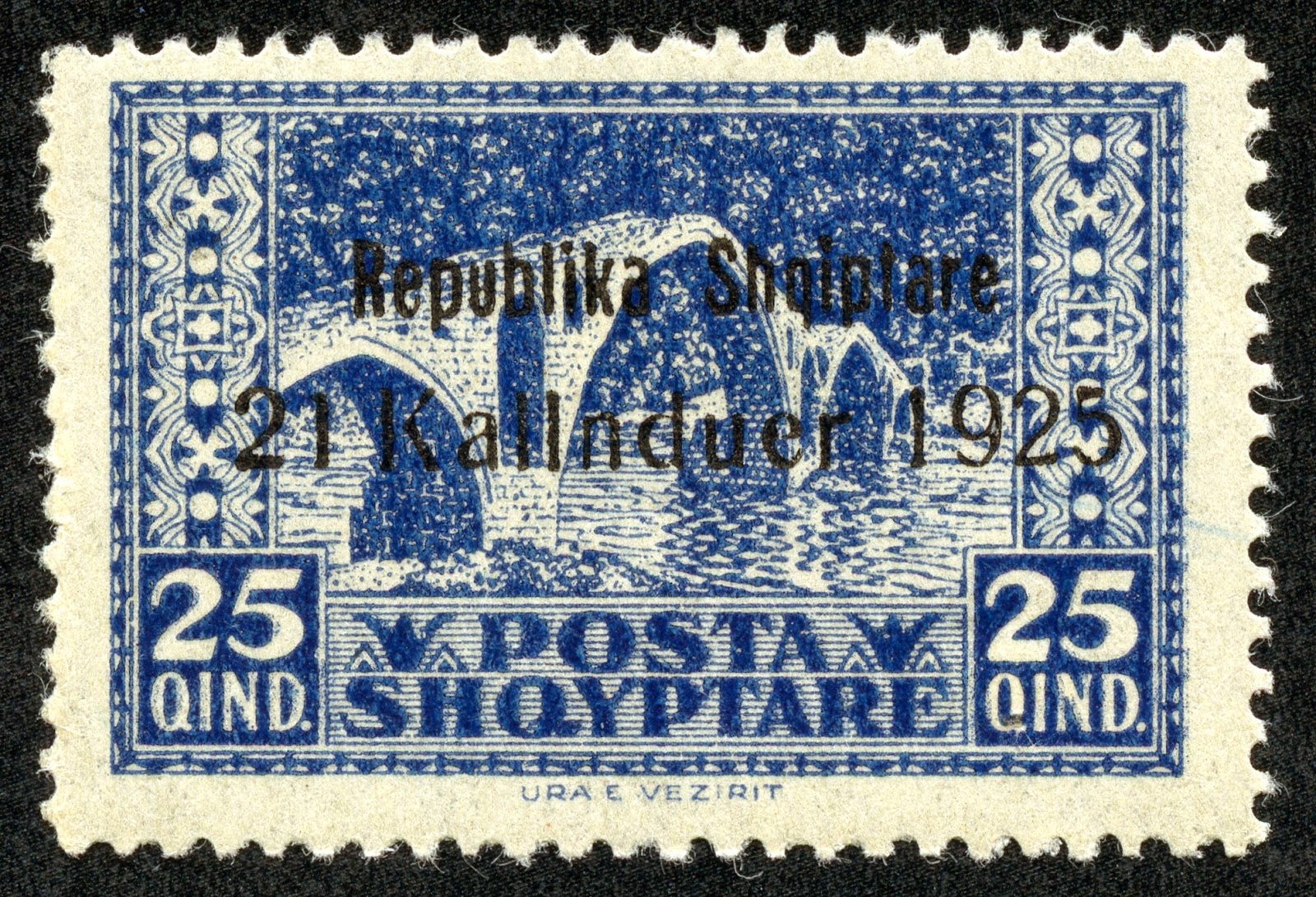 1925 Scott 175 25q dark blue "Bridge at Vezirit"
"Proclamation of the Republic"
Seven stamps were overprinted in 1925 with another change in government structure. The Vizier's Bridge crosses the Drin valley near Kukes. I suspect this wonderful old bridge is now inundated by a hydroelectric dam. 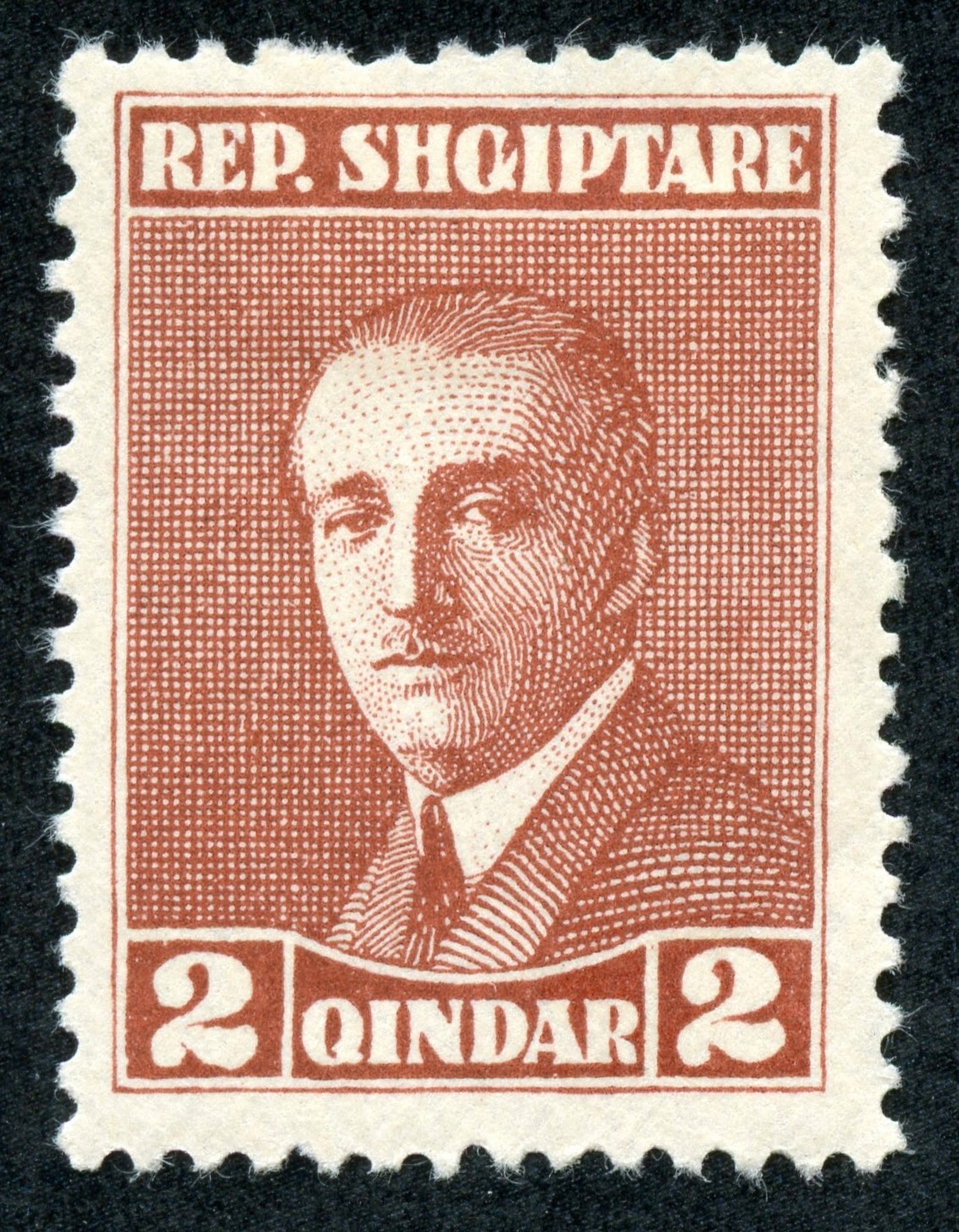 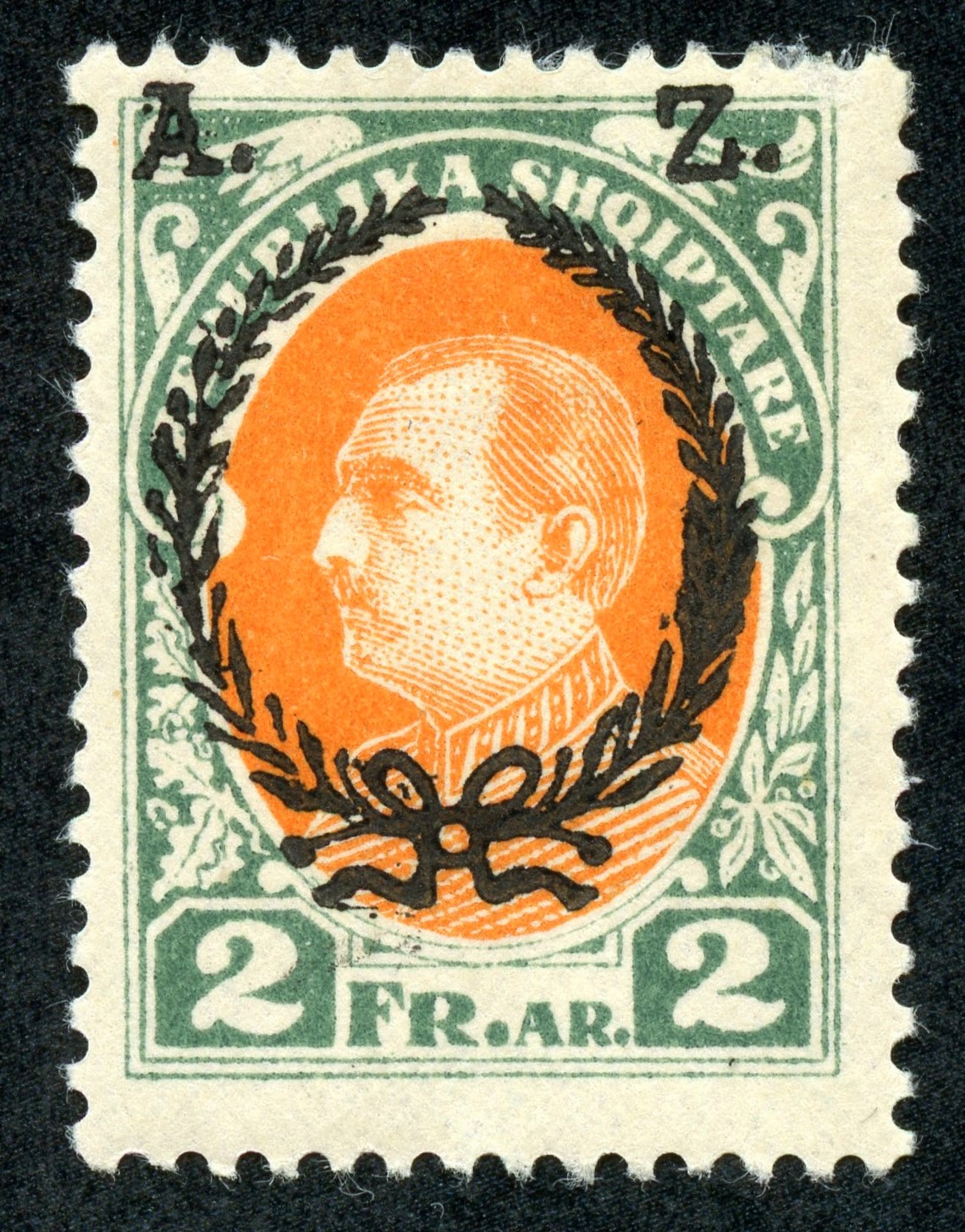 1927 Scott 205 2fr green & orange , black overprint
An eleven stamp issue was produced by overprinting in various colors the preceding 1925 issue --Unclear, the reason, but perhaps it had to do with the next event in the president's life. 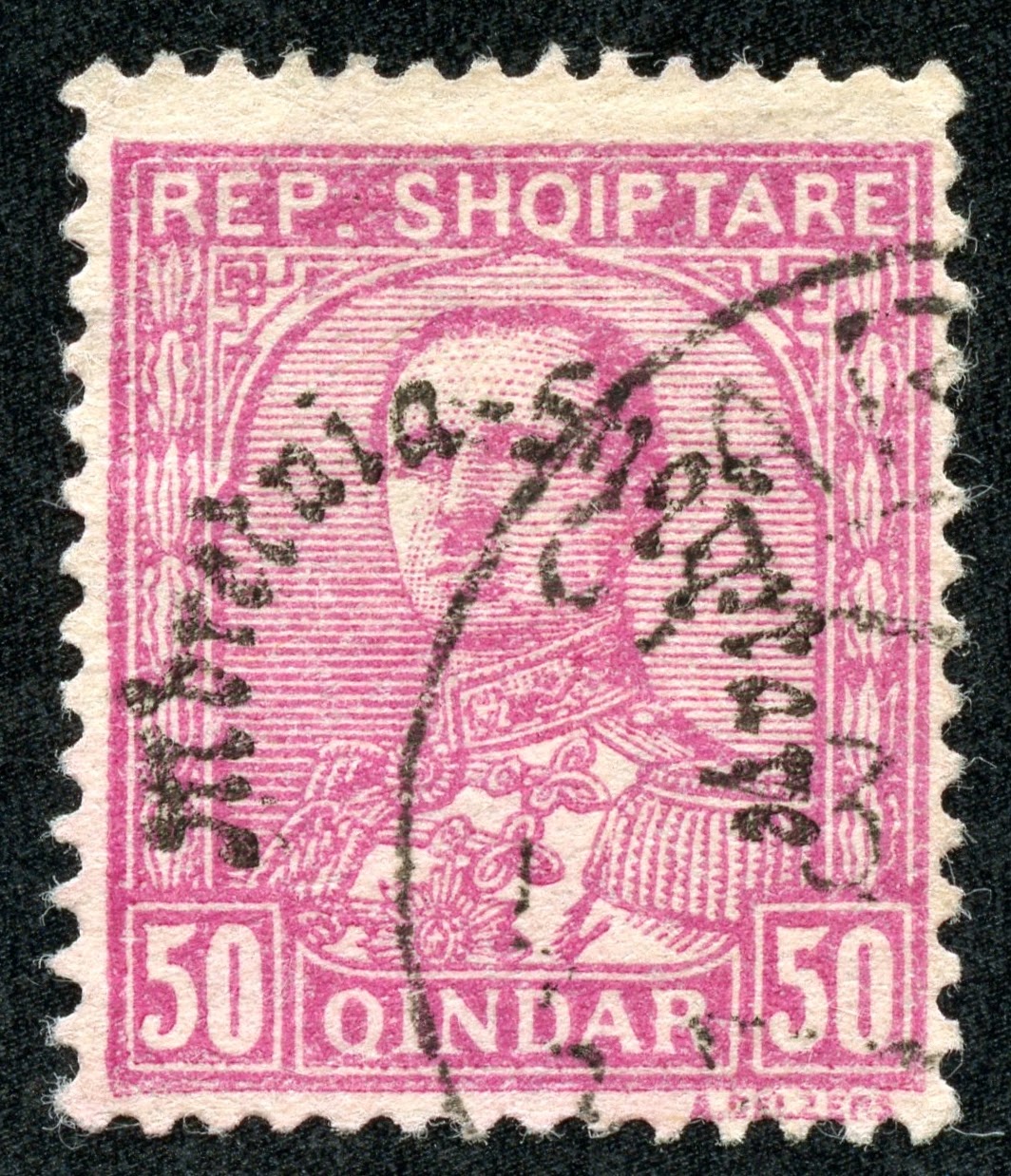 1928 Scott 233 50q lilac rose "King Zog"
"Kingdom of Albania"
Yes, the President became King in 1928 with a change to a monarchy by constitutional amendment. Wouldn't you rather be a king too? ;-) 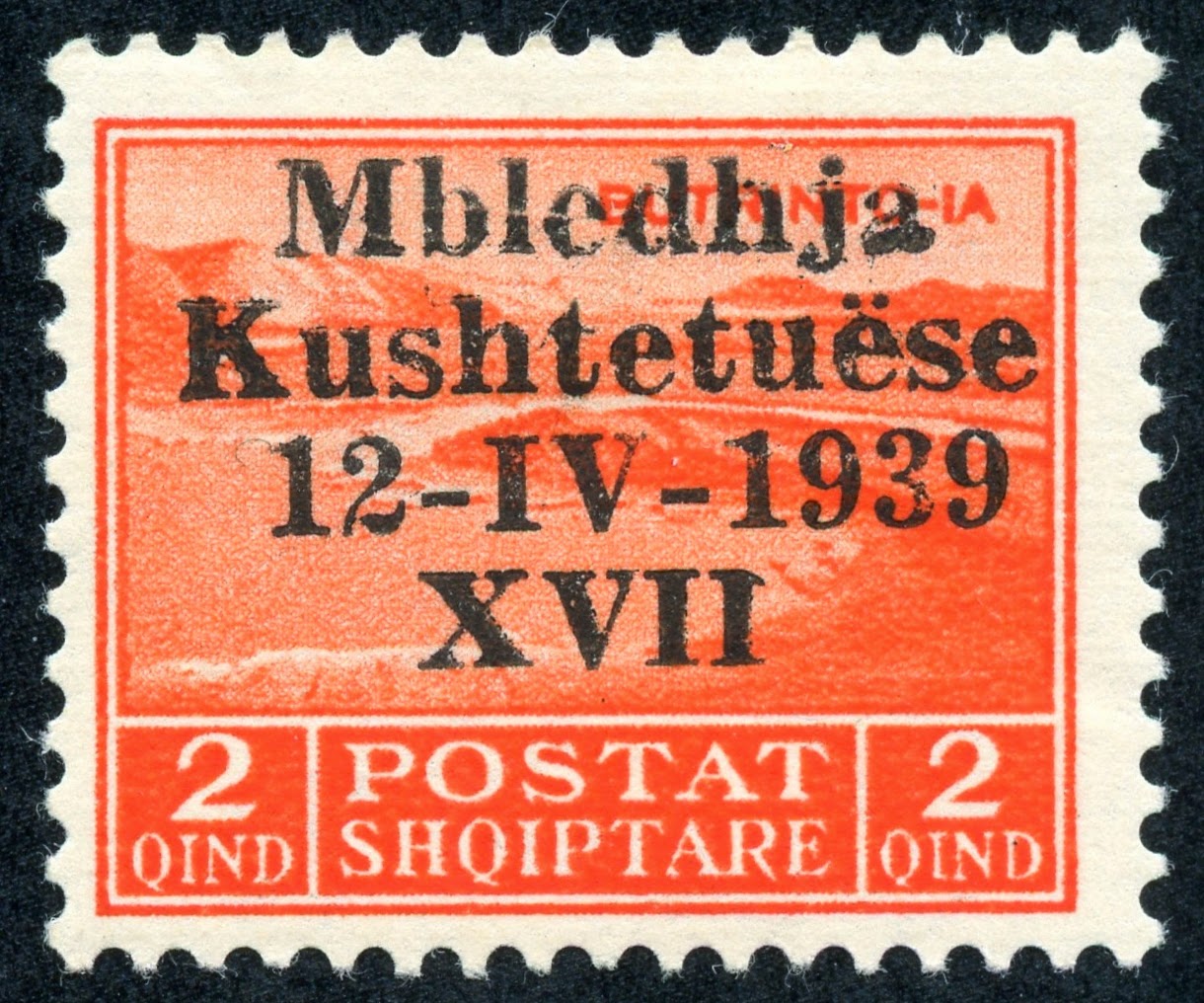 1939 Scott 300 2g orange red, overprinted
Issued under Italian Dominion
Unfortunately, the Italians spoiled the party by invading on April 7, 1939. King Zog left, but did not abdicate. The King of Italy, Victor Emmanuel III, - all 5 feet 0 inches of him - acquired the crown.

So what happened to King Zog? After WW II, he was reinstated as King- but never returned, and the country became a socialist's People's Republic in 1946.

1922 Postage Dues in Deep Blue
Deep Blue (Steiner) has 35 pages for Albania, and provides spaces for all Scott major numbers. In addition, Deep Blue has spaces for all the common -but Scott numberless- issues (1921 Mirditi stamps etc) that populate most Albanian collections- thank goodness. 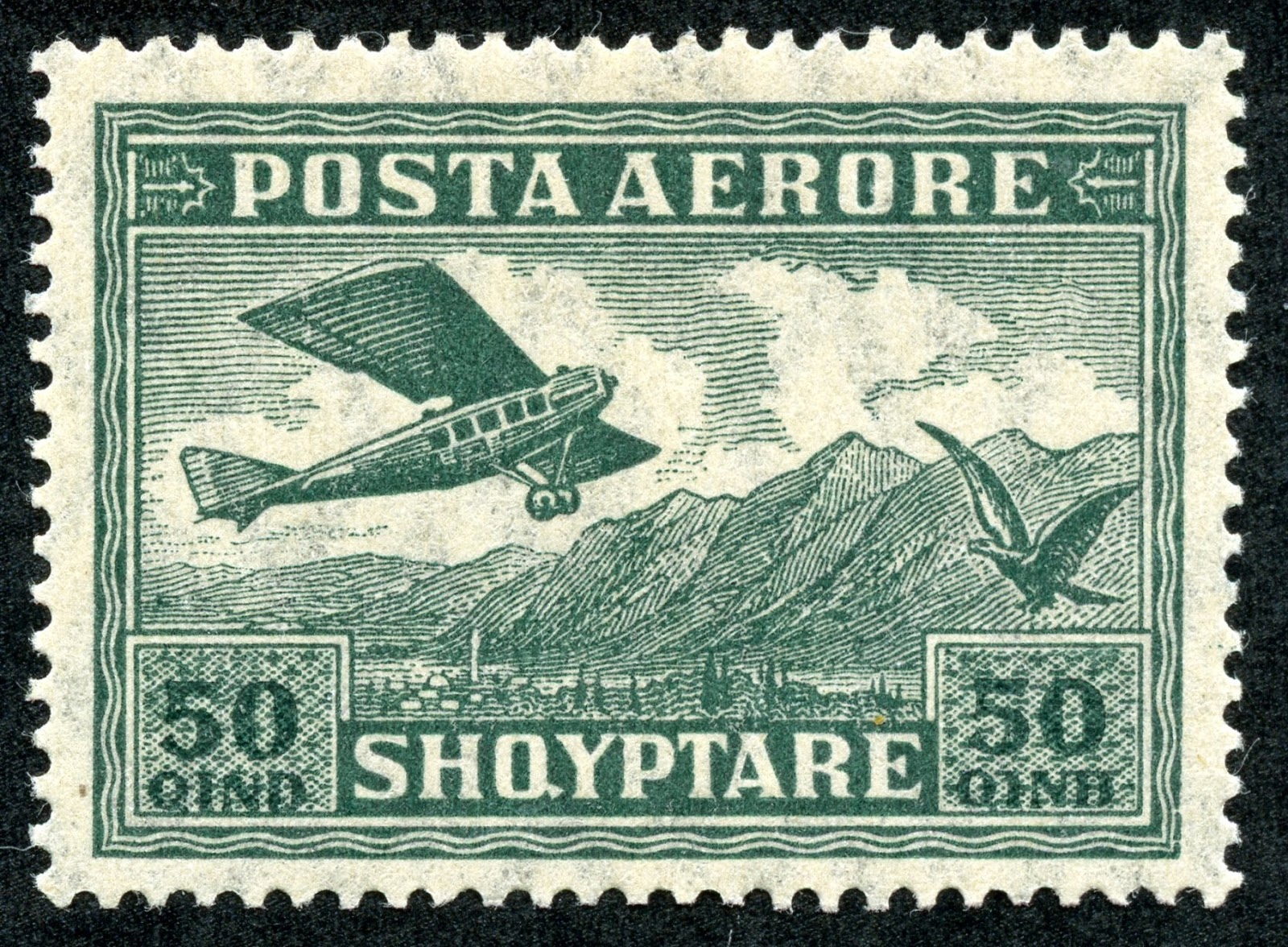 Air Post 1938 Scott C4 50q dark green
"Airplane crossing Mountains"
Out of the Blue
I am attracted to the stamps of Albania, but the counterfeits sour the enthusiasm.

Note: Pic appears to be in the public domain.

Note: This "Into the Deep Blue" blog post and stamp images have been added to the original Albania post.