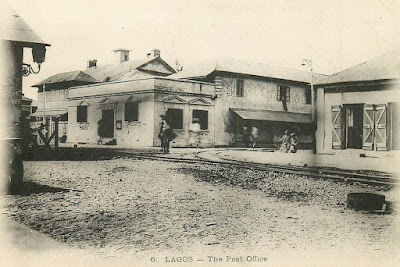 Two themes crop up repeatedly in BB. Both themes produced stamp avalanches and, no doubt, headaches for BB’s designers and editors. One is World War I and its aftermath and the other is Europe’s colonization schemes, particularly “the scramble for Africa,” as it came to be known.

Britain had long claimed and fought for territorial rights in Lagos, a group of islands narrowly separated from the African continent and home to several combative African peoples. It became a colony in 1862; the rest of modern Nigeria followed suit in 1887.

Meanwhile, German Chancellor Otto von Bismarck, who wasn’t particularly interested in Africa but didn’t want Germany to lose out in the scramble for African resources, called a conference to negotiate and settle how European nations lay claim to African territories. No native African leaders participated. At the Berlin Conference of 1884–1885 Europeans set the guidelines, then quickly seized what they could -- a colossal land-grab.

By 1900, 90 percent of Africa was a colony or protectorate of a European nation. For the most part, the boundaries set following the Berlin Conference still exist today.
Moreover, decisions made at that conference shaped Big Blue’s table of contents, although I don’t suppose Bismarck intended any philatelic fallout.

Nevertheless, the Berlin Conference’s effects on world-wide stamp collections is profound. It’s a topic I’ll return to in future posts.

Census: 14 in BB space, seven on the supplement page.

Notes
• BB provides a nice representation for Lagos.
• Despite some close calls, and  using a judicious selection for the four blank spaces, no stamps need to cross the CV $10 threshold.
• BB has the usual dilemma of one space for multiple choices. The BB checklist describes the choices. 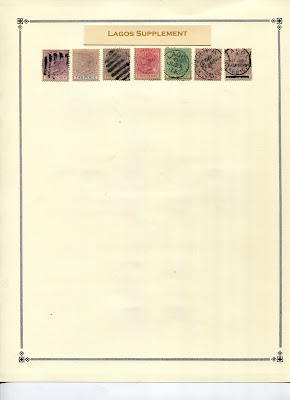