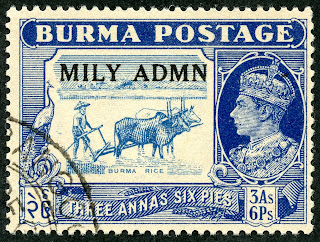 1945 Scott 44 3a6p deep blue & bright blue
"Farmer Plowing Rice Field"
"Mily Admn" overprinted in black
Into the Deep Blue
Stamps of India were used in Burma from 1854 until April 1, 1937. It then became a self governing unit of the British Commonwealth with a constitution. It became totally independent in 1948.

The original blog post and BB checklist for Burma is here. 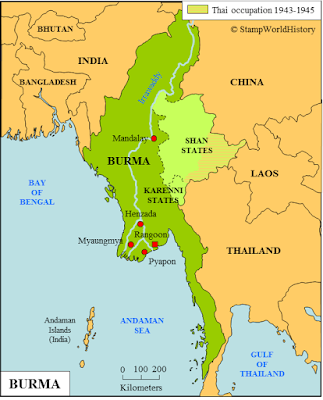 Gerben van Gelder's Map of Burma
Stamp World History Site (Presently not available)
The stamp history is interesting enough that I will split the presentation into two parts. 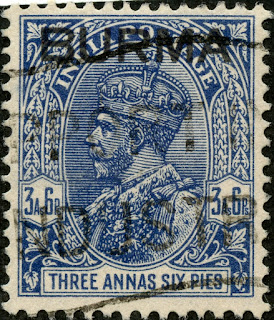 The overprint was on top of all stamps, save for the 3a carmine rose, where the overprint is on the bottom. 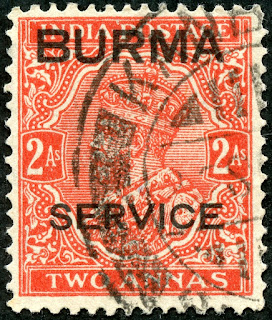 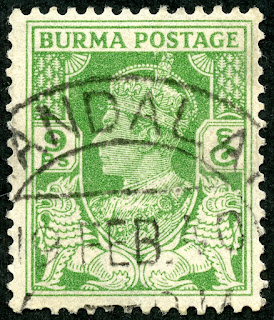 The sixteen stamp issue was lithographed by Security Printing Press, Nasik. (Be aware that the 1a brown violet was also typographed: My 1a specimen appears to typographed.)

The eight stamps that were of (mostly) lower denominations had two local motif designs in the frames.

The one as above shows "Chinthes", a lion like creature that guards pagodas and temples. 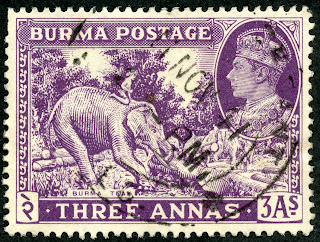 1938 Scott 26 3a dark violet
"Elephant Moving Teak Log"
The four middle denominations are pictorials, and in my opinion, the class of the lot.

Look at this image! I wish all British Commonwealth stamps were like this. 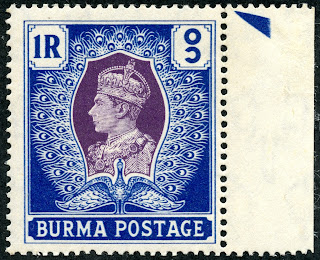 The 1r shows George VI enveloped in a peacock! 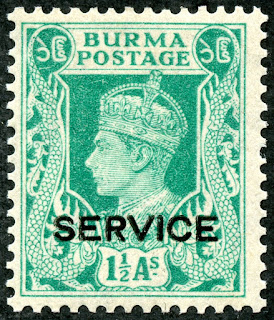 Official 1939 Scott O19 1 1/2a turquoise green
Regular Issue of 1938 overprinted in black
The Official stamps were made by taking stamps from the 1938 issue and overprinting them in black. This 1939 Official issue consists of 13 stamps.

Note the "Nagas", divine serpent beings of Buddhist mythology,  along the frame 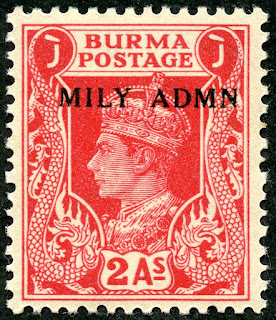 The British Military began plans for liberation in 1943, with operations against the Japanese increasing toward the latter half of 1944.

Postal services for the civilian population started in April, 1945, with Mandalay (June 8) and Rangoon (June 16) opening on the dates noted.

The British Military Administration continued through the end of 1945. The stamp issues of 1938-40  (16 stamps) were overprinted in black "Mily Admn", and released in 1945. 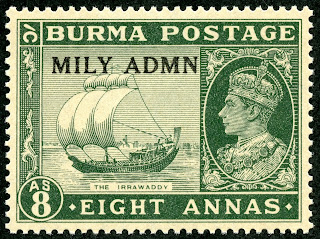 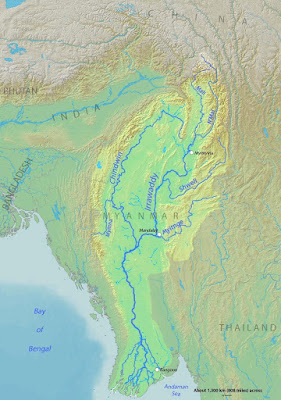 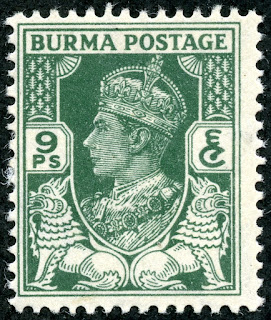 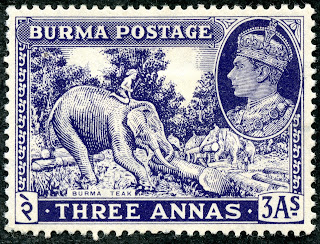 Note the fabulous blue violet color on this three annas! Normally, I'm not much of a fan of lithography during the classical era compared to engraving (tends to lack detail,  have a dull washed out look, and subject to easy forging), but this design/execution/printing is great! 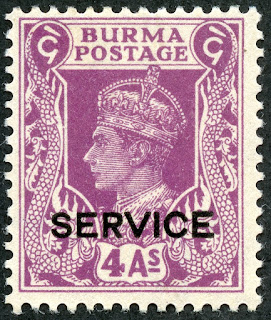 A thirteen stamp Official issue was released in 1946. 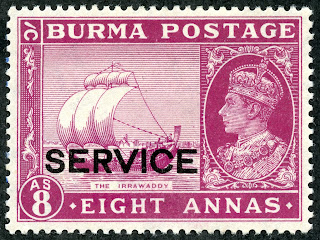 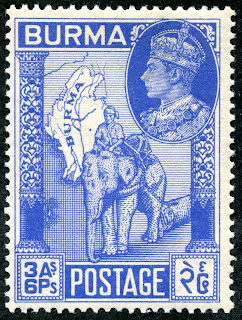 1946 Scott 69 3a6p ultramarine
"Elephant Hauling Teak"
Victory of Allied Nations in WWII
On May 2, 1946, a four stamp issue was published celebrating the victory of the Allies.

This would prove to be the last issue for the British administration. 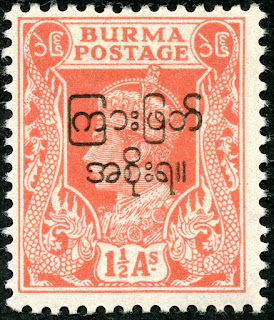 The overprint was applied to the 1936 regular issue. 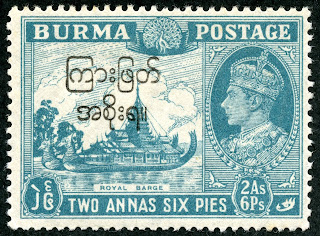 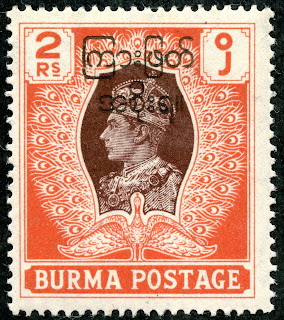 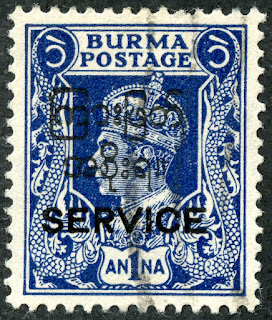 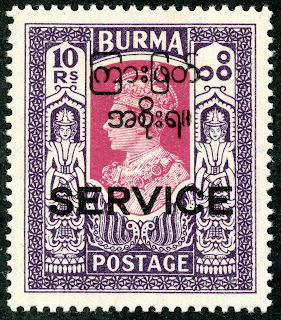 Note the "Nats" (Spirits), which are worshiped as part of Buddhism, depicted along the stamp frame here. Nats consist of 37 Great Nats (human beings who met violet death ("green death"), and the rest (spirit of trees, water etc). 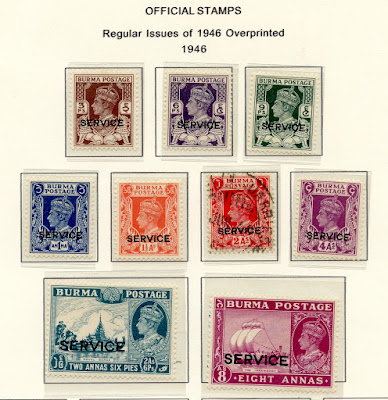 Burma 1946 Official Issue
Regular Issue of 1946 Overprinted
Deep Blue (Steiner)  has nine pages for the 1937-47 stamps issued by the British administration. All of the Scott major numbers have a space. 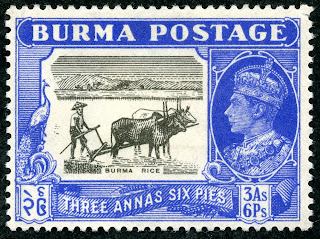 1946 Scott 59 3a6p ultramarine & gray black
"Farmer Plowing Rice Field"
Types of 1938
Out of the Blue
Burma (and Myanmar) are fascinating countries made more so by their self imposed isolation. The stamps likewise.

Note: "Irrawaddy" Map appears to be in the public domain.
Burma Map - Stamp World History: Through prior correspondence, I had obtained general permission from Gerben to use his maps.