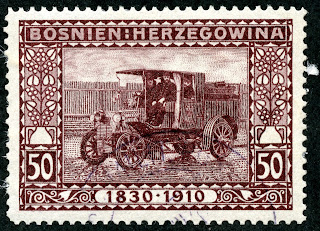 1910 Scott 58 50h dull violet "Postal Car"
Birthday Jubilee Issue Emperor Franz Josef
Into the Deep Blue
Austrian designed Bosnia & Herzegovina stamps are delightful, even if the pictorials are a little heavy on the arabesque frames. This is a continuation (Part B) of a review of B&H stamps during the classical era (1879-1918) until its absorption into Yugoslavia. 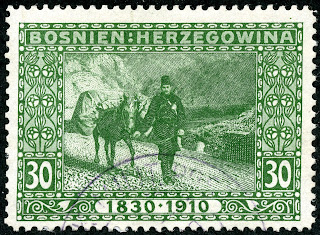 Since the 1906 issue was a highlight for B&H issues, a repeat is certainly not minded. ;-) 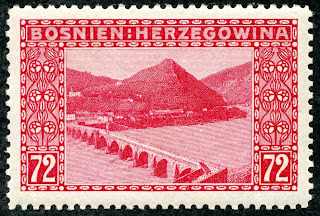 Vishegrad is in the eastern part of the country at the confluence of the Drina and Rzav river. 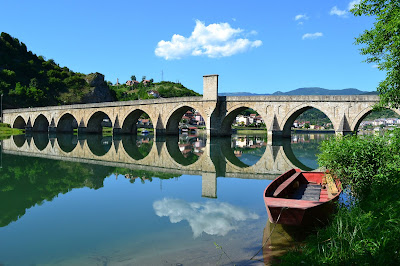 Mehmed Pasa Sokolovic Bridge on the River Drina
The bridge,  built between 1571 and 1577, fortunately still exists, unlike the historic bridge at Mostar, which was destroyed in 1993 during the civil war. (See the "Out of the Blue" section header with the 1910 20h dark brown stamp depicting the "Old Bridge Mostar".) 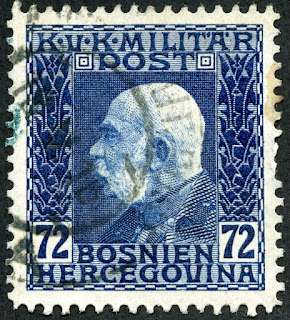 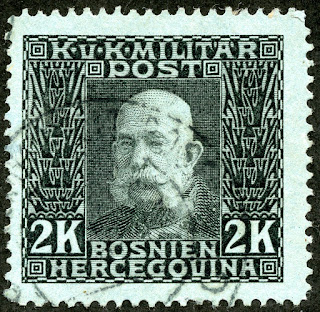 1912-14 Scott 82 2k dark gray/blue
"Emperor Franz Josef"
The higher denominations are on colored paper, and in larger format. The 2k and the 10k stamps have this design. 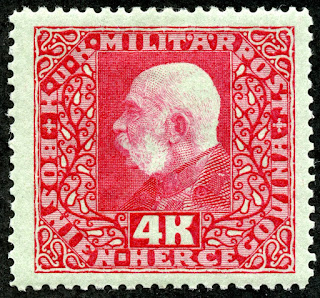 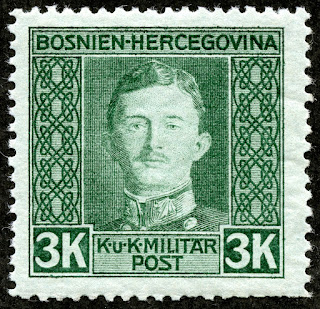 1917 Scott 120 3k green/blue
"Emperor Karl I"
Franz Josef was succeeded by his grandnephew Charles I. That state of affairs did not last long. With the defeat of the Empire on November 11, 1918, Charles I proved to be the last reigning monarch of the Austro-Hungarian Empire.

An eighteen stamp engraved set was released in 1917 depicting the new emperor.

I should mention there is also a fourteen stamp set showing Charles I, but never released in B&H because of the defeat of the Empire. However, the stamps were available for a few days at the Vienna Post Office after the Armistice in 1918. They are listed in the catalogue only as unused, and most at CV $10+. (I don't have any.) 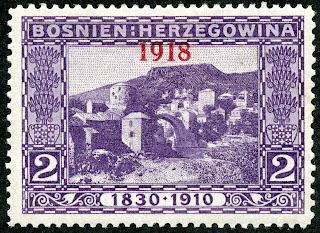 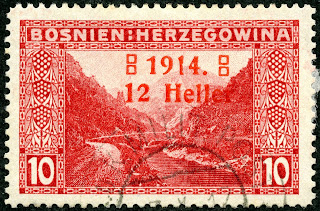 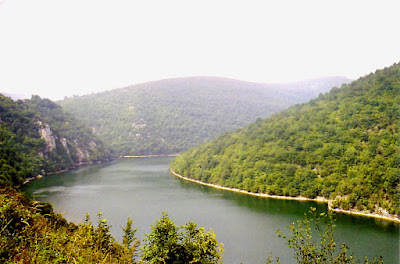 Vrbus River and Valley
The 146 mile long (235 km) Vrbus river is located in western Bosnia & Herzegovina, and is a right tributary of the Sava river. This is a scene near Banja Luka, the major city on the Vrbus.

This is a close-up of Type I. 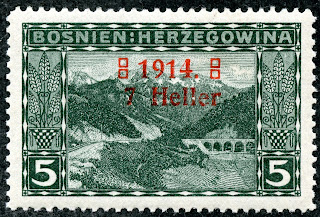 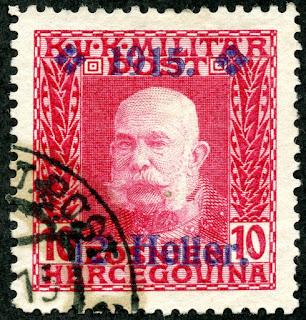 But there is an interesting complication: the overprint is found in four types, depending on the length of the surcharge lines. 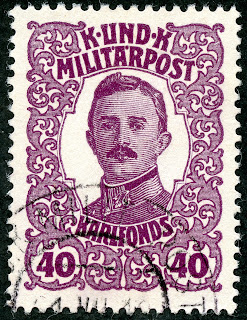 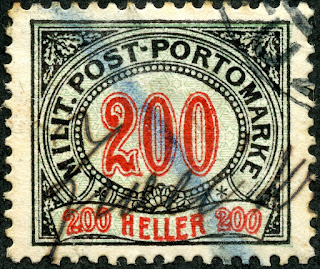 1904 Postage Due Scott J13 200h black, red & green
In 1904, a thirteen stamp postage due issue was printed for B&H. Major numbers in Scott have perf 12/1/2, but there are also seven more groupings (minor numbers) with various perfs in the catalogue. 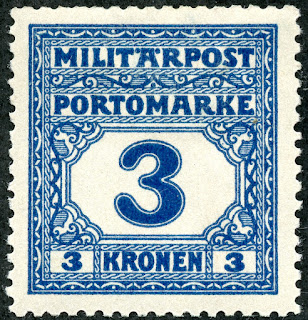 1916-18 Scott J26 3k dark blue
Between 1916-18, a new postage due set was released, consisting of thirteen stamps. Most of the stamps are red, but the higher values (illustrated here) are in blue. 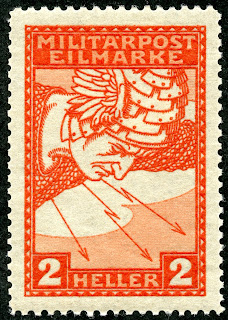 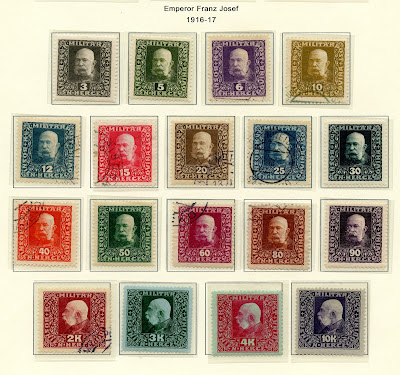 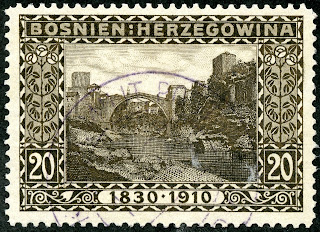 Regretfully, I didn't say much about the accompanying history. For a historical  review of the occupation by the Austro Hungarian Empire during 1898-1908, check out the Dead Countries Stamps entry. Thanks Michael!

Note: pics of the bridge at Vishegrad, and the Vrbus river appears to be in the public domain.