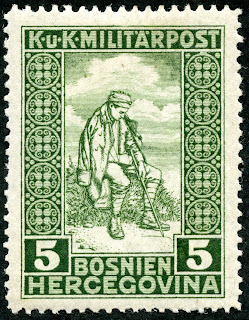 1916 Scott B9 5h (+2h) green
"Wounded Soldier"
Into the Deep Blue
Bosnia & Herzegovina, first occupied (1879-1908), then absorbed as provinces of Austria-Hungary (1908-1918), was at the epicenter of the onset of WW I with the assassination of Archduke Franz Ferdinand of Austria at Sarajevo. 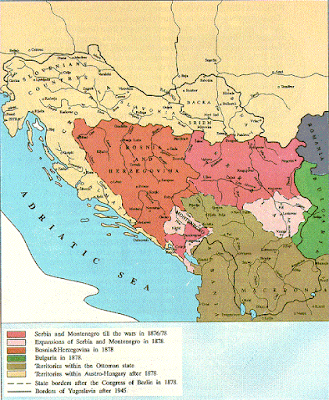 Bosnia & Herzegovina 1878
For more on the history, and the BB checklist, go to the original blog post.

For a nice overall map of the Austro- Hungarian Empire up to 1918, check out  Stamp World History.

This blog post (and the next) will take a closer look at the 1879-1918 stamp issues of Bosnia & Herzegovina, all bearing a close design relationship with those of Austria-Hungary. 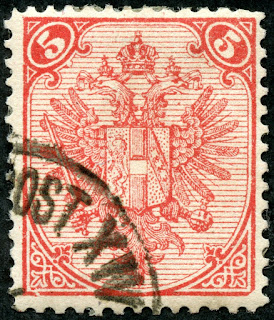 Note the stamp has no country text identification.

It was printed both lithographed and typographed.

It can be found with Type I, Type II, & Type III design variations.

Surprisingly, the Scott Austria Specialty album only has one denomination space for the 1879-1898 B&H issue.. No breakdown by types. Terrible!

Fortunately, Deep Blue (Steiner) provides spaces for the types for this issue. 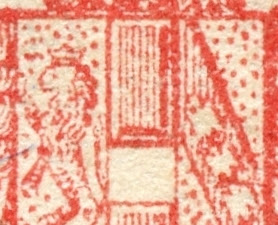 Type I Close-up
The three heraldic eaglets on the right escutcheon are blank
The eye of the lion is indicated by a very small dot (or no dot at all)
For the WW collector, a 10x loupe examination should be sufficient to differentiate types.

Note, for the nine stamp lithographic 1879-1894 issue, the center shield area of the "Coat of Arms" holds the clues for type I stamps. The three "eaglets" along the right side of the shield are blank inside. And the "eye" of the lion is marked by a small dot (or no dot at all).

Admittedly, there seems to not be a lot of good information (in English) on this issue. I noted, while checking the 'Bay, that there were multiple examples of type II stamps being sold as type I. 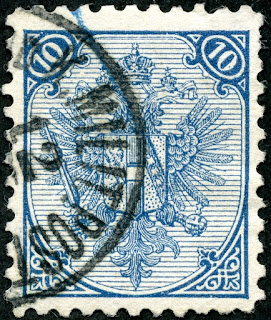 Note one can get a clue that the above stamp was typographed, as the corners of the frame show a squeezing out of the ink. 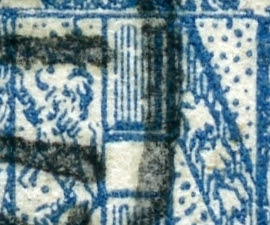 Type II close-up
The three heraldic eaglets on the right escutcheon show a colored line
across the lowest eaglet, and sometimes on the middle eaglet
The eye of the lion is represented by a large dot that touches the head outline above it
Type IIs, when one knows what to look for, are fairly easy to determine.

The "eaglets" show a colored line in the lowest eaglet, and sometimes in the middle eaglet.

The "eye" of the lion is represented by a large dot, which touches the head outline above it. 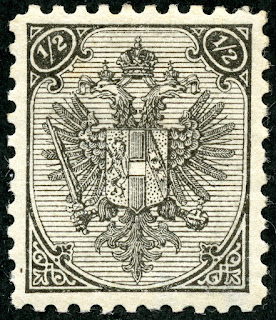 Note here in the above example that the corner frames are squeezed out - probably typographed. 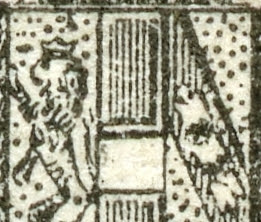 Type II close-up
The three heraldic eaglets on the right escutcheon show a colored line
across the lowest eaglet, and sometimes on the middle eaglet
The eye of the lion is represented by a large dot that touches the head outline above it
Note this stamp has the markings of a Type II: a line noted in the lower eaglet, and a large dot attached to the upper head outline for the "eye" of the lion.

1/2 Novcica
There is a black dot on either side between the curved ends of the
ornaments near the lower spandrels
Sub-type H: The dots stand clear of the curved lines - specifically the right dot, and
stamps of this (2nd) printing are typographed
But fortunately, there is an additional sign to determine if the 1/2n black is a member of the 1879-94 lithographed issue (has the "G" sign), or a member of the 1894-98 typographed issue (has the "H" sign).

The "H" sign (illustrated here) has the right dot standing clear of the curved lines.

In contrast, for the "G" sign, the right dot would be attached to the curved line above. 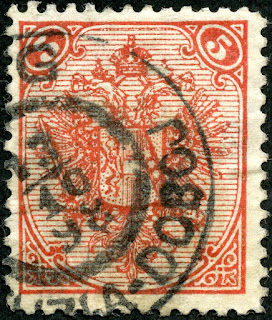 1898 Scott 6b 5n rose red Type III; Perf 12 3/4
The eaglets and the eye of the lion are similar to Type I
The large eagle's feathers have two lines of shading
There is also a Type III, found only for the 5n rose red, and issued  in 1898.

Note this example has an 1898 cancel.

The large eagles's feathers also look different: cruder, with little cross hatching in the feathers ( compare with other examples shown for this blog post).

I believe this is a probable Type III, although, with the very crude large eagle feathers, I did entertain the notion if this stamp could be a forgery.

Type III is also supposed to have the same characteristics as Type I in the shield, and this stamp appears to have that. 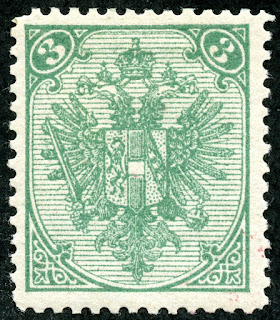 The reprints are quite ubiquitous in feeder albums (CV for the nine stamp set: $30+).

They are on very white paper.

They were printed in lighter colors. 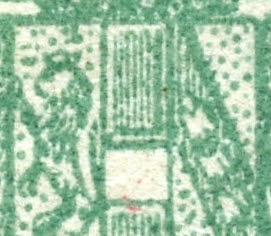 Reprint has Type II characteristics
And the reprints always have characteristics of Type II: a colored line within the lowest eaglet and sometimes the middle eaglet, and a large dot for the "eye" of the lion. 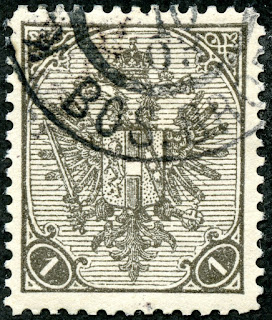 1900 Scott 11 1h gray black, Perf 12 1/2
New design; New denominations; Typographed
In 1900, there was a change in denomination to Heller/Krone, and consequently, a new "Coat of Arms" fourteen stamp issue was released, eleven which had the above design.

This issue wasn't as complicated as the preceding issue (no "types"), but can be found with Perf 10 1/2, 12 1/2, and compound. It also exists with ribbed paper. 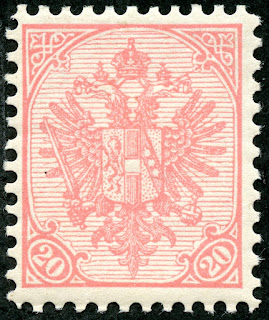 The reprints have a CV of $5, which is less than the original stamps (CV $10+). For myself, I only have reprints of these stamps. 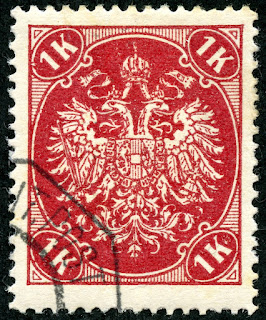 1900 Scott 22 1k dark rose "Coat of Arms'
The three higher denominations for the 1900 issue are in a larger format with the illustrated design. 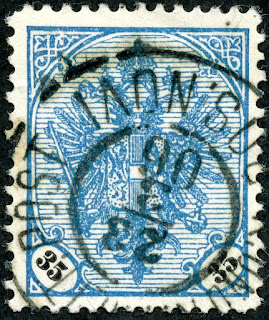 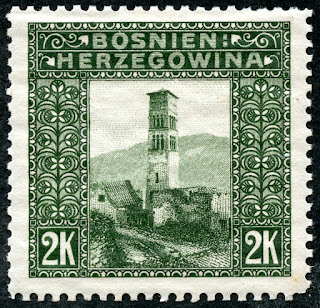 On November 1, 1906, an iconic (with collectors) sixteen stamp engraved pictorial set was released.

The entire 1906 pictorial set is shown below under the "Deep Blue" section.

In Scott, the Perf 12 1/2 stamps are given major numbers. 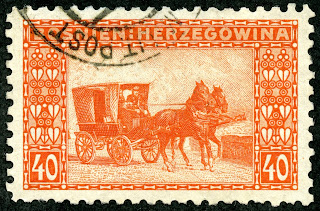 1906 Scott 40a 40h orange red "Mail Wagon"
Perf 9 1/4
The 1906 issue is famous (infamous?) for the variety of perfs one can find. As I mentioned earlier, many of these perf combinations were apparently "philatelically inspired".

Scott lists twelve (minor number) groupings in their catalogue with a certain defined perforation. All are given a CV (often high), so obviously there is demand. In total, there are some 178 minor numbers listed.

Although, I'm not into actively collecting perf variations for this issue, I do have a quadrilled page with various perf examples harvested from feeder albums. 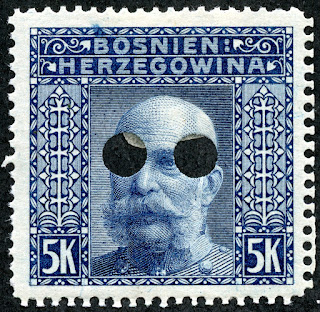 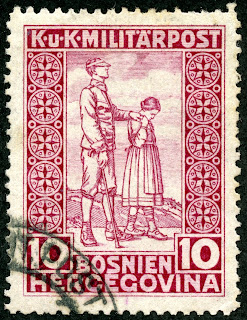 1916 Scott B10 2h (+2h) magenta
"Blind Soldier"
Turning to some interesting semi-postals, there was a two stamp set issued on March 1, 1916 showing a blind soldier (illustrated above), and a wounded soldier (see the "Out of the Blue" header for the 1918 issue version).

If one ponders the scene, and the implications for that soldier (and his family), it is a profoundly moving and sobering reality depicted on the stamp 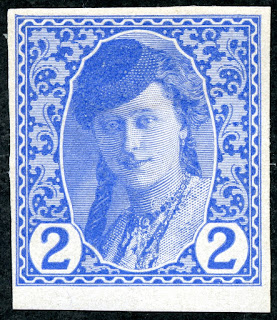 But many of us may not see this detailed portrait. Why? 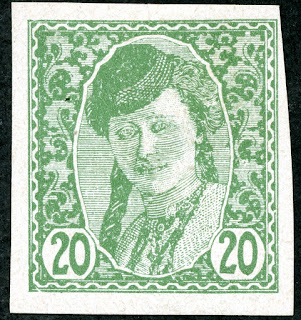 "1913 Scott P4 20h green"
Lithographed Forgery
Because of the very common forgeries found for this issue! Apparently made for the packet trade in Italy, Varro Tyler estimates that the forgeries outnumber genuine stamps in collections by about 5:1.

Note the overall blurry appearance. There is also a horizontal line found jutting out into the thin white space surrounding the portrait across from the left "20" numeral: characteristic for the forgery. 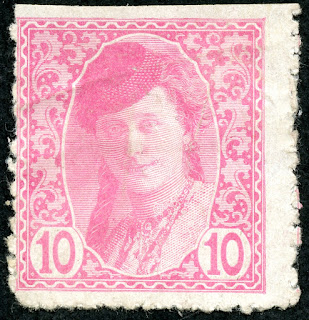 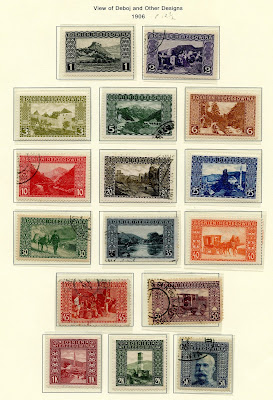 1906 Issue in Deep Blue
Deep Blue (Steiner) has fourteen pages for the 1879-1918 stamps of Bosnia & Herzegovina. All of the major Scott numbers have a space. In addition, the Steiner provides spaces for the Type I (major number), & Type II - Type III (minor number) stamps for the 1879-1898 "Coat of Arms" issue. 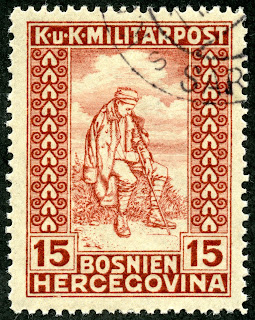 There is more to come on B&H stamps in the next post. !!