French Congo further illustrates the point about the progression in colonial stamps from mother country stamps to those of an independent nation (see comment on French Colonies). French Congo early “local color” issues sport a tarzanic aesthetic, although I don’t know if Viscount Greystoke’s legend crossed the English Chanel, much less if they inspired the crouching leopard, coconut grove, or topless Pygmy woman. Maybe so, probably not -- although the stamps are sufficiently garish to suggest so.

Oops. I just read that the first Tarzan book came out in 1912, so maybe the stamps inspired the author

Jim's Observations
The "Leopard" pictorial is a refreshing contrast to the "Monarch" British Colonies stamps of the same era. And the lithe Leopard appears capable of leaping out of the stamp! 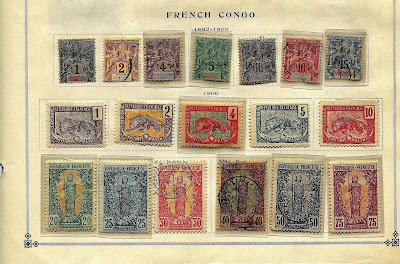 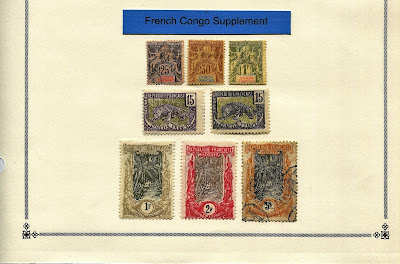