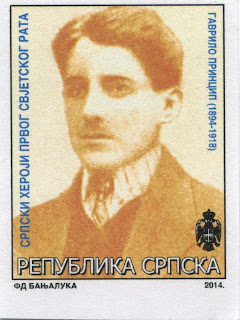 Sometimes the pretty scraps we collect hide dark realities. So it is with stamps of Bosnia-Herzegovina. On the surface, their patriotic symbols, kind-looking dignitaries, and bucolic scenery suggest a happy, well-ordered country.

The cancellations tell another story. Most are military. The turmoil brewing when these stamps were in use stemmed specifically from Serbian hatred of the Austro-Hungarian Empire’s domination, but more generally from centuries of ethnic discord. It came to a head, of course, when a young Bosnian Serb -- Gavrilo Princip -- shot and killed the heir to the Empire’s throne, Franz Ferdinand, and his wife Sophie (posthumously commemorated, B14-15, page 3). The Empire was outraged, cool heads went out of fashion, alliances kicked in, World War I ensued and, as one result, the Empire was crushed.

After the War, remaining Bosnia-Herzegovina stamps were disfigured and sold to collectors as a sign of the Empire’s good riddance, according to the paper that came with my set (see bottom of last supplement page). Similarly, plans for the Archduke Franz Ferdinand Memorial Church (B13, page 3) were scrapped.

The philatelic upshot of Princip’s heroism (or villainy) is tremendous. BB overflows with stamps generated by WWI and its aftereffects, including those of entirely new nations -- Yugoslavia, Saar, among others. Stamps of former German colonies take on French or British appearances. Czechoslovakia and Poland begin issuing. Plebiscite and League of Nations mandate stamps proliferate. Two bullets -- millions of stamps, perhaps billions, to fill BBs.

Bosnia’s continuing trauma is captured by the art of Safet Zec and also, if you can stomach it, of Peter Howson. They paint the 1990’s Bosnian war, not 1914. Page 1 has a 1911 cancel from Rogatica, Zec’s sad hometown.

Bosnia and Herzegovina stamp issues from 1879-1918 are represented in Big Blue on 7 pages(1997) or 5 pages(1969) with 152 stamp spaces for regular,semi-postal, postage due, newspaper, and special delivery categories. The 2011 Scott Classic Specialized catalogue has descriptions for 193 major varieties. Coverage by Big Blue is 79%.
Nice coverage by Big Blue, including all (20) of the semi-postals, and essentially all (25) of the major number postage dues.

Page 1 (Note: Click on page to enlarge for close examination.) 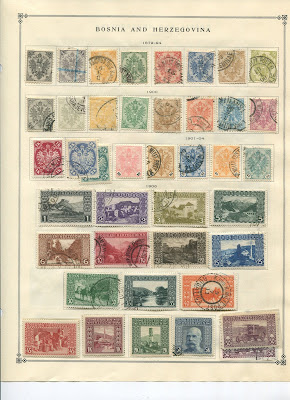 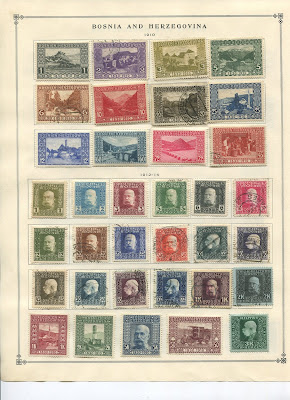 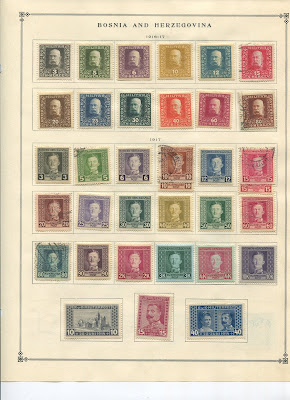 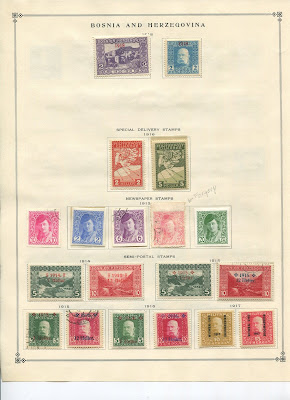 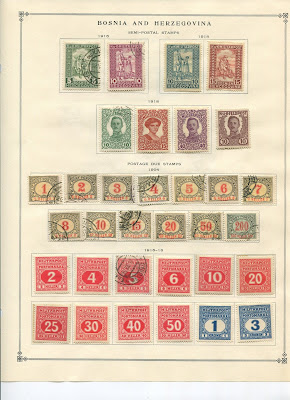 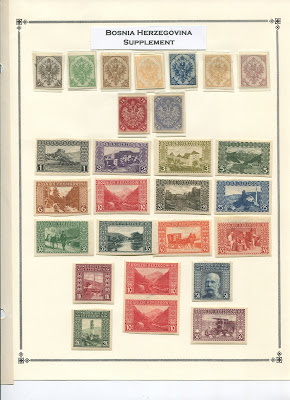 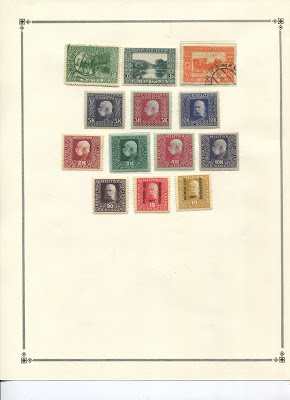 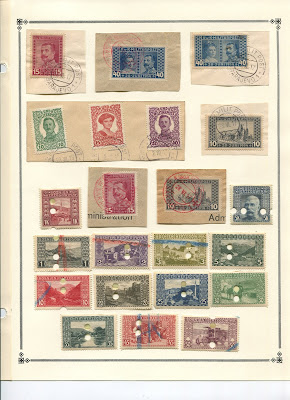