Complicated? Ten Hints to Help!
Into the Deep Blue
The Ottoman  stamp era is quite attractive to many WW collectors, but talk about all the confusing surcharged/overprinted stamps!

From 1865-1917, I count 656 overprinted/surcharged stamps! And Scott does little in the catalogue with few additional illustrations to make it more lucid.

And reviewing Turkish holdings in feeder albums- as well as my own! - shows rampant mistakes in stamp space placement.

And, of course, most WW collectors do not understand Turkish with the Arabic script.

All of this can be discouraging.

I can't guarantee all the Turkish stamp placement conundrums will be solved, but here are ten helpful (and basic!) hints.... 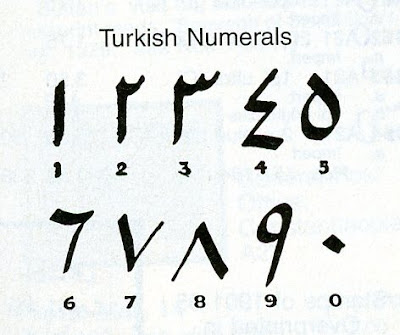 Life will be much easier for the WW collector of Turkish stamps if the collector becomes familiar with the numbering system. Be aware that  the "0" (dot) is often placed after another number, -say the 5, which will then make the number "50". 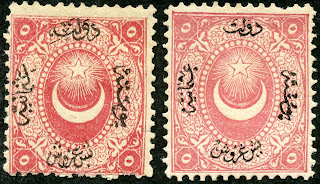 Crescent and Star Surcharged
1865 Scott 12 5pi carmine & 1867 Scott 18 5pi rose
The earlier 1865-1876 regular and postage due issues show the Crescent and Star, symbols of the Turkish caliphate. Almost all of the stamps are overprinted/surcharged. The characters at the top and sides translates roughly to "Ottoman Empire Posts" The bottom character denotes the surcharged denomination. The issues (1865,1867,1869,1874-75,1876) all have (sometimes slightly) different overprint characters. Note the (top and sides) character differences between the 1865 and 1867 issue stamps? (The bottom character will change with denominations.) One doesn't need to read Turkish Arabic script, just pay attention, and match the script to the correct issue. 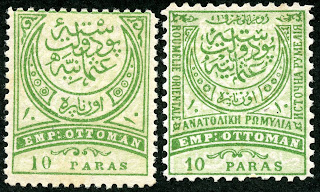 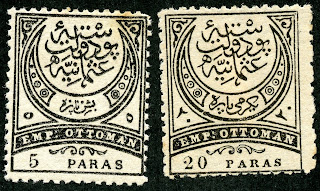 Seal of the Ottoman Empire
Regular Issue...or Postage Due?
1886 Scott 74 5pa black & pale gray
1888 Scott J36 20pa black
Is the stamp a regular issue or a postage due? Sometimes the only major hint is the denomination. 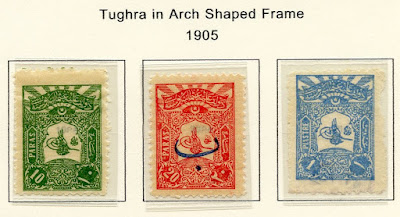 Tughra in Arch Shaped Frame
1905 Issue...or 1906 "Discount" overprint issue?
10pa dull green, 20pa carmine, 1pi blue
Between 1901-1909, there were nine issues. These issues were overprinted/surcharged extensively in 1915-1917. It is helpful if the collector becomes familiar with the looks of each 1901-09 issue, so the 1915-17 surcharged/overprinted stamps can be properly placed.

But what is that horizontal flat "C" blue overprint on the 20pa carmine? (I've purposely placed some stamps in a mistaken space for "teaching" purposes for this blog post.)

"Stamps bearing this overprint were sold to merchants at a discount from face value to encourage the use of Turkish stamps on foreign correspondence, instead of those of the various European powers which maintained post offices in Turkey. The overprint is the Arab "B" for "Behie", meaning "discount"".

These "discount" stamps were initially issued, beginning in 1906. The "discount" overprint can be found also on a number of further surcharged/overprinted issues, so one needs to look for it to correctly identify the stamp.

1908 Issue
The script inside the bottom half of the circle fills in completely, and the script to the right of the Tughra (which is actually part of the Tughra) is wider and fatter.

The 1909 issue reflects the Tughra and "Reshad" of Sultan Mohammed V.

Shown here are, at first glance, stamps that were issued in 1905.

But placed here, "by mistake" is a "discount" 1pi bright blue stamp (See the red horizontal flat "C"?), that is a 1906 stamp issue. The lesson here is one needs to carefully examine the stamps for the "discount" marking, as it may be difficult to see.

But the crescent for semi-postals always is filled in with script. !! Note the 1pi ultramarine stamp does not belong here, as it is a "regular" 1915 issue.

One other "gotcha"- notice the "additional overprint" on the 10pa green? This is another example of a "discount" stamp, which has its own catalogue number. 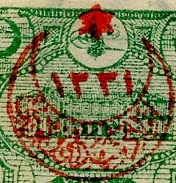 Semi-Postal Crescent overprint: reads "For War Orphans"
Note the filled in script inside the overprinted crescent, which makes this a semi-postal stamp.

1901 Tughra in Oval Foreign Issue
Regular or Newspaper?
5pa bister, 10pa yellow green, 20pa magenta, 1pi violet blue, 2pi gray blue
Turkey also issued many newspaper stamps. From 1901-1917, most of the newspaper stamps produced were similar to regular issues, except they had a dense discrete script overprinted on them.

The 5pa bister and the 10pa yellow green illustrated above are newspaper stamps, and do not belong here among the regular issues.

Close-up of the Newspaper Script Overprint
Newspaper stamps can be found with many additional overprints/surcharges, but if they have this script, then one knows to place them in the Newspaper section pages of the album. 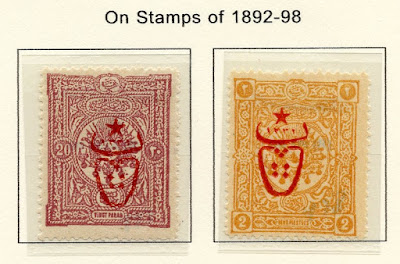 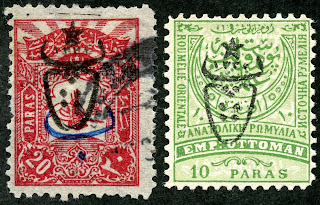 Note, in this case, the overprint was applied to a "discount" 1906 20pa carmine stamp.

And remember "Eastern Rumelia"? Well, if one finds the "apple" overprint on an Eastern Rumelia stamp, it is actually catalogued as a Turkey stamp. ;-)

One other cautionary note: Scott states, with the "apple" overprint, forgeries abound. 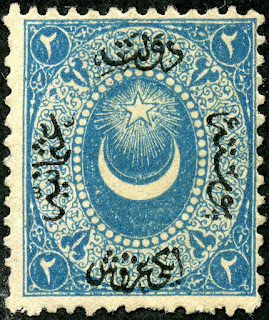 1865 Scott 11 2pi blue
Crescent and Star, Symbols of Turkish Caliphate
Out of the Blue
I now feel ready to tackle the classical Turkish stamps - the "Turkish bath" does not seem quite as hot. I hope you do too.