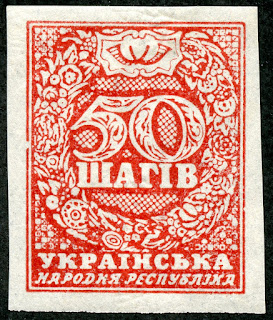 1918 Scott 5 50sh red "Inscription of Value"
Quick History
Ukraine's early classical stamp history (1918-23) is brief, juxtaposed between being part of the Russian Empire since the late 18th century, and the absorption into the Soviet Union on July 6, 1923.

(True, there where some 800 rural local stamps (Zemstvo Stamps) issued in Ukraine at 39 locations between 1866-1917. But these are "local", not national stamps, are definitely in the specialty realm, and I will say no more about them.) 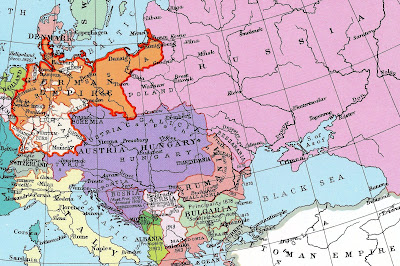 The capital was and is Kiev, and the population was 27 million in 1924. 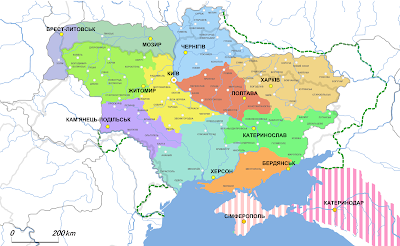 A five stamp set on card stock, but used as money tokens, was released April 18, 1918 in lieu of coins. 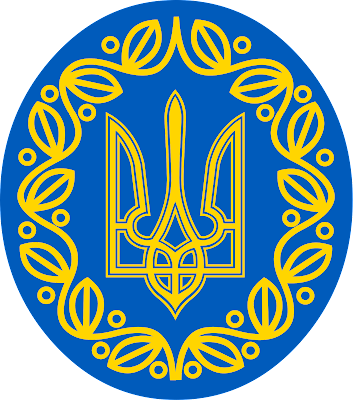 Meanwhile the Bolsheviks set up a rival government in the eastern city of Kharhov (Kharkiv) in 1919. This ultimately became known as the Ukrainian Soviet Socialist Republic.

By November, 1920, Ukraine was occupied by Soviet forces, and on July 6, 1923, the territory was incorporated into the Soviet Union. 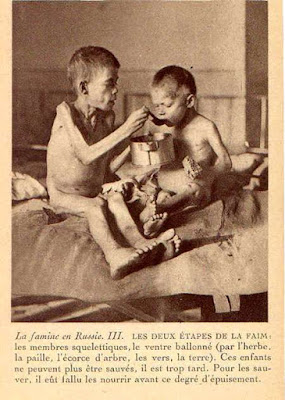 Ukraine remained part of the Soviet sphere until 1991. On March 1, 1992, the newly independent Ukraine again began to issue its own stamps. 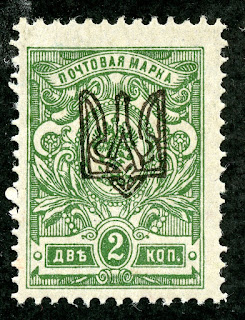 The stamp population CV is a bit bi-modal. There are the 40 inexpensive stamps.  But the Kharkiv issues (1920 Ukrainian and Russian stamps handstamped surcharged) during the Ukrainian Soviet Socialist Republic era are fairly expensive, and really specialist's territory. Along with the expensive 1922 Kyiv issue, I will say no more about them here.

BTW, Scott has a separate section for Western Ukraine, so those issues will be covered in a future blog post.

The big challenge for those interested in classical era Ukraine philately are the many Trident overprints on Russian stamps.

One, of course, can collect simply- one of each of the 39 different perforate and imperforate Russian stamps with a Trident overprint.

Or, one can collect the various types of overprints from the six postal districts (Kiev, Poltva, Katerynoslav (Dnipropetovsk), Kharkiv, Odessa, and Podillia). Specialists have identified ~75 basic overprints with ~50 variants. Each overprint was used on ~20 stamp values, and there are, therefore, ~1,500 Provisional trident overprint stamps that can be collected. !!!

The Scott Classic Specialized 1840-1940 catalogue has some 19 major overprints identified, and lists some 500 minor numbers for these Trident overprints. Many are quite inexpensive.

Unfortunately, there are numerous forgeries of the Tridents.

If one is interested in pursuing further, joining the Ukrainian Philatelic and Numismatic Society would be an excellent idea.

Speaking of forgeries, the so called Shahiv issue (July, 1918-five stamps, Scott 1-5), which is quite inexpensive in the catalogue even today, was forged early on for the packet trade (forger unknown).

I happen to have three examples of the forgeries, and will compare them with the genuines in the immediate next section. 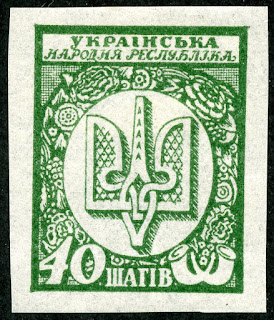 On July 18, 1918, five typographic stamps were released for postage use, imperforate, and on thin paper.  The independent Ukrainian National Republic (also called, somewhat confusingly, the Ukrainian People's Republic) had earlier (April 18, 1918)  released these designs on 11 1/2 perforated card stock for use as currency. They were designed by Antin Sereda (10 & 20 Shahiv denominations), and Yuriy Narbut (30 & 40 & 50 Shahiv denominations). Narbut was a major artist, and president of the Kiev Ukrainian Academy of Arts.

This imperforate issue was in wide use until the end of 1920. (A few were privately perforated.) 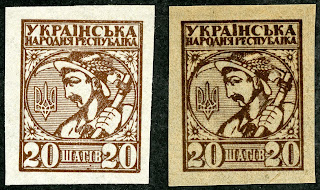 1918 Scott 2 20sh brown "Ukrainian Peasant"
Genuine & Forgery
A fly in the ointment with collecting these issues is there was a forgery produced early on for the packet trade for all five denominations. The good news, according to Varro Tyler ("Focus on Forgeries"- c2000), is there is only this one single forgery for the issue. He illustrates two forgeries (the 20 & 30 Shahiv), which I will also show here. But I additionally have the 10 Shahiv denomination as a forgery, and will illustrate it here too.

The paper used for the forgery is brownish, thin and transparent, rather like aged glassine. The genuines, though, are also on thin paper, but white. 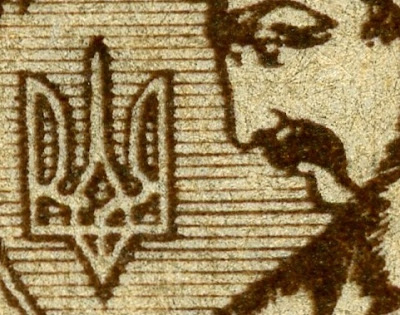 And finally, the trident symbol in the forgery has a line break in the central portion of the "Y". No such break exists in the genuine. 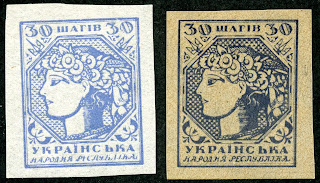 And the nostril line is curved and longer in the genuine, compared to the short dash seen on the forgery. 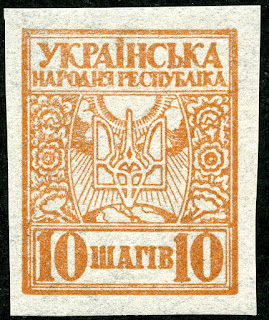 1918 Scott 2 10sh buff
"Republic's Trident Emblem"
I also have the 10 Shahiv forgery that is not illustrated by Tyler. But then the question becomes which is the genuine, and which is the forgery, as they both are equally crude in appearance? ;-)

Well, this specimen is on white thin paper, characteristic of genuines.

And, after examining the illustration for the 10sh in the Scott catalogue, this appears to be the genuine example.

( I should say, though, that catalogue illustrations are no guarantee. I have notified Scott in the past about forgery illustrations masquerading as genuine. To their credit, they acknowledged the error, and it was changed. No such acknowledgement from SG. As far as I know, they still illustrate a Type I Forgery for the Batum 1919 SG 4 1r chocolate "Aloe Tree".) 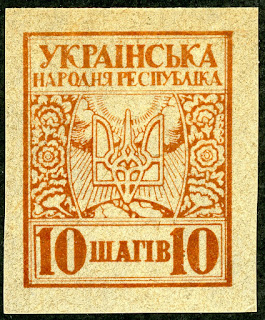 1918 Scott 2 20sh brown Genuine close-up
The genuine has the diamond shape filled in within the trident. The flower design on the right is heavily filled in also around the center.

1918 Scott 2 20sh brown Forgery close-up
The forgery  does not have the diamond shape within the trident filled in. The flower design on the right is also not filled in around the center. 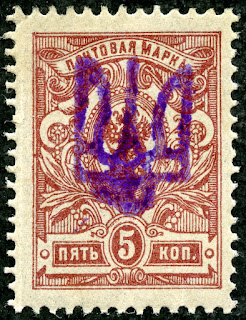 As mentioned earlier, specialists have found some 1500 trident stamps, based on the various overprint types.

Many are at minimal CV, while others command a CV price in the hundreds.

The Scott catalogue lists some 500 minor numbers for the tridents, with 19 major overprints identified. These overprints are from six postal districts- Kiev, Poltva, Katerynoslav (Dnipropetovsk), Kharkiv, Odessa, and Podillia.

Here I show a perforated Russian 5k claret, which appears to be handstamped in violet.

This most closely resembles a Kiev II overprint, as these are found in violet. But the overprint does not exactly conform to the one illustrated in Scott.

Is this another type of overprint or variant? (Possibly.)

Could this be a smudged version? (Yes, the rubber devices used quickly deteriorated.)

Could this be a forgery? (Possibly, but the CV <$1, and forgeries are more prevalent with expensive CV stamps.)

Truth be told, I have reached the end of the line here without diving into a specialists fascination with these Tridents. ;-) 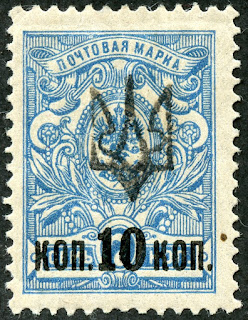 1918 Scott 27a 10k on 7k light blue, Perforated
On Russian Stamps of 1917
Regional Issue Katerynoslav I
Handstamped in black with a rubber device
Fortunately, many of the tridents can still be positively identified using the Scott 1840-1940 catalogue. Thus is, no doubt, a Katerynoslav I regional issue. 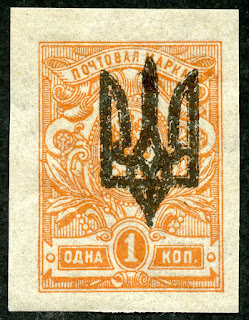 Perhaps someday I will revisit the tridents, and do a more through (specialist) evaluation.

If this introduction to the tridents has whetted your appetite for more, I should mention one of my favorite blogs on the Russian Area and East European Philately- Trevor Pateman's Philately Blog. 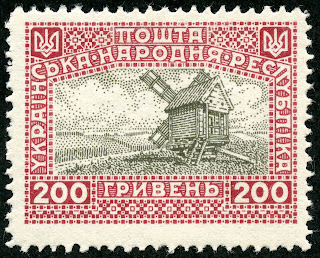 1920 Scott "169" 200 hryven claret & gray "Windmill"
Scott "156" to "169" were never placed in use
A lithographed pictorial and portrait set of fourteen stamps was prepared in 1920, but never placed in use. The Ukrainian Government-in-Exile, from Tarnow, Poland, on August 27, 1919, wished to provide a new definitive issue. These were eventually printed by the Austrian Military Geographic Institute of Vienna, Austria toward the end of 1920. But alas, too late to be put in use as history had moved on.

The set clearly was well dispersed through stamp circles, as many feeder albums will have them. Big Blue '69 still has spaces for the set, as well as Steiner. As the issue was never placed in use, Scott has withdrawn the numbers in the present catalogue. 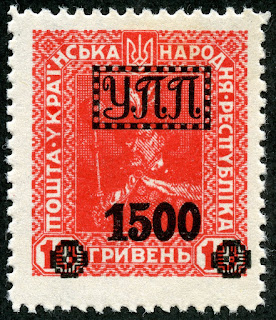 1923 Ukrainian Government in Exile Stamps
Surcharge on 1920 Scott "160" 10gr rose red
"Bogdan Chmielnicki"
Issue was never released or used
Similarly, the Ukrainian-Government-in-Exile overprinted/surcharged the "never placed in use" 10h, 20h, & 30h 1920 set in 1923 for a Field Post issue (11 stamps) for a planned invasion of the Ukraine. This never happened either. 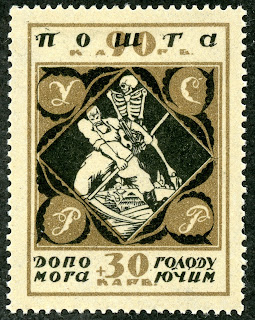 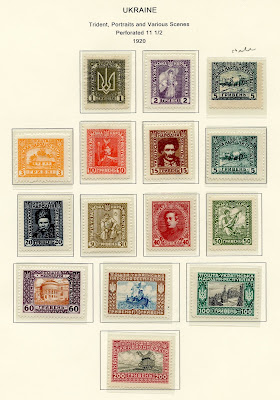 1920 Issue in Deep Blue
Never placed in use
Deep Blue (Steiner) has seven pages for the classical era stamps of Ukraine.

The coverage include two pages (perforate plus imperforate) for the 1920 set (illustrated above) that was never placed in use, and has no current Scott numbers assigned in the catalogue.

The coverage does not include the "never placed in use" 1923 Ukrainian Government in Exile issue. I added a quadrilled page for those stamps.

The coverage only includes a basic (major number) stamp space for all the many Trident regional overprint (minor number) types. I added a separate quadrilled page for those.

My Steiner does not have coverage for the 1920 Kharkiv and Kyiv issues, nor the 1920 Courier Field Post issue. These are in the 2014 Scott 1840-1940 catalogue- perhaps Steiner will add coverage later?
No matter- this is specialist territory anyway. ;-) 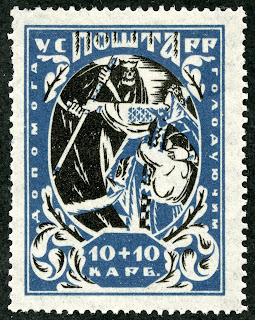 1923 Scott B1 10k + 10k gray blue & black
"Famine"
Ukrainian Soviet Socialist Republic
Big Blue
Big Blue '69, on one page, has 30 spaces for Ukraine stamps. Of the spaces, 14 are for the "never placed in use" 1920 issue (They no longer have active Scott numbers). That leaves 16 spaces. Coverage then (reflecting the current catalogue) is 14%.

The coverage consists of seven spaces for the 1918 Trident overprints, the 1918 Shahiv issue, the 1920 issue (discussed above), and the 1923 "Ukrainian Soviet Socialist Republic" semi-postal issue.

There are no expensive (Threshold $10) stamps. 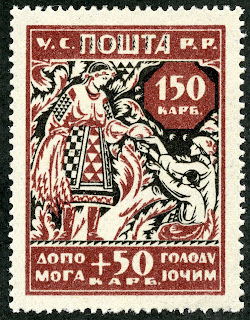 1934 Scott B4 150k + 50k red brown & black
"Ukraine" Distributing Food
Out of the Blue
Ukraine's philately is highly attractive for both the WW collector and the specialist. I thoroughly enjoyed the investigation.

Note: Maps, Trident & Coat of Arms scan, and "starving children" scan pic all appear to be in the public domain.