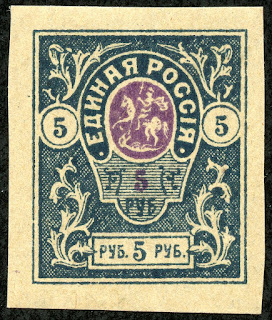 1919 Scott 69 5r slate & violet "St. George"
Denikin Issue
Quick History
"South Russia", in southern Russia next to the Caspian and the Black Seas, was an area where the White forces under General Denikin set up a provisional government in opposition to the Bolsheviks and the Red Army during the Russian Civil War of 1918-20. 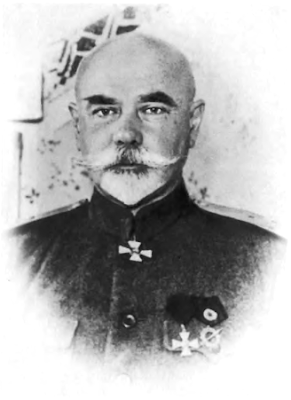 Anton Denikin
The anti-Bolshevik Volunteer Army was formed by Generals Mikhail Alekseyev,  Lavr Kornilov and Anton Denikin in Novocherkassk in the Northern Caucasus during December, 1917. Kornilov was killed in April, 1918, and the Volunteer Army, specifically the 1st Division, was then lead by Denikin. 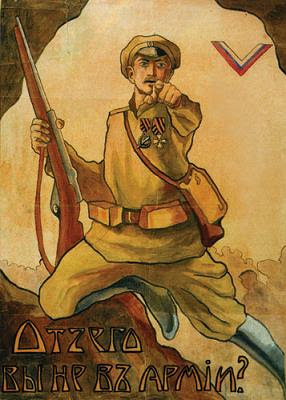 "Why aren't you in the army?"
Volunteer Army recruitment poster during the Russian Civil War.
I don't pretend to know much about the complicated history of the 1918-20 Russian Civil War. Other armies include the Don Cossacks, the Kuban Cossacks, and in 1918, the "Armed Forces of South Russia"- (The later name for the "Volunteer Army")- under the command of General Denikin. 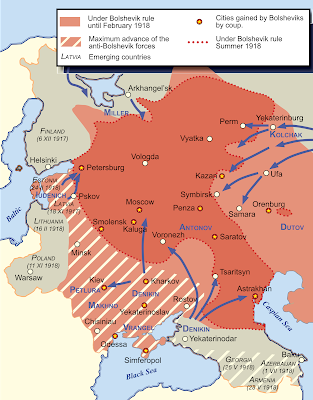 Russian Civil War
In early 1919, Denikin defeated the 11th Soviet Army and occupied the North Caucasus area. In June, 1919, he advanced toward Moscow. 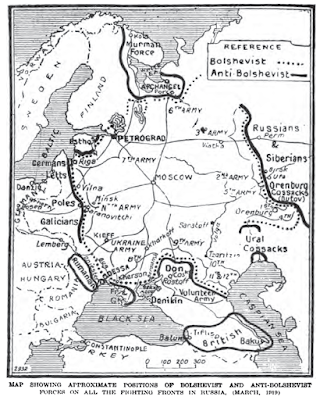 Bolshevist/ anti-Bolshevist positions, March, 1919
After the October 1919 Red Army counteroffensive, the Volunteer Army retreated to the Crimea by March, 1920 - merging with the army of General Pyotr Wrangel.

(For more on these turbulent times, see the fine posts at Dead Countries Stamps website.)

For philatelists, the "Fog of War" left tangible pieces of evidence: Stamps issued by the White forces, and used for field postal operations. 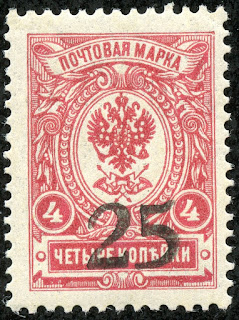 The most difficult thing for the collector may be just recognizing the stamps, as they give little clue, save for the Denikin issue, of their origin. That is because they mostly consist of surcharges on 1909-17 Russian stamps. !

Even if many of the stamps do not have much catalogue value, most (all?) have been overprint forged. So Caveat Emptor- do not pay much for these stamps, unless one is dealing with a reputable source. 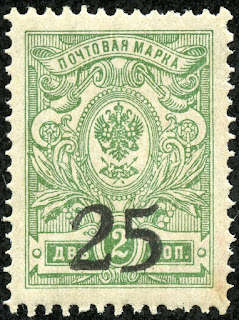 1918 Scott 2 25k on 2k dull green
Russian Stamps of 1909-17 Surcharged
Don Government (Novocherkassk): Rostov Issue
The "Rostov issue" is covered first in Scott, and is from the Don Cossack Republic 1918-20. Presumably, it  was issued in Rostov (See maps).

These stamps and the Kuban Cossack stamps tend to be found wandering aimlessly in the "Russian" section of albums, as many collectors have no idea who issued them. 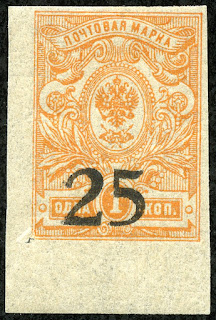 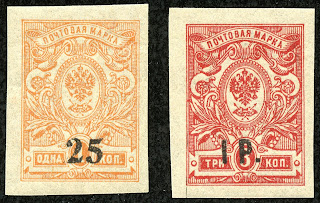 Novocherkassk Issue
Russian Stamps with these surcharges are "bogus"
Scott has a note about "bogus surcharges". Here are two examples. 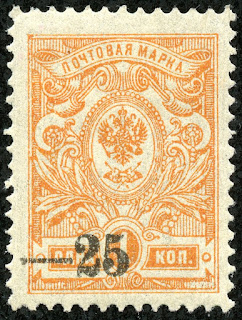 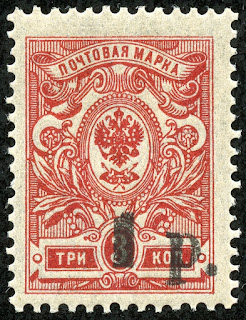 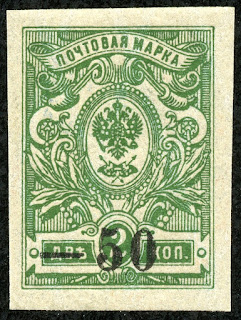 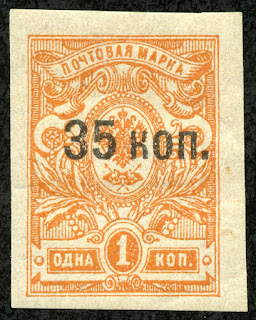 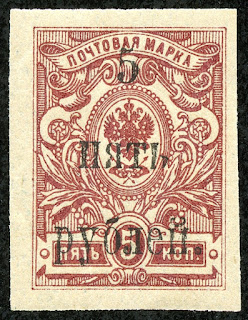 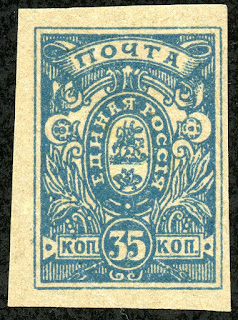 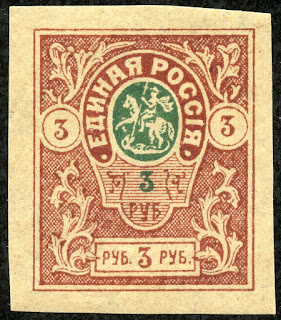 These are attractive stamps and the imperforate set ranges from CV <$1-$2+. 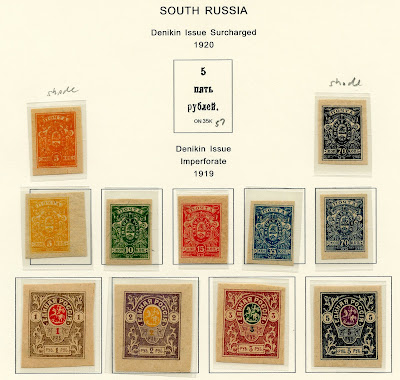 1919 Denikin Issue in Deep Blue
Deep Blue (Steiner) has four pages for the issues of South Russia, and includes a space for all major Scott numbers. 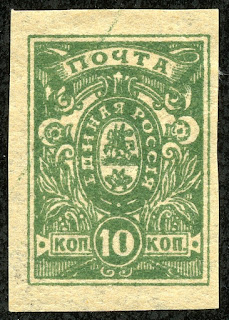 1919 Scott 62 10k green
Denikin Issue
Big Blue
Big Blue '69, on two lines of one page (shared with Western Ukraine), has 10 spaces for the stamps of South Russia, all for the 1919 Denikin issue.  Coverage is 18%. The coverage is all or nothing: The entire Denikin issue, save for the 7r denomination, is given a space, but none of the surcharged issues are given any room. A pity, because these surcharged stamps are often left as unrecognized orphans in BB feeder albums.

There are no expensive ($10+) stamps required.

The other question one might ask is, why is "South Russia" stuck in the '69 Big Blue between a couple of "W" countries, Western Ukraine and Wurttemberg?

The '69 edition editors decommissioned "White Russia"- as their stamps no longer appeared in the Scott catalogue. Hence, "South Russia" was moved from between Saxony and Senegal in the 1940s editions to reside where "White Russia" had been located.  ;-) 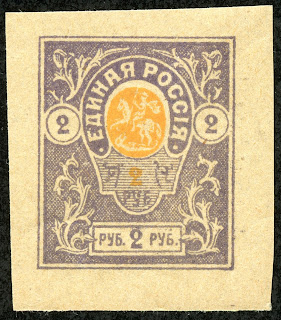 1919 Scott 67 2r gray violet & yellow "St. George"
Denikin Issue
Out of the Blue
For those seriously interested in the Russian Philatelic area, I would be remiss if I did not mention the fine informative blog by Trevor Pateman.

Note: Maps, poster image, and Denikin pic all appear to be in the public domain.